A look at how I put together my WandaVision Disneybound: 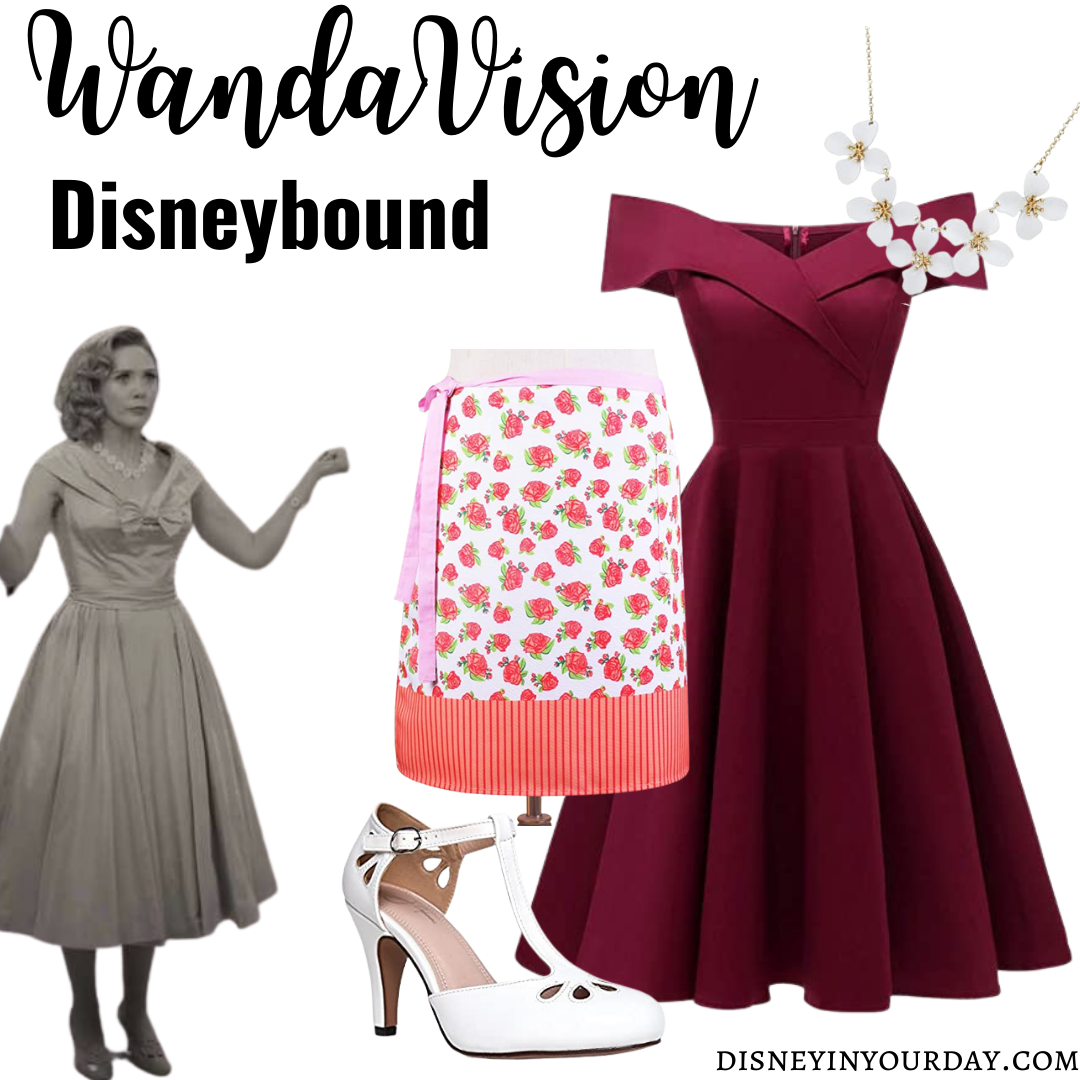 I don’t know about you, but I’ve been hooked on WandaVision since the first episode came out. I’m super excited for the finale this week, though I’m a little nervous about how emotional it might make me! I know some people didn’t love the first few episodes with their sitcom styles through the decades but for me it was full of nostalgia.

I grew up on TV Land and all of the old sitcoms. I’ve probably seen every episode of I Love Lucy, Mr. Ed, Gilligan’s Island, The Andy Griffith Show, and Bewitched. So episode 1 of WandaVision had my cracking up at the corny sitcom situations and loving the happy, silly feel of those shows. And I’m a big fan of retro fashion too, so the costuming was very cool to see as well! 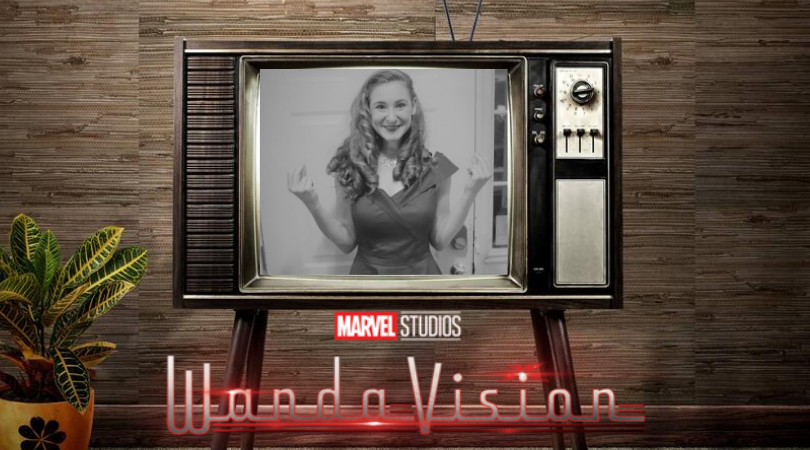 Which was why I knew I had to try and create Wanda’s look from this first episode. I chose to do her fancier dress that she changed into for the dinner with this WandaVision disneybound. (If you’re not familiar with what Disney Bounding is, you can read about it here. )

One of the trickier things with this one is that the episode is all in black and white, so I didn’t know colors for things. I searched for images of them filming but did not initially find anything so I made a few of my own decisions – remember, Disneybounding doesn’t have to be exact, just inspired by the character! It’s not a costume. The major one was the color of her dress. I had a feeling it was a lighter color since it’s more of a light gray than dark, but I decided not to go that route. Since she is the Scarlet Witch, after all, I went with red. If you want to be more accurate it turns out the dress is light pink.

I had so much fun with this one I’m kinda tempted to do the rest of her outfits through the decades!

Here’s a look at how I put together my WandaVision Disneybound (1950s style): 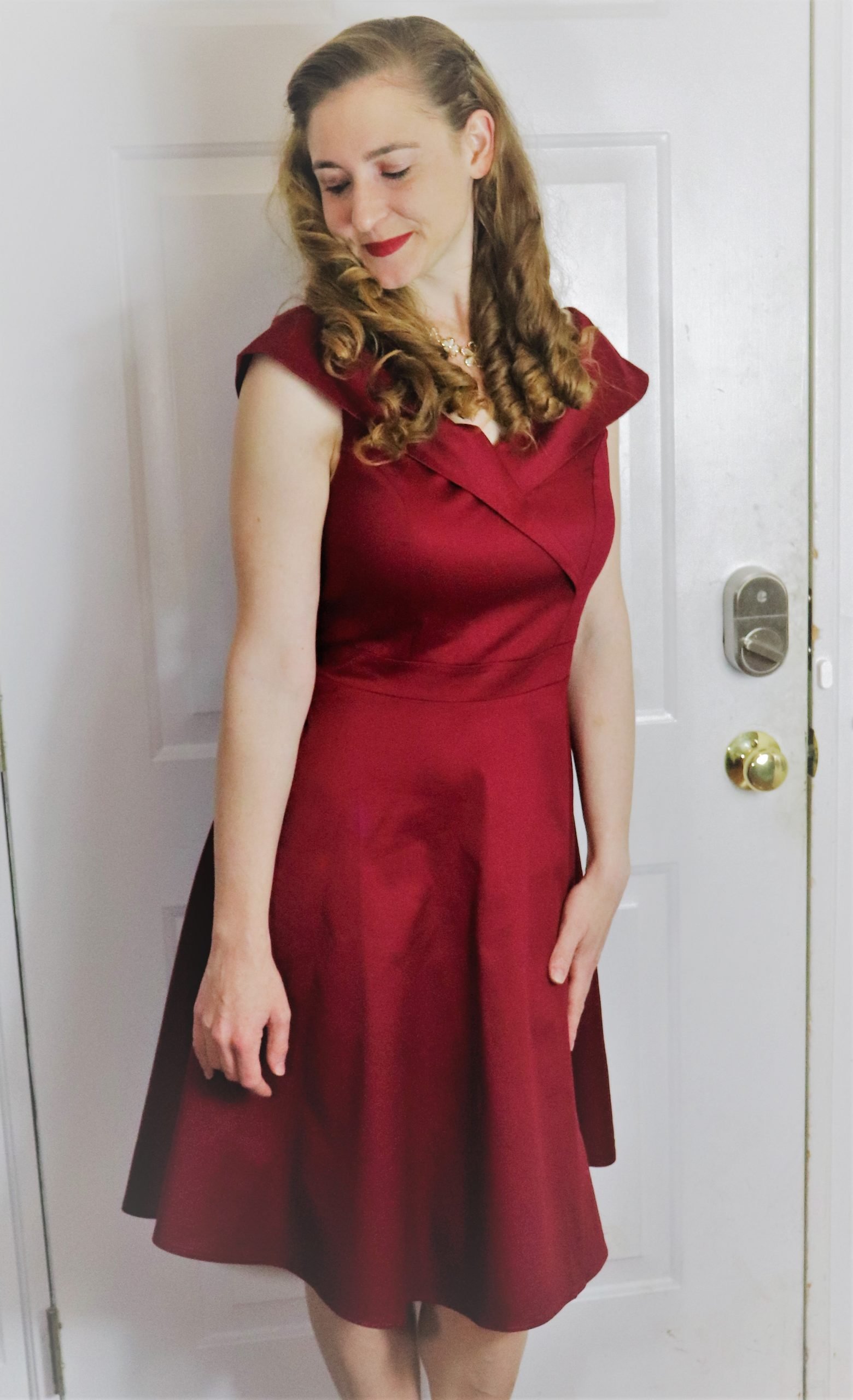 Like I mentioned, I love 1950s style so I already had a bunch of dresses saved in my Amazon wishlist (I was similarly inspired for my Disgust disneybound). I was flexible on the color (though I was aiming for something in the red/pink family) but didn’t want anything patterned. What I focused the most on was the style of the sleeves and shoulders. I wanted that sort of wrap style she has. I couldn’t find anything with both that style sleeve and with the bow so I chose to forgo it and went with this “wine” colored dress. But there are plenty of options that give off the same sort of vibe! You could also go in another direction that I considered and get a gray dress in homage to the black and white episode. 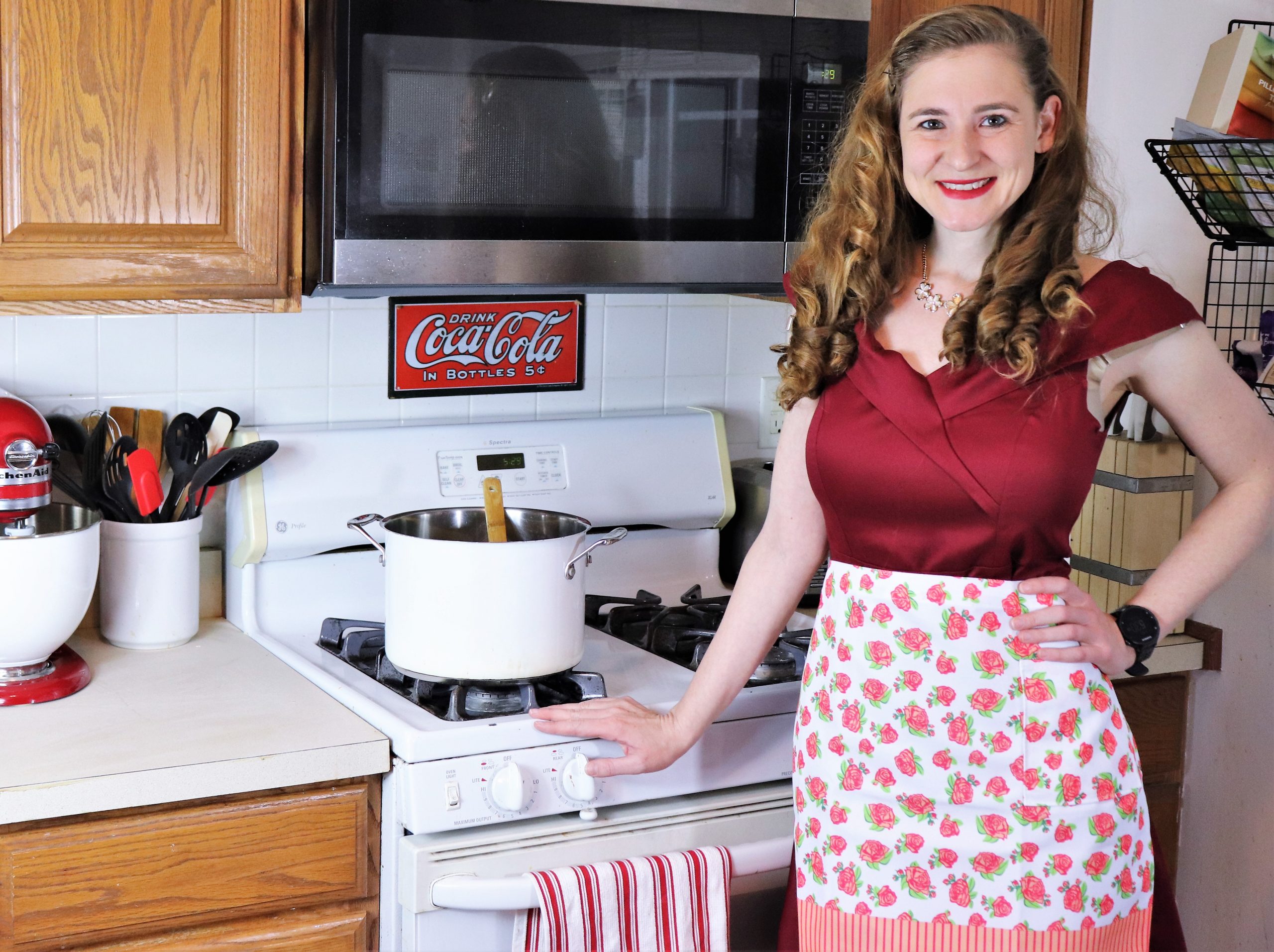 Wanda wears an apron for part of the episode with this dress, when she is in the kitchen attempting to cook dinner. The apron looks like it has a floral pattern from watching the episode, and it’s a half apron at the waist. I chose one that would go with my color dress, so I found one with red roses on it and stripes at the bottom which makes it feel a little more “retro” to me. I wore it for some of the photos we did and then took it off for the others. 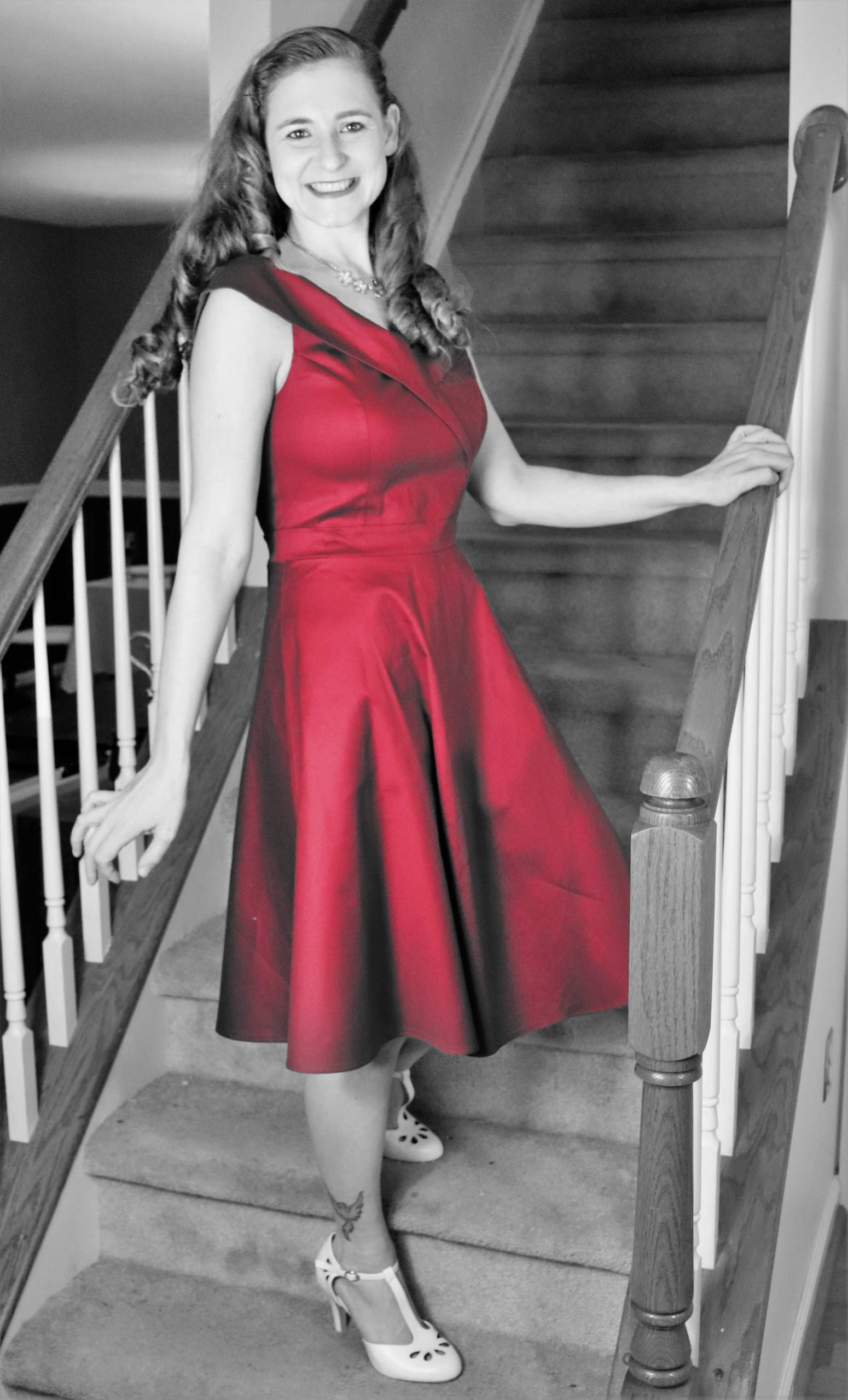 We only got a few glimpses of Wanda’s shoes in the episode, but they looked like typical retro heels with a bow on them. I’m not a big bow person myself (and I had already picked a dress without a bow) so I looked at other options. I wanted a neutral color so I can use the shoes again for another outfit – because you know I’m going to find an excuse to create a 1950s look again sometime! So I was considering white or beige. I liked the look of this pair because they had some detailing that was fun rather than being too plain. You could go neutral or get something to match the color o your dress. 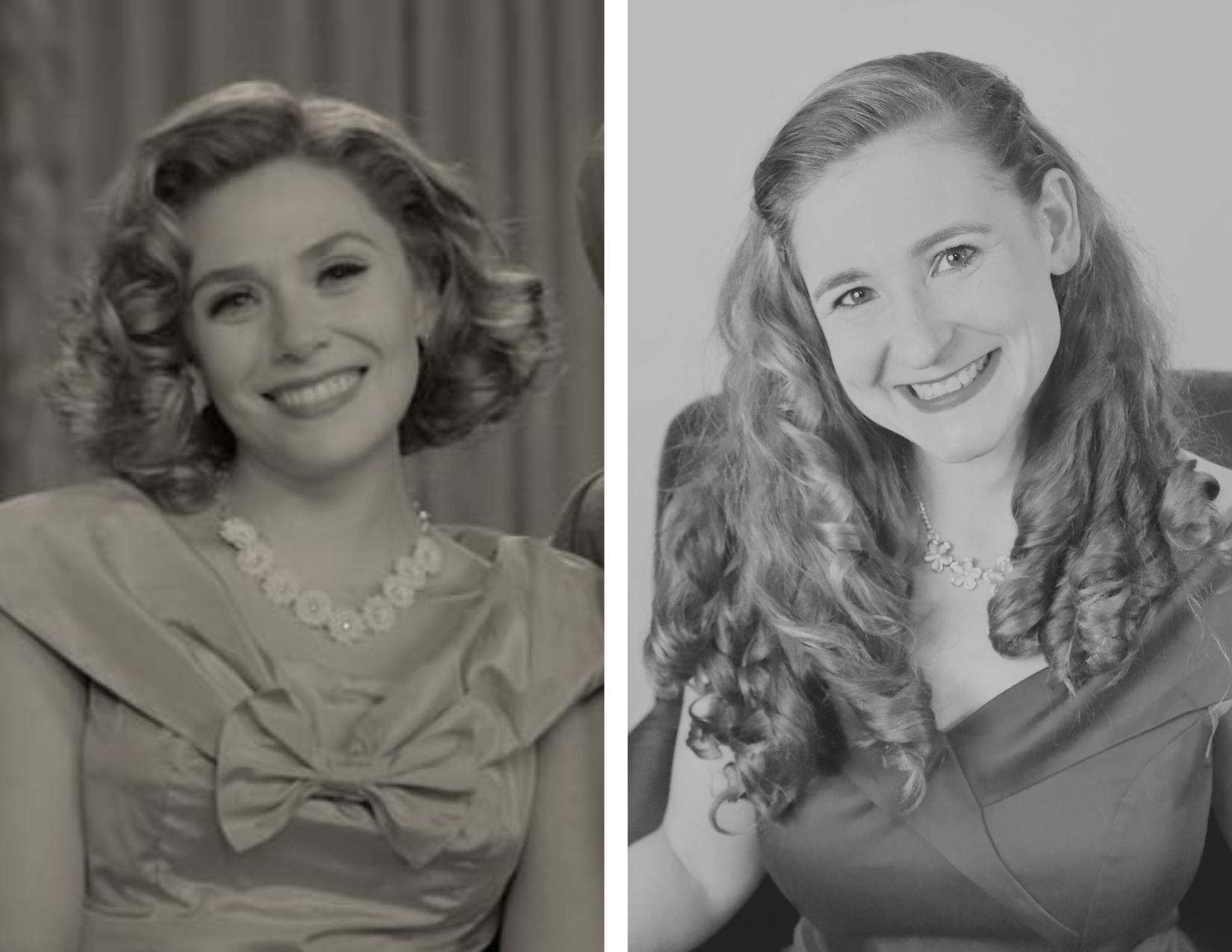 Wanda wears a pretty distinctive floral necklace in this episode (I don’t know if there’s any significance behind it, someone who knows more about the MCU might know!). It’s a floral chain and looks like daisies. After examining options I went with this one – it’s not the same exact style of flower but it looks like something I might wear again. She also has matching earrings but I can’t wear earrings of any kind due to an allergy. 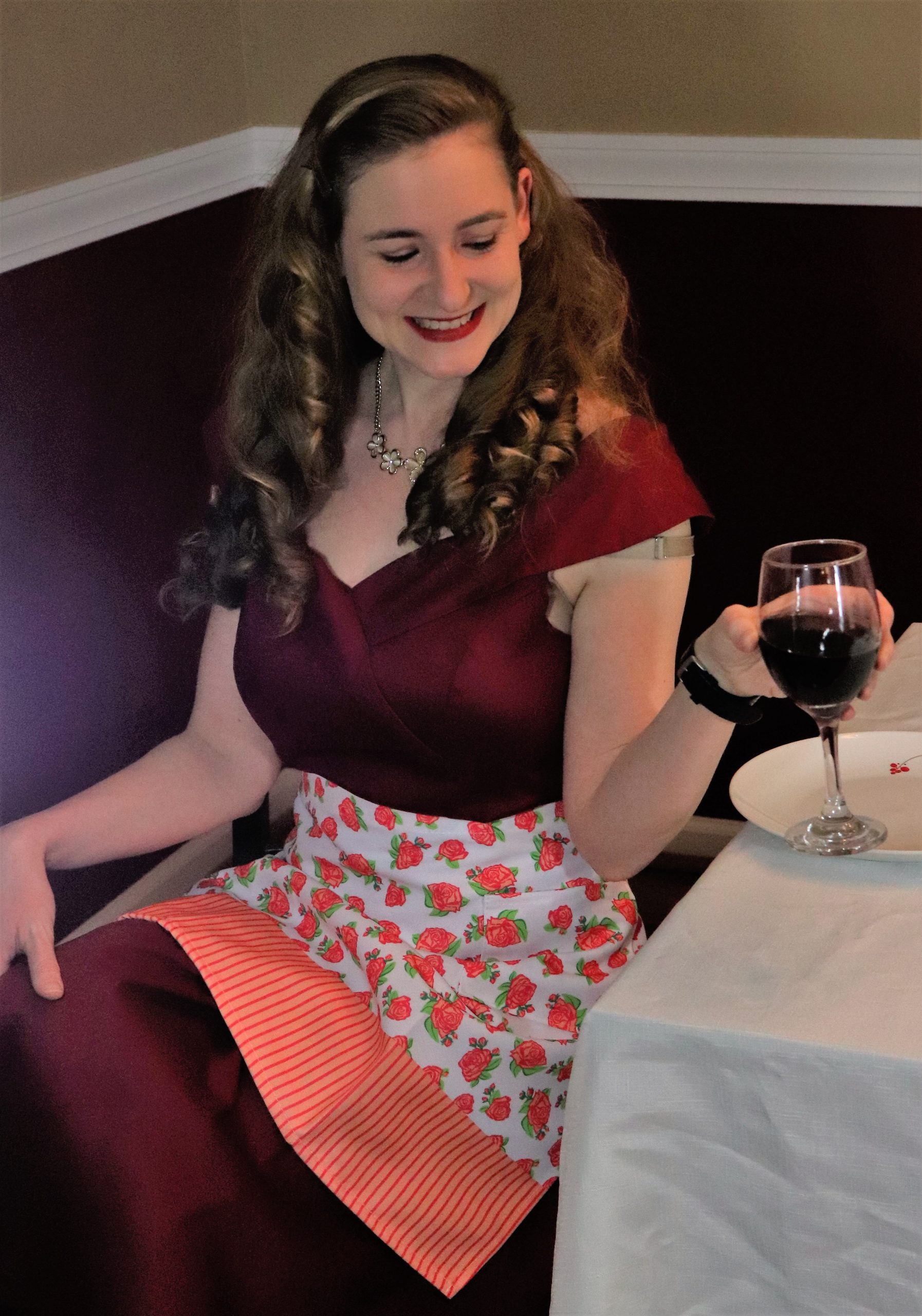 My hair is longer than Wanda’s, but I still tried to curl it in a 1950s style. I’m not an expert at this stuff – I just do my best to curl it really tightly and then pin it and spray it. I am not a makeup expert by any means and mostly use very basic stuff with some fun lip and eye colors. If you’re wondering, my eyeshadow is from a Jasmine inspired palette I have and my lipstick is from Besame Cosmetics, the color Sweet Dreams from the Agent Carter Collection (no longer available but they have many similar styles and colors).

Tips for the perfect WandaVision Disneybound 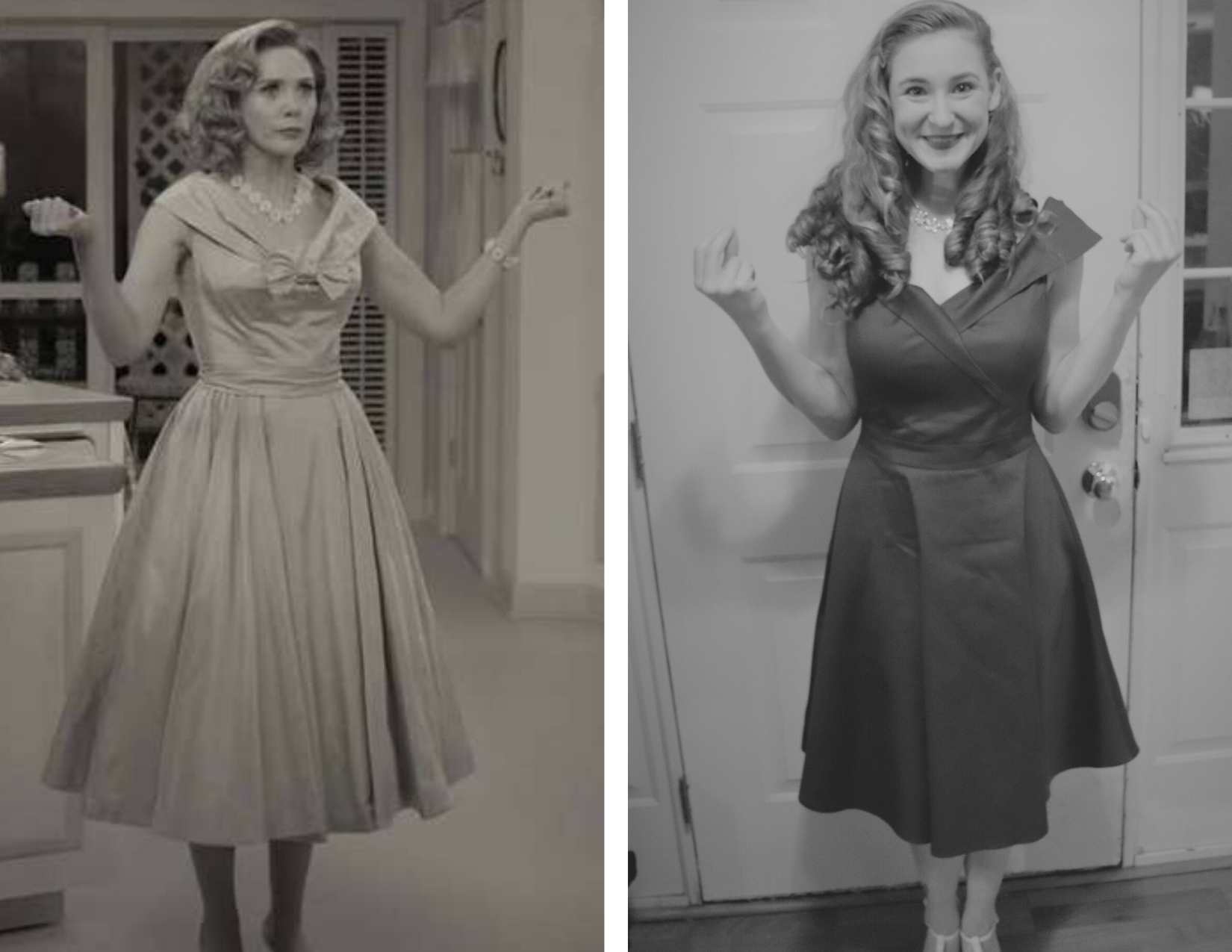 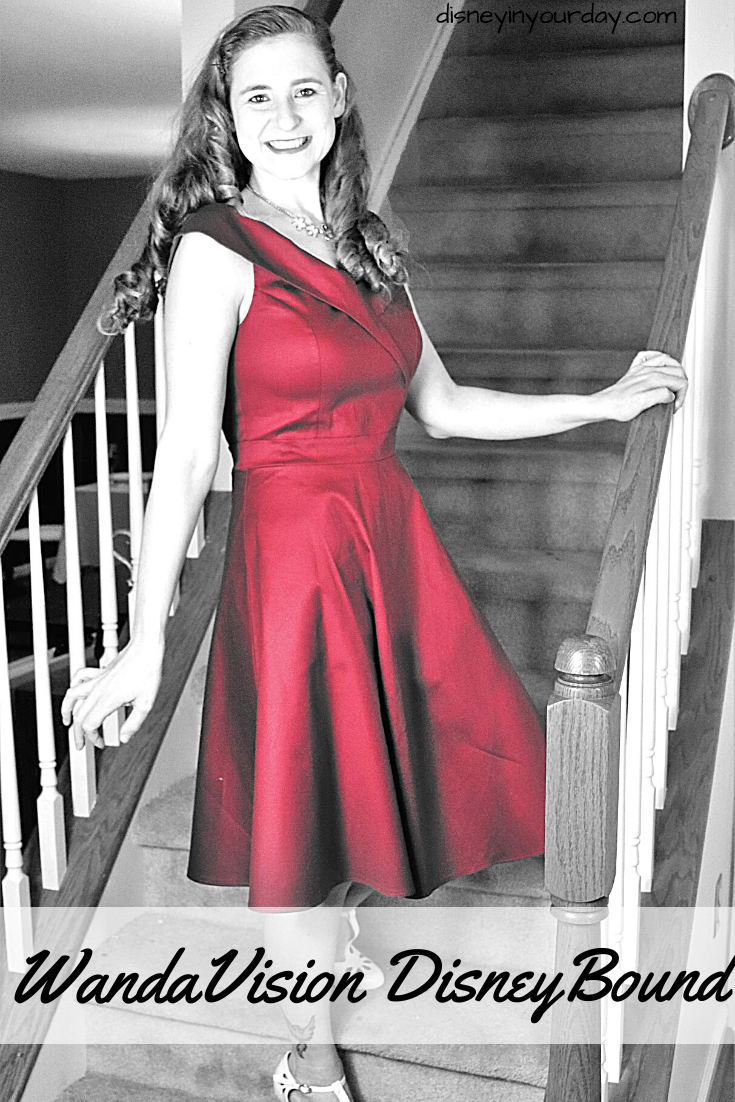 What do you think of my WandaVision Disneybound? Should I try more of these?