Read on to see the items on my Disney Bucket List!

A number of years ago I sat down and wrote out my own Disney Bucket List, and shared it on the blog Come Home to Disney.  But since then I’ve added things to the list and I wanted to give you updates on my progress for each item.

Even though I’ve been to Disney numerous times, there are still lots of things I really want to do there.  Here is my list, including what I’ve already done from it… and I’m sure it will grow as time goes on too!  In later blog posts I hope to share some details about the ones that I’ve checked off and what my experiences were like.

In addition, I am constantly adding to this list and modifying it – I’d also love to hear what’s on your own Disney Bucket List!

1.  Eat at every Disney restaurant
According to my calculations, I’ve been to 37 out of the 72 table service restaurants at Disney.  I still have a lot to go!  See how many you’ve done with this checklist.

2.  Stay at every Disney resort
I’ve stayed at 15 so far (Art of Animation, Pop Century, All-Star Movies, All-Star Music, All-Star Sports, Port Orleans Riverside, Caribbean Beach, Animal Kingdom Lodge, Grand Floridian, the Boardwalk, Saratoga Springs, Coronado Springs, Port Orleans French Quarter, Contemporary resort, and Old Key West).  There are currently 20 so I have 5 to go!  However, in December that will go up to 21 when the Riviera resort opens. In addition, I made a checklist for this too!

3.  Have afternoon tea at the Grand Floridian (check!)
Completed in February 2013!

4.  Tackle the Kitchen Sink at Beaches and Cream (check!)
Completed in February 2013!

5.  Visit during Epcot’s Festival of the Arts (check!)
Completed February 2019!

8. Take 10 Disney tours
I’m up to the 5 above as well as Keys to the Kingdom. Hoping to add more in the next few years!

11.  Visit during the Food and Wine festival (check!)
Completed in October 2014!

12.  Visit during the Flower and Garden festival (check!)
Completed in April 2013!

15.   Play mini golf at Fantasia Gardens or Winter Summerland
Would love to try this!

16.  Have a waffle sandwich at Sleepy Hollow (check!)
Nutella and fruit – delicious!

18.  Visit Jellyrolls on the Boardwalk (check!)
Completed in September 2017!

19.  Visit one of the Disney spas
I could probably convince myself to get a massage after a RunDisney event…

22.  Get a haircut at the Main Street barber shop
No plans for a haircut soon, but definitely something to do someday!

23.  Stay in a royal room at Port Orleans Riverside (check!)
They look amazing in the photos, and POR is one of our two favorite resorts.

26.  Attend Dapper Day
This unofficial Disney event sounds like a lot of fun!

29.  Take a private fireworks cruise
This would be an incredible event for a special occasion, in addition to just being a really cool experience.

30.  Renew my wedding vows at Disney World
Perhaps for a 20th anniversary?

32.  Eat at the chef’s table at Victoria and Albert’s
Another one that will probably be saved for a big special occasion.

36.  Complete a Run Disney Half Marathon (check!)
Completed Princess in 2015, and more to come!

39.  Participate in Every RunDisney race weekend
I haven’t done Star Wars or Wine and Dine yet!

40.  Stay at the Camp Wilderness campgrounds
We’ll have to rent or borrow a camper/RV, but I’d love to try this – especially at Christmas time!

41.  Try everything on my Disney “must eat” list
There are so many things I want to try I had to write them all down.

42.  Eat something from every booth at the Food and Wine festival (check!)
Completed in September 2017!

43.  Be in Disney World on my Birthday
My birthday is April 12th, so one of these years I’ll have to plan an April trip.

45.  Do a Disney VIP Tour
They’re expensive, but it would be cool to try. 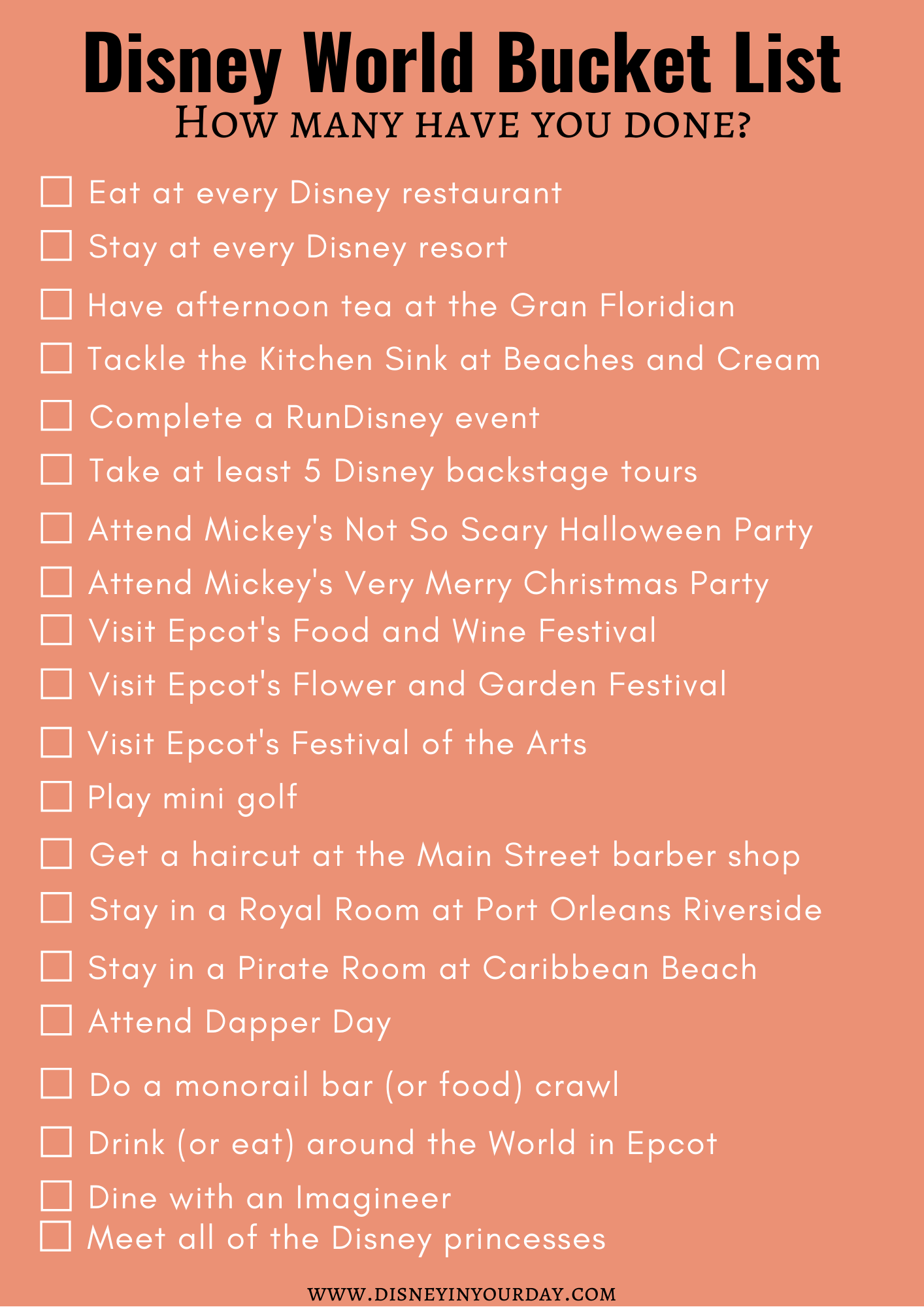 47.  Do an in-park Disney photo shoot  (check!)
Completed in September 2015 at Disneyland!

49.  Draw 15 different characters at the Animation Academy
I’m up to 7, and I’ve heard there are many as 45 different ones that you can get!

53.  Sail on all 4 Disney ships
I’ve done the Magic, the Dream, and the Wonder. Just need to get on the Fantasy!

54.  Take a Halloween on the High Seas cruise
Halloween would be so cool on board!

55. Take a Merrytime Cruise at Christmas
I can only imagine how magical it is around Christmas.

56.  Watch every Disney full length animated feature (check!)
Working my way through and finally watching Bolt, I have achieved this goal in May 2020!

58.  Visit Aulani
I would love to visit Hawaii, but it’s expensive!  Perhaps later in life for a big anniversary trip.

59.  Participate in the Disneyland Paris Half Marathon (check!)
Completed in September 2016!

60. Visit the Walt Disney Family Museum
It’s in San Francisco, but maybe I’ll get there someday.

61. Visit Tokyo Disney resort
Not sure when I’ll get to Japan, but it looks awesome.

62. Visit Walt Disney Studios in Burbank (check!)
We were able to do a tour and it was an amazing experience!

63. Visit Hong Kong Disneyland
Once again, this may not happen for awhile.

64. Visit Shanghai Disneyland
Also sometime far off in the future.

65.  Take an Adventures by Disney trip
I’ll need to save up, but it would be fun.

Of course, everyone’s bucket list will be different, so on mine I only included things that would be appealing to me.  For instance, I know that some people like the idea of “visit all 4 parks in one day”.  But that isn’t really something I’m interested in doing because I feel like I’d be running around a lot just to say I did it, and not doing it because I’d actually enjoy it.  But if that’s something that sounds awesome to you, then add it your list!

Thinking about a trip to Disney World? Check out my Ultimate List of Disney World planning resources to get you started. If you’d like the assistance of a travel agent at no extra cost to you, email me at [email protected] and we can start planning and booking your trip!

What do you have on your Disney bucket list?