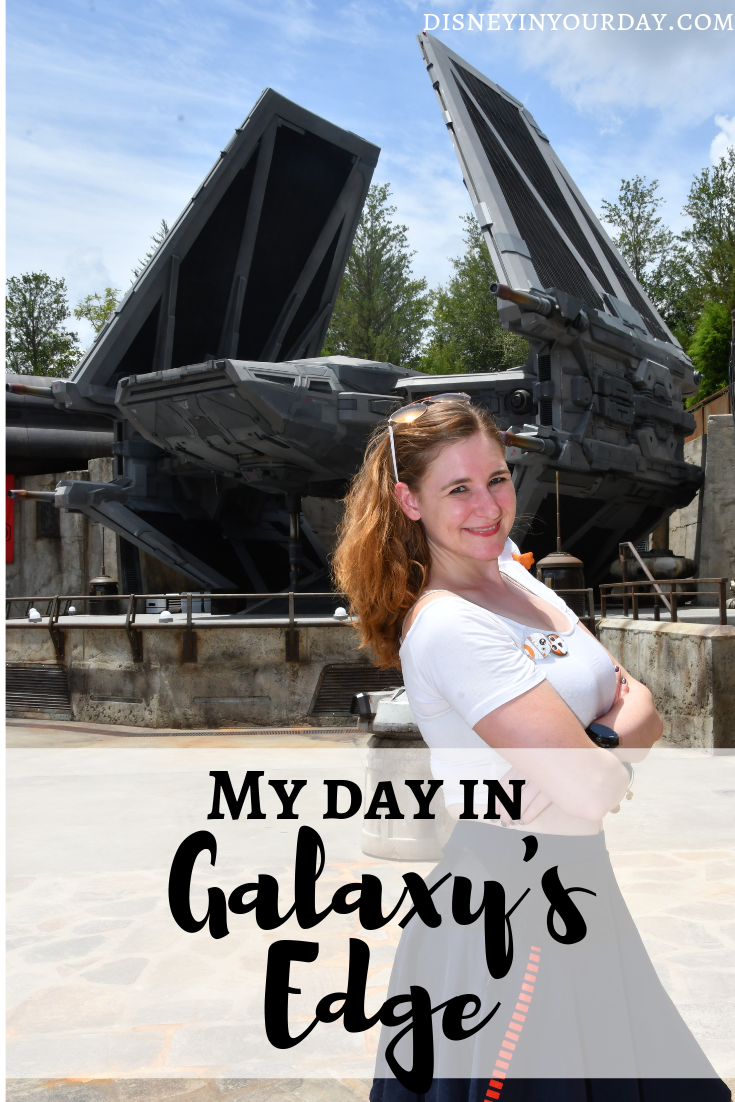 This past weekend I had the opportunity to visit Star Wars: Galaxy’s Edge in Disney World’s Hollywood Studios! They are doing annual passholder previews now, and the land will officially open on August 29th. I got to the park around 9 (my reservation was from 11-3), so I decided to ride Star Tours first! It was fun as always, and in the shop I bought a shoulder porg. He was so adorable!

I checked in early for my reservation around 10:15 and they let me right in! I had signed up for the reservation that included Oga’s Cantina, and they handed me a card to be there at 10:25.  So I went in, took some photos, and then headed straight to Oga’s! 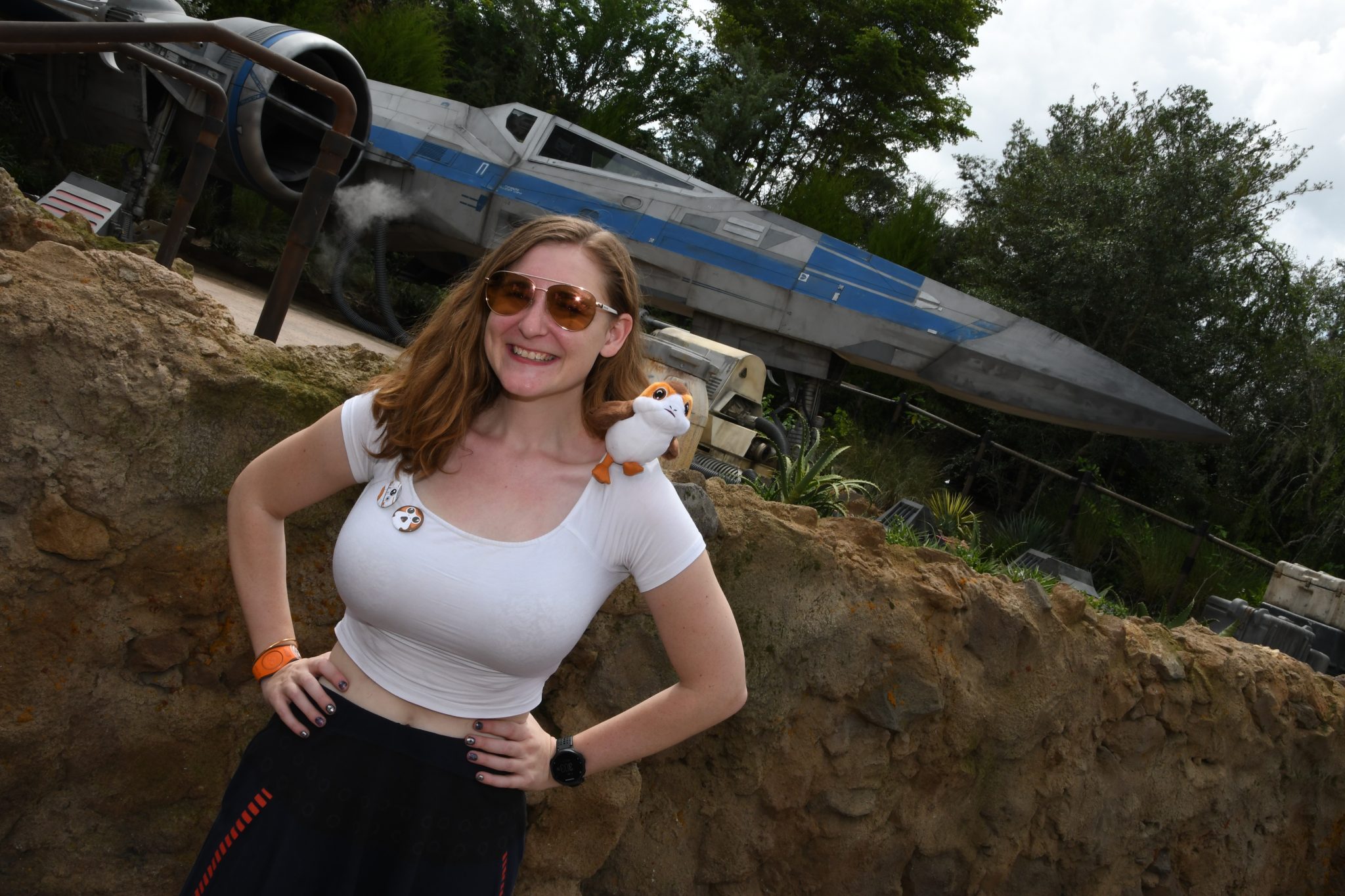 During the first ten minutes that I was in Galaxy’s Edge I saw Rey right away, and she was talking and interacting with some of the children. I also saw Chewbacca, stormtroopers, and Kylo Ren all throughout the day. It was neat to see them walking around and just interacting, not posing for pictures or anything like that. 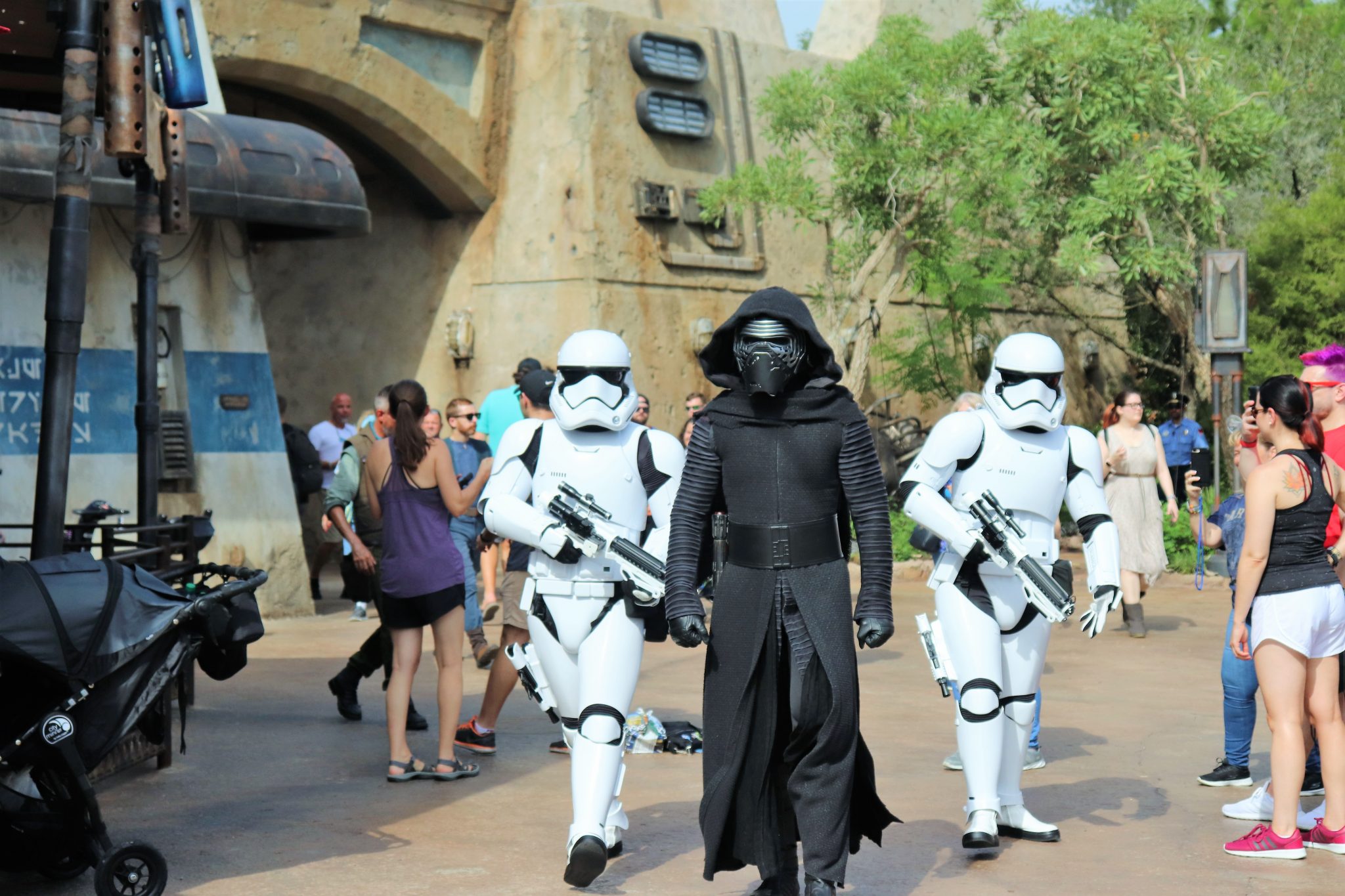 The Cantina is identical to the one in Disneyland. There are some very minor differences on the menu, mostly in prices. I’m going to do a full write-up on Oga’s soon, now that I’ve experienced it twice and have had an opportunity to try more of the drinks! It’s small, but I love the atmosphere. While there are a few tables/booths, most of the people who come in will be at the bar which is standing room only. Since at least right now you’re limited to 45 minutes and 2 drinks, it’s not so bad to stand. 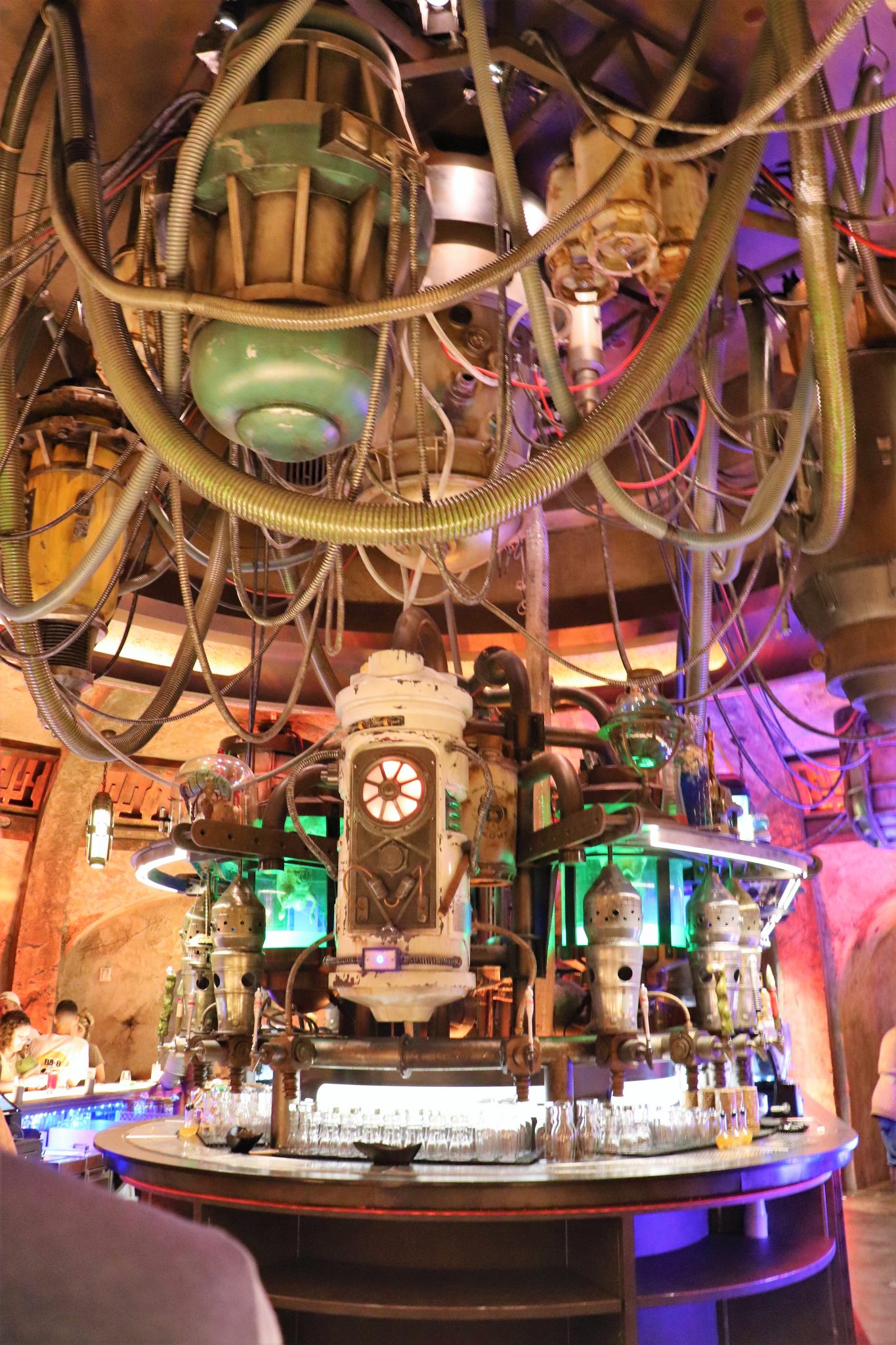 DJ Rex is spinning tunes and the bartenders were pretty lively – moreso here than in Disneyland. They clapped along to certain songs and got the visitors chanting. This time I tried the two tequila based drinks – the Outer Rim (basically a margarita with “exotic fruit puree” and the Dagobah Slug Slinger (tequila with citrus juices and ginger – the ginger flavor was definitely strong). They were both very good. 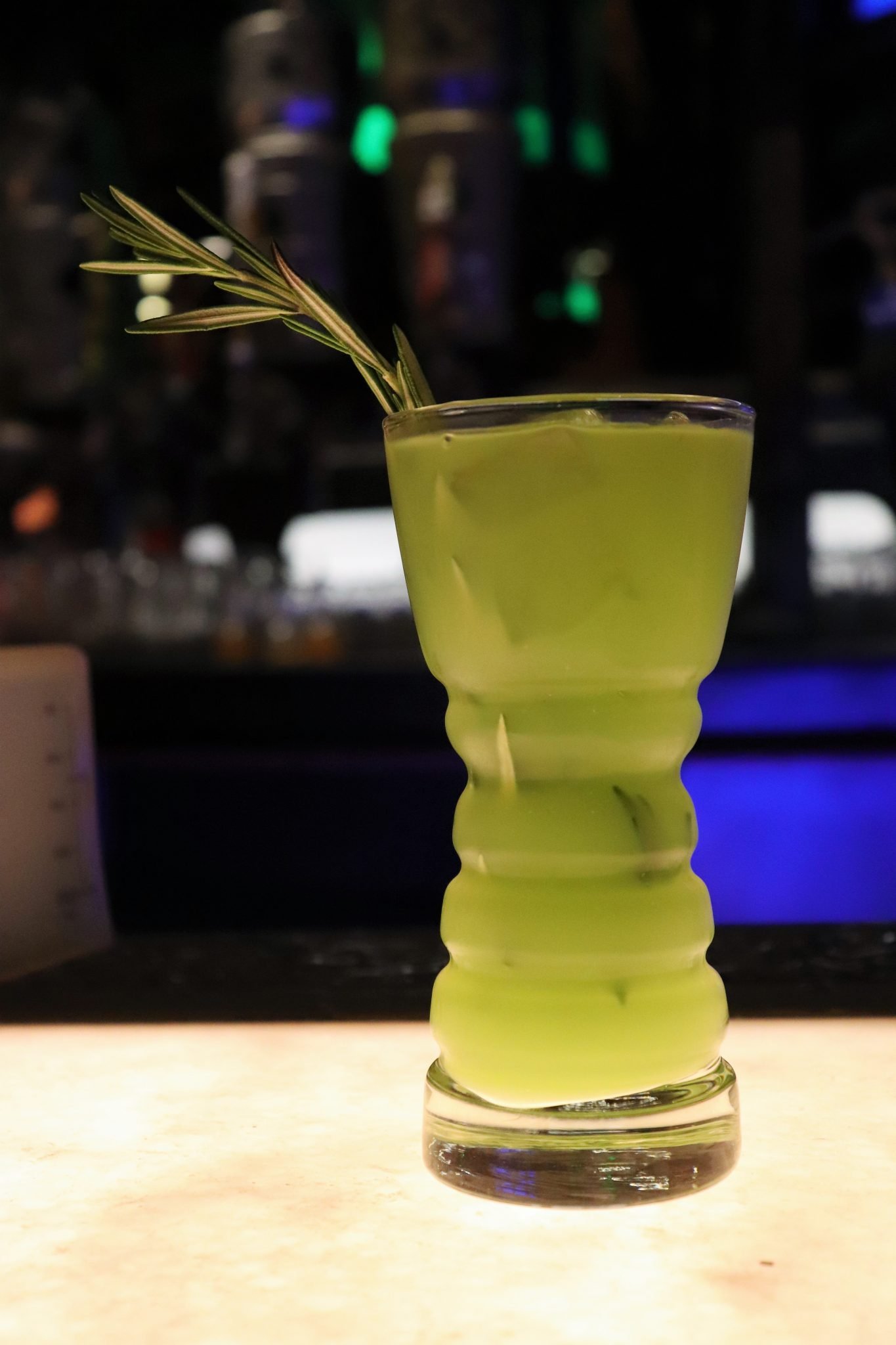 Once I left the cantina I decided it was time to take a ride on the Millennium Falcon: but pictures first, of course! They have photopass photographers a number of places, including two at the Falcon. This was definitely the longest line but it moved fairly quickly and the photographers were fun.

This is when I began to realize that pretty much every cast member was going to make a comment about my porg. Many asked what I named him (we ultimately went with Nugget), some loved him and the photographers had a lot of fun posing him, some CMs told me he was a pest, and few asked if I was going to roast and eat him! On Smuggler’s Run I was warned to be careful because there was a porg nest and they apparently breed like crazy. 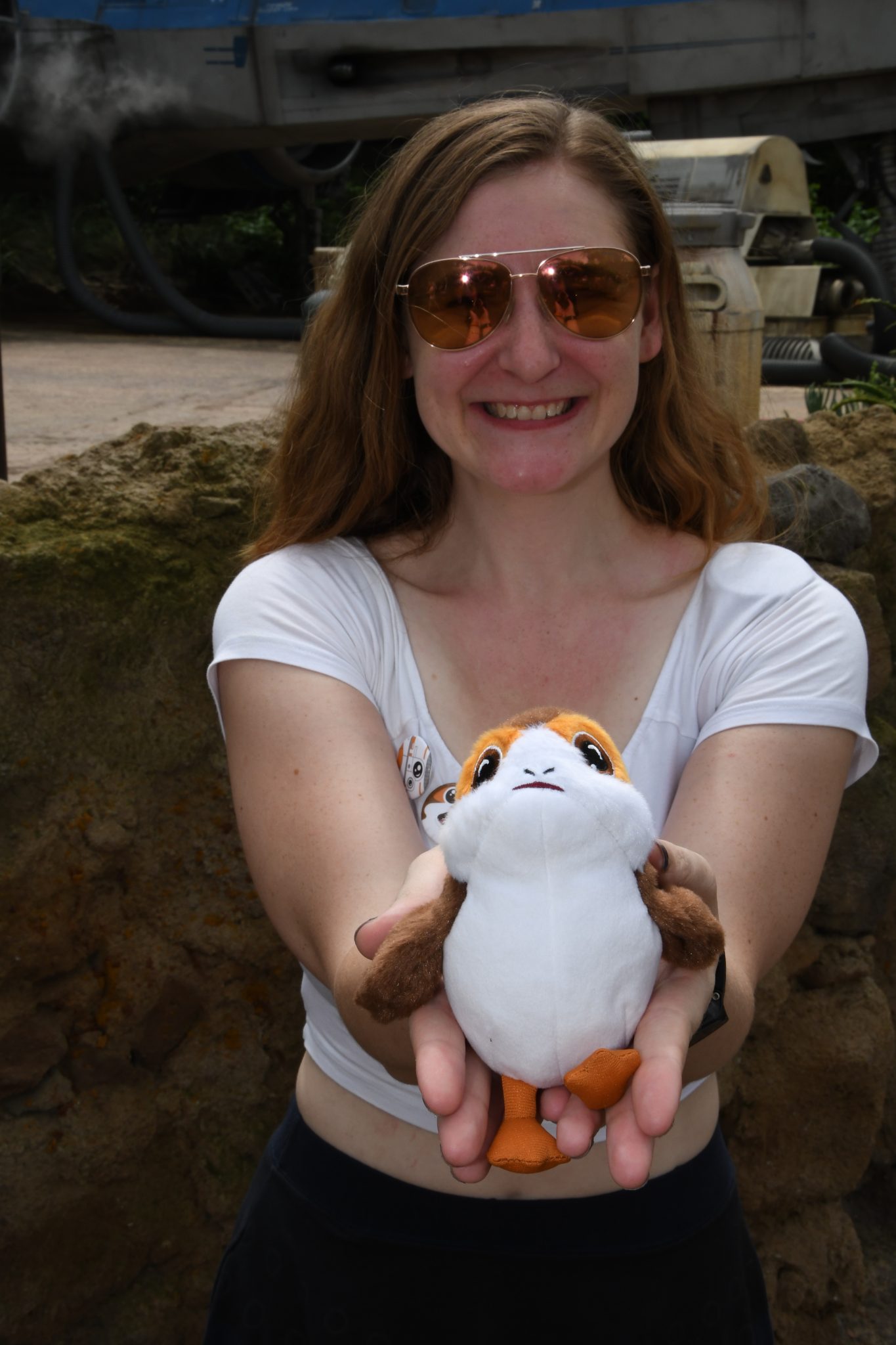 I used the single rider line for the Falcon since the wait was at about 50 minutes. I probably waited maybe 20. My role was engineer, which is the one I didn’t do last time in Disneyland. I actually enjoyed this, I felt very involved, but the one downside for me was that I had to turn away from the screen a lot to press the buttons that were lighting up. So I felt a little drawn out of what was happening.

By the time I got off of Smuggler’s Run it was around 12:30 so I decided it was lunch time and headed to Docking Bay 7. There were so many options put I decided to go with the vegetarian option, the Felucian Garden Spread. I’m so glad I did because this was so good! It was spiced plant based “meatballs” with herb hummus, cucumbers, tomatoes, and pita bread. It’s definitely one of the best things I ate at Disney on this trip. I also had the oi-oi puff (raspberry cream puff with passion fruit mousse) and a Gold Squadron Lager (brewed by my hometown’s Blue Point Brewery!). 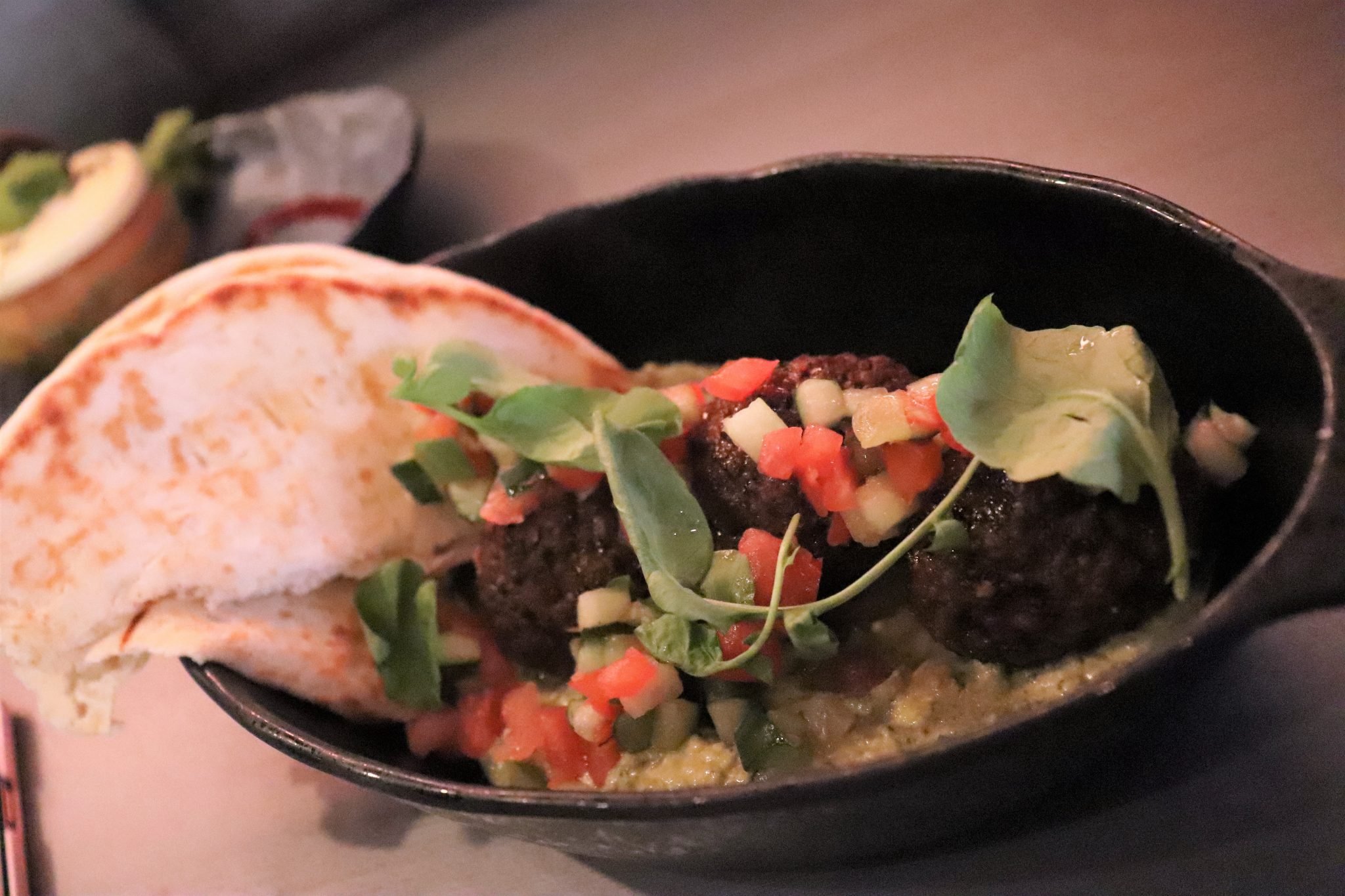 Following lunch I browsed the shops for a bit. These had the been the most crowded at Disneyland, but it wasn’t as bad this time and I was able to see more of everything. The only purchase I made was a pin, but they do have a lot of cool things which are pretty tempting. I stepped into Dok-Ondar’s Den of Antiquities for the first time and it was pretty cool in there (especially Dok!). I just explored, looked around, and stopped for a few more photopass photos. 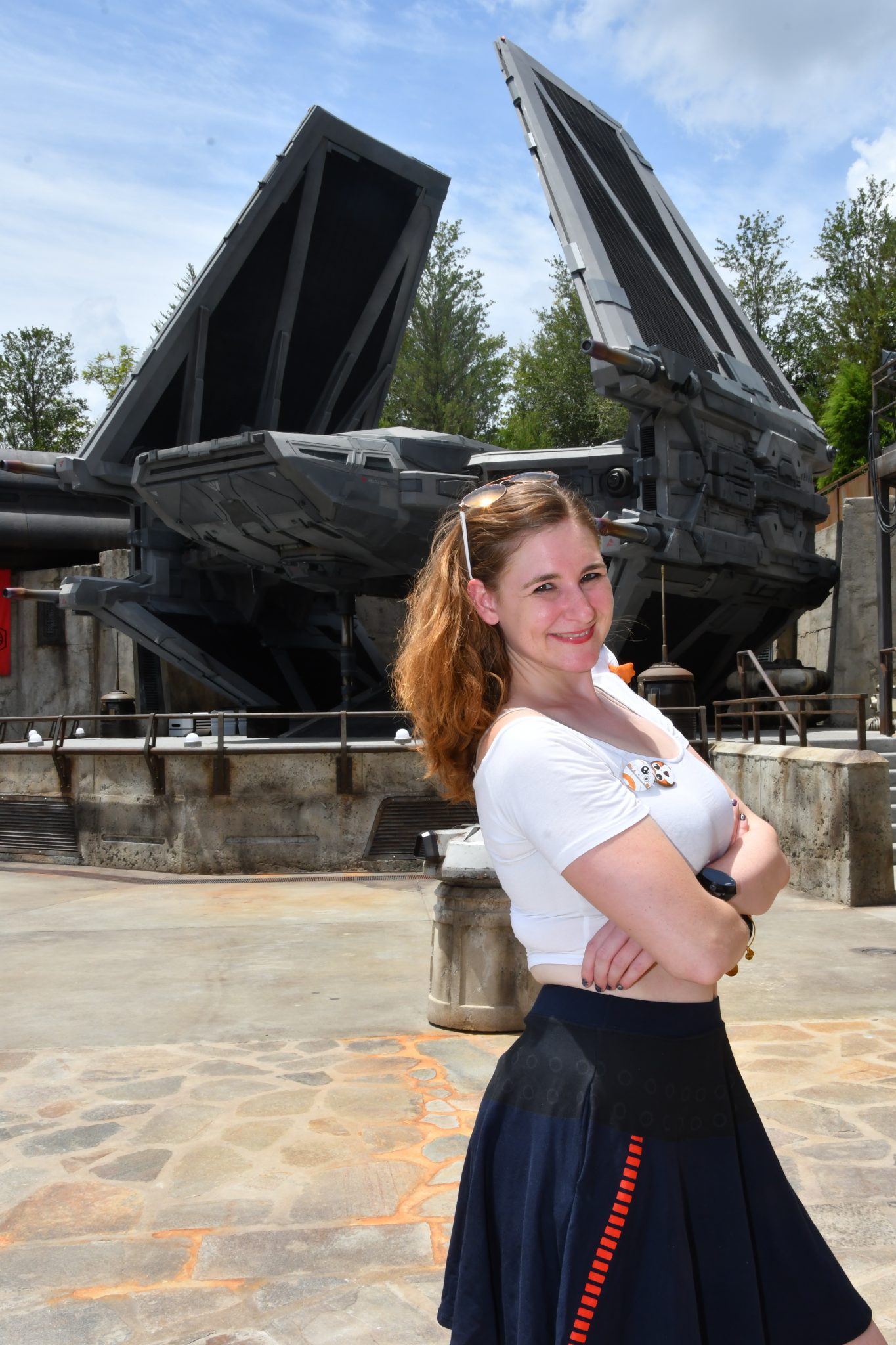 I wanted to try the green milk since I’d tried the blue milk last time, but when I got on the line they said the regular green milk wasn’t available – only the one with tequila. So I just decided to go with that – it was a tequila day, apparently! I know people have said mixed things about the blue and green milk but I really loved this. Like the blue it was sweet but not sickly sweet, and I found it very refreshing. 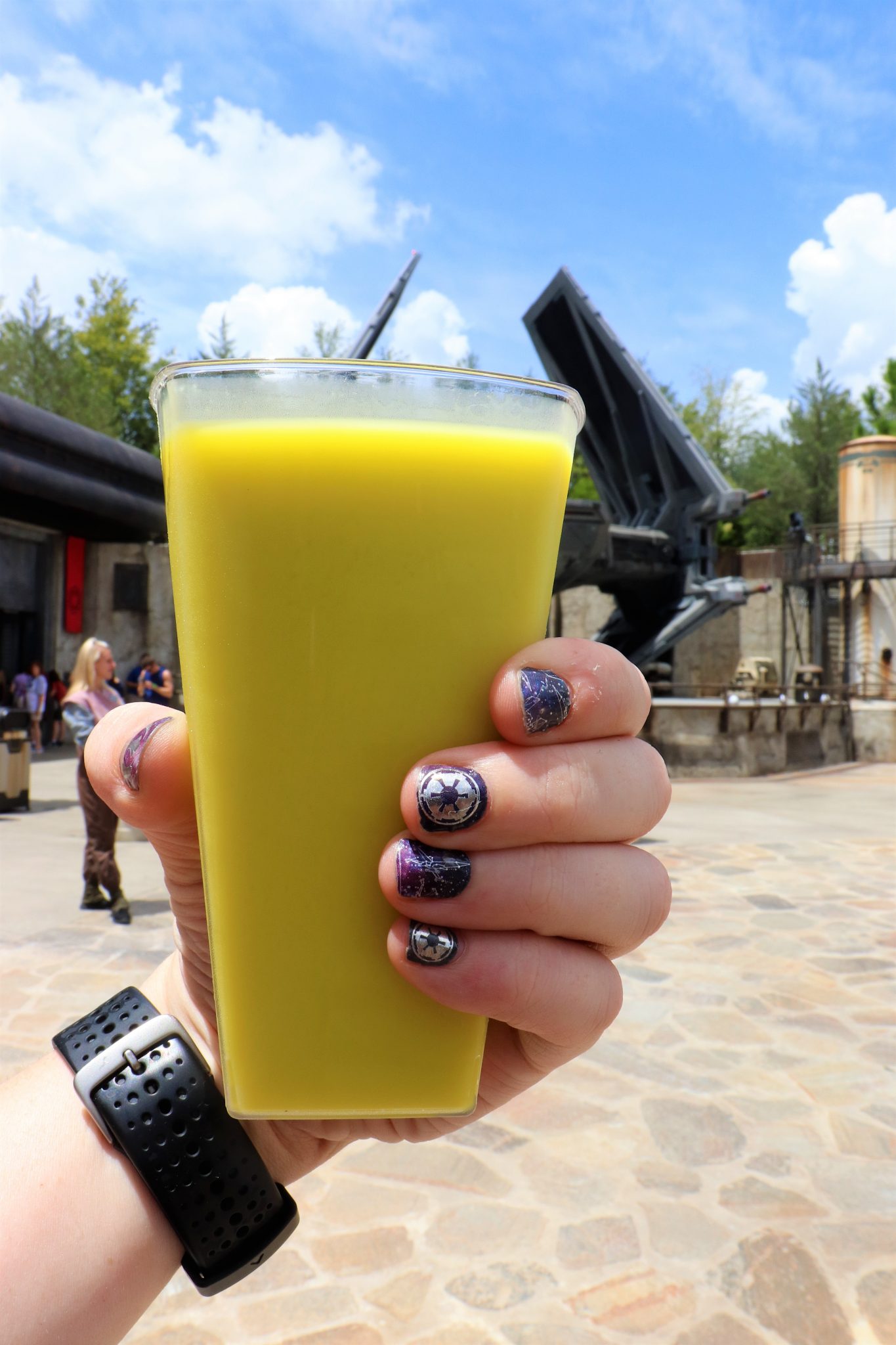 At this point it was getting close to the time I needed to leave (sadly, my flight was that evening – it seemed like they weren’t kicking people out when their reservation was up so I could have stayed as long as I wanted!). So I decided to do Smuggler’s Run one more time. I hit the single rider line again since the wait was again 50 minutes. The only downfall is that you don’t go through the regular queue, so you don’t get to see the Hondo animatronic. I was assigned engineer once again but people wanted to trade so I ended up as pilot this time! 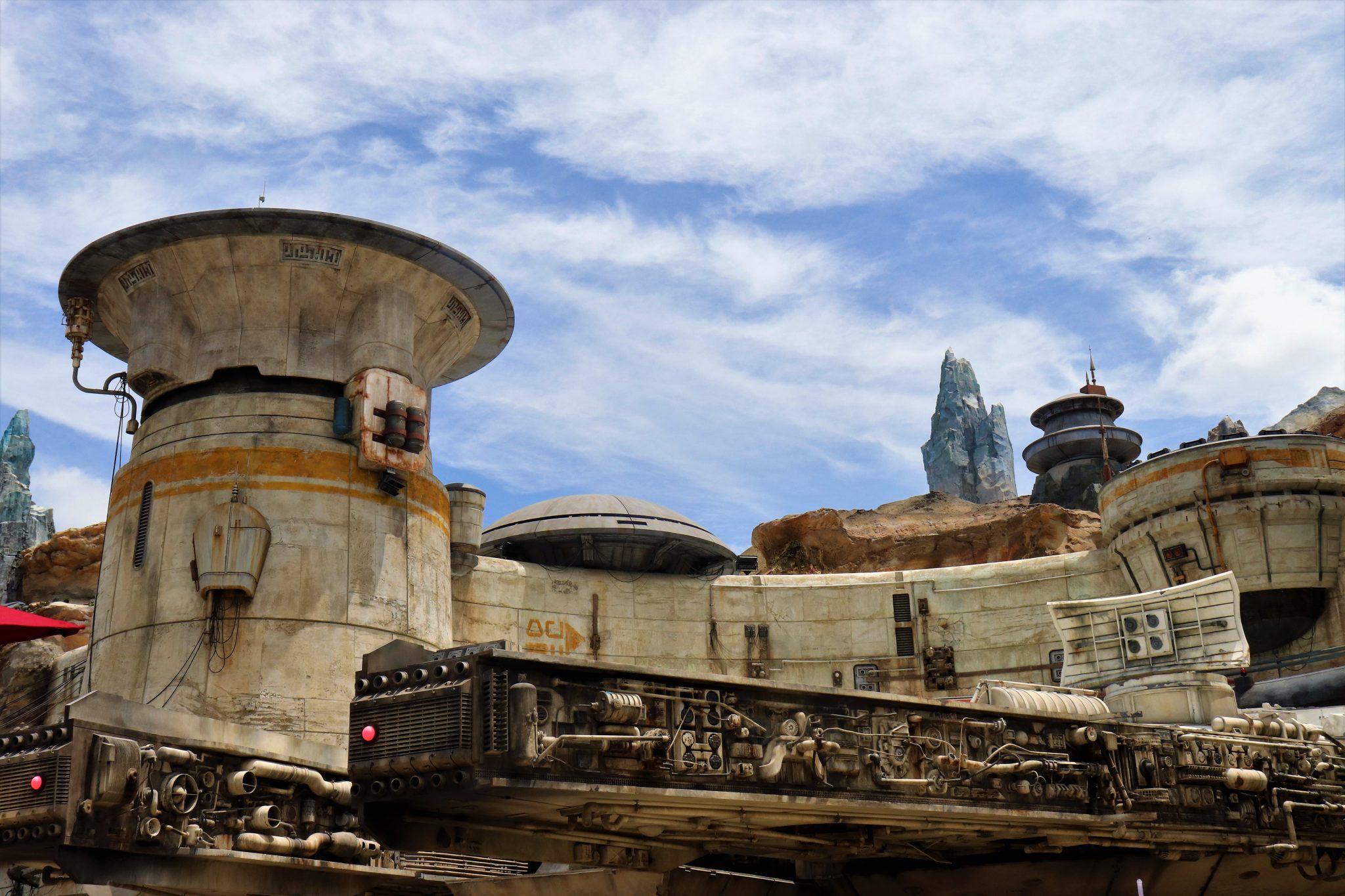 It was a lot of fun and our mission went pretty well. The whole group was very involved and excited about every turn and event, which made it even more enjoyable. But then, sadly, it was time for the Tragical Express and I had to leave Galaxy’s Edge. I’m really looking forward to being back in December, but also a bit apprehensive since we are there for opening day of Rise of the Resistance – I can’t imagine what the crowds will be like!

What are you most looking forward to at Galaxy’s Edge?