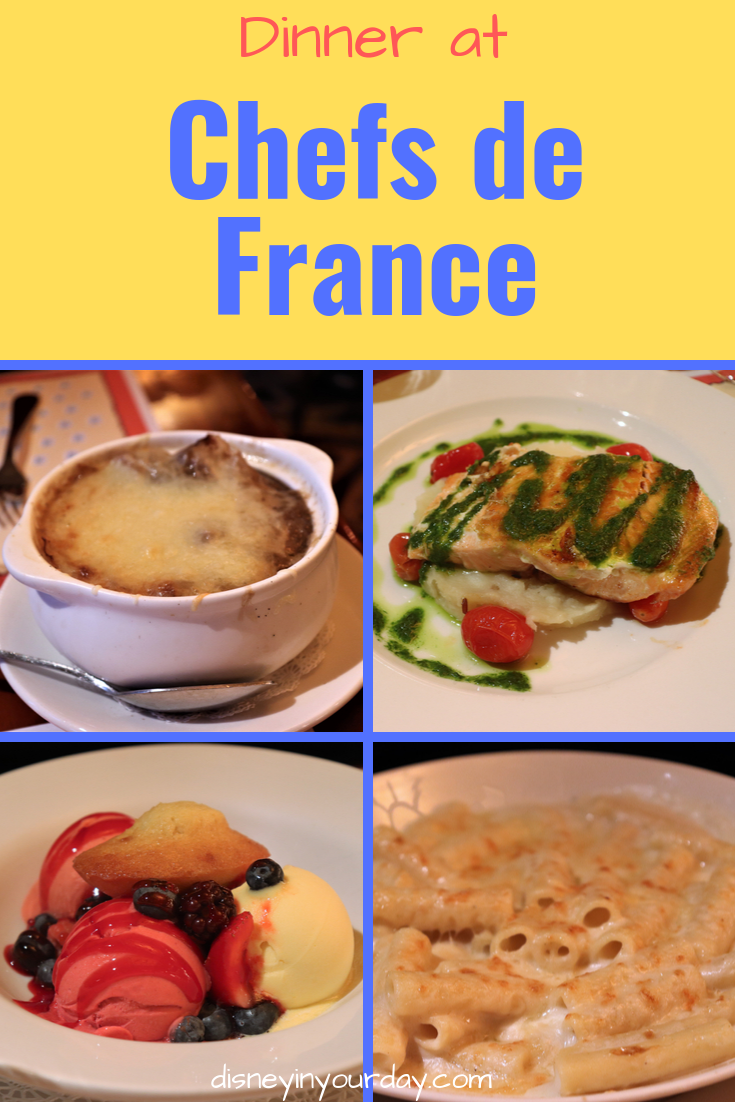 While on a short trip last month, I made a few last minute dining reservations (about a month ahead of time). One of the places we decided to have dinner was at Chefs de France in Epcot. I hadn’t eaten here since my honeymoon (in 2011) so I was interested in trying it again! 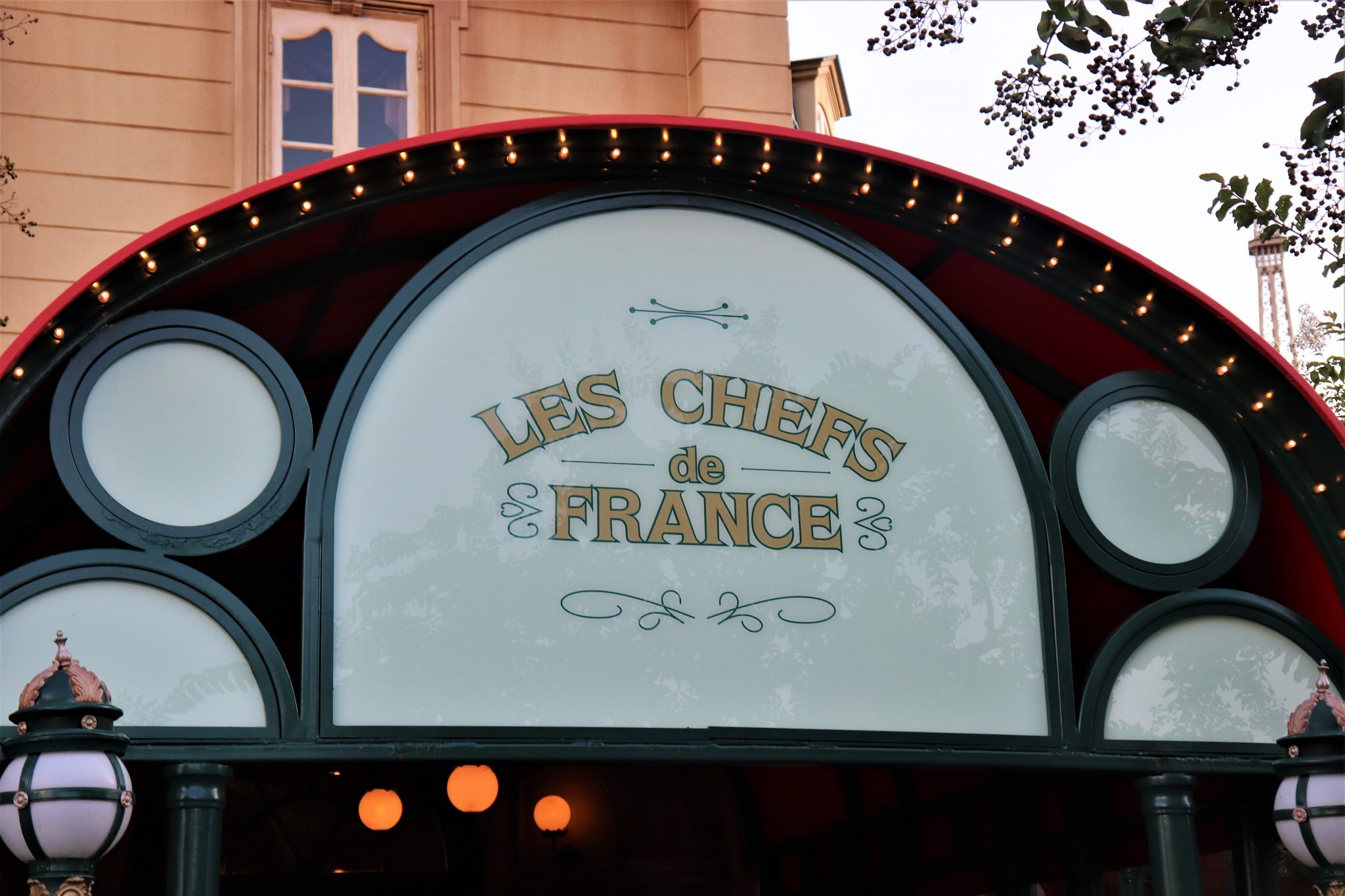 Things were pretty backed up when we got there – we had a reservation for 7:30pm and weren’t seated until closer to 8. Although there had been a lot of availability for reservations ahead of time (this isn’t one that will book up at your 180 day mark), they weren’t accepting walk-ups at that time and were scrambling a bit to get everyone in. Unlike many other Disney restaurants they still work on a reservation system where they physically write down your name on a piece of paper at check-in and then call you – so you can’t really walk away from the area. It’s nice that many restaurants have switched to a text notification.

Once we did finally get seated things picked up from there. Unfortunately they don’t take any discounts at dinner (we have Tables in Wonderland), only at lunch. But they do offer a prix fixe menu which is a pretty good deal depending on what you’re thinking of ordering, so we both decided to go with that. It’s a flat fee of $40 and you get an appetizer, entree, and dessert.

We did both start with a drink as well. My friend had the Kronenbourg 1664: 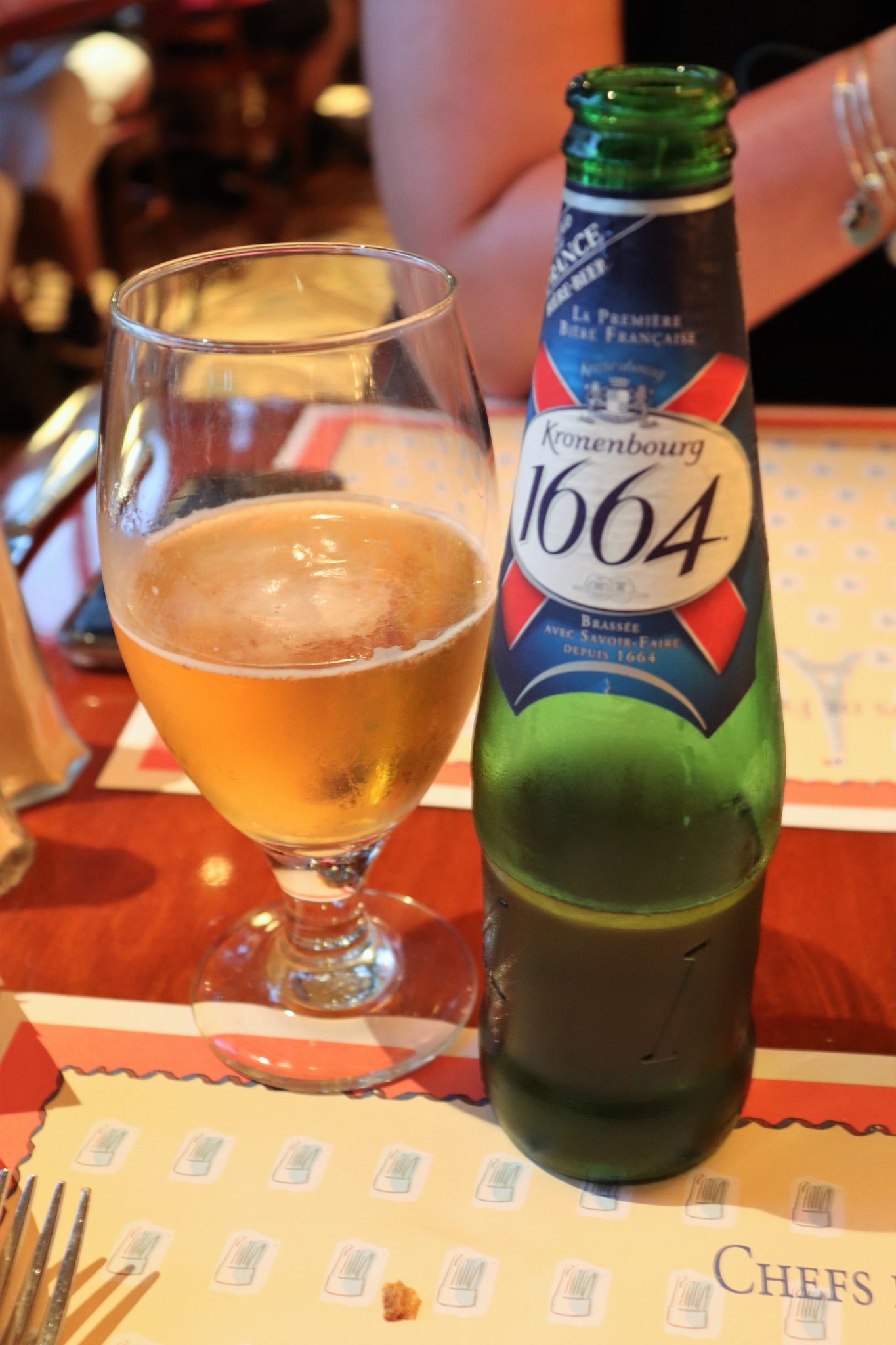 I’m usually a beer drinker but that night I was in the mood for wine – I guess it feels more “French” to me. I have had the 1664 before and actually quite like it, so it’s a good option and fairly affordable in terms of Disney alcohol standards (a bottle here was $6).

For my wine I went with the white that was recommended with my meal, I think it was a savignon blanc: 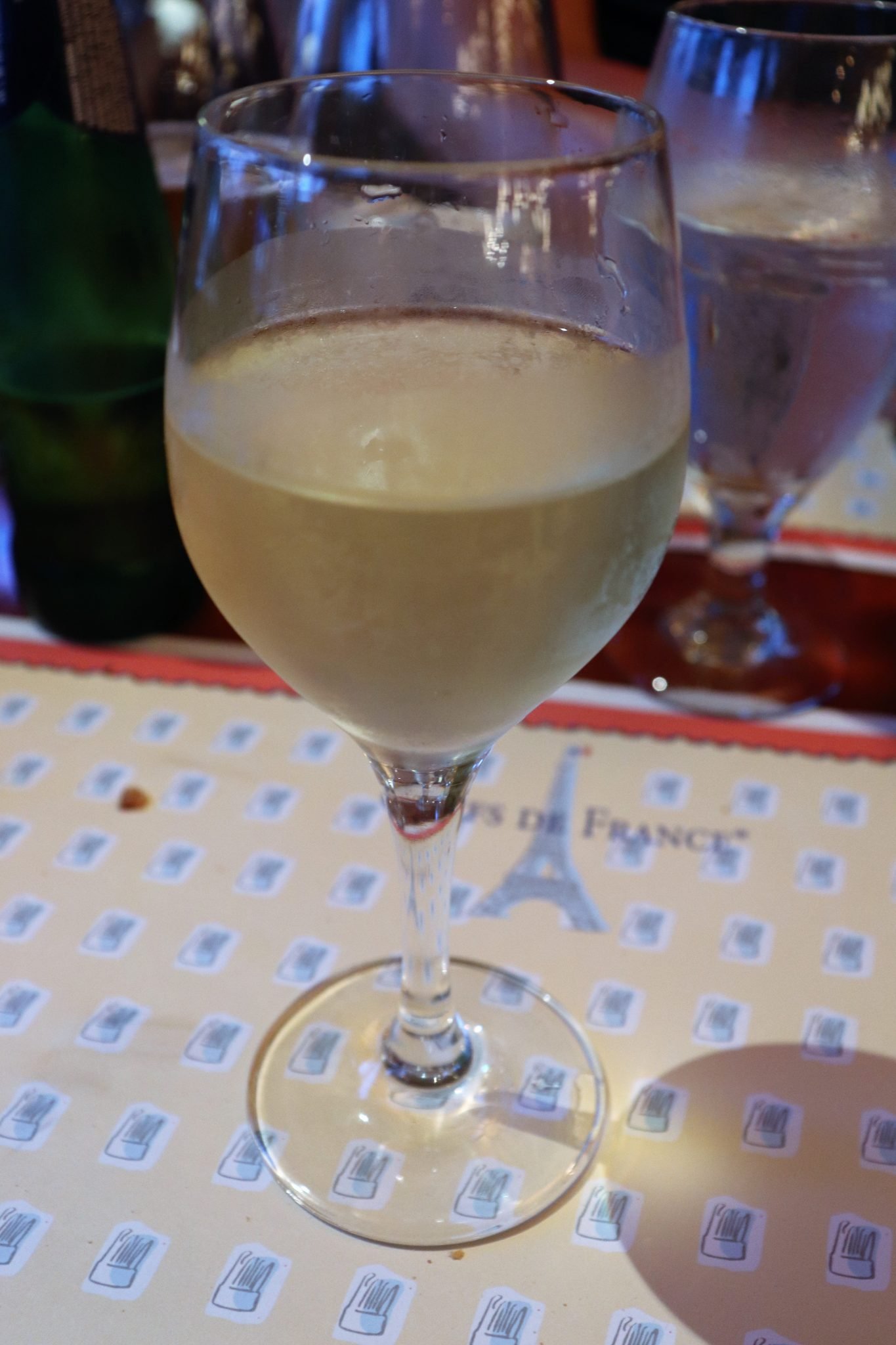 This was recommended for the entree I ordered and I thought it was good. I’m usually more of a red person over white but with fish I wanted the white wine. It did the trick and was light and pleasant.

They also bring you a complimentary baguette to start the meal with. This is a very good, crusty bread. It comes in a bag and is uncut so you can break it up however you like. And they will bring you more if you want it. 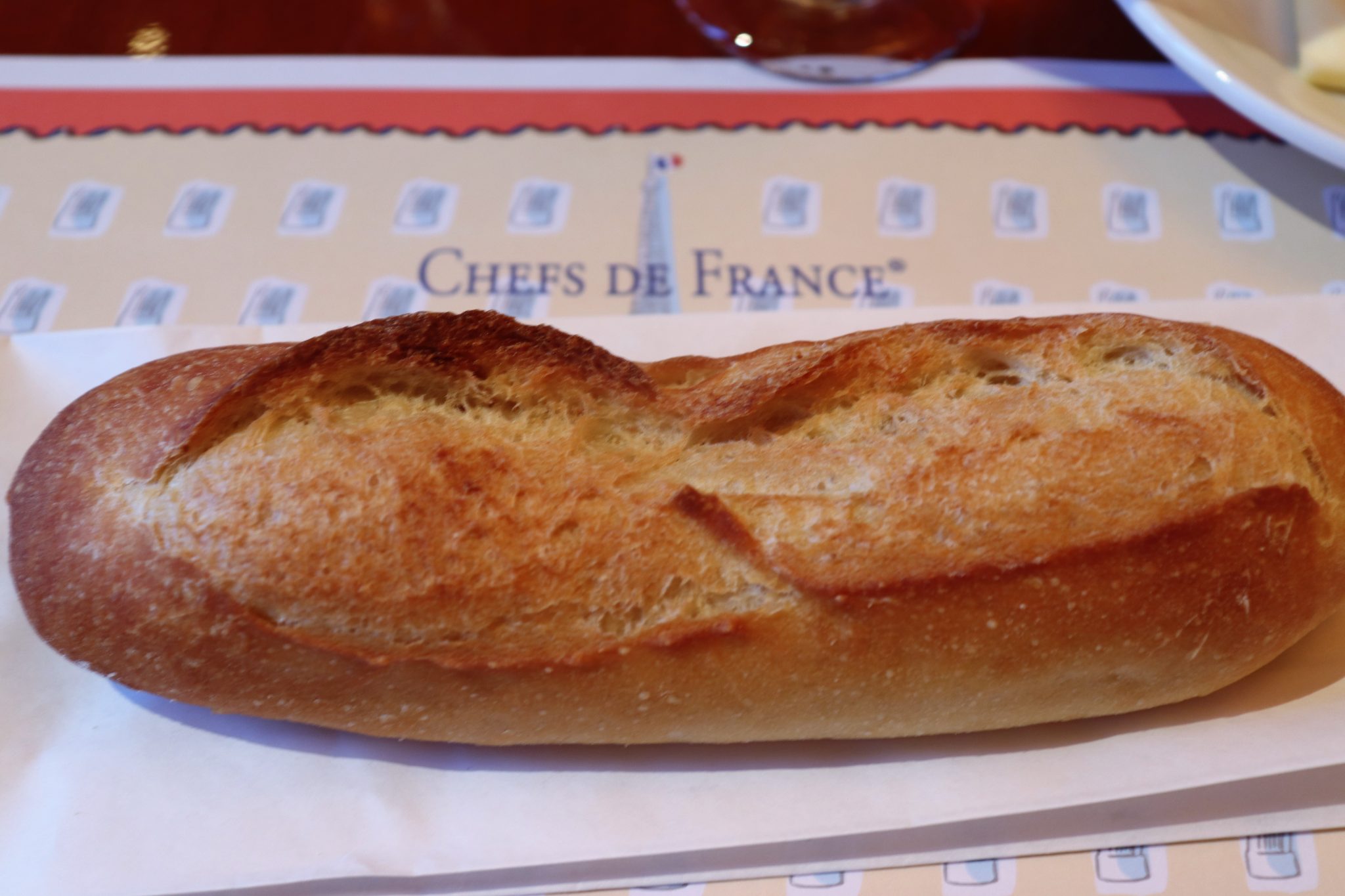 For her appetizer my friend went with the French Onion Soup: 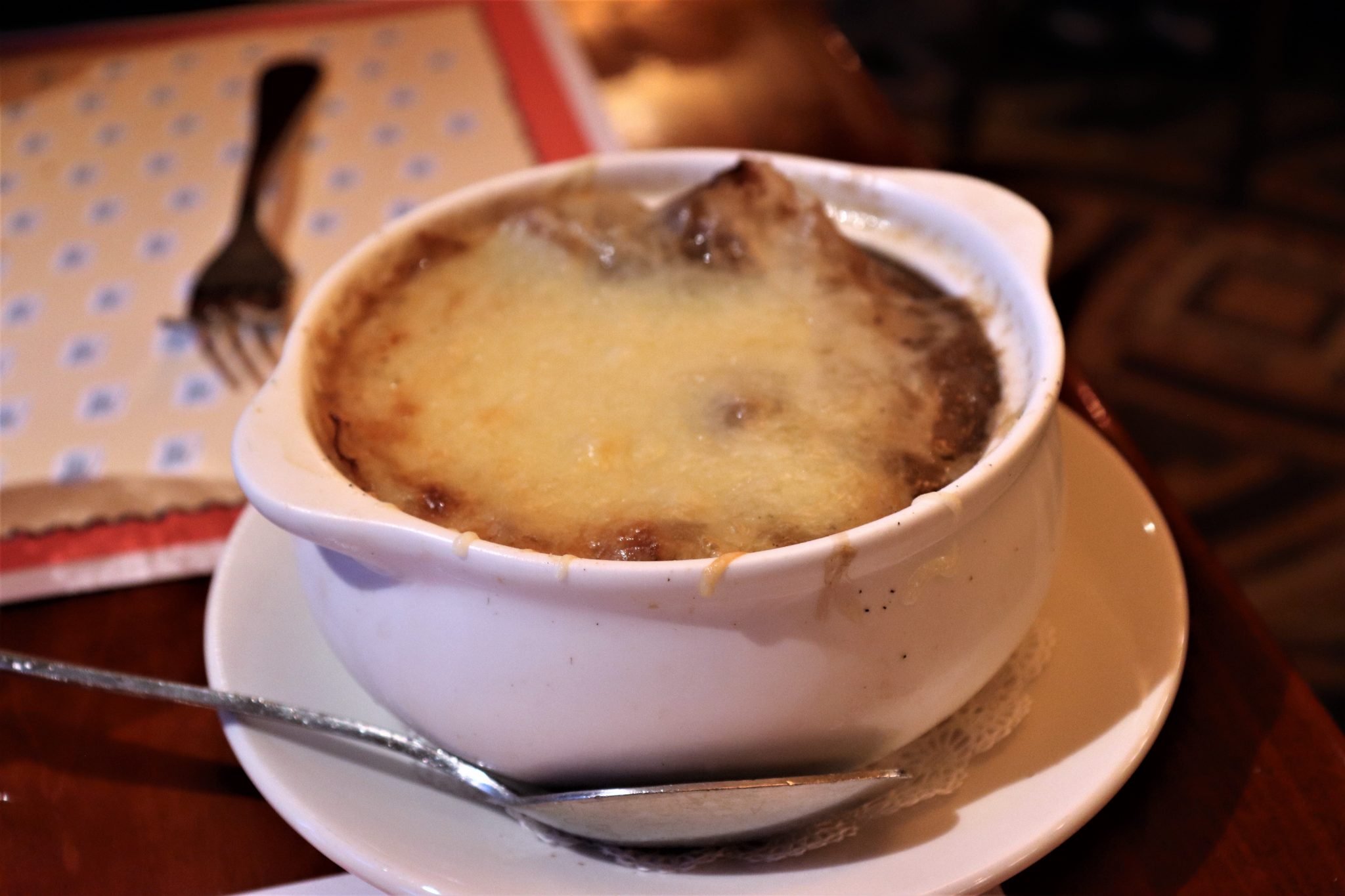 She said it was very good (though I didn’t try it myself as I don’t care for French Onion). It looked like it was covered with lots of delicious cheese on top.

I had the lobster bisque: 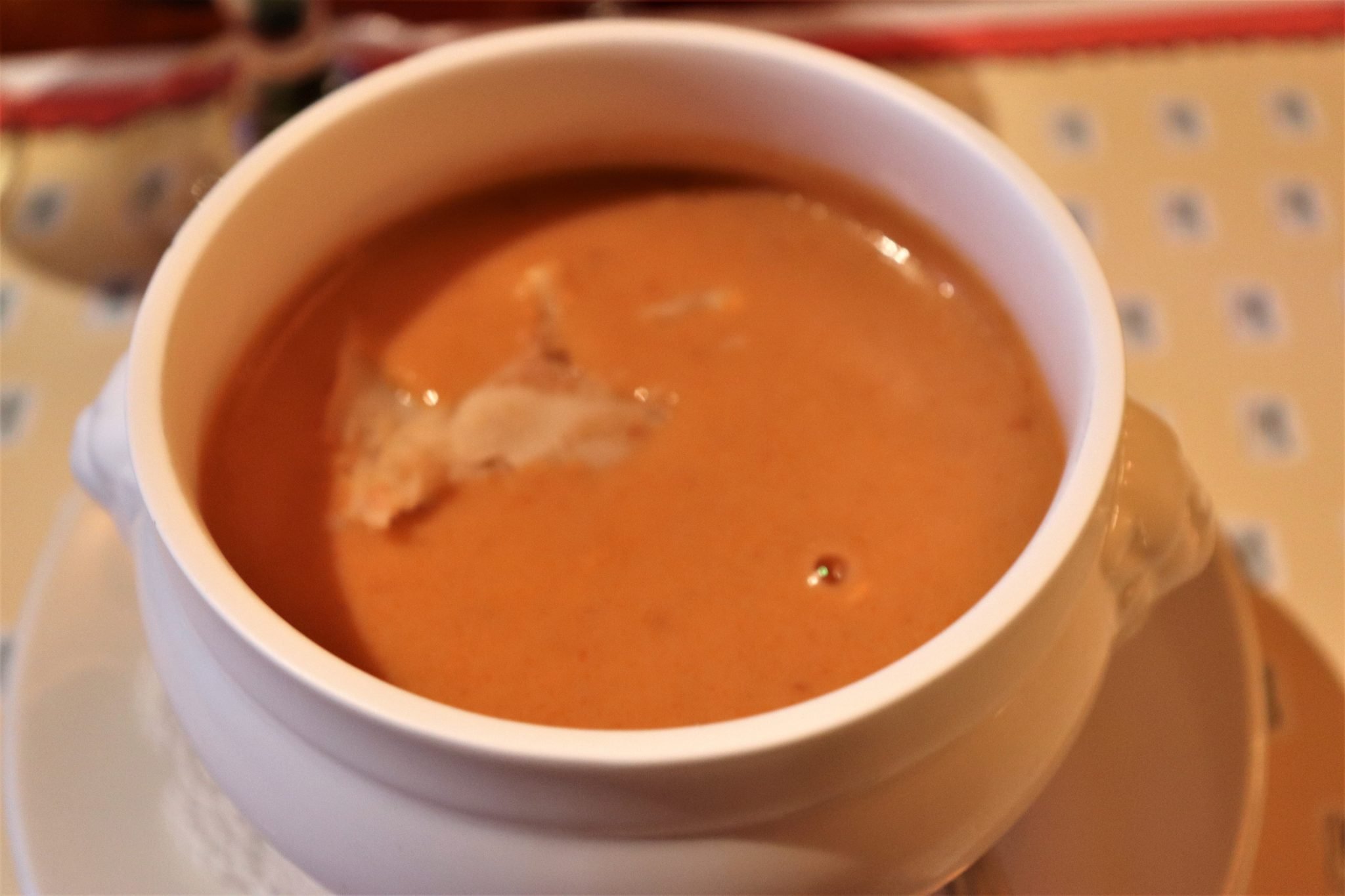 This was really excellent. I was surprised by how much I enjoyed it – though I love soup and I love lobster, I’ve found many bisques can get a bit too fishy for my taste. That wasn’t the case here. The soup itself was very creamy and buttery, and there were a lot of really big chunks of lobster in it. This was probably my favorite part of the meal.

For her entree my friend had the Gratin de Macaroni (with cream and Gruyère cheese): 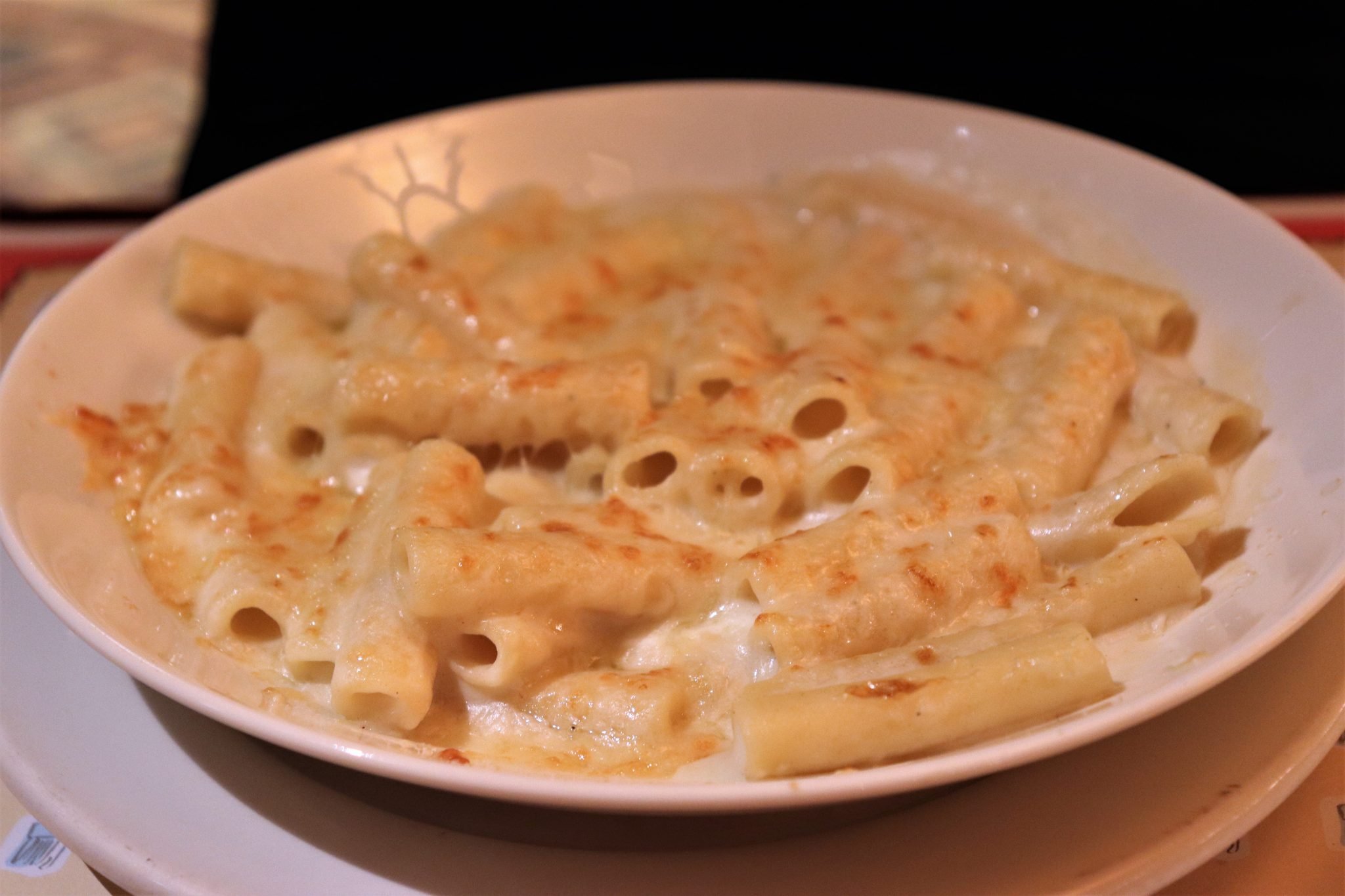 I had been eyeing this up for some time and kind of thought I would be the one ordering it, but when the night came my stomach was being a little weird and I knew I needed something with more protein. I did get to steal a few bites of this and it is as good as it looks. If you’re craving some delicious mac and cheese this is a great place to do it.  Cheese and pasta are two of my favorite things so I wish I was a little more up to it that night! 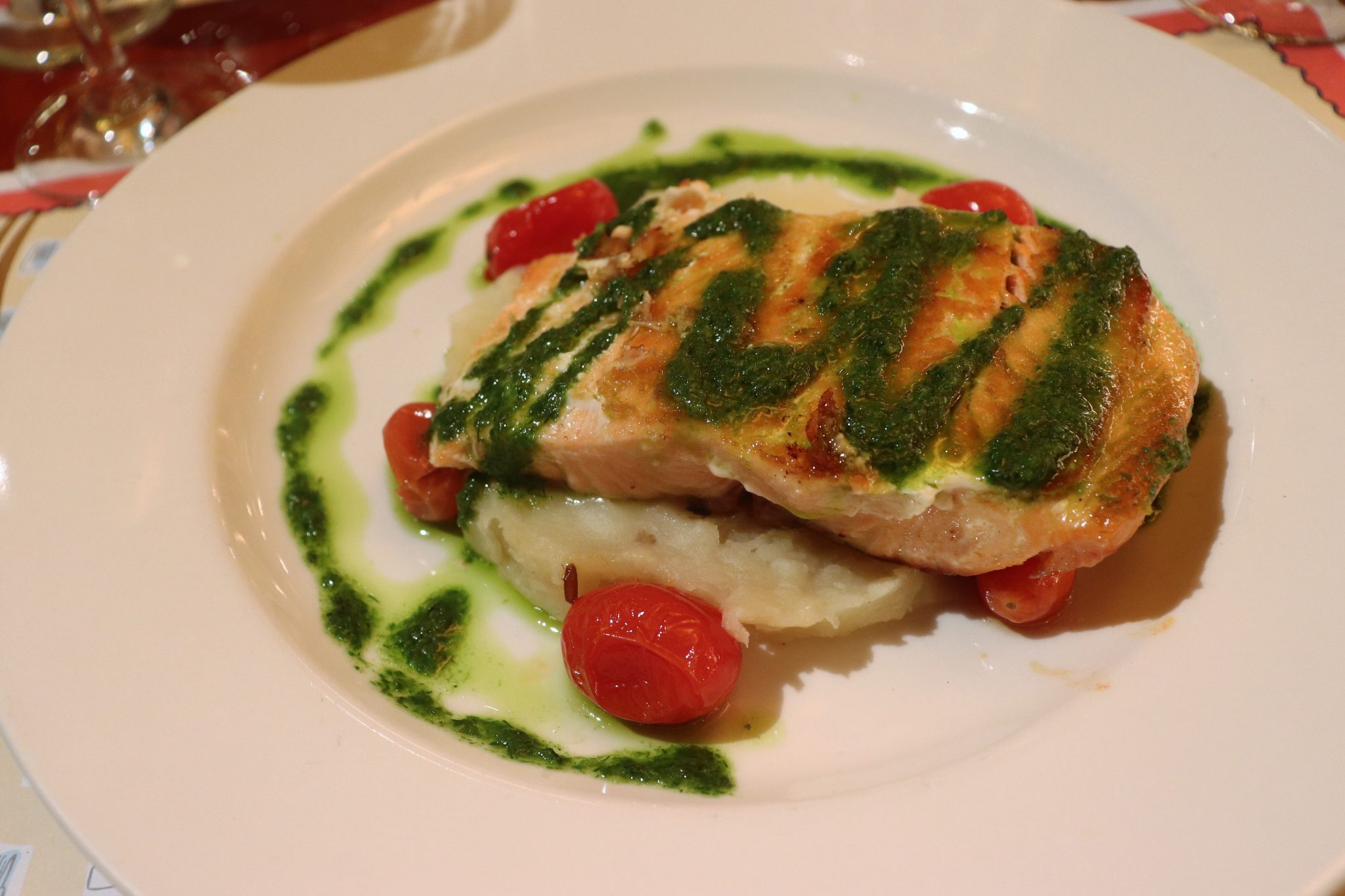 As I mentioned this was kind of my “second choice,” but I think I lucked out because it was absolutely delicious. The salmon was good quality and cooked well. It wasn’t super fishy but very tender. My friend hates fish and actually tried a bit and didn’t hate it, so to me that really says a lot. The sauce it comes with is an herb sauce that had a ton of bright flavor. It was kind of like a pesto but not basil based. I’d love to recreate this at home.

Finally it was time for dessert! My friend went with the Assiette de Sorbets du Jour(Daily assortment of fresh Sorbets with a Madeleine): 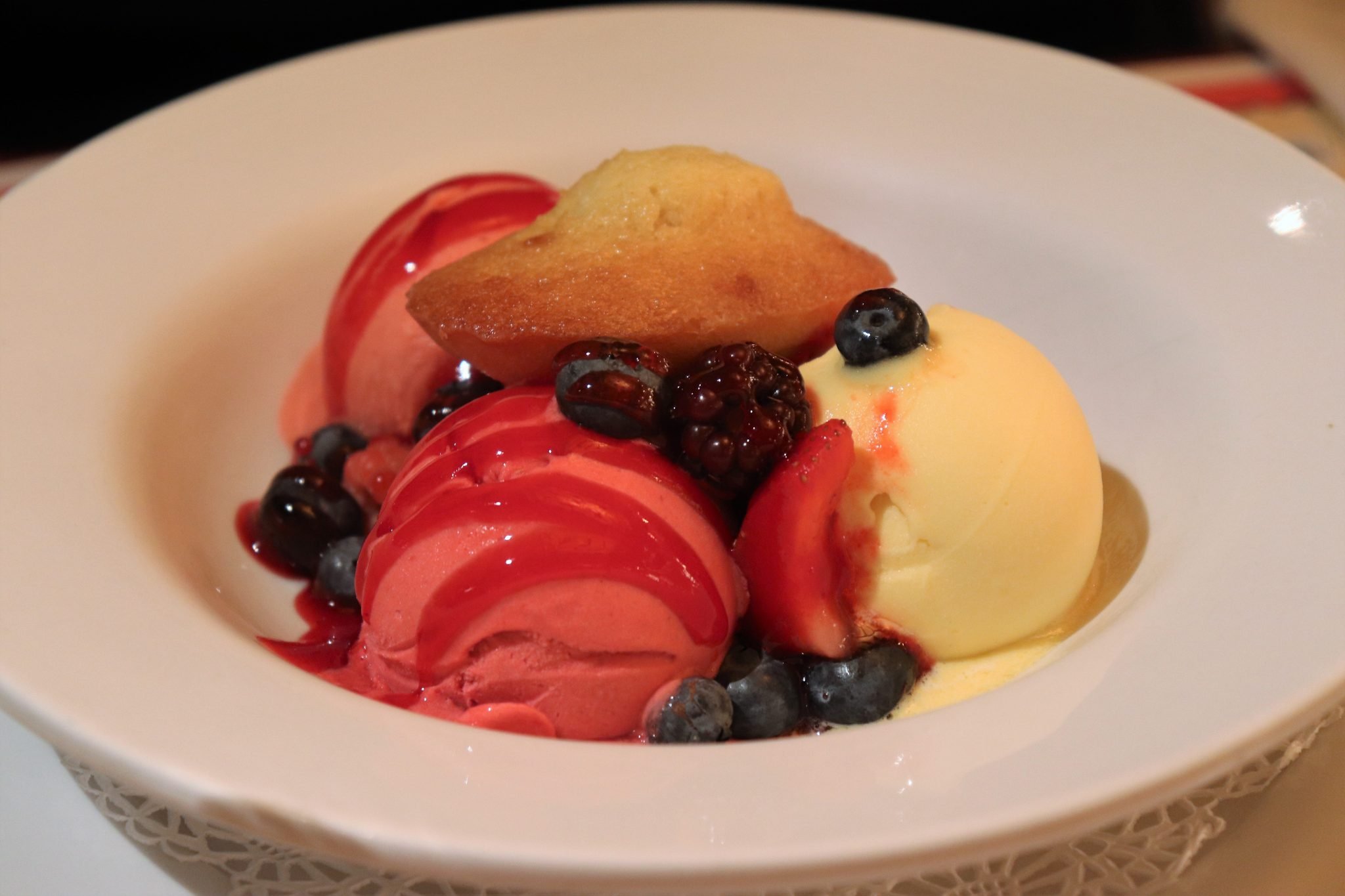 After seeing this delivered to someone else’s table it was very tempting to order because it looked so good. And they have some good quality sorbet – the three flavors were strawberry, raspberry, and passion fruit. The passion fruit was more sour than expected, which I personally like. I think the strawberry was my favorite. 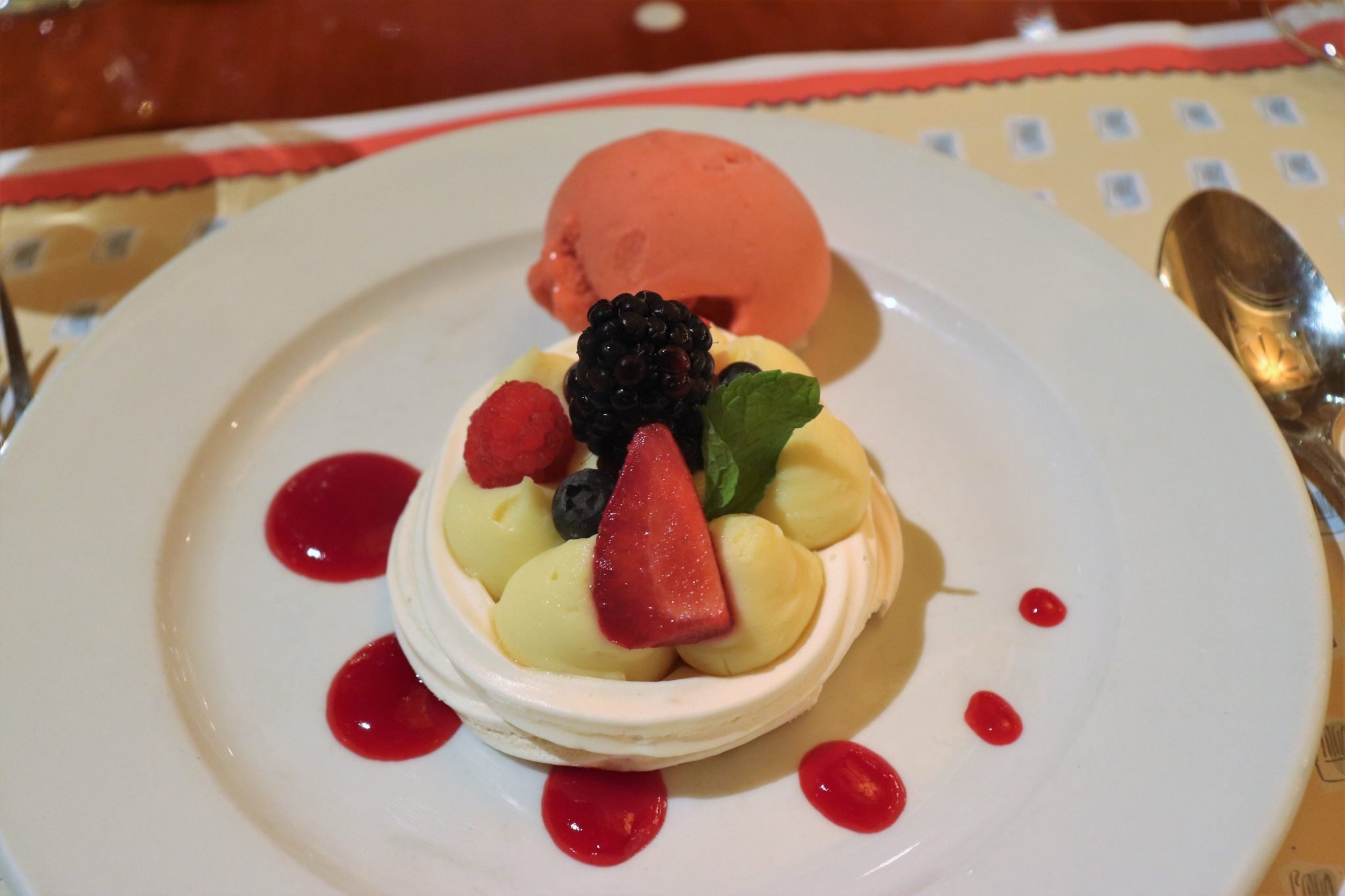 This was quite good. It came with the strawberry sorbet which was just so good – creamy and sweet. The fresh fruit was excellent and so was the raspberry sauce. The meringue itself was just meh, but that’s pretty typical for meringue. It was more of a vessel to have the other stuff.

One weird thing about the dinner was that everyone seemed to be celebrating a birthday. Which isn’t normally a huge deal but all of the servers go over to sing, and they were doing it at least every 5 minutes. It kind of turned into a running joke but it did interrupt conversation throughout much of the night.

Overall I really enjoyed my meal at Chefs de France, though I wouldn’t say it’s one of my absolute favorite Disney restaurants. I’d come back in another 8 years, haha. Or if I was really craving mac and cheese. If I returned I’d almost certainly get the lobster bisque again since it was a highlight. When we went back in 2011 they had a small Remy animatronic that came around to the tables. I think it would be super fun if they did that again.

Have you been to Chefs de France? What’s your favorite thing to eat there?