You are here: Home / California Adventure / What dinner is like at the NEW Lamplight Lounge 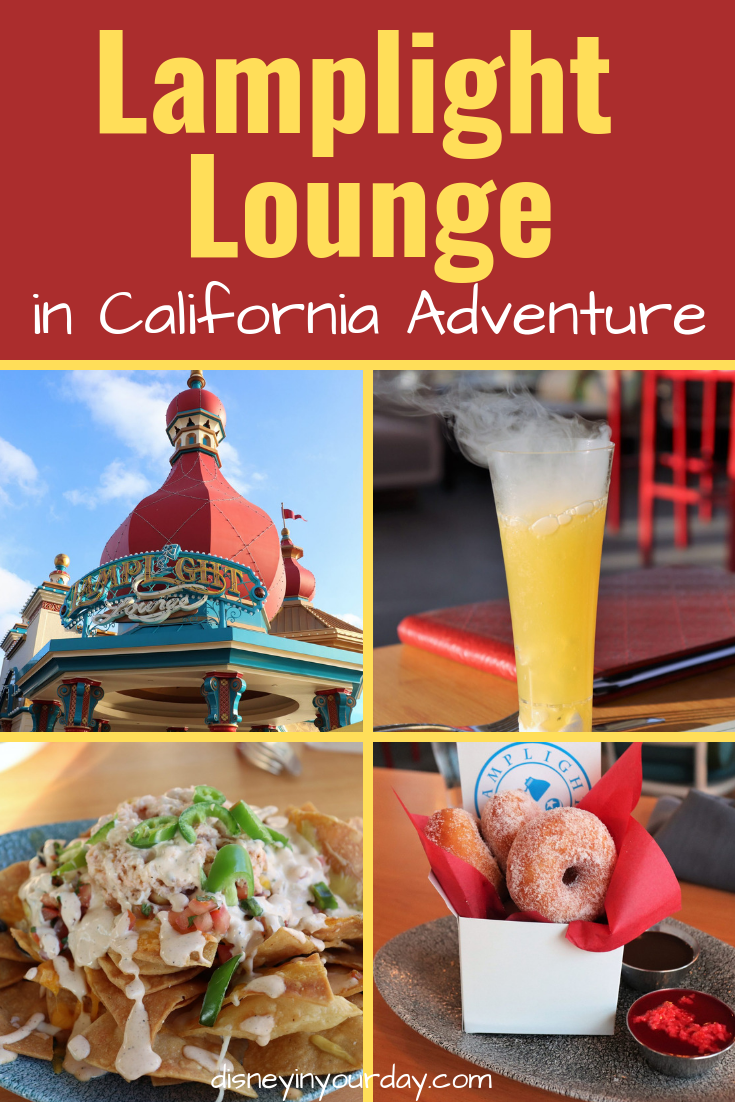 While I don’t get to spend as much time in Disneyland as I do in Disney World, I certainly try to take advantage of the time that I do have there! When we went for a quick weekend trip the weekend of  Galaxy’s Edge opening, I knew there were a few restaurants I needed to try. One of those was the newly opened Lamplight Lounge!

This location was previously Ariel’s Grotto, a character meal with the princesses where I had lunch the last time I visited, as well as the Cove Bar. It’s been redone with a Pixar theme to go with the new Pixar Pier. 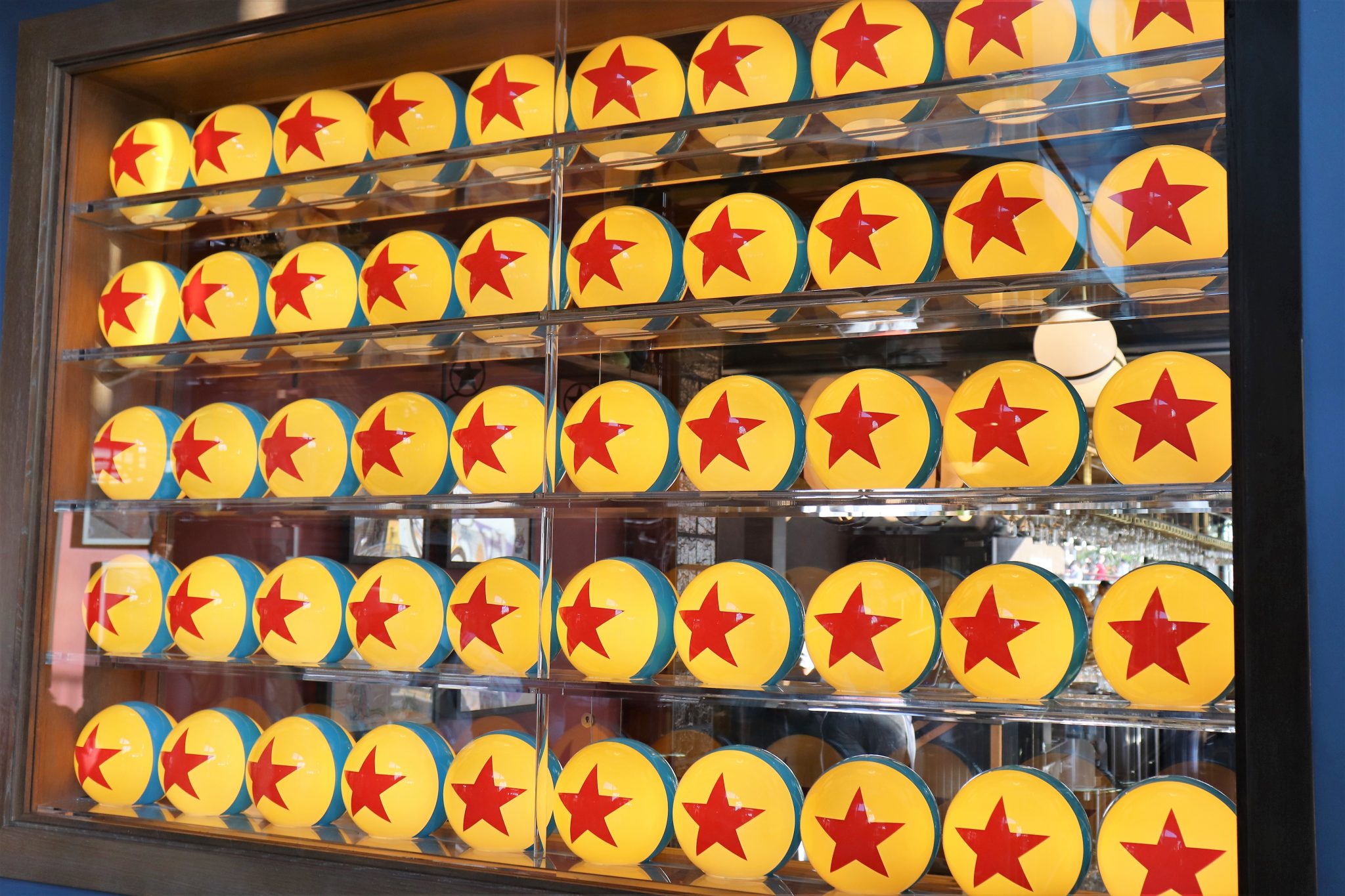 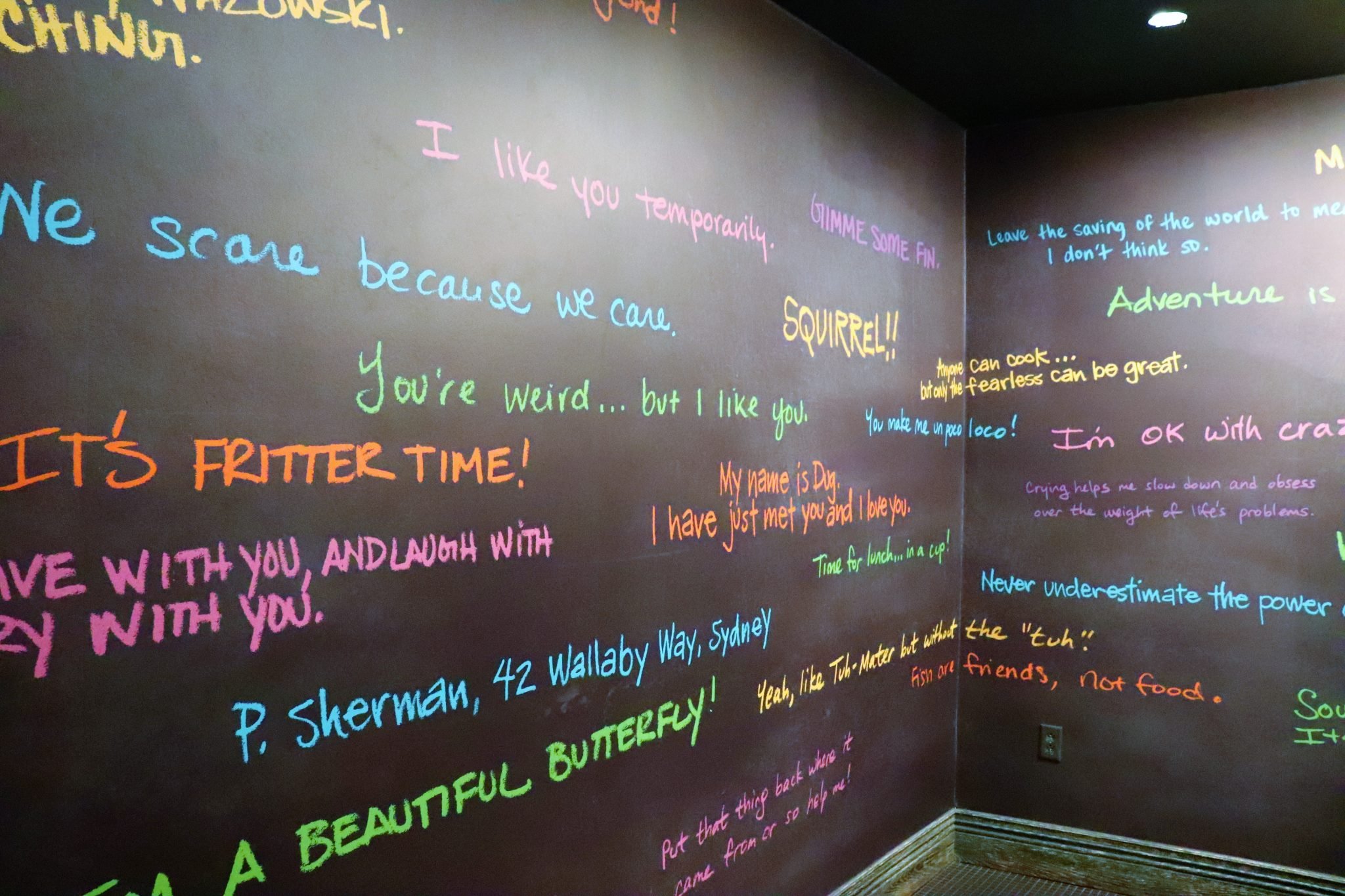 The set up is the same, which I appreciated because I really enjoyed dining outside. There are great views from here! We got a really nice table right at the edge of the water, and even though it was a little chilly that night they had heaters and small fires out on the patio so it didn’t really feel cold. 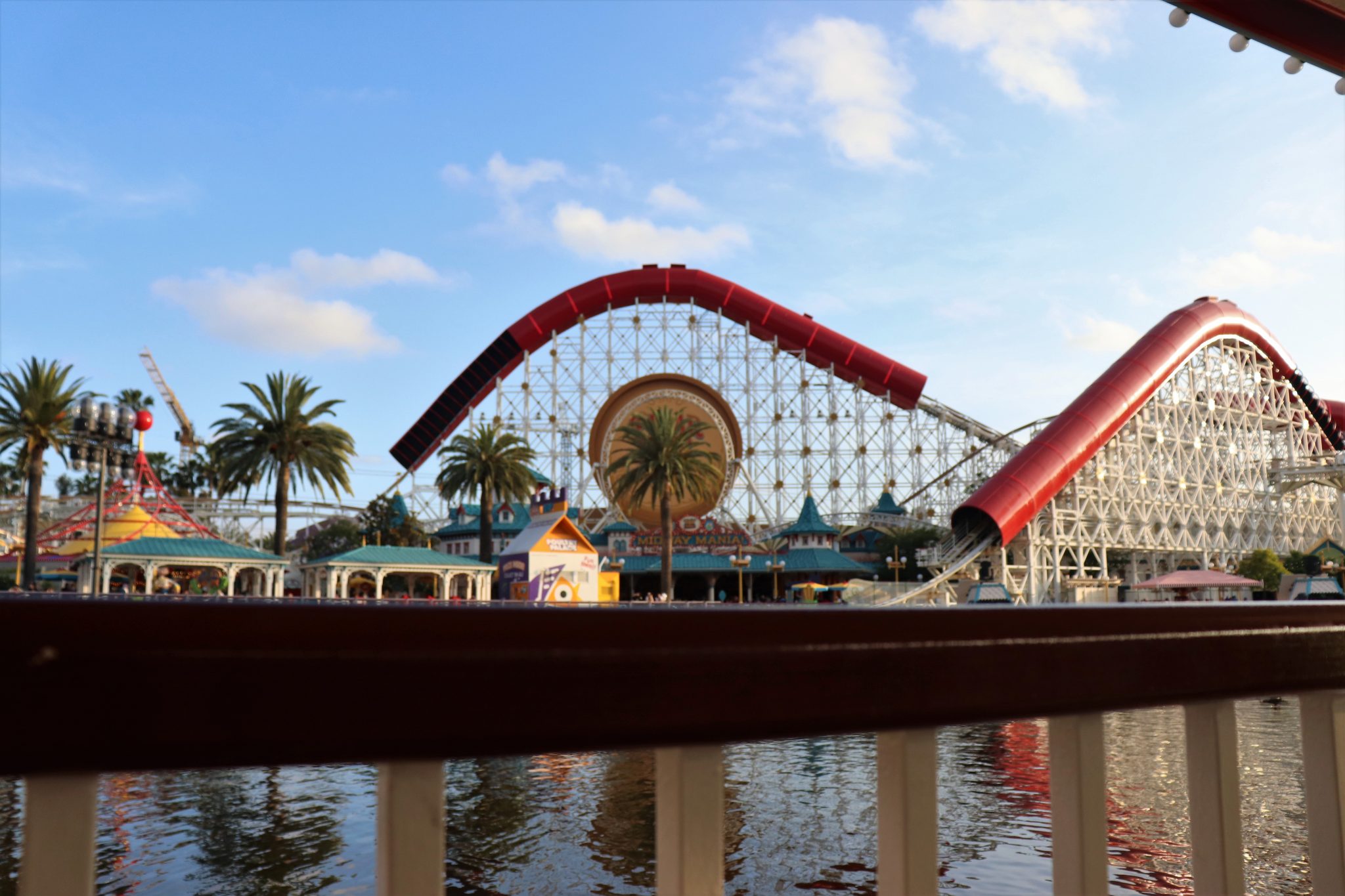 We all had to start with some drinks, of course! The drinks might be one of the most fun parts of the menu. The Cove Bar was known for colorful drinks (many of which were on a secret menu), but the Lamplight Lounge steps up to the plate with well designed drinks, many of which are “fun” or are themed after a Pixar movie. Here’s a look at the ones we tried:

Final with a Fix (Greenbar IXÁ Reposado Tequila, St. George Raspberry Liqueur, Cointreau, fresh Lime Juice, Agave Nectar, and a dash of Del Maguey Vida Mezcal). I love a good tequila based drink, and mixed with the raspberry it was very good. Not overly sweet but not an overwhelming taste of alcohol either. 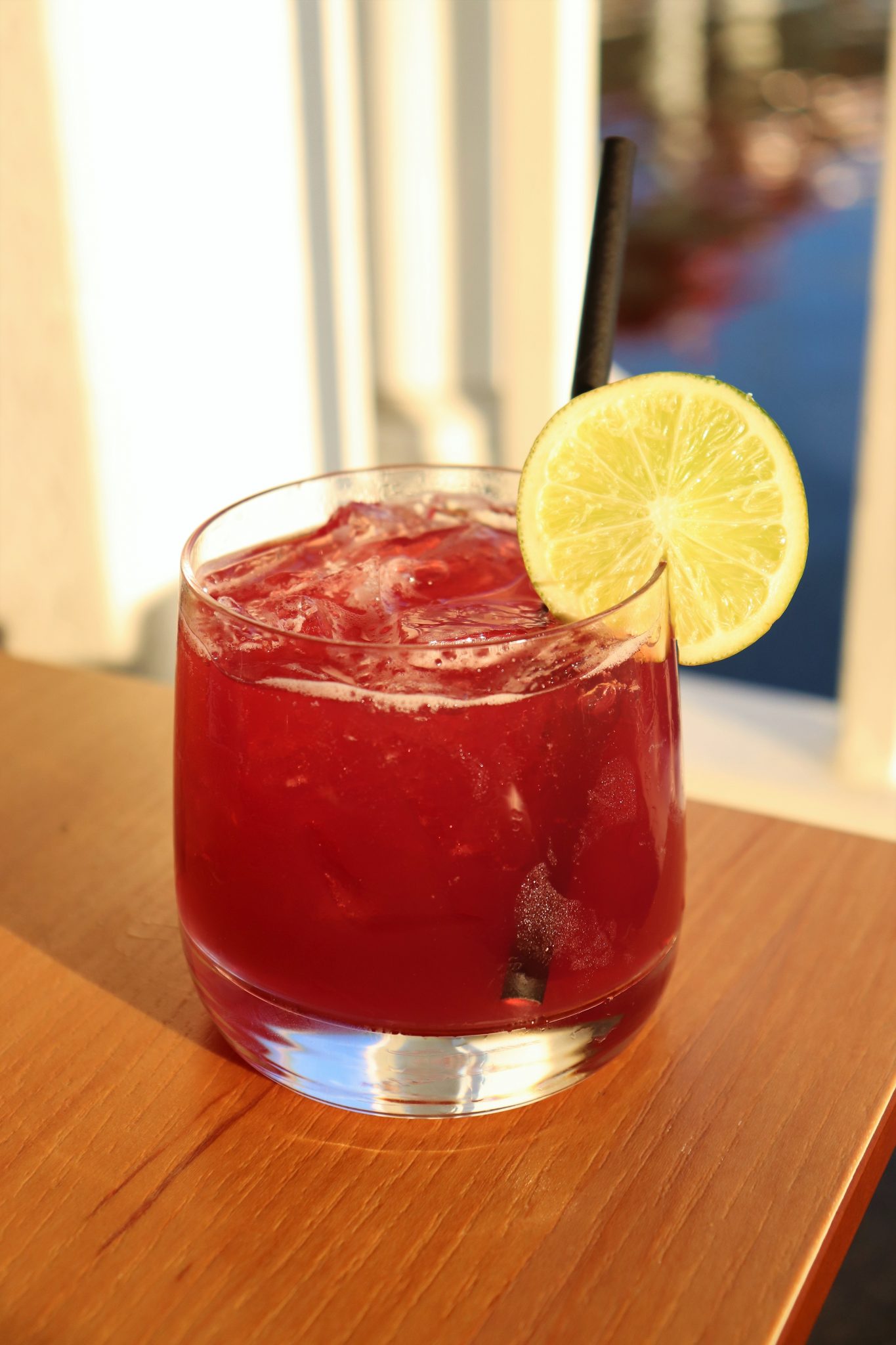 The Last Word (Lillet Blanc, Combier Crème de Pêche de Vigne, Hartley and Gibson’s Amontillado Sherry, fresh Lemon Juice, Agave Nectar, and Soda Water). This one was really nice and refreshing. Some of the alcohols in these drinks I hadn’t heard of, but this was kind of like a wine spritzer with peach flavor. Very refreshing and I think I actually preferred it over the first drink. 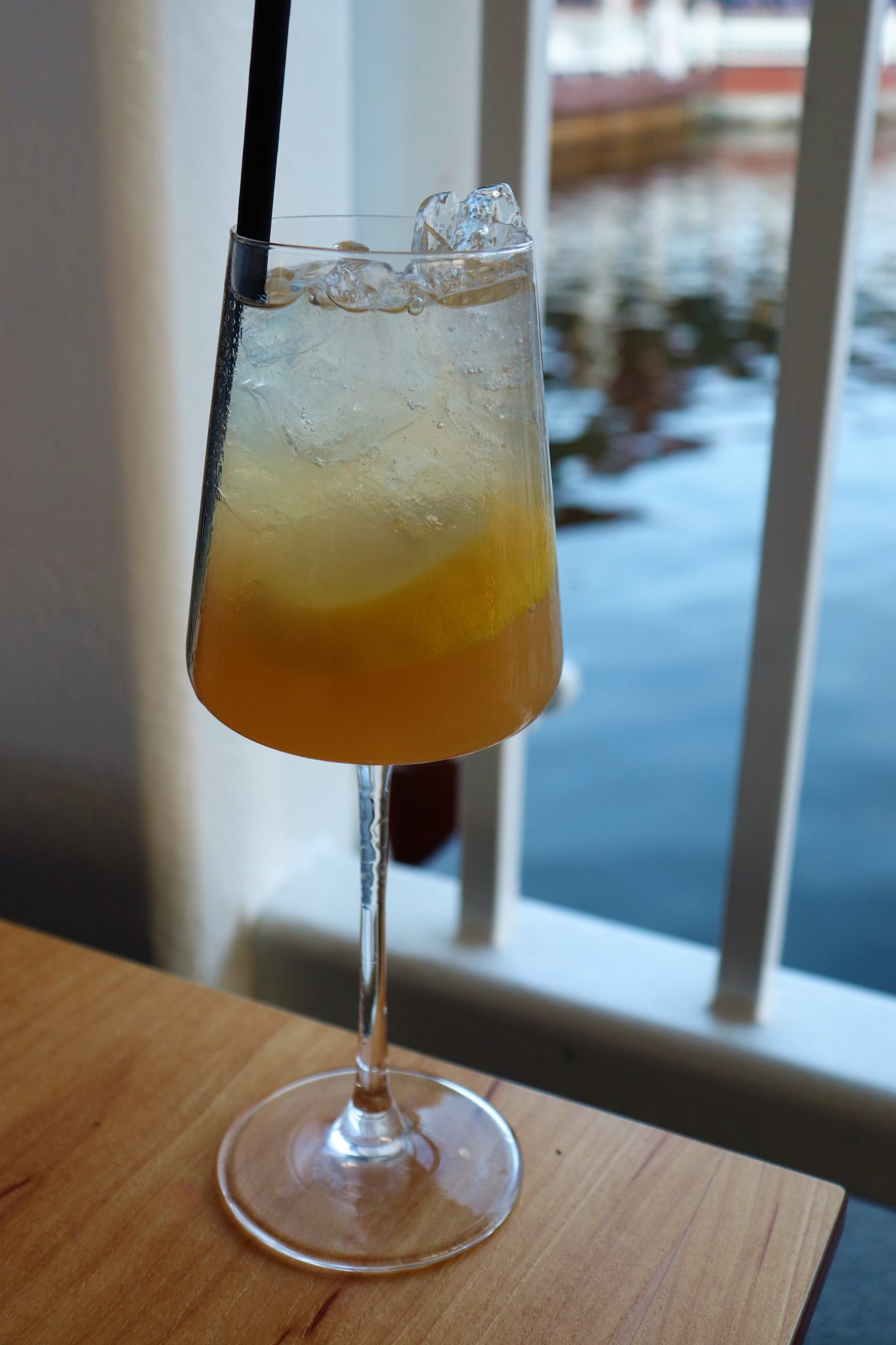 The Sequel (Bubbling Cocktail with Absolut Citron Vodka, Bacardi Gran Reserva Maestro de Ron Rum, Liquid Alchemist Passion Fruit, fresh Lime Juice and Agave Nectar). This was absolutely the most fun of the drinks! We had to take video of this one because it looked so cool when it came out. There is dry ice involved to make it actually bubble, and the effect is great. It tasted good too. 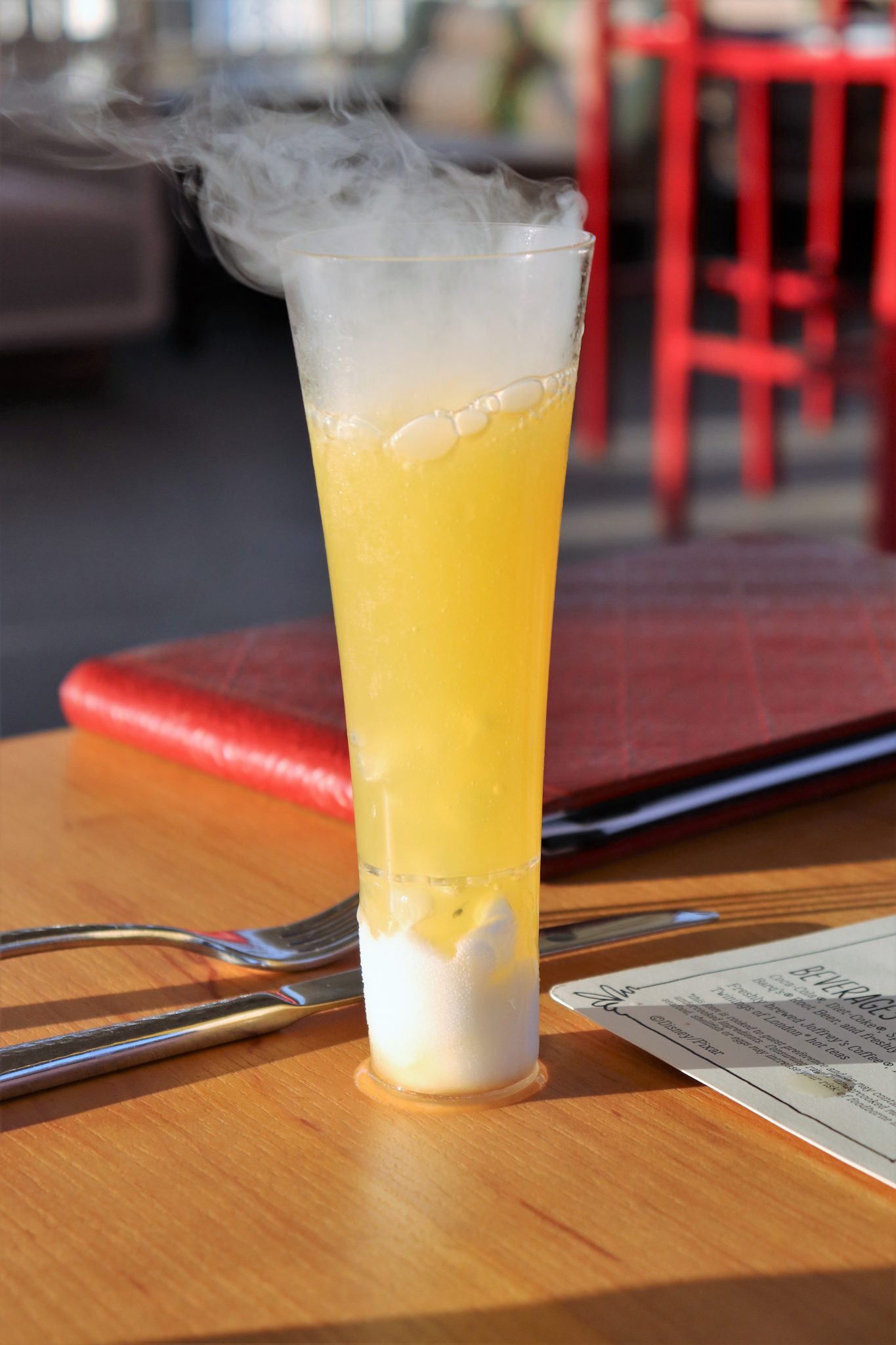 Celtic Cure (Jameson Irish Whiskey, Green Tea, Liquid Alchemist Ginger, Lemon Juice, topped with Club Soda and a dash of Angostura Bitters). Jason stated “this was delicious, as was everything at Lamplight Lounge.” He did notice that it had a strong ginger taste but he loves ginger so the more ginger flavor the better. 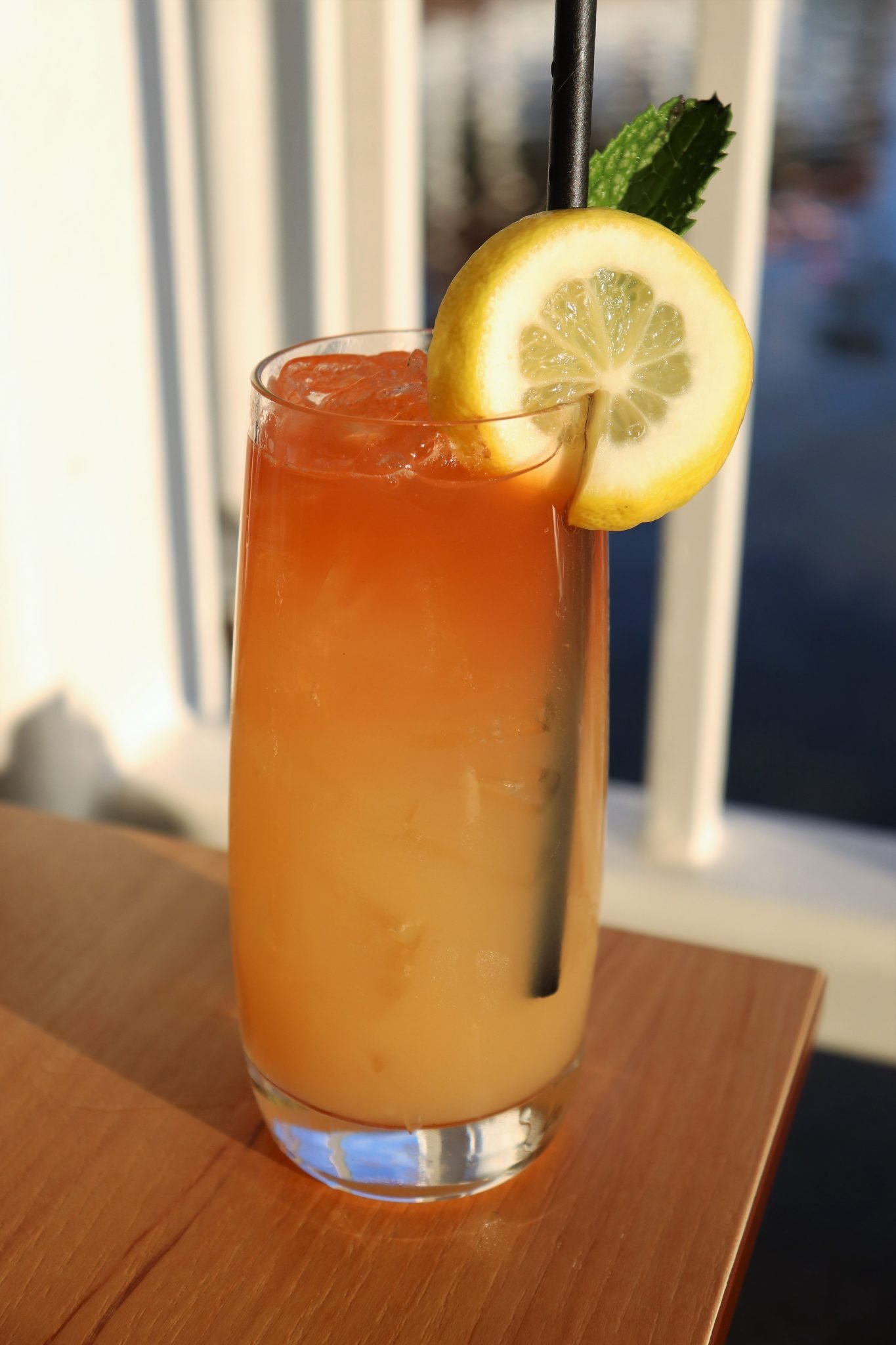 There were a lot of tasting sounding things on the menu, so it was hard to decide which direction to go in! In the end we actually decided to get a few different appetizers to split because they really sounded the best! This turned out to be a great choice because we loved everything we ordered. In fact, out of all three apps I don’t know if I could pick a favorite. They were all excellent.

Potato Skins (crispy Yukon Gold Potatoes with Brown Butter-Caper Yogurt, Smoked Paprika Aïoli, and Manchego Cheese). These looked very different from any typical potato skins I’ve had, but I cannot tell you how good they were. They were pretty large and great for sharing, and the paprika aioli was delicious. Even though we were full I kind of wished there were more so I could eat more of it! 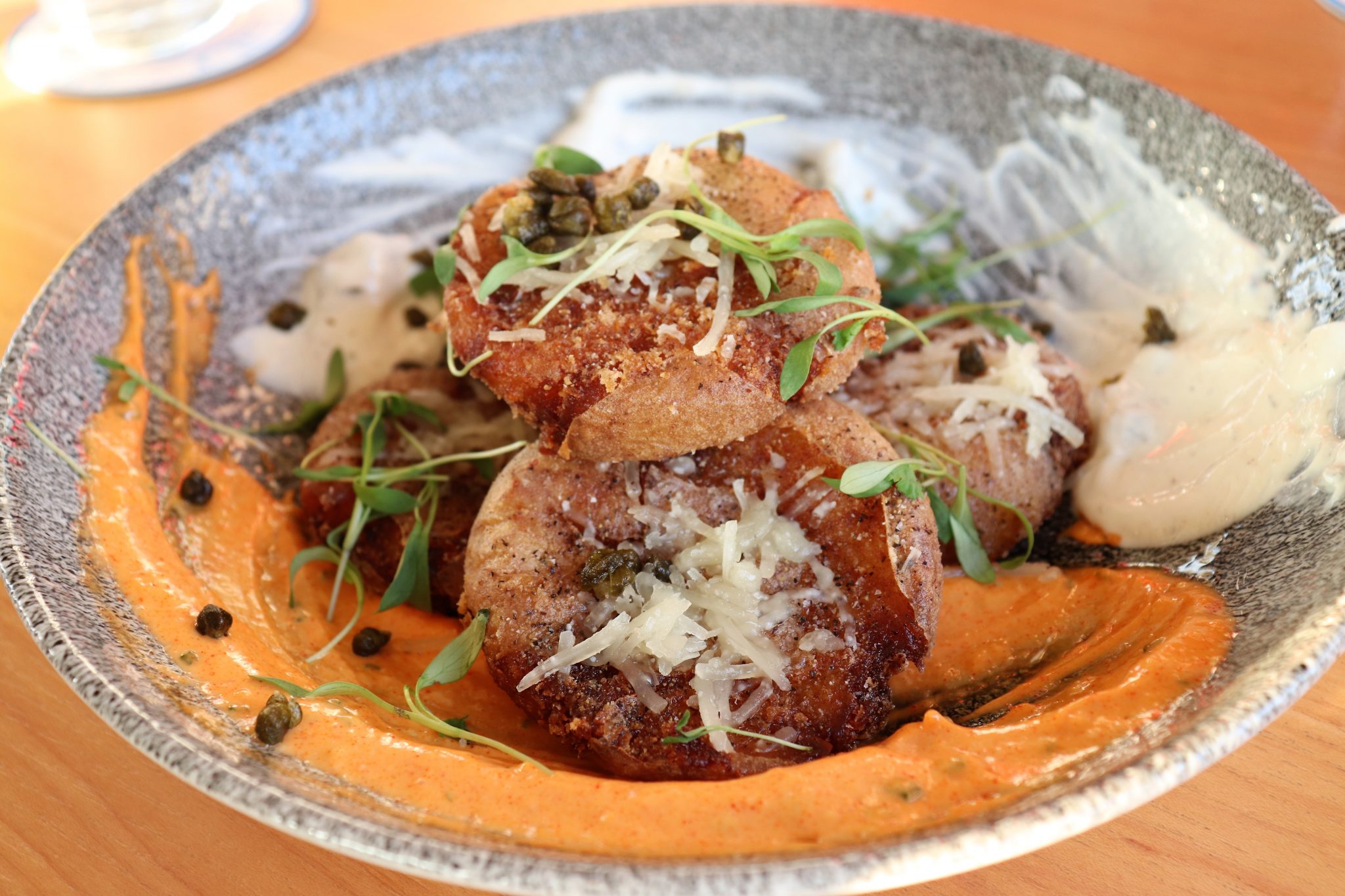 Tuna Poke (Yellowfin Tuna “Rice Bowl” with Magic Watermelon, Avocado, Edamame, Shishito Peppers, and Spiced Mango Nectar). Tuna isn’t always my favorite, but this was incredible. I wouldn’t have thought to mix tuna and avocado with watermelon but the result was the perfect combination of savory and sweet while still feeling really light. The spiced mango sauce added just a little bit of heat. The “rice bowl” was actually a dome covering the dish which we ate parts of as we enjoyed the poke. 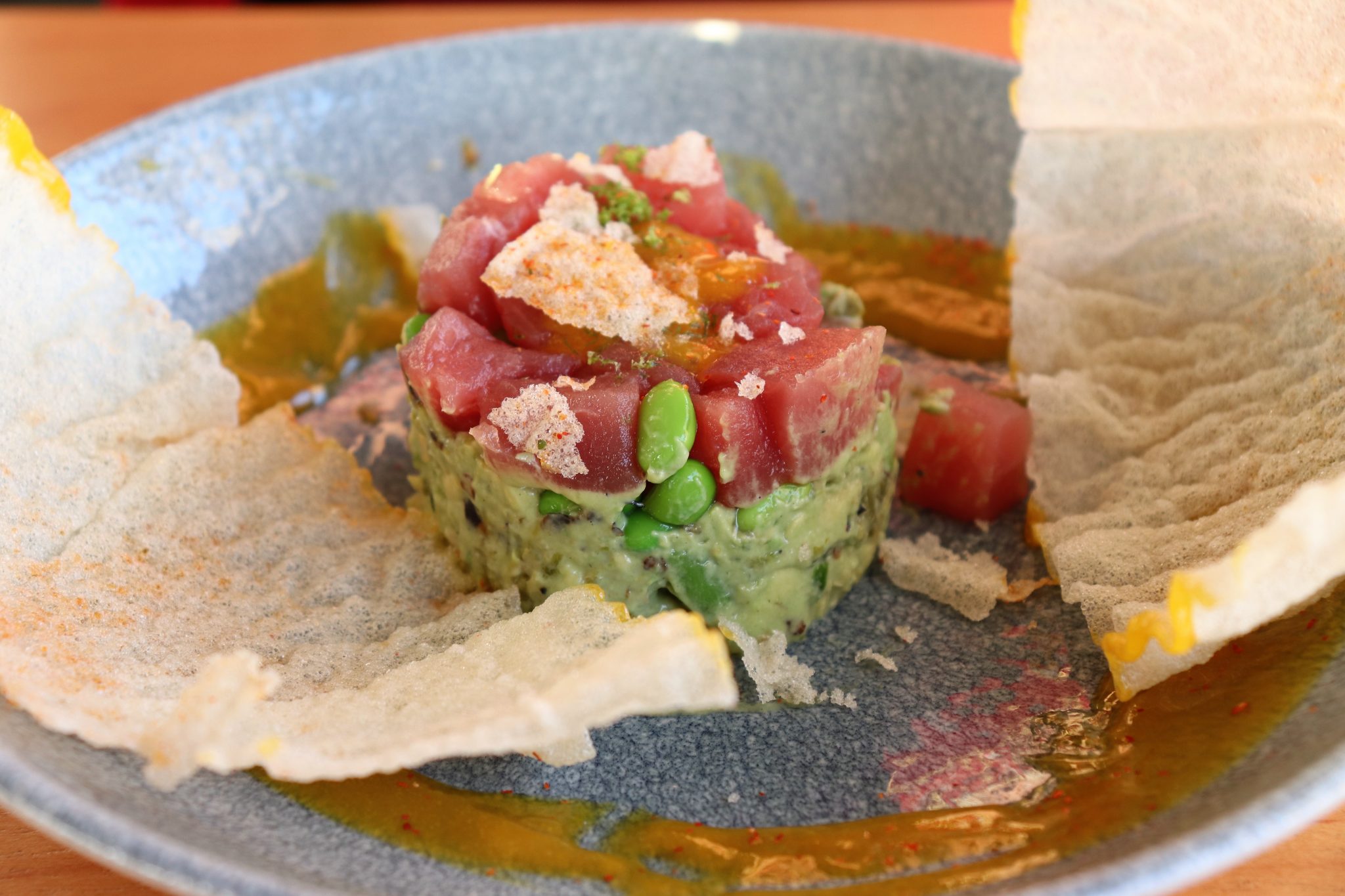 Lobster Nachos (warm Lobster with Black Beans, Aged Cheddar-Oaxaca Cheese Sauce, Pico de Gallo, and Chipotle Crema). This is a dish that came over from the Cove Bar, and it’s a good thing it did because I remember it being one of the best things I’d eaten in Disneyland – so of course I had to order it again! Lobster nachos are great, but it’s really the chipotle crema on here that makes the dish. 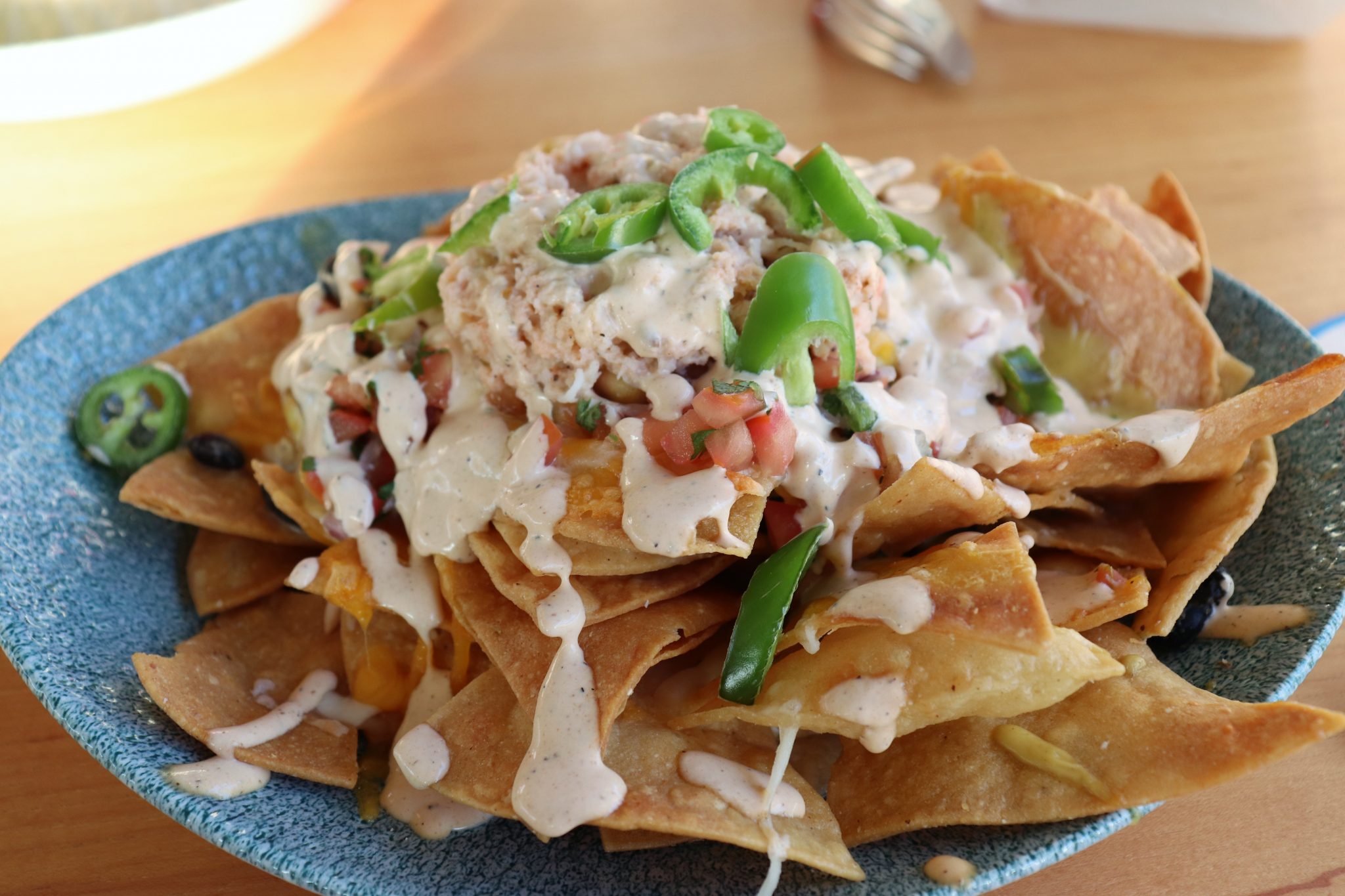 Since we hadn’t done full entrees and had shared three appetizers between the three of us, we decided there was still a little bit of room left for dessert! We went with the Donuts (warm fluffy Donuts with Dipping Sauces). Unfortunately something must have happened and our order was forgotten or delayed, because I think it took over half an hour from the time we ordered them to when we received them. Our server was very apologetic and did not charge us for them. And when we did get them they were hot, soft, and coated in delicious cinnamon sugar. Both the chocolate and raspberry dipping sauces were good – and even better together! 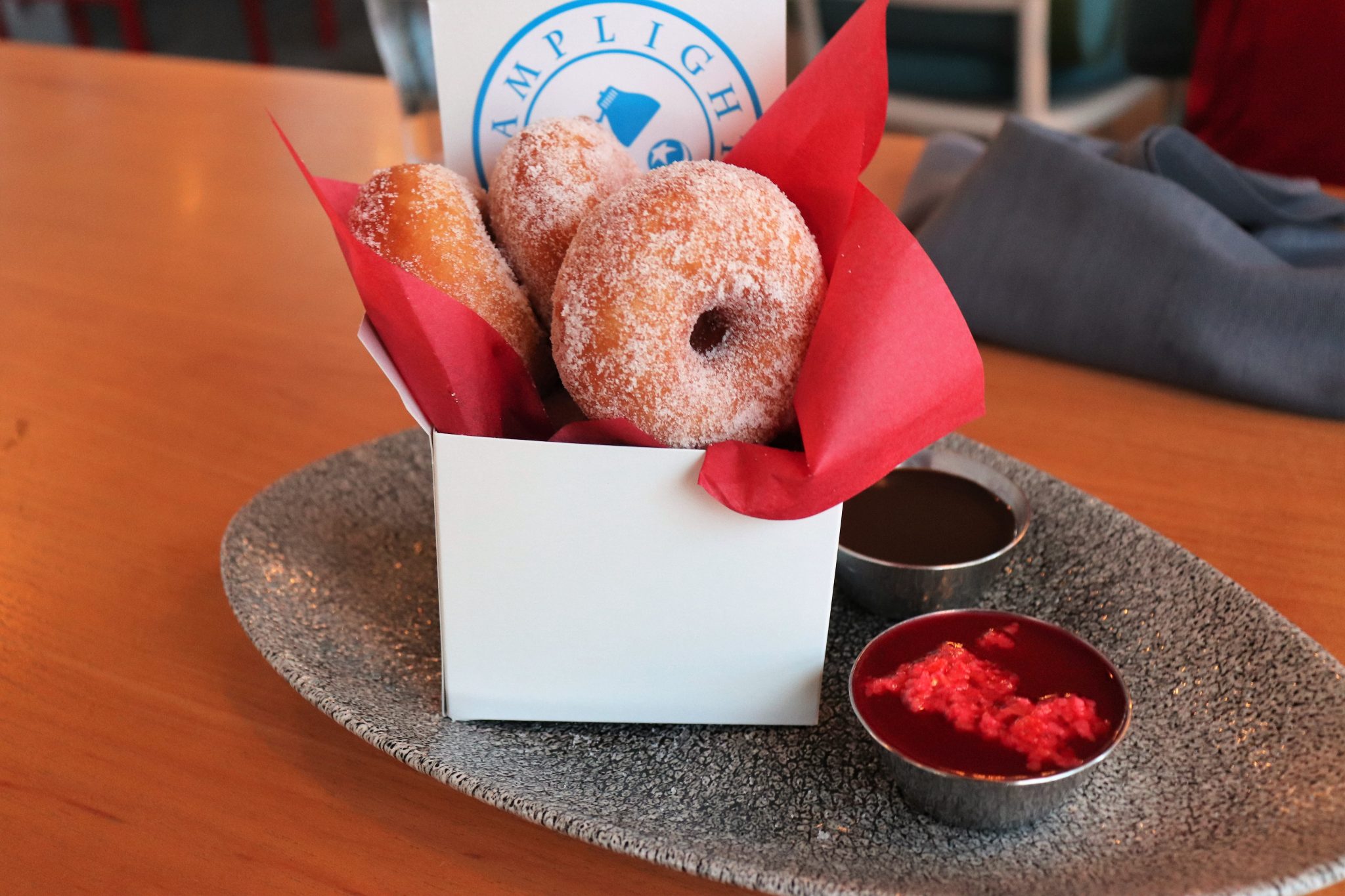 I honestly don’t think I could pick a favorite part of this meal because we enjoyed everything so much. The drinks, the food, and the donuts were all fantastic. I would absolutely come back here again the next time I’m at Disneyland – the only tricky thing would be deciding if we wanted to eat these same items again because they were so good, or trying something new!

Have you been to Lamplight Lounge? What sounds most delicious to you?