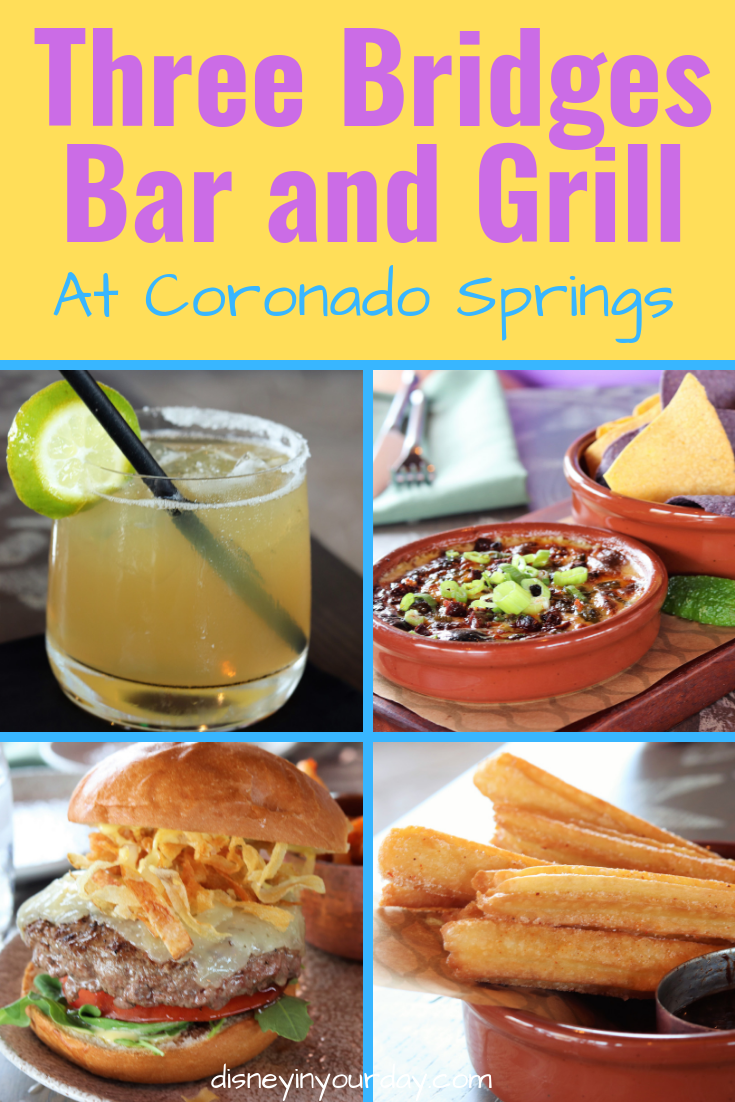 Since we stayed at Coronado Springs during our last trip to Disney World, I was interested in trying at least one of the new restaurants. We decided to do Three Bridges, which is located in the center of the lake at Coronado with three bridges connecting it to the other areas – hence the name. 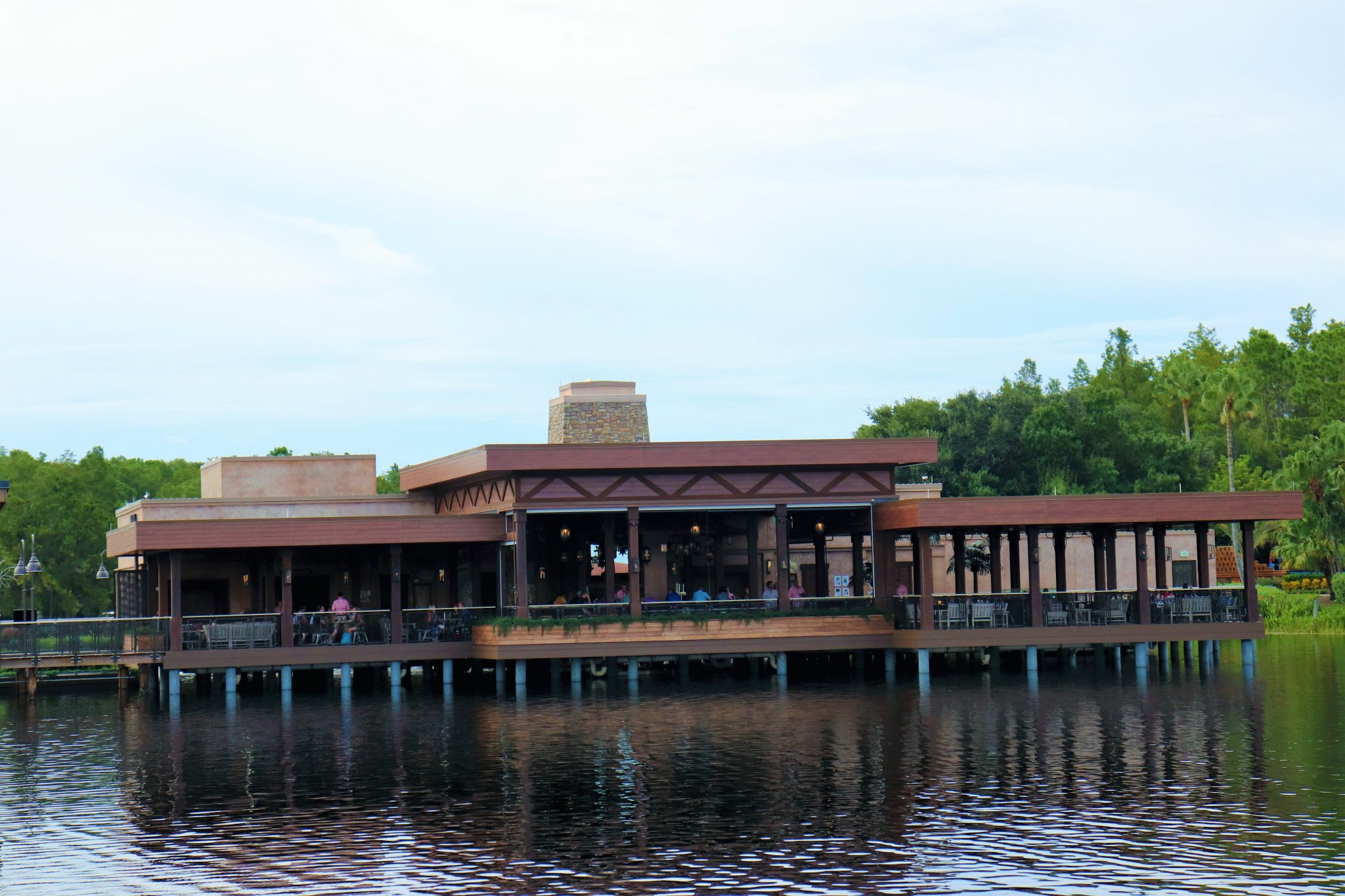 It’s a bar but also has table service, though you can’t make reservations for it ahead of time as of now.  All of the seating is outdoors. It’s a really nice area and it’s beautiful there. I’m sure it can get chilly during the winter but they also had a few fireplaces (they weren’t producing heat in August!) which might be nice in the winter. 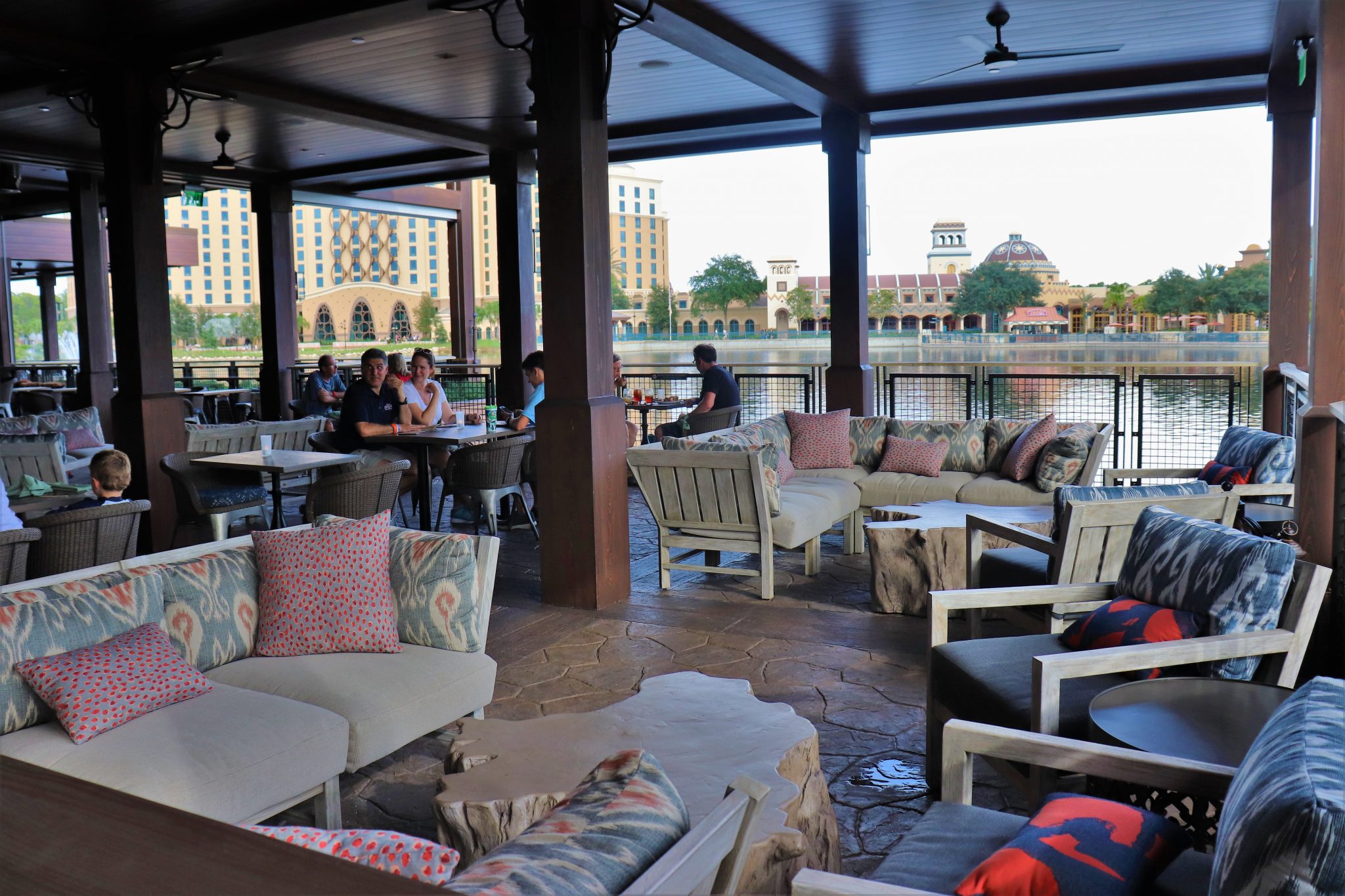 We had spent the day at Magic Kingdom and talked about going back for the fireworks after dinner, but we enjoyed relaxing and just hanging out at Three Bridges so much so decided to hang around for a few drinks and just stay off our feet.  I started with the Spanish margarita (Patrón Silver Tequila, Cardinal Mendoza Angêlus Original Recipe, Lime, Agave): 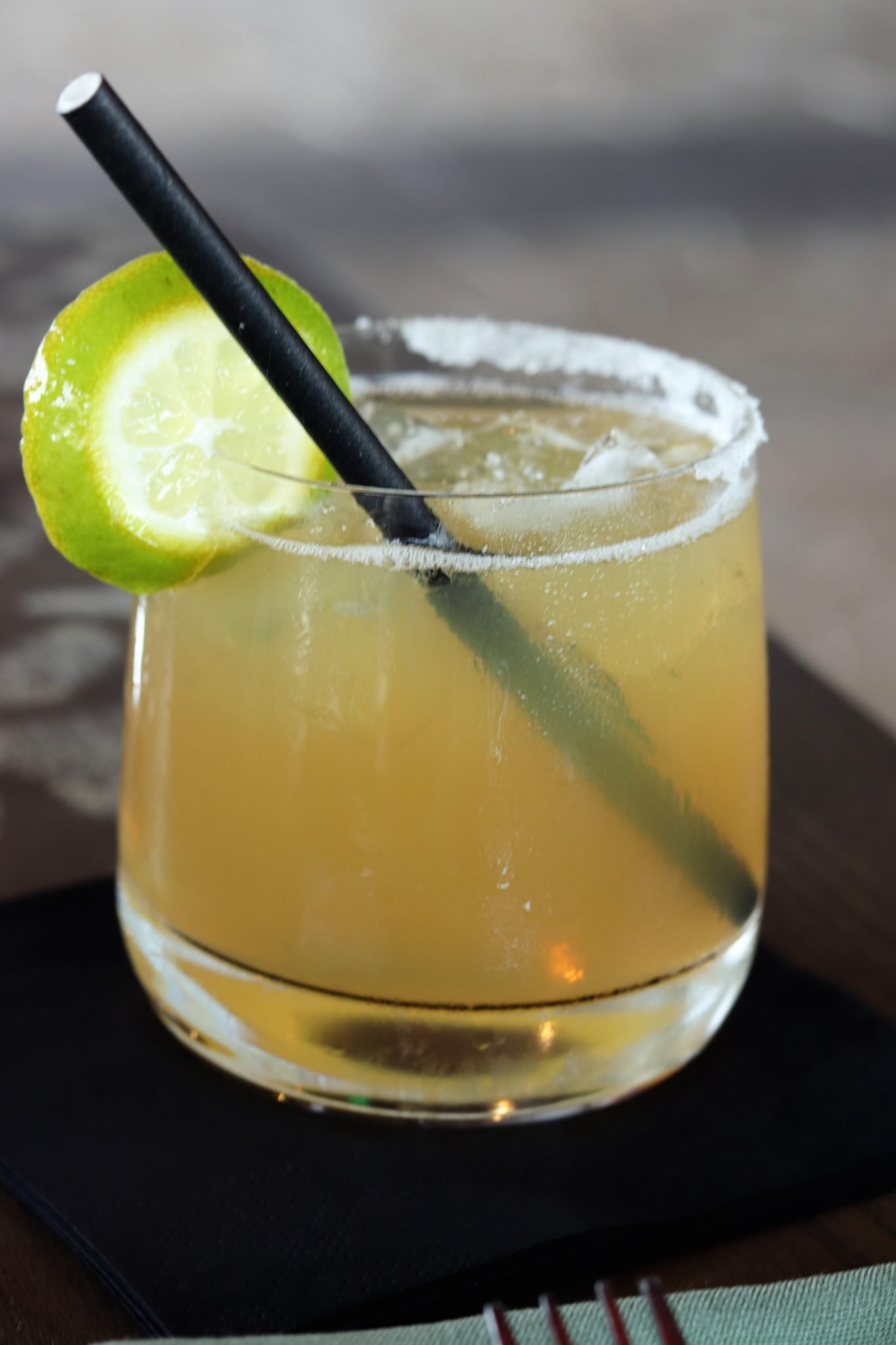 This was a really excellent margarita. It was strong but also with a hint of sweetness – nothing overpowering and very well balanced. 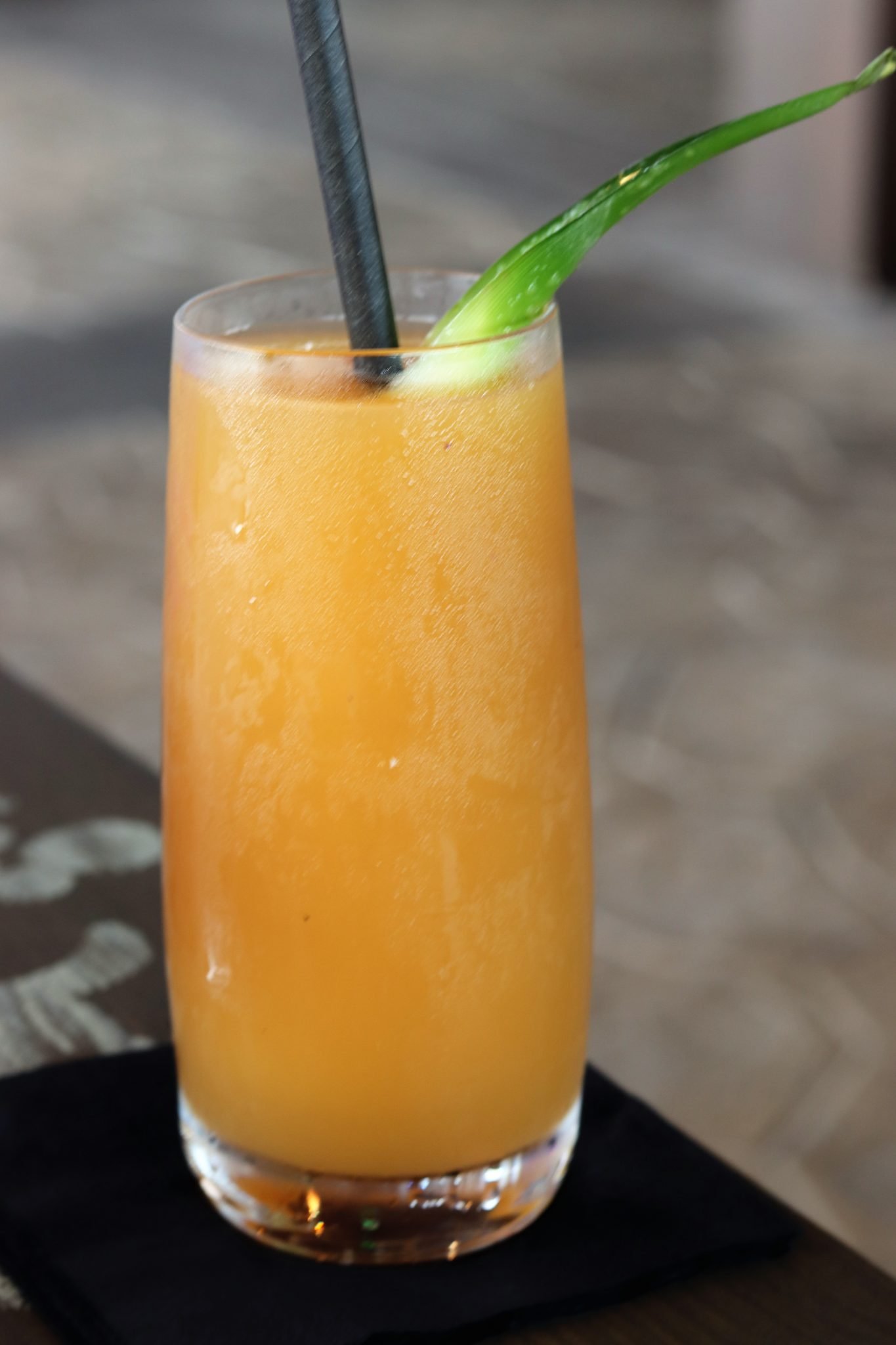 This was definitely on the fruity side but still really good. It was a frozen drink so a good option if you’re looking for that. And unlike many of the frozen drinks at Disney it was pretty strong – they don’t skimp on the alcohol. We found that to be the case with all of the drinks we tried here. 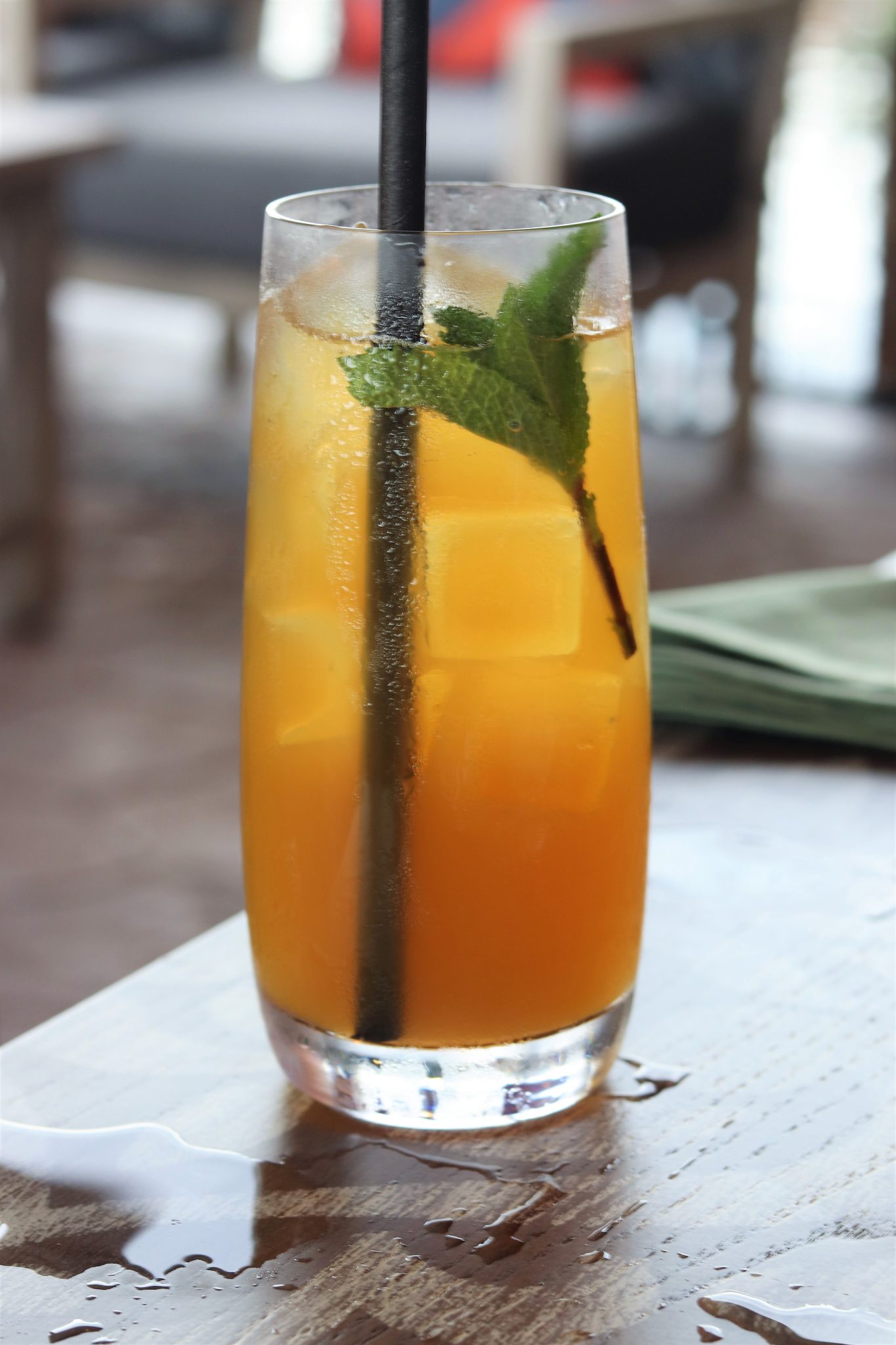 I love passionfruit – normally because it’s got more of a sour flavor and isn’t too sweet. This time however I found it to be bordering on “sickly sweet.” The flavor was really overpowering and I didn’t taste much of the mint in the mojito at all. I would probably pass on getting this one again, but all the other drinks we tried were excellent. 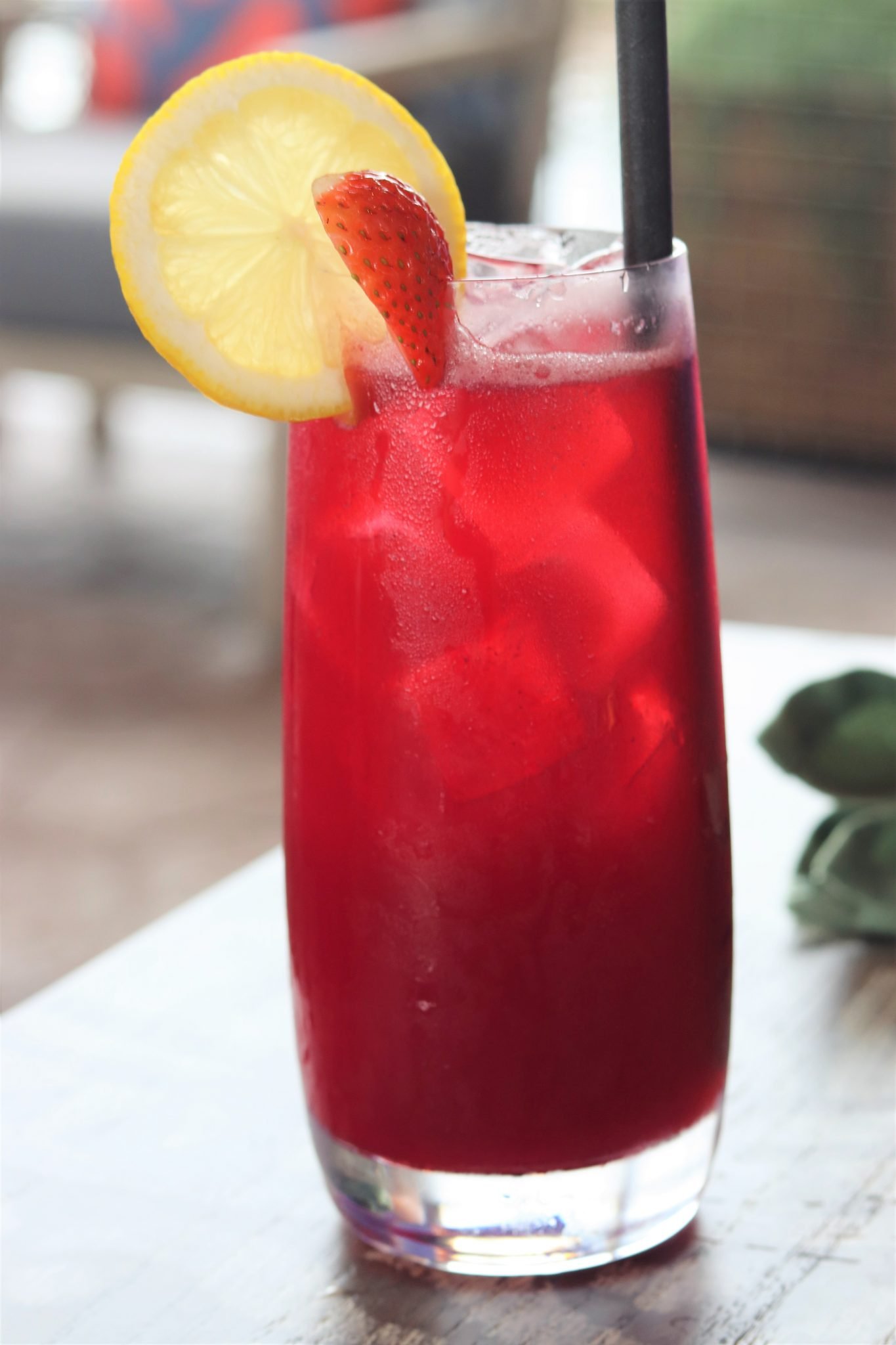 This was also sweet but not in that overpowering way, so if you’re a fan of the fruity drinks but don’t want that more artificial tasting sweetness I would recommend this one. It’s more refreshing and a really nice combination of strawberry and lemon.

To begin the meal we decided to start with the Warm Manchego and Oaxaca Cheese Dip (chorizo, poblano peppers, tortilla chips):

The cheese dip was really excellent. It had a bit of a kick to it and I enjoyed the spiciness. Great flavor. The chips were just standard tortilla chips. I would love to see a higher quality chip here than tostitos, but it still worked as a vessel for the cheese.

For entrees we ordered two and then split them, so I got a chance to try both of them. One of these was the Three Bridges Signature Burger (crispy potato, Manchego cheese, roasted garlic-lemon aïoli, arugula, and tomato served with smoked paprika fries or fruit): 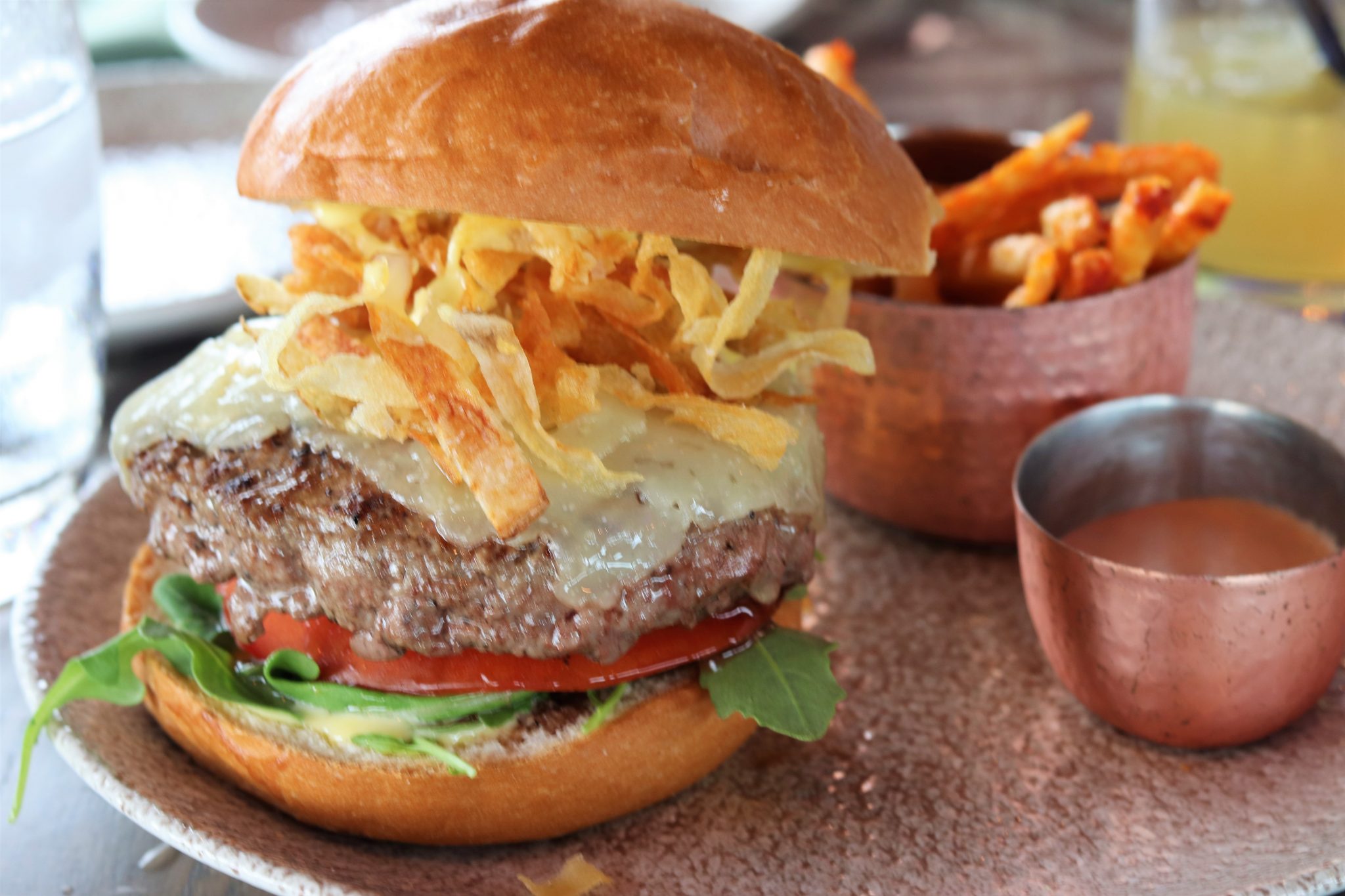 I’m glad we split it because this burger was HUGE and it would be a lot for one person to eat. But it was so, so good – if I had ordered it just for myself I probably would have eaten the whole thing just because it tasted so great. It’s easily the best burger I’ve had in Disney World (though I’ll admit I don’t order a ton of burgers when I’m there). But I’d also say it’s in the top 5 for best burger I’ve had anywhere. It was cooked well and had a ton of juicy flavor. The cheese was good, the crispy potatoes added a nice bit of crunch, and the bun held up to everything. I think the highlight was the sauce, which was  garlic lemon aioli.

The burger was also served with fries that were seasoned with paprika. These were very good and came with a dipping sauce that was tasty too.

For our second entree we went with the Crispy Chicken Biscuit Sliders (hot honey, blue cheese, and creamy slaw served with smoked paprika fries or fruit): 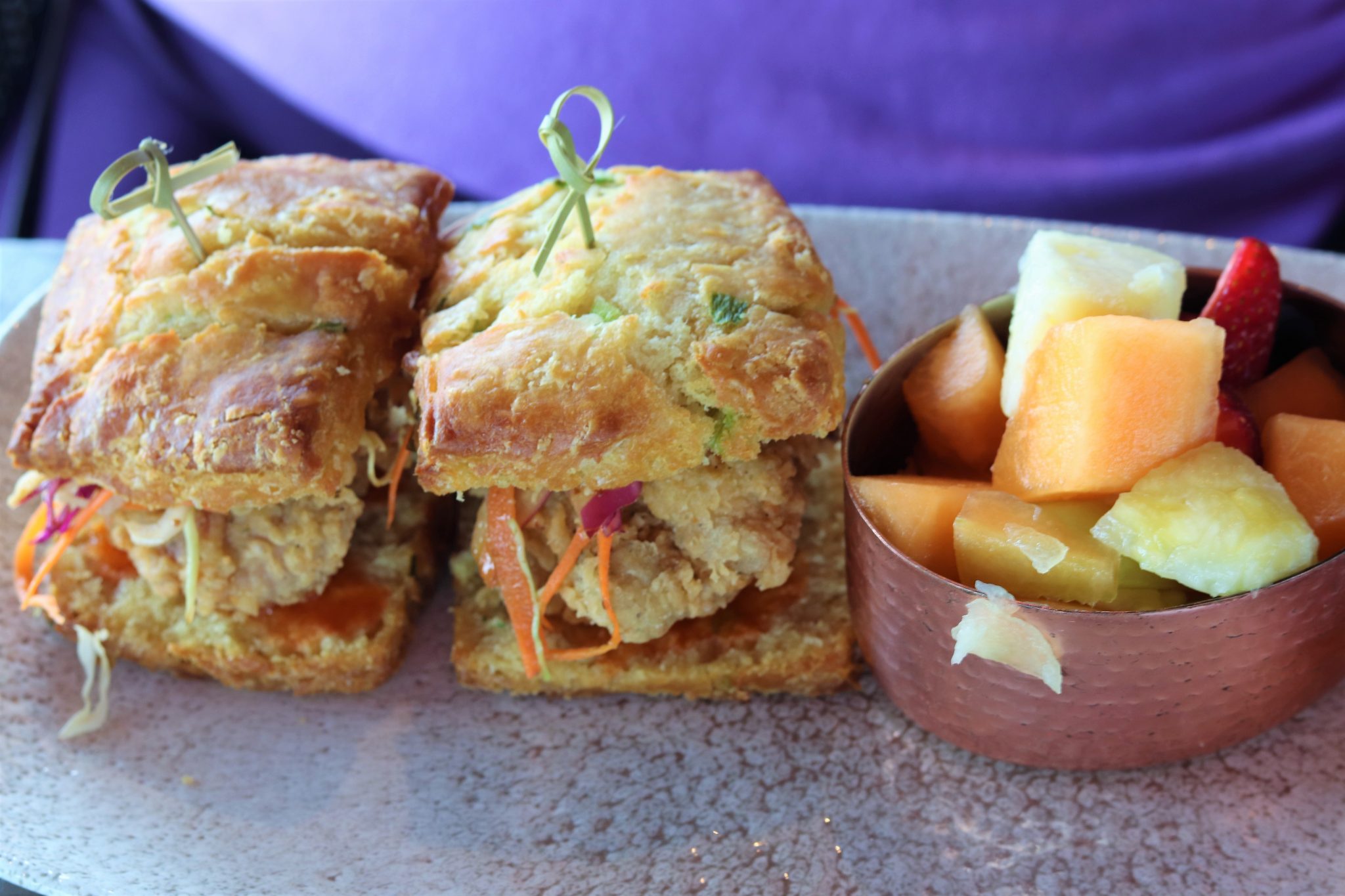 Our opinion on this was a little split: my friend wasn’t crazy about them but I really liked them. She thought the chicken tasted “weird” but I enjoyed it. Our server explained that the chicken was actually brined and then fried, which gives it a bit of a different flavor. I thought they were breaded nicely and the sandwich as a whole was very good. It was served on a jalapeno corn bread, had a nice spicy sauce, and the blue cheese spread was very good with actual chunks of blue cheese in it.

Finally we had to share dessert! We went with the Churros (Espelette pepper sugar, chocolate sauce): 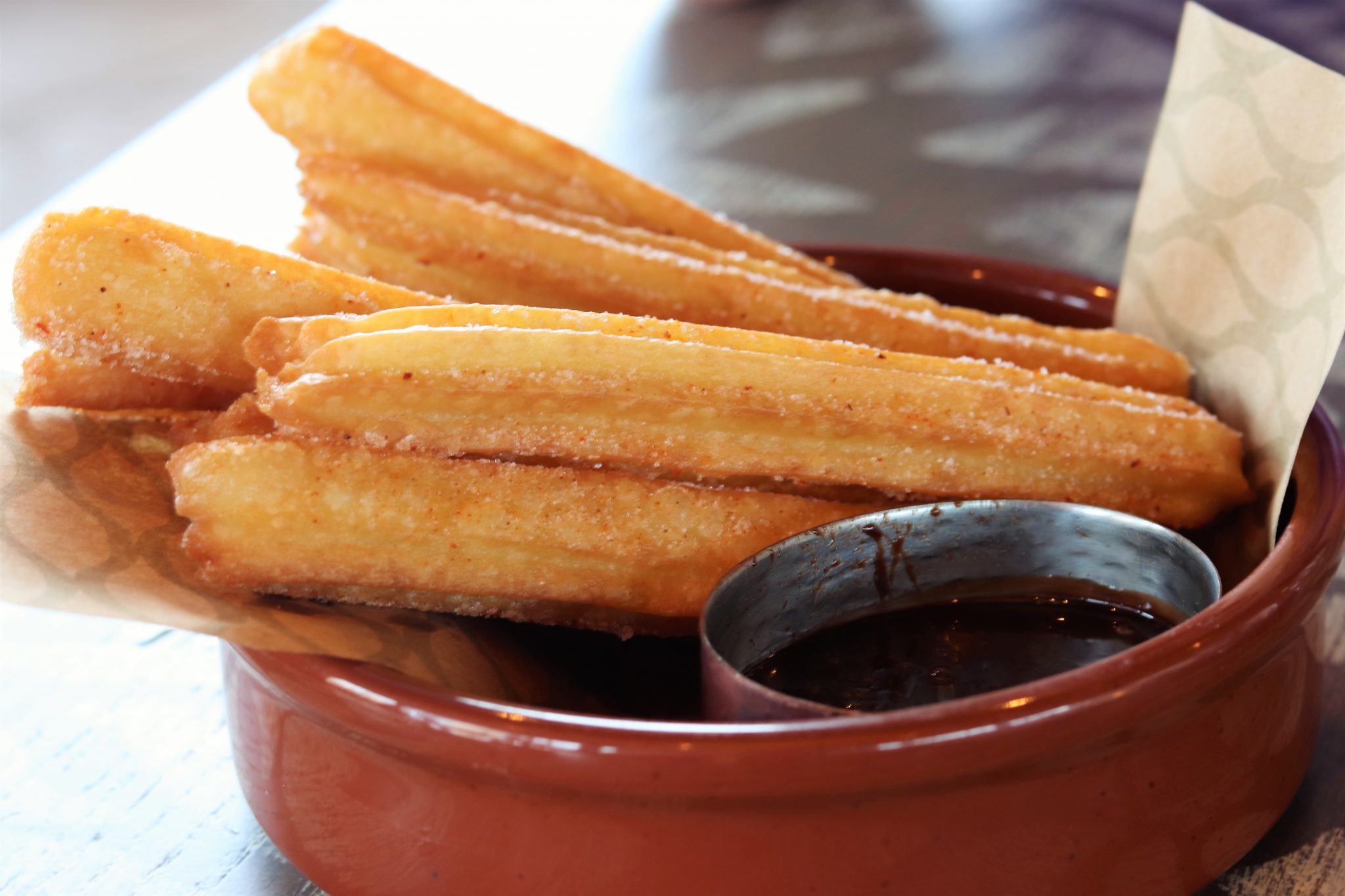 Like everything else in our meal these were also very good. They were extremely hot when they came out so we knew they were fresh. They were higher quality than a theme park churro and the dipping sauce was rich and chocolately.

Our server here was great as well. His name was Mario and he was super helpful and friendly. He also put up with my friend who definitely gave him a bit of a hard time throughout the meal, joking around with him. He was a trooper and I feel like he went above and beyond for us.

Overall the only downside of Three Bridges is that it’s at Coronado Springs, which is a place I don’t visit all that frequently! If this restaurant was at Disney Springs or some sort of place that was easier to get to (or that I stayed at more often) I think I would be here a lot. It just made for a really pleasant evening with some excellent food and drinks. Honestly one of the best non-signature meals I’ve had at Disney in a long time.

What would you most want to try at Three Bridges?