If you’re looking for an easy and comfortable Disney related Halloween costume, consider going as the Incredibles!  Not only is it pretty easy to put together, but Incredibles Halloween costumes are something that the whole family can get in on, no matter if you have kids or not.  My husband and I dressed up as them recently for a Halloween themed 5k, and it was a good costume option because it was easy to run in.  If you’re interested in making your own, here’s what I did:

I ordered the shirts from Jiffyshirts.com.  I wanted plain, long sleeved red shirts and was having a tough time finding any in the stores, but that website has everything you could want at super reasonable prices!  I then went to Michaels and bought iron on transfers specifically for color/dark clothing.  This isn’t like the typical ones where you print it backward.  Make sure you cut out the whole shape first and then iron it on the exact way you want it!  Also, the indents on my iron left some streak marks on the design, so I would consider not pressing so hard next time to hopefully avoid that.  I found the image just by doing a google search for the Incredibles logo!

Almost everything else we got from Amazon.  For the pants, I got red leggings.  These were super comfortable and stretchy.  And they are opaque, not see through like a lot of cheap leggings tend to be.  I got my husband red sweatpants.  We both wore black shorts that we already had over our red pants.  And we found some orange fabric we already had and just cut out some strips to put around our waists to make the orange belt.  We were running low on time so we just safety pinned the belts on.

I originally found the template and instructions for making the mask over at Spoonful, which is no long around, but you can find a similar one here.  They are meant for kids but they have two sizes, and the bigger one worked for us.  I just traced the template onto black felt, cut it out, and then attached some elastic so we could wear them.

Because we were running a 5k, we didn’t actually want to wear boots like they do in the movie.  So we had our black sneakers and just wore high black socks to give the illusion of black boots.  For the gloves, my husband wore a pair of black gloves he already had.  I wanted the really long gloves, so I ordered a pair off of Amazon.  They were perfect and I think really added to the look! 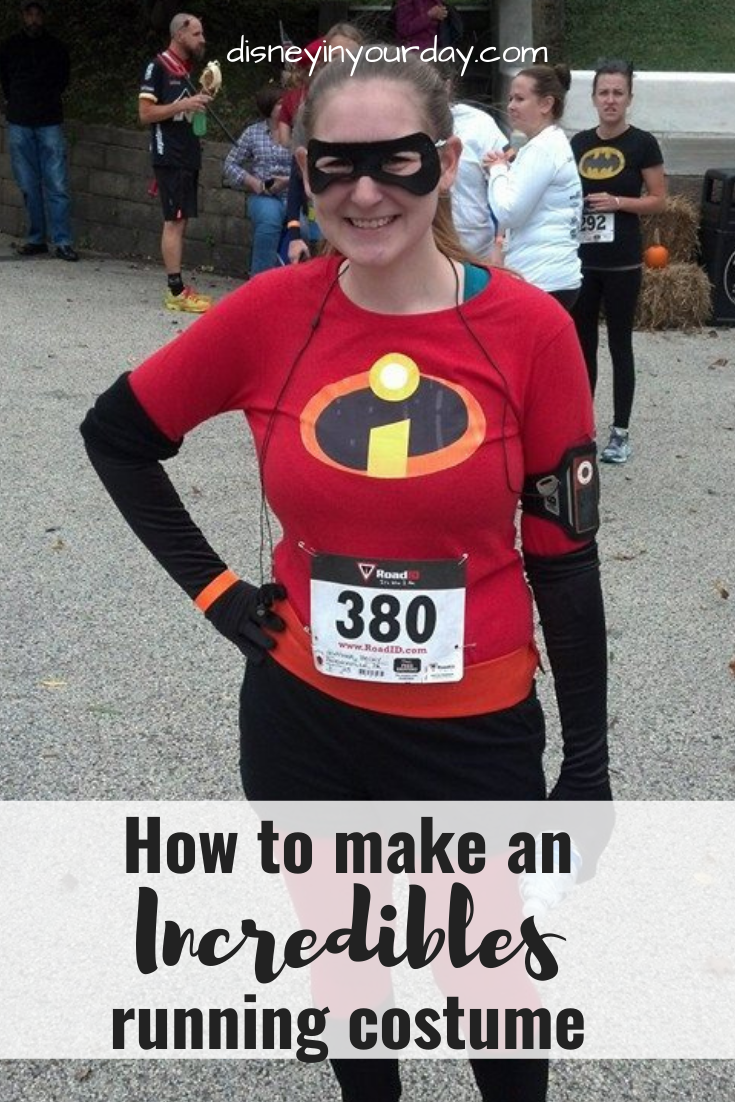 Are you doing something Disney for Halloween?  Have you ever done Incredibles Halloween costumes?