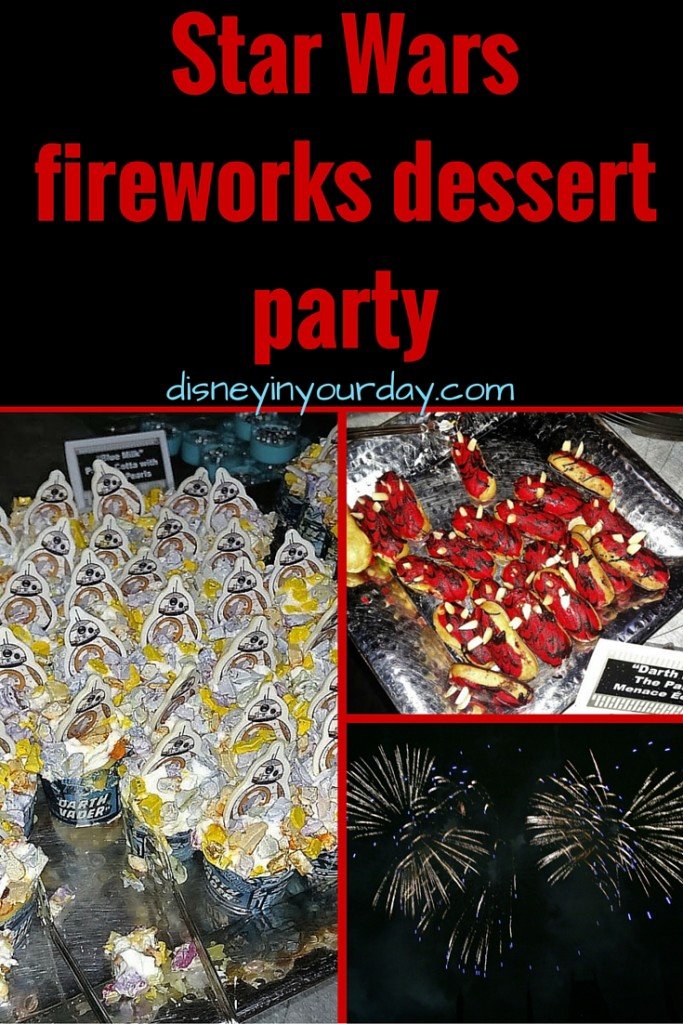 One thing I was very excited to do on my last trip to Disney was see the new Star Wars fireworks show at Hollywood Studios.  I’ll talk about the actual fireworks more a little later down (I loved them), but they are actually going to totally re-do this fireworks show for the summer and make it into a unique spectacular including projections, so it will only get better.  But because I was excited for the fireworks I decided to go all out and book something else that they were offering – the Star Wars fireworks dessert party.

This event was held on select nights at Hollywood Studios and cost $69 per person.  It included food, a bar with specialty Star Wars themed cocktails, reserved seating for the fireworks show, and a take-home Chewbacca stein.  It starts about an hour before the fireworks begin – mine began at 8:45 for a 9:45 show. 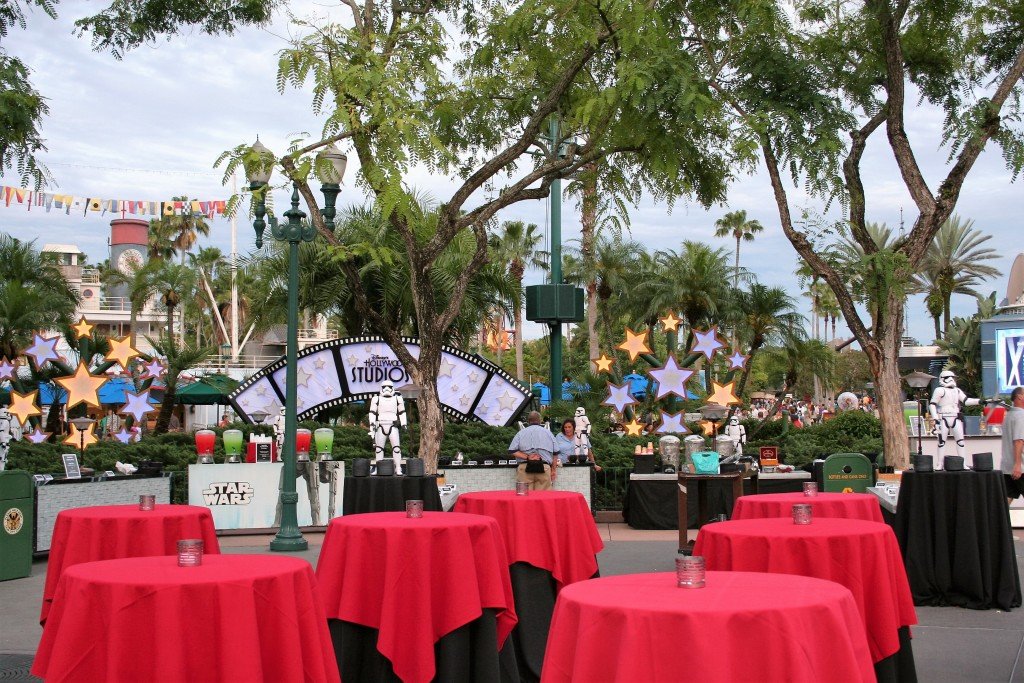 The “seating” area (I say seating because there weren’t actually any chairs) is located in front of the stage and to the left.  It’s a great view of the fireworks so you’re getting that.  There are small standing tables set up around the roped off area for you to use while you enjoy your food and drink, but no chairs so if you’re thinking about booking this, keep that in mind.  I was pretty happy with the location.

I was really impressed with the food selection.  For the price you’d hope there was a lot of good food, but with Disney you never know what they might overcharge for.  Not only did they have desserts, they had a whole table of more savory options as well.  I had a little bit of everything and went back for some favorites. 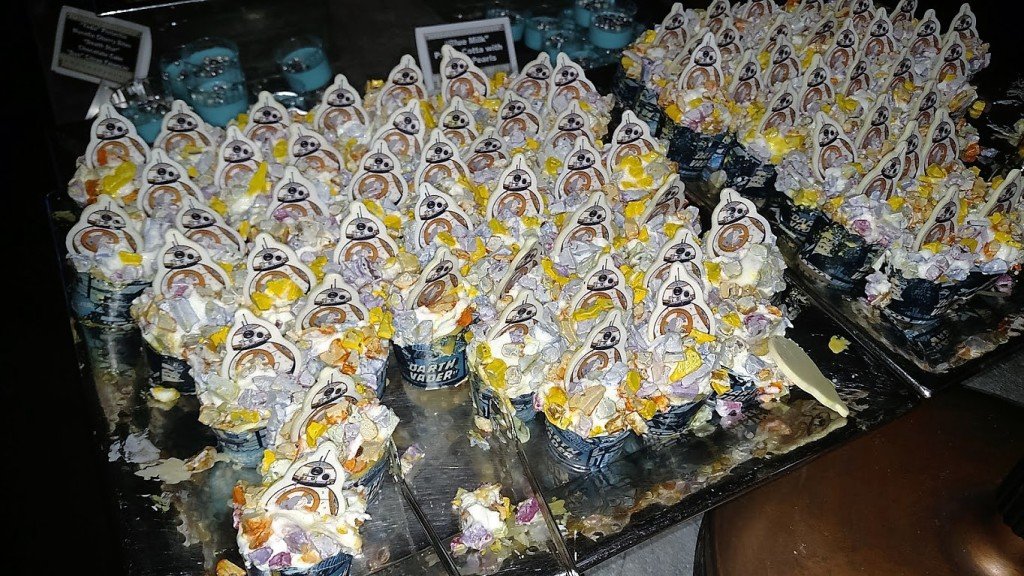 The dessert table featured two mini cupcakes – a Darth Vader cupcake that was chocolate and peanut butter, as well as a BB-8 cupcake that was lemon and buttercream.  These are actually smaller versions of cupcakes that are available in a much larger size throughout the park.  I apologize that my photos aren’t the best – it was very dark in the dessert party area. 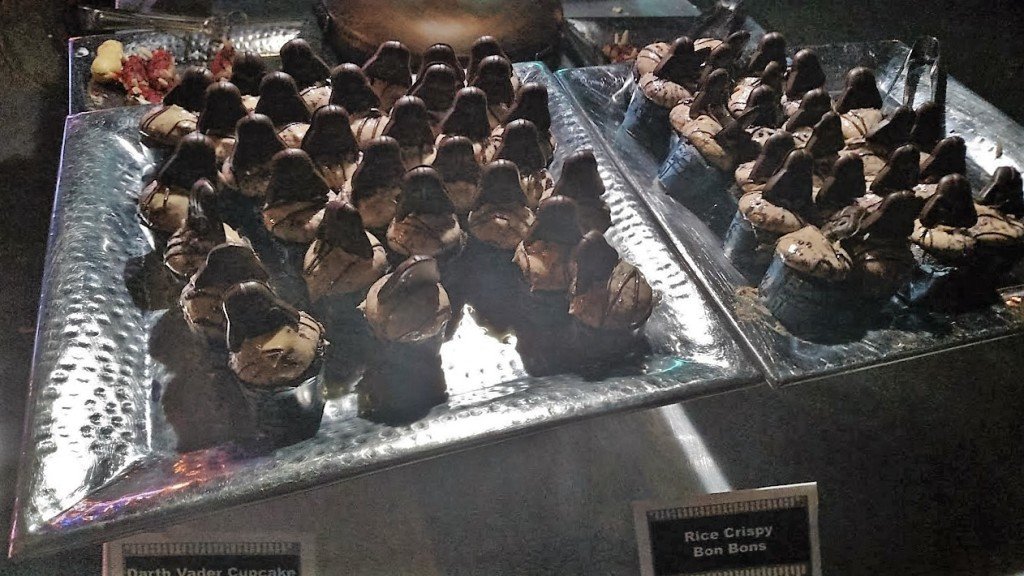 I love the themeing they did with the desserts here.  The eclairs are “Darth Maul” decorated and they look so cute!  They are mini eclairs, just like everything else is mini.  I like this because it lets you try everything.  I was pleasantly surprised by the center, as it was something pink and fruity! 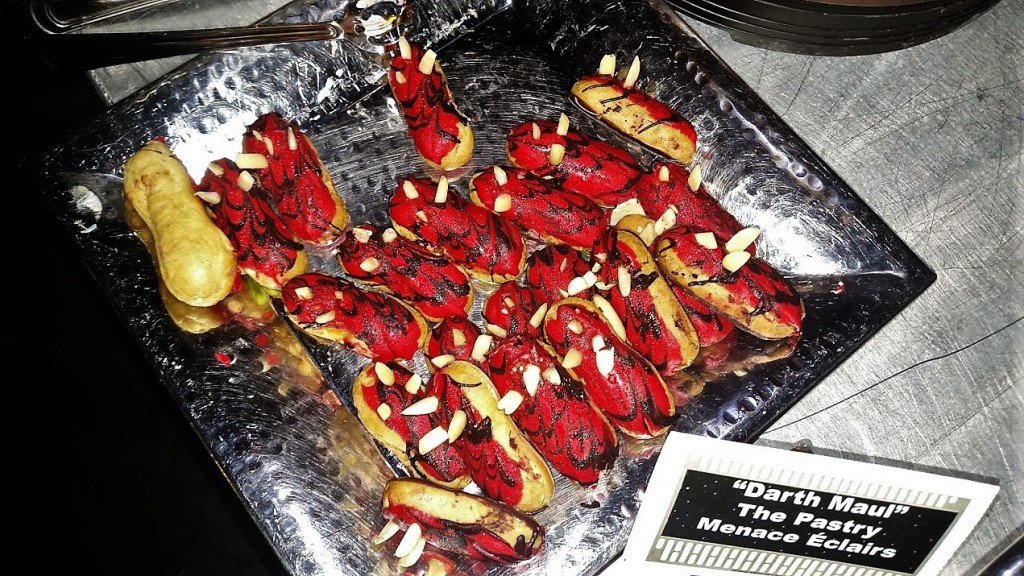 The blue milk panna cotta was also delicious – I would have gone back for another one of these if I wasn’t so full!  By them on the table were a couple of other pastries, such as small chocolate cakes, and pistasio pastry, etc.  I didn’t have any of these because they didn’t seem as “interesting” as some of the other options.  There was also a big dessert bread pudding that I didn’t have room to try! 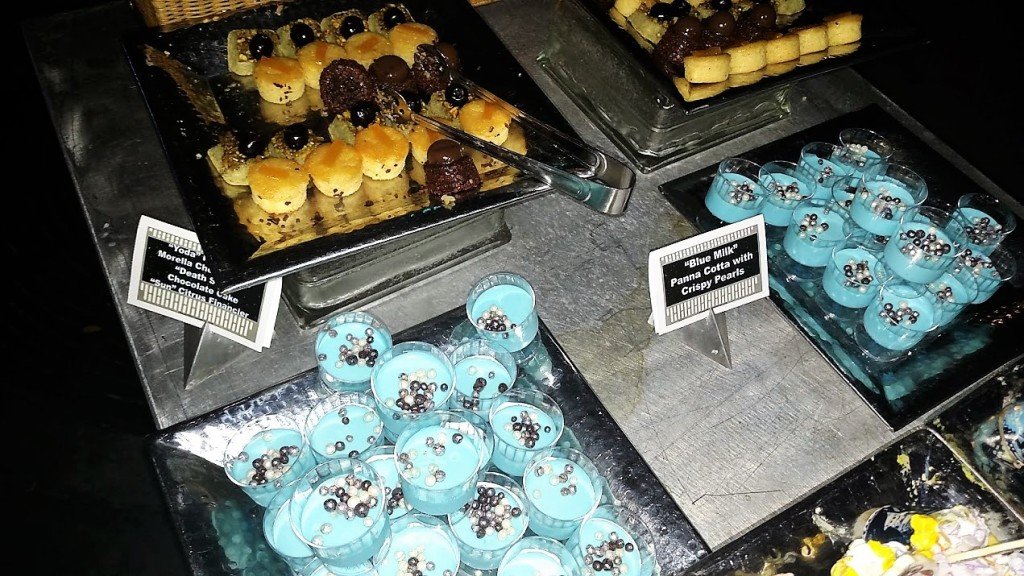 There were a couple more “typical” Disney dessert items, like Mickey rice krispie treats.  Another neat thing that the had was an ice cream cart brought in, where you could get a selection of the Disney ice cream bars that are normally served. 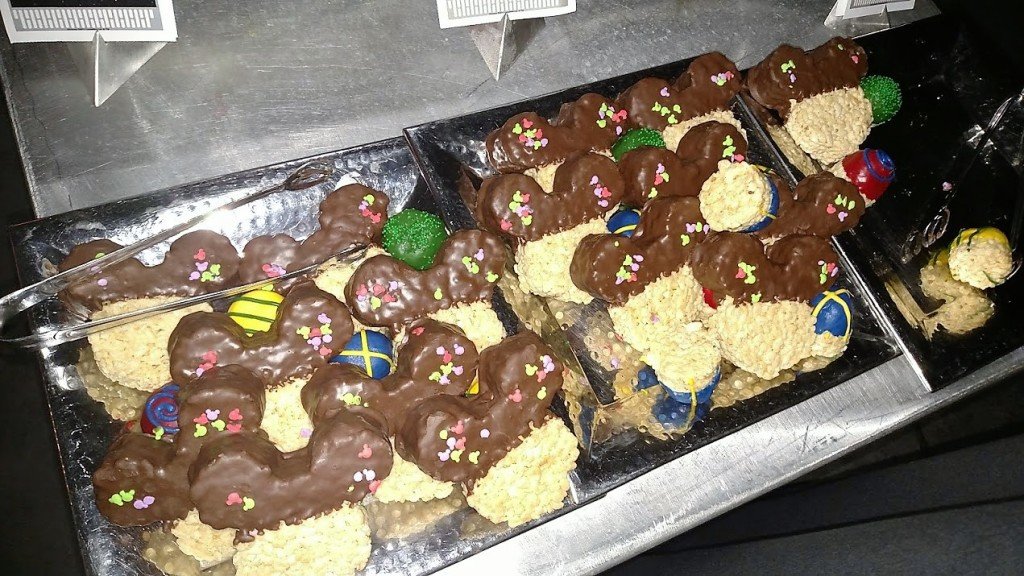 The final dessert item, and a really unique one at that, was freeze-dried nutella truffle.  I don’t know exactly what is in nutella truffle but it was delicious.  You could get it with either “light side” (raspberry) or “dark side” sauce (chocolate).  I got both 😉 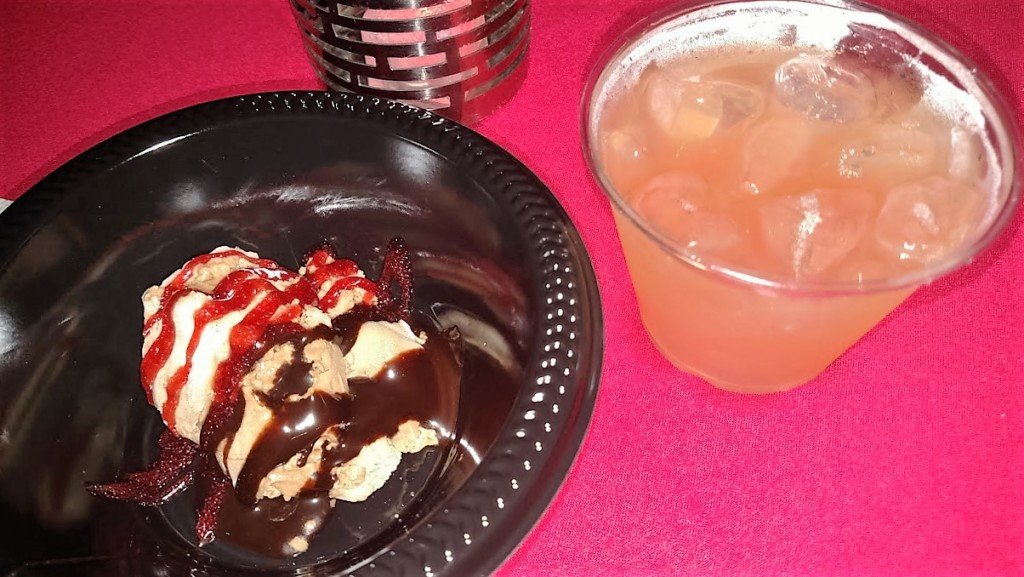 On to the savory foods – they had some “lightsabers” of a couple of different varieties.  You could get one with berries on it, and two others with different types of cheese.  One type of cheese was accompanied by an olive, and the other by a tomato. 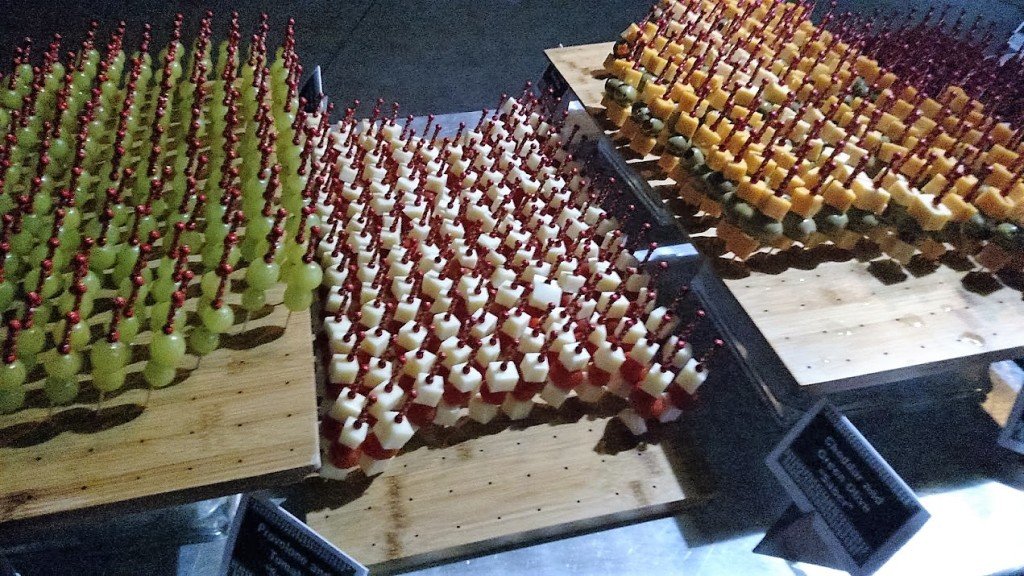 Additionally there were three types of bread products.  A C-3PO cracker, “Rey’s ration biscuits,” and pesto chips.  The loved the ration biscuits.  Even though they sound unappealing if you’ve seen the movie, they were delicious!  They were made with sea salt and I’m a big fan of salty foods. 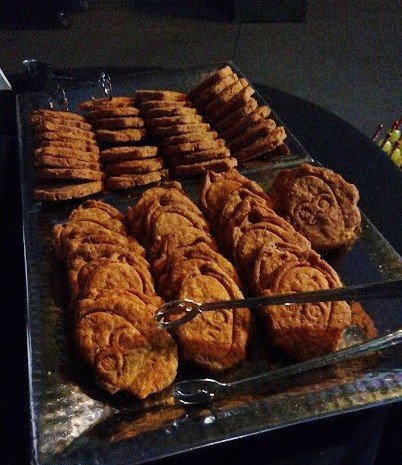 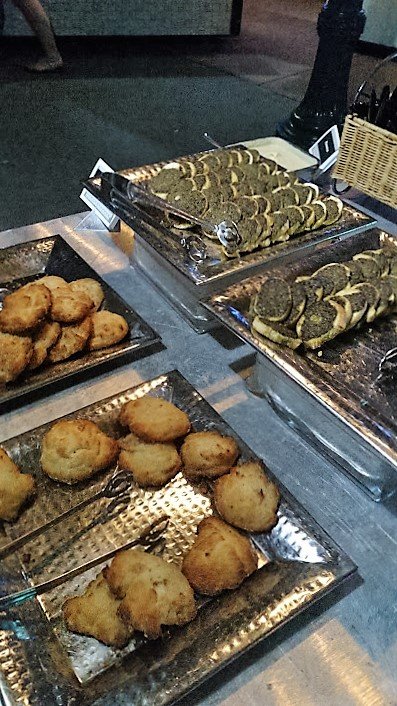 Now on to the drinks.  There were a variety of non-alcoholic beverages, including your standard bottled water, soda, coffee, and tea.  There were also some specialty juices.  But if you were 21 or older you also had access to the bar, where they served up 4 different Star Wars themed cocktails.  You could get as many as you wanted within the hour included with your entrance ticket.  The drinks included The Force (pomegranate lemonade with Jim Beam), First Order Finale (blood orange lemonade with coconut rum), Jakku Juicy cocktail (green apple lemonade with citrus vodka), and Corellian Smuggler’s Coffee (coffee with Bailey’s). 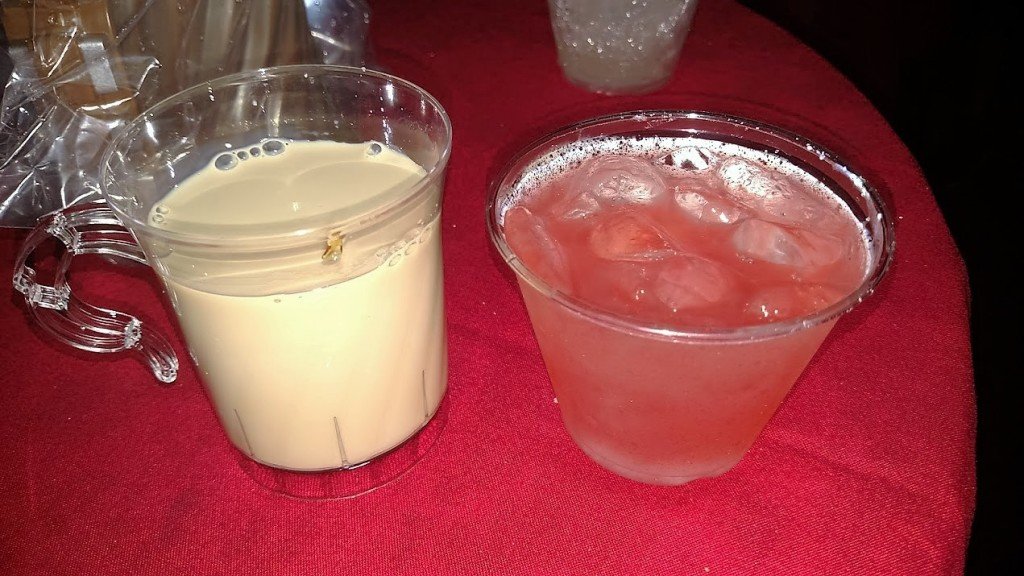 I will say that since they were included, they were rather small cups and were completely filled with ice before any of the mixed drink was added, so one serving probably didn’t include all that much alcohol.  That being said, I made sure to try them all.  And I tried them all multiple times.  I had the idea that I was going to “get my money’s worth” and I suppose I did!  They were all really tasty, though the First Order was my favorite – a nice fruity cocktail.  The bartender, I believe his name was Gabriel, was a lot of fun (and perhaps a bit too encouraging!).  Since I was there by myself I spent a little time talking with him and he was definitely the life of the party there!  He highly recommended the Force beverage and while I’m not normally a big Jim Beam drinker I had a couple – I will say that this drink was pretty strong.  I *may* have regretted consuming so much of the Force the following morning 😉 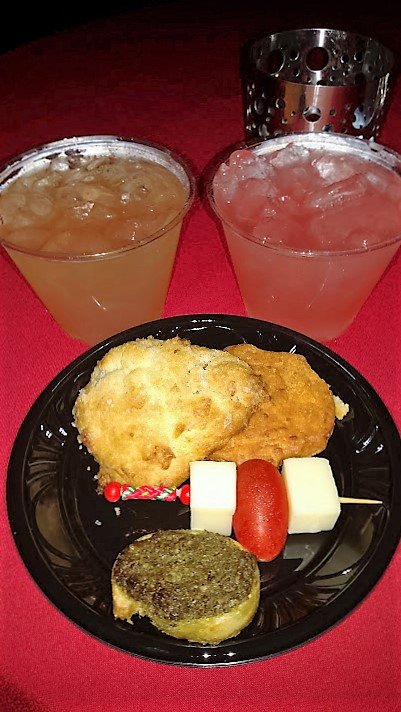 At 9:45 the fireworks show began.  I loved it.  I’m not the biggest Star Wars fan on the planet, but I enjoy it.  But there’s no denying that it has some incredible music.  And to have fireworks set to that music was just really fabulous.  I think I liked it better than Illuminations and almost as much as Wishes, which is saying a lot.  I can’t wait to see the new version.  Unfortunately I couldn’t get a lot of good photos – not sure if that was because of all the Jakku Juice or what!  But I didn’t want to focus on playing with my camera when I was seeing the show for the first time, so I just let it go.  Here are some mediocre fireworks pictures for your enjoyment: 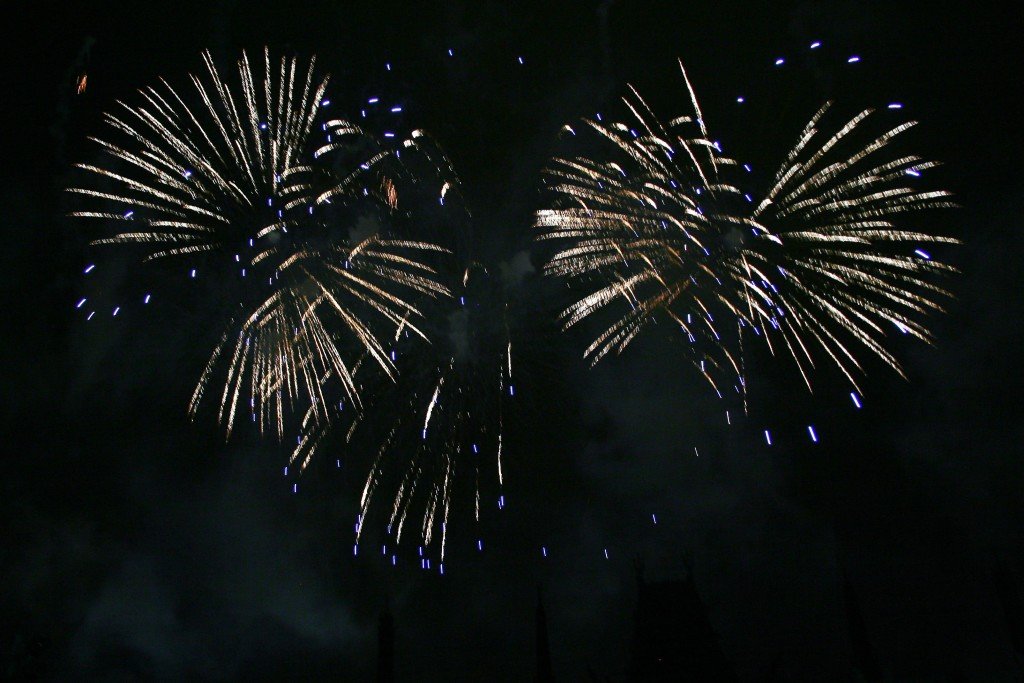 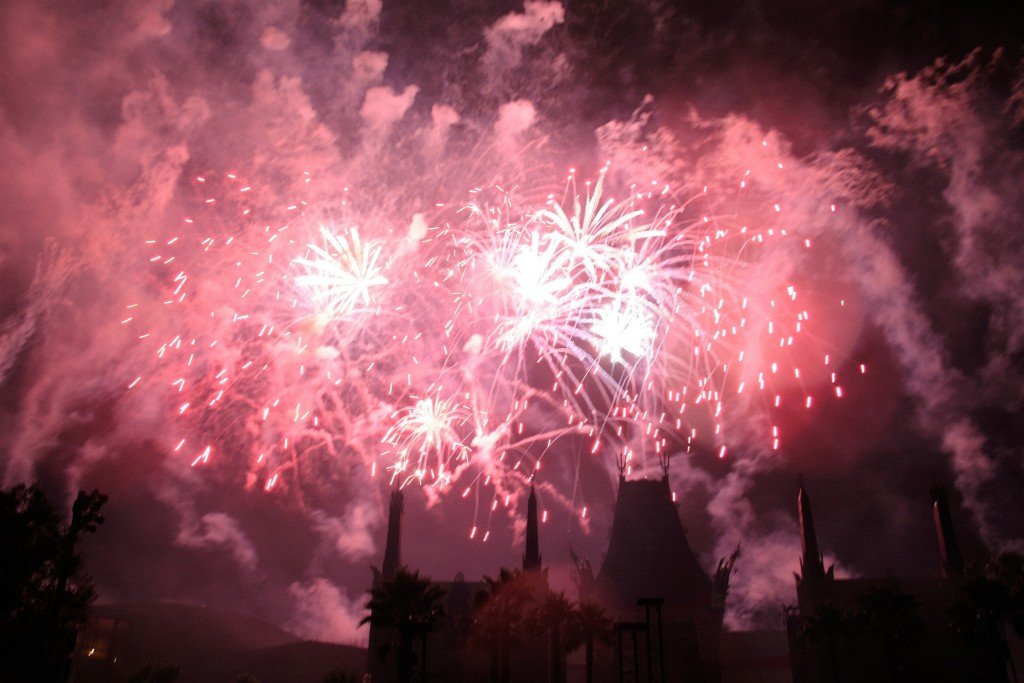 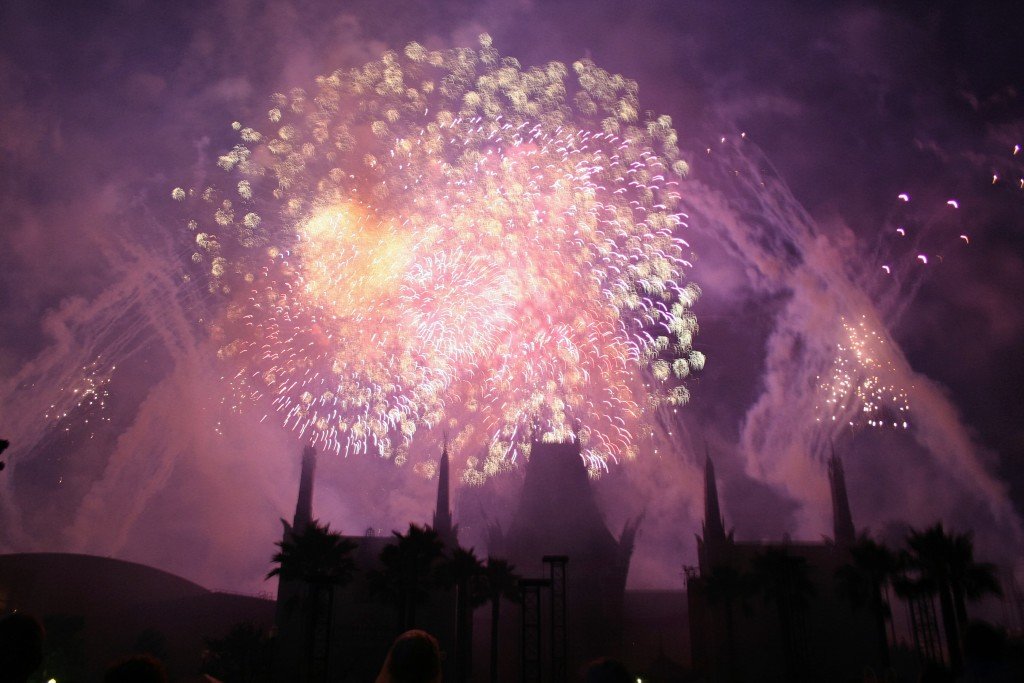 I know the question a lot of people like to ask is, “Is it worth it?”  And I will admit that $69 is a somewhat high price point.  But given what Disney is charging for other things, I did feel like personally for me, this was worth it.  If you’re going to drink alcohol I’d say it’s almost definitely worth it (let’s just say that if Disney normally charged $10 for a mixed drink I got more value for my ticket in the drinks alone).  There was a large food selection and I was stuffed by the end (and I didn’t even eat dinner beforehand to prepare!).  The fireworks view is wonderful.  And you also get the Chewbacca mug, so there’s a souvenir involved too.  I think if you’re looking to do something special and you or your family is a big fan of Star Wars, this is a worthwhile experience!