You are here: Home / Disney World / Princess Half Marathon 2016 recap 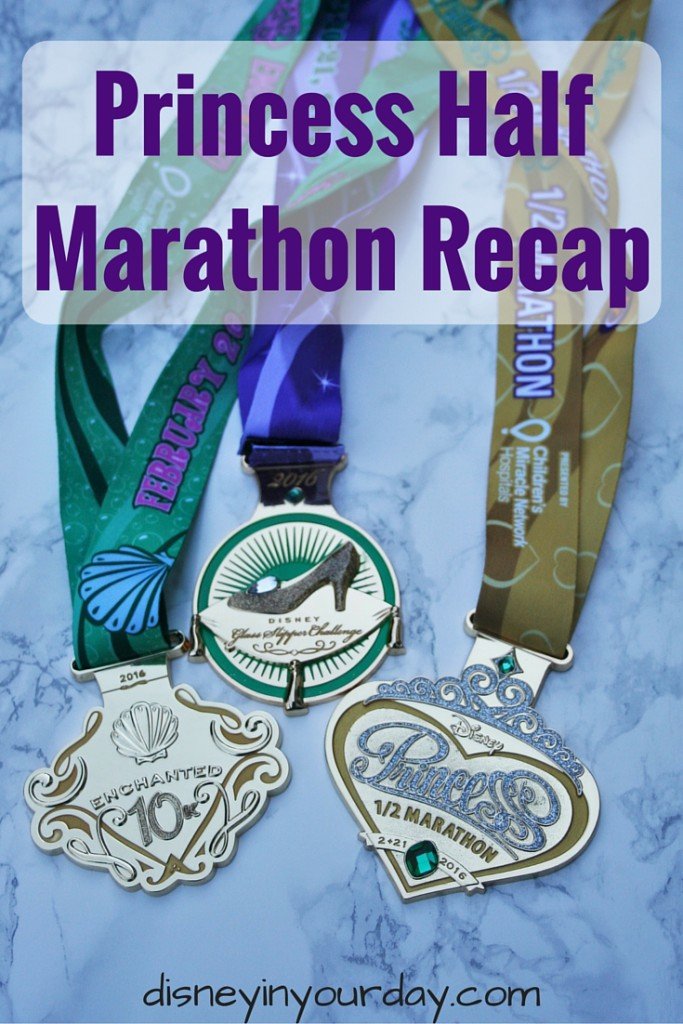 Maybe I’m crazy, but apparently I thought it would be a good idea to run a 10k on Saturday morning followed by a half marathon on Sunday morning.  It’s called the Glass Slipper Challenge, and you get a special Disney medal for completing it.  The races also require you to wake up at about 3 am, so it’s definitely a challenge in many ways.

This was my second year running the Princess half marathon, so I knew a little bit more about what to expect going into it.  What I didn’t expect, however, was that our bus driver would get lost on the way to the race start.  We were at All-Star Movies and boarded a bus supposed to take us to Epcot at 3:30am.  We rode along and saw the corrals set up.  Then we drove past them.  Were we taking some sort of back way?  But soon it definitely felt like we had gone too far, and the bus was pulling into the Ticket and Transportation Center at Magic Kingdom.  Without saying a word the bus driver got off to talk to a security guard.  There were no other race buses around.  He got back in and drove around to the other side of the TTC and dropped us all off, still not explaining anything.

Luckily the monorails were running due to the people staying in the hotels there going to the races.  A volunteer looked confused as she asked, “got dropped off in the wrong spot?”  At least we boarded a monorail and finally made our way to Epcot.  By the time we got to the bag check area it was past 4:30, having taken over an hour to get there – a marked difference from the previous morning, in which we got from All-Star Movies to the same exact spot in less than 15 minutes.  Needless to say, it was not the best way to start the morning so my anxiety was already high. 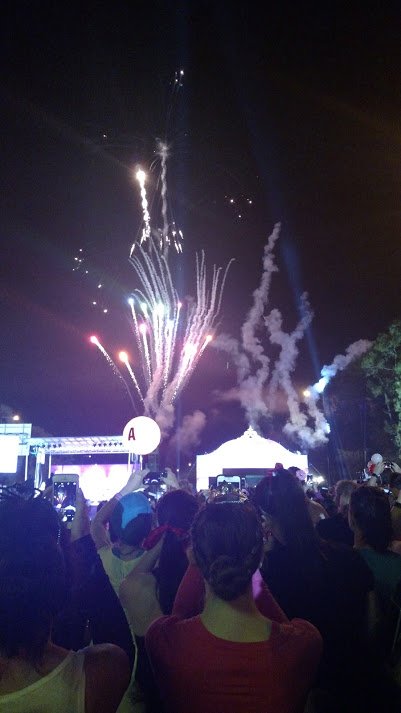 But I made my way to my corral, which was F this year.  We started running around 5:45.  It was a bit chilly at first but not as bad as last year, or as bad as the previous morning.  After about a mile I was comfortable.  I knew my pace would be slower than my other two most recent half marathons due to some ankle pain I was experiencing and the crowds that Princess weekend attracts.  So I tried my best to enjoy the 13.1 mile run!

At about mile 2 we passed the first character stop, which was the heroes – Phoebus, Prince Eric, Flynn Rider, and John Smith.  Some really rare ones but the line was quite long.  I kept going and crossed the gates into the Magic Kingdom area.  Along the way I also passed Jasmine and Abu and Jack Skellington and Sally.  Around mile 4 I ran through the Ticket and Transportation Center where I passed my husband, Jason, cheering me on!  As I ran onto Magic Kingdom he hopped on the monorail to get to Magic Kingdom himself, where he was again able to cheer for me as I passed by on Main Street. 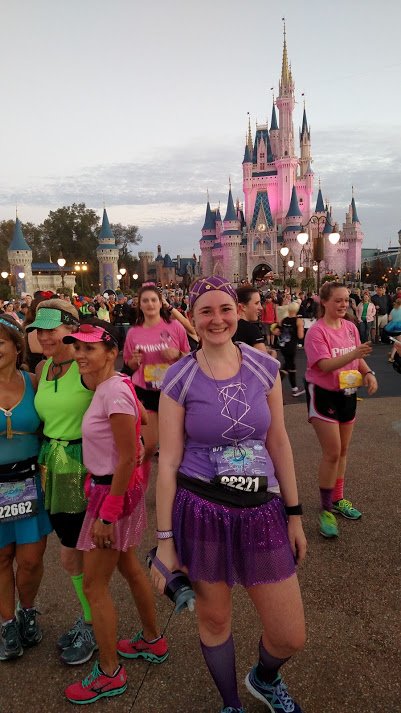 Seeing that castle and running through the Magic Kingdom is truly a magical moment.  Even though I’d done it before I still somehow felt myself tearing up a bit being there – thinking about what I was able to accomplish and doing it in my happiest place.  There were plenty of characters out here as well.  I passed Buzz Lightyear, the Queen of Hearts and White Rabbit, Lady Tremaine and the Stepsisters, and Woody.  Anna, Elsa, and Kristoff were also on top of the castle waving to us.  As we were leaving Magic Kingdom the train was out and I stopped for a quick picture with the conductor.  Just outside of Magic Kingdom they also had Belle and the Beast and Aurora and Prince Phillip.  I still continued on. 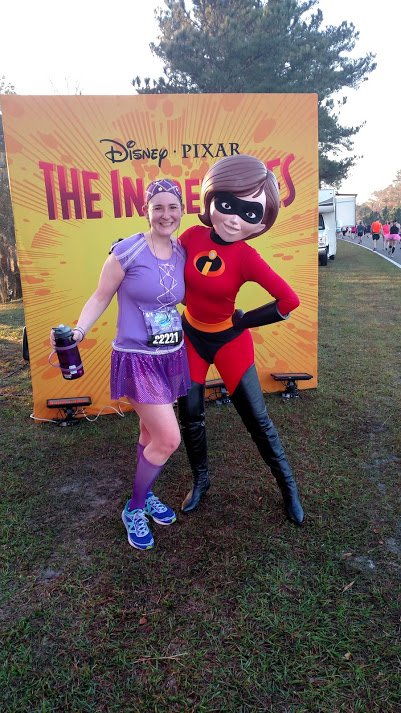 The next part is what many dread – the long run back to Epcot with nothing much to distract you, the dreaded miles 8-13 when you start to feel like you’re done, and a couple of hills.  Plus, it’s gotten late enough in the day that the sun is starting to rise and you’re getting hotter and sweatier.  I was glad to still see a good amount of characters out.  The genie (same one as yesterday) was there, and Bert with his Penguins.  Also a random bride and groom by the wedding pavilion.  After them I came to Mrs. Incredible, who had a short line.  I felt like I was doing a Disney race so I needed some character pictures, even if it slowed down my pace.  Who cared?  So I grabbed a pic with her! 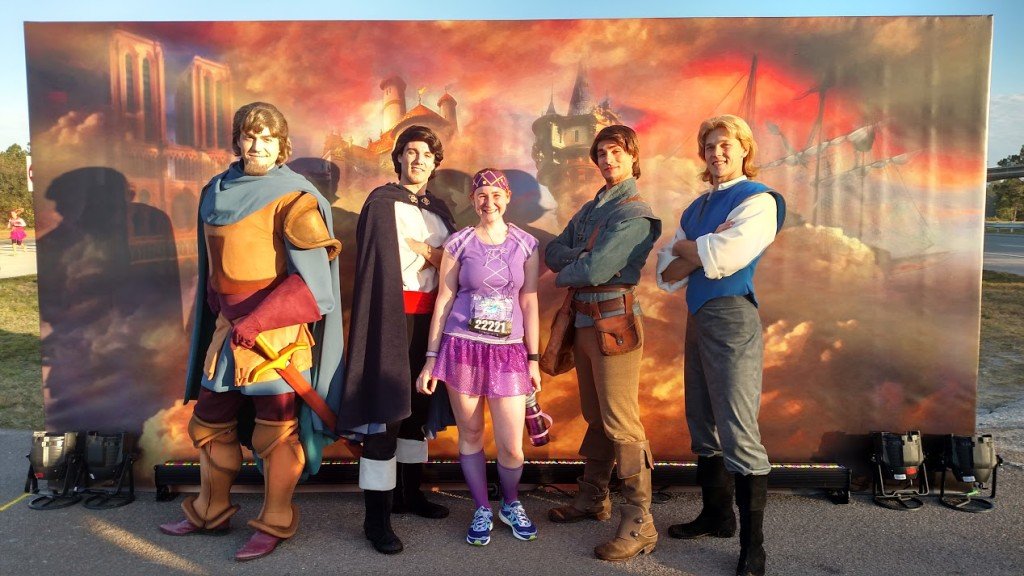 Continuing on we actually passed the heroes from the other direction, around mile 10, with a much shorter line.  Since I had my Rapunzel costume I wanted to meet Flynn and the rest of the rare characters, so I stopped!  It took about three or four minutes but totally worth it.  I know some people say that stopping makes them feel like they’ll never able to start again, but I enjoyed the little break and felt a little more energy when I started again.  Another weird thing that happened to me during this race is that I was totally craving sugars.  I usually stick to only water, but around mile 6 I started trying Powerade instead.  Not gonna lie, it tasted amazing and kept me going.  I alternated between Powerade and water after that. 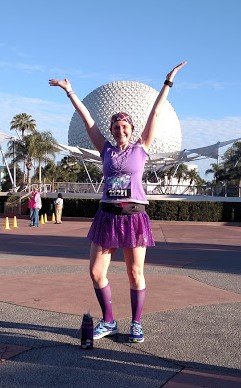 The green army men were there to whip us into shape and get us through mile 10.  They are pretty funny!  Up the two hills and back into Epcot, where there was a photo spot with the Major Domos and the carriage.  I got into Epcot and stopped for a quick picture in front of Spaceship Earth.  And then, finally, I was at the finish line!  I met up with Jason and my brother-in-law’s girlfriend, who had finished a good half hour before me.  She got a massage and I got a glass of champagne, and we both had our shiny medals! 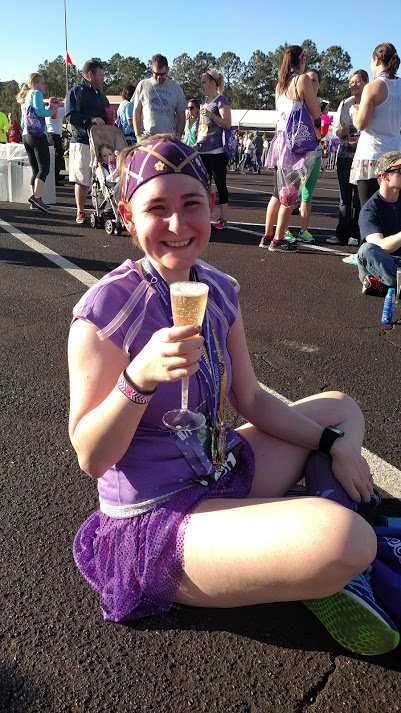 All told I finished the half marathon in about 2 hours and 37 minutes, with a pace of 12:03 minutes per mile.  Not my best half time but much improved over the Princess half last year – and last year I didn’t really stop for any characters!  I’m improving overall, I feel good, and I had a fun time, which is what really matters!  Odds are I’ll be back for the Princess half again next year… unless I decide to do the full marathon in January instead…