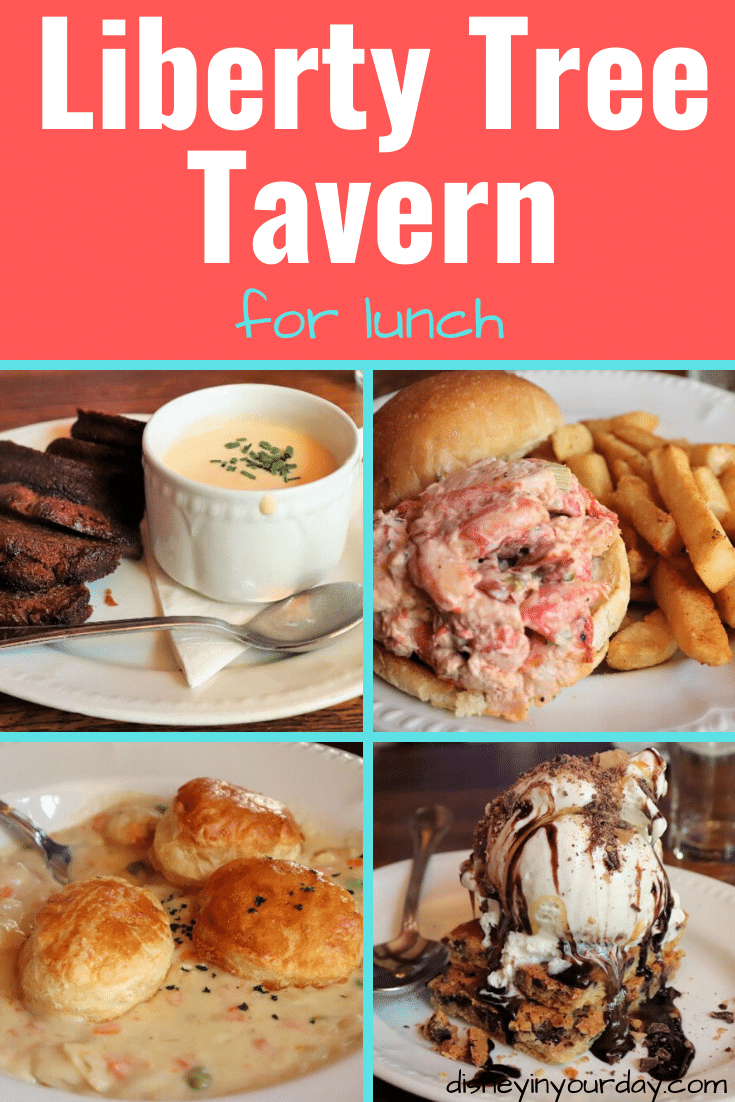 On a past trip we got around to trying lunch at Liberty Tree Tavern! We’d done the dinner here once before, which is a fun family style meal with food similar to Thanksgiving dinner. My parents are really into colonial style places lately, so I knew it would be a good place to take them. But we traveled the week after Thanksgiving so we didn’t need another big turkey dinner! Lunch seemed like the perfect thing to try. 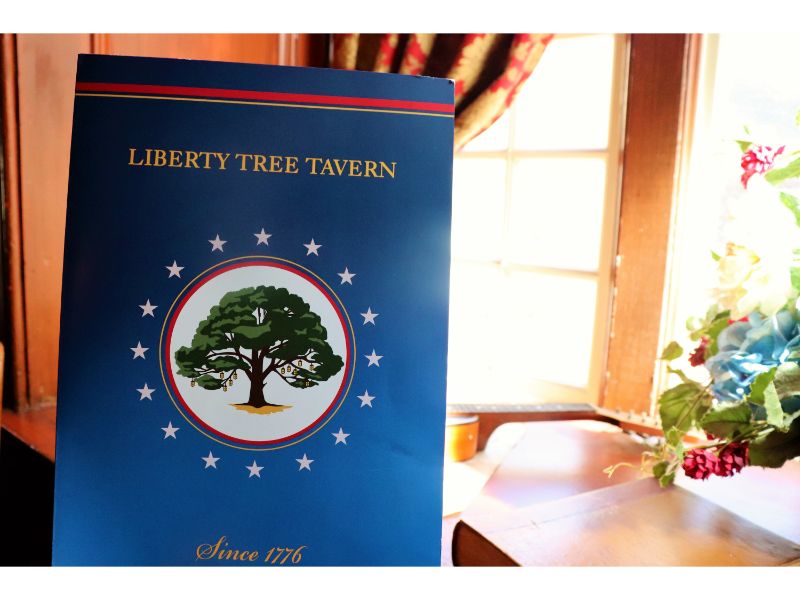 The atmosphere is really cool, with lots of colonial decor. There are tons of smaller rooms all over the place so it doesn’t feel like one big dining hall. We were in a corner next to a window that was decorated with a lute, sheet music, and books. There are also paintings up of famous people from this time in history, like a portrait of Benjamin Franklin.

The menu for lunch sounded really delicious, and there were a lot of options I would have been interested in trying. We all started with a beer, as they have a few typical “American” beers on draft or in bottles, such as Sam Adams.

We also decided to share an appetizer, the Tavern Cheese Dip (Blend of Four Cheeses with Griddled Boston Brown Bread): 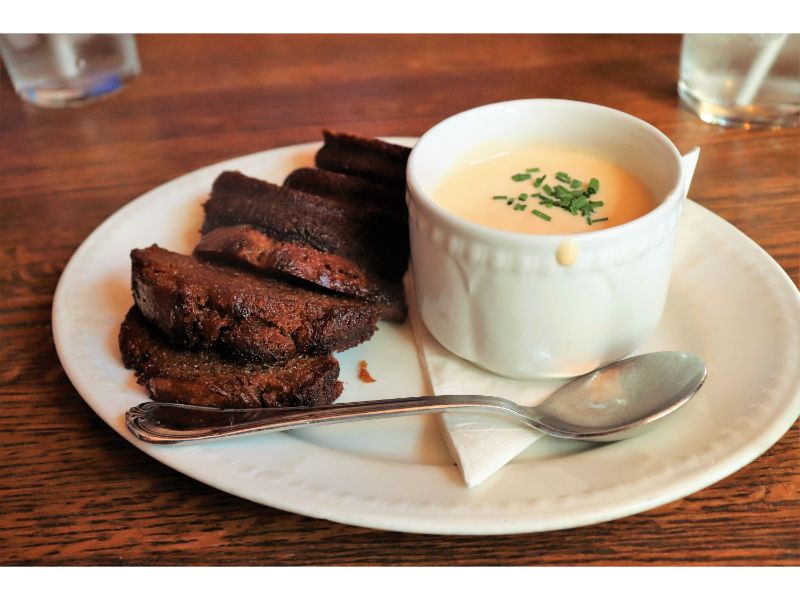 This was absolutely delicious. It was pretty rich, so a good thing to share with 4 people. There was also great bread with it. I wish they’d given us a little more of the bread, since there was a generous amount of cheese. We still did good work on it though.

For her entree my mom got the Tavern Battered Fish and Chips (House-made Tartar Sauce and Tavern Fries): 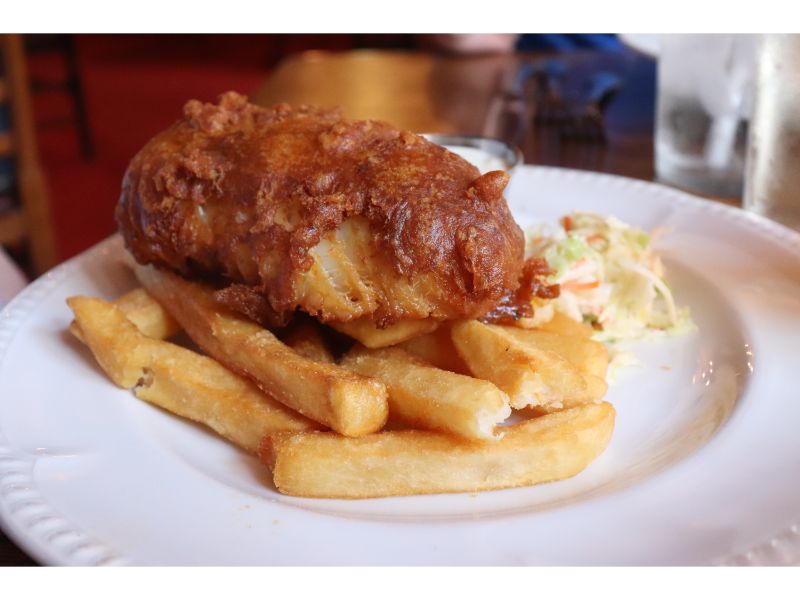 This was one huge piece of fish! The outside was very crispy. I think the batter was excellent but it could be a little too much for some people. The fries it comes with were thick cut and there were a ton of them. This was a huge portion of food.

My dad and Jason both went with the Turkey Pot Pie (Tender Roasted Turkey, Carrots, Potatoes, Peas, and Puffed Pastry): 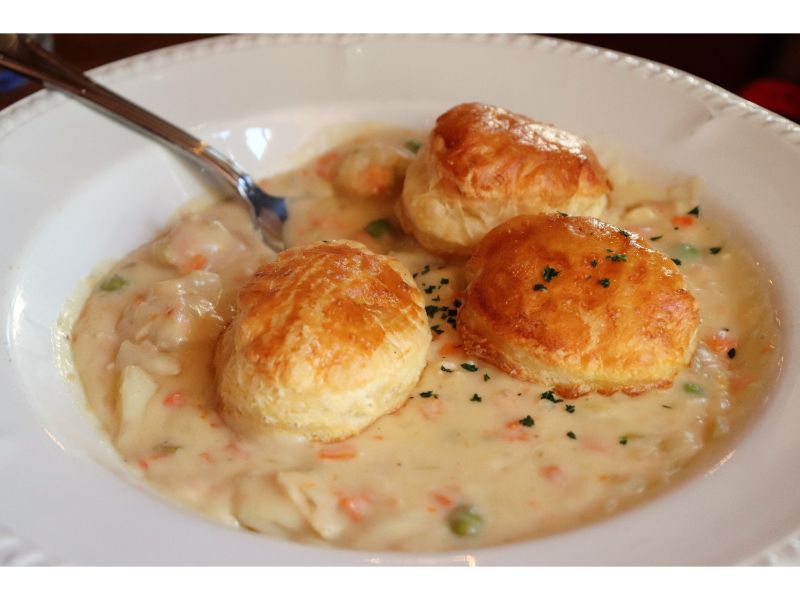 I tried a bite of this and had to steal a couple more bites because I enjoyed it so much. I almost wish I’d ordered this too, though my entree was excellent. It’s not a typical “pie” in that it’s not a full crust, but kind of like a very thick soup with biscuits on top. I personally like this better because otherwise the crust can kind of take over. It was extremely buttery and delicious.

I myself went with the Lobster Roll (Creamy Lobster Salad, Fried Clams, and Lemon-Caper Aïoli): 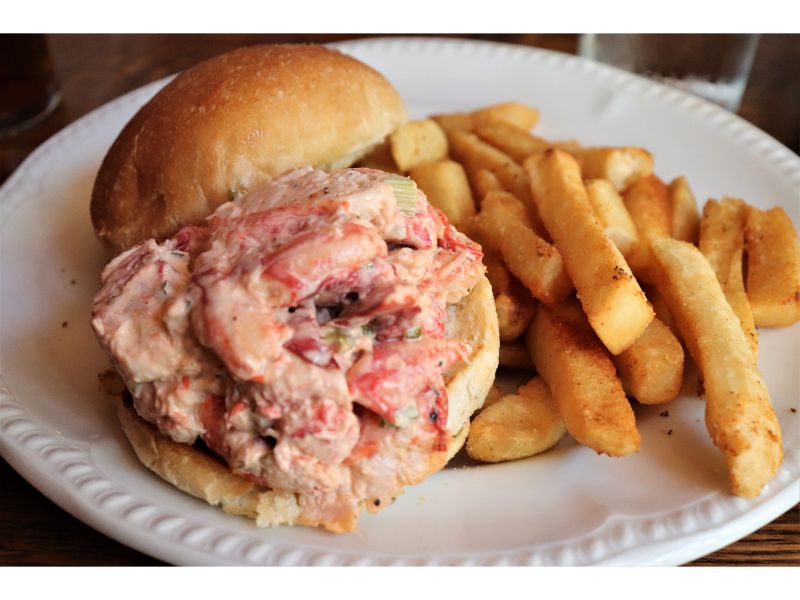 This wasn’t served on a typical long roll but more of a round style roll. It didn’t really matter at all but I was just a little surprised. There was, however, a TON of lobster. The lobster salad itself was pretty light and very pleasant – I actually ended up eating some of it without the bun because the bread was overpowering at times. It also came with a massive amount of french fries.

Even though we were pretty stuffed our server still managed to somehow talk us into dessert – because we had to try the famous Ooey Gooey Toffee cake! 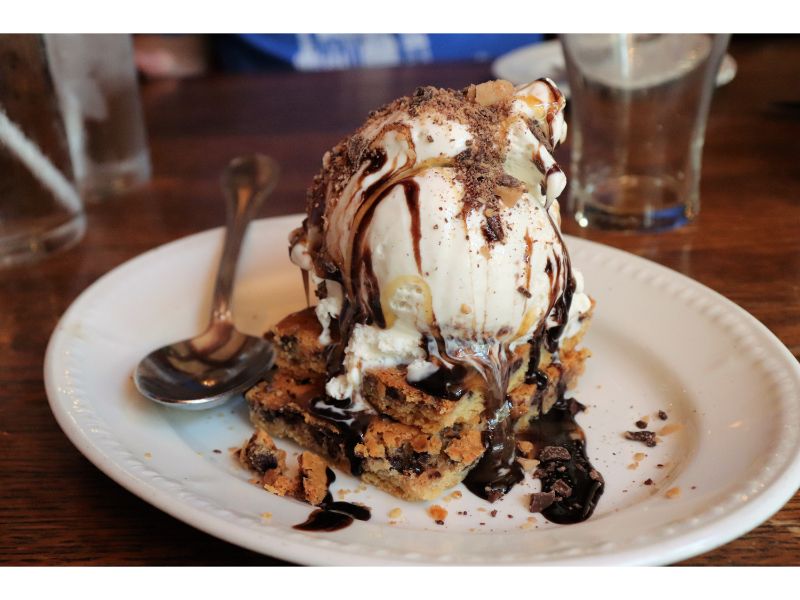 We split one and that was plenty. The cake itself is good but it pairs so well with the vanilla ice cream and the chocolate and caramel sauces. Definitely worth sharing one if you’re eating here.

Overall I was really impressed with the lunch we had here. Everything was really good and something I would consider ordering again. It beats a lot of the other table service meals we’ve had in Magic Kingdom. I think I prefer the lunch over dinner here because I’m not as into the meat, potatoes, vegetables, etc. sort of dinner. But I lobster roll or pot pie? I’m in! I would recommend it for a great sit-down lunch and good way to get out of the heat for a little while.

Have you had lunch at Liberty Tree Tavern? What item on the menu looks best to you?