You are here: Home / At Home / Jazz Loves Disney album 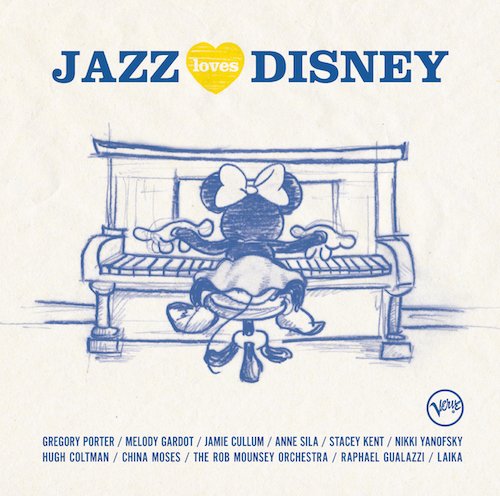 This is a sponsored post from Disney Music and One2One Network. All opinions are my own.

Fun fact that you may not know about me: I really enjoy jazz music and when I was in high school I participated in both jazz choir and jazz band.  Now, the choir part may not be all that surprising, as many of you know I sing and do musical theater.  But I actually also played trombone in high school and playing jazz music was much more fun than most of the “regular” band music!  So when I heard about this new jazz album of Disney songs I knew it would be something I would enjoy.

Not only do I like jazz music, but of course I love Disney songs.  I literally grew up singing them – I remember deciding that my family would all be involved in our own production of the Lion King and we’d act it out in my living room, complete with musical numbers.  I’m not sure that ever actually happened, but I wrote a script out and everything (I’d pretty much memorized the movie so it wasn’t too hard!).  My family is kind of awesome for putting up with that and the nonstop playing of Disney music around the house!

Of course, Jazz Loves Disney focuses on a lot of the older classics that lend themselves well to jazz, but it has a few modern takes too (including a jazzed up version of Let it Go from Frozen!).  Here’s a look at hte track list:

1.  Jamie Cullum – “Everybody Wants To Be A Cat” – from The Aristocats
This, of course, is basically the perfect song for this album.  It’s already a jazz song and I really enjoy this cover of it.  It has a slower jazz style in the beginning but then steps it up into a totally swingin’ jam.

2.  Melody Gardot – “He’s A Tramp” – from Lady And The Tramp
When I feel like singing, this is one of my favorite Disney songs to play.  While I don’t really think anyone could live up to the original Peggy Lee version, this is also a good one and I like the fact that it’s longer too.

3.  Stacey Kent – “Bibbidi Bobbodo Boo” (French version) – from Cinderella
This is definitely one of those elevator music type jazz songs.  It’s nice to have on in the background and I like that it’s in French as something a little different.

4.  Gregory Porter – “When You Wish Upon A Star” – from Pinocchio
I like Gregory Porter’s take on this song, but I’m not crazy about the arrangement itself.  Still, it’s a nice addition to the collection.

6.  Raphaël Gualazzi – “I Wanna Be Like You” – from The Jungle Book
I have a couple of versions of this song that I really like (including the original and the Fall Out Boy version from the We Love Disney album) and this is yet another take that I really enjoy to add to the collection!

8.  Hugh Coltman – “You’ve Got A Friend In Me” – from Toy Story
I feel like this is a really iconic song to put a new spin on, but I am definitely jamming to this version.  A solid contribution!

9.  Anne Sila – “Let It Go” – from Frozen
This is one of the more unique songs on the album, in that the original song was really not a jazz song at all, so this version feels very different.  I love new takes on something and I think this is a pretty cool version and Anne Sila does a good job on it.

10.  Melody Gardot & Raphaël Gualazzi – “The Bare Necessities” – from The Jungle Book
I really like this song as a duet!  There’s a lot of fun stuff going on in this version of the song.

11.  Laika – “Once Upon A Dream” – from Sleeping Beauty
This jazzy version of Once Upon a Dream is even slower than the original, and while I don’t think I would play this one often it would make a good lullaby.

12.  Nikki Yanofsky -“Someday My Prince Will Come” – from Snow White & The Seven Dwarfs
This version is in French and is a beautiful rendition of the song.

13. The Hot Sardines – I Wanna Be Like You (French & English version) – from The Jungle Book (US release only)
It’s interesting that they chose to put this same song on the album twice, even if it is two different artists covering it.  I prefer the earlier one but this is a decent take on it as well.

Overall I think this album is a great addition to any Disney fan’s collection who also enjoys jazz music (or a jazz fan who doesn’t mind a little Disney!).  My favorites on the album were probably Everybody Wants to be a Cat and You’ve Got a Friend in Me.  Both are fun versions with good vocals and great instruments!  If you’re looking to add it to your collection, you can find Jazz Loves Disney for sale on iTunes and on Amazon.

Which Disney song do you think is the best choice for a jazz cover?