You are here: Home / Disney World / How to make a Megara running costume 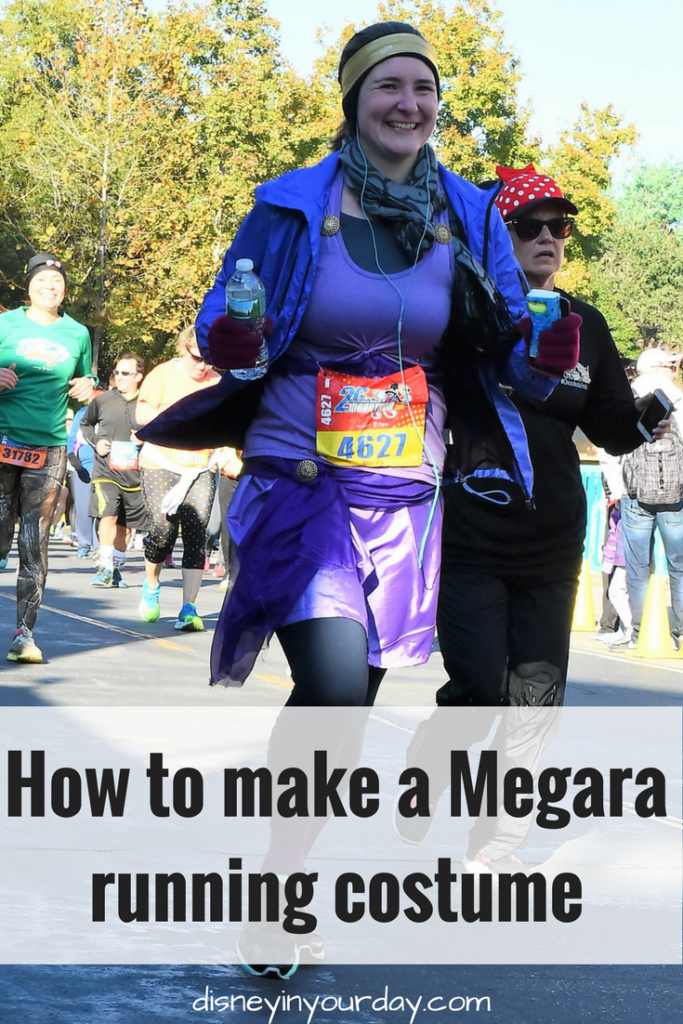 Choosing a running costume for the Disney World marathon required a lot of thought and debate for me.  This was big – the marathon! – so I wanted to pick a character I really liked.  Running the marathon also represented strength and courage, so I wanted to pick a Disney character who also represented those things.  I was looking for a strong female character, and after thinking about a few options I decided on Megara from Hercules. 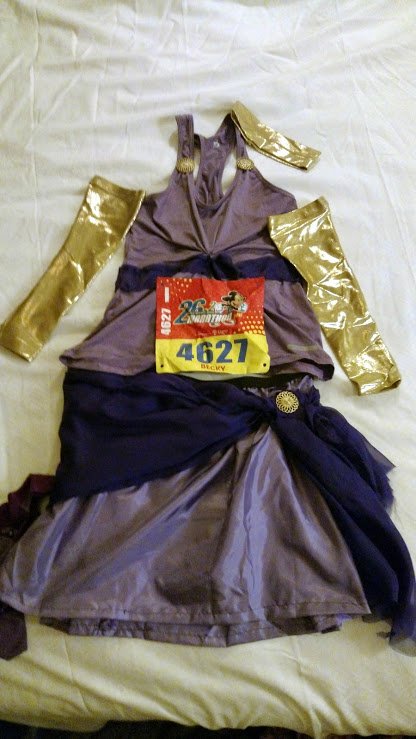 I love Meg because she’s different than a lot of the princesses (though I love them too!).  Unlike many of the innocent, naive ladies in other films, Meg has seen the worst of life.  She’s witty and doesn’t need a man – “I’m a damsel, I’m in distress, I can handle this.”  And although many people apparently don’t want to see their strong female leads in relationships, I like the fact that she falls in love with Hercules because they are good for each other, and she is able to embrace a side of her that she’s been hiding.  She’s strong in every sense of the word, and that’s what I wanted to be for the marathon.

This is the first time that I actually made a good bit of my costume myself – like, actual sewing and stuff!  And it came out pretty well, considering my very limited skills.  The biggest downside was the fact that much of my costume was hidden or covered during the actual marathon, because it ended up being about 40 degree that day!  Extra layers were sadly necessary.  But let’s take a look at what I did: 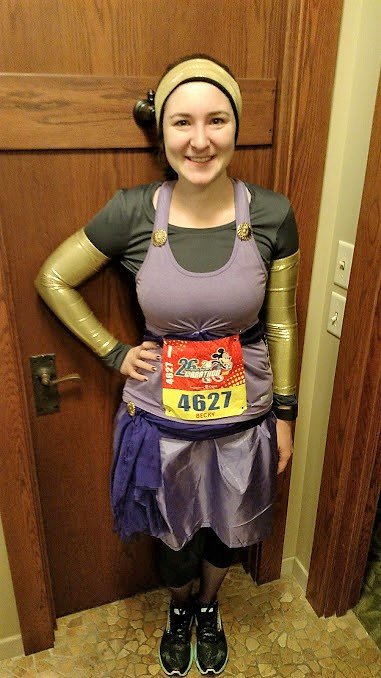 I feel like you can always tell when it’s one of those 3am photos from the look in my eyes.

I bought a basic purple athletic tank top from Amazon to work with as the base to my top (you can find the exact one that I used here).  I then went to Jo-Ann’s and purchased some dark purple fabric and large gold buttons.  I sewed the dark purple around the middle and the uttons onto the straps of the tank top. 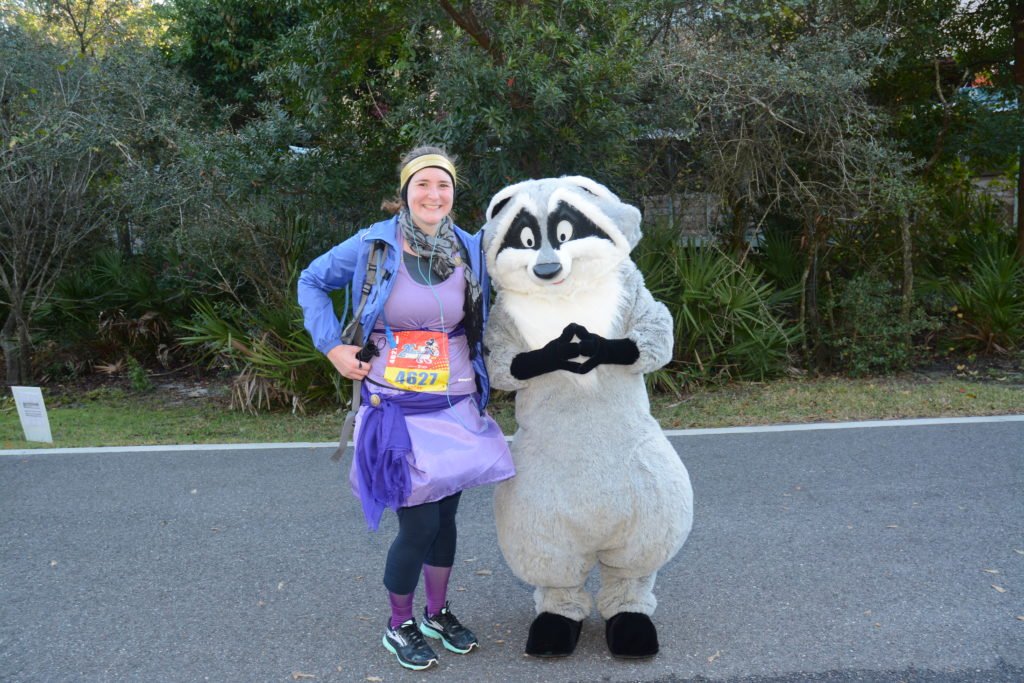 As you can tell from my skirt, not only was it cold but also windy that day!

I actually made the skirt from scratch, and while it is certainly not a work of art if you looked closely at the stitching it got the job done.  I picked out a purple fabric that matched the tank top I had as best I could and got some elastic for the waist.  I used this YouTube video for the tutorial.  For the sash I used the same fabric that I had used on the top.  I actually just tied it around my waist and then hand sewed some stitches to secure it to the skirt and added the gold button.

I always wear a headband when I run, and for this race I also wanted arm sleeves in case it was cold (it was colder than just arm sleeve weather!).  I decided to get gold for both of these to accent the costume and so it wasn’t quite so monochromatic.  I got this headband from Amazon and gold arm sleeves from Sparkle Athletic.  On race morning I ended up wearing a heftier headband with ear warmers underneath the headband, as well as underarmour under the arm sleeves and a jacket on top. 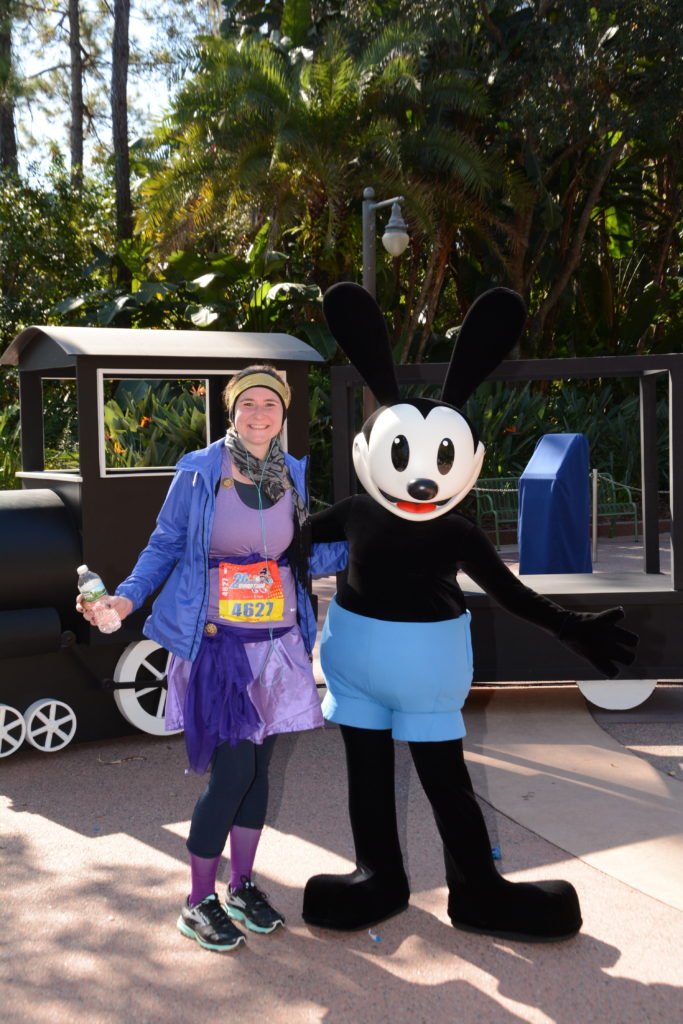 What do you think of my Megara costume?  Which costumes would you like to see in the future?