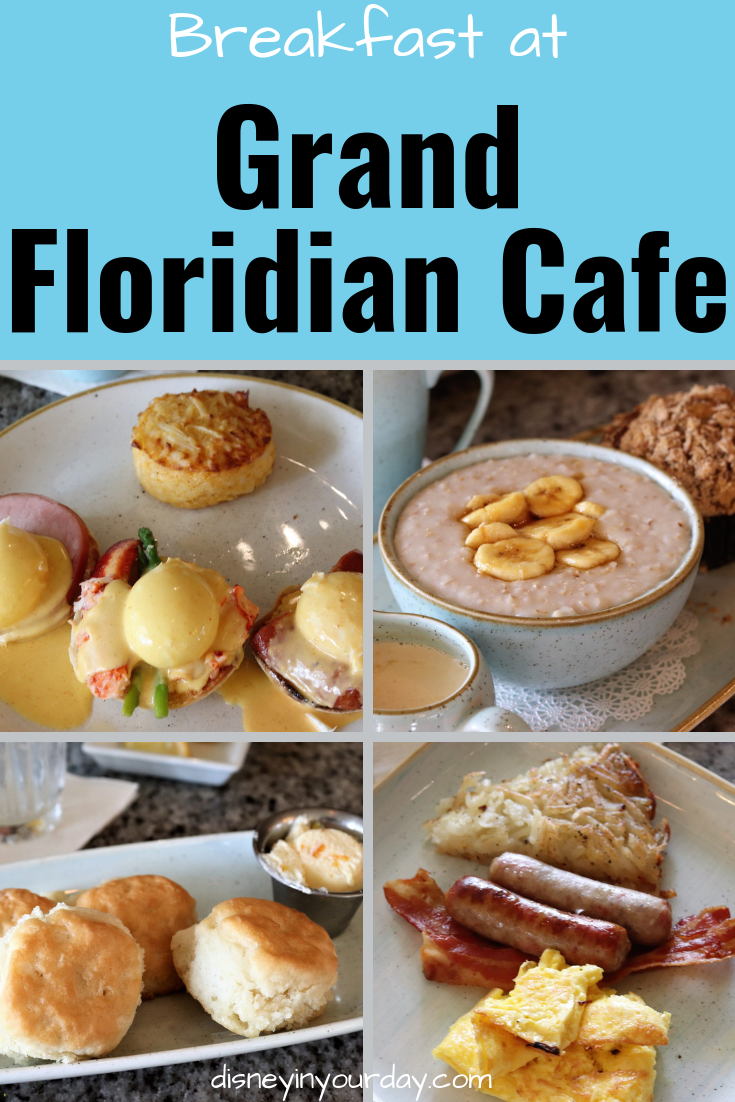 I’ve eaten dinner at the Grand Floridian Cafe before, but this was the first time I got to experience breakfast. Located in the Grand Floridian resort, this is an easy trip from Magic Kingdom. In our case we started our day with breakfast here before hopping on the monorail to go to the parks.

The atmosphere here is Victorian and elegant, but more casual and laid-back than some of the other locations at the Grand Floridian. We had very good service and some delicious food. There were a few highlights from this meal and I would definitely recommend it for breakfast!

To begin with we ordered coffee and water. It was just the standard coffee they serve there (not the pressed pot) but it was excellent. After we ordered food we were brought a plate of biscuits to begin with. 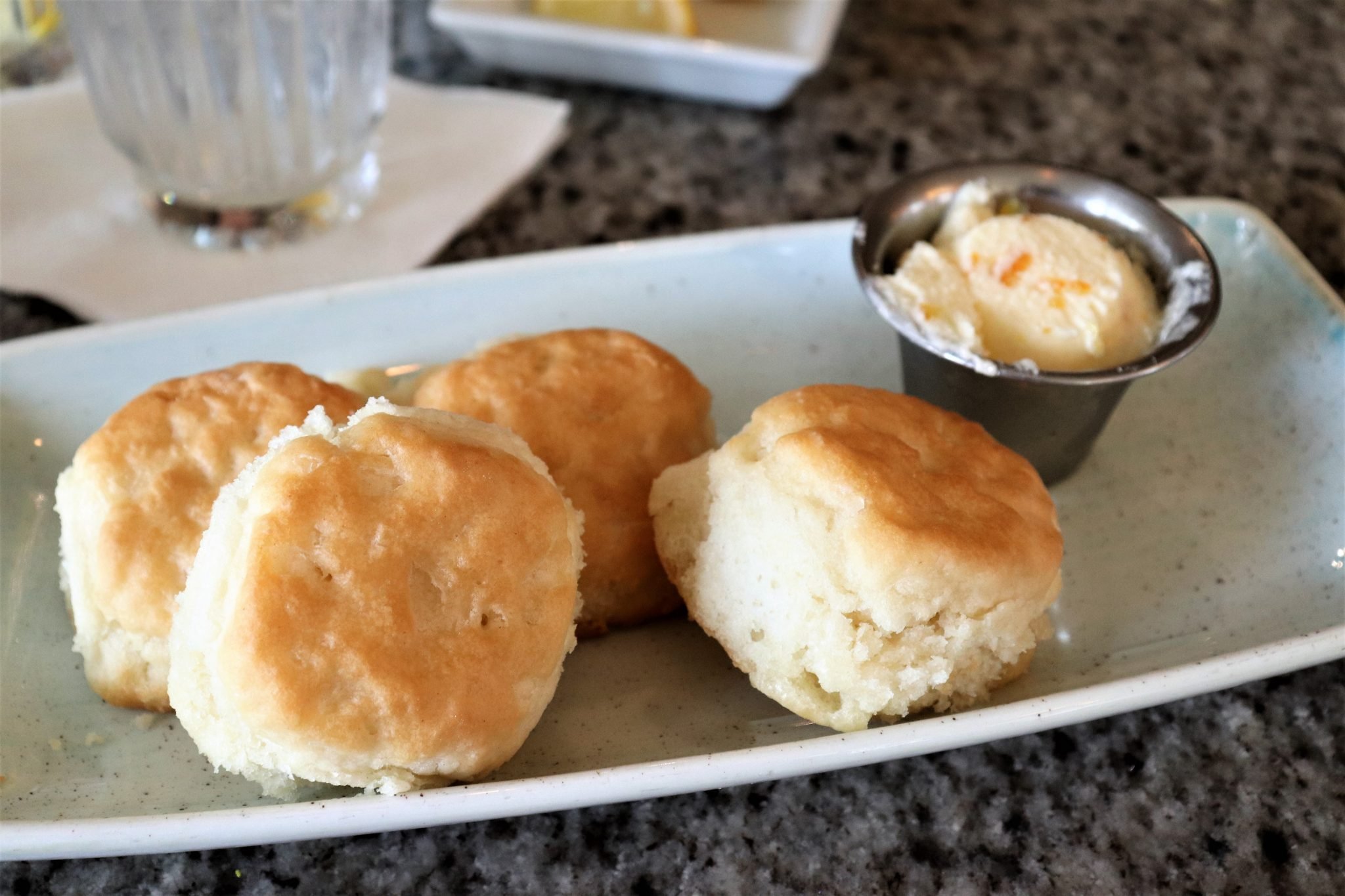 The biscuits were good, if somewhat standard – but it was the butter they were served with which was incredible. It was a citrus Chantilly butter and it was so flavorful and delicious. A great orange flavor that went so well on the biscuits.

My friend ordered the Bananas Foster Oatmeal (Served with a Freshly Baked Banana Bead Muffin). It’s available as an appetizer but she had it served with her meal.

I stole a bite of this and it was amazing. Probably the best oatmeal I’ve ever eaten. It had a great banana fosters flavor and was quite rich for oatmeal. It was also served with a banana nut muffin (she kept this in a bag for a snack later). With the muffin and big bowl of oatmeal I could easily order this as my full breakfast and be satisfied.

For her meal she went with the Grand Breakfast (Two Eggs served with Bacon, Sausage, and Cheesy-Hash Brown Casserole): 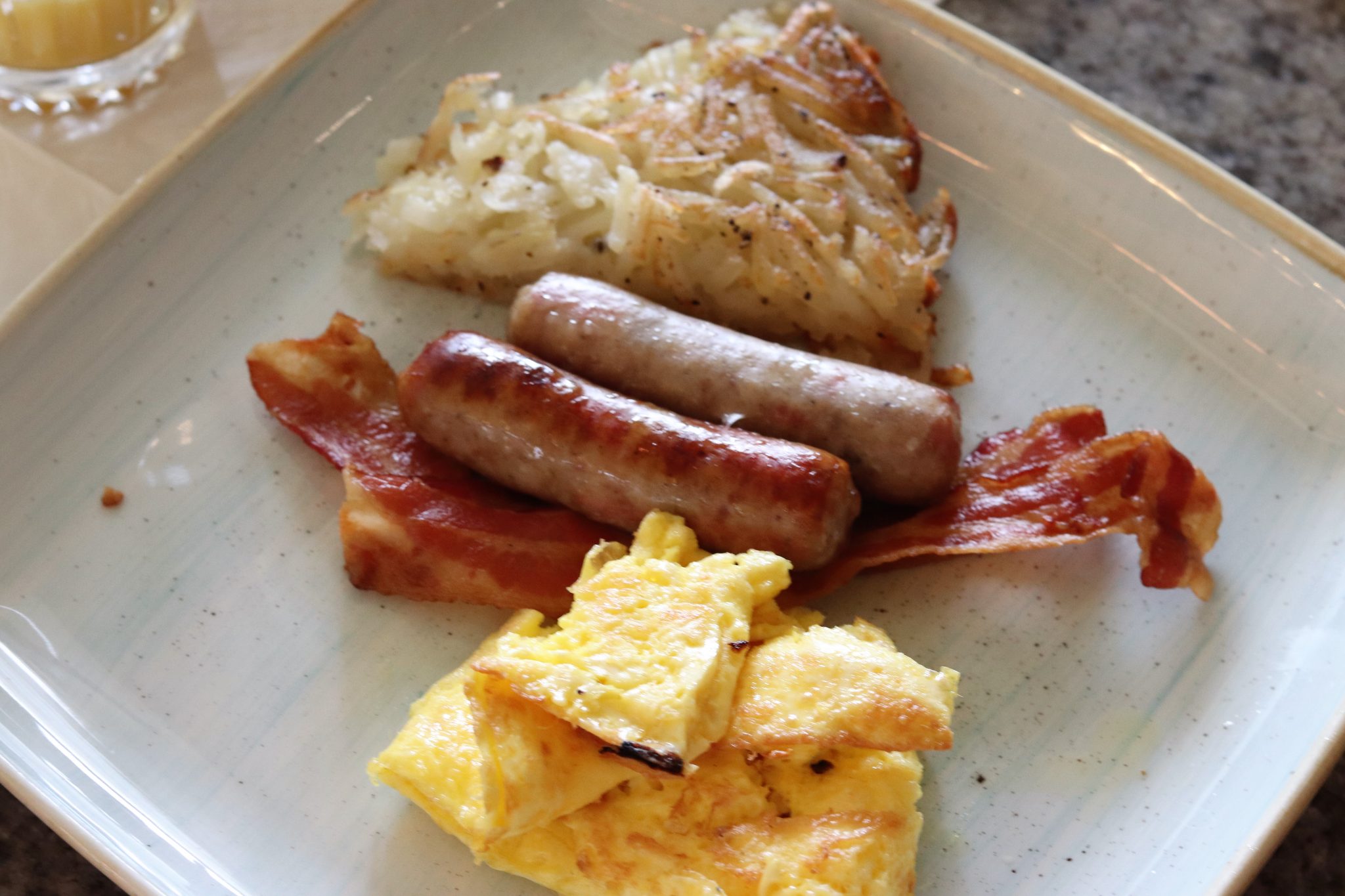 This is your most standard breakfast option if you’re just looking for the typical bacon and eggs sort of deal. But it’s good and filling. It’s normally served with a cheesy potato casserole but my friend asked for just regular potatoes because she doesn’t care for the cheesy version. They were able to do some typical hash browns that she really enjoyed.

For my meal there was no question what I was getting: the Benedict Flight (A tasting of Grand Floridian Cafes’ Three-signature Benedicts served with Marinated Tomato Salad). 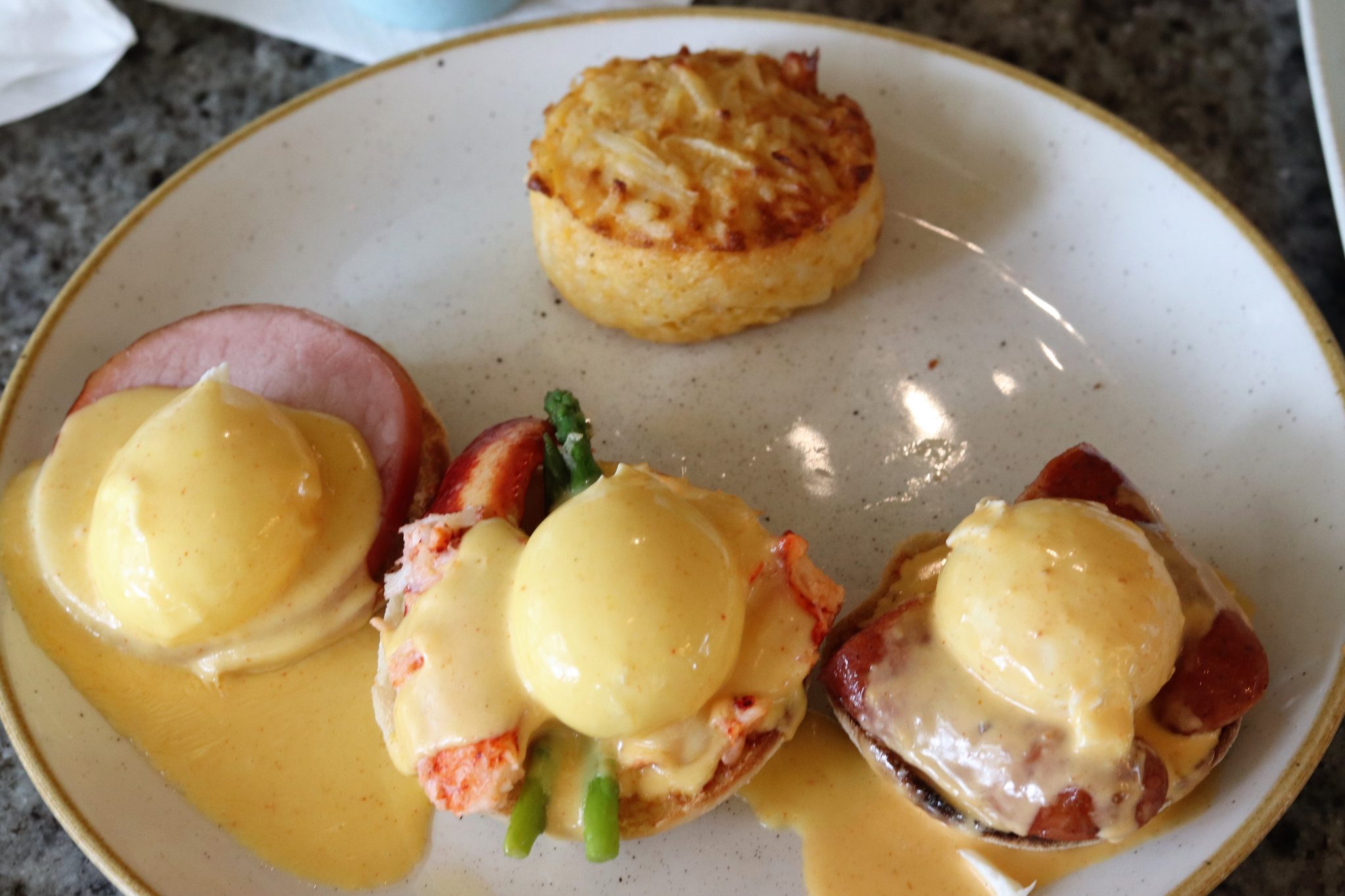 I once had a bad eggs benedict experience (not at Disney, at a local place – think eggs that were basically hard boiled and hollandaise sauce which was a bit congealed), so I can be a little hesitant about ordering them. No regrets here as this trio was fantastic. The lobster was far and away my favorite.  As far as I could tell the hollandaise sauce on all of them was the same (even though it said there was a different one on the chorizo), and it was rich, buttery, and so good. The lobster was very generous which some big chunks. The traditional one was very good as well, though it was the hollandaise that really stood out there. And while I enjoyed the chorizo, it didn’t taste much like authentic chorizo to me. There wasn’t quite enough spice and flavor, though it was still tasty.

The benedict is typically served with a tomato salad, but he asked if I wanted something else instead. After hearing about the cheesy potatoes I went with that. They were quite good and if I wasn’t so full I would have eaten more of them! 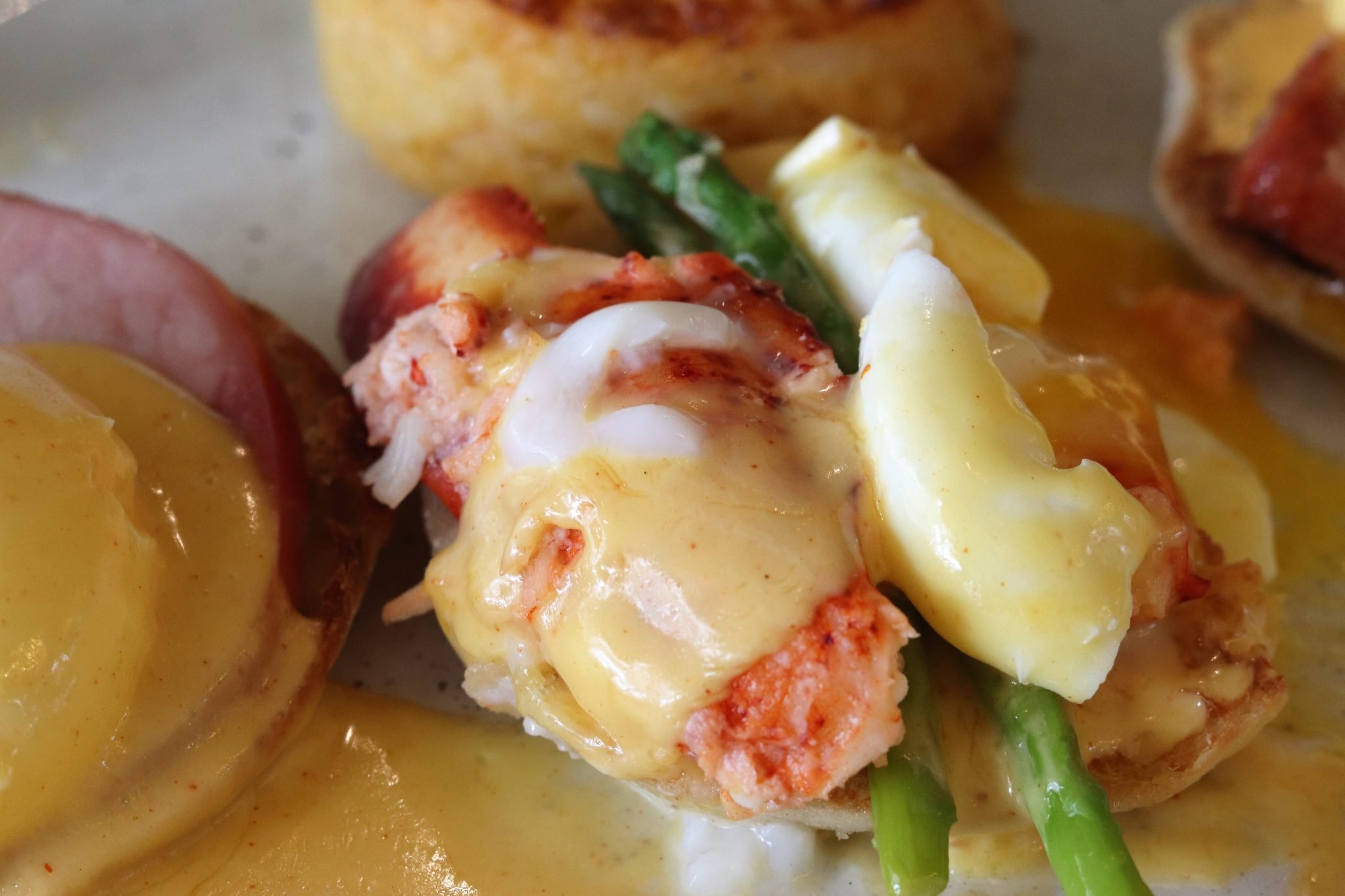 Lots of big pieces of lobster!

Have you been to the Grand Floridian Cafe breakfast? What would you most like to try?