You are here: Home / Disney Movies and TV / Frozen the Musical on Broadway 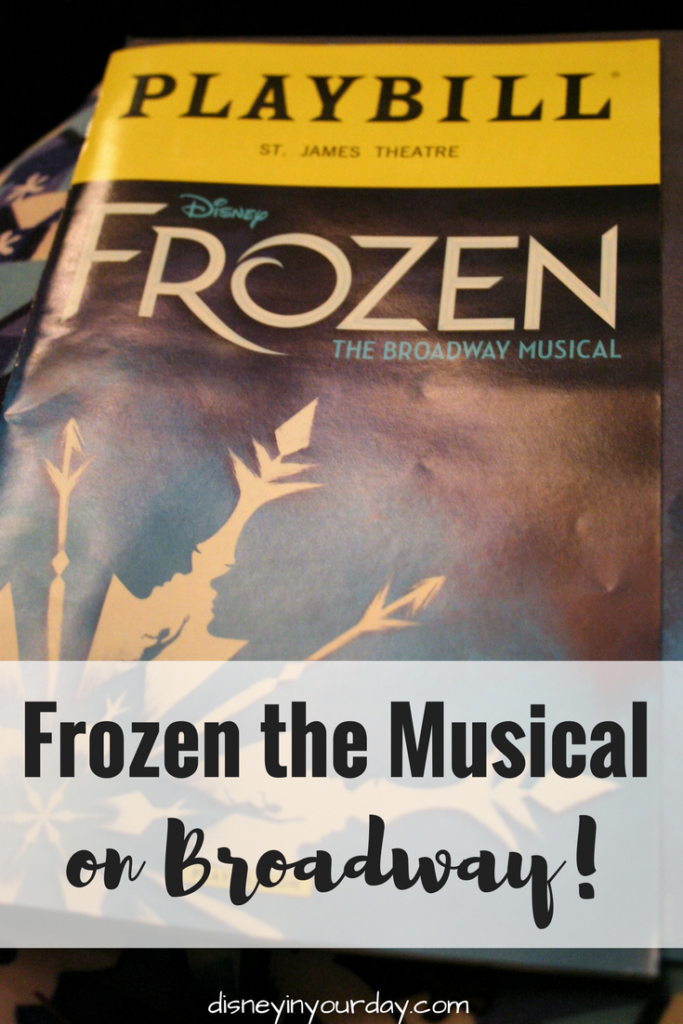 When tickets for Frozen the Musical first went on sale, I decided to jump on them right away.  Well, when I get an email about something like that I almost always just look to see what the prices are and if it would be an impossible thing to do.  And low and behold, after checking a number of dates I found a Tuesday night where tickets were about $75 for the mezzanine – still pricey but definitely reasonable! I knew this one could get big and tickets might be hard to come by later, so I checked with Jason and we went for it. The show was also two days before my birthday so it worked out as a nice way to celebrate too. 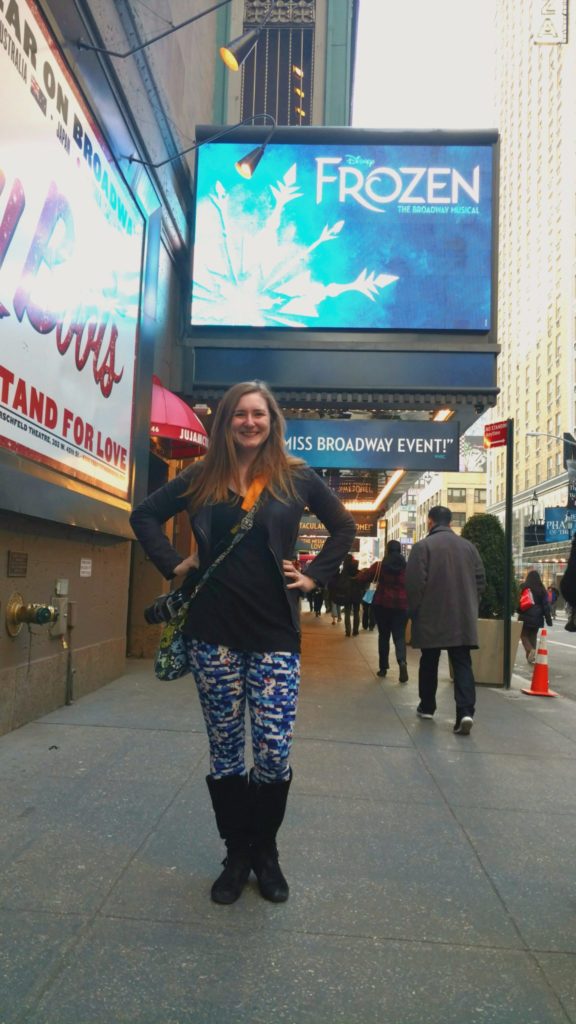 We took half days from work and traveled into NYC, with time to explore some of the shops in Times Square and have dinner at Sardi’s.  At 7:30 we were at the St. James theater and ran into another of my Castle Dreams travel agents who happened to be there the same night! Small world.  Then we headed to our seats, which were row J in the mezzanine. We still had a very good view. 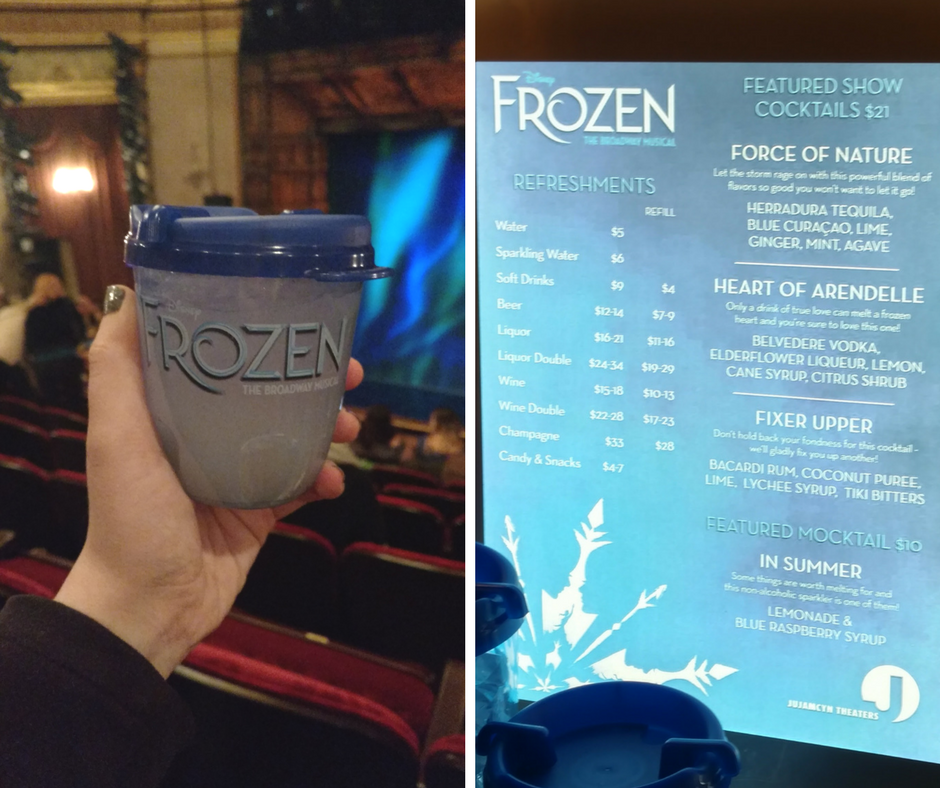 Everything in NYC was overpriced, of course, and the snacks, drinks, and souvenirs in the Broadway theaters are no exception. The bar has wine and beer, and they also have specialty cocktails themed to the musical! I thought that was really fun.  All drinks are served in souvenir Frozen cups with a lid so you can bring them back to your seat and enjoy them during the show.  I enjoyed the “Fixer Upper,” and I will say that at least for the price, they made it quite strong and I got the cup to take home! 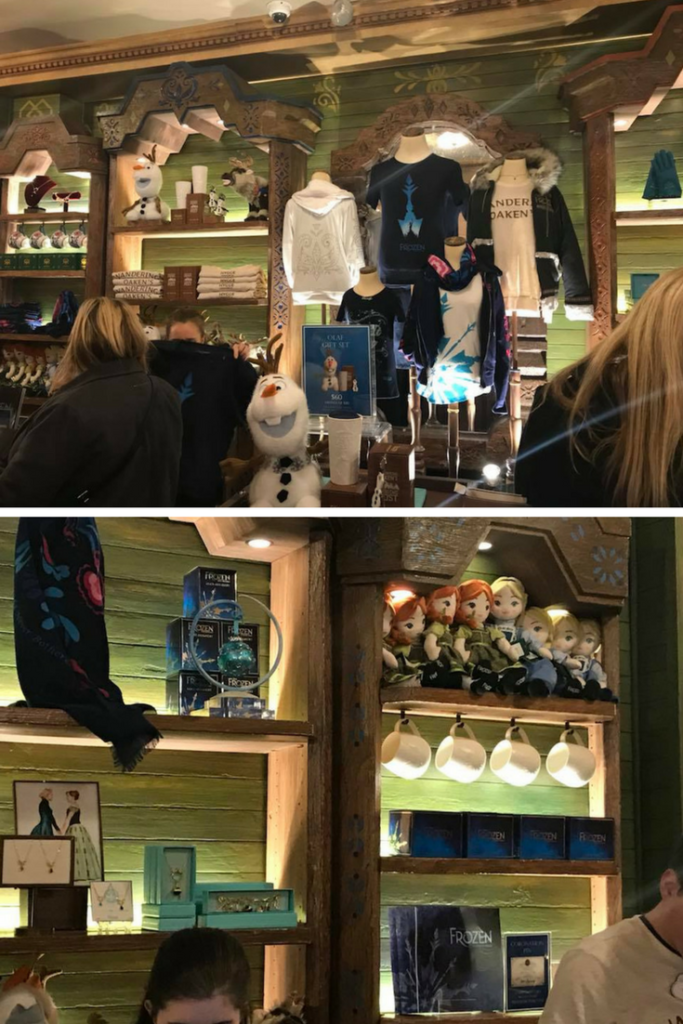 The souvenirs were all really cute too.  Again, expensive, even moreso than theme pa

rk prices.  But this stuff is exclusive to the Broadway musical, and I loved the idea that you couldn’t get it anywhere else. They had stuffed animals, t-shirts, sweatshirts, mugs, pins, programs, and more.  Prices were along the lines of: $45 for plush Olaf or Sven, $40 for a t-shirt, $60 for a sweatshirt, $20-25 for a mug, $25 for Elsa’s gloves.  I ended up picking out a white t-shirt with a snowflake and Elsa’s silhouette. I’m trying not to have regret for buying a $40 t-shirt.

And now onto the show! 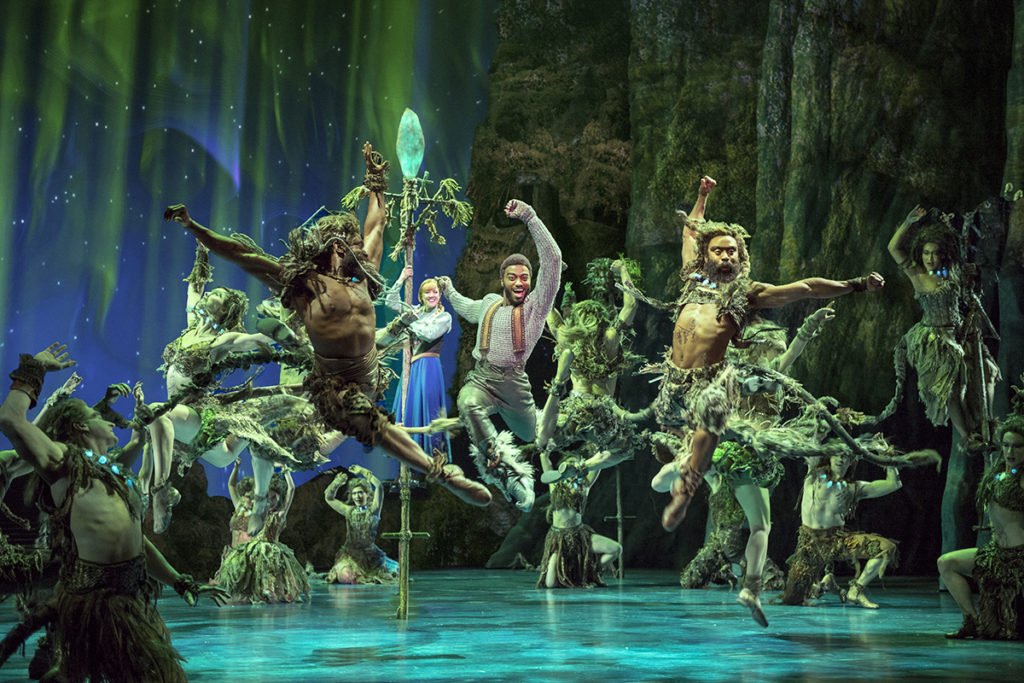 The interesting thing about the show is that most people in the audience will likely be very familiar with the story, the characters, and most of the songs.  They stick very closely to the original story with only a few plot changes and mostly additions of new musical numbers.  There were a couple of times they changed lyrics that I wasn’t quite sure why they did it. At the end of “Do you want to Build a Snowman?” Anna in the movie sings “Please, I know you’re in there / People are asking where you’ve been / They say have courage and I’m trying to, I’m right out here for you”…. etc. That whole line was changed, but the idea was the same, I just thought the new lyrics weren’t as good.

They added a number of new songs which I’ll talk about in more detail a little later, but I thought the majority of them were very good.  Instead of trolls they had “mountain people” who also happened to have very long tails. That was a bit of an odd choice but it was kinda cool looking too.  And there were a lot of extra jokes thrown in.  Interestingly, a lot of butt jokes.  Like, Anna talked about butts a lot more than I expected.  And Olaf made a couple of jokes about his rear part too.

Here’s a note about theater etiquette too: I know that it’s a popular movie/musical, and you probably know all the words. But especially if you’re a grown woman, DON’T SING ALONG to the songs. I paid almost $100 per ticket to hear Broadway actors sing, not you.  Don’t say the punchline to the jokes before they do.  I know them too, but I don’t want to hear you do it.  Yes, this happened. 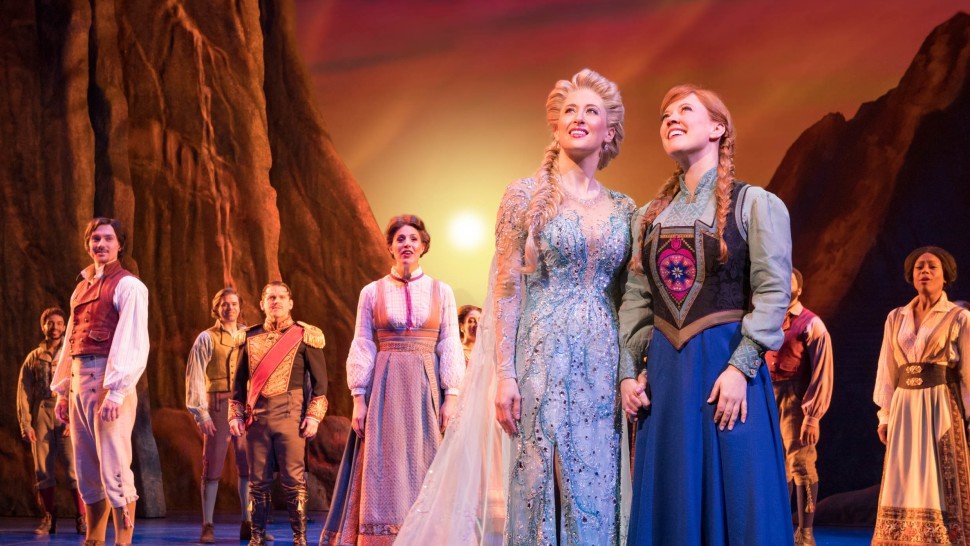 Everyone was extremely talented.  If you were worried about anyone being able to live up to Idina Menzel’s version of Let it Go, fear not: Caissie Levy nails it.  Her voice is excellent and powerful. The new song “Monster” is sung extremely well by her too.  Patti Murin as Anna captures her character perfectly without just being a rip off of Kristin Bell. She is very funny and has a beautiful voice as well.  Greg Hildreth as Olaf was fitting.  His voice was similar to Josh Gad’s, though I didn’t think he was quite as captivating.  John Riddle had a beautiful voice for Hans, at some points sounding almost Josh Groban-esque.  I thought his portrayal of the character was a little weaker though. Hans felt more pathetic and less evil than the movie. 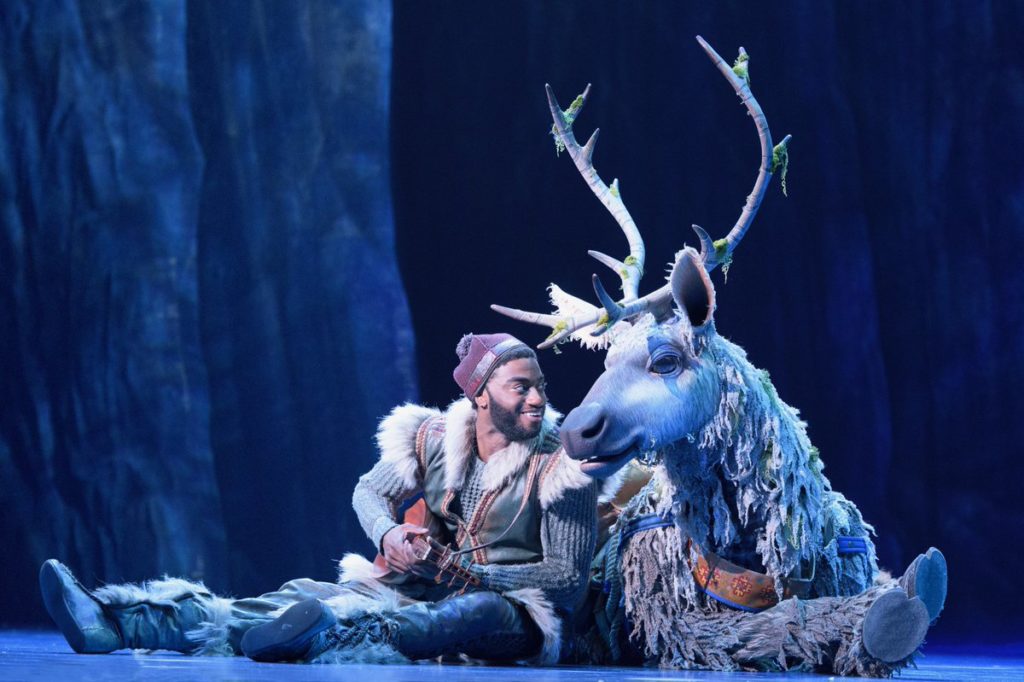 I am also so thrilled to see some diversity in the casting.  Kristoff is black, and it works.  They change the one line in Fixer Upper about his blond hair and it makes no difference.  And Jelani Alladin is great. He doesn’t do a ton of singing but he has a smooth, beautiful voice, and he puts his own spin on Kristoff that I really liked. Lots of color in the ensemble too.  Anna and Elsa’s father was also black, which is a bit of an odd choice though given their appearances.  It could be worse though. One time I saw a community theater performance of Children of Eden, and 10 year old Cain ages into 18 year old Cain by running off the stage as a kid and running back on as an adult – and he went from a small white kid to a big black guy.  Theater is a good place to use your imagination and suspend your disbelief a bit!

All of your favorite songs from the movie are there, pretty much the same: a few lyric changes here and there, or a dance break added in the middle.  But there were some new songs added which I really enjoyed.  Anna and Kristoff have a duet early on, at the point where he questions her for trying to marry a man she just met. They sing “What do you know about love?” And it was such a fun song. I was grooving in my seat and I can’t wait to download it and listen to it again and again.  Elsa also has a new song called “Monster” which I thought was so powerful and I totally loved.

The opening of Act 2 had a slightly “risque” number where Oaken’s friends and family come out of the Sauna with only leaves covering their bits and do a dance. It was hilarious though.  So, so funny.  It was called Hygge and I just couldn’t stop laughing. I love that they kind of pushed the envelope a bit and went for it.

Hans gets a somewhat unremarkable song called “Hans of the Southern Isles” and Elsa has another pretty song called “Dangerous to Dream.”  There are also some ensemble numbers added in. 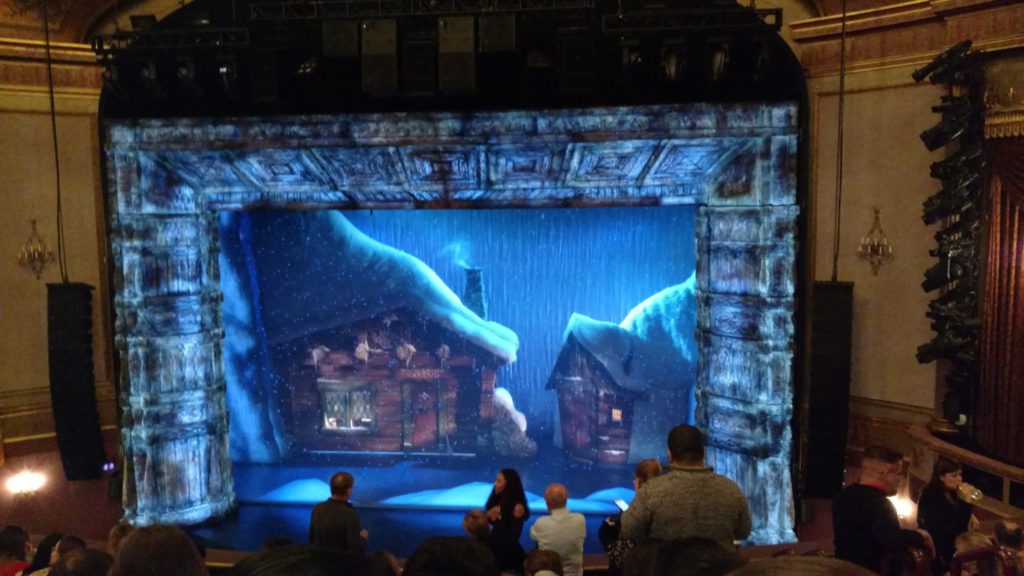 Perhaps the most impressive aspect of the show was the lighting and special effects. They had to be able to do a good job on this because it’s Frozen – how can you create snow and ice on stage? They did some really cool things with the lighting in particular.  The effects came off very well, at least from the mezzanine level! 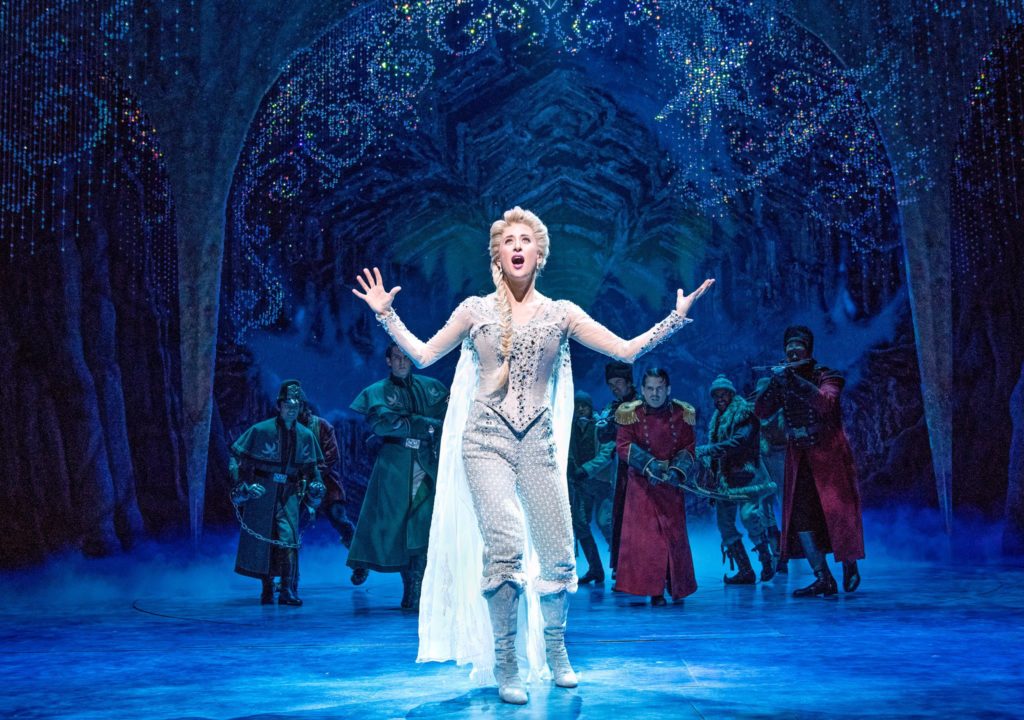 The costumes were good, but probably about what you would expect.  They mimic the movie pretty well. Elsa does the quick change in Let it Go which is pretty cool.  Her blue dress is sparkly and stunning.  But one thing that I really appreciated was the fact that halfway through Act 2 Elsa got to change into a pants outfit version of her blue dress.  It was gorgeous, still had the cape, but so much more practical while she’s fighting and on the run from Hans and his men!  She’s able to rock both the dress and the pants.

I really enjoyed Frozen the Musical on Broadway.  All aspects of it were good, but in particular I’m really excited about a few of the new songs they added. I can’t wait for the soundtrack so I can listen to them all the time!  If you’re a Frozen fan and you get the chance to see it, I would definitely recommend it!

Would you be interested in seeing Frozen the musical?