On our trip to Disney World in early September Jason and I managed to hit up every Food and Wine festival booth!  I’ve broken down our adventures into 4 separate posts.  This is part 2. Check out part 1 here, part 3 here, part 4 here, and Read more about the Epcot International Food and Wine Festival 2017 here.

Islands of the Caribbean 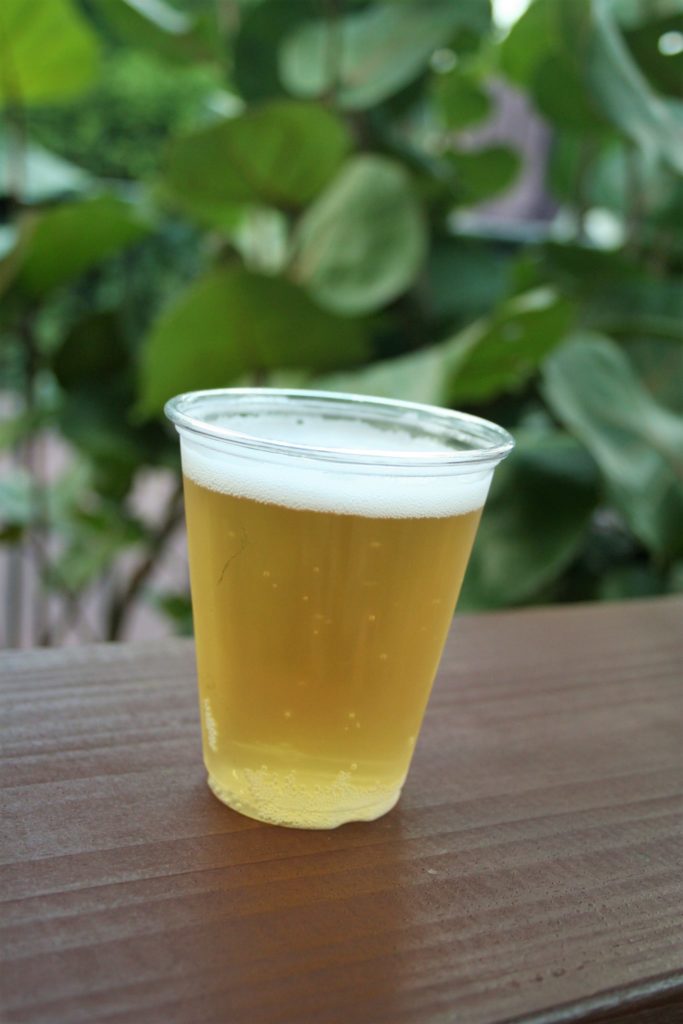 Because none of the food items were really calling to us here and we wanted to save stomach space for other booths, we went with the Carib Lager here.  It was a pleasant beer, light and refreshing in the Florida heat, if nothing too special.

I consider this one of the “cheat” stops in the passport because it’s technically not a Food and Wine booth since the Refreshment Port is there year round.  They’ve got the popular croissant doughnuts, dole whip, and chicken nuggets with pineapple sauce.  You can also get your dole whip with rum or try a Dragon Berry refresher cocktail. 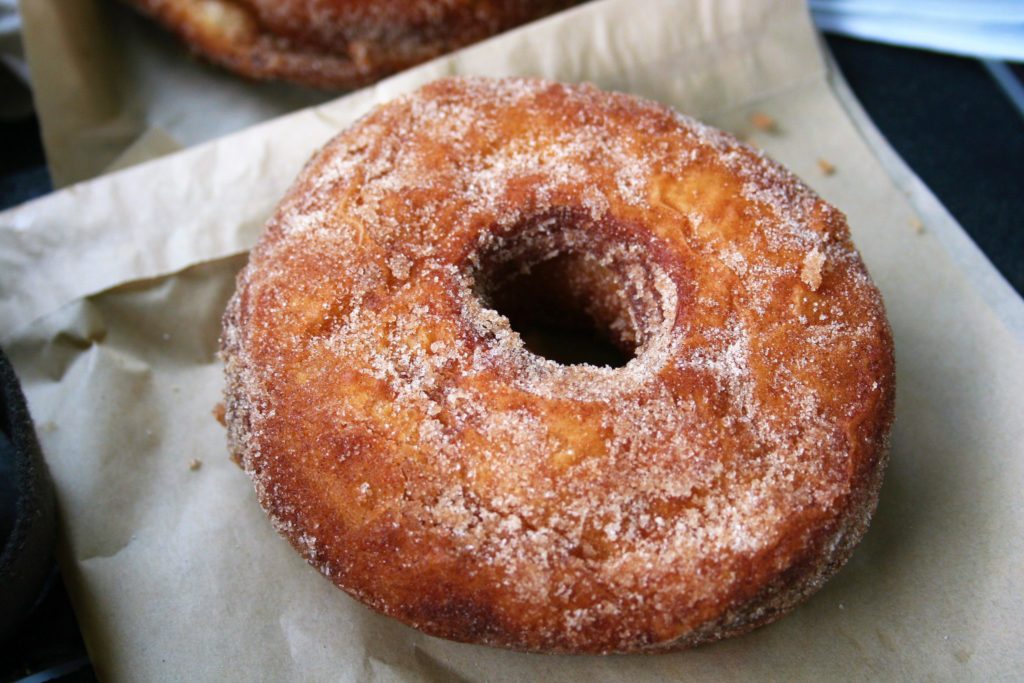 Jason had been dying to try the croissant doughnut anyway, so we decided to stop here to get one now so we could get it off the passport.  I held down the table while he went to buy it, and he returned with not one, but two (we’d been getting one of everything and splitting it to have stomach space!).  Apparently the cast member saw his anniversary pin and gave him an extra one so we didn’t have to share, so that was very sweet.  As was the croissant doughnut.  It was cinnamon-y, sugary, messy, and totally delicious.

Food offerings in New Zealand include mussels, a lamb meatball, and venison loin.  There are two wines as well as a frozen wine cocktail made with sauvignon blanc. 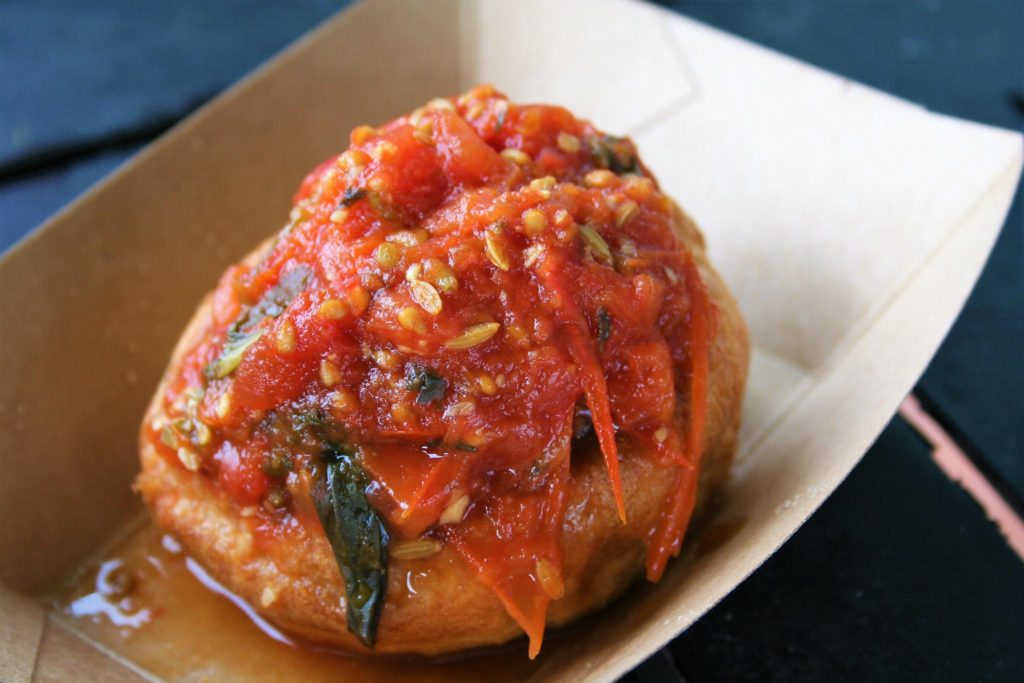 We tried the Lamb Meatball with spicy tomato chutney.  Though not in the description, it was also served on some sort of pastry.  There were a lot of really good flavors going on here, so we enjoyed it a lot, though we did find it a bit difficult to eat.

Australia features a shrimp dish, lamb, and dessert as well as a pale ale and two wines. 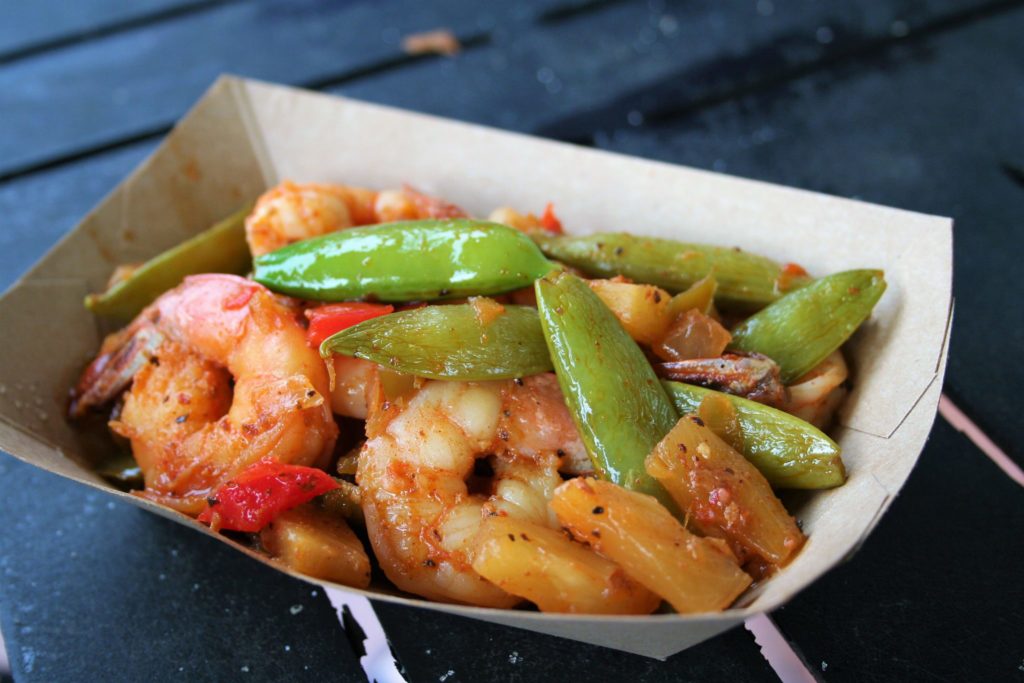 We chose to sample the Grilled Sweet and Spicy Bush Berry Shrimp with pineapple, pepper, onion, and snap peas.  There are some fun flavors going on with the sweetness from the pineapple contrasting with a spiciness in the peppers and sauce.  I was also impressed with the portion size, especially compared to many other dishes at the festival.  There were six large and tasty shrimp here for $5.25 (compare that to the shrimp dish in Mexico, which had 3 smaller shrimp for $6.50).

This new booth was hosted by Blue Diamond Almond Breeze, and it had a pretty big variety for a booth named after almonds!  There was a cauliflower risotto, tomato hummus, and banana almond soft-serve sundae.  Beverages included a strawberry smoothie and several types of champagne (because when you think almonds, you think champagne, right?). 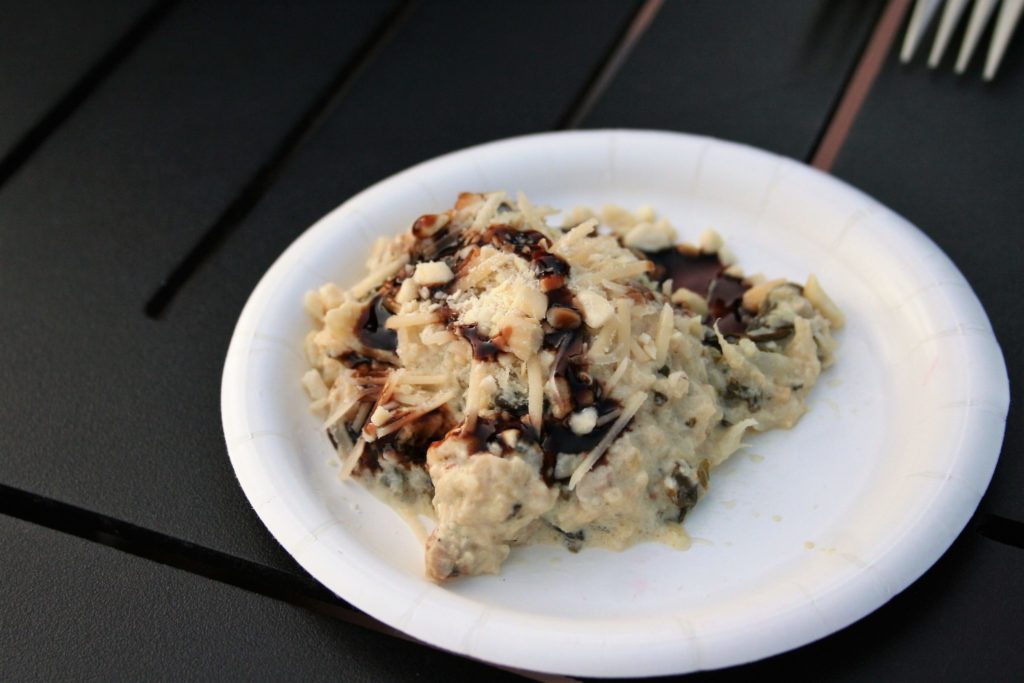 While all of the food sounded appealing to me, I decided to go with the most adventurous option: Cauliflower Risotto with pulled chicken, artichokes, spinach, and parmesan cheese topped with a balsamic vinegar.  It might not be much to look at, but I thought this was fantastic.  All of the flavors went together so well.  You got hints of a spinach and artichoke dip but spiced up with tangy balsamic.  This was definitely a festival favorite for me.

A country I’m willing to bet not many are familiar with, the Patagonia booth has a beef empanada, grilled beef skewer, and two wines. 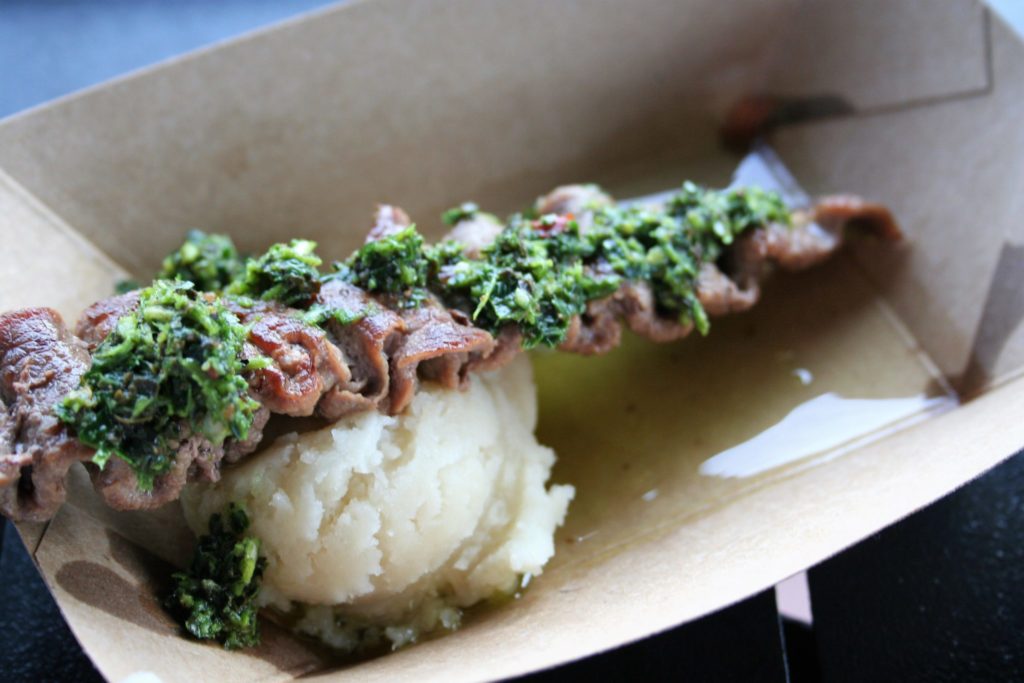 This was quite possibly the most difficult booth to decide what to eat.  Nothing sounding super appealing.  In the end we went with the Grilled Beef Skewer with chimichurri sauce and boniato puree.  And it was fine – not bad, but nothing special.  The chimichurri itself was actually pretty good, but it was incredibly oily.  In the photo I think you can actually see the pool of oil at the bottom of this dish.

Lots of great options at the Hawai’i booth!  For food you can choose from the Kalua pork slider, tuna tataki, teriyaki-glazed SPAM hash, and a passion fruit cheesecake.  Drinks include a Lager from the Maui Brewing Company, a pineapple wine, and a mai tai. 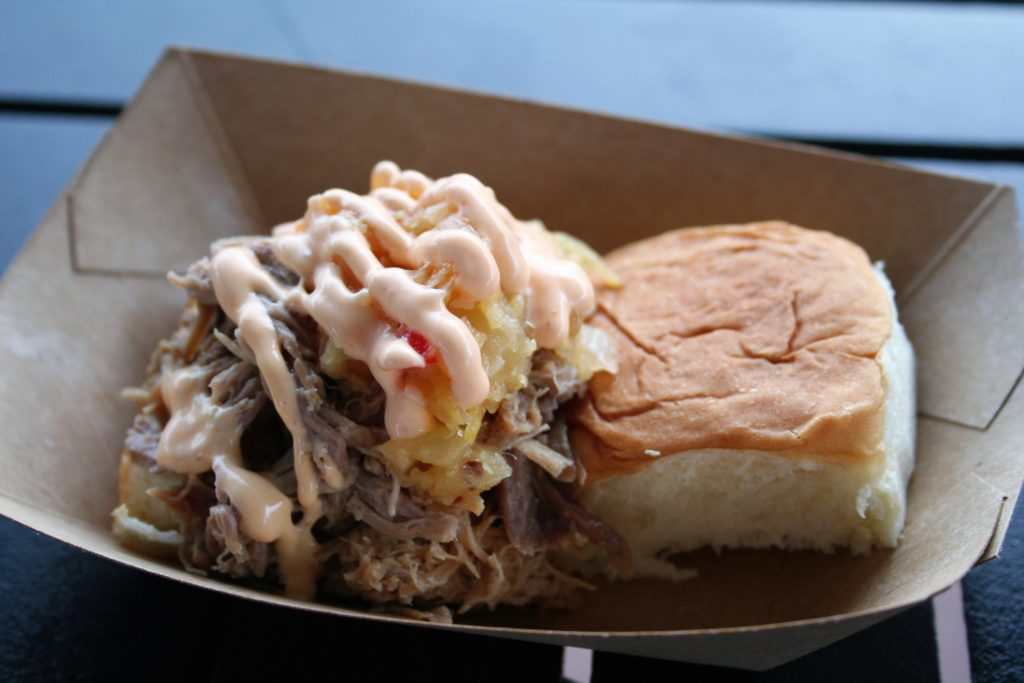 I had a hard time making a decision here for the opposite reason of Patagonia – everything sounded good!  In the end I went with a popular festival dish, the Kalua Pork Slider with sweet and sour pineapple chutney and spicy mayonnaise.  There’s a reason why so many people love this dish every year.  It’s just perfectly done, with flavorful pulled pork, sweet pineapple, and that delicious spicy mayonnaise.  I would not complain if a full-size version of this item was available year round somewhere.

Food here includes a crispy chicken and a roasted beet salad, while drinks include 3 types of ciders and a mango wine. 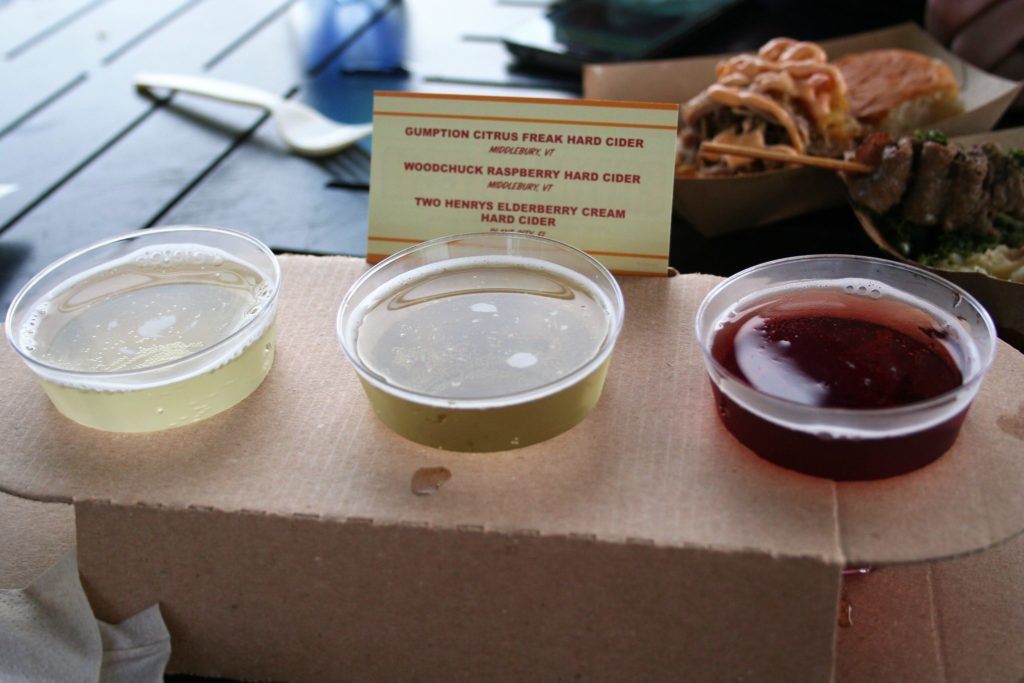 Once I saw the menu I immediately knew what I was ordering – the cider flight! It included the Gumption Citrus Freak Hard Cider, Woodchuck Raspberry hard cider, and Two Henrys Elderberry Cream hard cider.  I thoroughly enjoyed all 3 of them.  My favorite was probably the elderberry cream with the citrus a close second, though Jason favored the raspberry.  Honestly, they were all excellent and I was glad I got the chance to try all 3.

I like Greece because it’s one of the more unique booths at the festival, with items like Greek nachos, the “taste of Greece” (featuring grape leaves, grilled octopus, and feta cheese dip), spanakopita, and bougatsa.  There are also 3 Greek wines you’re probably not familiar with – moscofilero, assyrtiko, and a red blend. 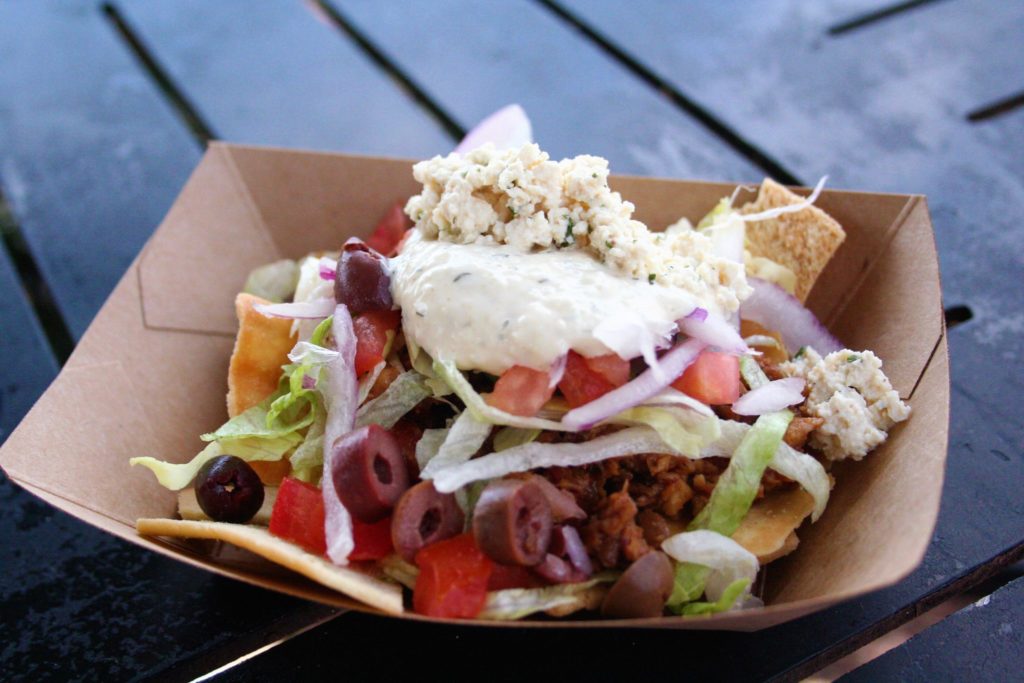 Having seen pictures and read the description, I was all about the Loaded Greek “nachos” with pita chips, meatless sausage crumbles, and vegan tzatziki.  And it did not disappoint!  The meatless sausage was honestly delicious and very flavorful – it almost reminded me of chorizo.  I just had to pick out the olives since I’m not really a fan, but that wasn’t a big deal.  I marked this as another one of my favorites from everything I ate.

We love eating at our local Thai restaurant, so we were curious to see what was here.  There was a chicken dish, shrimp and scallop cake, and curry beef dish.  Also a Thai wine and beer here. 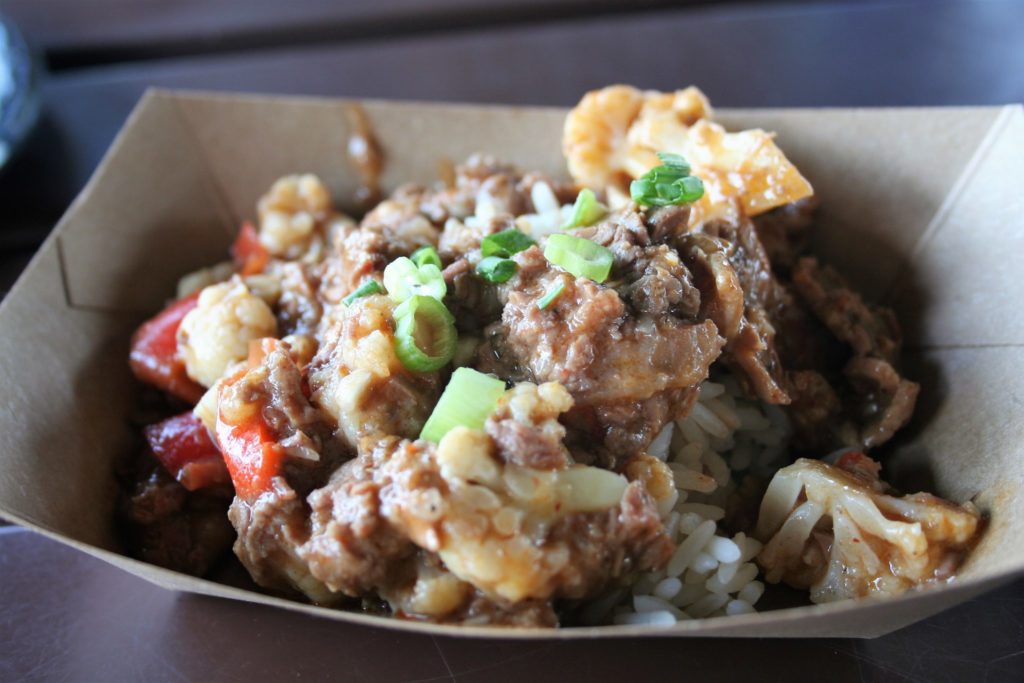 It was hard to decide which food dish to go with, but given the name we chose the Red Hot Spicy Thai Curry Beef with steamed rice.  Unfortunately I think we made the wrong choice here.  While there was a slight kick to it, I would certainly not call it “red hot spicy.”  The flavor just felt very “one note” – a slight spiciness and not much else, certainly not the bold Thai curry flavors we’re used to.  Nothing about this dish impressed us.  I suppose one of the downsides of attending the festival so early is not being able to read other reviews.  Having perused some other blogs now I would definitely have gone with the chicken peanut dish over this.

Which items from these booths sounds the best to you?