You are here: Home / Disney World / Celebrating the holidays at Epcot 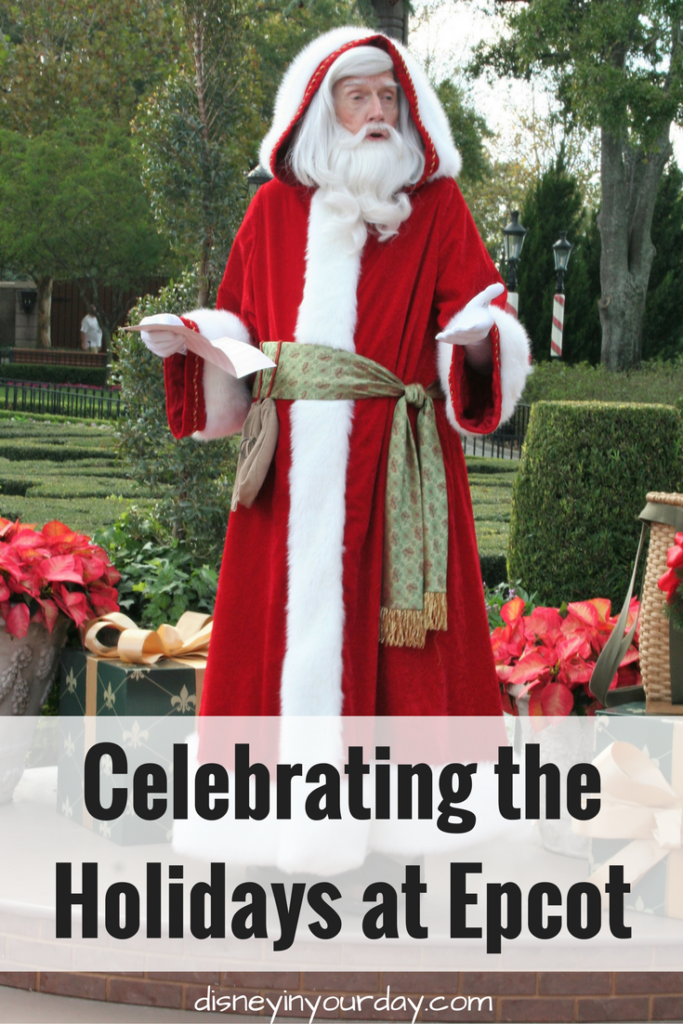 Epcot may not have a big, showy spectacular for the holidays like Magic Kingdom (the ice castle, Mickey’s Very Merry Christmas Party, and holiday Wishes) or Hollywood Studios (last year, Jingle Bell, Jingle BAM!).  Illuminations does have a special holiday tag at the end, but it’s not a full holiday show.  And there is Candlelight Processional, which is totally amazing – but also requires either waiting on line forever or buying a pricey dining package (though I would totally, 100% recommend doing it.  I just didn’t have time this year.).  However, Epcot is still a really magical place to be for the holidays – especially around the World Showcase. 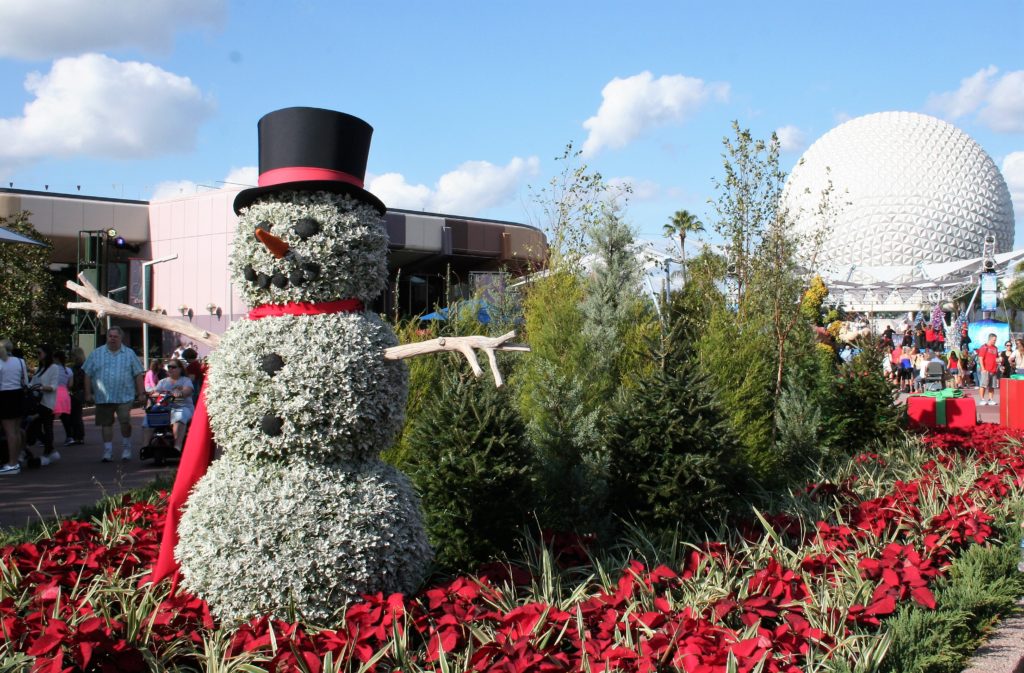 Epcot has been doing “Holidays around the World” for a few years, but every year I feel like they add a little bit more.  Most of the country’s pavilions have their own Christmas decorations, and there are special little holiday shows or performances as well.  New this year was a series of food booths with holiday specials.  There is even a little passport like you can get for Food and Wine or Flower and Garden to keep track of all the Holiday events and meals going on.

Though I only spent about 3 hours in Epcot during my quick weekend trip in December 2016, I was able to take in a good amount of what they had to offer (though nowhere near everything!).  Here’s a little bit of what I got to experience: 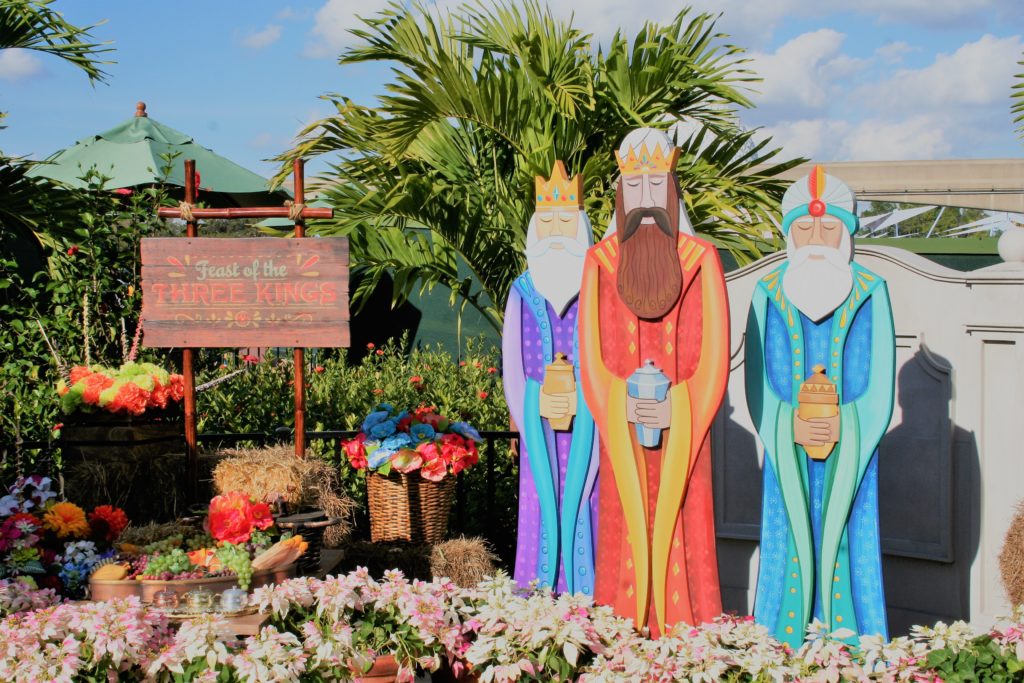 I was excited to try new food booths, but the one bummer about the way they did these was the fact that they served full size portions instead of tastings like at Food and Wine.  There were so many things I wanted to try, but being only one Becky with a small-ish stomach, I only sampled two items. 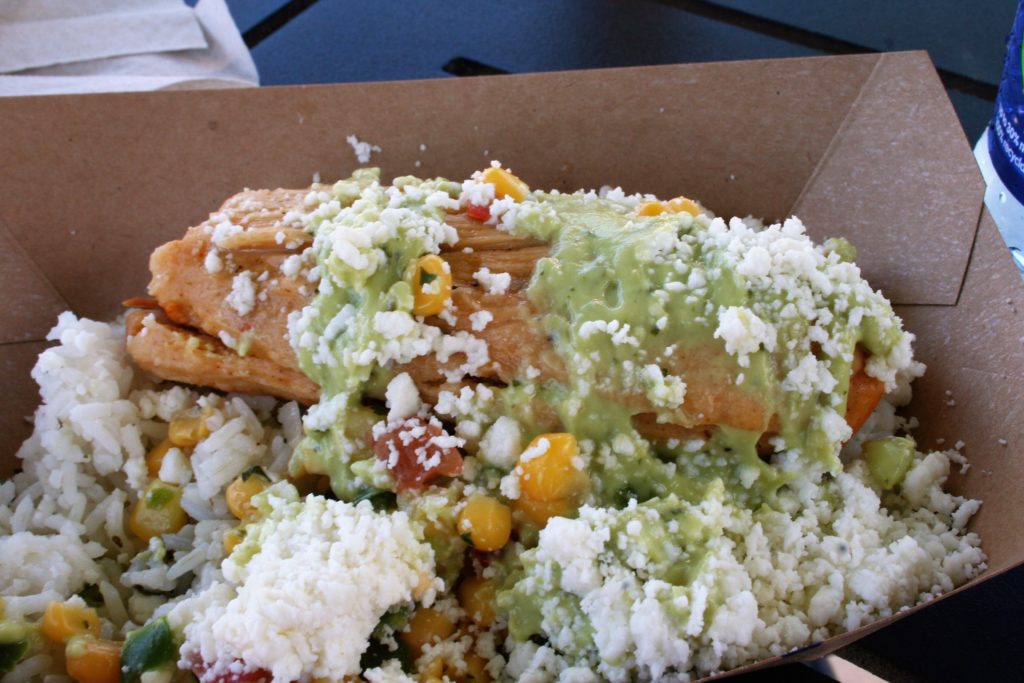 The first was at the Feast of the Three Kings booth.  This one is close to the entrance of World Showcase if you head toward the Canada pavilion.  It’s a really pretty area and well decorated.  I got the beef tamale with an avocado crema served on cilantro rice.  It was a nice, hearty portion for $12 and was decent.  The tamale itself was okay, the beef was pretty tasty, and the avocado crema was delicious – I wish there had been more of that on it.

The second item I was able to try was the chocolate peppermint sundae at the Sweets and Treats booth.  It was your basic soft serve with whipped cream and candy cane pieces on top.  I loved the candy cane bits in the ice cream, it was so delicious.  Last year they offered this as well but I got the alcoholic version – basically the same thing but a little bit smaller, and with peppermint schnapps.  I was trying to avoid alcohol since I planned to run 25 miles the next day, but I definitely think the one with peppermint schnapps was better and I would get that again if I returned.

Almost every country has some sort of extra show or street entertainment for the holidays.  This is probably my favorite part of being at Epcot during this time of year (besides Candlelight Processional).  It’s really neat because a lot of the countries get a chance to feature their own versions of the holiday, which is really interesting.  I was able to catch a good amount of these little shows as I took my stroll around the World Showcase. 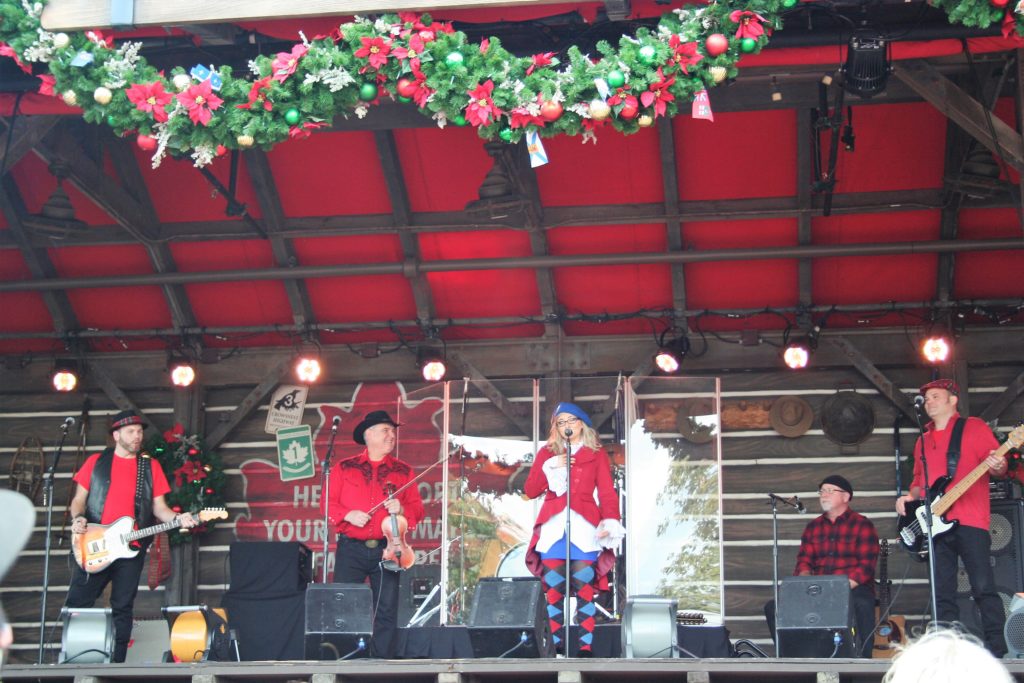 In Canada I stopped to listen to the band they had playing traditional Canadian Christmas songs.  Not all that surprisingly, Canadian Christmas Carols are pretty similar to American ones.  However, they also did some in French, which was neat.  And everyone in the band was very talented. 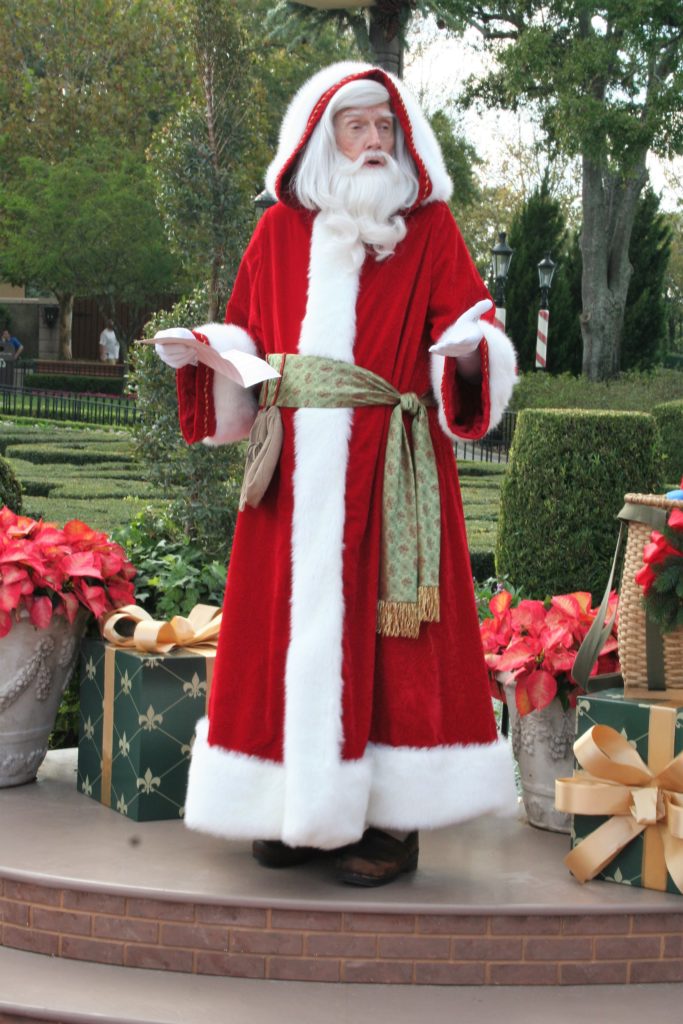 France had their version of Santa Claus, and he was an absolute delight.  He told a little story about a young girl living in France and what she wanted for Christmas.  He was funny and perfect for the part.  He just had me smiling for the whole time of his little 10 minute presentation.  He also stayed to take photos with the children afterward.

The American pavilion had a number of things going on – a Hanukkah storyteller, a Kwanzaa presentation, and a meet and greet with Santa and Mrs. Claus.  However, the real standout not just here but in all of World Showcase was Voices of Liberty.  They are an a capella group and they perform all year round, but this time of year they do Christmas songs.  Their voices and harmonies are flawless, and I am completely amazed every time I hear them perform.

I briefly saw the Chinese dragon presentation in China, though I didn’t get a chance to catch the story behind it.  They also offered a photo opp afterward.  The same thing happened in Norway – I caught just the tail end of the stories being told by a mischevious Christmas gnome. 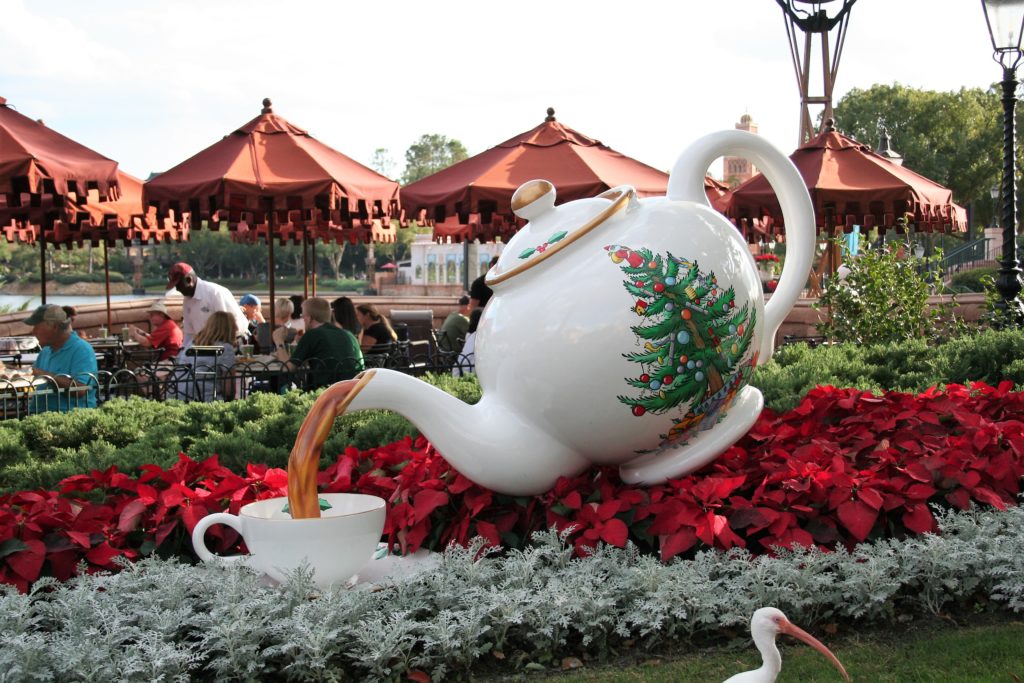 Most of the pavilions were decorated for Christmas (though it looked like Morocco, Japan, and China were not).  I really enjoyed everything in the UK, especially their big Christmas teapot. 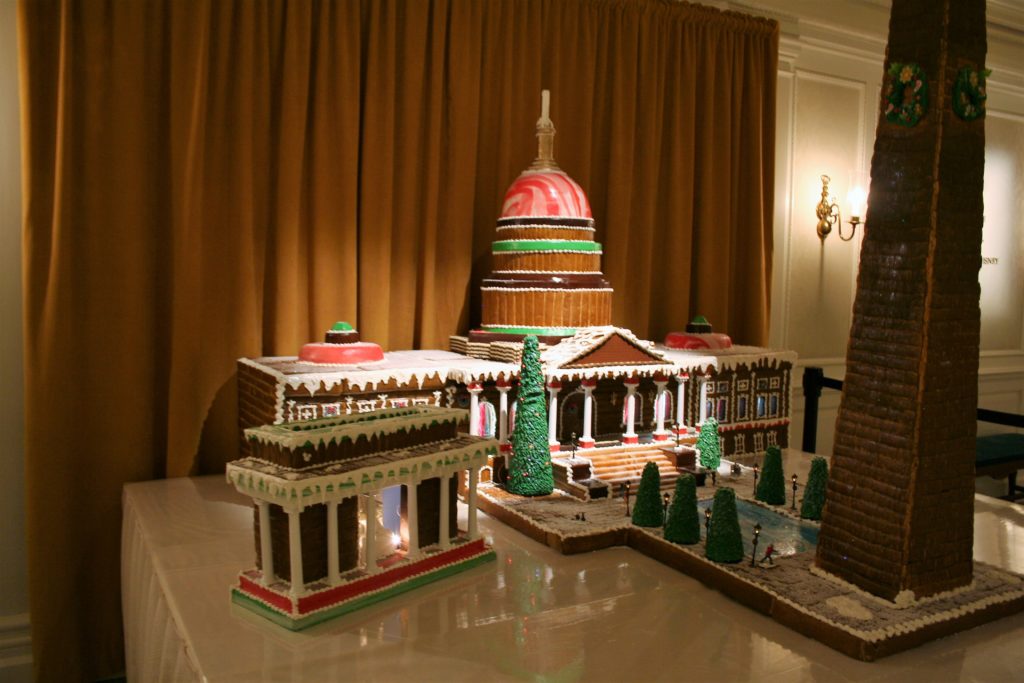 France has a beautiful set-up as well.  Behind the fountains that are normally there they have Christmas “ornaments” set up with famous French landmarks inside.  Inside of the American Adventure pavilion they also had a gingerbread version of the capitol building, Washington Monument, and Lincoln Memorial!

Most of the other pavilions at least had some sort of garland, wreaths, or other nice decorations up.

If you’re at Disney for the holiday season it’s easy to get caught up in all of the things that are focused on – Mickey’s Very Merry Christmas Party, Jingle Bell Jingle BAM!, Candlelight Processional, and the new drone show at Disney Springs.  But a trip through the World Showcase is truly a magical experience this time of year.

What part of Holidays around the World do you think you would enjoy the most?

For more Disney Holiday fun,
check out the other great posts from the Blogorail!