You are here: Home / Uncategorized / My Disneyland/D23 Expo Haul 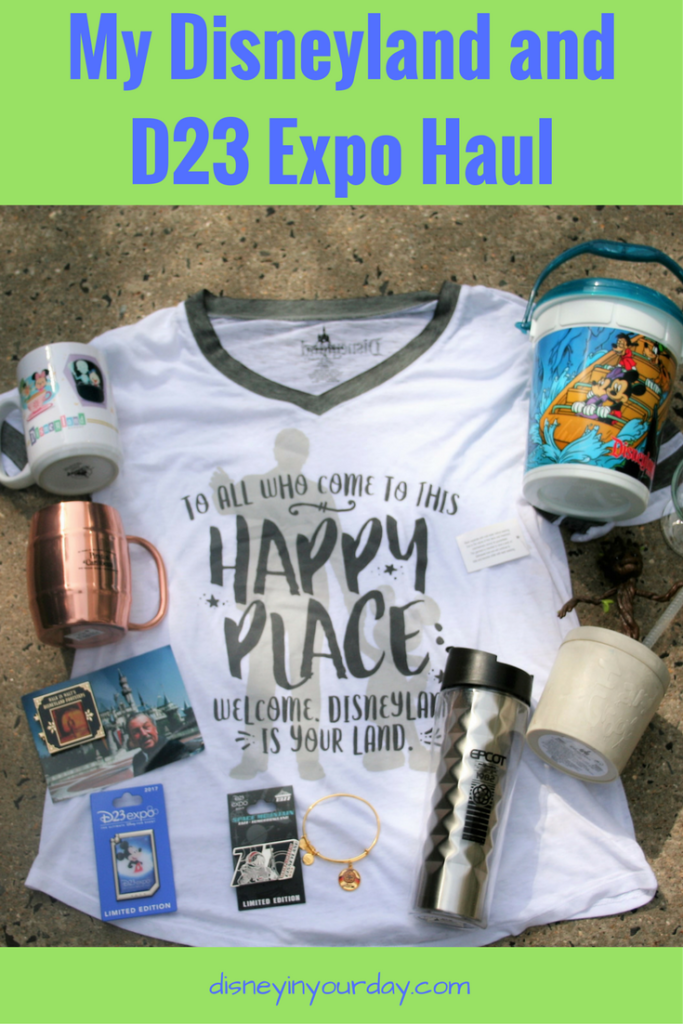 I don’t think I buy as much Disney merchandise as some big fans, but I also buy more than others.  I’ve tried to stick to buying things that I really love and will actually use.  I like having these items as reminders of my trip and the good memories associated with it.  Disney has so much creative and fun stuff that they sell, so I love seeing what new merchandise is out there!  That’s why I started sharing a blog post every time I took a big Disney trip and bought some items.  I figured I’d share what I’ve been picking up as well. 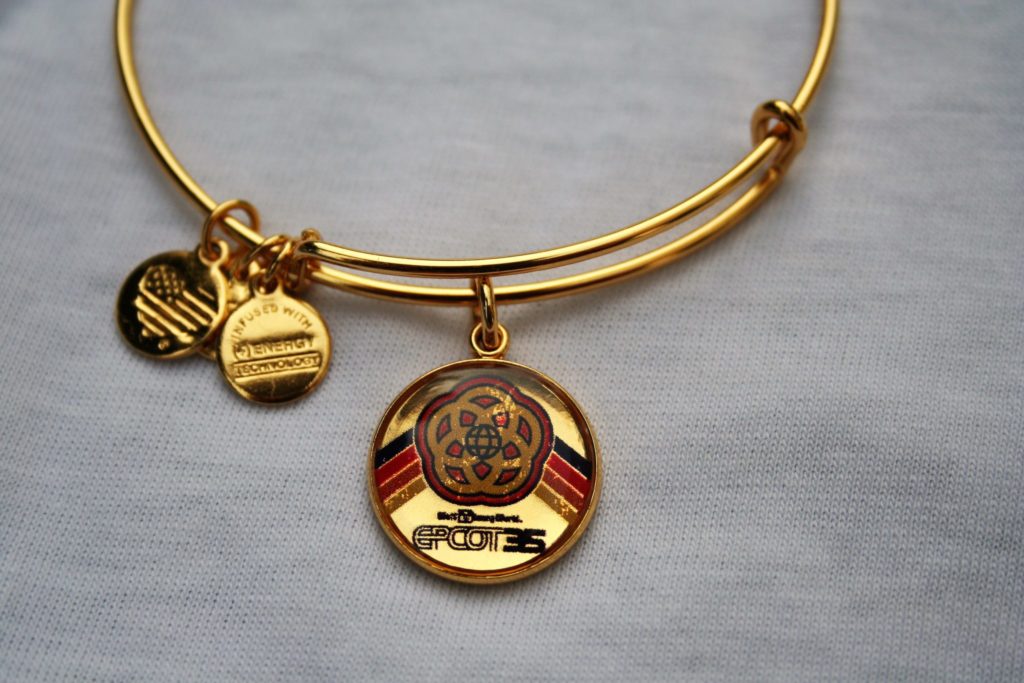 The D23 Expo was celebrating a couple of attractions that were celebrating anniversaries, so a lot of the merchandise focused on Pirates of the Caribbean, Space Mountain, Star Tours, and Epcot. They had Alex and Ani bracelets for each of them, and I picked up this retro style Epcot35 one in gold. 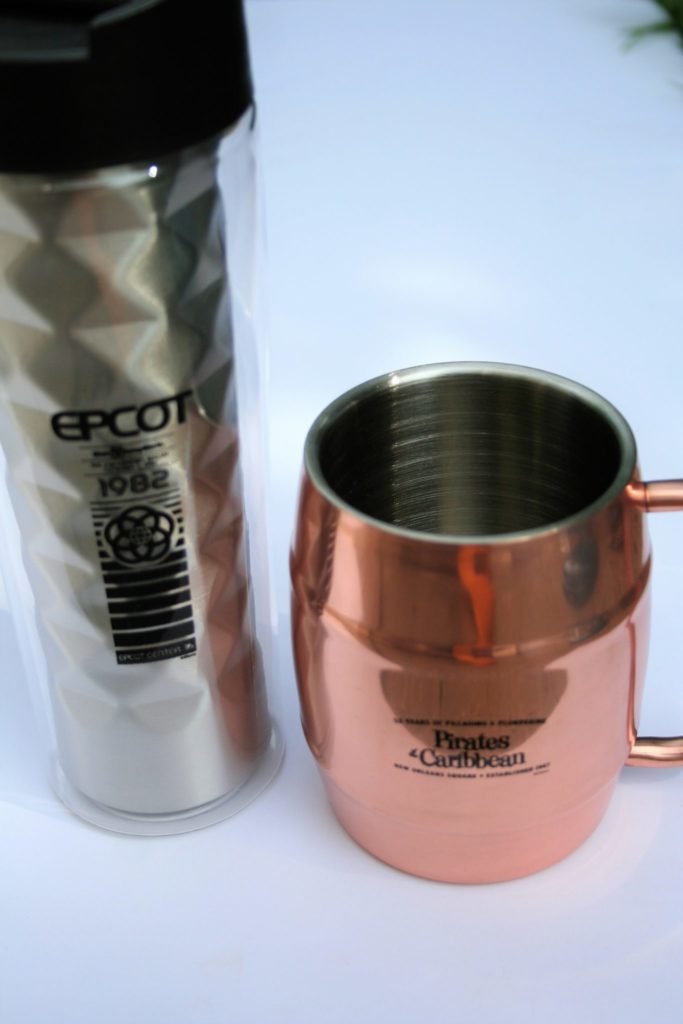 Also from the D23 Expo were these two items.  One is for me, and one is for a friend.  I love the copper style mug for Pirates of the Caribbean – it feels fun and “themed,” and I don’t have anything like this yet.  If I feel the need to make a Moscow mule at home I’ll be able to a suitable mug for it now!  The Epcot tumbler is super cool looking with its Spaceship Earth pattern and I’m glad I was able to grab it for a friend who wanted it!  I’ll deliver it to her when I see her next month. 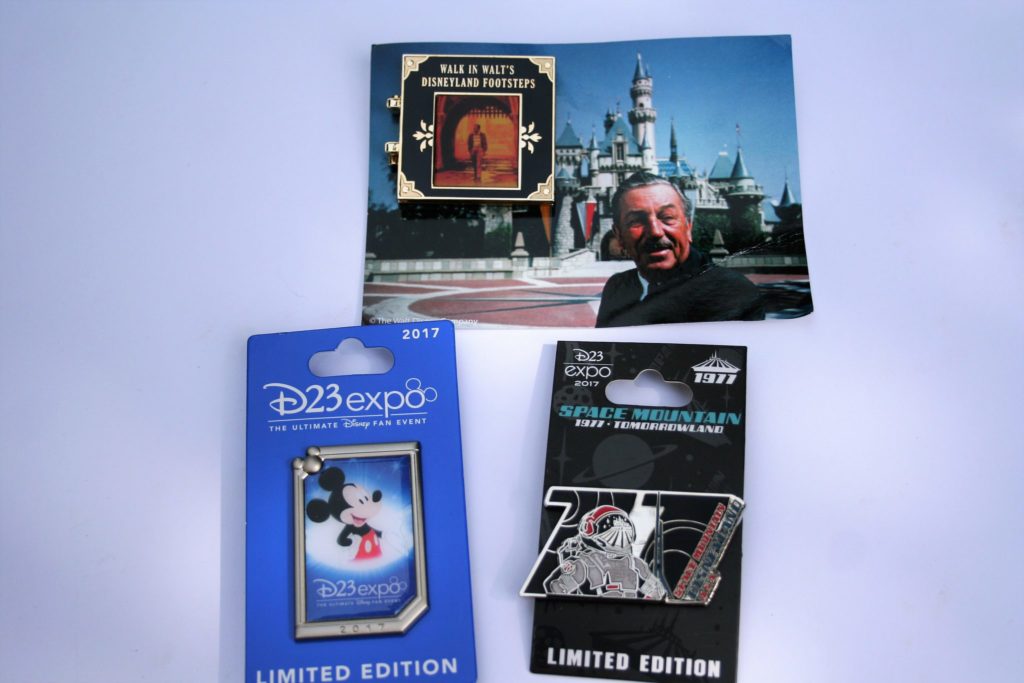 I try to pick up at least one pin every trip to represent that trip, and this time around I got a couple.  The Space Mountain one was a gift for a friend who is a big fan of Space Mountain (there was also a limited edition Bambi pin from D23 for a different friend, but I’d already given her the pin before I took these photos).  I bought a Mickey D23 Expo pin for myself.  And when we did the Walk in Walt’s Footsteps tour at Disneyland, they gave us a fun pin at the end of that tour. 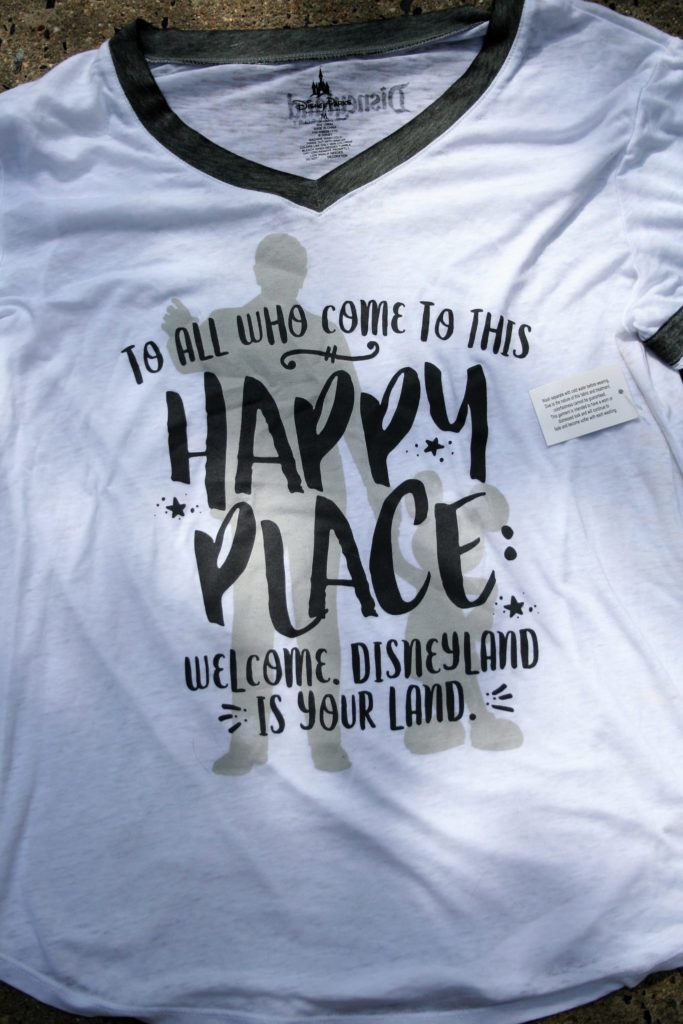 I saw a number of t-shirts which I absolutely loved, so it was hard to pick which one I wanted.  But I kept coming back to this one.  It seemed fitting for our trip.  It represented Disneyland (rather than being more generic Disney).  And I’ve always loved this part of Walt’s speech.  I absolutely think of the Disney parks as a “happy place,” and I love the idea that he said Disneyland is “your land.”  Given the fact that we were there for the anniversary of opening day, it seemed like a great shirt.  The friend who I traveled with bought the same one. 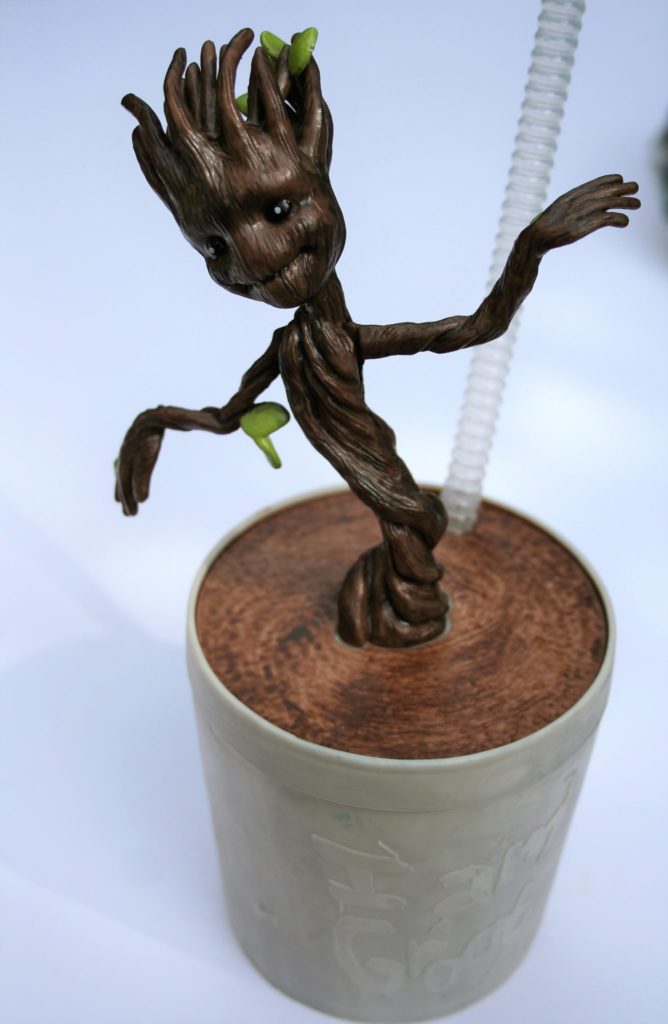 I might have become a bit obsessed with Guardians of the Galaxy, and most specifically baby Groot.  So when I saw they were selling this adorable Groot cup, I obviously had to get it.  He even wiggles around a little bit! 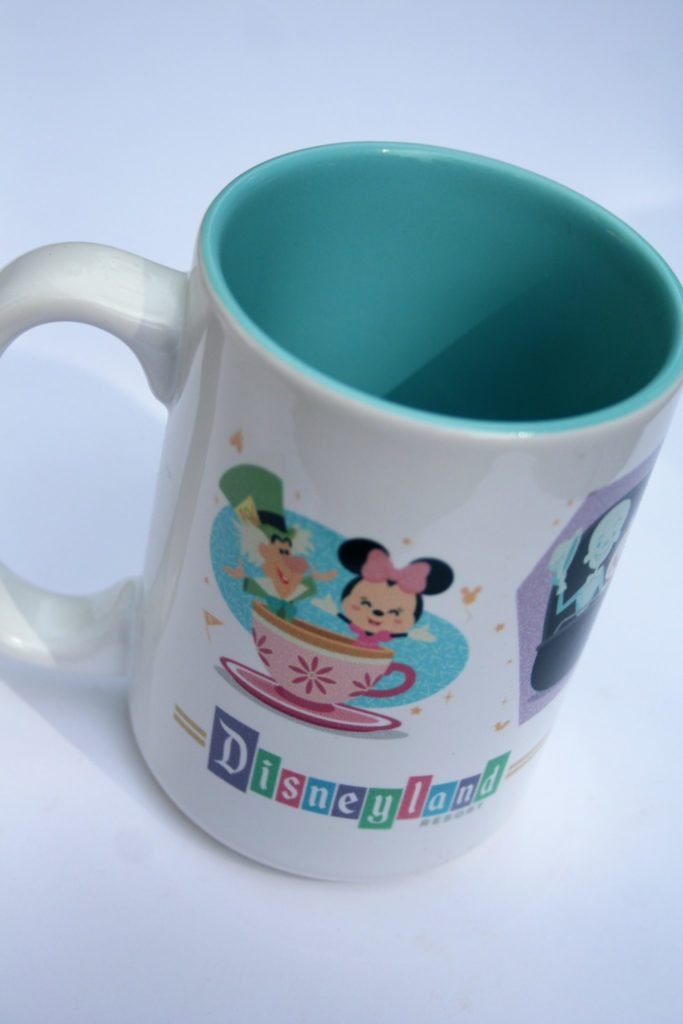 Every Disney trip needs a mug, of course.  I wanted to find a cute Disneyland mug and this was my favorite that I came across.  It represents some of the best Disneyland attractions and classic characters.  Read more about this mug in my mug of the month blog post. 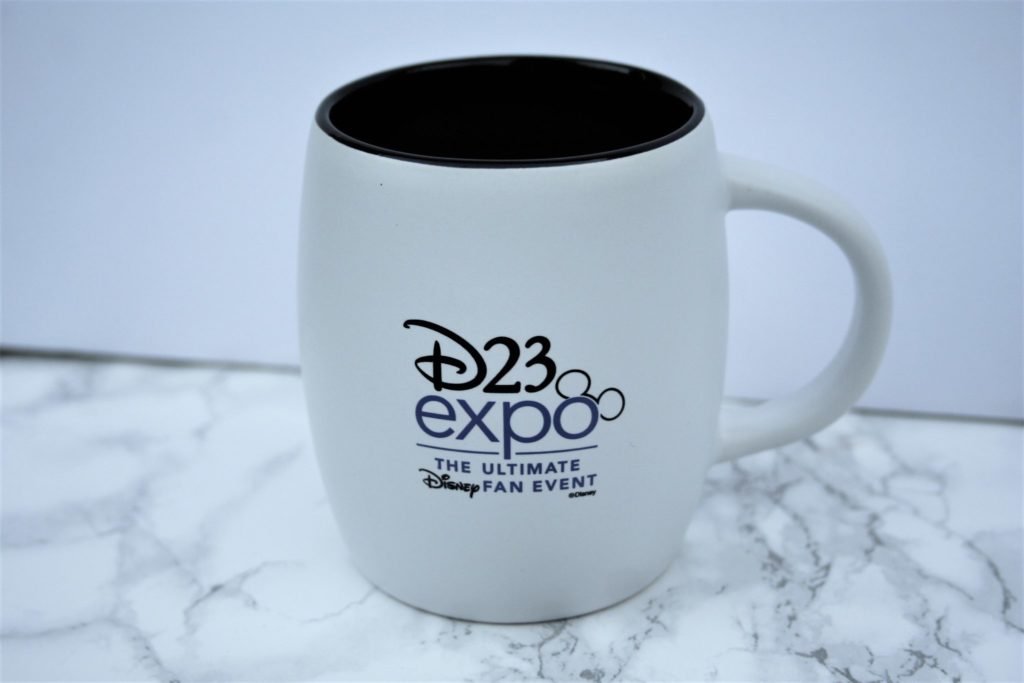 And since I was attending the D23 Expo I obviously needed a mug from there as well.  This one is simple but it has the D23 logo on it, and I like the more unique rounded shape of it.  You can get some additional thoughts on the D23 Expo mug by reading this mug of the month post. 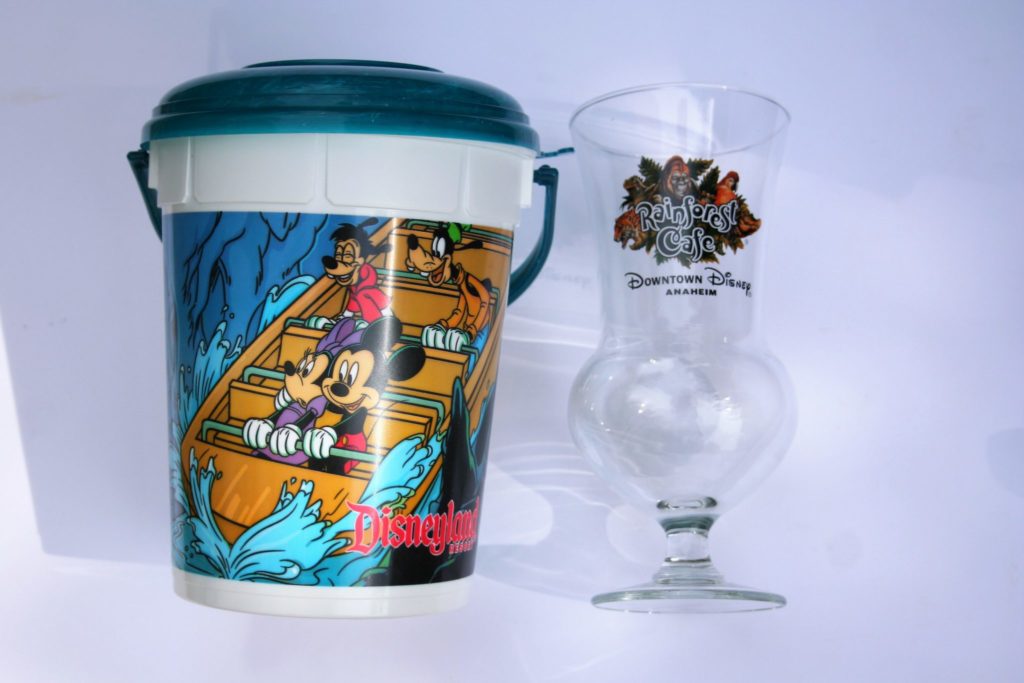 And then a few other things I collected during the trip.  I grabbed some popcorn while we waited to watch the Main Street Electrical parade, so I ended up with this popcorn bucket.  At first I thought it was Splash Mountain, which didn’t seem to make sense since Disneyland’s Splash Mountain doesn’t have you sitting next to anyone.  But then I realized it was Pirates of the Caribbean.  I also got a souvenir glass from Rainforest Cafe by ordering a fancy fun drink there.  I’m glad this one says “Anaheim” on it because I already have a glass like this from the Rainforest Cafe in Orlando. 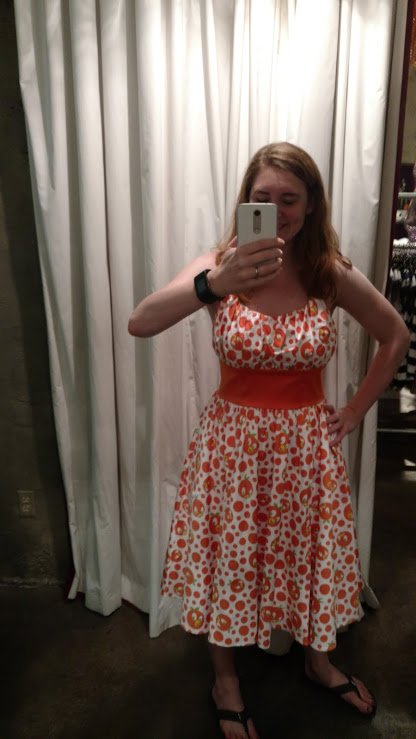 The last thing I got, my big purchase, was one of the new Disney dresses.  These came out a couple of months ago and as a huge orange bird fan, I obviously needed the orange bird dress.  However, it sold out within days and even with friends down in the area I was never able to get my hands on it.  Well, on our last day in California we were leaving the parks and walking through Downtown Disney, and there it was in the window!  It had just been stocked that day.  I was surprised they even had the orange bird dress since it’s really a Florida thing, but I snatched it up immediately!  I can’t wait to wear it when I’m in Disney World in September.

What’s your favorite item that I picked up from my time in Disneyland and at the D23 Expo?