You are here: Home / Mug of the Month / Disney mug of the month: Magic Kingdom Starbucks 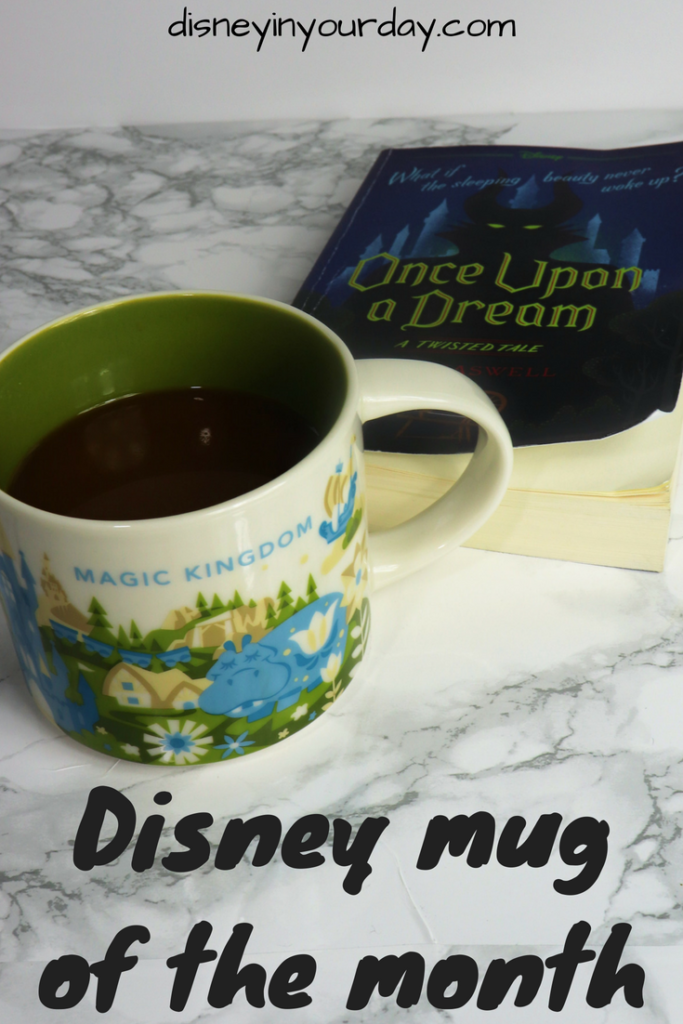 The Starbucks “You are Here” mugs have been popular now for awhile all over the world, and of course Disney World is no exception.  You can find these fun mugs at almost any major city (I see the Philadelphia ones around here all the time). Each of the Disney theme parks has a mug, and in true Disney fashion they have changed and updated them a number of times. After all, if you have the first Starbucks Magic Kingdom mug but then they come out with a cool second design, you have to get that too, right? 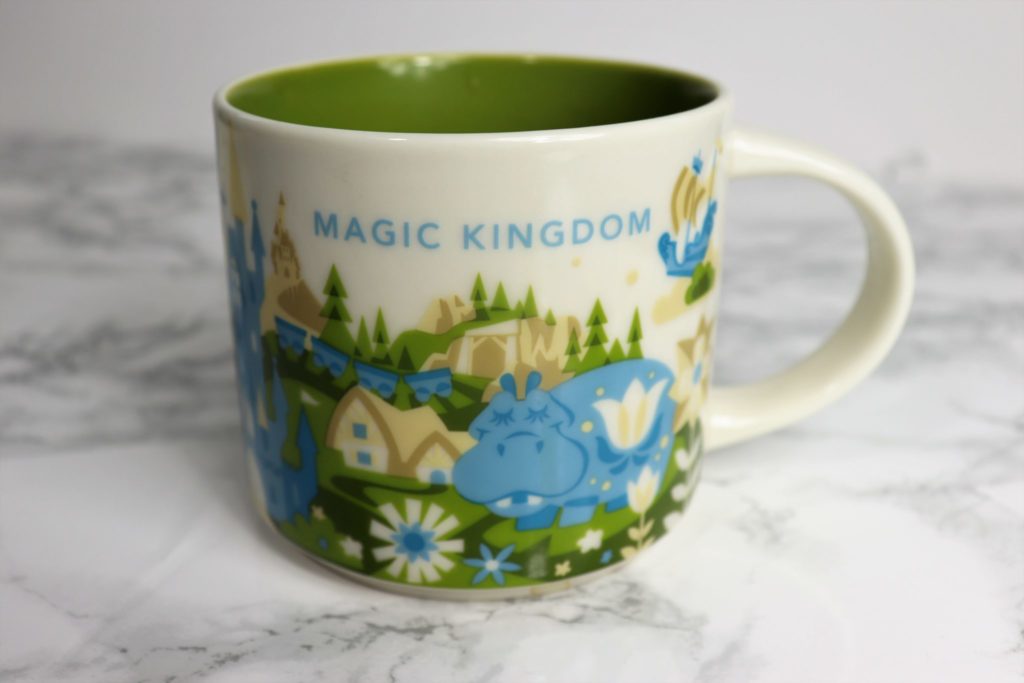 This is the second Magic Kingdom mug Starbucks has made, though they currently have a third one out (that one is more of a Tomorrowland feel). This one doesn’t have the bright Fantasyland colors that I would expect, as it’s mostly focused on blues, greens, and browns.  I still like it though.  On the one side of the mug is the Magic Kingdom name, and you can see a hippo from It’s a Small World, 7 Dwarfs Mine Train, and way in the corner you can catch a glimpse of the ride vehicle from Peter Pan’s Flight.

I like what’s around the other side even better. You’ve got Cinderella Castle in all it’s glory, because really – what’s a Fantasyland/Magic Kingdom mug without the castle? Dumbo’s flying around, and they also have the sword in the stone from in front of the carousel. I’ve always had a soft spot for Excalibur so I like to see that it’s included. 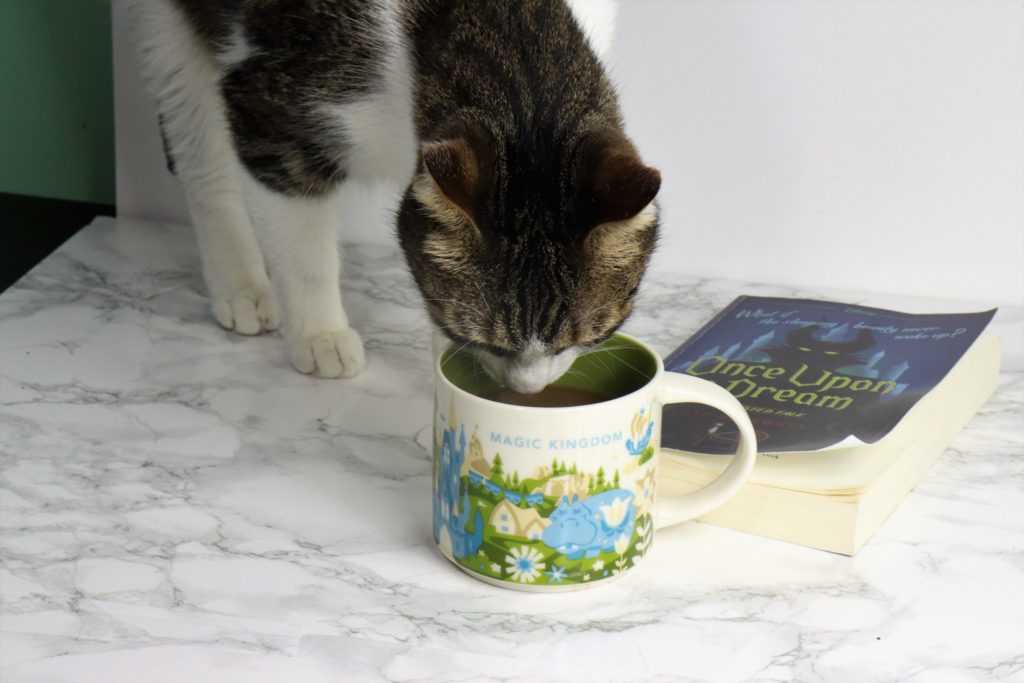 What’s in my mug: Coffee, of course, but I’m not the only one drinking it! My cat Samwise has taken a liking to coffee. I don’t let him drink it because it’s not good for cats, but he still tries when he comes across my coffee mugs. He tried to crash the photo shoot this time just to get a taste! 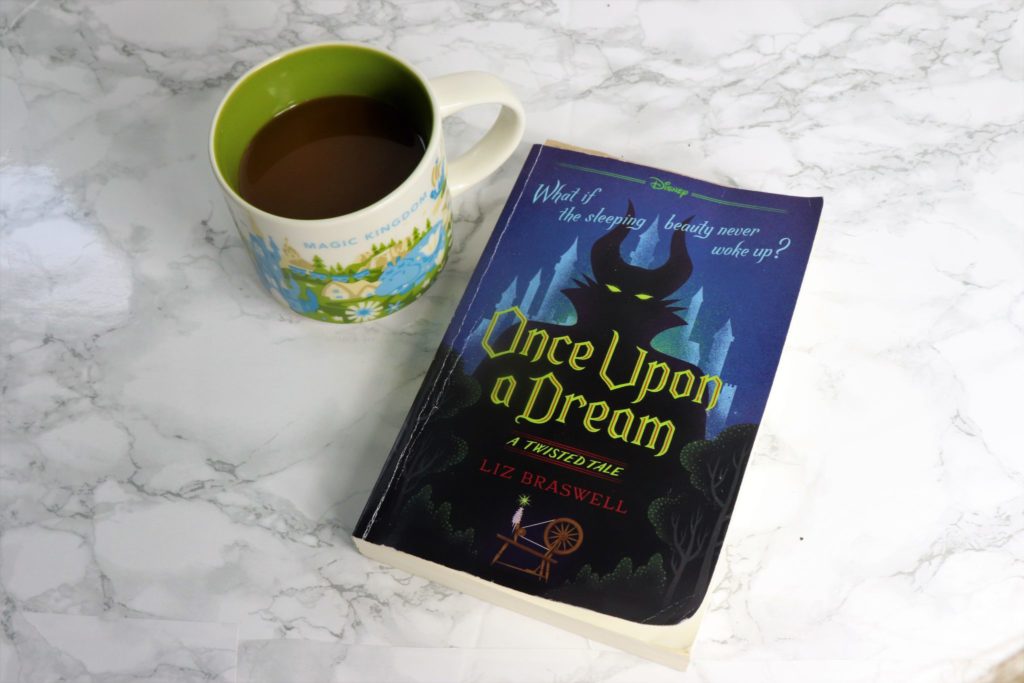 What I’m currently reading: I’ve just started reading another twisted fairy tale, this time based on Sleeping Beauty. It’s called Once Upon A Dream, and it asks the question “What if Sleeping Beauty never woke up?” If the Prince’s kiss hadn’t worked, what would have happened? I’m enjoying it so far. This is also the choice for the brand new online Disney book club I’ve started! So if you’re interested in reading and discussing this book stop on over to Facebook and join our group! We’re going to spend the month of September reading it and then will have all of October to discuss it. The more the merrier!