You are here: Home / Disney World / Dinner at The Edison

The Edison had been at the top of my list of restaurants I wanted to try in Disney ever since it was announced.  It sounded like it had a really cool theme and atmosphere, the food looked good, and the cocktails looked awesome. My friends expressed a similar interest, so when it came to planning our 2018 girls trip this was one of the only table service meals we booked!

And our experience at The Edison was certainly interesting.  I’ll get into the details later on in the blog post, but I’ll say this – the food was really good, the service was incredibly slow, and they went above and beyond to make up for that.  Overall what could have been a frustrating dinner still turned out to be a positive experience. 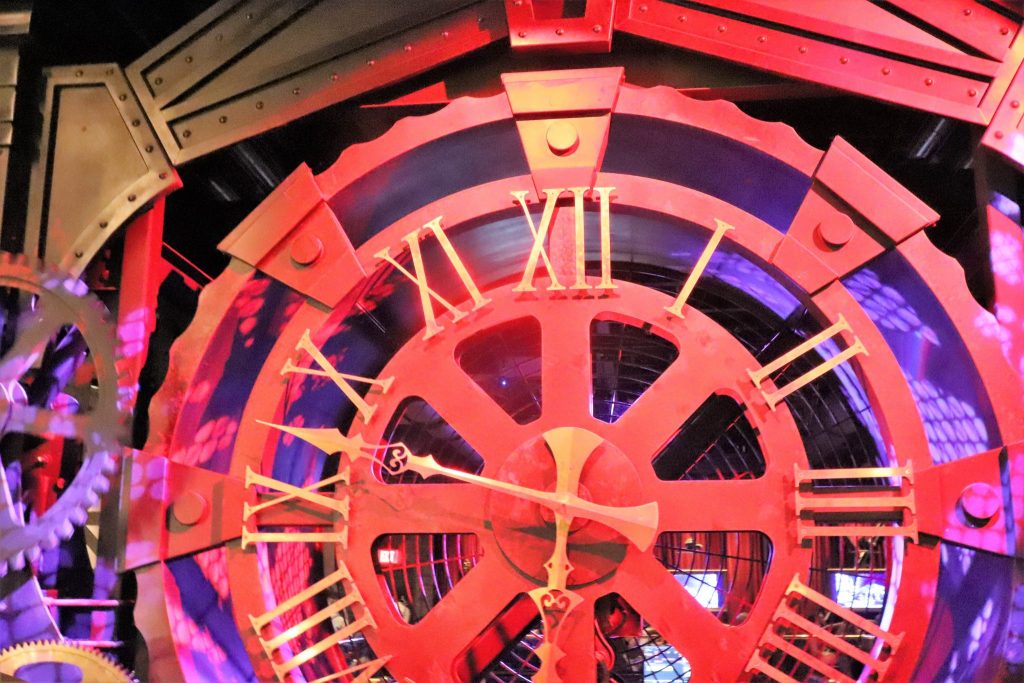 The best way I can think of to describe The Edison is 1920’s Steampunk. When you walk into the restaurant you are greeted by a giant clock that’s part of a series of gears. There are tons of details throughout the restaurant (we didn’t even get to see them all). The area we were seated in had a number of screens that were showing old film clips. A lot of them were… quite odd.  We saw a lot of dancing chickens. It was entertaining though!

Our server (I believe his name was Tony, and I made a point to try and remember his name because he deserves recognition) greeted us and got us started with drinks.  They have a number of signature cocktails, many of which are inspired by the 1920’s, so you’ll see a heavy influence of gin and rum. I went with A Hand in Thyme (nolet’s gin, blueberry cordial, lemon juice, green chartreuse, thyme): 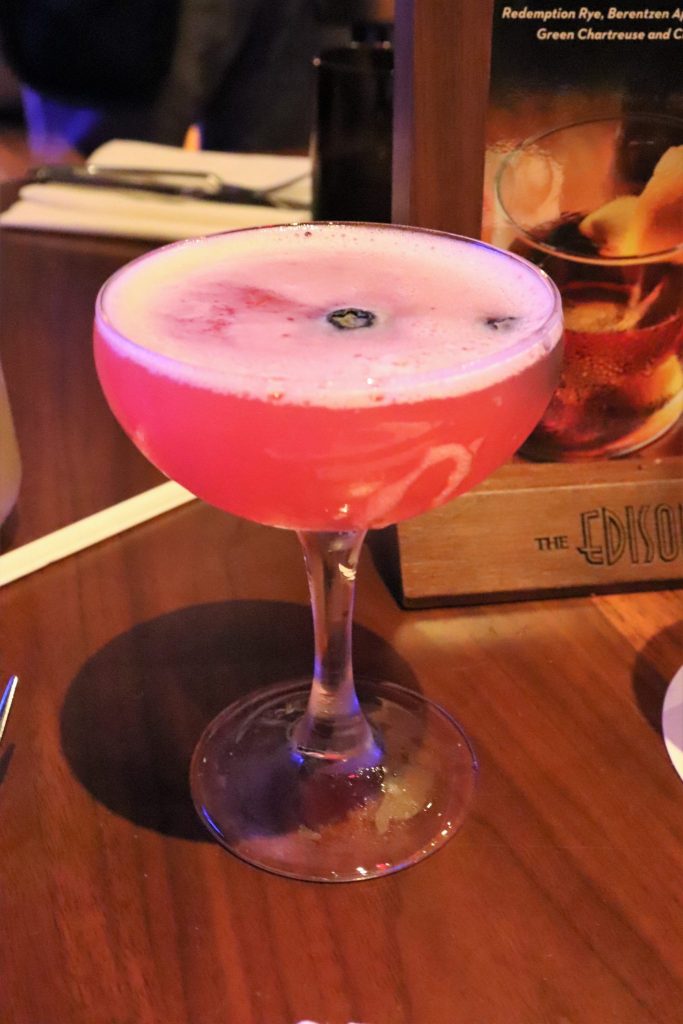 As a blueberry lover, I really enjoyed this.  These aren’t cocktails that pack a punch, but rather complement the meal. We sipped slowly because they are $14 each.

One of my friends had The Green Electron (tart and smooth concoction of tito’s vodka, fresh lemon juice, homemade honey and refreshing green tea all poured into one): 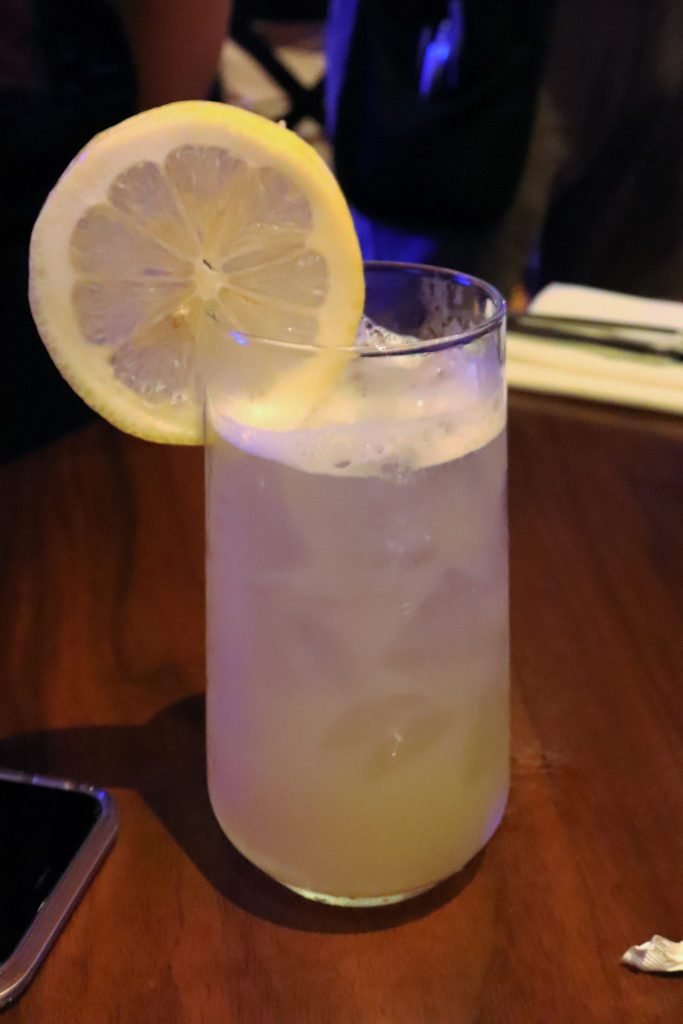 This came highly recommended by our server when she was torn between several different cocktails. It’s a bigger serving than my teeny cocktail which I think ultimately won her over. It was tasty and refreshing.

My other friend had the Samantha Sterling (the perfect combination of watermelon and cinnamon cordials along with grey goose vodka, lillet rose and fresh lime juice, proves to be just as adventurous as the club that was here before us): 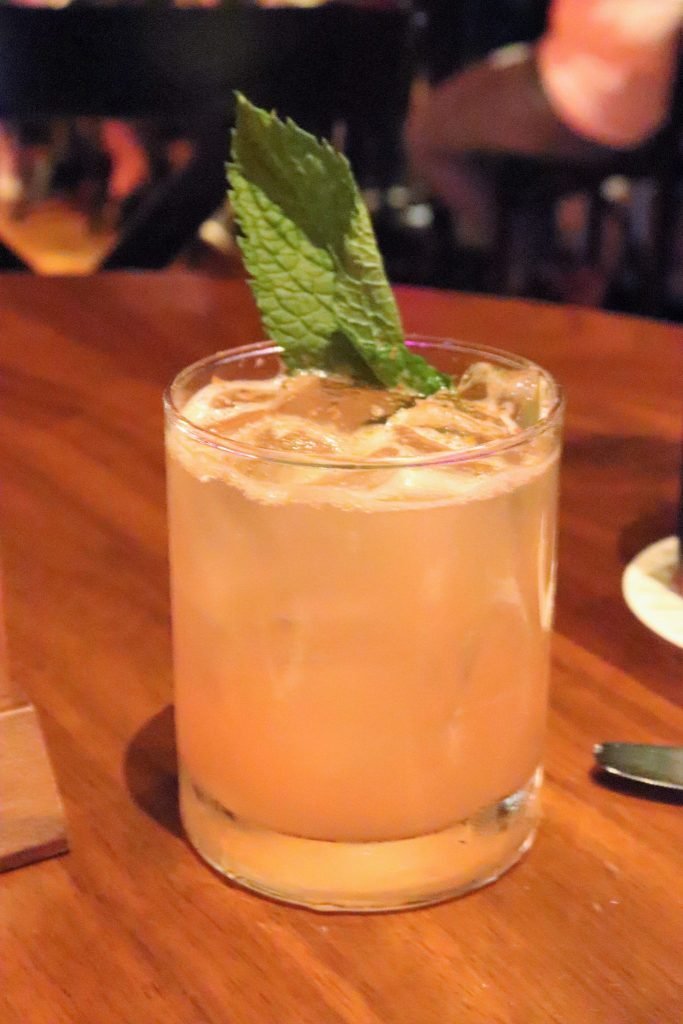 I really liked the sip I had of this one – it might have been my favorite of all three cocktails.  My friend had been a huge fan of the Adventurer’s Club, and this cocktail is named after one of the characters in that, because the space where the Edison is located used to be the Adventurer’s Club.

For food we decided to order one appetizer to share and then entrees. Our appetizer was the Electri-Fries (L. Burbank hand cut potatoes, ‘Edison Special Sauce’, bacon, grated parmesan cheese, chopped green onion): 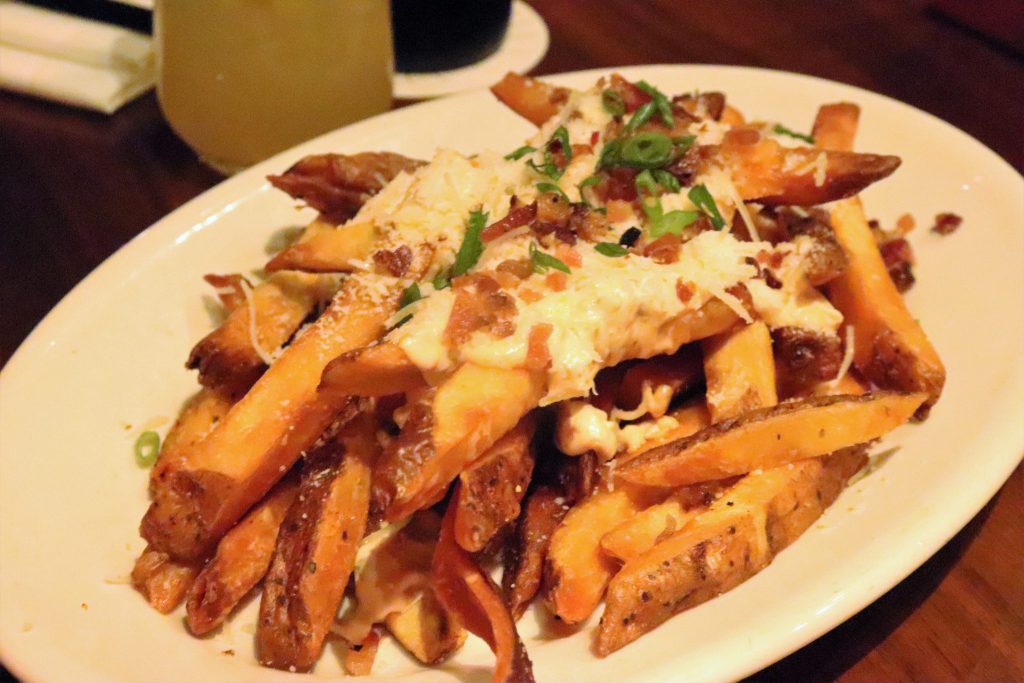 These were delicious and great for sharing! The fries themselves were excellent even without toppings – they were big, meaty fries that were nice and crispy.  The toppings just made them even better. I’m not sure what the special sauce actually is, but it was a winner.  Add some bacon and cheese and you can’t go wrong.

After we devoured these fries is when our problems started. After the fries were gone we probably waited about 45 minutes with no sign of entrees. Our server had stopped by once or twice to assure us the kitchen was working on it, and they were just busy because it was 7pm on a Saturday night. After that 45 minutes had passed he stopped by again to apologize for the wait and said he was getting us a free order of the candy bacon to eat in the meantime since it was taking so long. 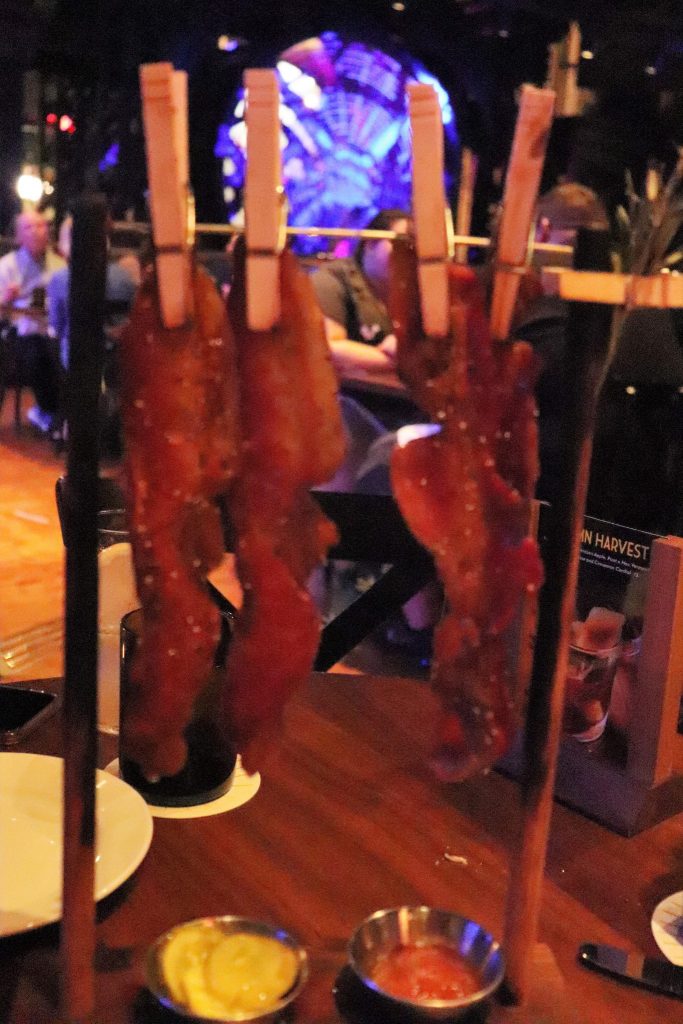 This has been a pretty popular appetizer due to the fun appearance and the fact that it’s candied bacon, so you may have seen it on instagram or other reviews of The Edison.  (My photo is not instagram worthy, given the fact that we were basically waiting to devour the bacon since we were so hungry! Gotta take that photo fast!).  The bacon itself was really excellent. The flavor on it was amazing, and the dipping sauces were interesting to try. That being said, the reason why we didn’t order it in the first place and probably wouldn’t again is because it’s $15.  And 4 slices of bacon. You’re paying almost $4 per slice at that point and it is very hard for me to justify that. So I’m kind of glad our entrees were slow so we got to try it!

And then our entrees arrived!… but not without flaws, unfortunately. It was probably about 8:30 by this point with a 7pm reservation (and I think we were seated early around 6:50). My friend had ordered the Buffalo Chicken sandwich, but asked for it with ranch instead of bleu cheese and subbed mac and cheese instead of fries. They brought it without the ranch and with fries.  Luckily he was able to quickly grab a side of ranch, and got working on the mac and cheese. 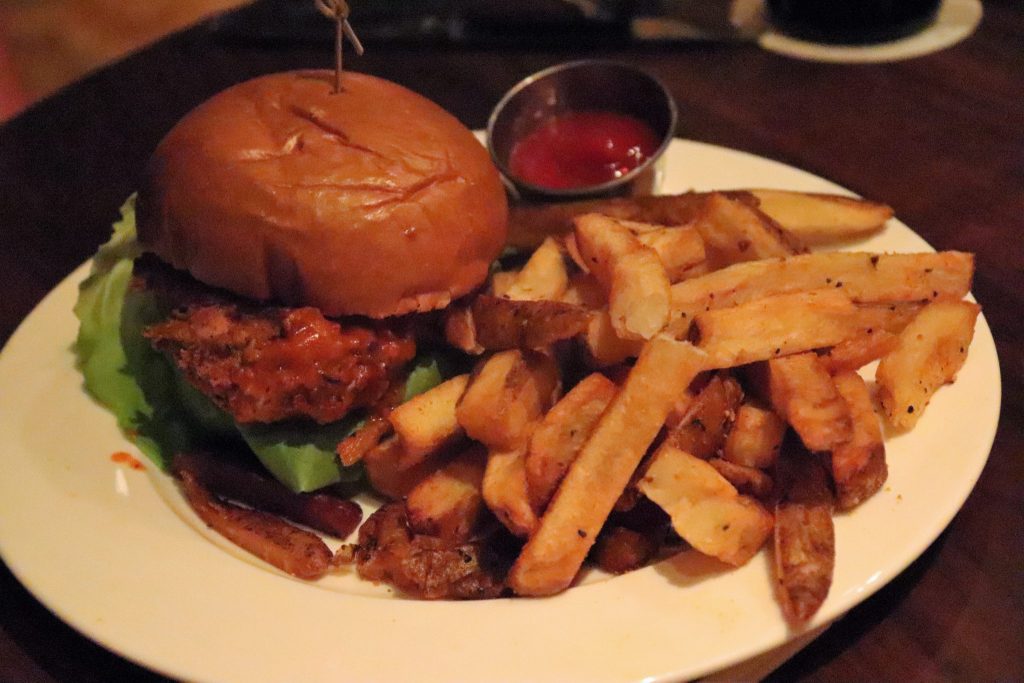 I tried a bite of the sandwich and it was really good. I feel like they must make their own buffalo sauce, or at least use something different than the typical buffalo I’ve had most places because the sauce felt a little more complex and flavorful. And the fries were very good since they were the same fries used in our appetizer (though no one really touched them since we had so much other food).

I had the Fish Tacos (four corn tortillas filled with a light cabbage and pepper slaw finished with honey lime vinaigrette and grilled mahi mahi topped with crema and cilantro, with housemade tortilla chips and salsa): 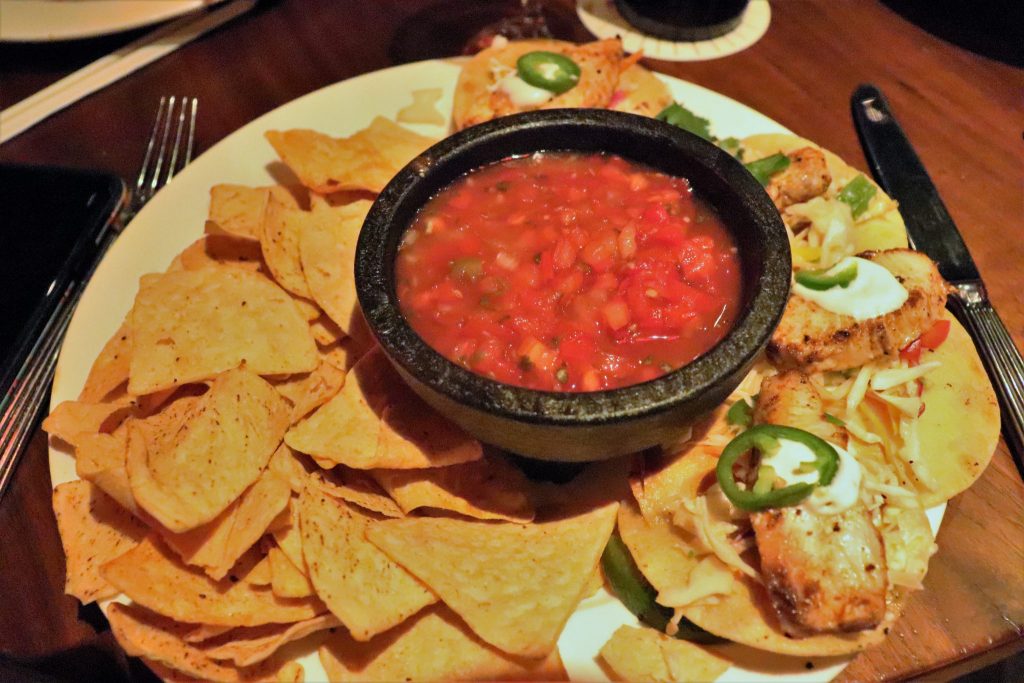 I’d wanted something a little lighter for this meal that was still filling, and this did the trick perfectly.  The fish itself was pretty good, but the crema and added spice from the jalapeno made them really good. It came with a whole slew of tortilla chips and salsa, which I boxed up and enjoyed the following evening when we had some downtime in our hotel room. 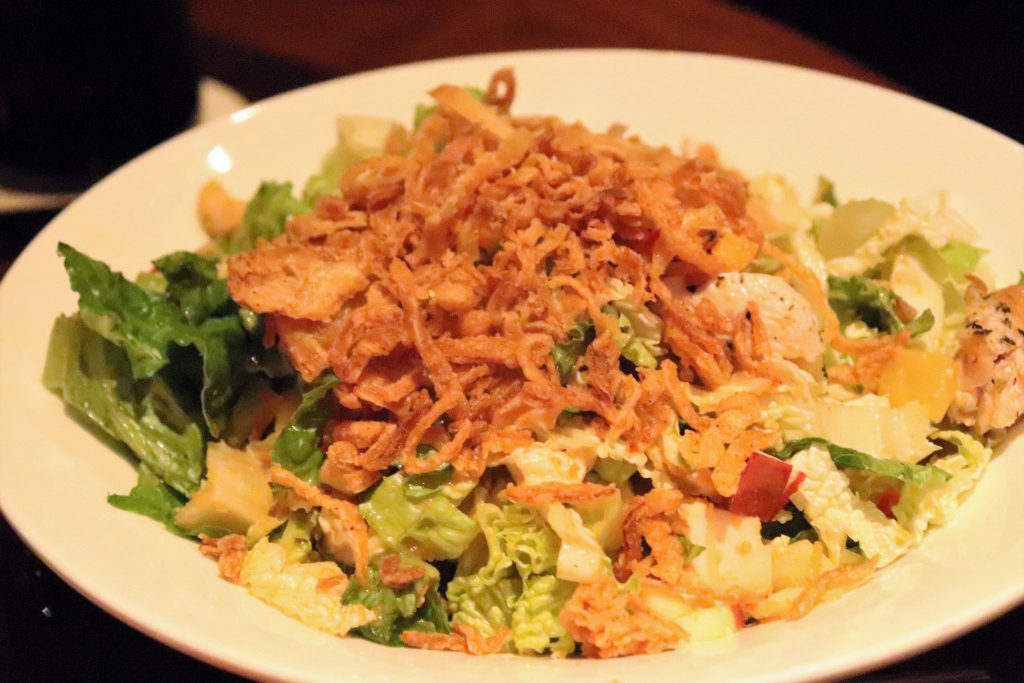 She wasn’t feeling well so she only had a few bites of it, but she said it was really good and would highly recommend it to others looking for a good salad.

They also brought us the mac and cheese, and because of the delay they gave us the full side portion (for sharing) rather than the smaller portion that would have come with just the meal. So two of us also dug into the Menlo Park Mac and Cheese (our signature blend of fontina, muenster, cheddar, and alpine swiss with cavatappi pasta topped with seasoned panko crumbs): 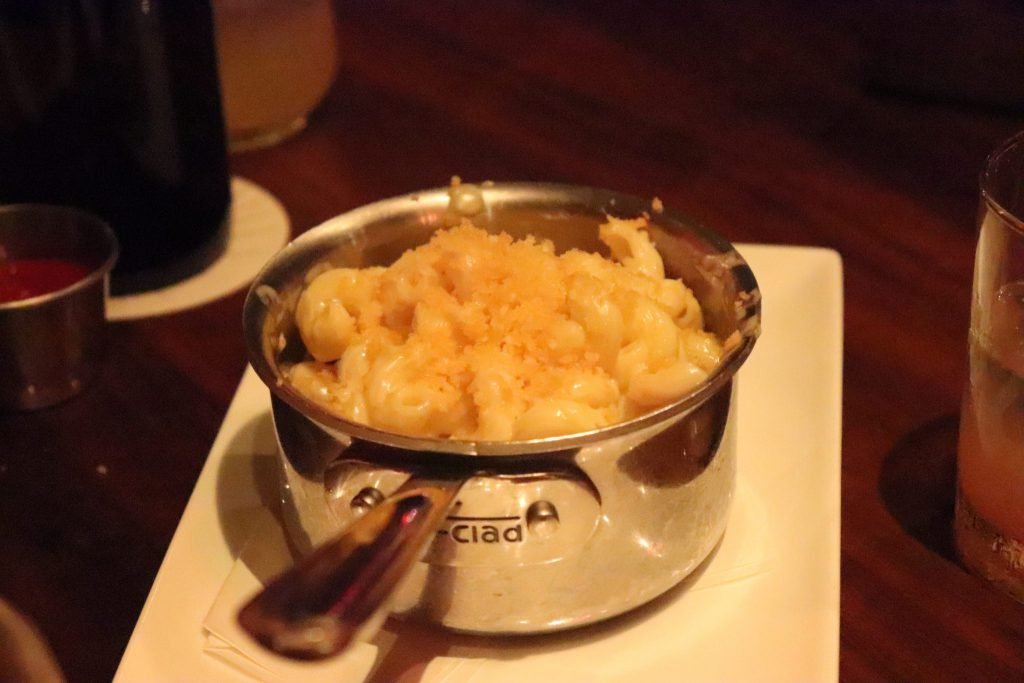 I’m a huge fan of mac and cheese, and this one was really excellent. I would 100% order it again if I ate here, either as the full side to share with others or in place of whatever dish’s side I was ordering (they do charge a couple of extra dollars upcharge to do that).

Although it took a very long time for us to get our food, our server at The Edison went above and beyond making up for it. We got both the bacon and the full size mac and cheese free of charge, and he also comped the Buffalo Chicken sandwich meal.  We didn’t ask for anything but he felt the need to do it and that made a huge impression on me!  All of the food we tried was delicious – much better than I was even expecting – and the cocktails were good too. I definitely would make a point to come back here again!

Have you been to The Edison? What would you be most interested in trying?