You are here: Home / Disney World / Dining at the Skipper Canteen 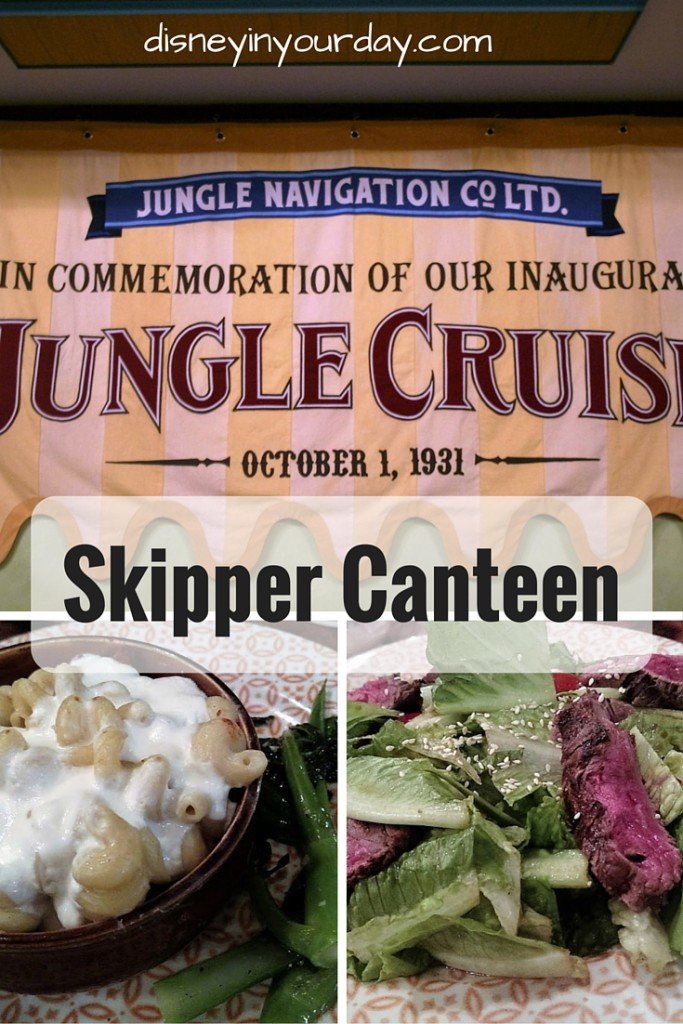 The newest restaurant in the Magic Kingdom, the Skipper Canteen opened back in December and I was lucky enough to give it a try when I was there in February!  It’s a table service restaurant located in Adventureland with a Jungle Cruise theme.  It’s been getting mixed reviews from people, mostly due to the fact that the food is more exotic than most theme park offerings, and the fact that you can’t make an advance dining reservation for it (same day reservations are available, but you can’t do the usual 180 days out here like you can at other places – at least, not yet). 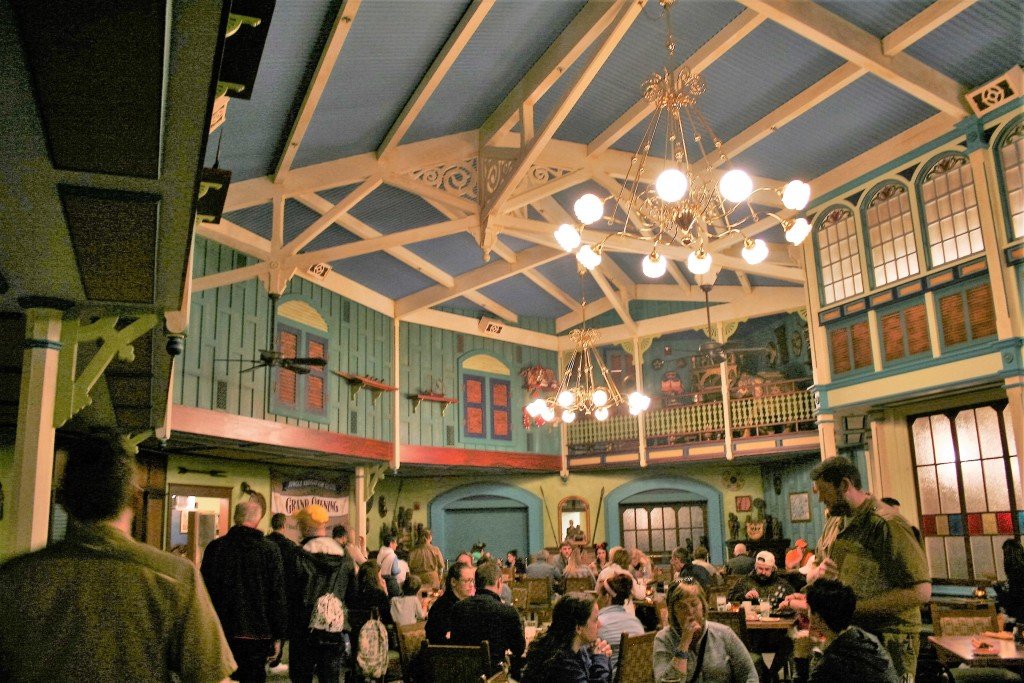 Personally, I was excited about the more “exotic flavors” on the menu here – I love anything new and interesting!  I made a reservation in the morning that day for dinner in the evening, and we checked in and waited a little bit to be seated.  Our host who seated us was absolutely hilarious!  He really go into the act, making Jason button up all the buttons on the shirt because they let him in, and joking that we would leave Jason outside and that he and I would have dinner together.  He had us laughing the entire time and it was a little disappointing that he wouldn’t be our server for the night!  Our actual server was fine, very good at what he was doing but not particularly invested in the humor aspect of it. 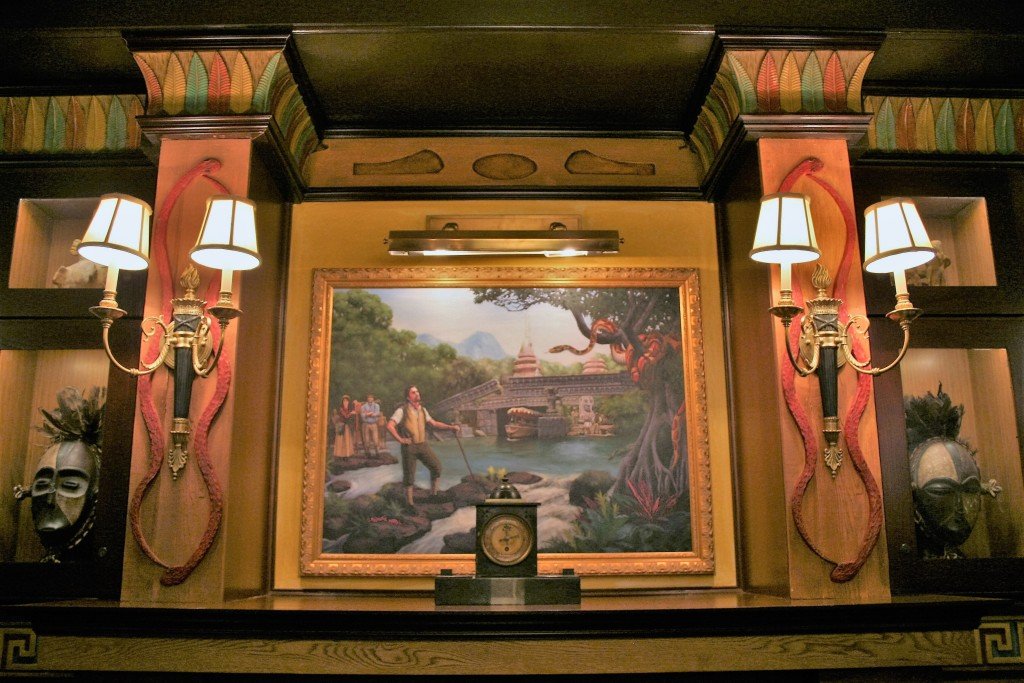 The meal started with some bread, which was really excellent – I think it must have had some sort of spices in it.  They served it with honey rather than oil or butter, which I personally loved.  And being a blogger and all of course I had to snap a picture of the bread.  At which point our host from earlier happened to be walking by and said to me, “excuse me, you do know you’re taking a picture of… bread, right?” to which I replied yes, and he said, “Okay, just checking!” 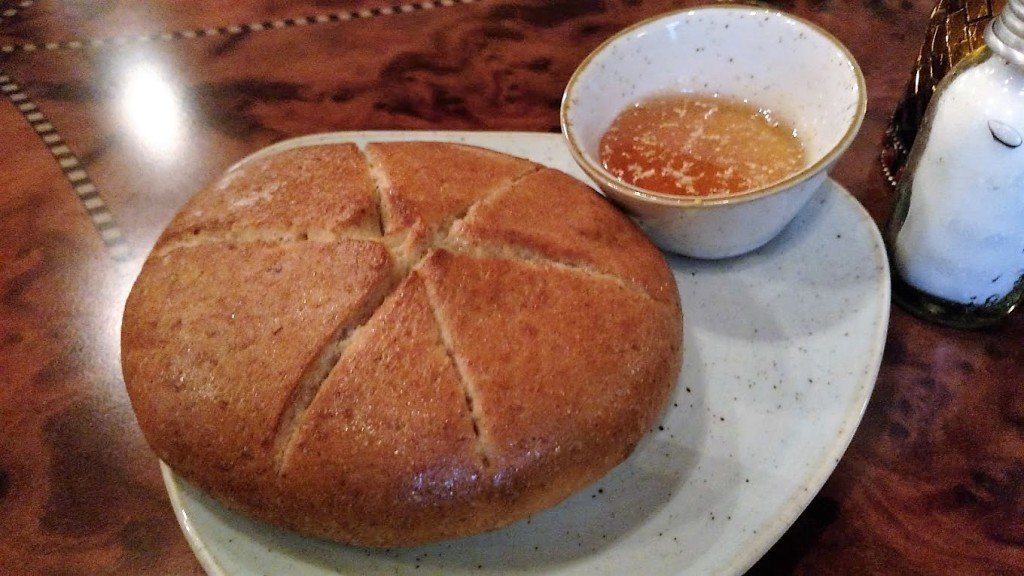 For drinks I just had an unsweetened iced tea – I stick to tea or water the night before a race and I was running the Enchanted 10k the next morning.  Jason however got one of the specialty sodas – he had the melon fanta.  It was sweet and he loved it.  Plus the thing I thought was cool was that it cost the same as a regular soda and had free refills!  I thought being a specialty item it might be more expensive but I was pleasantly surprised to see that it wasn’t! 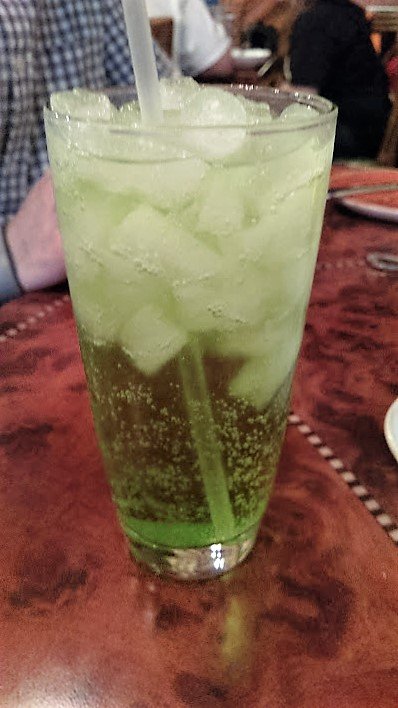 We decided to order an appetizer to start.  Our server highly recommended the house made arepas (slow cooked beef, black beans, tomatoes and queso fresco).  I didn’t know what arepas was, but we figured everything in it sounded good so let’s try it! 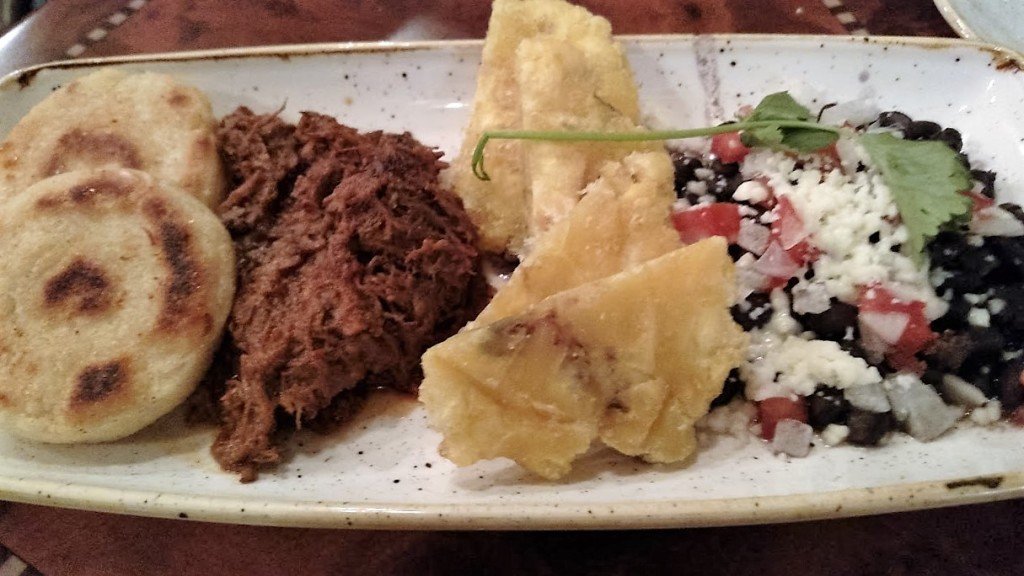 I’m so glad we took his suggestion because this was absolutely delicious!  The components came separately, and I wasn’t quite sure how to compile them or how to “correctly” eat it, but I don’t think it mattered because however we put it together it tasted amazing.  Definitely the best thing we ate here and something we would order again if we came back.

For his meal Jason had the “A lot of Steak” salad (Thai-marinated Flank Stead tossed with Hearts of Romaine, carrots, red peppers, cucumbers, red onions, cherry tomatoes and Asian dressing). 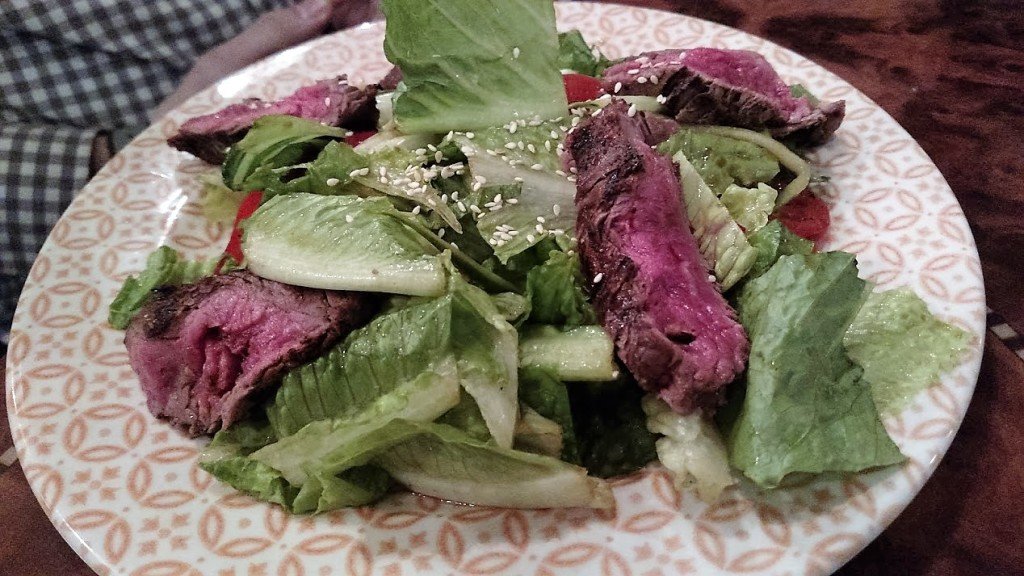 Jason really enjoys a steak salad so he almost always gets it if he sees it on the menu.  He said this was very good and had a bit of spiciness to it that he liked.  However he wanted to point out that he felt the real highlight of Skipper Canteen was the atmosphere and cast members like our host, and things like the “great wall of China.”  (Which our host made us ooh and aah over – literally a wall filled with china plates 😉 )

Because I needed to carb up before the race, and because I’m just a sucker for mac and cheese in general, I got Skip’s mac and cheese (A typical Egyptian dish consisting of Spiced Ground Beef, pasta and Bechamal sauce served with broccolini). 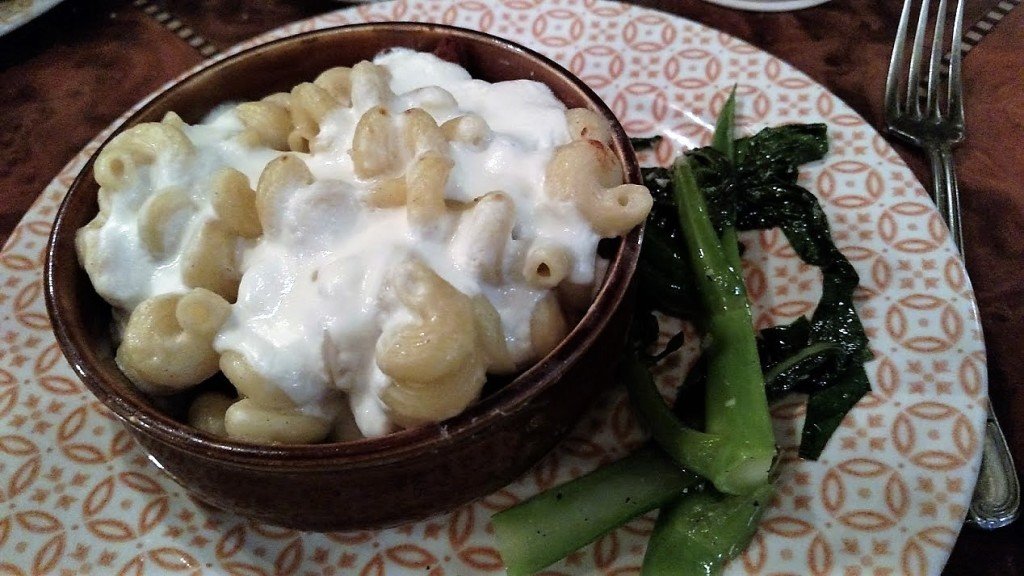 This dish was quite tasty, though I will say it wasn’t exactly what I was expecting.  I had a lot of the ground beef in it, so once you got past the top layer it was really more like pasta in a meat sauce than actual mac and cheese – I had trouble tasting a lot of the cheese.  It was still very tasty, I just wanted more cheese flavor myself. 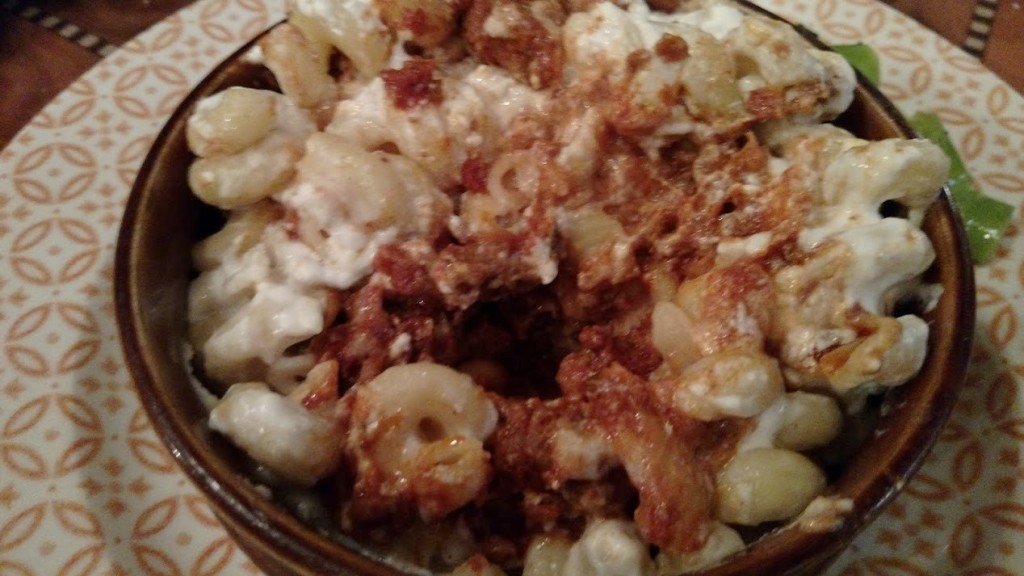 We didn’t have any room left for dessert so we passed on that.  On the way out we stopped to take in some of the details.  Make sure you check out the bulletin board with notices for the “skippers” – it has lots of funny things on it!  Here’s my favorite: 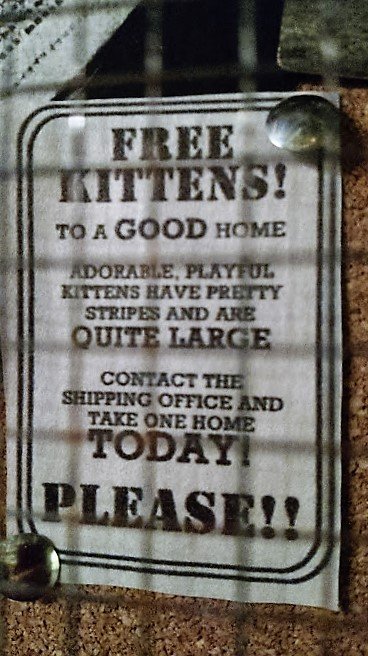 Overall we really enjoyed our experience here and would love to come back – there are plenty of other things on the menu we’d like to try, and it’s great to have another table service option in the Magic Kingdom!