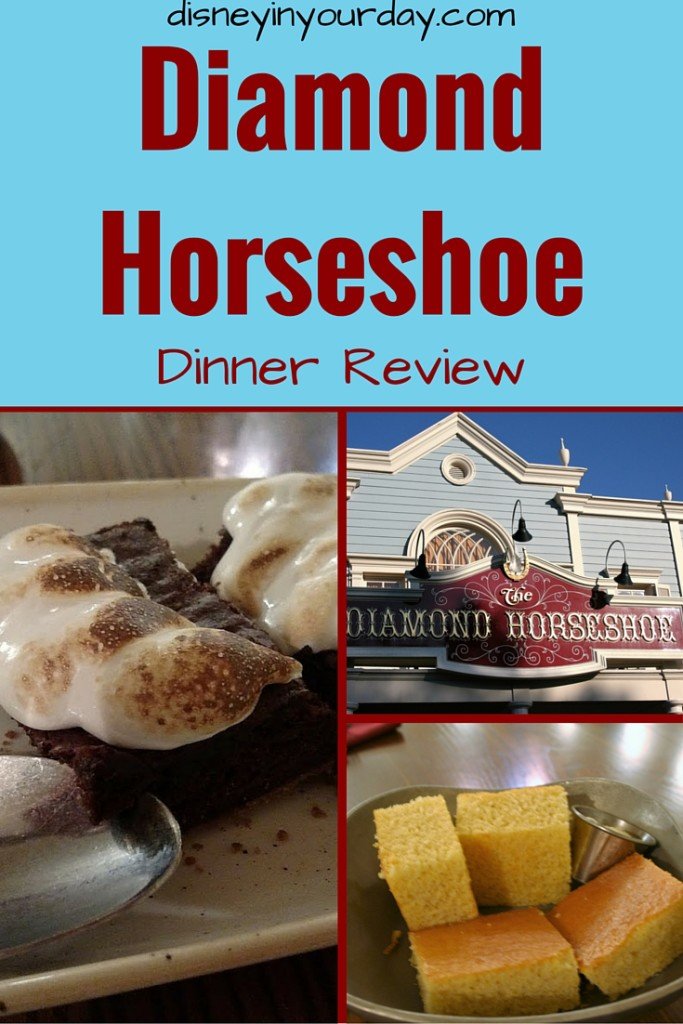 I try to stay mostly positive about things before I experience them, despite what I might have heard.  That being said, I couldn’t help but feel a little bit nervous going into my dinner at the Diamond Horseshoe at Magic Kingdom.  Most of the reviews I’d read were pretty darn bad, and since I had invited a friend along I didn’t want the food to be horrible! 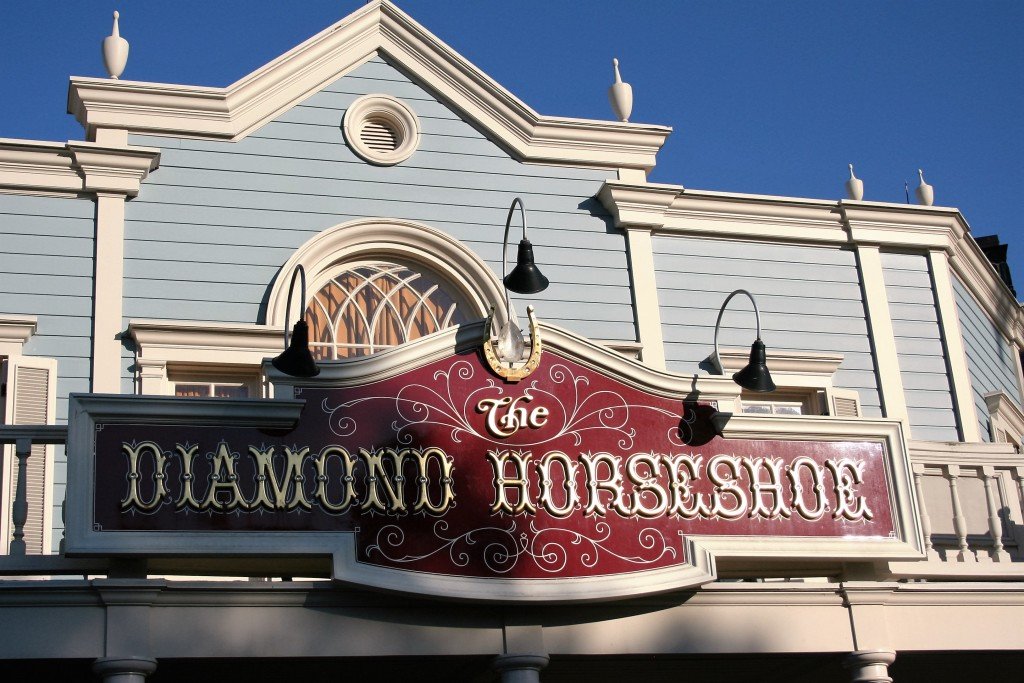 Moral of the story: don’t trust what other people say!  We had a good meal.  I’ll get into more detail in a bit, but while it didn’t blow me away or anything, it certainly wasn’t as bad as I had heard.  I think a lot of people tend to be overly critical or have higher expectations than me, but we had a good time.  I met up with my friend Andrea, who blogs over at Once upon a Run.  It was really great catching up, and we talked a lot about RunDisney (since she is obviously a runner too!), and she told me about her experiences running the Disney World marathon, since I’ll be doing it for the first time in January. 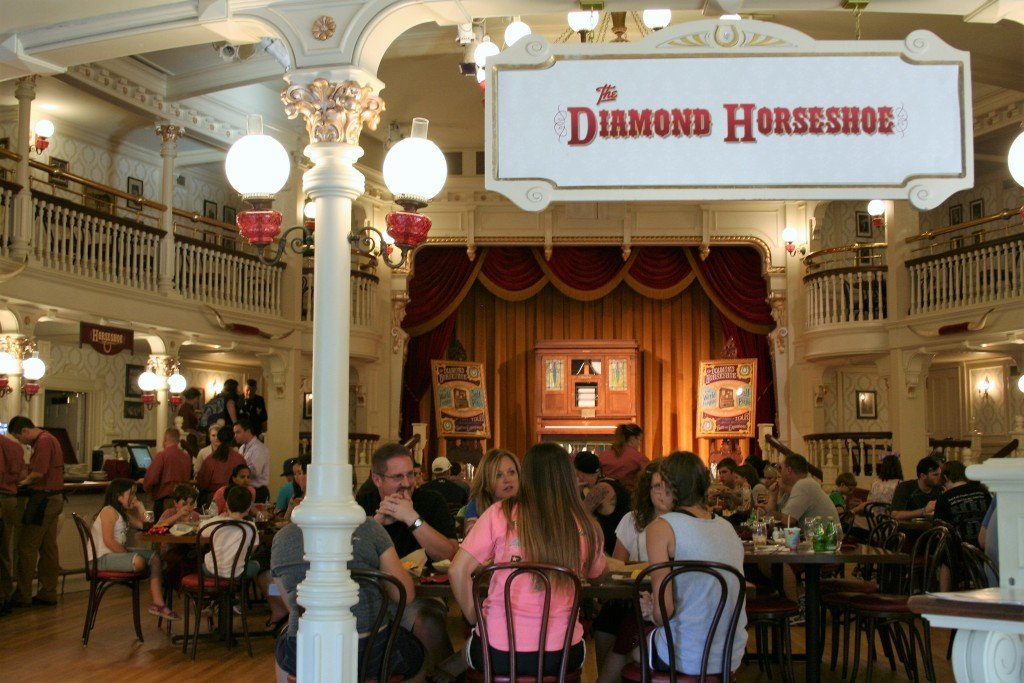 It was pretty neat to actually be eating inside the restaurant, as it previously wasn’t open very open.  They said it was open “seasonally,” but the only time I ever saw the inside of it was for dance parties during the Halloween or Christmas celebrations.  There is a stage in the room because there used to be a show performed.  Now it has a “self playing piano” that does a little song every 15 minutes or so.  We were seated in a higher up area right next to the stage.  It was nice because we had our own little corner. 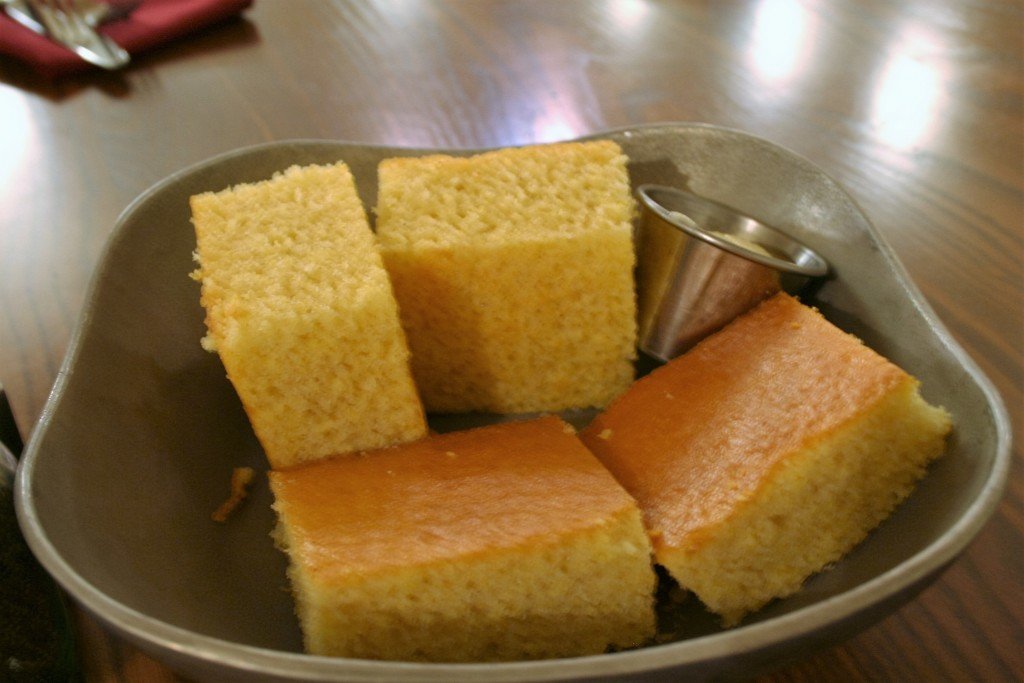 Everything was served family style and you could ask for more of anything.  Soft drinks were also included in the cost.  To start the meal they brought us salad and cornbread.  The salad was pretty basic.  I think it had some sort of ranch dressing which isn’t my favorite, so I didn’t eat too much of it.  I really liked the cornbread though and especially the honey butter that was served with it. 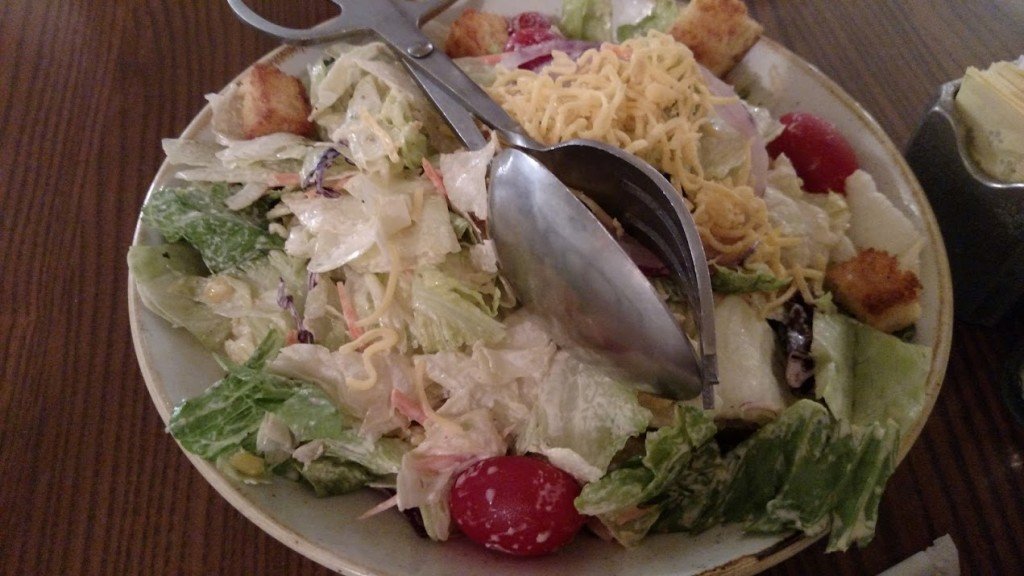 Then for the main meal they brought a big plate with the meats and another plate with sides.  The first plate had baked beans in the center and was surrounded by turkey, pulled pork, sausage, and braised beef.  I don’t really care for braised items so I didn’t touch the beef, but the others were all good.  The pulled pork was my favorite, as it had a lot of nice flavors to it. 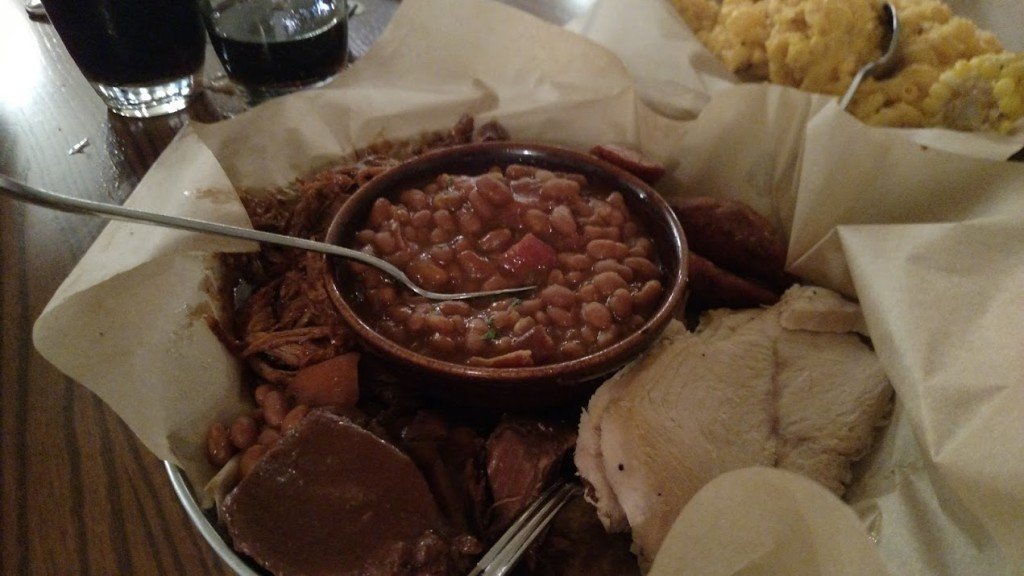 The side dish had macaroni and cheese and corn on the cob.  The corn was good, your typical corn on the cob.  The mac and cheese was a bit of a disappointment.  Mac and cheese is one of my favorite things ever, and I liked the flavor on this one a lot – but it was only lukewarm.  Definitely a dish that needed to be hot.  We could have sent it back but honestly we’d had so much food by that point that I couldn’t eat much more anyway, so I didn’t see the point. 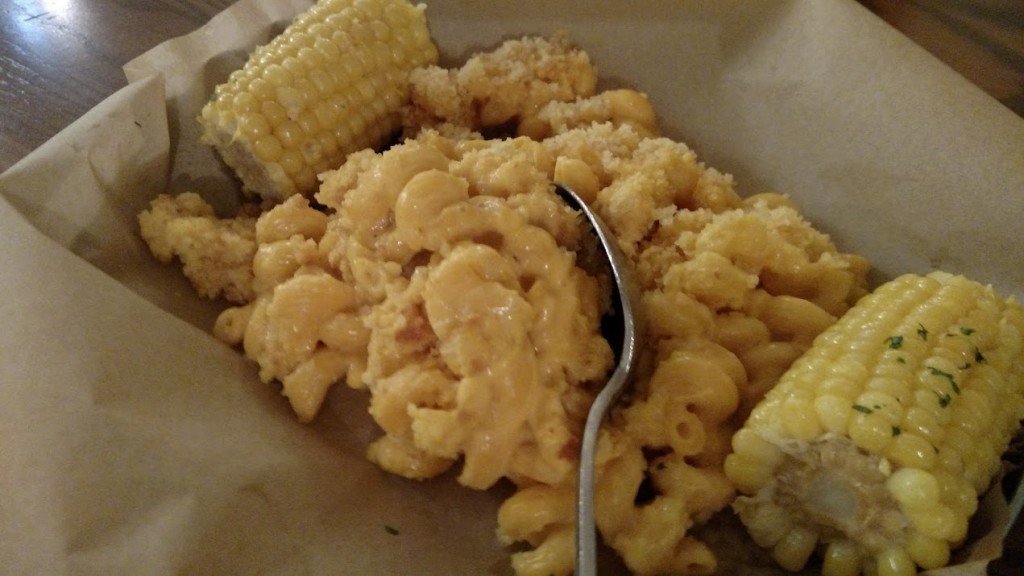 Dessert was probably my favorite part of the meal.  They brought us a plate of brownies with a toasted marshmallow topping.  I’d read reviews that said the brownies were really hard, but ours were very moist and delicious, and perfect with the marshmallow.  Honestly I’m still thinking about that brownie and wishing it was at a snack stand somewhere in Disney so I could easily pick up another one. 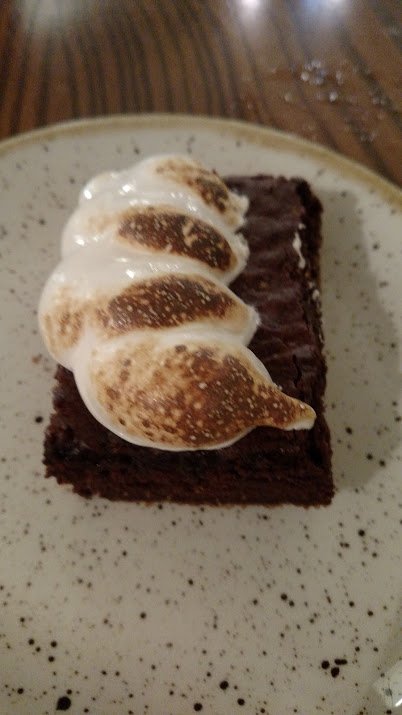 Overall dinner was good but not great.  It sounds like maybe the place can be hit or miss depending on the night with how things are prepared, so I hope they get more consistent with it.  I think the venue itself is a cool place and I like the fact that it’s open.  For me personally I wouldn’t go back because I’m not a huge fan of that type of food, but I since it was new I wanted to try it.  I do think it’s a little overpriced at about $35 per person for the quality of what you get, but if you have big eaters in your group then you might find more value in it.

Would you be interested in trying the food here?