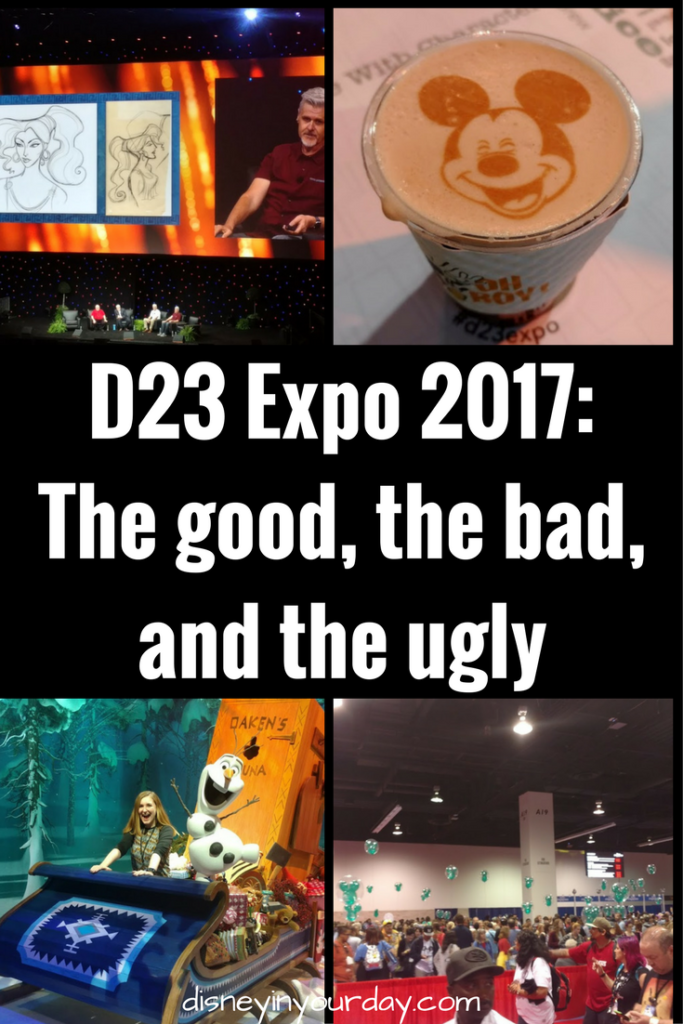 Last week I got to attend the D23 Expo.  It was the 5th expo that Disney has held, and it has a ton of panels where they release big news and have celebrities, shops with exclusive merchandise to buy, fun activities, and other various convention type things.  I was both excited and nervous about being there, because I’d heard it could be a bit of an overwhelming experience.  And it’s true.  I’m not sure I’ve ever done something that I had as mixed feelings about as the D23 Expo.  There were things that I loved and situations that were awful.  So I figured that I would put it all into one post here to share my feelings and impressions of the experience.  Because it was truly that – an experience. 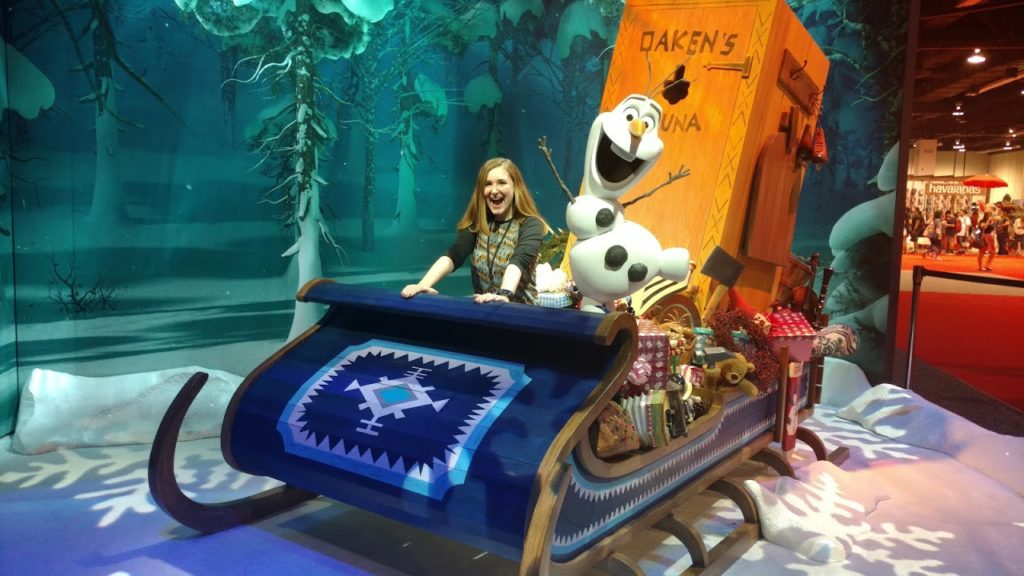 Being on the show floor of the D23 Expo felt so exciting.  There were tons of neat things to look at.  They had a bunch of fun photo opp areas set up, so you could take pictures on Olaf’s sled, on Moana’s boat, with a big Baymax, etc.  And the expo guests themselves were something to look at!  There were incredible cosplays and costumes, as well as clever and more subtle Disney Bounds.  I got a bunch of photos and want to share a whole post later on of some of the fun cosplays and outfits that I saw. 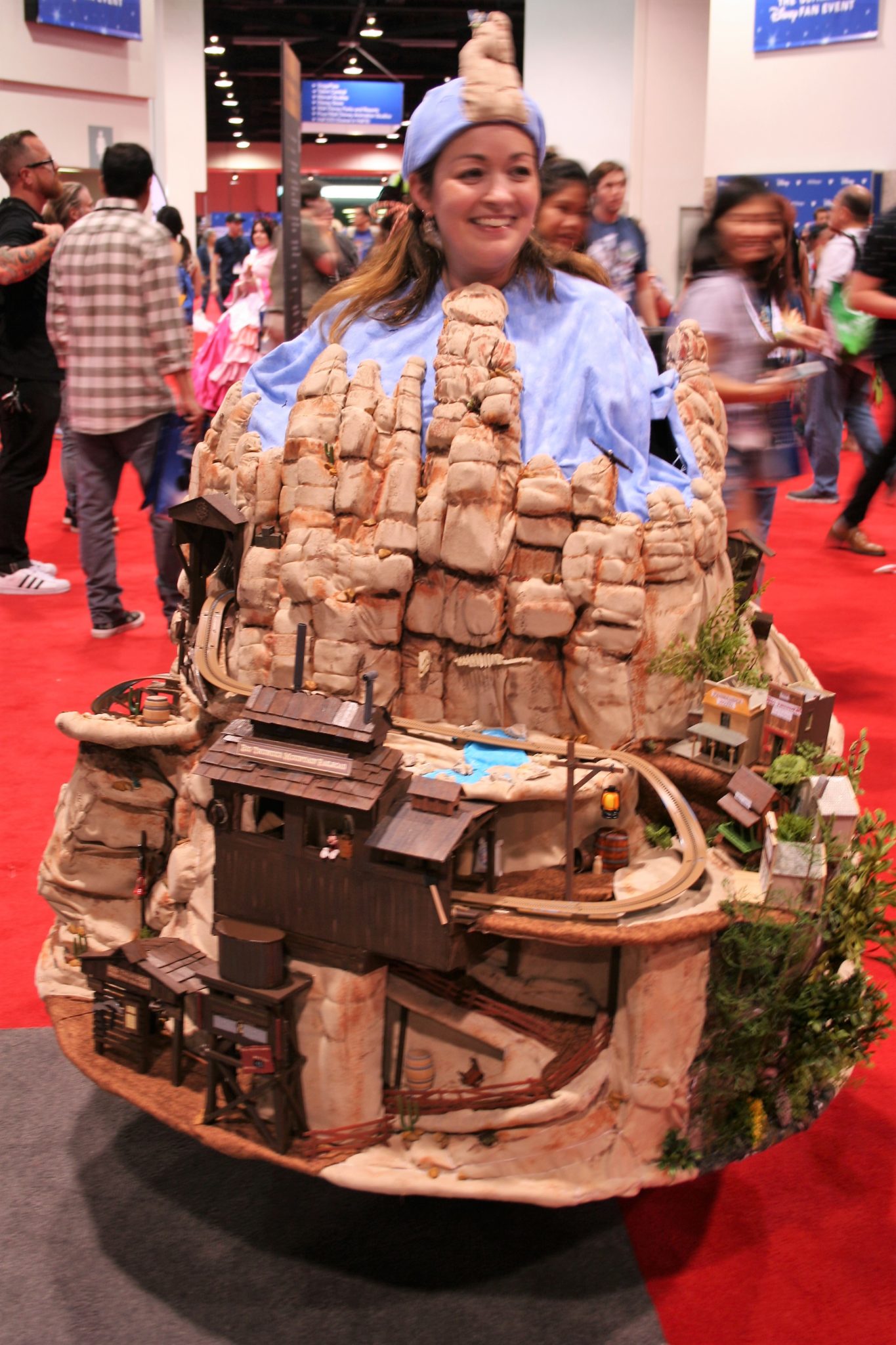 There were also fun smaller things to see at the expo.  You could wait in line for a cup of coffee (free) that they printed a Disney picture on.  I did it twice and only waited about 15 minutes both times.  The Lularoe booth got crazy when there was a leggings giveaway (I didn’t get any), but when they weren’t giving away anything it was fun to go look at all of the new Disney patterns coming out soon, like the Muppets and Toy Story!  And there was a pirates display that detailed the history of pirates in the Disney company with lots of artifacts, original props, etc.  That line did sometimes get long, but I waited about 40 minutes which was well worth it. 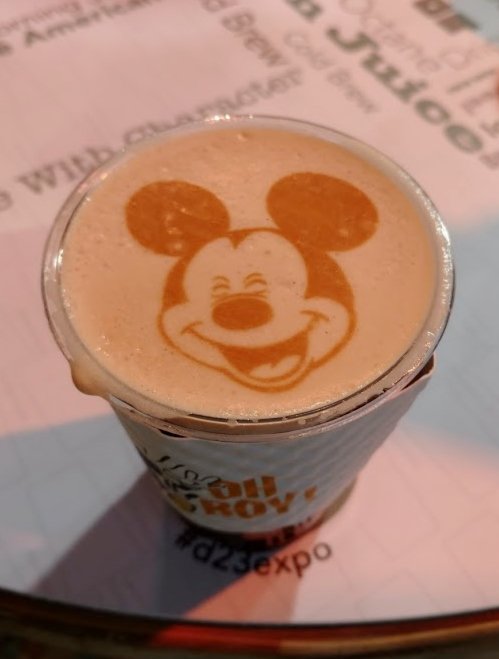 And aside from the major panels held in the big hall, there were some smaller events that were super interesting. I attended The Power of the Princess, which had 4 of the voice actresses of the princesses (Belle, Ariel, Moana, and Tiana).  That was fascinating and empowering and I’ll have a blog post on it.  I also attended the Celebration of the Lion King and Zero to Hero: the Making of Hercules.  Both of these events shared some fun facts and information about the films and had a number of the people involved on stage.  At the Lion King the original singer of the Circle of Life performed the number with a full gospel choir, and at the Hercules panel Susan Egan sang “I Won’t Say I’m in Love” live. 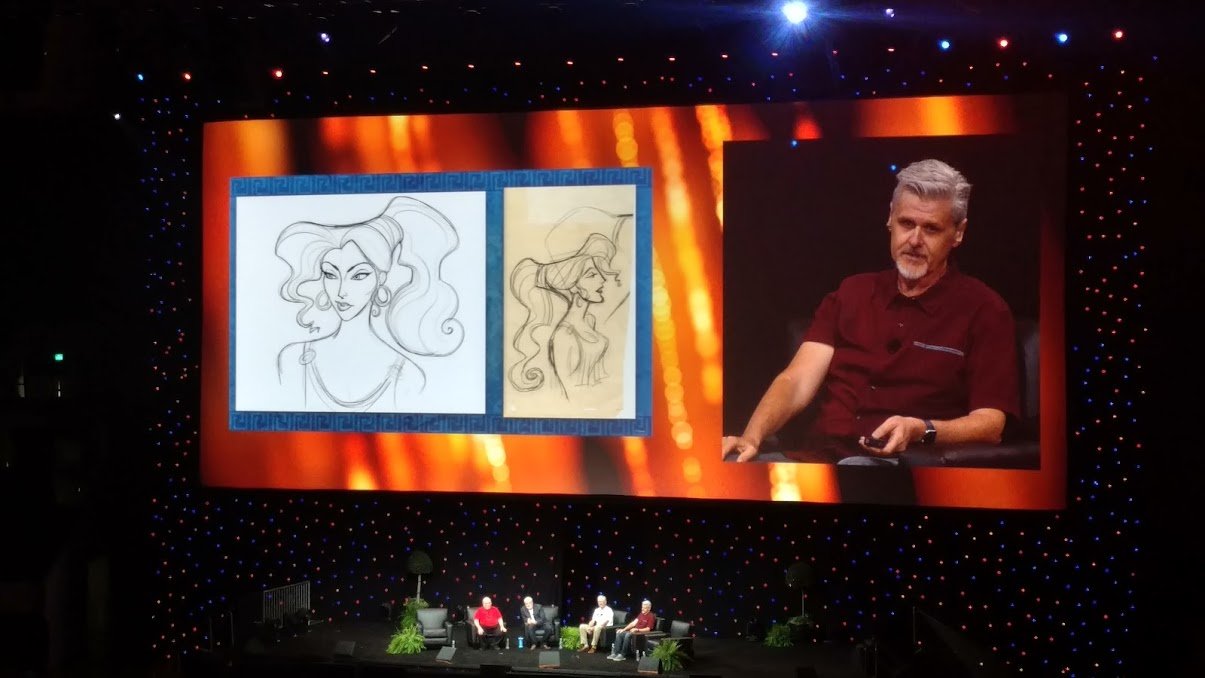 I went to one “main” panel, and that was the parks panel.  It was exciting to be in the room and get all of that news first.  Though I will say that it’s pretty much all online almost instantly.  I live tweeted the whole thing so that my followers and friends could get the info right away straight from me.  It was thrilling to get so much information so quickly in a room full of people as excited as I was.  They also gave us a couple of gifts at the panel, including a pin and a pass for reserved seating to Fantasmic! The show didn’t officially open until Monday but they were doing a soft opening Saturday and Sunday and we got to see it.

So for the purposes of this post, the difference between “bad” and “ugly” is this: bad is stuff that kinda comes with the territory of the convention, but still affects my enjoyment.  I’m not saying it can, or should, be any different, but it impacts me personally.  And will determine if I feel the experience is “worth it.”  So the biggest “bad” is that there are lines everywhere, for everything.  I expected lines.  I expected them for the big panels.  I got to the expo the first day 4 hours early just to get in.  I knew I’d be on lines.  I got to the main panel 3 hours early.  I brought a book, I was prepared.  I knew the stores had lines.  I didn’t expect such super long lines for absolutely everything.  Anything you wanted to do, you had to wait in a long line for.  See the displays of the Pirates of the Caribbean merchandise, the model of the new Star Wars land, getting a cup of coffee. 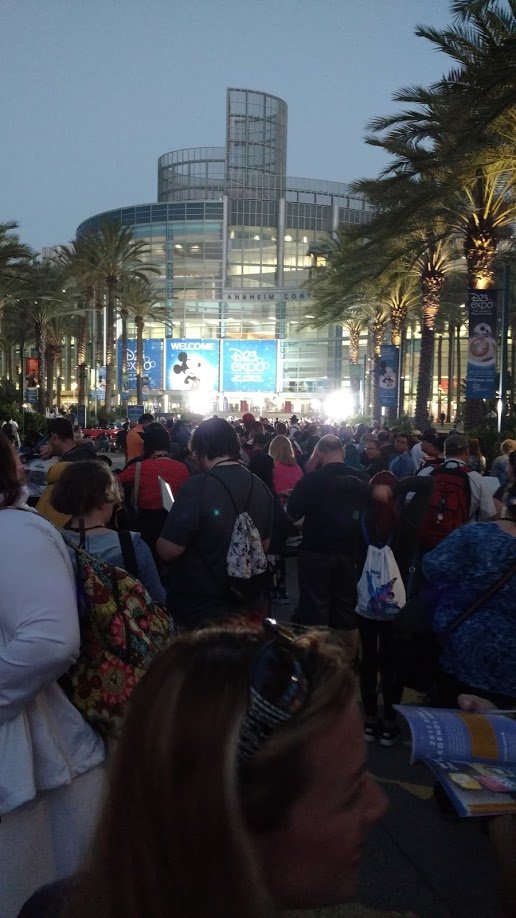 Wait to get into the convention center.

So yes, it just comes with the territory.  But it definitely wore on my nerves, especially given the catastrophe I experienced at the animation panel.  It might have been better if I had convinced Jason to come with me – at least I would have had company on the lines!  But by myself, all of the waiting (even prepared with lots of activities) started to take its toll on me.

And the anxiety that this atmosphere causes wasn’t ideal.  Every time I was thinking about waiting for one thing, it made me wonder if I should be waiting for something more important.  If I wait on line for 20 minutes to see the Star Wars model, that’s 20 extra minutes I could be sitting on the floor waiting for the animation panel.  I just felt like I was constantly worrying about what was coming next and what else I needed to wait for, rather than enjoying what I was doing. 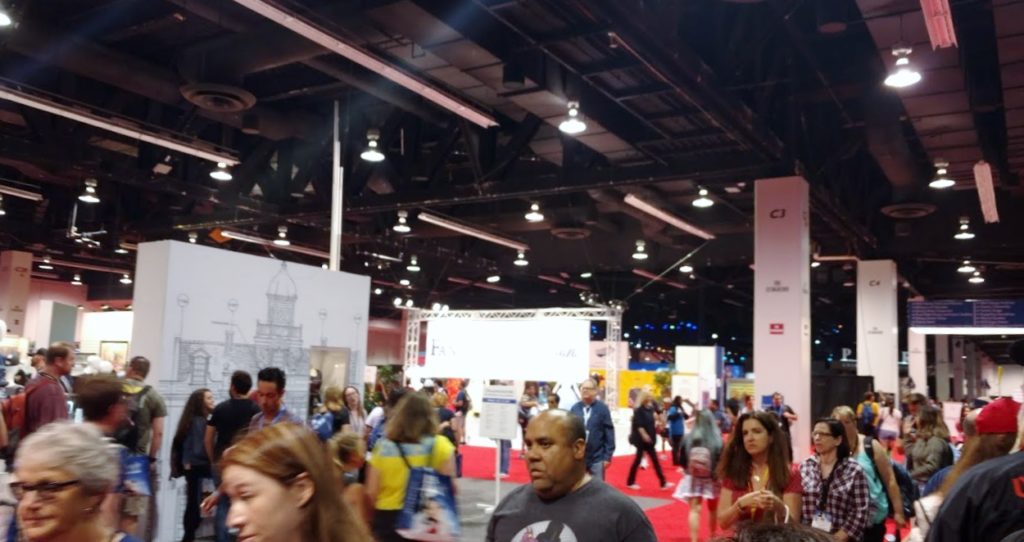 Disney was not always the most organized or good with communication about what was happening either.  To jump in the DuckTales money bin they switched to a wristband system but didn’t really make that public knowledge.  I went there first thing on Sunday morning and by 9:20 they weren’t letting any more people in for the day.  So I totally missed out on that.

The disorganization was the worst.  I got caught up in the big “animation panel debacle” which was truly disastrous on that first day.  I lined up for the animation panel 3 hours before it began.  A lot of people asked me exactly how the “catastrophe” occurred, so I’m going to do my best to explain it.  The corralled us into one area in a series of lines, like below: 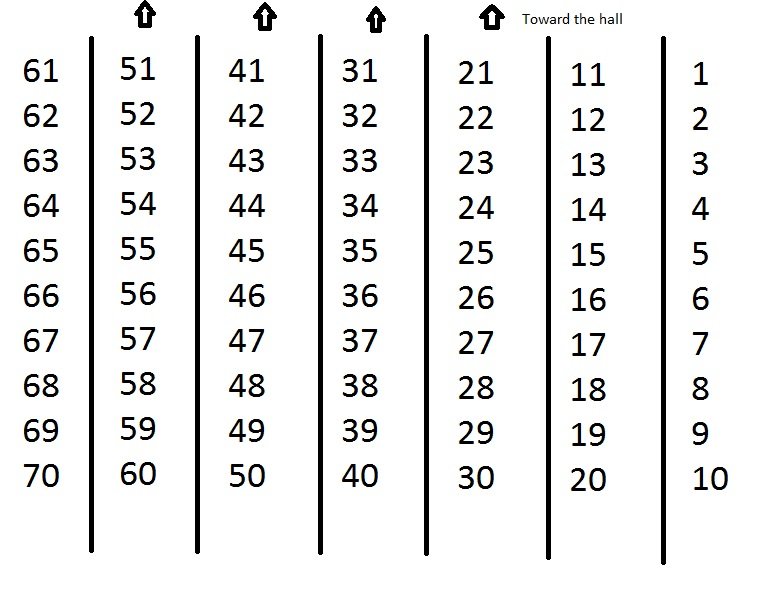 The number represent the people in line and the order in which they arrived.  So #1 would have gotten on line first (possibly 4-5 hours ahead of time).  #70 would have lined up last, maybe an hour before the panel started.  This is obviously a simplistic version of what happened, but let’s say that I was #20 in line.  That’s about where I was, multiplied by 10 to account for the number of people.  Around 12:30 they moved us from one corral area to another.  Instead of letting one line in at a time, so people would get in in the order they lined up, they just opened it and let everyone in the “front” go ahead.  So #41 was now way further up in the line than #9.  And #20 (aka, me).  It was craziness when people realized what was happening, with some shoving, barriers being knocked over, etc.  Hopefully that makes sense.

Regardless, we were all in the main queue area and not the overflow, which seemed to indicate we would all get in.  As long as I’m in I don’t care! So we waited another two hours and they finally started letting people in.  They were still loading the room around 2:45.  We assumed the panel would be starting late.  Wrong.  Turns out that it had started and the room was now full.  I’m guessing there were 1000+ people who didn’t get into the panel.  People who had been waiting for far longer than many inside the panel, and people who seemed pretty much guaranteed to get in.

And then all hell broke loose.  I mean, hell for Disney fans.  Instead of cursing people yelled “kill the Beast!”  Someone else yelled “Get Oprah down here! She would fix this!”  Understandably, people were pissed.  They weren’t leaving without something.  Eventually the cast members got people on the phones to try and come up with some sort of compensation.  There was anger, frustration, tears.  I felt all of those things.  It had been almost all of my day waiting for this panel.  I filmed some of the crowd’s reaction:

We did get a resolution, but had to wait around and didn’t receive it until close to 4pm.  I had been waiting since 11:30am for a panel I didn’t even get into.  But I do commend Disney for doing something.  They offered us wristbands for priority seating to either the live action panel or the parks panel the next day.  It didn’t make up for the fact that this first day of the Expo was a really rough one for me, and due to disorganization on the event’s part.  I left the expo and went to Disneyland instead, so I could actually have a little bit of fun the rest of the day.  The following day they also gave us a 1 day park hopper ticket to use at Disneyland.  I already had park tickets for the trip but it’s good for two years – perhaps I’ll be back before then to use it!

Another example of the disorganization: after the parks panel we got a pass to see Fantasmic either Saturday or Sunday with reserved seating.  Super exciting!  However, upon exiting the panel we had to line up to redeem the pass for a specific time slot.  That meant 7,000 people then had to get on line to get a wristband for their chosen viewing time.  I waited almost 2 hours just to redeem that pass.  I can think of a couple of better ways that this could have been handled. 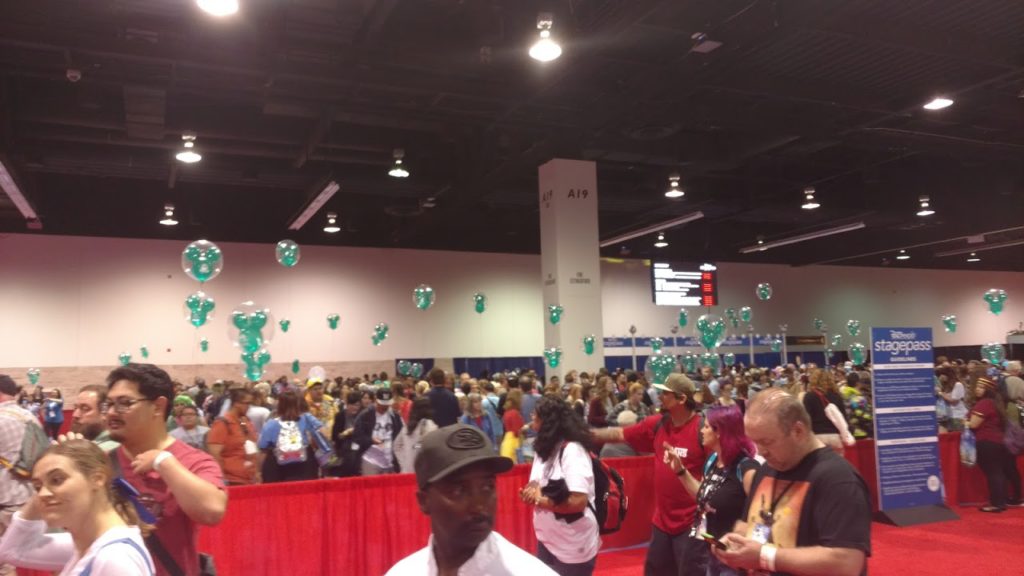 Lines, lines, and more lines to get a Fantasmic pass.

So the big question is: would I go back and do it again?  And I’m honestly not sure.  I think the truthful answer is that I would, but I wouldn’t be going to every single one.  It’s very expensive for me to get out to California.  It’s not like Disney World where I can find some cheap flights.  And the experience was a mixed bag.  I think I would know what to expect a bit better, but that would also mean not attending most of the major stuff.  I think if I hadn’t been caught in that one really bad situation with the animation panel i would be much more likely to return.  As it stands now, I’m thinking I might like to go for the RunDisney Tink race in 2019, so if I do that I won’t be at D23.

Have you been to D23?  What are your impressions of it?