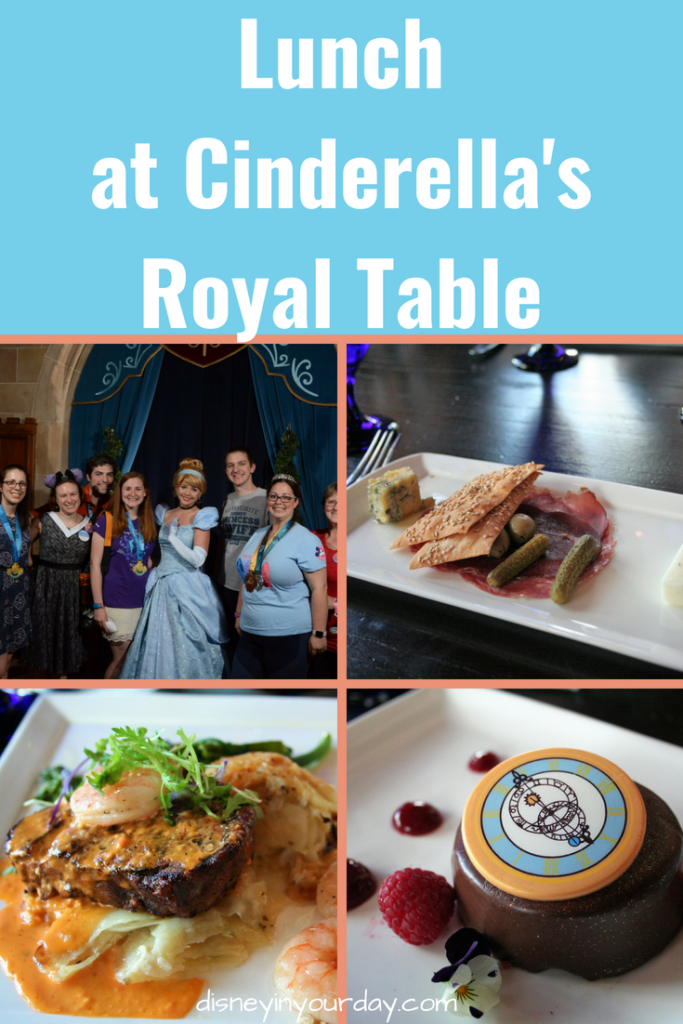 There’s definitely something special about “eating in the castle.” It’s fancy looking, there are princesses at the meal, and they supposedly treat you like royalty. It’s a signature meal, so we chose it as our celebration meal after the Princess half marathon. We had a lunch reservation at 1pm that day. 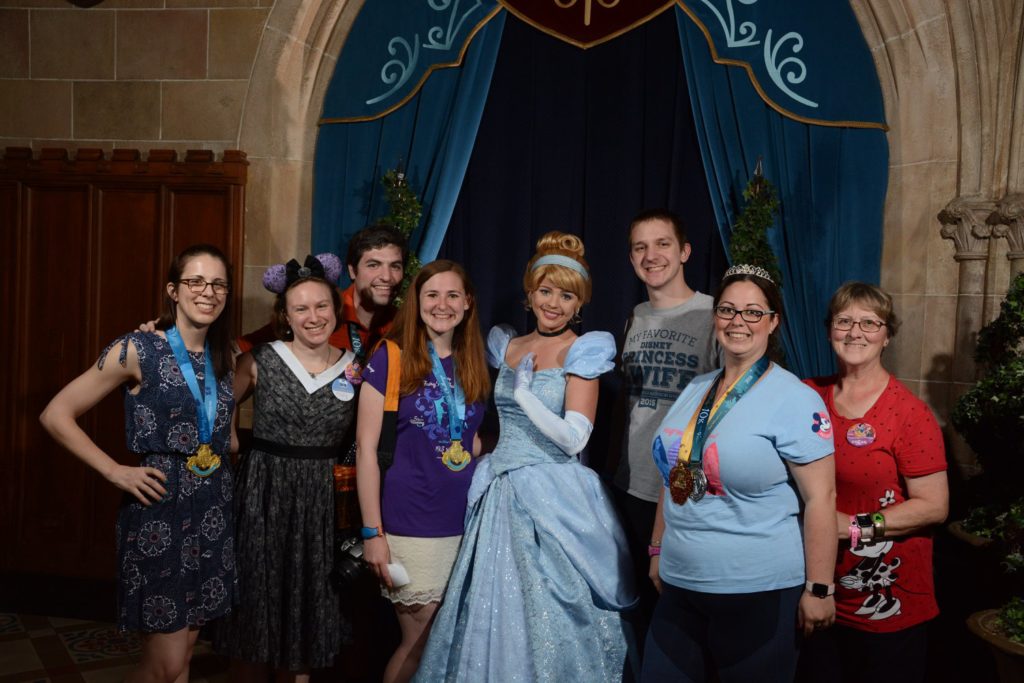 When you check in you wait until they call your party, and then they bring you to meet Cinderella and take your picture with her.  After that you are led upstairs to your table. The inside of the restaurant is very pretty, with large windows, big arches, and royal flags and coats of arms decorating the place.

I don’t believe we had the best service here, but it wasn’t awful. We noticed that our server never brought a drink menu or offered us alcoholic beverages, which are served at the castle now. We had thought about champagne, since it was a celebratory meal, but just ended up with water. 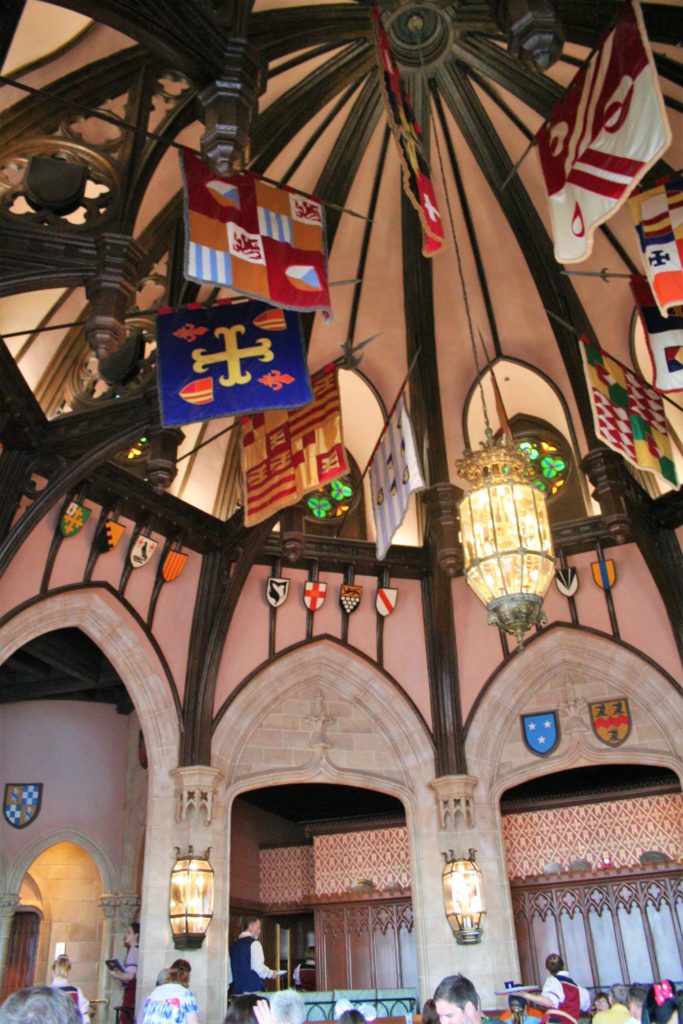 It’s also notoriously expensive. Lunch ended up being about $80 per person here.  And it’s pretty much all for the “experience” – being in the castle and meeting the princesses.  It’s definitely not for the food. If I was looking for good food I could get something much, much better for $80!

The one set price includes an appetizer, entree, dessert, and non-alcoholic beverage.  There are three choices for the appetizer: a soup, salad, or charcuterie plate.

Most of our party went for the charcuterie (I think there was a feeling of “if we’re paying this much for the meal, we’d better get the more expensive items). It’s described as “a selection of cured meats, cheeses, and other specialty selections of the castle.” 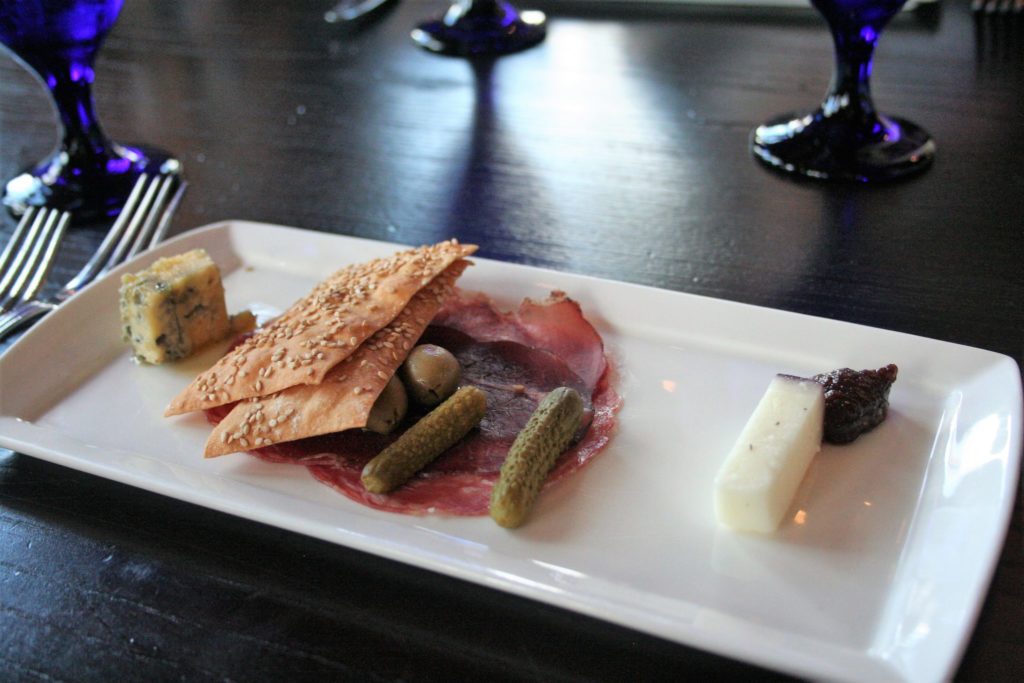 It was fine. It felt a bit measly and underwhelming, with two pieces of cheese and a couple of slices of things like salami.  Again, I know it’s not about the food, but I feel like for the price they could certainly step up the game here!

No one got the salad, but two people opted for the soup of the day, which was tomato basil: 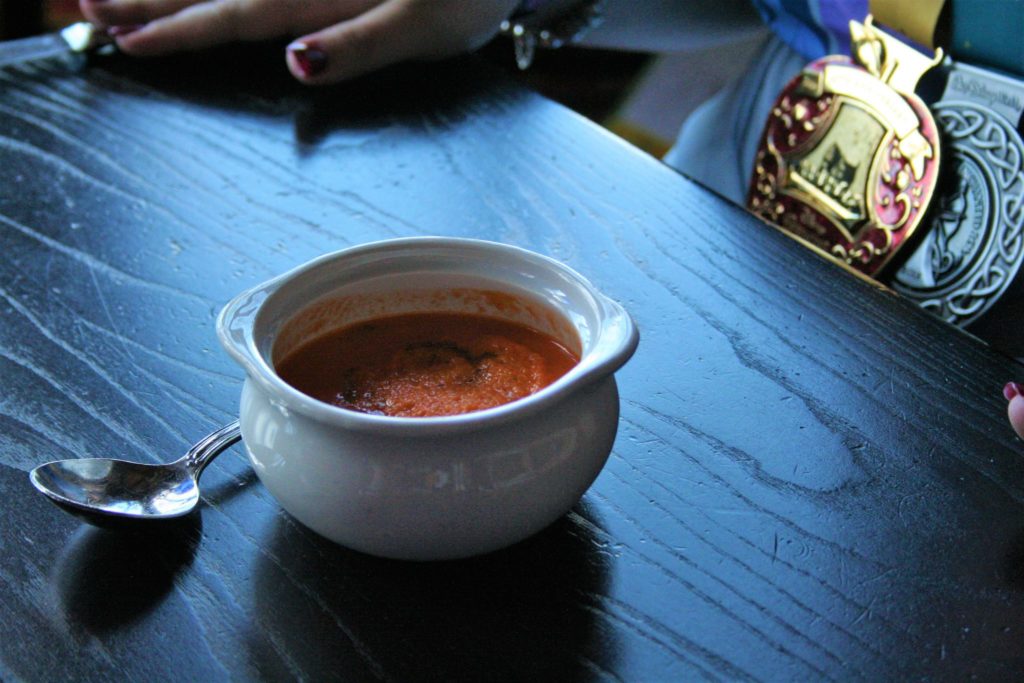 For entrees we again had an overwhelming majority of our large party go with the same option – the Beef and Shrimp (beef tenderloin, buttered shrimp, fingerling potatoes with nueske’s bacon and blue cheese, summer vegetables, and a shallot-herb compound butter): 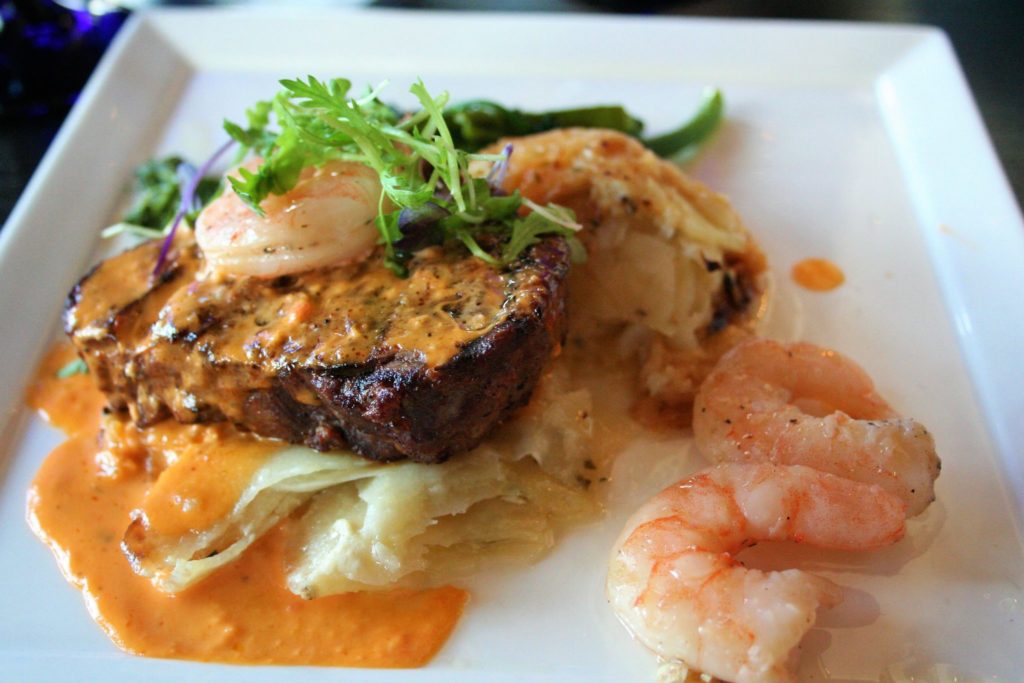 It was… pretty unmemorable. When I have a good dish in Disney I’m thinking about it for awhile. I’m sure I didn’t think about this pretty much ever after eating. It was good, but nothing special.

Jason had the Catch of the Day, which that day was salmon served with a shrimp and seafood risotto: 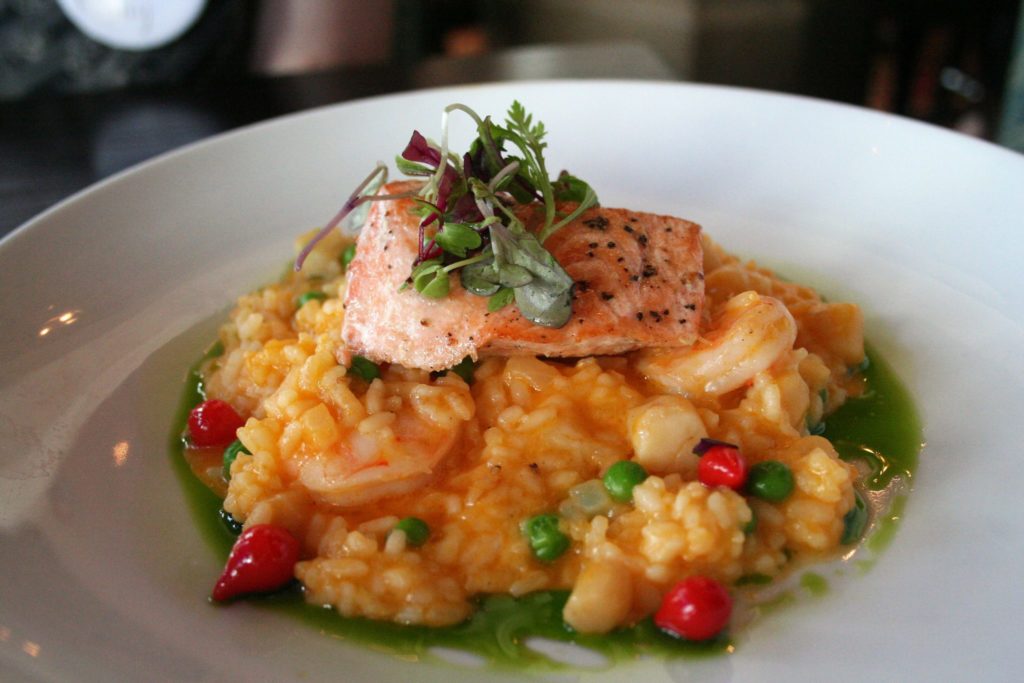 I definitely wish I had ordered this instead! The risotto had a ton of flavor and the shrimp was well cooked. I kept stealing bites of his meal and remember it better than mine.  It was the only dish of the meal that really stood out as being anything worthy of talking about. 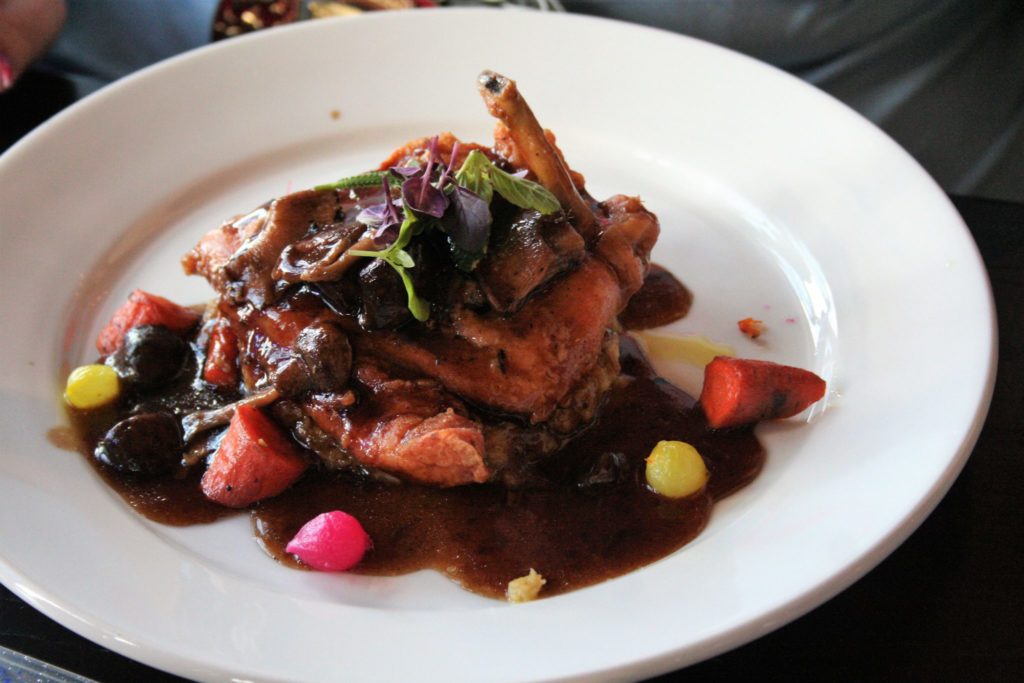 For the grand finale, the most popular dessert was “The Clock Strikes Twelve” (Dark chocolate mousse with a dark chocolate ganache served with a raspberry coulis): 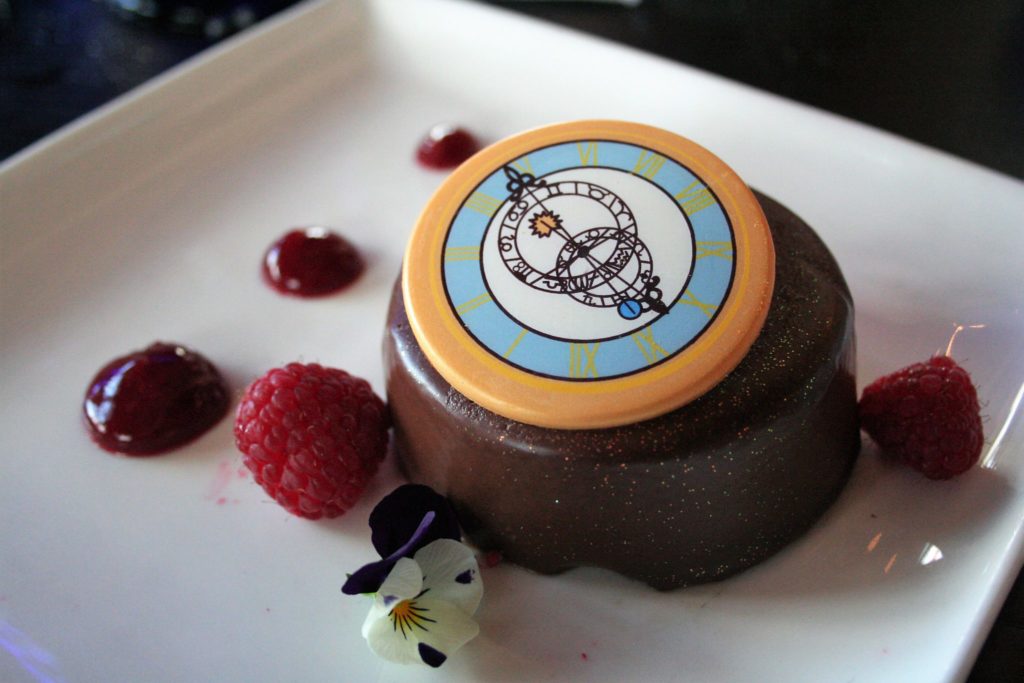 It was absolutely gorgeous and tasted just like you’d expect – very chocolatey! The raspberry sauce went well with it, and I wish there was more sauce because otherwise it was a bit too much chocolate in each bite. Very rich. 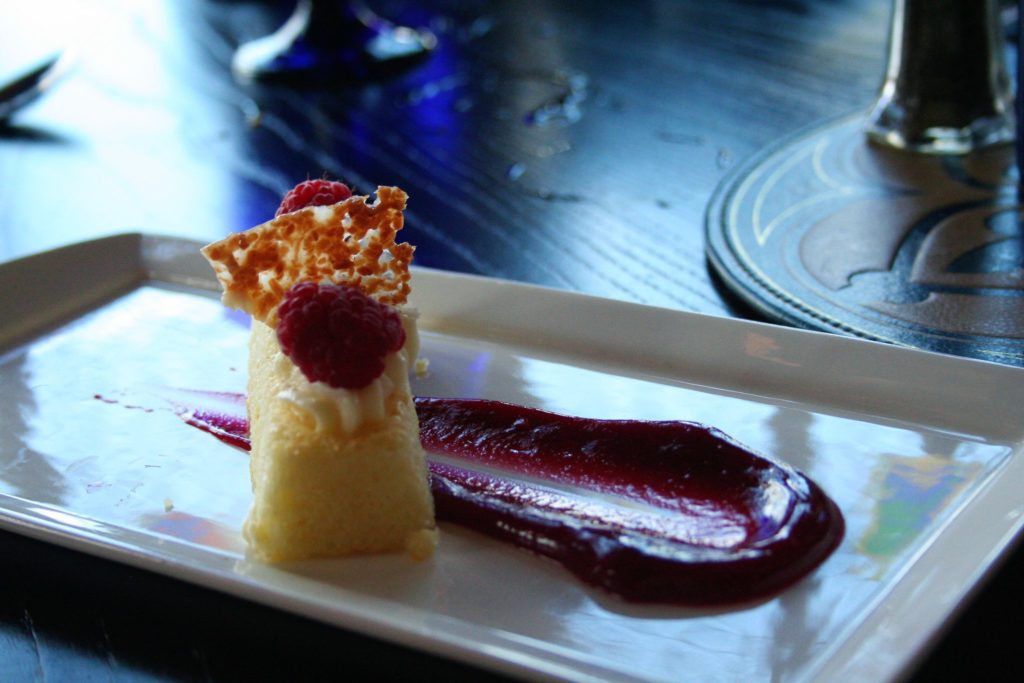 Despite the elaborate description, this is basically just cheesecake.  Decent cheesecake with lots of raspberry sauce (which I did indeed steal off of Jason’s plate for my chocolate cake).

The final dessert was called Jaq and Gus (Amaretto cheesecake with an almond crust, macerated peaches, and hibiscus meringue): 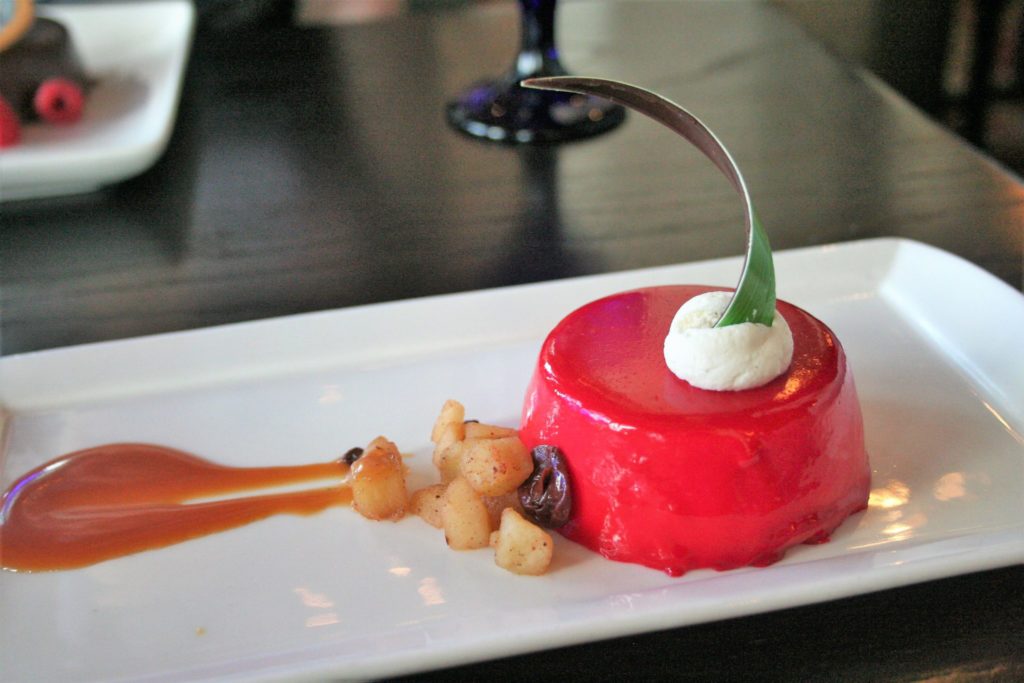 Of course we had lots of character meet and greets too!  With a group of 8 adults the princesses don’t really say very much to you, they just kind of go around and take pictures with everyone and continue on their way.  We saw Aurora, Jasmine, Snow White, and Belle.

So, my final thoughts? I’m not going back to Cinderella’s Royal Table. I’m too much of a foodie to spend that much on meeting the characters, especially when most of them are characters you can find elsewhere (or at the very least, at Akershus).  I might do it again if I was ever traveling with a little girl, but until then I’ll be over at the other castle (Be Our Guest!) or Skipper Canteen. It’s something that might be worth experiencing once if you’re interested.

Have you been to Cinderella’s Royal Table? What did you think?