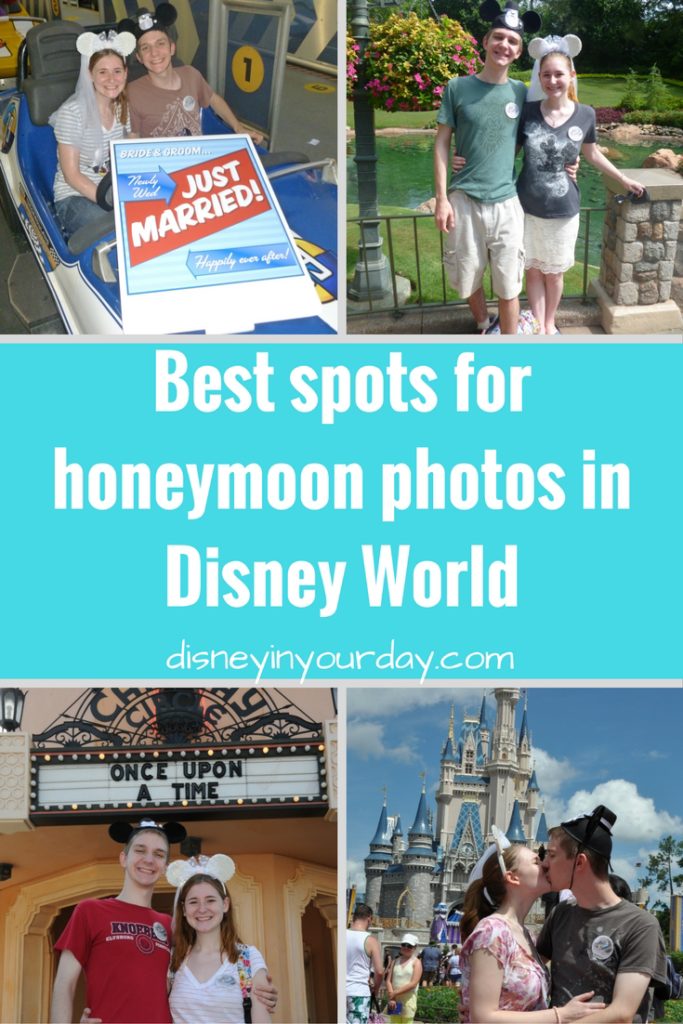 My husband and I celebrated our 5th wedding anniversary this past weekend.  So I thought it might be fun to share some of our honeymoon photos at Disney World!  I hadn’t visited in over 5 years at that point, and it was our first time ever visiting together.  So of course it was very special.  Disney is great about spreading the Disney magic and pixie dust for special occasions!

One thing we of course wanted to make sure we did on our honeymoon was take lots of photos.  We got photopass and also relied on kind strangers in places that didn’t have photopass photographers.  Of course you always make sure to take photos in front of the main attraction of the park, like the castle and the tree of life.  But there are tons of other great spots around the theme parks for romantic photos!  Here are some of our favorite honeymoon photos at Disney World:

In front of the castle – various angles 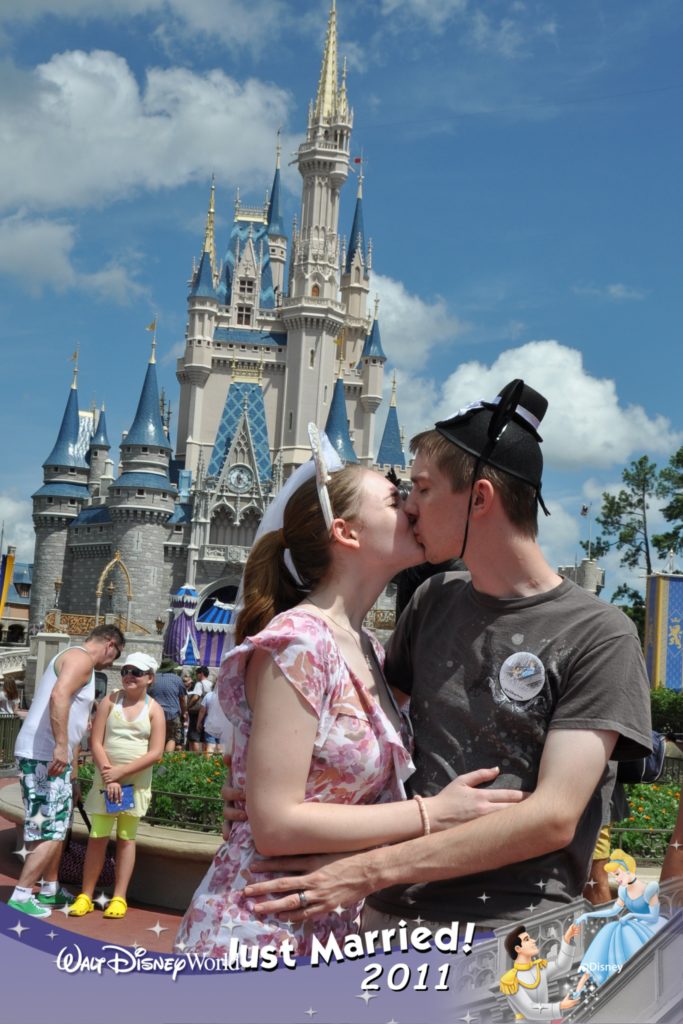 Of course castle photos are a given.  But you can get great castle photos from lots of places other than the typical Main Street shots.  And if you’re like me, you can never have too many castle pics! 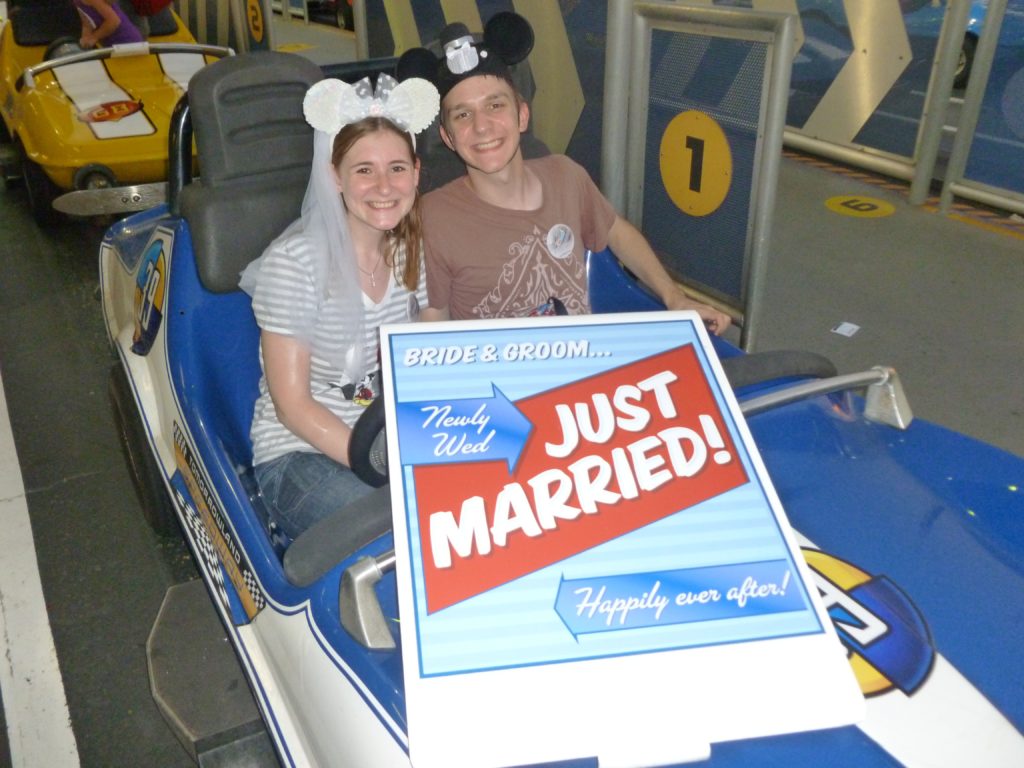 When we rode the Tomorrowland Speedway in Magic Kingdom, they gave us a “Just Married” sign to put on the back of our car!  And of course we had to get a photo of that.

Sword in the Stone 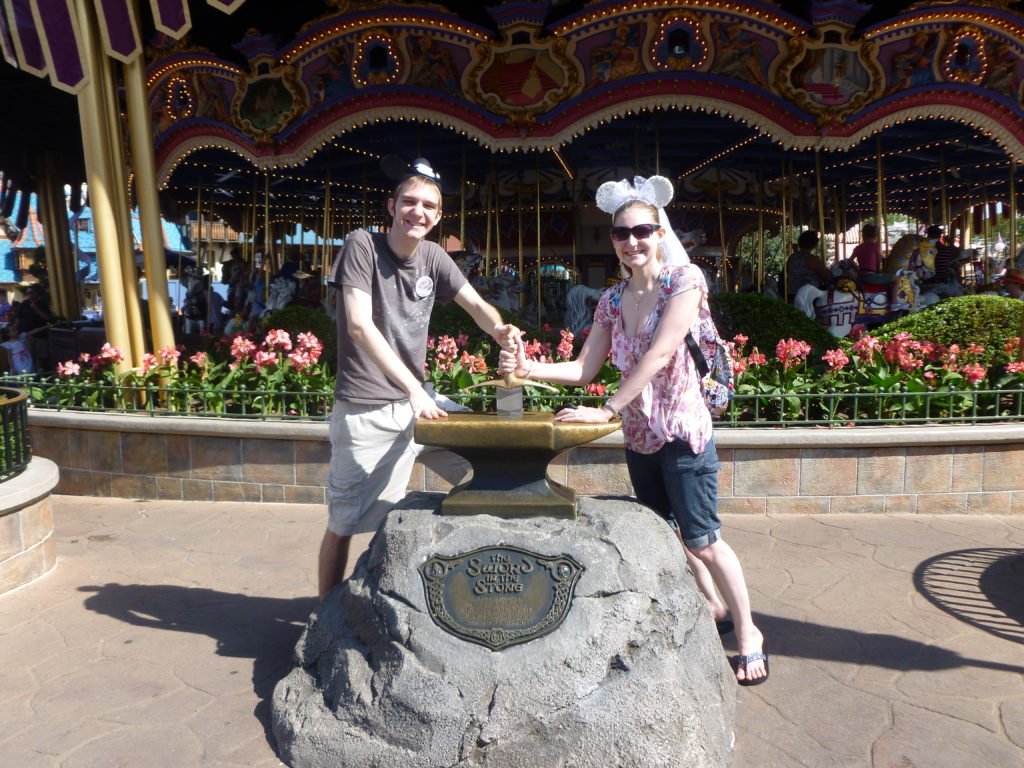 This is one of my favorite photo opp spots in Magic Kingdom, and it’s cute to do one together 🙂 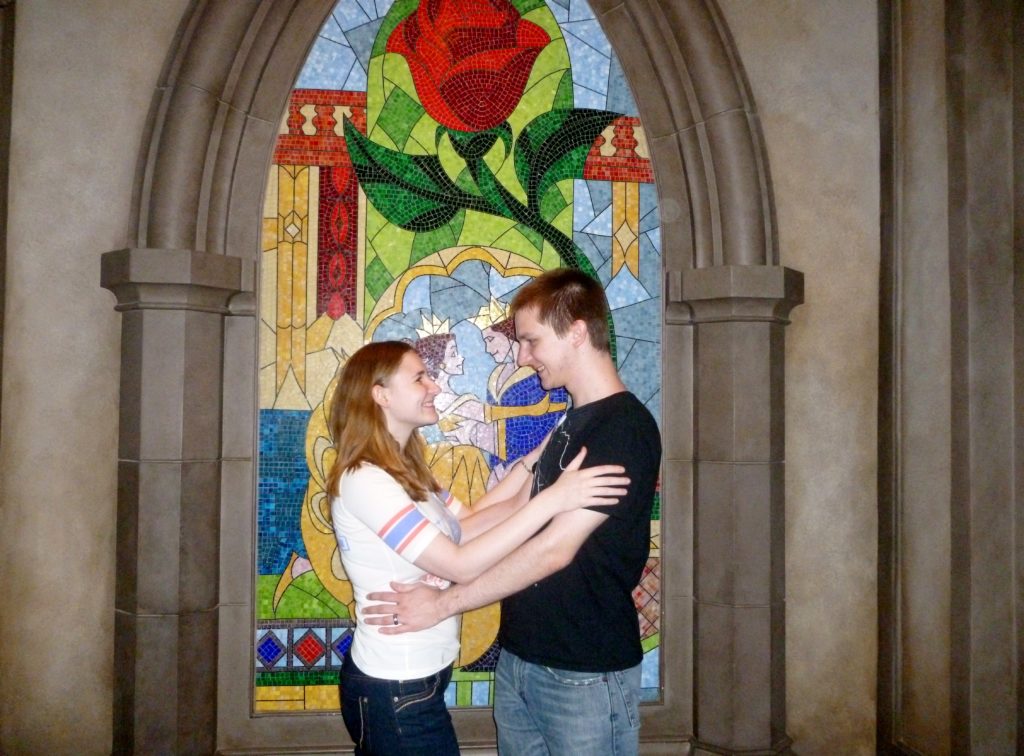 If you’re fortunate enough to have a reservation at Be Our guest, the iconic stained glass window of Belle and the Beast can make a beautiful background for a honeymoon photo (this photo is not actually from our honeymoon because Be Our Guest wasn’t built yet, but I still think it would be a great spot!). 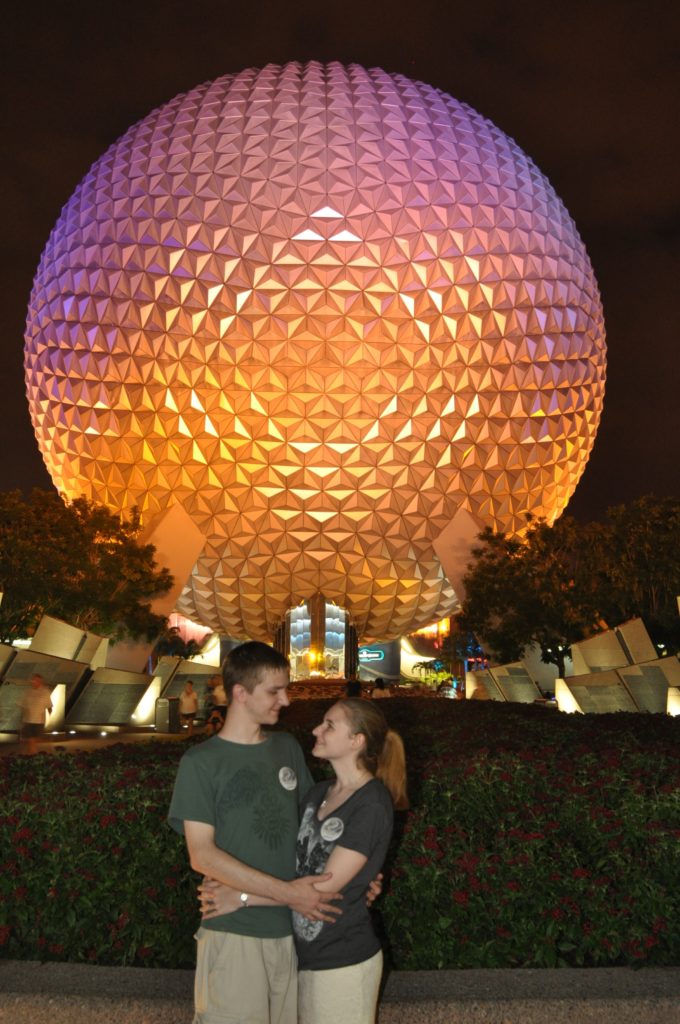 You probably made a note to grab a photo in front of the “big silver ball” when you came in.  But I think it’s even more beautiful at night when it’s lit up, so stop by once it gets dark too!

The backdrop of so many of the countries in the World Showcase is beautiful.  Some of my favorites include France, Morocco, and the garden area in the Canada pavilion. 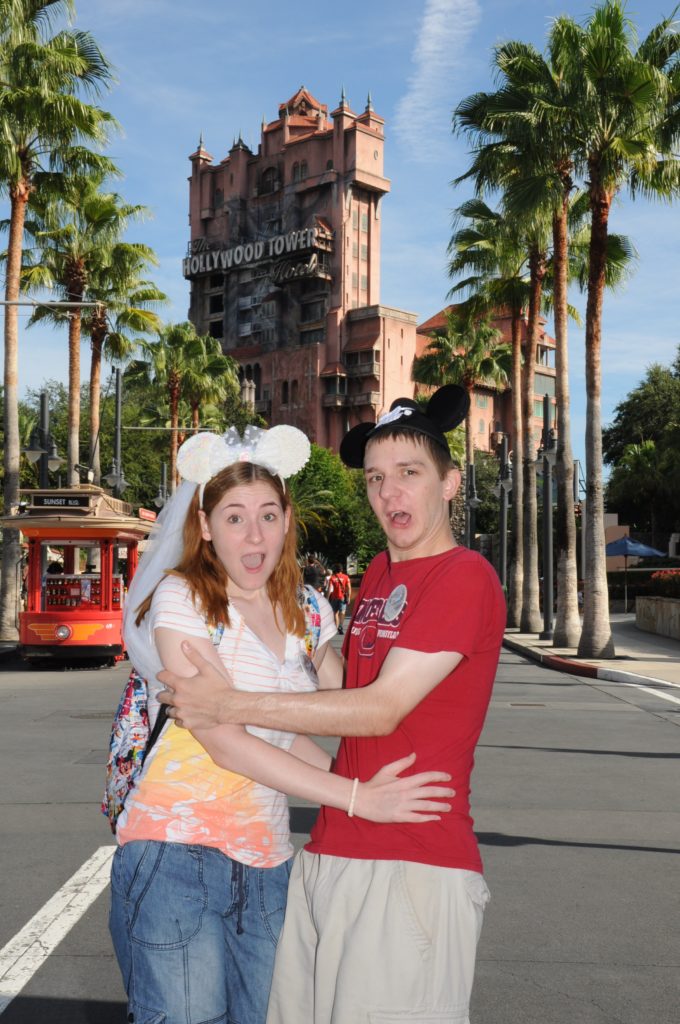 There’s something romantic about the idea of being scared together (I think it goes back to that idea of watching a scary movie together).  So a photo in front of the Tower of Terror can be super cute!

By the “Once Upon a Time” store front 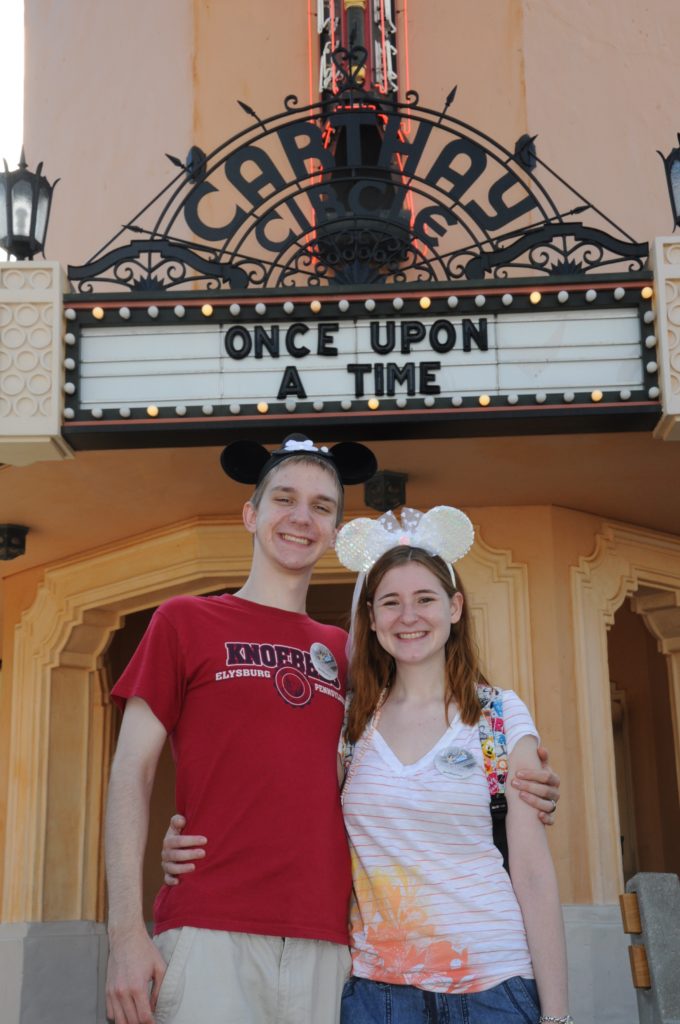 One of the shops on Sunset Boulevard is called Once Upon a Time and has a marquee out front.  It’s the perfect phrase to pose by for people starting their fairy tale together! 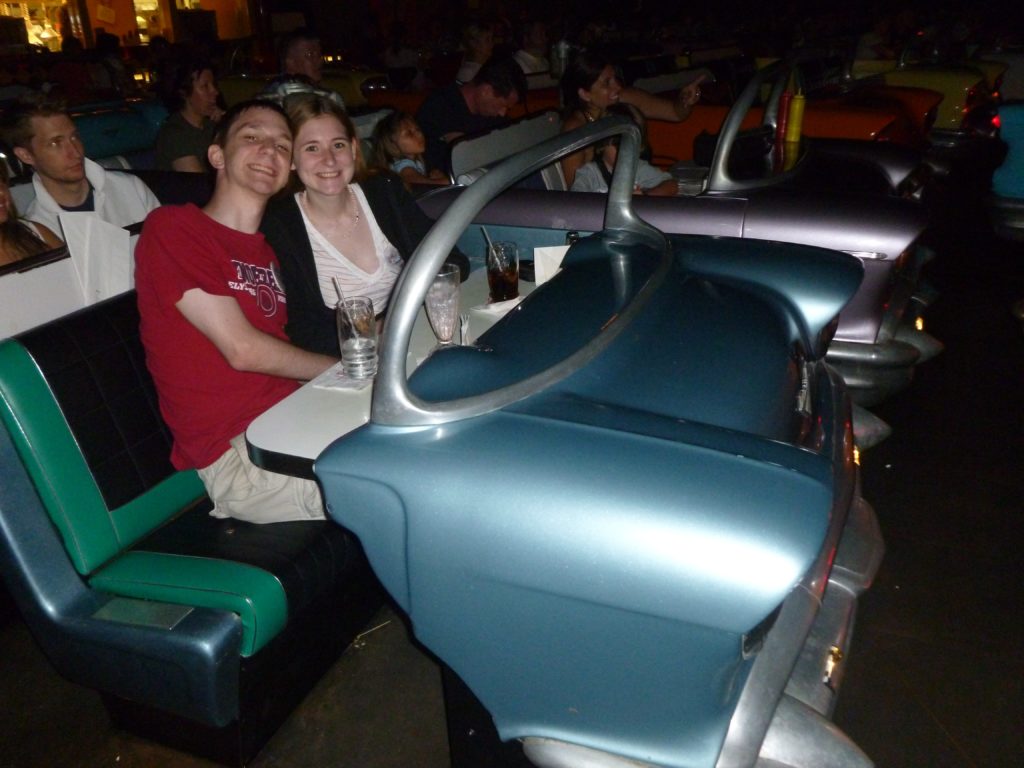 Lots of the restaurants at Disney have really fun backdrops!  We asked for photos at a lot of our meals, including T-REX with the dinosaurs, Coral Reef with the fish tank in the background, and Sci-Fi Dine-In in our car.

The characters can be a ton of fun when they realize you’re on your honeymoon!  We had a lot of great character interactions, but my favorite was probably when we met Buzz Lightyear.  He insisted on re-creating our wedding ceremony.  He “walked me down the aisle” and then performed a mock ceremony for us!  And they are some of my favorite photos from the trip. 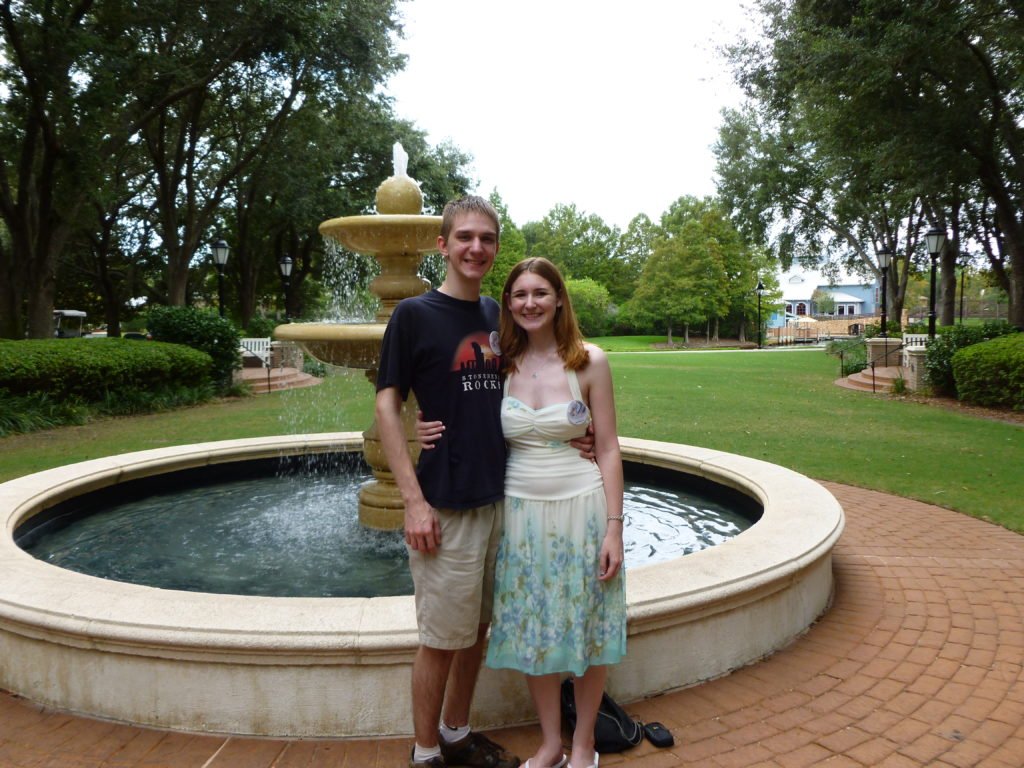 So many of the resorts are  really stunning and would make for great backgrounds.  We stayed at Port Orleans Riverside, which I think is very picturesque.

What do you think would be the best spots to get honeymoon photos at Disney World?