You are here: Home / Disney World / What Happens when your flight to Disney gets delayed or cancelled 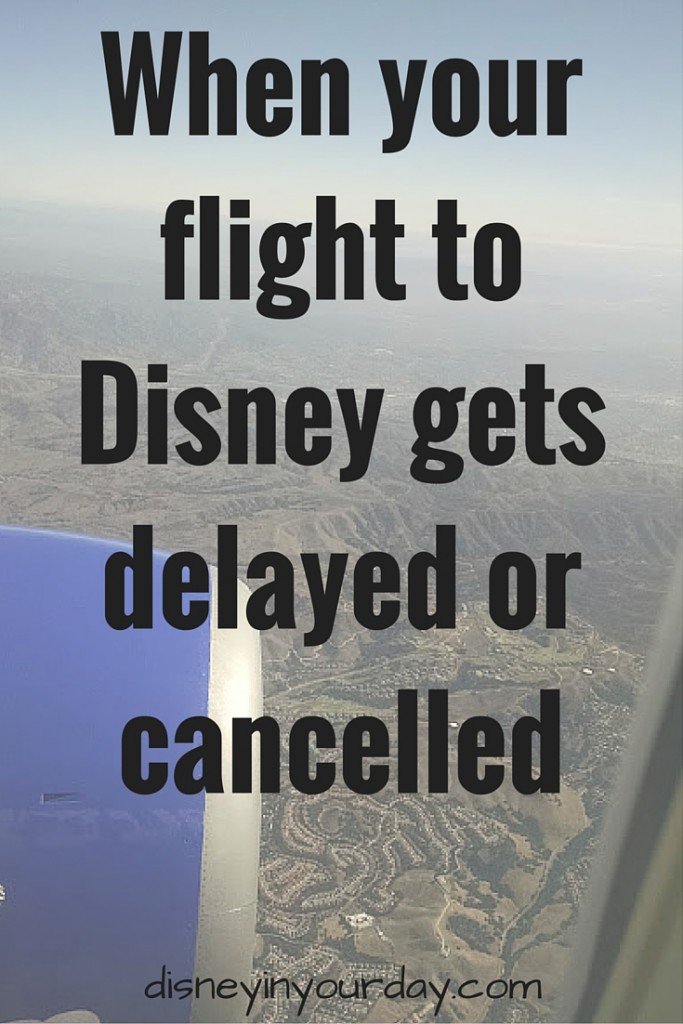 This post was written on my way down to Disney World last week, after a very frustrating day of traveling!

This, of course, is just my personal experience, but I thought I would share it with you in case anyone else runs into a similar situation.  As I write this it is 7:00pm, and I’m sitting on an airplane somewhere between Detroit and Orlando.  I have dinner reservations at Sanaa at 7:05 that I am obviously not going to make, but at this point I’m just grateful that won’t have to wait until tomorrow to be in Disney World.

First, the story of what happened: We were flying from Philadelphia to Orlando, with a 1 hour layover in Detroit.  We left our house at 7am, got to the airport by 8, and were on the plane at 9.  Everything went smoothly.  We arrived at Detroit exactly on time, made it to the new gate just as they started boarding, and were on the plane within 10 minutes.  Then, five minutes later, they said we had to get off.  The plane was having mechanical issues.  They would update us at 1pm.  1 pm comes around and they say that the plane needs to be repaired and they’ll be sending a new plane.  It could be here in an hour.

Well, half an hour later we get another announcement: no new plane is coming after all, and they don’t think the old plane will be fixed today.  So “anyone that wants to get to Orlando” can come rebook.  Well, obviously everyone wants to get to Orlando, so we stand in a massive line of people.  By the time I get up to the front they are telling everyone that they won’t be able to get them on  a flight until tomorrow morning.  In tears, I make my way to the counter.  Through some miracle the woman is able to get us on a flight to Atlanta, and then transfer to Orlando.  We won’t get in until after midnight but it’s better than losing half a day tomorrow.  We have hours to kill and don’t know our new gate so we just sit around waiting.  Well, around 4 o’clock they announced that our old plane actually had been fixed and was coming back!  We managed to get back on it and finally take off for Orlando at 5:30.  We around arrive around 8, which is 5 hours after we were originally supposed to be there.

Now, I first want to mention what Delta did well during this whole situation: the people were great to work with.  They were sympathetic and as helpful as they could possibly be.  They gave us a $50 voucher to use on another flight (though I haven’t looked at that yet so I don’t know if there are any restrictions or anything like that).  And they brought out free soda and snacks, and gave us a voucher for food at the airport.

Unfortunately, they did many more things wrong than right, in my opinion.  To begin with, that meal voucher – it was for $6 per person.  Have you looked at the cost of airport food?  My husband and I got two sandwiches at Quizno’s and one soda, and it was $18.  Six dollars is not covering a full meal for anyone.  Once the 5:30 flight was finally announced we had to wait in another line to get our tickets changed back.  Not only did we wait in line for awhile, but I spent 20 minutes at the counter because no one was authorized to print our tickets!  Since we had been rescheduled with a layover it was apparently more complicated, and we had to wait while they called someone to do it for them.  We just barely got onto that flight, even though we had technically spent over 5 hours at the gate waiting for it.

Finally, I was irked at the way they handled giving us information.  When they originally thought the plane was going to be fixed we were able to print new vouchers from the electronic kiosk that said we’d be taking off at 3:30 from gate A1.  Later we discovered that this was basically fictitious – they never intended to take off that early, and gate A1 was not even a functioning gate.  So I don’t appreciate being lied to by that ticket.  Then when they finally started rebooking us, they never mentioned that there was any possibility our plane would still leave sometime today.  We stuck around because we had nothing else to do, but many families that couldn’t get on until the next morning left with kids in tears.  If there was even a slim possibility they could get back on the original flight they should have told them.

At the end of the day, you can’t help it when something goes wrong – after all, it’s better to be safe than sorry.  But the airlines can handle how they deal with such situations.  I can’t praise the actual people that worked for Delta enough, but the procedures that they had to do seemed inadequate at best.

But the good news is that we’re almost there, and I’m definitely looking forward to the Magic Kingdom tomorrow!  I just hope my luggage made it too…

Have you ever had a flight that was cancelled or delayed?  What was your experience like?