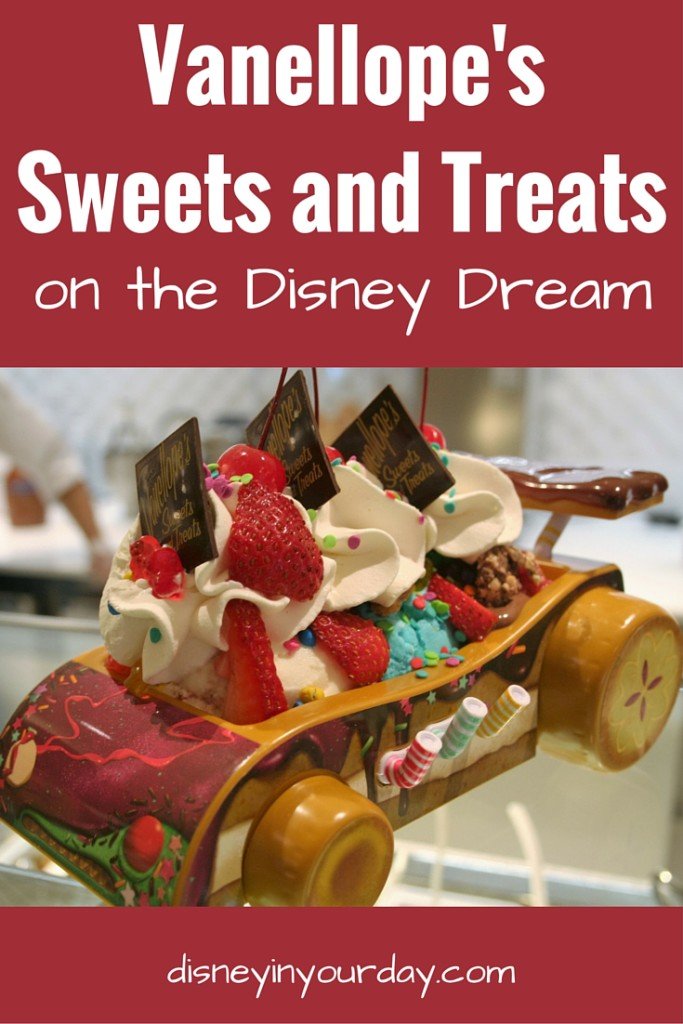 When I first got a tour of the Disney Dream, I was unsure what to make of the ice cream shop known as Vanellope’s Sweets and Treats.  On the one hand I was very excited to see something Wreck-It Ralph themed, as that is one of our favorite Disney movies and you don’t usually see much from it.  On the other hand it’s a cruise ship and so many food items are included in the price.  Vanellope’s is an extra cost – would it be worth it to spend money on ice cream when there was free soft serve right around the corner? 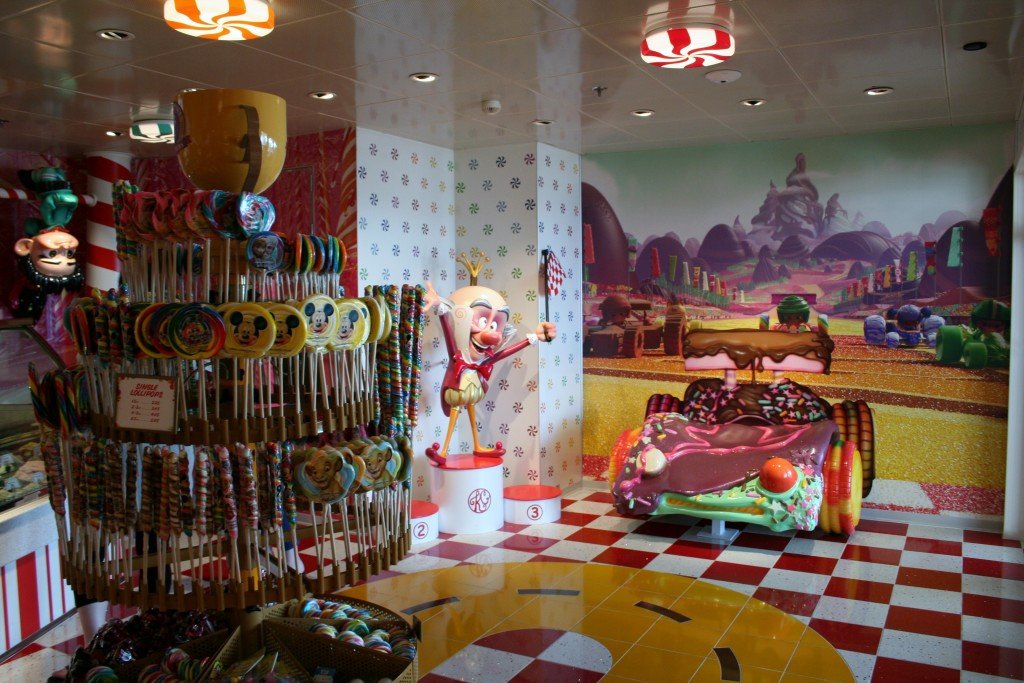 The answer is a resounding yes!  Visiting Vanellope’s was one of the highlights of our trip.  They have tons of flavors of both gelato and ice cream, and they let us taste whatever we wanted.  They also have two bigger, shareable sundaes that come in collectible dishes – one is Vanellope’s go kart and the other is a big trophy.  Jason and I decided to share the go-kart.  It was $12.95 and came with 3 scoops of ice cream and 5 toppings, plus the car to take home. 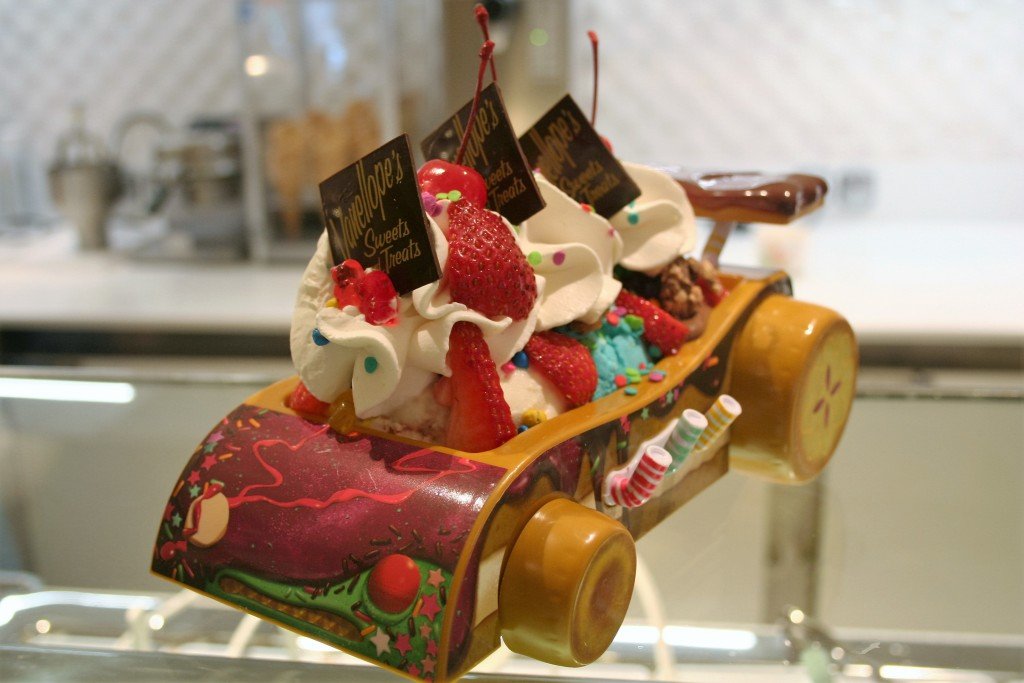 Though the menu said ice cream, our awesome cast member Francisco told us that we could choose from the gelato too.  I just want to take a moment to give a shout out to Francisco.  We had such amazing service on the Disney Dream, but he really stood out to us.  He was so excited about building our sundae, taking the time to make it look like a work of art and bending over backward for anything that we wanted.  If you get the chance to go on the Disney Dream anytime soon be sure to look for him!

For our three flavors we went with all gelato (they were the more interesting flavors).  We chose chocolate orange, “candy explosion” (which tasted sweet and fruity), and mascarpone cheese with raspberry.  The toppings were even harder – I felt like I was five years old with the one we picked out!  Our colorful sundae was adorned with sliced strawberries, snickers bar pieces, gummy bears, rainbow chocolate chips, and sprinkles.  Whipped cream, cherries, and chocolate garnishes were also included.  Francisco even took the time to place two little gummy bears right on the front of the car to represent Jason and me driving it 🙂 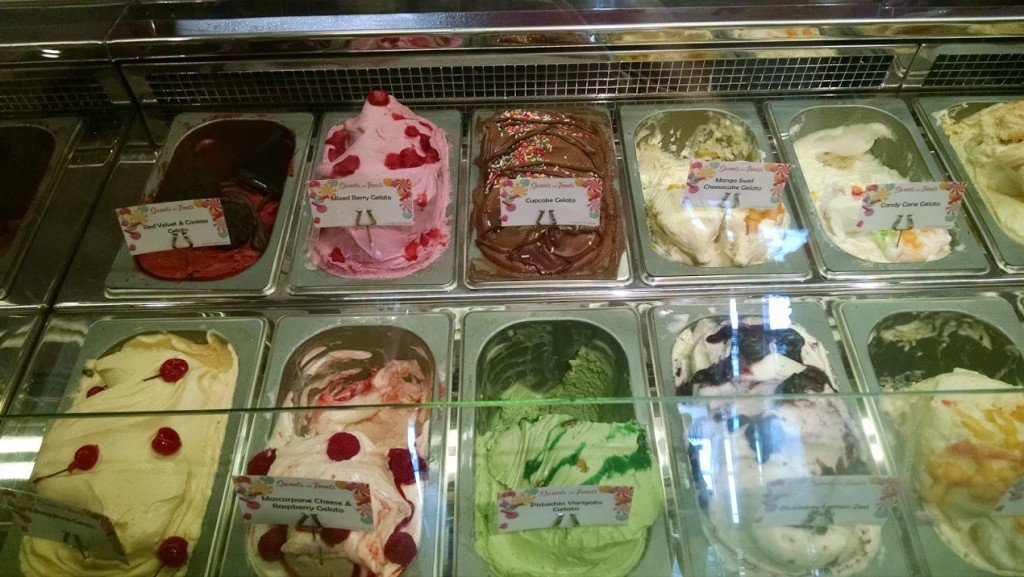 And let me tell you, it tasted amazing.  The quality of the gelato is fantastic, so even if you don’t want to big car I definitely recommend at least getting a scoop or two.  I will tell you that people who walked by our ice cream car were pretty jealous – we got a lot of comments about how good it looked!

When we finished Francisco offered to wash out the car for us and put it in a bag.  The car is so cute and I’m excited to have a Wreck-It Ralph souvenir – plus the wheels actually move so if you have kids it would be the perfect toy!  Francisco also offered to take some photos with us around the shop. 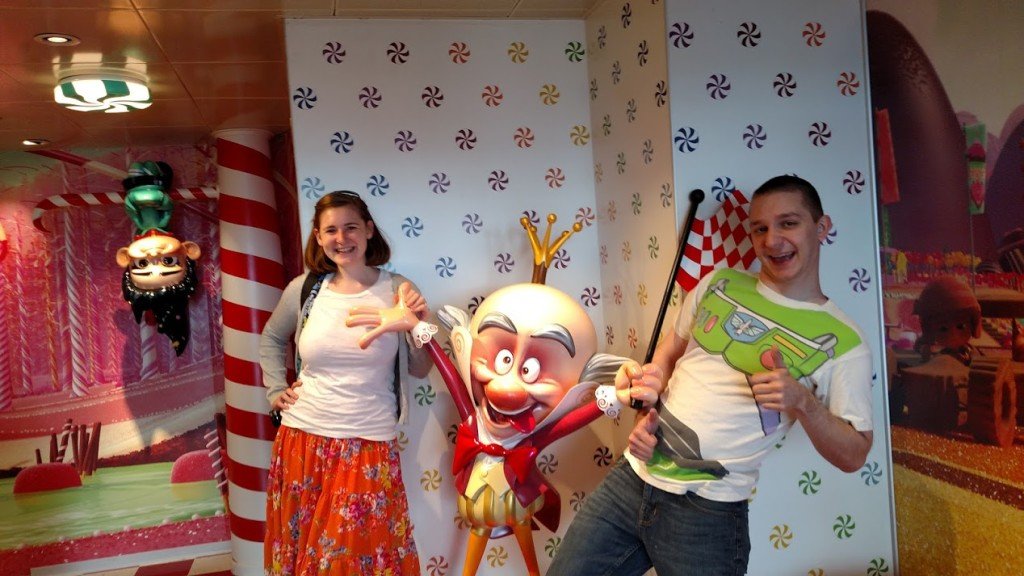 We had such a fantastic time here and really felt like kids at heart.  The ice cream tasted amazing but the fun of it and the service was just as good.  I’m always a bit hesitant for anything I have to pay extra for, but in this case it was totally worth it!

Would you make a stop at Vanellope’s Sweets and Treats?