Last week I was fortunate enough to attend an event hosted by Disney about Toy Story Land for travel agents.  These sorts of events always motivate me to want to up my game when it comes to travel agent stuff and hopefully book more trips for people! If you’d like my help planning a trip (my services are free!) just email me at [email protected]! 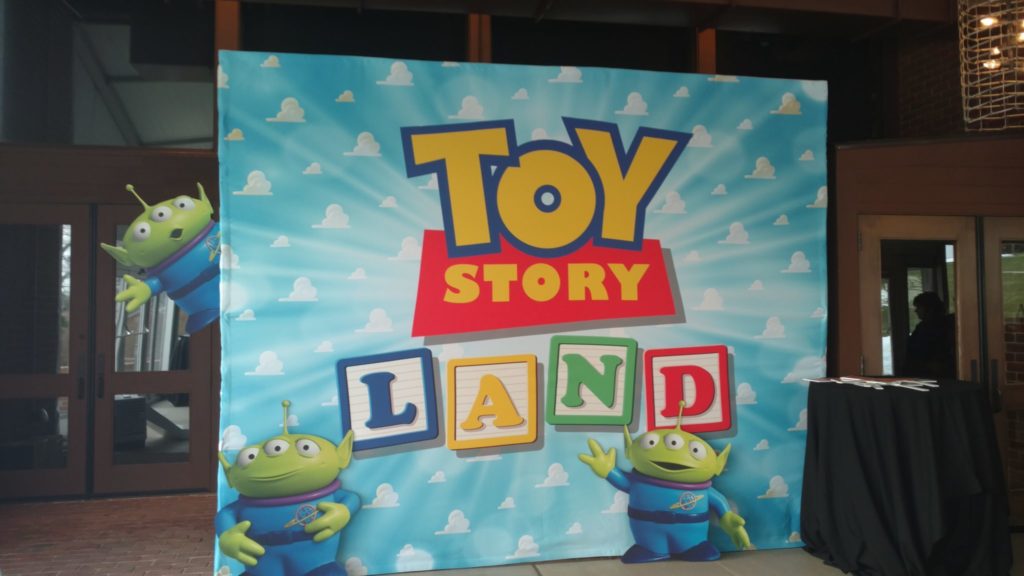 But anyway, on to the event!  Disney always hosts a good event, and they travel around the country to present this at different cities. I attended the one in the Philadelphia area.  Check in was between 5 and 6, and the event itself started at 6. I arrived right around 5 and we were able to wait in a reception area. It felt very much like a cocktail hour at a wedding. There was an open bar with a specialty drink – sparkling wine with rock candy, a fun twist for a Toy Story themed event!  And servers came around with mini appetizers.  Look how cute these little lobster rolls were! 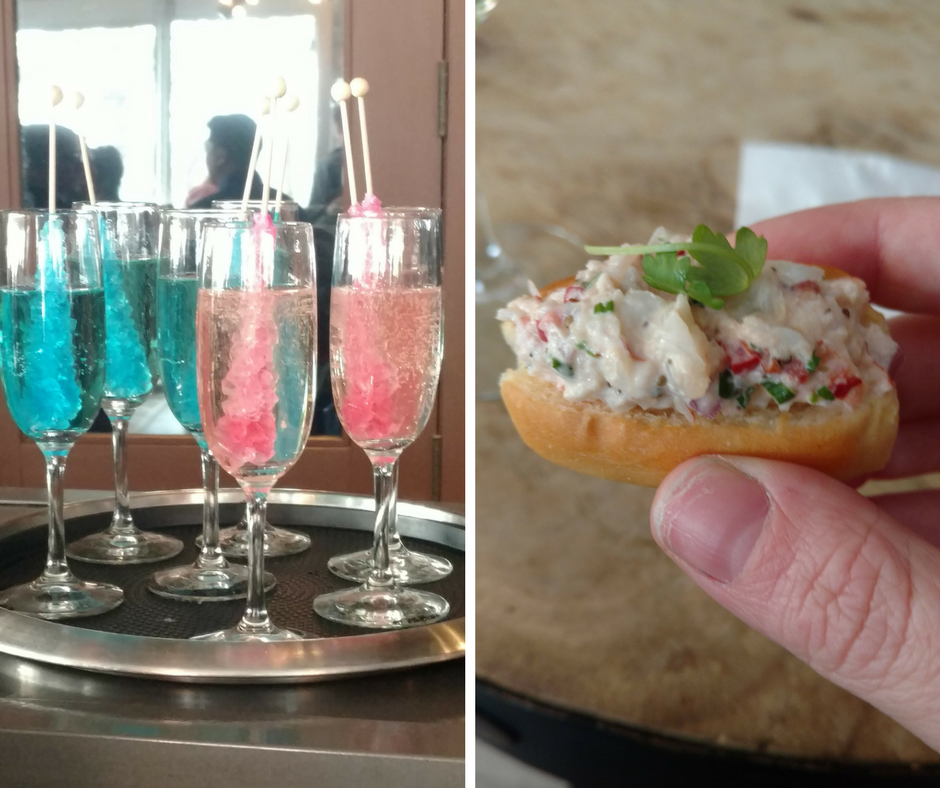 They also had brochures out with all the updated information on Disney World, Disneyland, Disney Cruises, and Adventures by Disney, so I grabbed all that to have the most current info on hand.  I got to chat with a couple of other agents for a bit, and then we were in for the presentation!

And you know with Disney it’s not just a talk or a slideshow, it’s a show!  We were ushered in by green army men, who poked some fun at us (I was called Mary Poppins by one for the scarf around my neck) and also took the time for selfies.  And yes, they pulled someone onto the stage to totally embarrass him and make him do jumping jacks and push ups.  The whole night was a good mixture of fun and information. 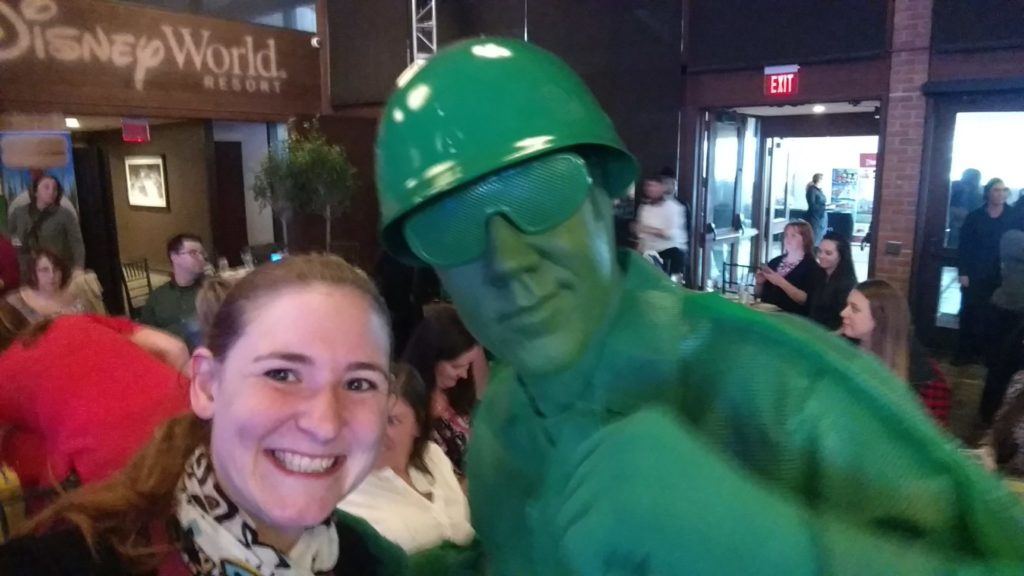 Most of the things were were told were items we already knew about, but it’s good to hear it straight from Disney and be reminded of all of the exciting things happening this summer! 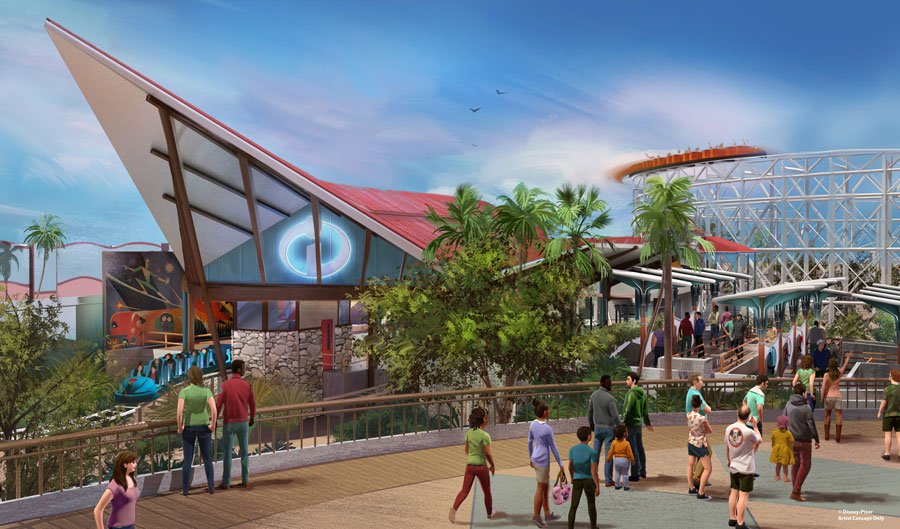 Hearing about all of the fun coming to the new Pixar Pier and the Pixar Fest they’re hosting this summer made me wish I had a trip to California planned.  Pixar Fest starts on April 13th, and will include a new fireworks show – that has Buzz Lightyear flying from the castle instead of Tink!  Paint the Night will go to California Adventure and the Pixar Play Parade will head over to Disneyland.

On June 23rd Pixar Pier opens, and will feature the Incredicoaster.  They are trying to tell more of a story with this version of the roller coaster, even including a long Mrs. Incredible stretching throughout one of the tunnels!  Jessie’s Critter Carousel will replace the current King Triton carousel.

And for fans of the Cove Bar, Lamplight Lounge will be the location taking its place. We got one piece of excellent news – the lobster nachos will still be served!  No word on the exact cocktails, other than they will be unique and fun.

Finally, Downtown Disney has seen lots of upgrades.  Splitsville is now open there, and Naples restaurant will be getting expanded outdoor seating.  There are several places coming that will serve craft beer, which I’m particularly excited about (Black Tap Craft Burgers and Beer, and Ballast Point Brewing Co.). 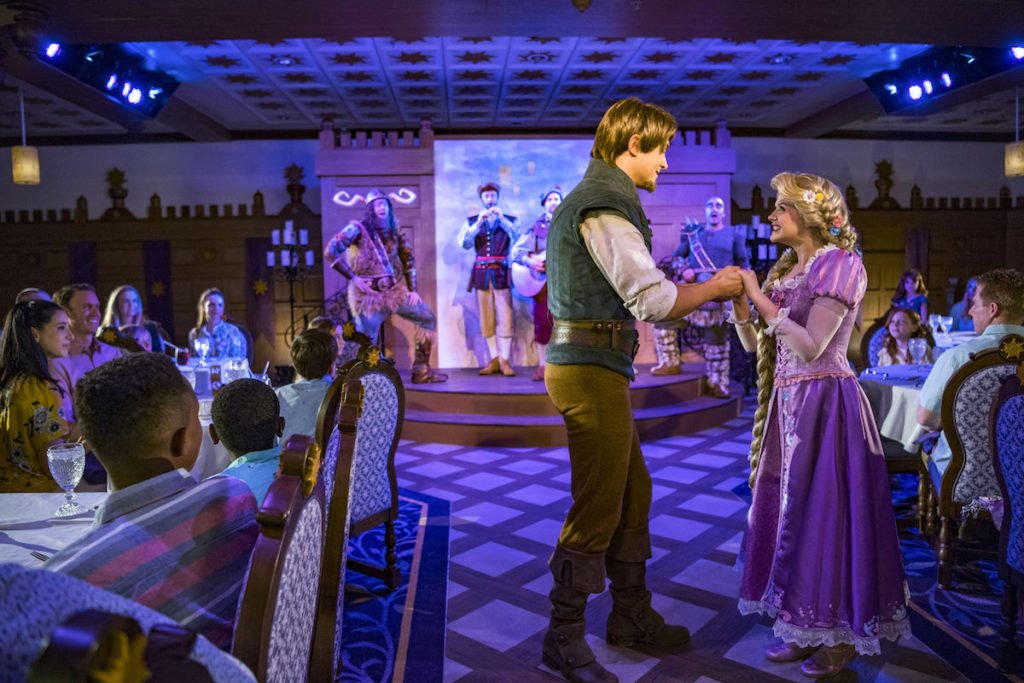 Exclusive to the Disney Magic, Rapunzel’s Royal Table is an all-new dining experience inspired by the beloved story of Disney’s “Tangled.” Guests can join in the festive celebration that features live musical performances by Rapunzel and Flynn Rider. (Matt Stroshane, photographer)

Not much to update on the cruises, other than a reminder that 3 new ships will be coming. They also discussed the renovations on the Magic (Rapunzel’s restaurant, the Cove Cafe redesigned, and the Rainforest Room saw the addition of steam and hydrotherapy). I can’t wait to sail in two months! 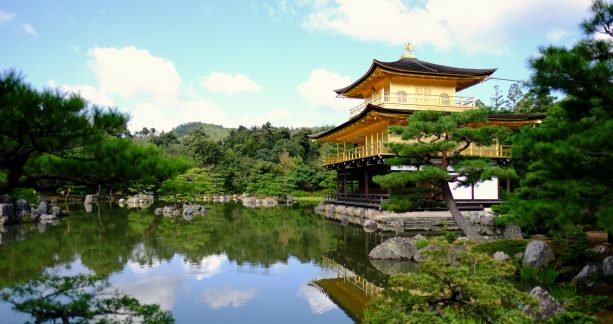 Adventures by Disney will start doing trips to Japan in 2019, with the opportunity to visit Disneyland Tokyo.  Bookings for that will open later this spring. 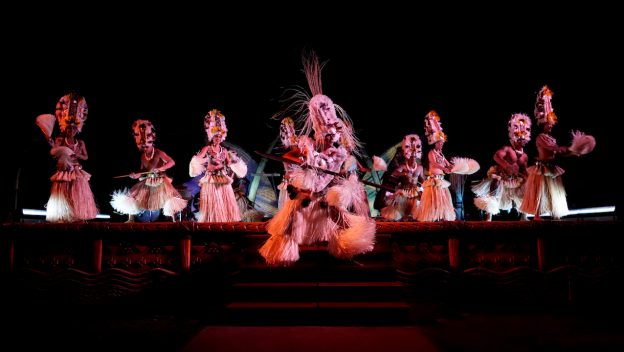 The only update on Aulani was that they have a new luau, telling the story of demigod Maui. I still need to make it out there! 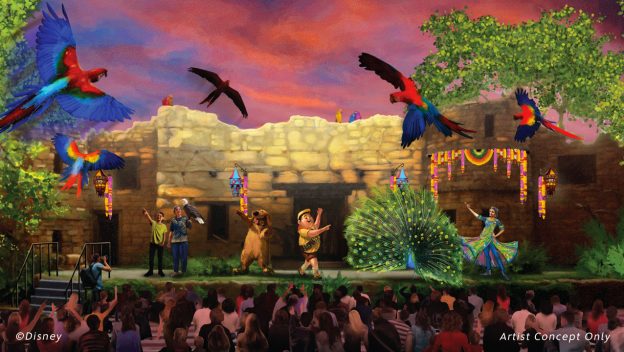 Of course they had to cover the other theme parks before we hit Toy Story Land, but there were some updates for some of our other favorite Disney locations.  In Magic Kingdom the Incredibles Dance Party will be happening this summer, and making her appearance for the very first time will be Edna Mode!

Over in Epcot, the Guardians of the Galaxy will perform a 25 minute rock concert at the America Gardens Theater featuring Star Lord, Gamora, and an alien band. I’m ready to rock out.

Animal Kingdom celebrates its 20th anniversary, and I so wish I could be there.  Animal Kingdom is my favorite park and I know they are going to do lots of cool stuff to celebrate.  The new bird show will premiere, called Up: a Bird Adventure. One cool thing is that they say it will take on a different feel at night.  Scrooge McDuck and Lunchpad McQuack will be around to do meet and greets in Dinoland this summer as well.

Disney Springs will finally see the opening of Wine Bar George, which features more than 100 wine selections.  And the Star Wars: Secrets of the Empire interactive experience by Void will also still be available.

Typhoon Lagoon also has an exciting event for the summer, called H2O Glow Nights.  It’s a glow party with Pixar characters based on the short Partysaurus Rex.  It will be every Thursday and Saturday evening until August 11th. A cool chance to hang out in the water park at night! 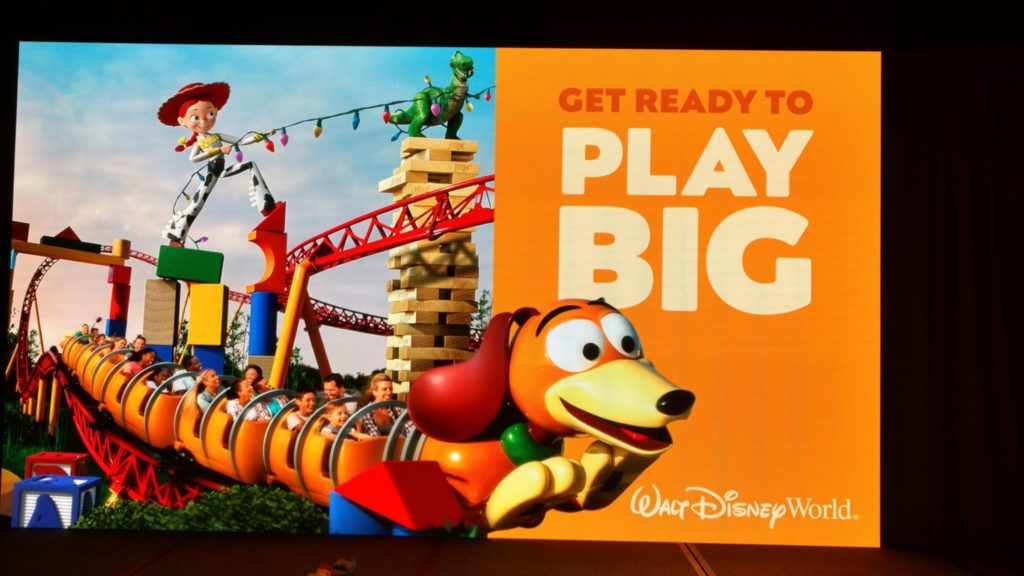 But finally, it was onto the reason why we were all there – Toy Story Land! Again, this wasn’t any new information, but it was still fun to hear about it all at once rather than in random blog posts.  The land will feature giant figures of our favorite toys so large you’d need a backpack the size of a school bus to carry them! The new Slinky Coaster looks fun, and will have a 38 inch height requirement.

The Alien Swirling Saucers look very similar to the Tow Mater ride in Disneyland. It has a 32 inch height requirement.  They also made the ambiguous statement that “you might get chosen by the claw”!

Toy Story Midway Mania has been expanded with a new entrance.  All three rides will be eligible for fastpass+, though no word yet on tiers. 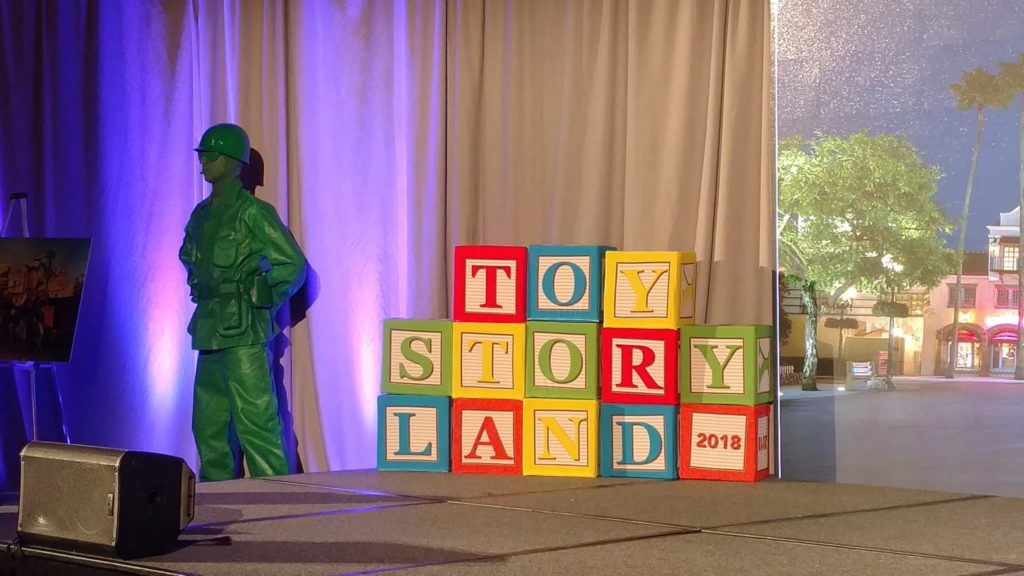 And finally, food!  Woody’s Lunch Box will be a quick service restaurant that is dining plan eligible and will serve breakfast, lunch, and dinner.  I’m looking forward to a full menu, but in the meantime we were told about a 3-cheese sandwich, a banana split yogurt parfait, and soda floats.

We were served dinner throughout the night, and though Disney is not involved in the preparing of the food it’s worth mentioning just because it was excellent. I thought the food selections were fittingly fun to go with the theme. We got a mozzarella salad, fried chicken and waffles with a mac and cheese cake and root beer braised beef, and a chocolate truffle ganache for dessert. I was so stuffed by the end of the night. 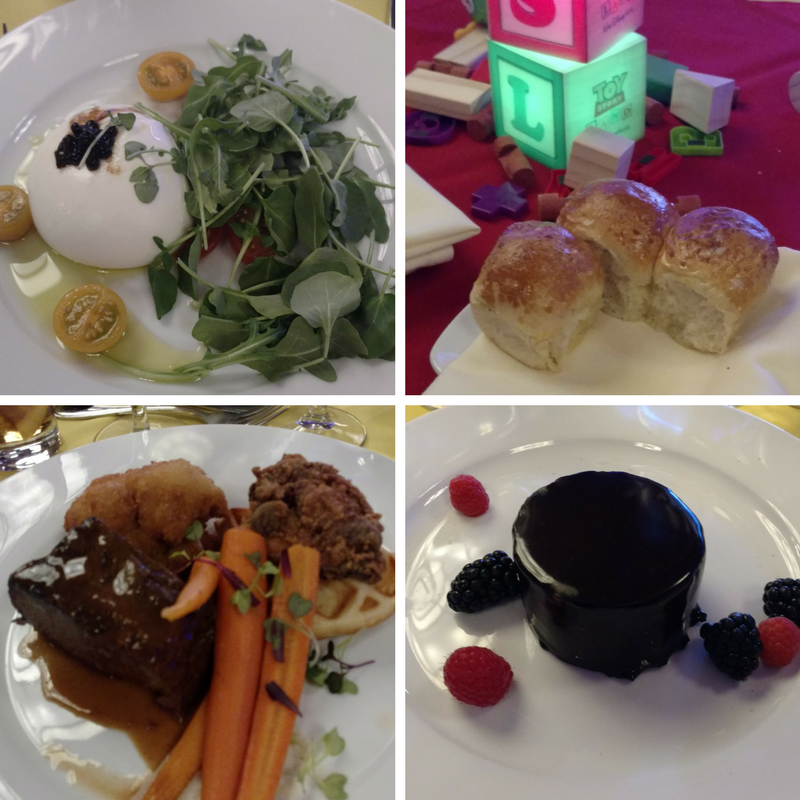 And in true Disney fashion we finished up the evening with a group sing-along to sing “You’ve Got a Friend in Me,” when Buzz and Woody came out on stage!  We were all able to take photos with them before we left for the night. 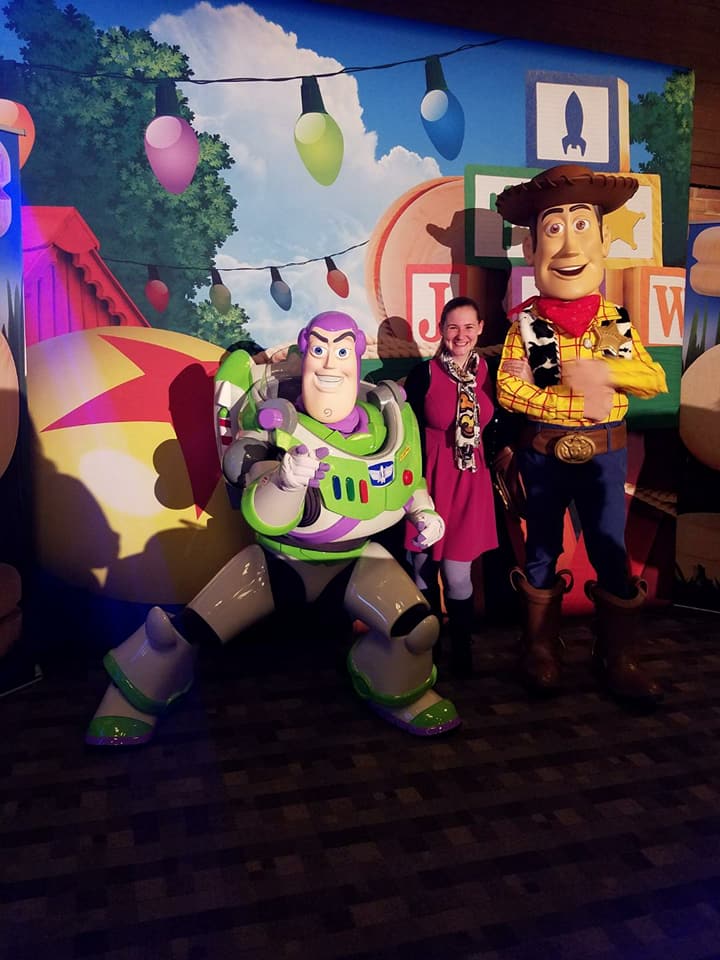 Being generous, Disney also gave us some parting gifts.  There were a couple of items to help advertise their “Incredible Summer,” but I thought it was a really fun touch that they put in one of the old red viewfinders will different disks that show that concept art of many of the things talked about that evening. 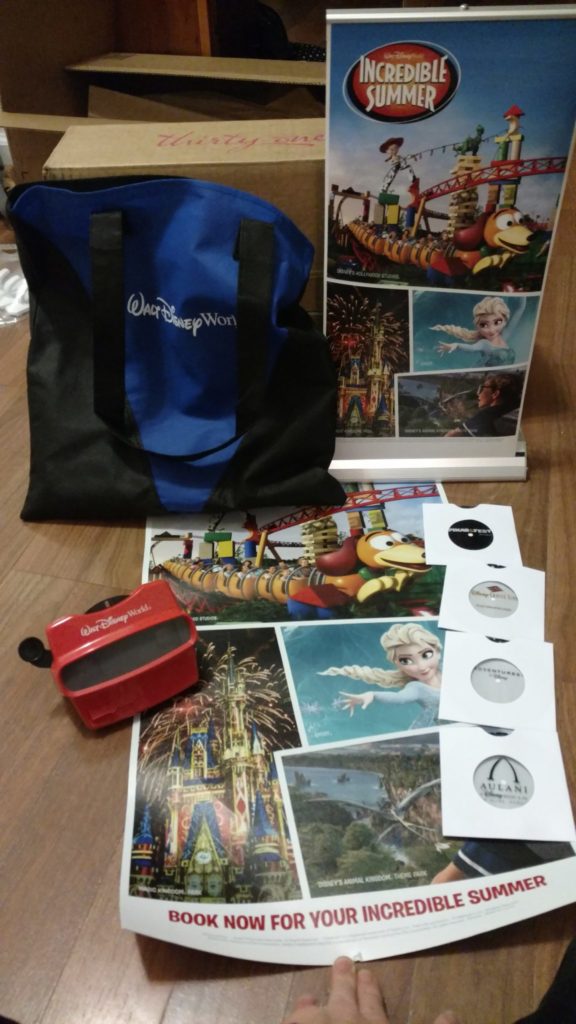 While these events don’t really give us much new information, I find them interesting, fun, and great for meeting other travel agents.  And it’s always great to get a little more Disney excitement – I’m looking forward to Toy Story Land even more now!

Are you excited for Toy Story Land?