You are here: Home / Disney Movies and TV / Thoughts on the Hunchback of Notre Dame

Highlights:  I love this movie.  I remember watching it a lot as a kid, though it wasn’t my favorite (The Lion King took that honor).  Esmeralda is a wonderful character.  She’s tough, but she’s also gentle and has a good heart.  She fights for what she believes in.  Watching this movie again, it occurred to me that even though it takes place in the 1400’s, it’s still got themes that are super relevant.  There’s a big focus on people being persecuted for being different, including by those in charge, and several people who stand up for what is right.  And even Frollo’s attitude towards Esmeralda is a representation of rape culture, when he sings “It’s not my fault / I’m not to blame / It is the gypsy girl / the witch who set this flame.”  He has inappropriate, lustful desires for her and blames it on her.  The ending was perfect, in my opinion. Although you cmight want Quasimodo to end up with Esmeralda, something about that would be really hard to buy.  She clearly has more chemistry with Phoebus, while Quasi comes off as almost like a child that she cares for.  However, that doesn’t mean it’s a sad ending for Quasimodo. He gets friends, and he gets to know that people finally see the real him and he’ll be able to go out into the world now. He doesn’t seem too upset about it by the end either.

Low points:  Umm, the gargoyles?  I get why they’re there.  This movie has a lot of dark, heavy themes, and you need some sort of comic relief.  But the gargoyles almost seem like too much in the other direction.  I think there are some other great funny moments built into the movie – Phoebus in particular has a lot good quips.  Even as a kid I don’t remember finding the gargoyles particularly funny.  Jason’s one complaint was that he felt that most of the characters were not realistic enough because they were too good and didn’t have faults, except for Quasimodo. I can kind of see what he’s saying but I really enjoy all of the characters and find them interesting.

The Music:  I feel like people have come to appreciate the music in this one a bit more since the stage musical version came out.  The music really is fantastic.   “Out There” is a perfect for Quasimodo – semi-sad, semi-happy, but pulsing with energy. When discussing Hercules, I mentioned that I never really liked his big song, “Go the Distance,” because something about it just fell flat or didn’t work. I feel like “Out There” is what “Go the Distance” could have and should have been. “God Help the Outcasts” is a beautiful, melancholy song.  And “Hellfire” is the creepiest villain song ever.  You’ve also got some great ensemble numbers like “The Bells of Notre Dame” and “Topsy Turvy.” 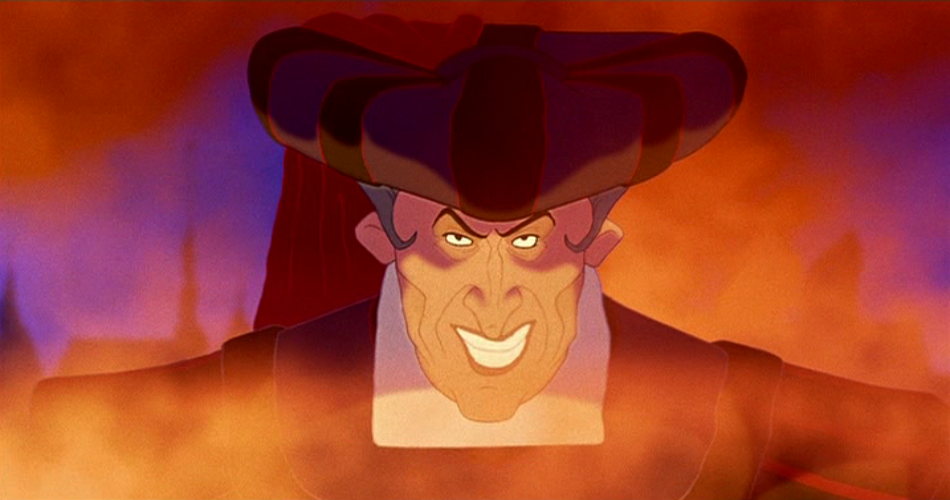 The Villain:  Frollo is really an evil villain, more evil than many of the others if only because he is completely real. He doesn’t have magical powers, spellbooks, or evil spirits to do his bidding for him. There is nothing supernatural about him. Instead he is a cruel, heartless man, treating people terribly because they are different from him, and doing it all in the name of God. There have been very real people like this throughout history, which just makes him a little more scary. He acts so nice and caring to everyone, but he is really terrible inside. He gets what he deserves. I find his death to be rather similar to what happens in The Lion King. They’re both on the ledge, and Frollo confesses that he killed Quasimodo’s mother. (Very reminiscent of Scar’s “I killed Mufasa”). However, instead of Frollo plunging to his death because of Quasimodo’s anger, he quotes the Bible, saying “God shall smite the wicked.” And then he is indeed smited. Score.

Fun Fact:  A stage musical of this movie was written and premiered in 1999 in Germany.  It later played in the United States in 2014 and 2015 in some pretty major venues, and there was a lot of talk of it heading to Broadway – but ultimately that didn’t happen.  The stage play makes some major changes to the movie that are closer to the original novel, including eliminating the gargoyles and including Esmeralda’s death.

I did an Esmeralda costume for the Disneyland half a few years ago!

Where in the World:  Quasimodo and friends don’t make too much of an appearance in WDW. You might be able to find the characters occasionally, but the one attraction dedicated to the movie, a show in MGM studios, didn’t stick around very long.  The movie did have a nice tribute in the fireworks show at Disneyland Paris.

Overall:  9.5 out of 10.  I know, I’m actually a little surprised myself that I rated it this highly!  But on this most recent rewatch I realized that I truly do love this movie.  All of the music, the themes, the characters.  I just connect with this one.

What do you think about the Hunchback of Notre Dame?