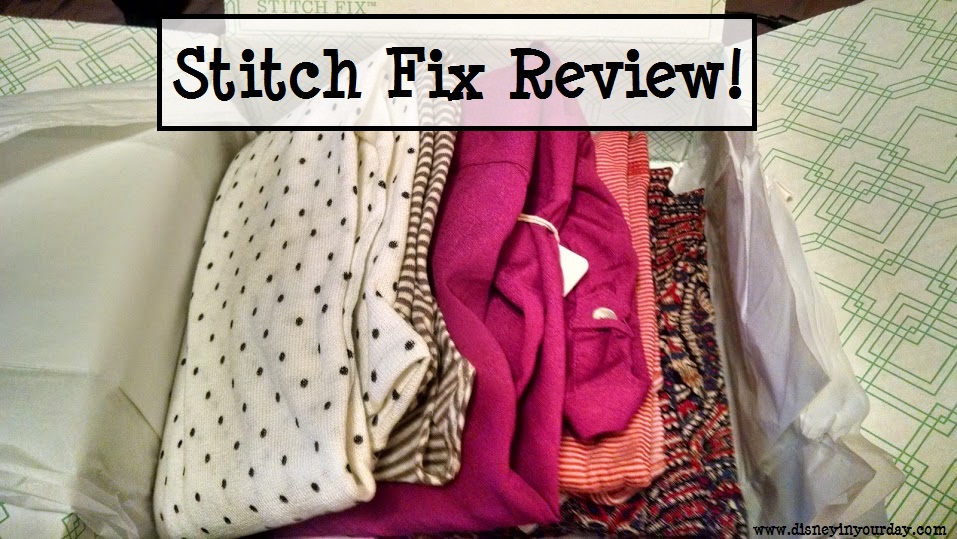 I can’t even tell you how much I’ve been looking forward to getting my second Stitch Fix.  It really is addicting!  I have been shamelessly reading blogs, reviews, and pinning lots of clothing all over Pinterest.  When it finally arrived I was for the most part happy with what I got!  Here’s a look: 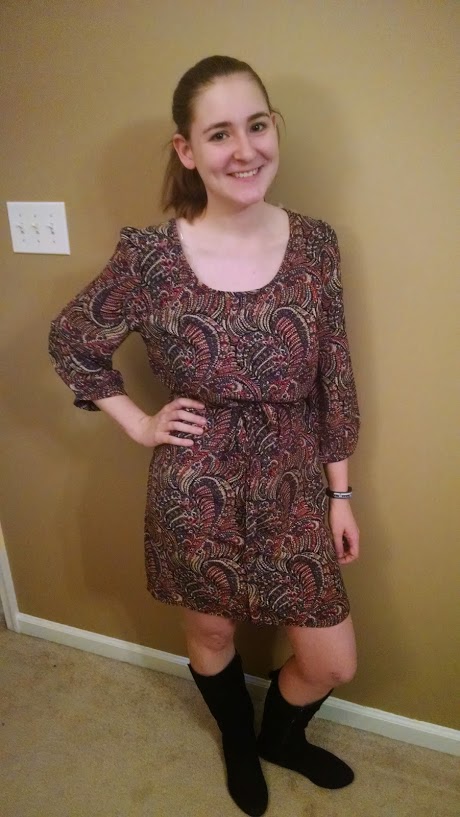 I saw pictures of this online and I wasn’t sure what I thought about it.  When I saw it in person it was absolutely huge.  I had changed my shirt size from medium to small after last time, but left my dress size a medium because the medium dress they sent fit.  Well, this one was too big!  And it’s a shame, because once I put it on I actually really liked it.  I had been hoping for a long sleeve dress for the winter, and it would be super cute with a jacket and boots.  But even tied back there was just way too much fabric.  It was really loose around the neck area too and was slipping a lot.  I’m sad to have to send this one back. 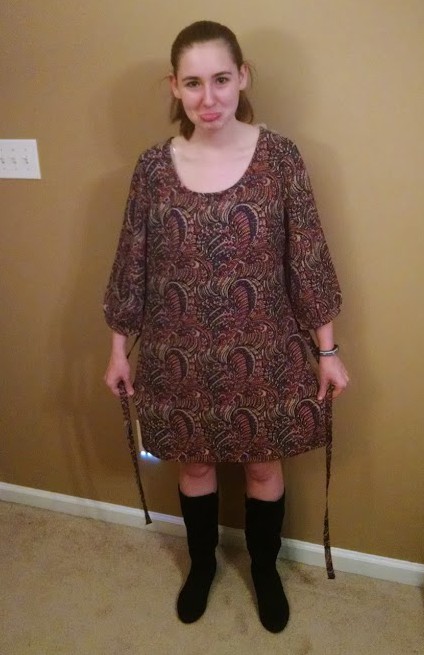 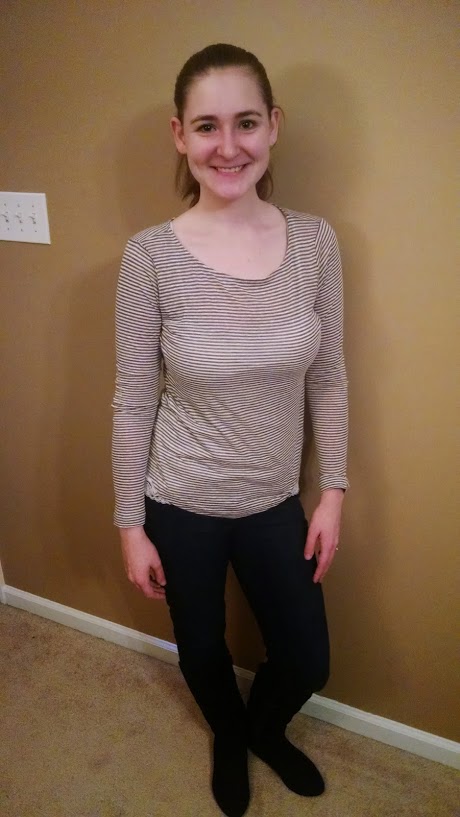 When I saw the words “elbow patch” I was immediately turned off.  That’s just not a look I’m into.  Luckily the shirt only had the outline of an elbow patch, not an actual patch.  Unluckily, the shirt itself was just boring.  I like color, and something I can wear to work and at home, and this just wasn’t for me – it’s simple and maybe I would pay like $15 for it, but $48?  No way.  Plus, it was totally see through, so I had to put a tank on underneath.  Sent Back. 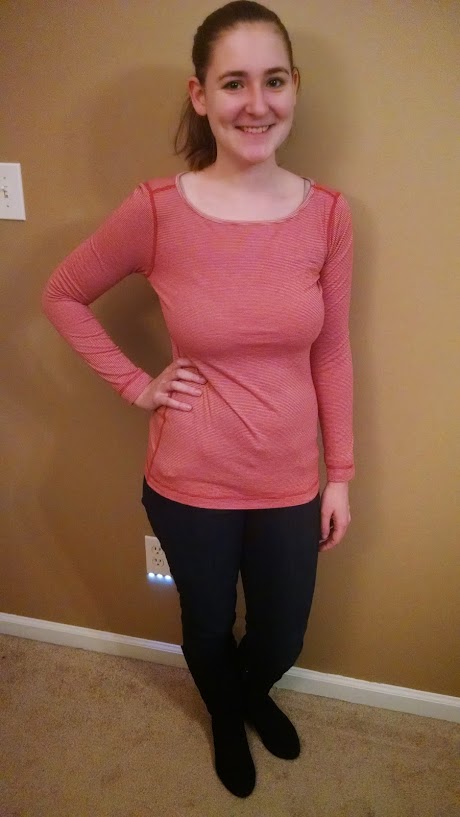 This is a reversible shirt, but only in the sense that one side had thicker red stripes with thin white ones, and the other side was thicker white with thin red.  It was a bit casual looking for what I’m trying to get out of my Stitch Fix boxes.  And it was too tight – the downfall of being in between a size small and medium, I guess.  The sleeves and the top were very tight.  It’s also a boat neck, which means that my bra straps show – which I find inconvenient. Sent back. 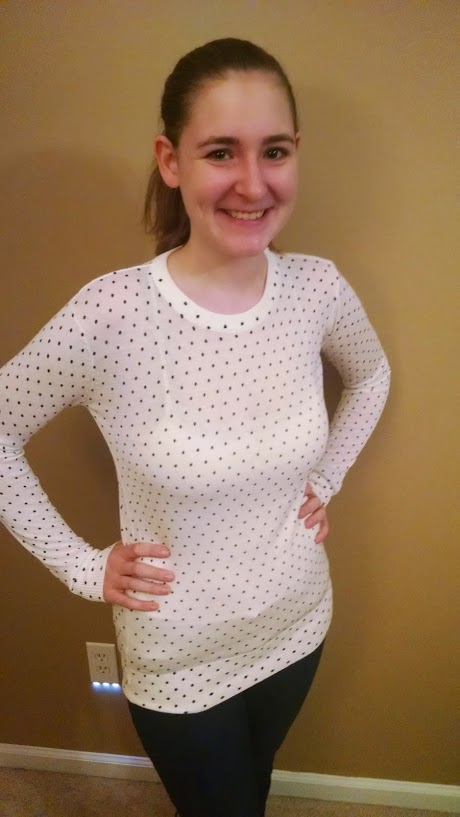 When I saw my box this was the thing that excited me most.  It’s not something I would pick out for myself because I usually go for bright colors, but I really liked it.  It’s a sweater but thin enough to work on its own for the fall, and you could easily put a black cardigan over it.  Only problem – it was super see through.  I wore a white tank top underneath for this picture, but my friends suggested a black one.  I tried that later and it looked much better.  I think it’s cute enough that I don’t mind wearing a tank under it, so I’m keeping it! 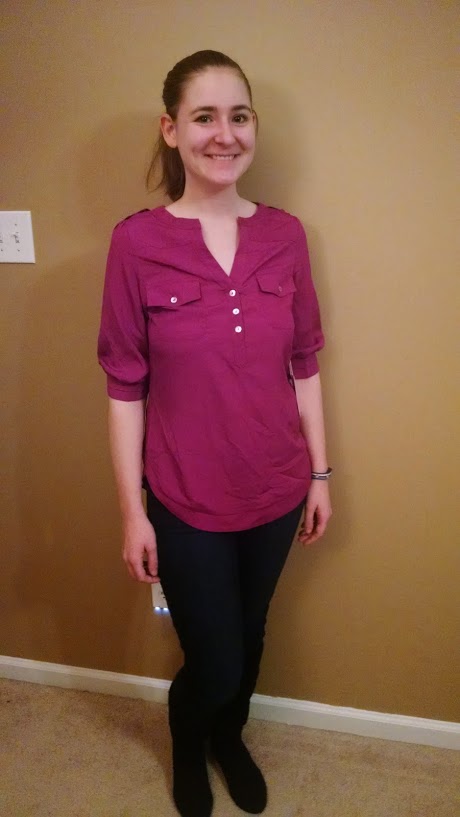 I had asked if it was possible to get the Colibri shirt from last time in a small, but it wasn’t available, so they sent this similar one instead.  I do like it, though I liked the other shirt more – this one doesn’t have long sleeves, and it’s also $10 more.  But I need some more work appropriate shirts, and I like how this one looks on me, so I decided to keep it!  Will definitely be pairing it with some cardigans for winter.

Overall I was very pleased with this second fix!  I can’t wait to get my third.  I was really tempted to switch to monthly fixes, instead of every other month… but then I realized if I did that now my next one would arrive right around Christmas, and that sounds like terrible timing.  So at least for now I’ll be waiting til January!

If you’re interested in signing up for your own Fix, I would love it if you’d use my referral link – it would give me a $25 credit to use on a future fix, and doesn’t cost you anything.  I used a friend’s link when I signed up for mine so I could help her out, so I know it’s much appreciated!