You are here: Home / Disney Movies and TV / Who are the best Disney couples?

A look at the best Disney couples in various Disney movies: 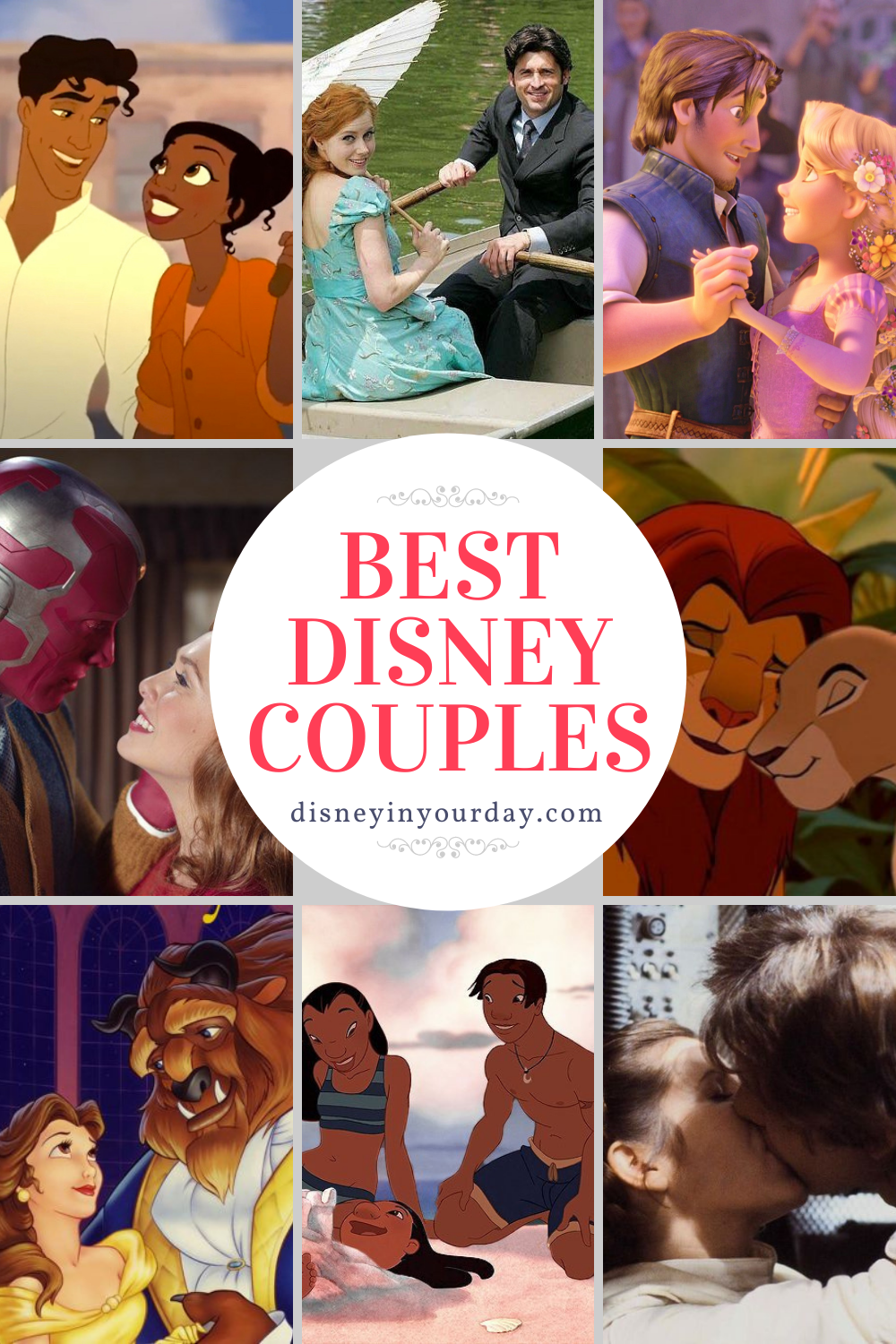 With Valentine’s Day coming up, I thought it would be a good time to talk about the best Disney couples. Love is in the air, and I wanted to do a spotlight on some Disney couples.  They’re not exactly ranked or anything, but just some fun ones I wanted to feature! 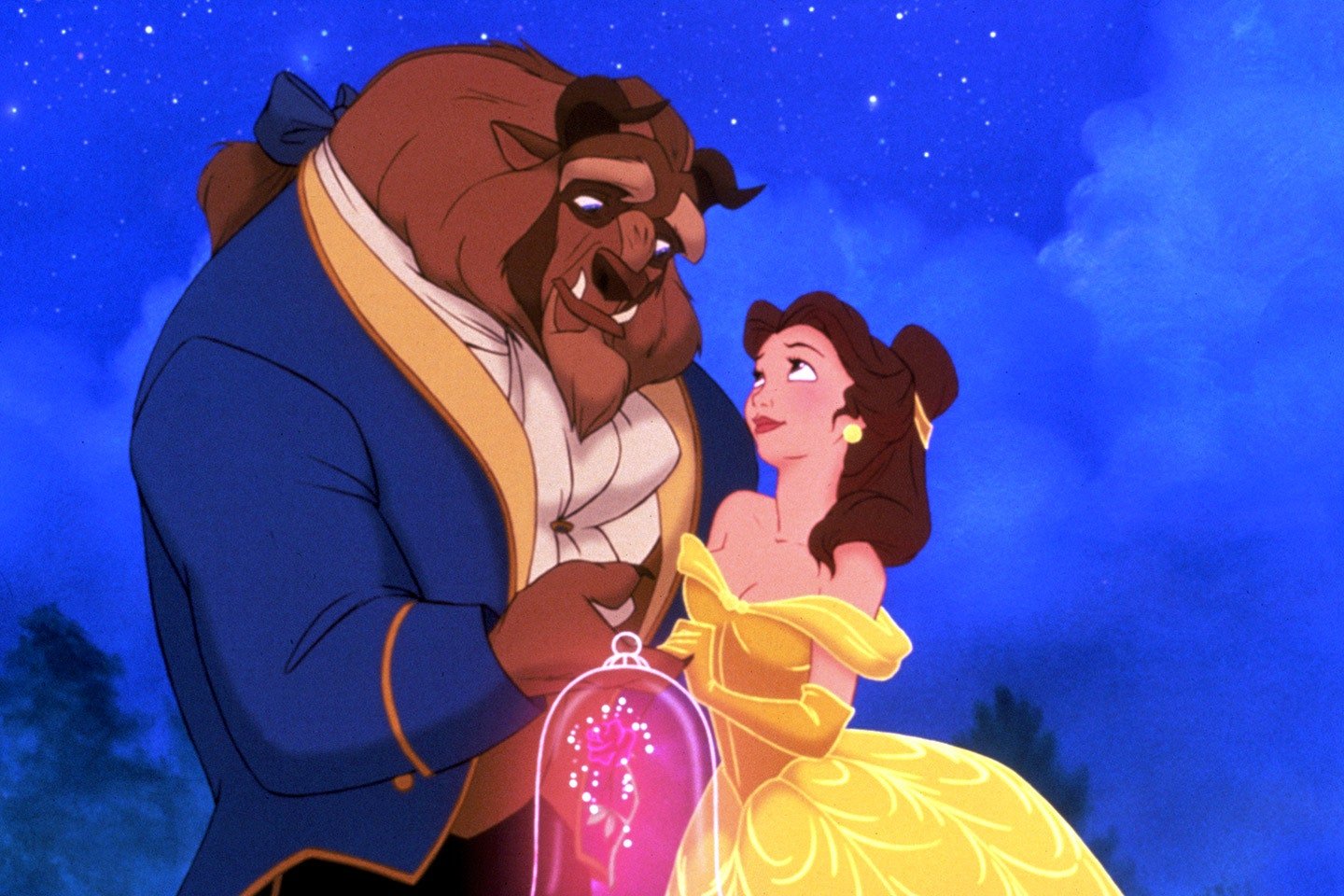 The Beast and Belle

This is one of my personal favorite couples.  I know some people claim “Stockholm Syndrome,” but personally I think it goes beyond that.  Their relationship is beautiful because it’s about more than just appearances.  And not only does it go above appearances, but Belle is willing to get to know the Beast despite the fact that his attitude is pretty poor in the beginning too.  They were persistent in getting their relationship to work, and unlike a lot of other Disney couples, it wasn’t “love at first sight” for them and getting married after they barely knew each other.  Given what they’ve been through, you know there’s no problems they can’t handle as a couple.

It doesn’t really get more classic than this couple.  Minnie is sweet and fun, and the perfect complement to Mickey.  She stands by him despite some of the crazy situations that he gets himself into.  But they also don’t fill the stereotypical role of the sweet, mild-mannered woman and outgoing man.  Instead, Minnie has a feisty side to her, and speaks up to Mickey when she feels that she needs to.  Mickey brings fun and excitement to her life, and she brings a level-headedness and maturity to his.  That’s working well together.

Lots of good relationships start with the basis of friendship, and Simba and Nala are the perfect example of that.  They get along really well as kids, spending all their time together and having fun together.  Though they’re separated for awhile, once they are reunited it’s like no time has passed at all – except instead of being just friends, there’s a romantic aspect to their relationship as well.  Nala and Simba truly bring out the best in each other – she convinces him to take his rightful place, and once he does so he is inspiring to all.  They may have already been betrothed since birth, but it just goes to show that they were truly meant to be together. 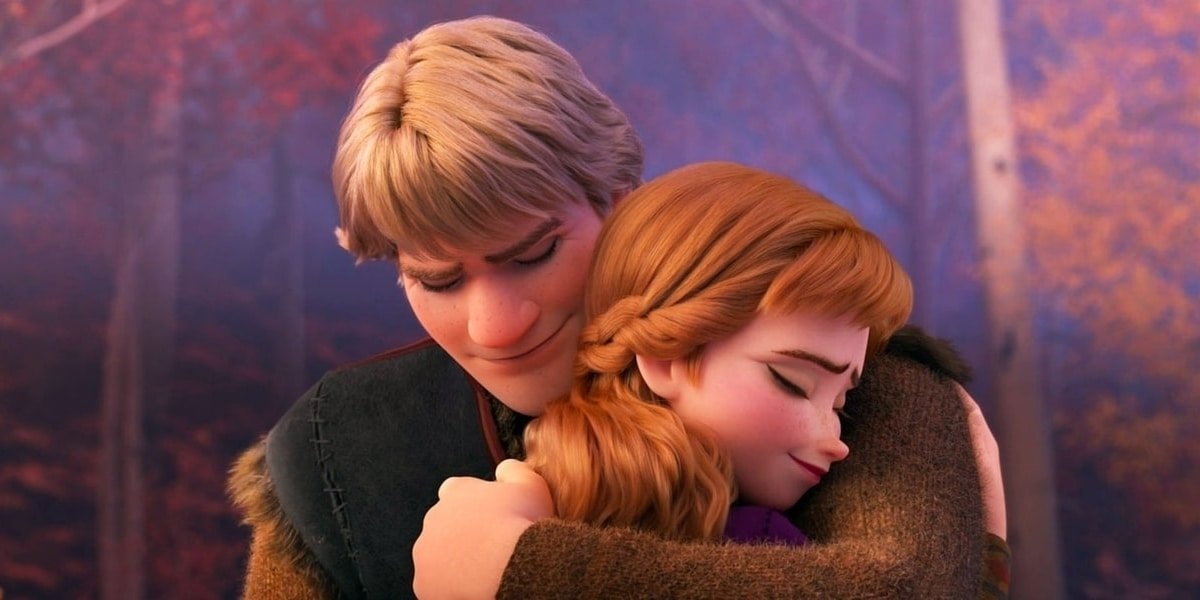 Absolutely one of the best modern Disney couples. I’m glad to see a couple of Anna Kristoff as role models for younger people. Kristoff shows male vulnerability that we don’t often see these days. It was not “love at first sight” for these two but they still built a solid relationship. They have their differences but at the end of the day they are there for each other. Kristoff embraces her family and loves Elsa as his own sister. “My love is not fragile.” 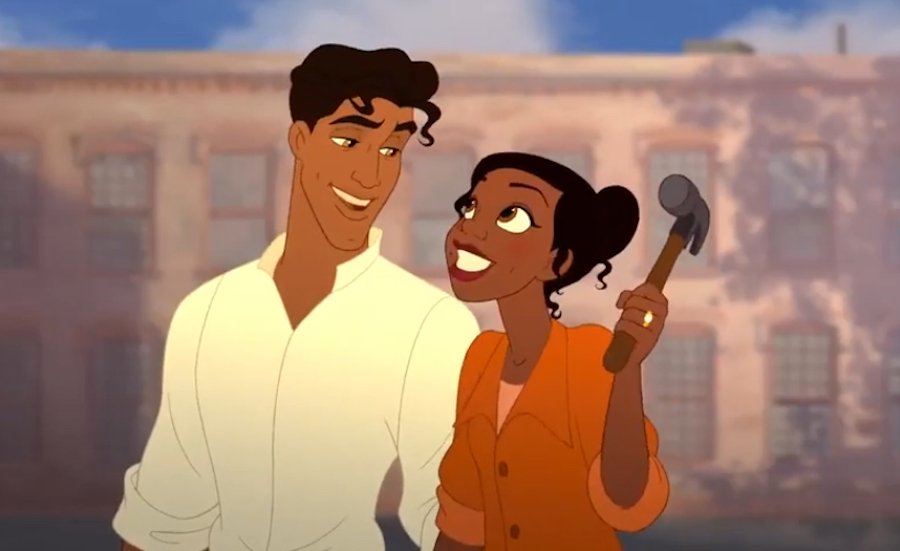 Love these two! Neither of them were looking for love when they met each other and indeed, they didn’t seem to even like each other that much at first impression. But despite their differences they worked together and helped the other to see things in a different way. This is a couple that really balances each other well. 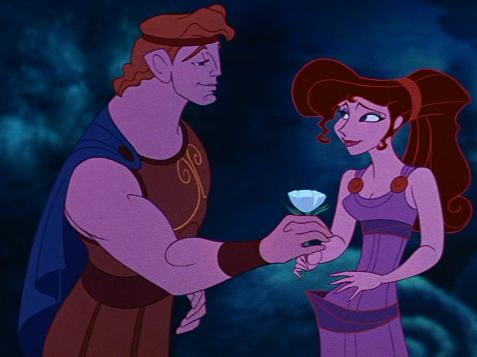 I’ve always loved the relationship between Hercules and Megara, though I do feel that this one isn’t the first one you’d think of!  They overcome so many obstacles together.  She falls in love with him despite swearing never to love again.  He loves her even after learning she’s working for Hades.  She dies for him, he saves her from that death by risking his own life.  And then at the end Hercules is offered the chance to become a god, which he turns down so he can stay with Meg.  If that’s not love I don’t know what is. 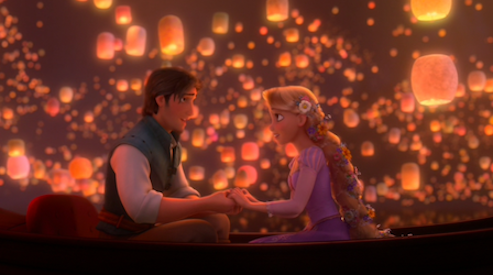 Rapunzel and Flynn are another great pairing I really like. They are similar to Tiana and Naveen in that they are very different but this just brings out the best in each other. Neither are looking for love when they meet each other yet they both find it. The lantern scene on the boat is one of the most beautiful in a Disney movie and the quote “You were my dream” “And you were mine” is one of the most emotional. 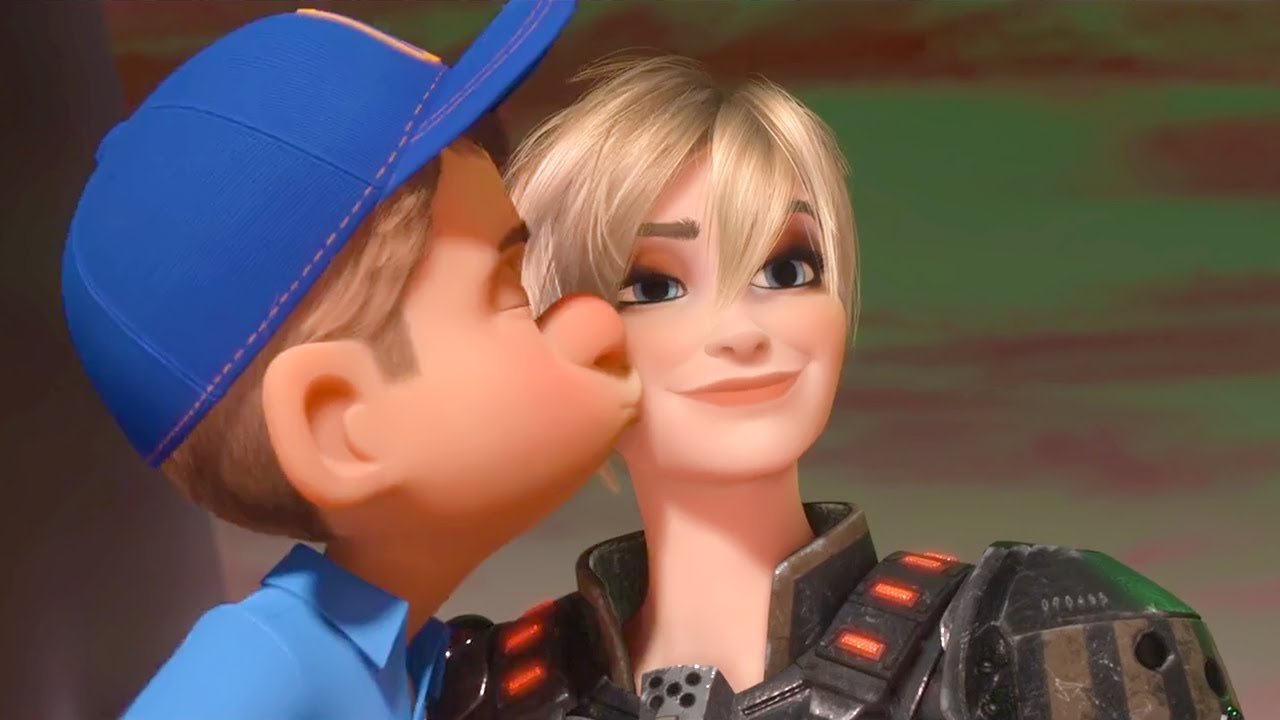 They say opposites attract, and nowhere does that seem more true than with Fix-It Felix and Sergeant Calhoun from Wreck-It Ralph. They must be a pretty strong couple because Calhoun is literally programmed to have the most tragic backstory when it comes to relationships – so understandably she is hesitant to ever get involved in some again. But Felix and his charm win her over and they make an odd but adorable couple. 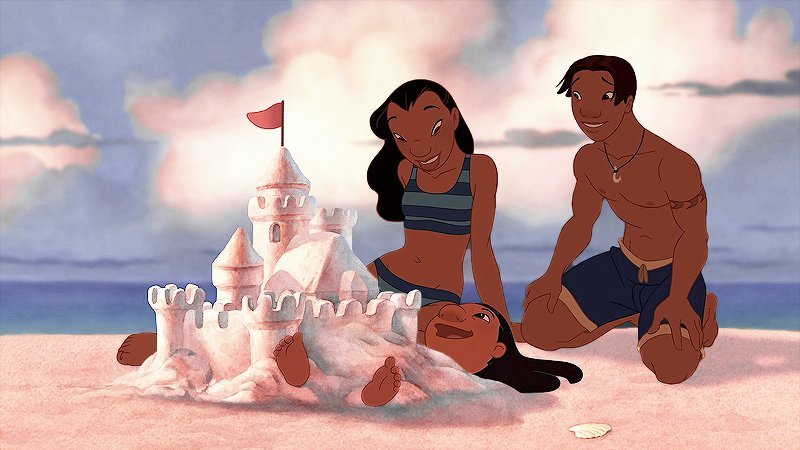 This is a pretty underrated couple, but I think Nani and David from Lilo and Stitch deserve some credit! Even when Nani is trying to balance a job, taking care of Lilo, and dealing with Stitch, David is patient and compassionate. Their relationship has a great basis in a very strong friendship – in fact, they are mostly just friends in the first movie and it’s not even until the sequel that they become something more. 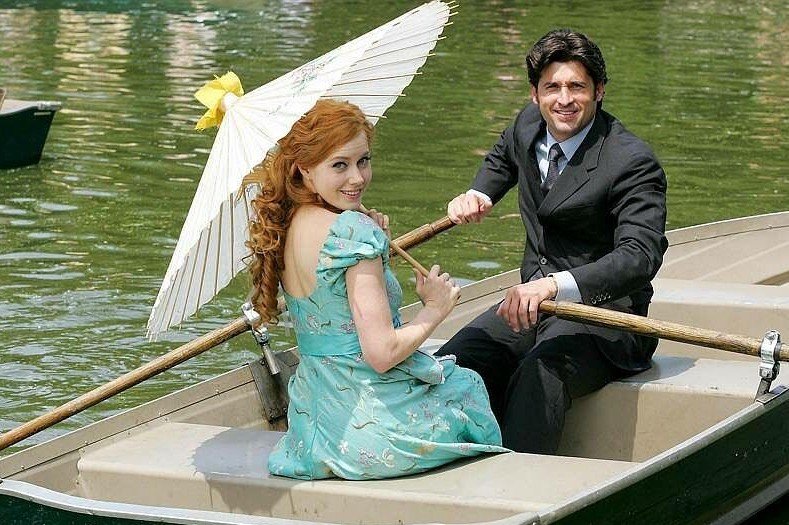 I wanted to include some couples that aren’t from the typical animated movies, so next we have Giselle and Robert from Enchanted. Giselle had to choose between Prince Edward and Robert, but ultimately she ends up with Robert. While their relationship certainly wasn’t love at first sight, it shows how much both of them grew throughout the movie to end up together. Giselle helps bring some excitement and fun to Robert’s life, and Robert helps Giselle learn about how complex life can be and her potential to be more than just a princess destined to marry her “prince Charming.” 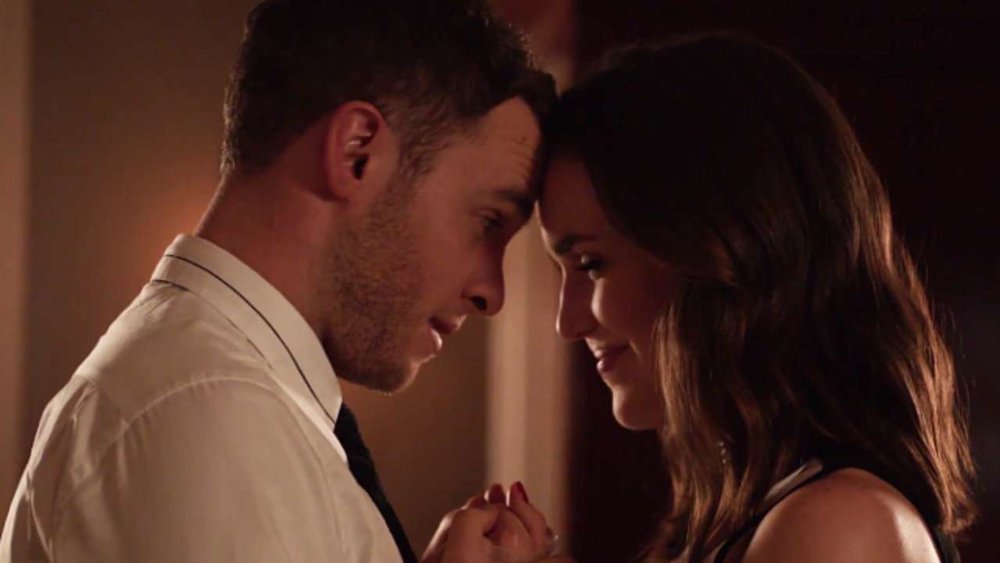 There might be more well known couples from the Marvel universe, but to me one of the strongest couples they’ve produced so far is Leo Fitz and Jenna Simmons, lovingly known as FitzSimmons. If you’re not familiar with them it’s because they aren’t in the movies – they are from the TV Show Agents of S.H.I.E.L.D. They are both scientists for SHIELD and are both brilliant so they can keep up with each other. In many ways FitzSimmons have a cursed relationship. They are constantly being separated (physically, through time, due to brain control, etc.). Yet it only makes them stronger as a couple and I’m not sure I’ve ever rooted for two people to actually get to be together more. 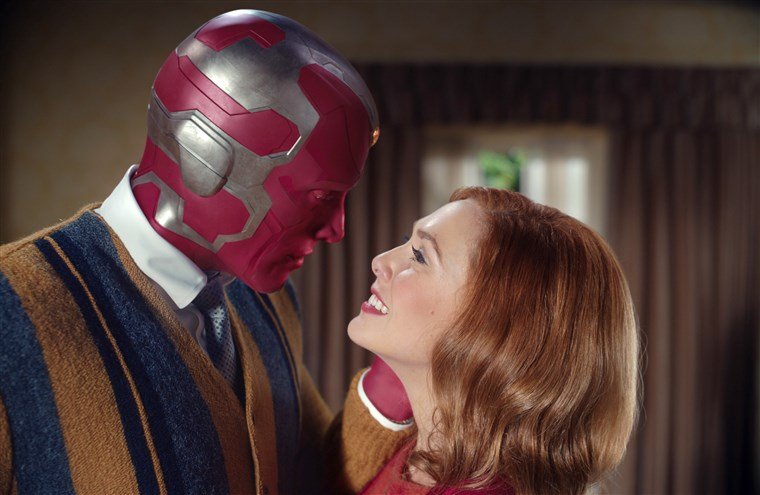 We saw their relationship start to blossom in the MCU, only to have a heartbreaking end. Yet now we have them back in WandaVision, a new show on Disney+, and they are just such a loveable couple. We don’t yet know what’s happening in the show or what is actually reality, but I think most of us are rooting for these two. 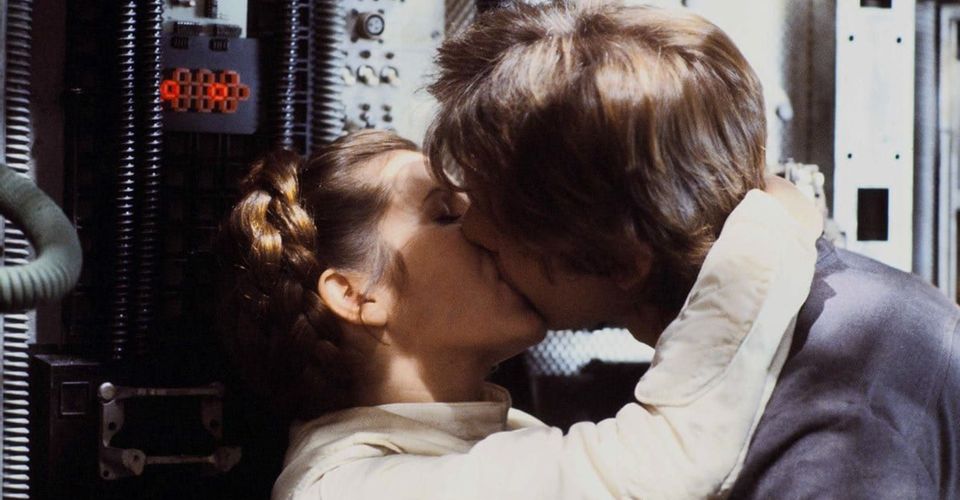 If I’m going to include any Star Wars couple on this list, Princess Leia and Han Solo are the most classic. Even if things ultimately didn’t work out between them, seeing the love in the original trilogy is great.  Despite being at odds at first they grow to truly care. And of course they give us one of the most iconic lines: “I love you.” “I know.” 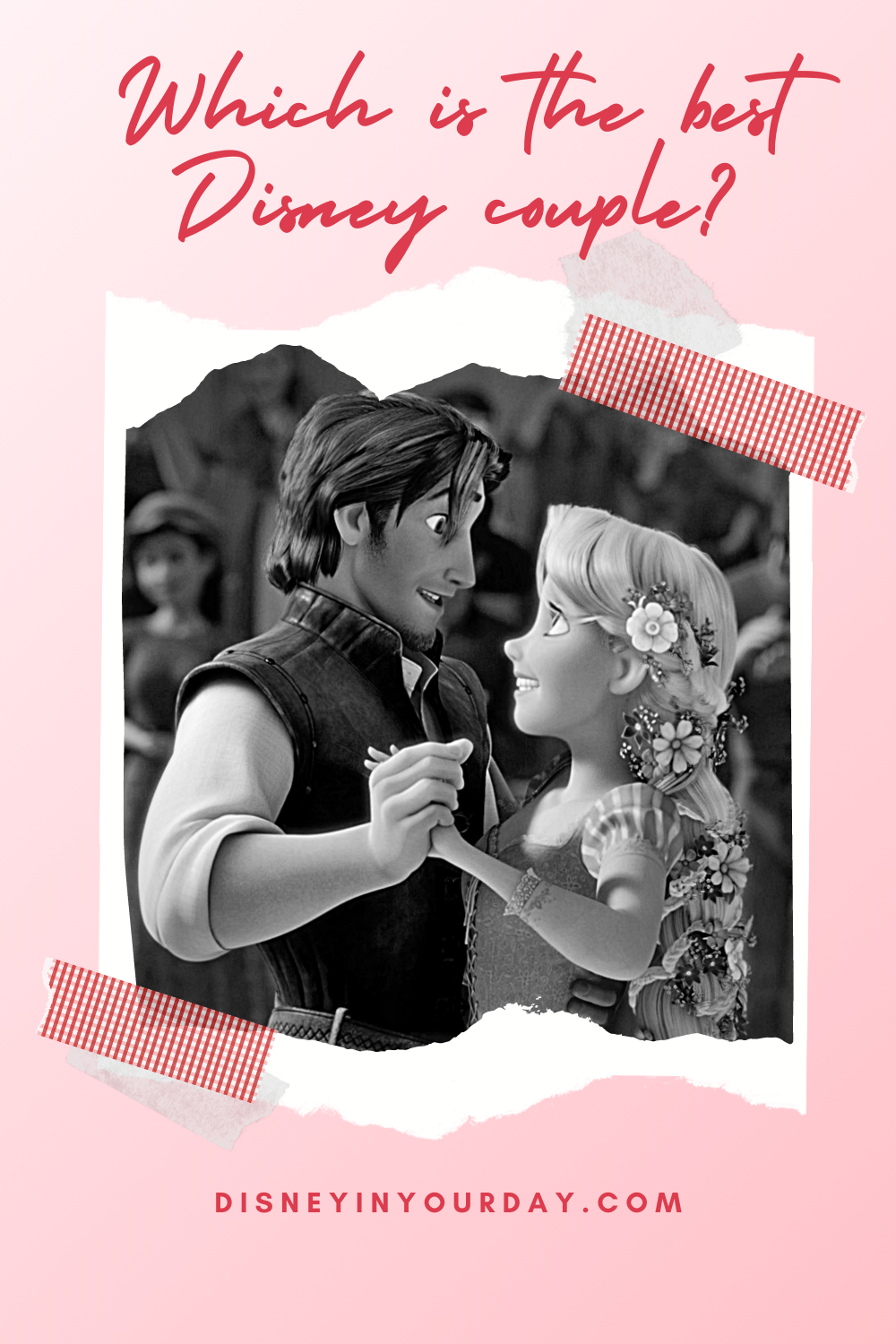