When I take a trip to Disney World I normally like to wear some of the Disney shirts or dresses that I have.  However, I decided to do something a little bit different this time and put together a theme park appropriate Disney Bound!  If you haven’t heard of Disney Bounding,  it’s basically when you wear normal clothing but in the color or style of a Disney character.  Because this was a last minute idea, I went with a relatively easy one – Snow White.

Snow White is a fun one to Disney Bound because her colors are fairly simple, but they are also rather recognizable.  I actually got most of my outfit at Primark, which is an amazing store with cute clothes at super low prices.  I believe there are only two in the US right now (and I’m lucky enough to live close to one).  But I’ve found some similar options on Amazon for you! 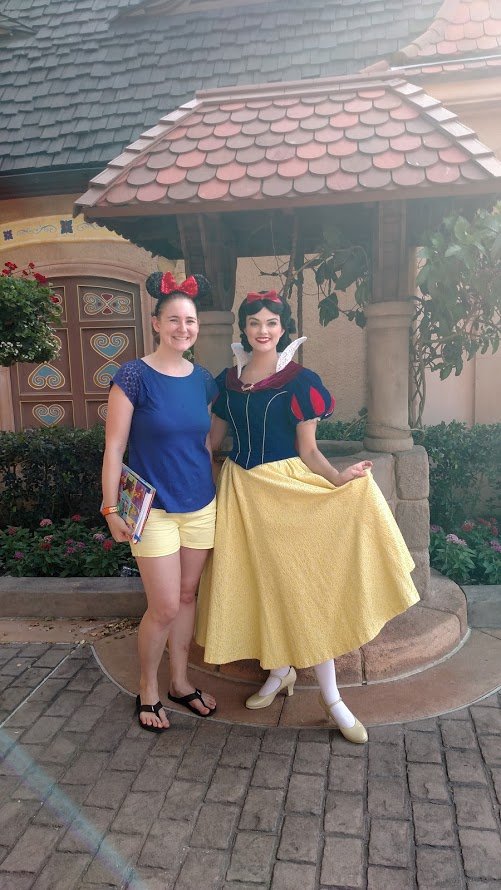 Because this was for a theme park trip, I wanted to do a casual look.  I found yellow shorts for the bottoms and a royal blue shirt for the top.  The other iconic part of Snow White’s look is her red bow.  Since I already had my Minnie ears with the red bow I just went with that!

I wore my comfy flip flops for walking, but if you really wanted to recreate this look I tried to get a glimpse of her feet in the movie.  It’s hard to tell but at least from some shots it looks like she’s wearing gray flats.  Finally I added an apple necklace to really give it that Snow White feel.

How would you put together a Snow White Disney Bound?  What are some other characters you’d like to see done this way?