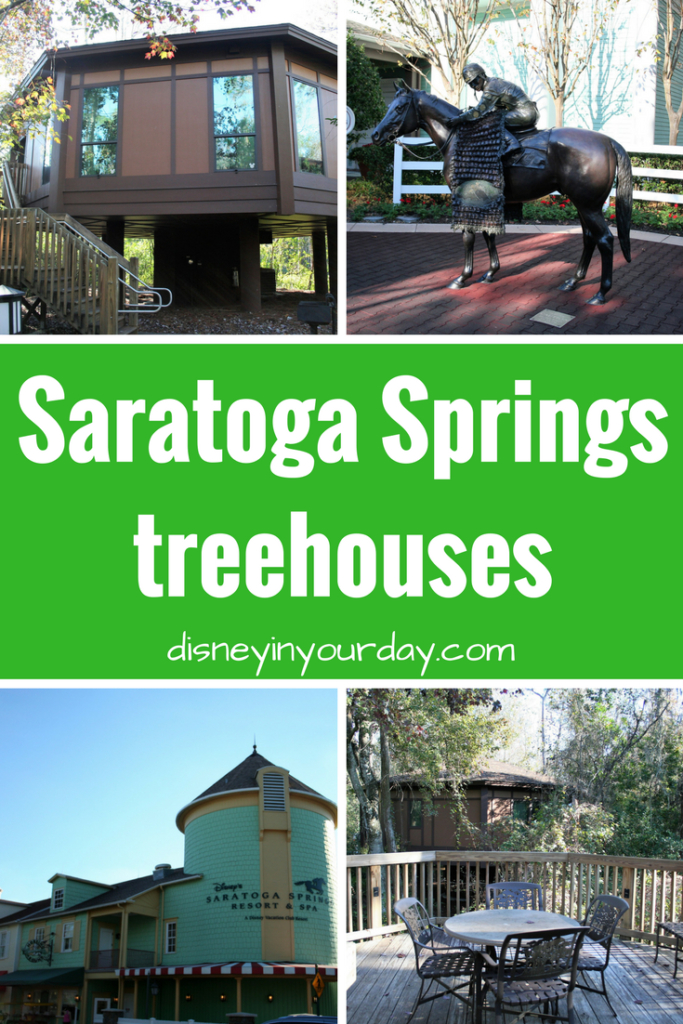 If you’ve ever taken the boat to Disney Springs, odds are you’ve seen the treehouses at Saratoga Springs from a distance.  It’s one of those places that just looks so cool and you think about how neat it would be to stay there – on this past trip, since we had a group of 7 people going, we were able to do it! 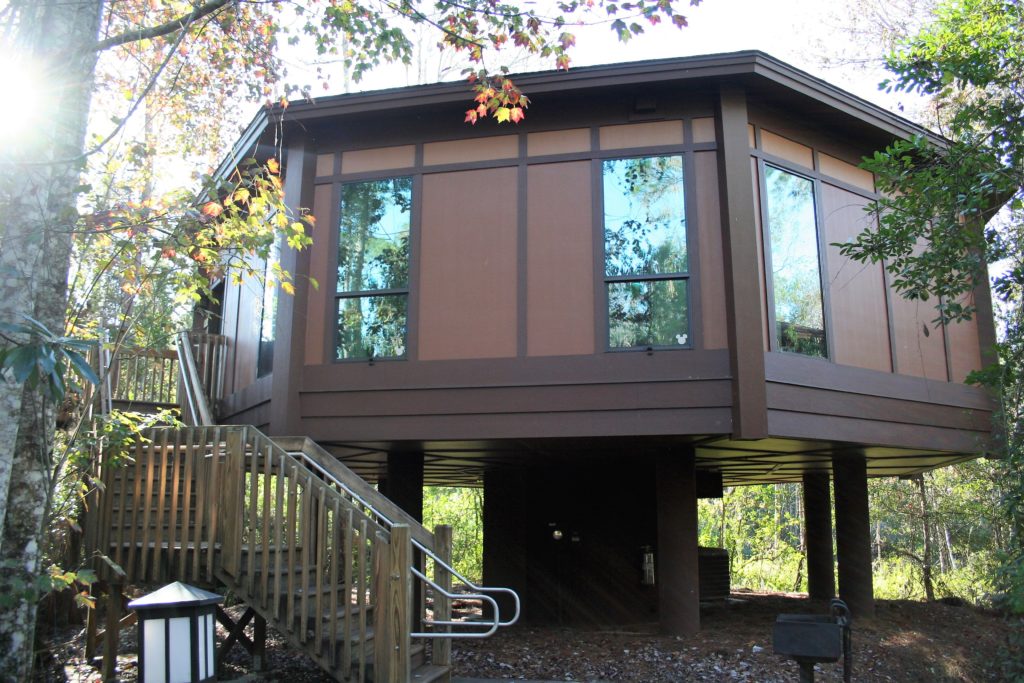 We rented DVC points for this past trip and everything went very smoothly.  The treehouses can sleep up to 9 – there are 2 queen beds, a set of bunk beds, and pull out couch that holds two, and a recliner chair that unfolds to sleep 1.  The nice thing is that there are three separate bedrooms – one for each queen bed, one with the bunk beds, and then the couch/chair in the living room.  Lots of space for everyone! 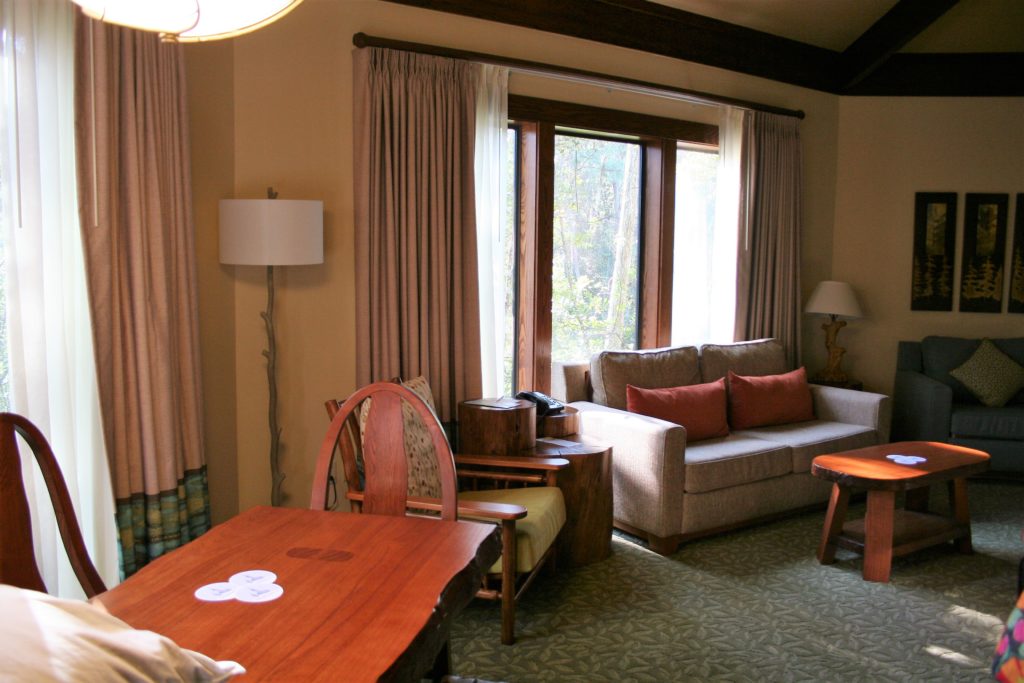 There are also two bathrooms which is nice when you have that many people.  Then the rest of the treehouse is made up of a large living/dining area and small kitchen.  We were very comfortable there for 4 nights!  There is an outdoor dining area too, but it was too cold that weekend to make much use of it. 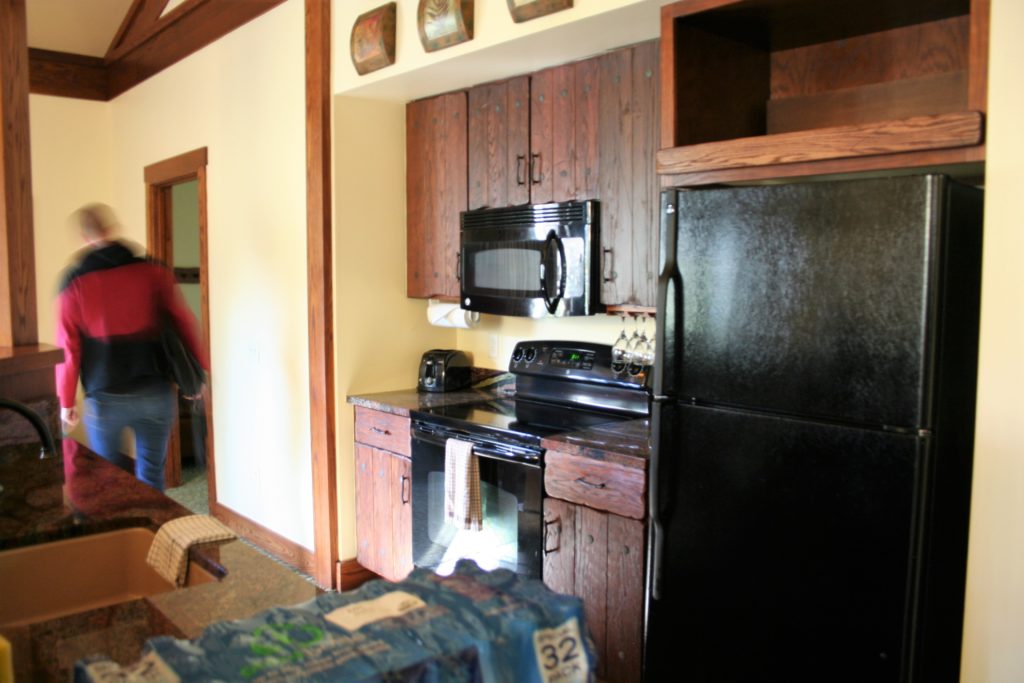 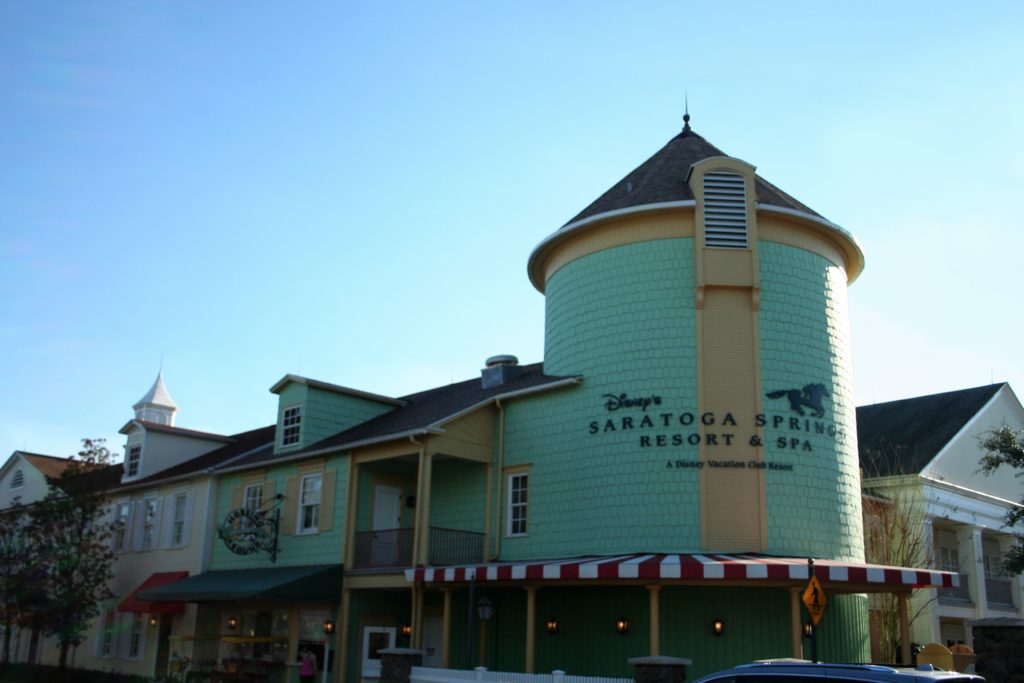 I had never stayed at Saratoga Springs before because the theme didn’t appeal strongly to me, but it was actually much more beautiful than I was expecting.  The main buildings and walkways are quite nice, and the treehouses are very secluded.  It’s a lovely area.  Saratoga definitely has a peaceful feeling, at least being in the treehouses and walking around there did!

The theme is the city of Saratoga Springs and therefore horse racing, which is kind of funny theme for a Disney resort.  But they do a good job with it – I like the late 1800’s style of the buildings and the colors. 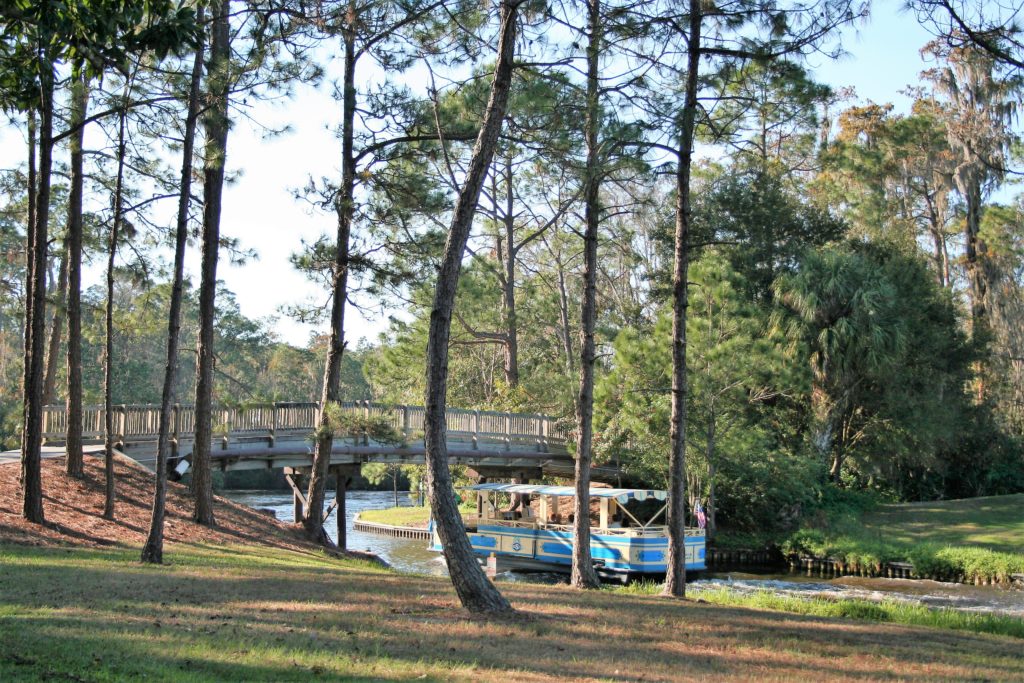 The biggest bummer about staying at the treehouses was probably transportation.  If you have a car there are parking spots and you’d be fine.  Without one, it’s tough.  In order to get to any of the parks you have to take a bus from the main area.  To get to the main area you have to take a bus from the treehouses.  One morning it took us over 2 hours to get from our treehouse to Magic Kingdom because we had to wait so long for 2 different buses.  We discovered there was a walking path from the treehouses to the Grandstand bus stop, which we used most of the time, but it wasn’t always convenient when we were tired, it was raining, or say one of us had just ran 26.2 miles and didn’t want to walk extra 😉

On the plus side, Saratoga Springs has boats that go to Disney Springs.  It’s close and a really nice ride.  There was a boat dock right near our treehouse which was convenient for us too. 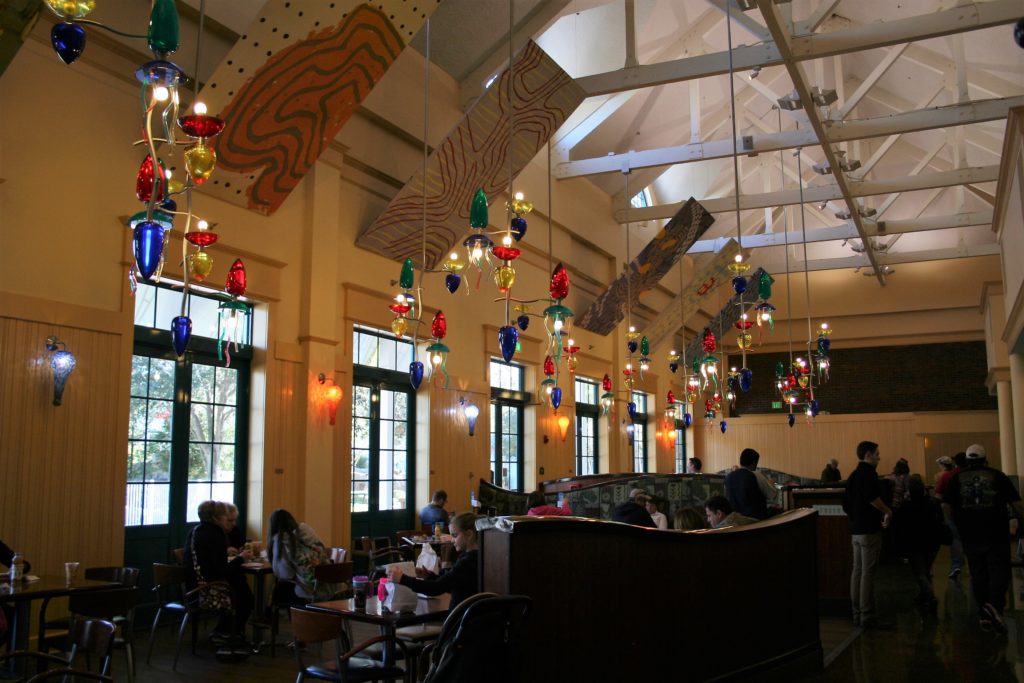 I didn’t eat at Saratoga Springs at all so I can’t speak towards the food.  But they do have a quick service dining location called Artist’s Palette and a sit down restaurant called the Turf Club.  My friends did get breakfast at Artist’s Palette and were pleased they had Mickey waffles!  There is no main building with food or anything at the treehouses, but on the flip side you do have the full kitchen.  We had groceries delivered so that was convenient too. 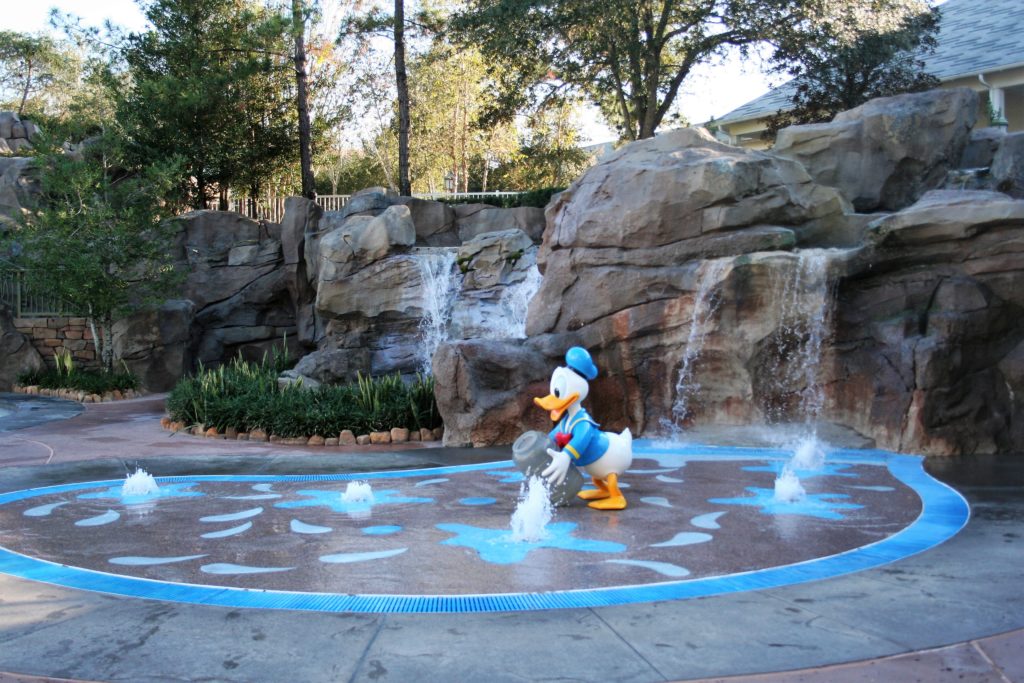 There are a number of pools around the resort, some large and some small.  There are water slides at the main pool as well as a kids’ splash area.  The treehouses have their own pool area, which includes its own hot tub!  So that convenience of not having to go all the way down to the main building to use the pool or hot tub was really nice.

Have you ever stayed at Saratoga Springs?  What do you think of it?