The first full day of the cruise was our day in Key West. We were lucky to have pretty much perfect weather, despite predictions looking a little gloomy for awhile.  We had signed up for an excursion, the Key Lime bike tour. It had been awhile since I’d been on a bike, but it is true that it’s not really something you forget.  Key West is a good place to ride around. It’s a small island, there are interesting things to see, and the traffic is very forgiving to cyclists. Key West was a really great place and one I’d love to visit again for a longer period of time. If you’re going to Disney World you could even plan a Key West road trip! 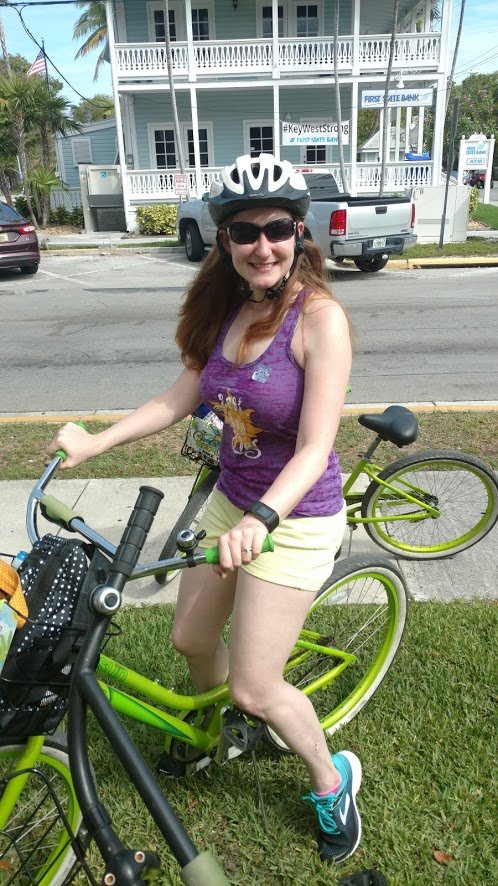 The tour hits all of the major highlights of the island.  The first two hours involved mostly our guide talking and not much riding. We would ride a block or two, then get off and all listen while he told us some information or stories for awhile. Then repeat. We had both been hoping that it would be more riding and less talking. Some of it was interesting, but there were a lot of random stories that I’m not sure we really needed.  The second half was better, as it was mostly riding with a little bit of talking.  Now that I know the basics of Key West I might rent a bike to ride around, but I don’t need the full tour.  But it was a good way to at least briefly see the major things.  One that I’m glad we got to was the southern most point of the continental US – 90 miles to Cuba! 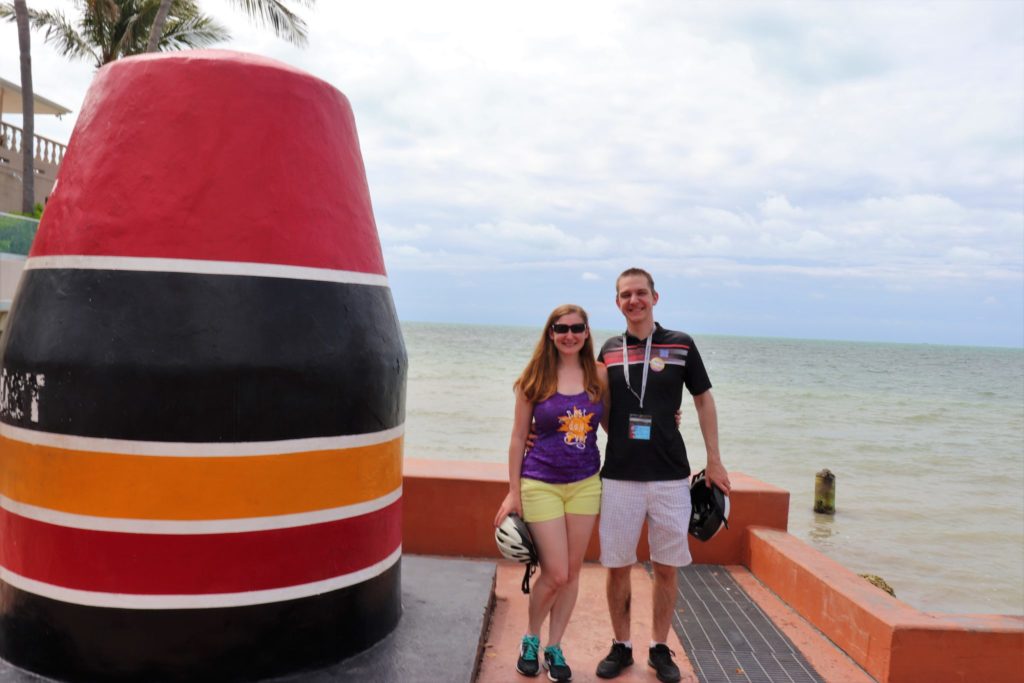 We finished the bike ride around noon and they ended it right by a shop that served us free key lime pie as part of the tour. Not surprisingly, this key lime pie in Key West was the best I’ve ever tasted.  They serve it frozen – it’s so hot there that it’s often the preferred way to enjoy it. And it was excellent. 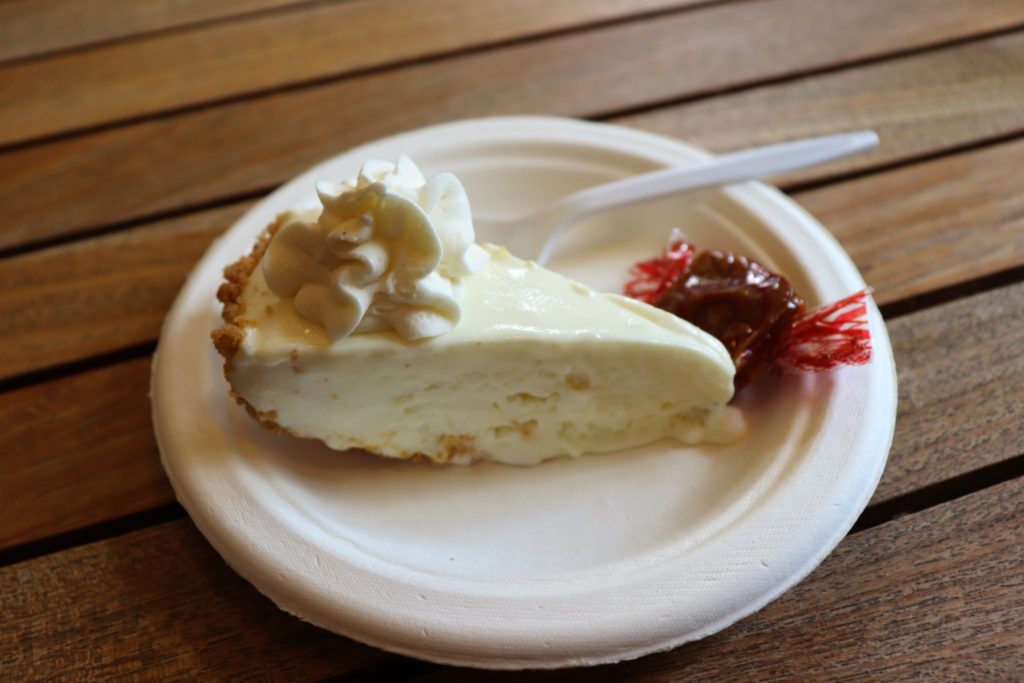 We still had a few hours on Key West before we had to board the ship, and there was one thing I really wanted to do that we’d only seen the outside of – Ernest Hemingway’s house. For me this location was a total win because it combines a few things I really love. As an English Literature major in college, the nerdy part of me loves doing things like touring authors houses and learning more about them (while I’ll admit I actually am not a fan of Hemingway’s writing, he’s still very significant in the history of literature). But the main reason to visit: the cats. 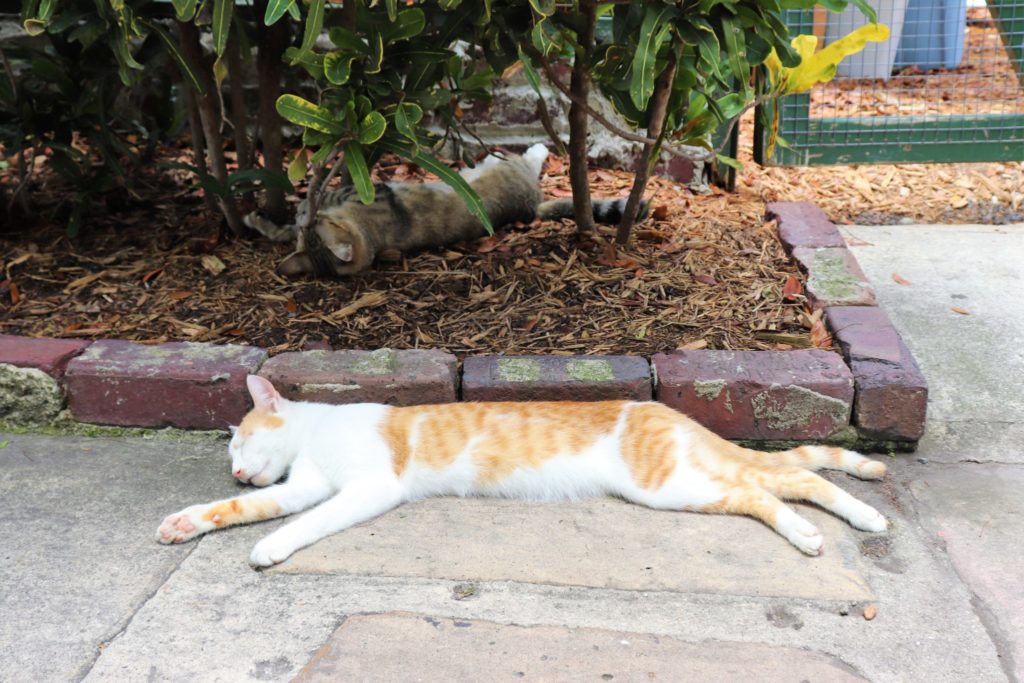 Here’s the story. At one point Ernest Hemingway was gifted a poly-dactyl cat – that means it had 6 toes instead of 5.  This cat went on to reproduce and basically the Hemingway house is now covered in cats. There are over 50 of them currently living there and they pretty much run the place. They’re used to people and very friendly, so you can pet them as long as you don’t pick them up.  The cats are what make this such a popular tourist destination on Key West. 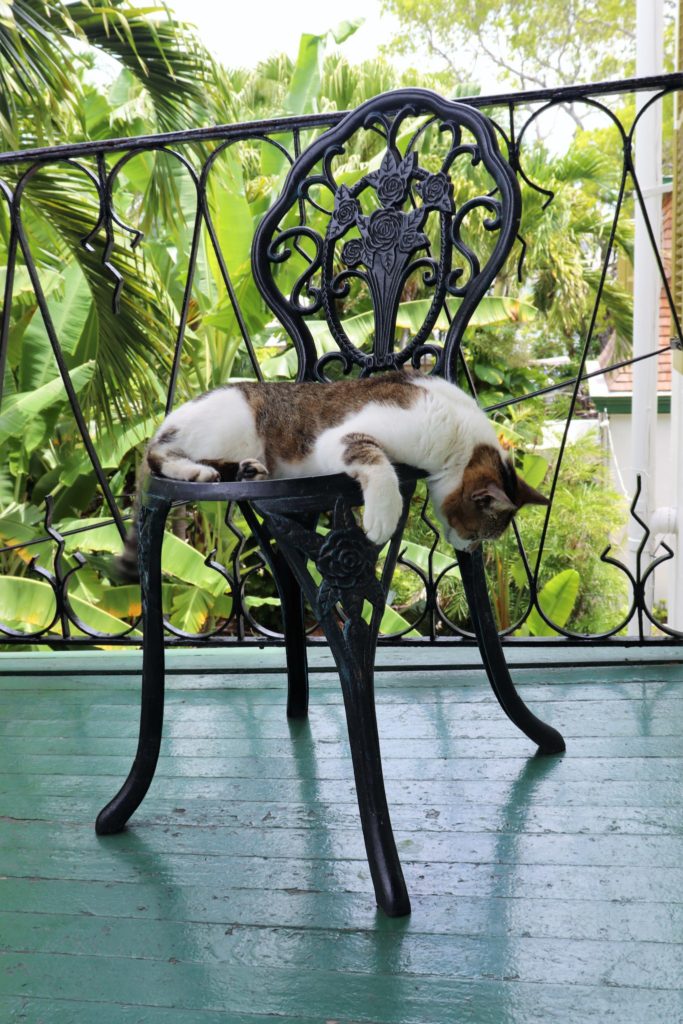 The price is $14 to get in, which is a bit steep since the house is not that big and we spent maybe an hour there. But some of the money goes to the cats, so I’m okay with that. You can do a guided tour or just walk yourself through. We were kind of tired of hearing someone talk at us from our earlier tour so we explored on our own. It was interesting and we found so many cats! It was like a game to spot the cats wherever you went. 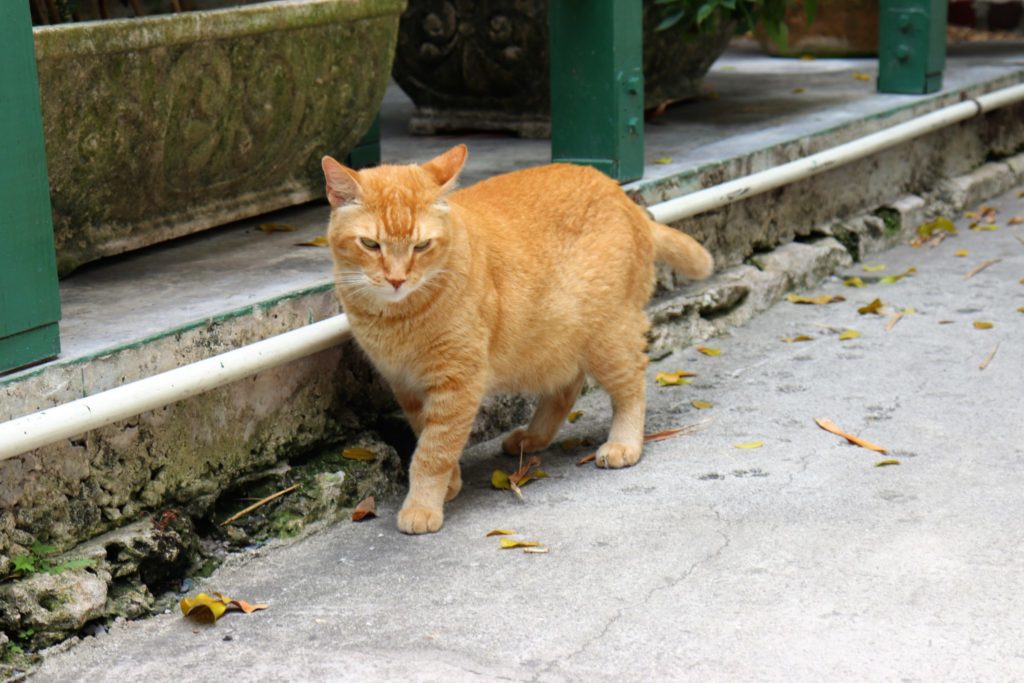 Once we were done there and visited enough cats we were pretty hungry, so we hunted around for a place to eat lunch that wasn’t too crowded.  We came across a place called Bagatelle that had a table. Not surprisingly they specialized in seafood (many places in Key West do). I enjoyed a Key West ale and the lobster mac and cheese (so good!). Jason had the lobster grilled cheese which was also excellent. 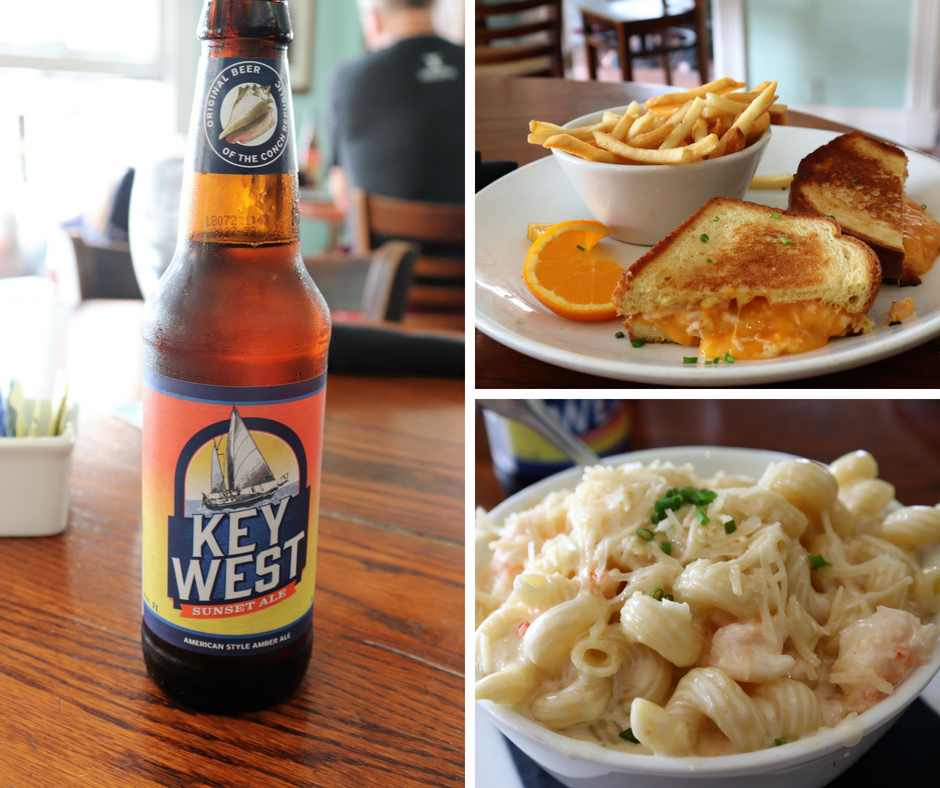 Once lunch was done we headed back to the ship, where I took a nap.  We got up in time to check out the pub favorites sing-along at the Snuggly Duckling. For Tangled night they rethemed the sports bar as the Snuggly Duckling and it was really well done! A piano player did a bunch of popular songs and encouraged the audience to sing along. I enjoyed it.  The show for that night was the Tangled musical, which was good. It was basically just a stage version of the movie with all of the same songs and everything. I really like Tangled so it was fun.

Our dinner that night was at Rapunzel’s Royal Table, so very appropriate for all of the Tangled stuff going on! The restaurant is really pretty and well done, with lanterns hanging everywhere. This was probably my favorite overall meal of the cruise (not counting Palo) and the best entree I had – the Tangled pasta, which came in a pesto sauce with scallops. Everything I like! My dessert was excellent too. The Frying Pan Sweet Bread was basically a fancy donut with ice cream and it was decadent and delicious. 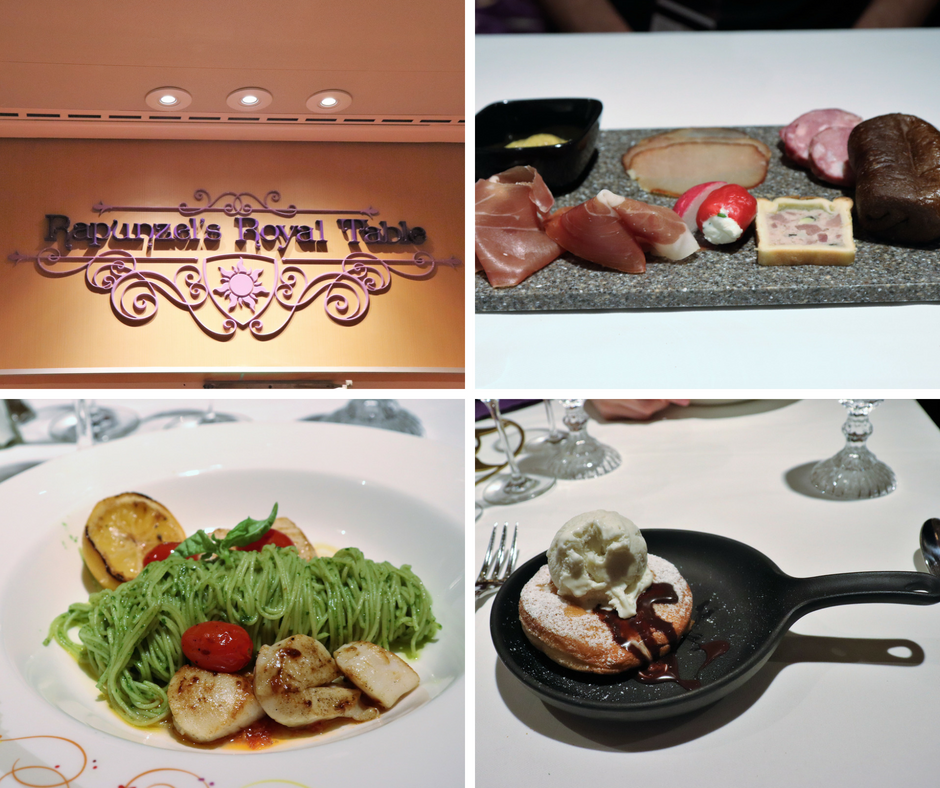 I was glad that we were done with dinner in time to check out one of the other events they had going on that night – the Snuggly Duckling takeover! Thugs took over the bar and did a little show that was hilarious and probably about as inappropriate as you’ll get on Disney (which is to say, not very – but still a little bit!). We laughed a lot at this and I wish it was longer than half an hour. 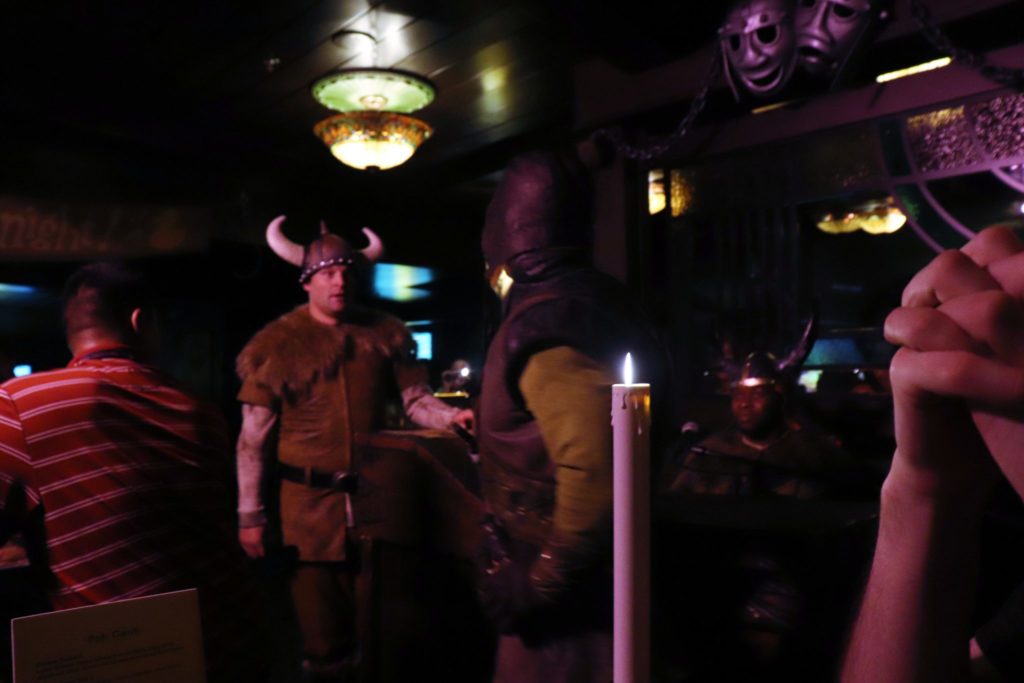 Once that was over we still had one more event for the night – a whiskey tasting we had signed up for!  It was at 10:30 and I think Jason was so ready for bed (he’d also had a little too much of the other drinks earlier!) so I told him I’d go alone if he wanted, but he sucked it up and joined me. He’s the one that’s really into whiskey – I don’t know much about it but thought it would be a good opportunity to learn. I was the only woman there doing the tasting (a few other women were there to just sit with their significant others but didn’t participate). It was enjoyable and I liked the opportunity to learn a bit more about something I didn’t know too much about! Whiskey isn’t my favorite drink but I think I’m developing more of an appreciation for it now. 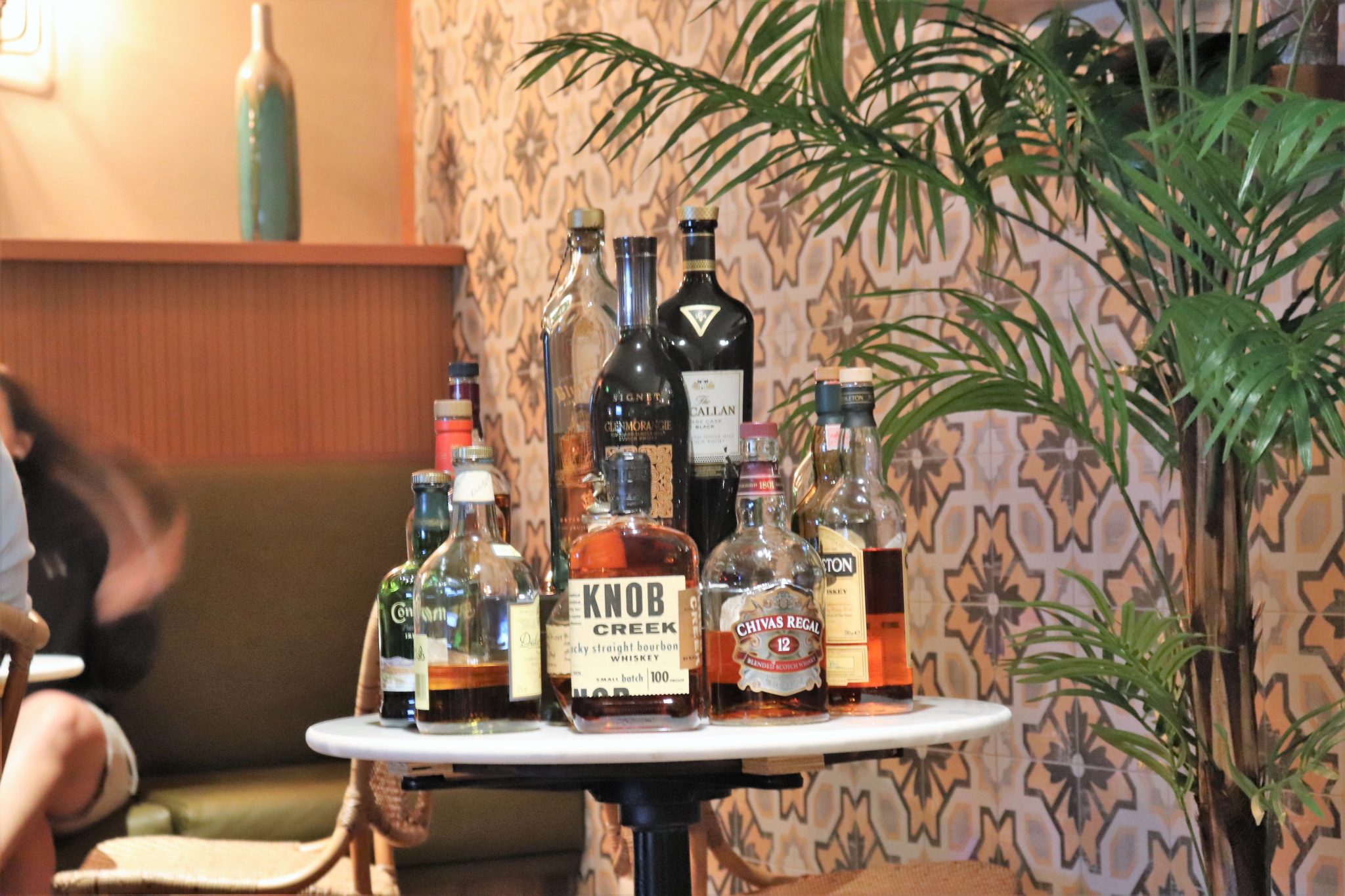 It had been a long day so it was definitely time for bed after this! We had a relaxing day planned for the following day – and it would be Jason’s birthday as well!

What would you want to do with a day in Key West?