You are here: Home / At Home / Princess and the Frog birthday party 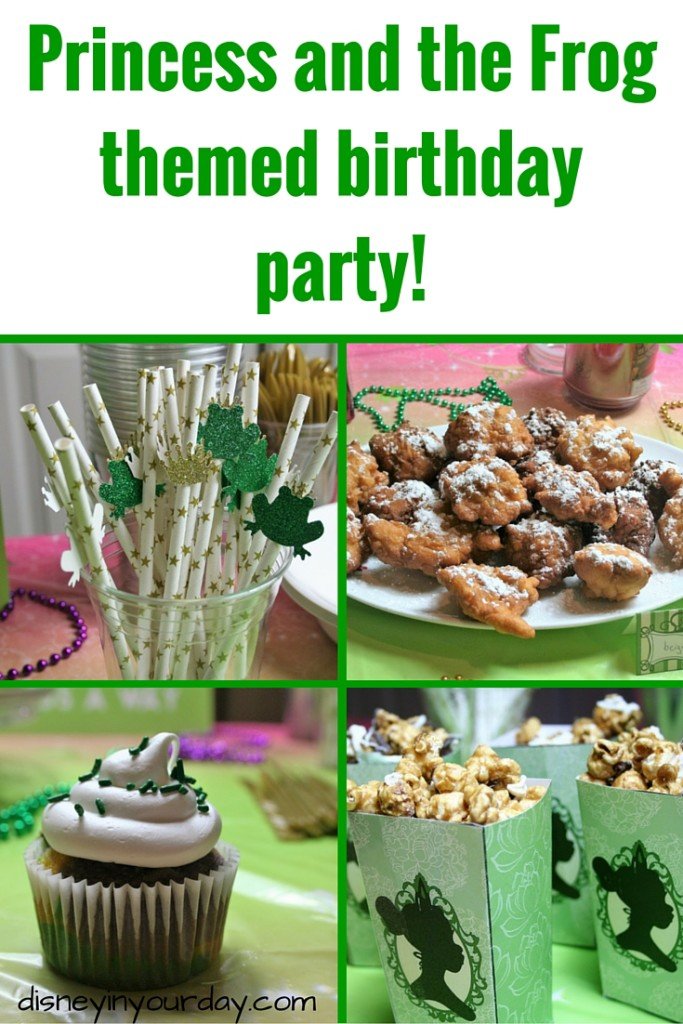 On April 12th I turned 28 years old.  And like any normal 28 year old, I obviously decided to have a Princess and the Frog themed party for my birthday.  And I have to say, we had about 15 or so friends over and they all seemed to really enjoy it!  A couple hadn’t seen the movie (we watched it), but some not only knew it but were able to sing along with all the songs too!  I’m such a dork I throw myself a Disney themed party every year (I’ve now done Beauty and the Beast, Frozen, and Wreck-It Ralph), but this one may have been my favorite.  Here are some of the things we did to make it special! 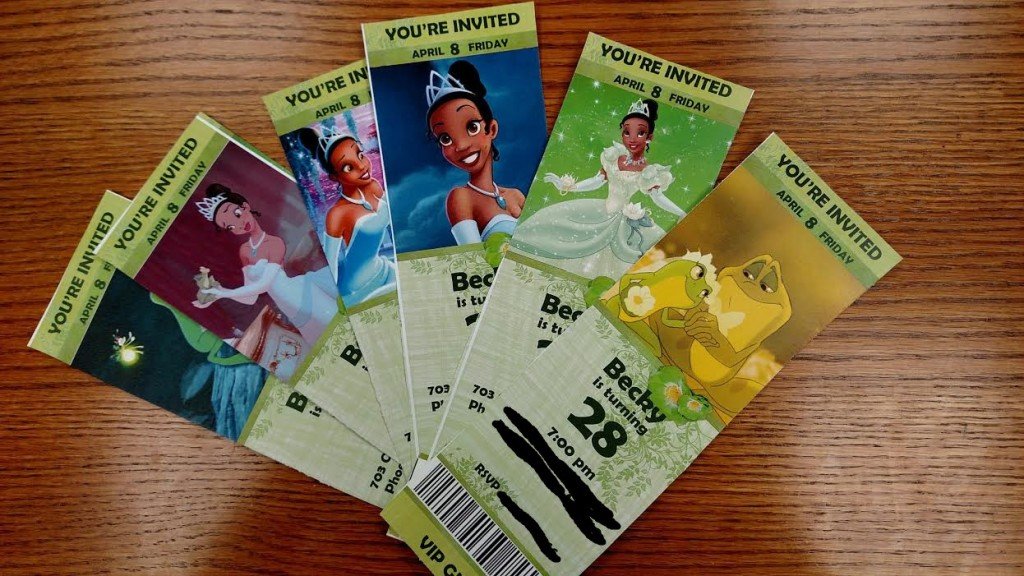 For the invites, I fell in love with these Princess and the Frog movie ticket invitations from ED Party on Etsy!  There are a number of different styles and she customizes them with your information, then you print them yourself.  I loved it because I could print hard copies, but I also had digital files so I could post them right on my facebook event too.  Plus they are super cute! 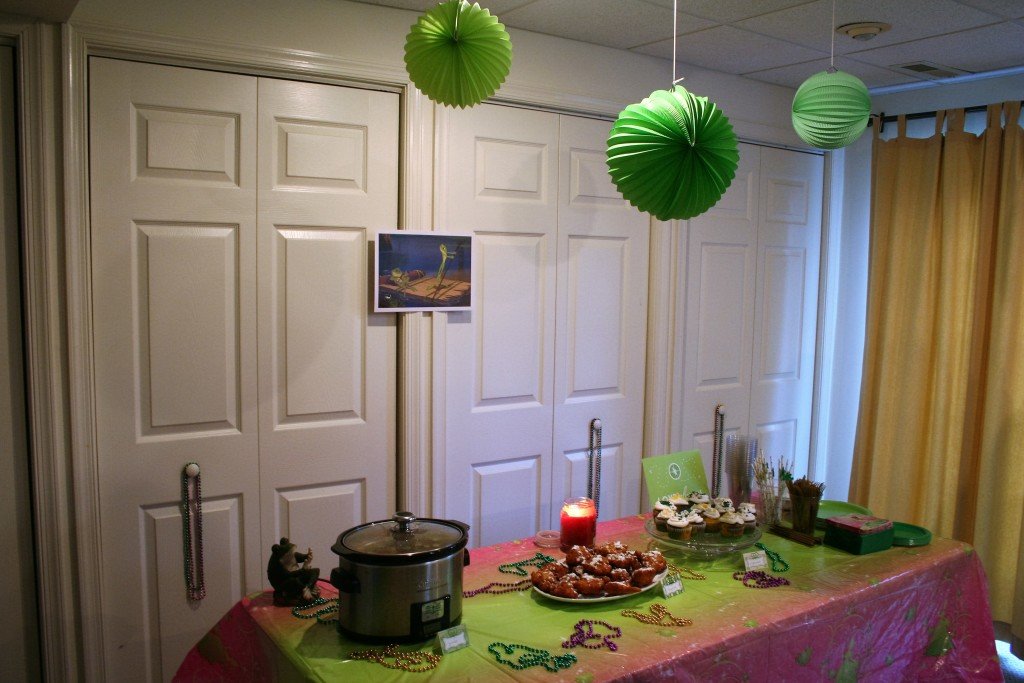 Princess and the Frog is the perfect movie to come up with food items for, because opening a restaurant is Tiana’s passion!  Plus it takes place in New Orleans, home to some great food items.  I did a couple of things for this party.

Slow cooker chicken gumbo – I found this slow cooker gumbo recipe from SparkPeople.  I chose this one because it looked the simplest.  It actually turned out to be a big hit – I never got to taste it but a number of people told me how much they enjoyed it! 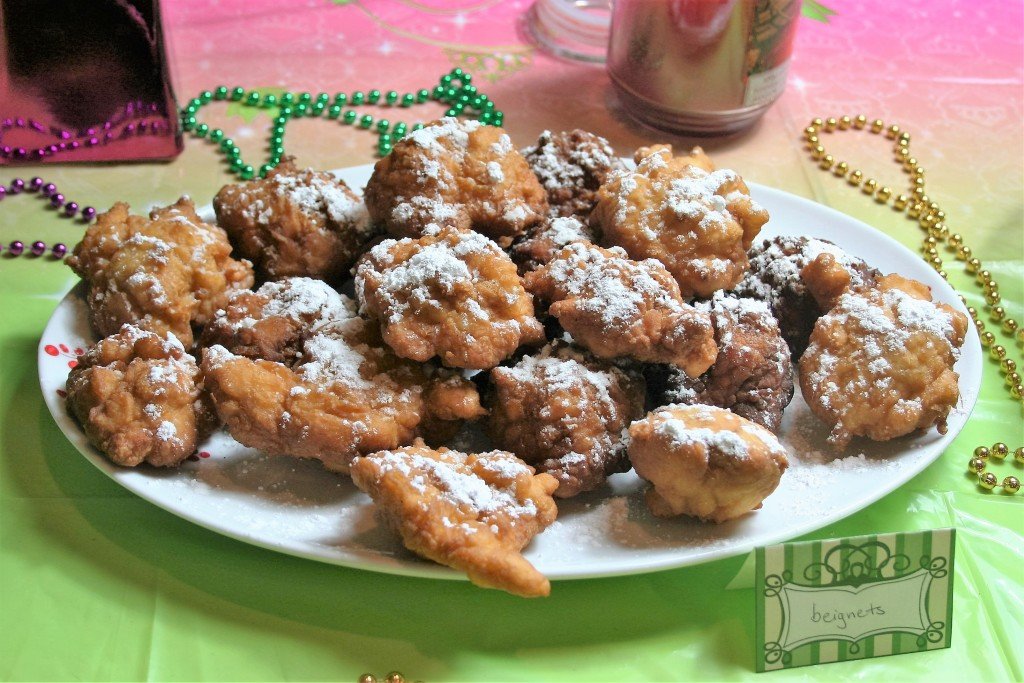 Beignets – another highlight of the movie, I had to attempt to make beignets.  I used the recipe from the Princess Tiana cookbook I have.  My husband helped me and I think we cooked a couple of them for too long, but they were still pretty tasty! 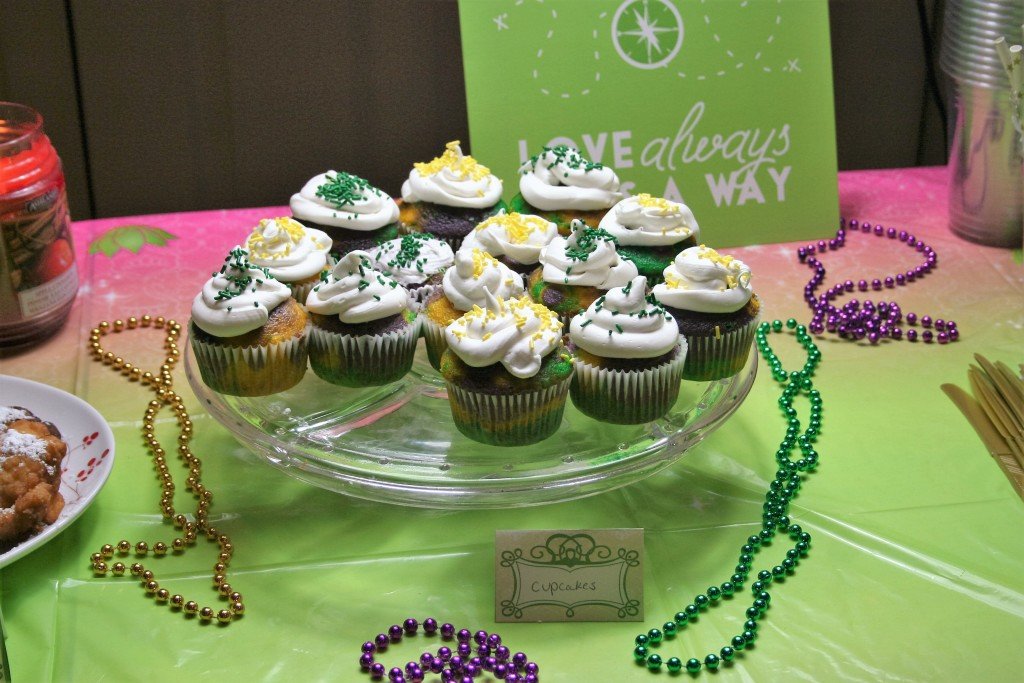 Mardi Gras cupcakes – it’s a birthday party so you have to have cupcakes!  To go with the theme I made “Mardi gras” cupcakes.  I just bought boxed cake mix and then used food dye to create purple, green, and yellow batter, and swirled it all together.  They actually came out looking pretty cool!

A friend of mine at the party also brought along muffuletta dip and bread that was absolutely delicious.

A few months ago I hosted my Disney Cocktail Party and featured the Fairy Tale Cocktail book from Cocktails by Cody!  He had two Princess and the Frog themed cocktails in the book so of course this was the perfect opportunity to try them. 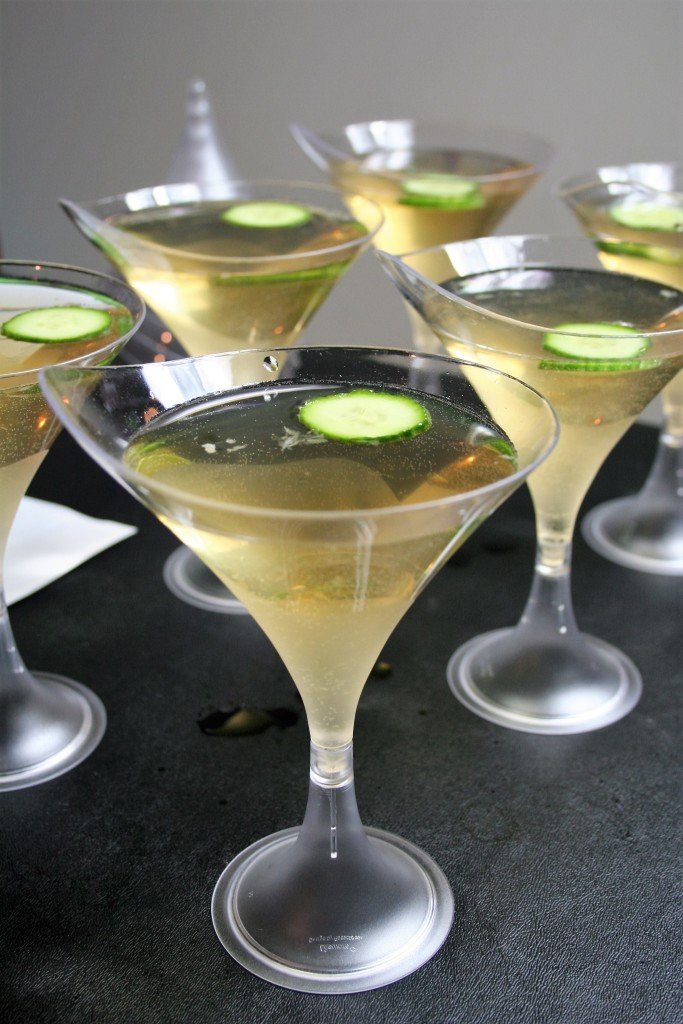 The first was the Bayou Beauty.  This one included white rum, ginger liqueur, and cucumber.  This was my personal favorite of the two – I found it to be tasty and refreshing. 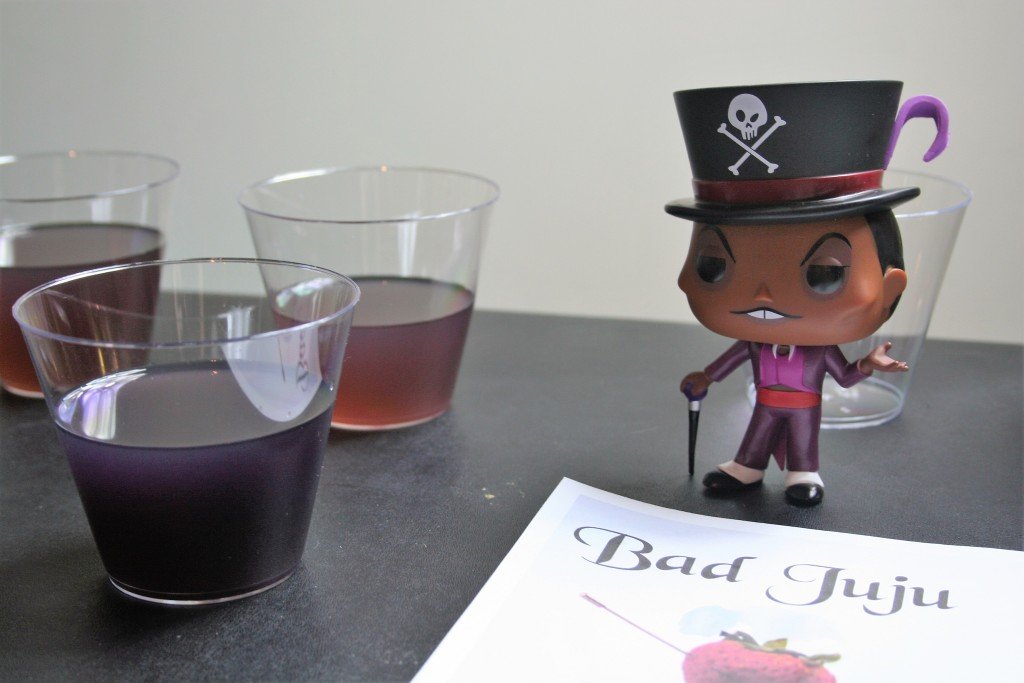 The other one was Bad Juju.  I will admit that I could not at all get it to look like Cody’s!  The layering was not working for me and I didn’t have time to make the colored ice cubes, so it turned out to just be a dark purple color.  But still very yummy! 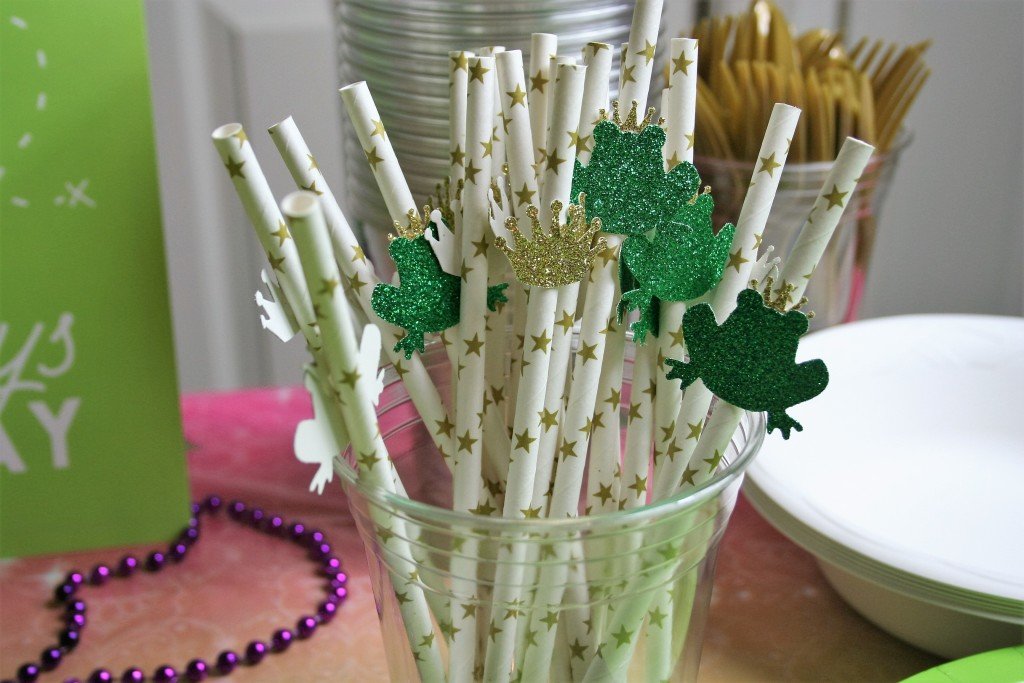 In addition to alcoholic beverages we had other options like soda, etc. available.  But the real highlight was the adorable straws from Etsy shop Sweet Honey Bee!  They were not only popular for the drinks, people loved them so much they wanted to take them home as souvenirs, or were wearing them tucked behind their ears 🙂 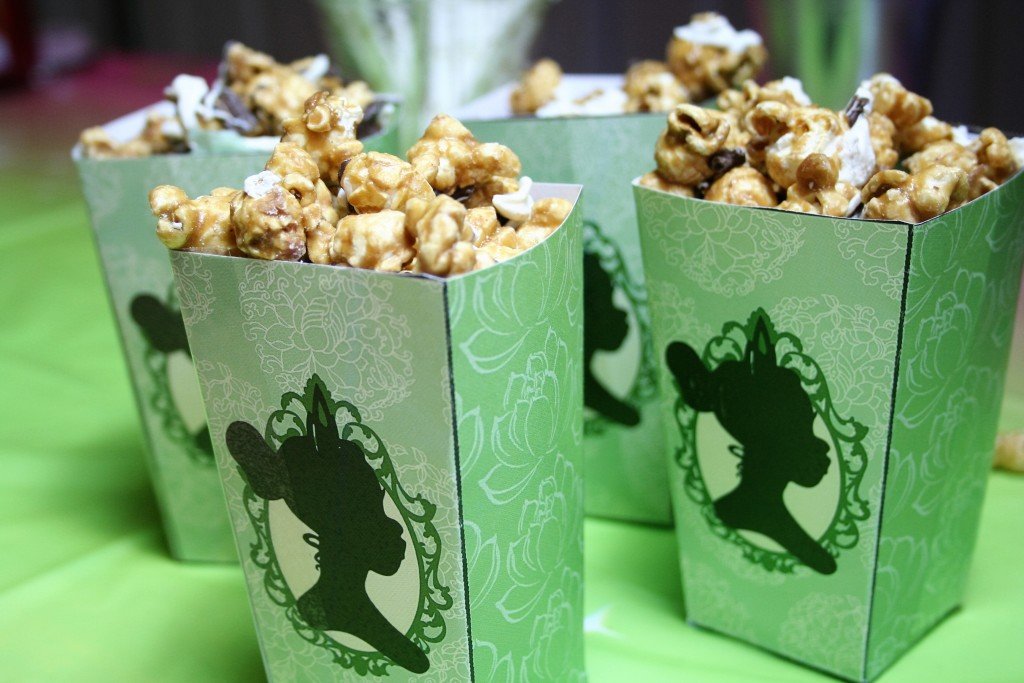 Some of the cutest decor items from this party came from an Etsy shop, Miss Frights Delights!  She has lots of adorable printables for Princess and the Frog, as well as many other Disney movies.  Very affordable so make sure you check out her shop!  The first item of hers that I used was these adorable popcorn holders.  Since we watched the movie during the party popcorn is the perfect treat to have on hand! 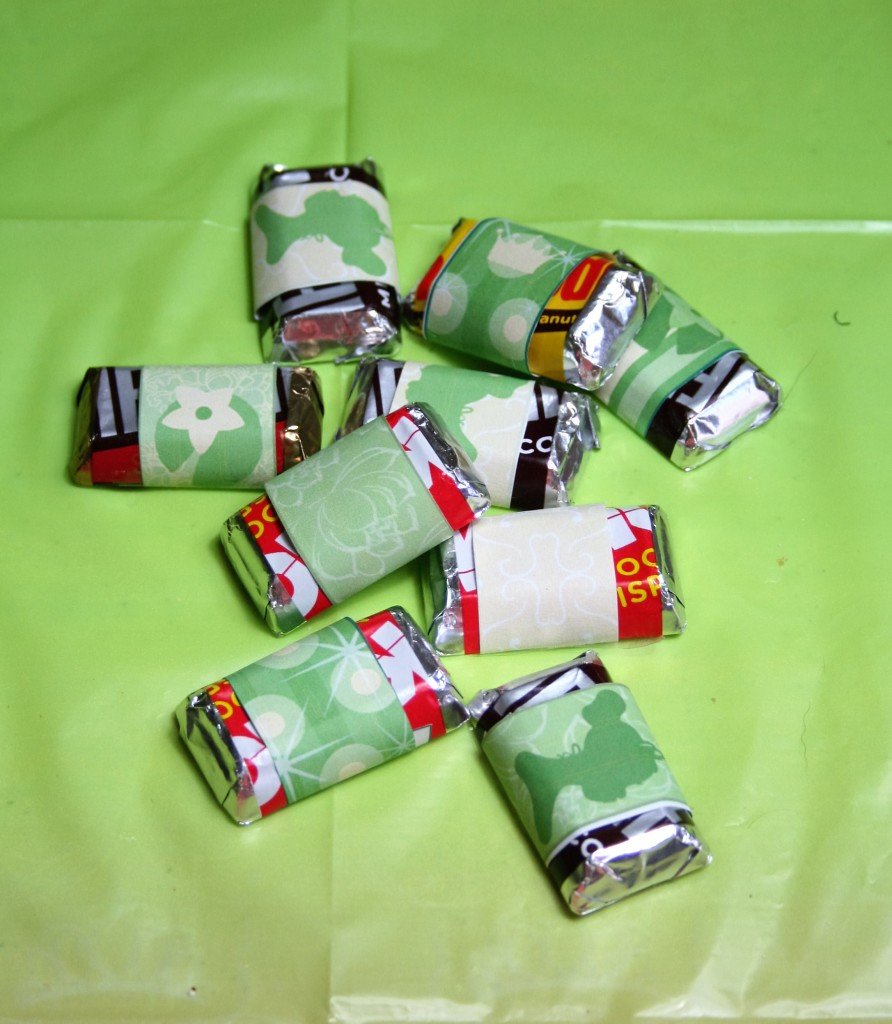 If you look in the food pictures above, you can also see the table signs from her collection that I used to label all the food.  As favors she also had chocolate bar wraps with a Princess and the Frog theme to go over mini-chocolates. 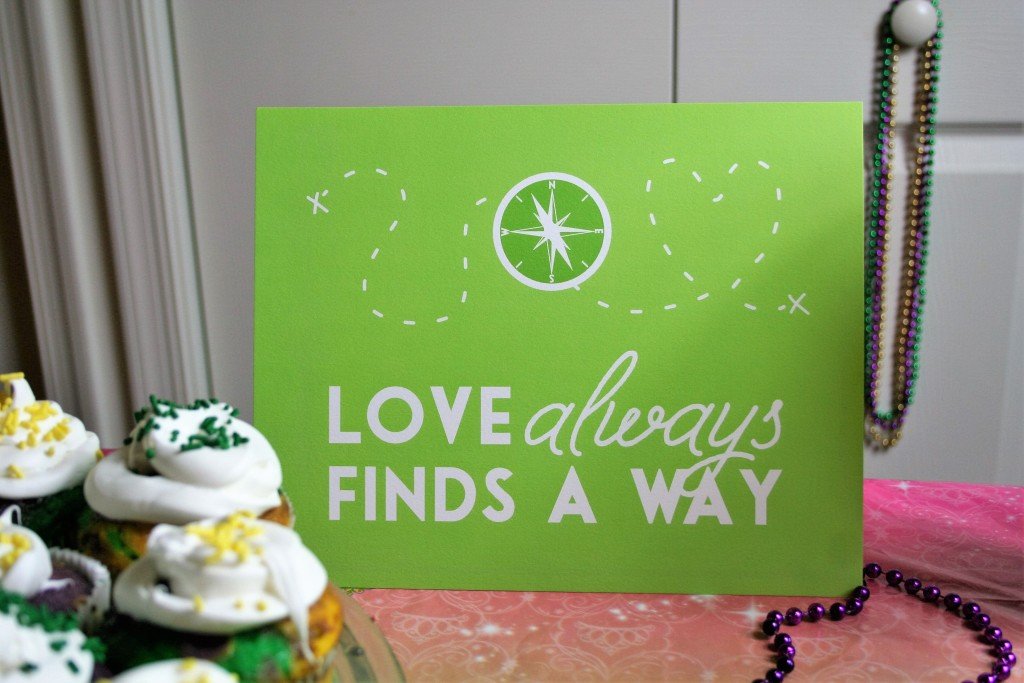 For other decor items I used mostly shades of green with some pink and gold thrown in.  I also hung up the Princess and the Frog lithographs I had from when I bought the DVD, and any other little Princess and the Frog items I had in my house (like my Dr. Facilier pop vinyl and my Prince Naveen stuffed animal!).  Another printable I put up that I really loved was this sign that I won from Enchanted Type.  It’s a quote from the movie – Love Always Finds a Way – and I think it’s gorgeous!  I love her shop.

What do you think of my Princess and the Frog birthday party?  What’s your favorite part?