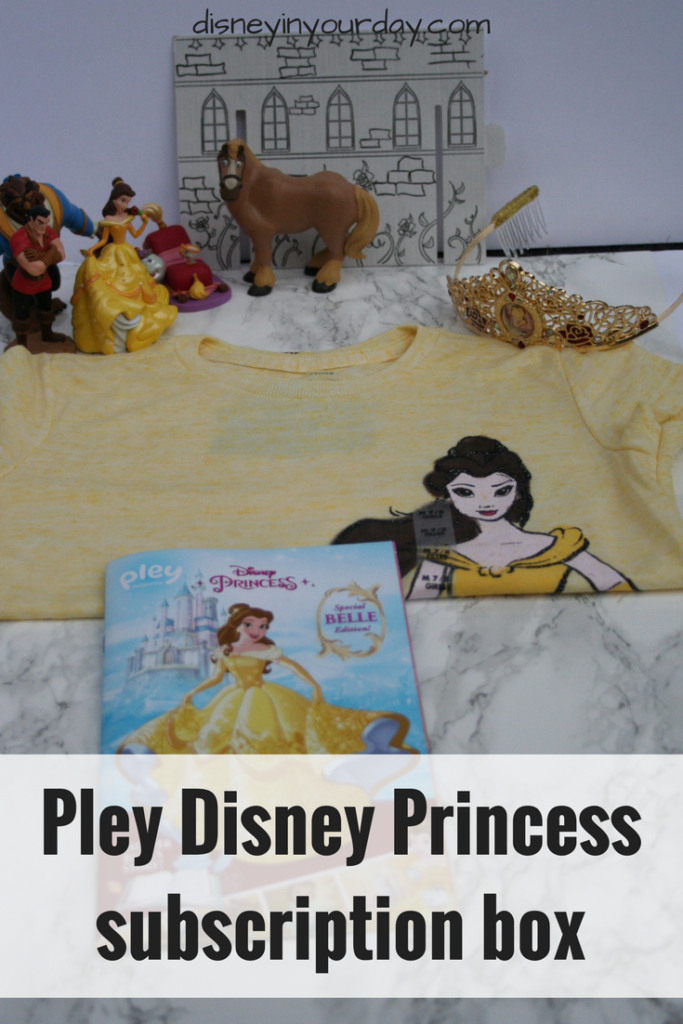 There are lots of Disney subscription boxes out there, but one of the most coveted themes I’ve seen requested (and I get contacted by a lot of people looking for a Disney subscription box!) is a Princess themed box.  Well, it seems that Pley has answered the call for that in an official capacity with Disney.

Their Princess box is geared toward children and advertises 4-8 official Princess toys, accessories, and activities.  It is delivered every other month and at this point each box seems like it will be themed after a different Princess.  The first box, not surprisingly, was all about Beauty and the Beast and Princess Belle.  Though it’s clearly aimed at younger kids, I decided to order myself a box.  One, because I figured a review on this blog would be helpful, and Two, because I’m really just a big kid at heart – and let’s be honest, I enjoy Princess toys, accessories, and activities! 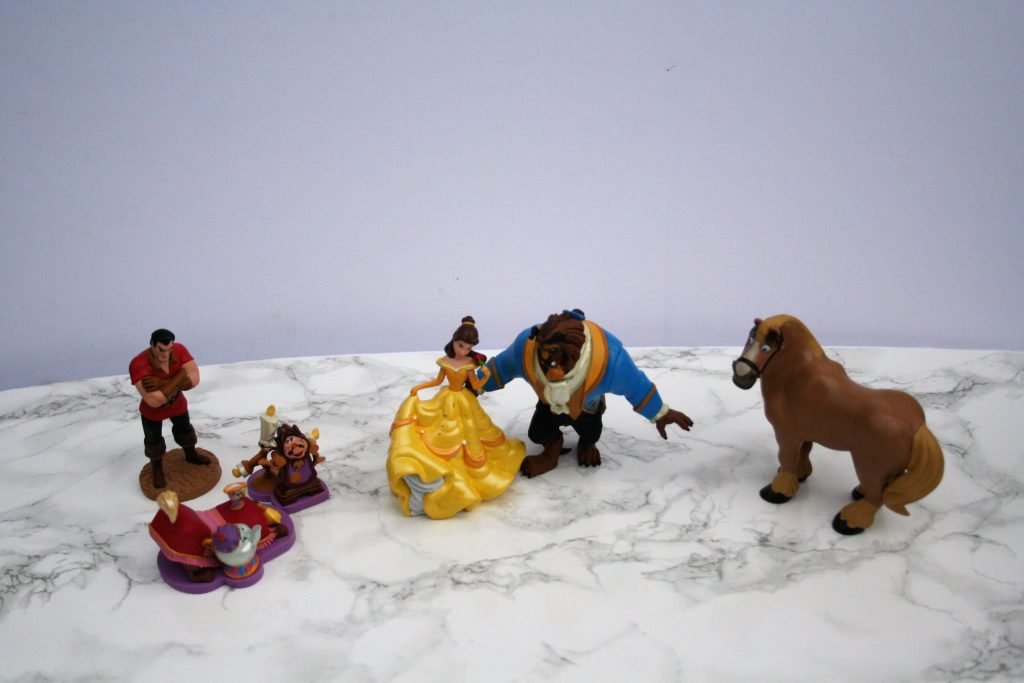 There were 4 main items/components in this box, plus a booklet.  The first was a toy figurine set.  I had an idea of what might be coming thanks to photos and advertising, and I figured this could be really cute.  I love Beauty and the Beast and all the characters.  I collect lots of Beauty and the Beast stuff and put it out on display so this might be something else I could add to the collection.  And it came with a number of cute looking figures – Belle, the Beast, Phillipe, Cogworth, Lumiere, Mrs. Potts, and Chip. 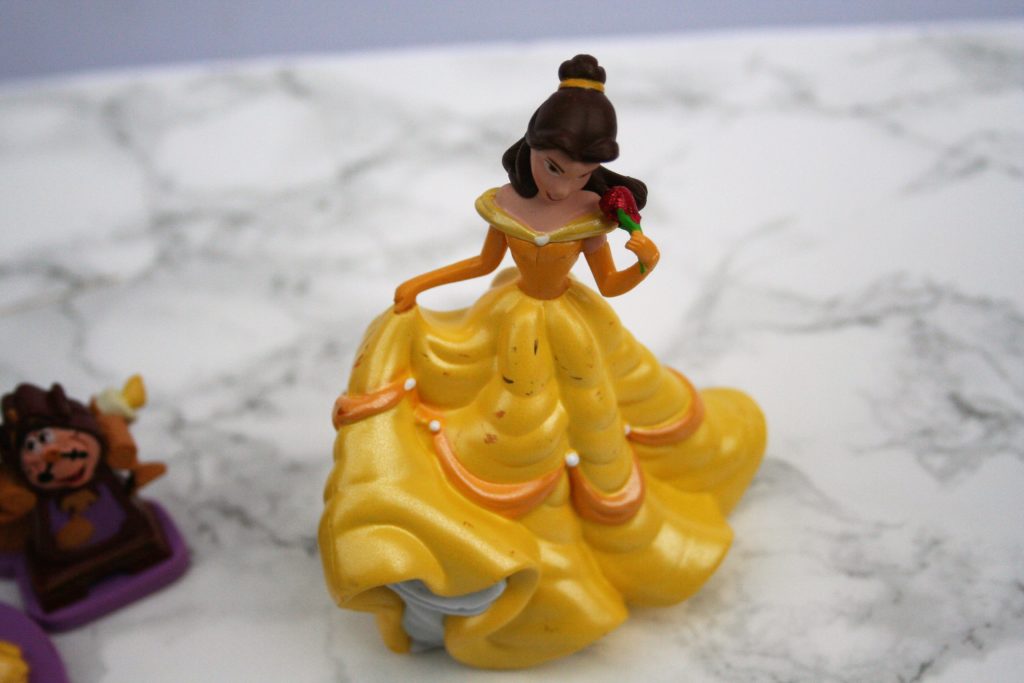 They’re basic, plastic figurines but cute at first glance.  However, the thing that got me was the fact that some of the pieces were pretty scuffed up.  Belle in particular was really sad looking.  Even if it was just for a kid who was going to play with it, I don’t know how I’d feel about receiving figurines already in this condition.  And definitely not something I would add to my collection unless I can find a way to really clean her up somehow (which I shouldn’t have to do). 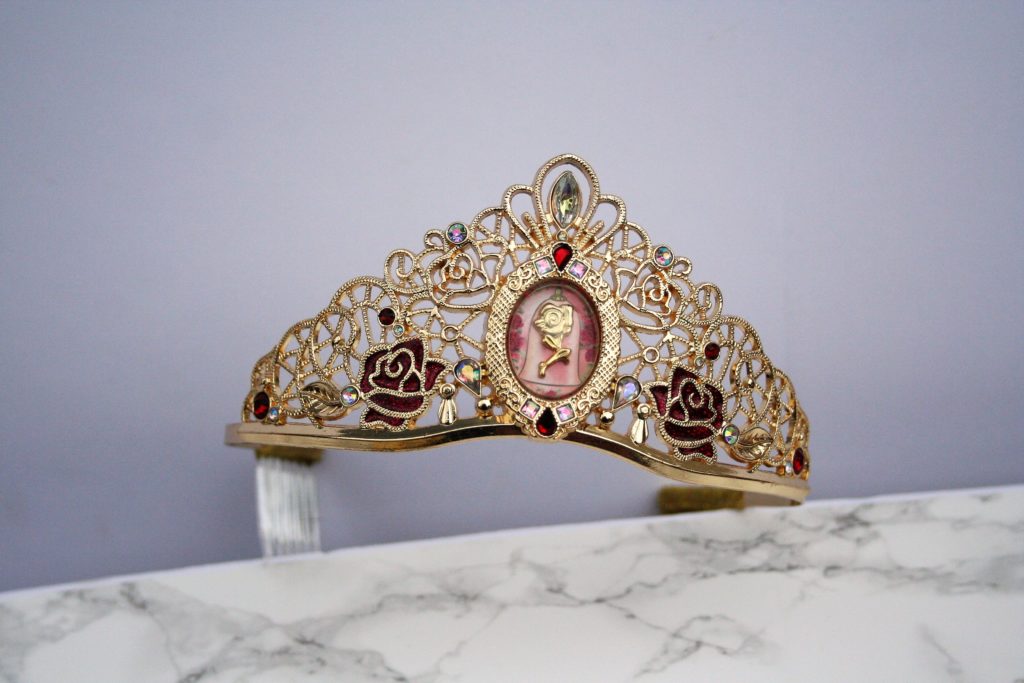 My favorite thing in the box was the tiara.  Despite being a plastic child’s tiara, it’s really pretty and looks sturdy.  it has the enchanted rose in the middle so it’s Belle themed without being over the top about it (like the ones they sell with her face right in the middle).  Plus despite being for kids, it also fits me.  This is totally something I’d rock at the theme parks.  Or, you know, just around the house when I feel like it. 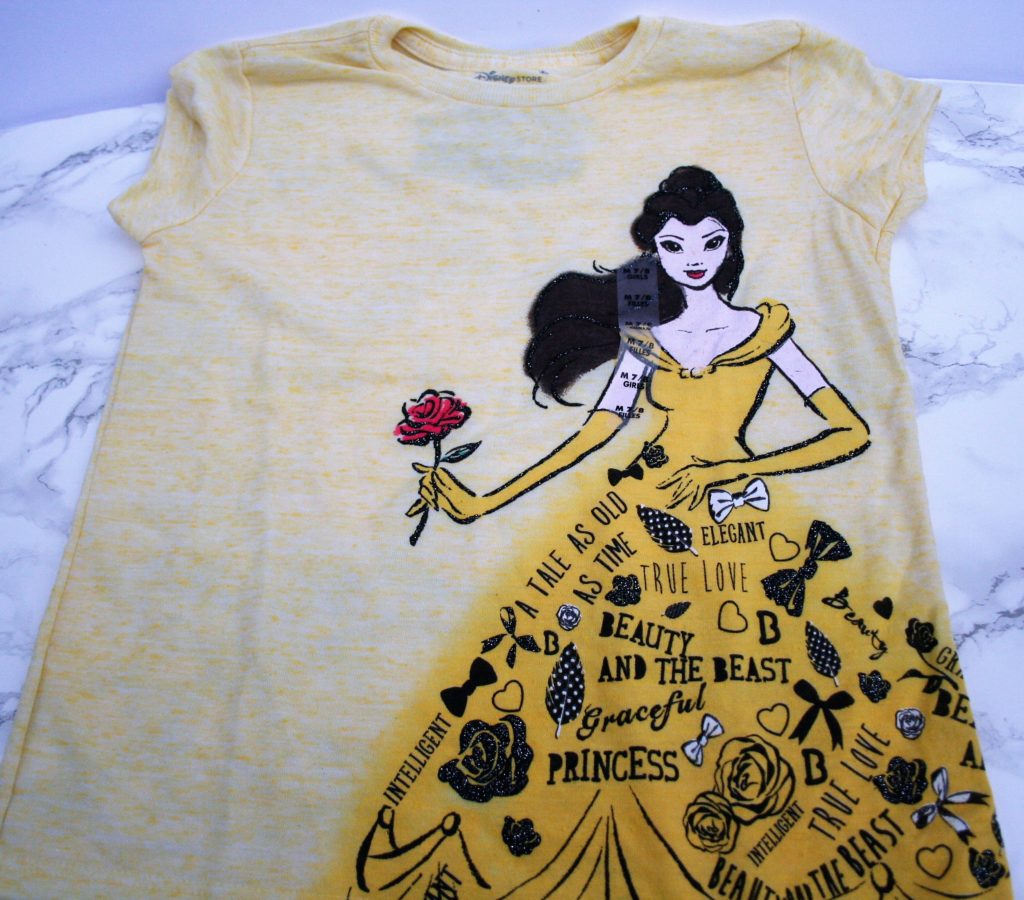 I don’t know if a t-shirt will be included in every box, but I had a feeling there would be one since it asked for t-shirt size.  The only options are child XS, S, or M.  I picked M which is a size girls 7-8.  Obviously much too small for me, haha!  I’m surprised they don’t go any bigger.  I feel like this box could be something older or bigger kids would want too, but the way it is now it’s rather limiting.  The t-shirt was super pretty though.  I was bummed they didn’t make it an adult size because I would totally wear it!  I’ll just need to find a young girl to gift it to. 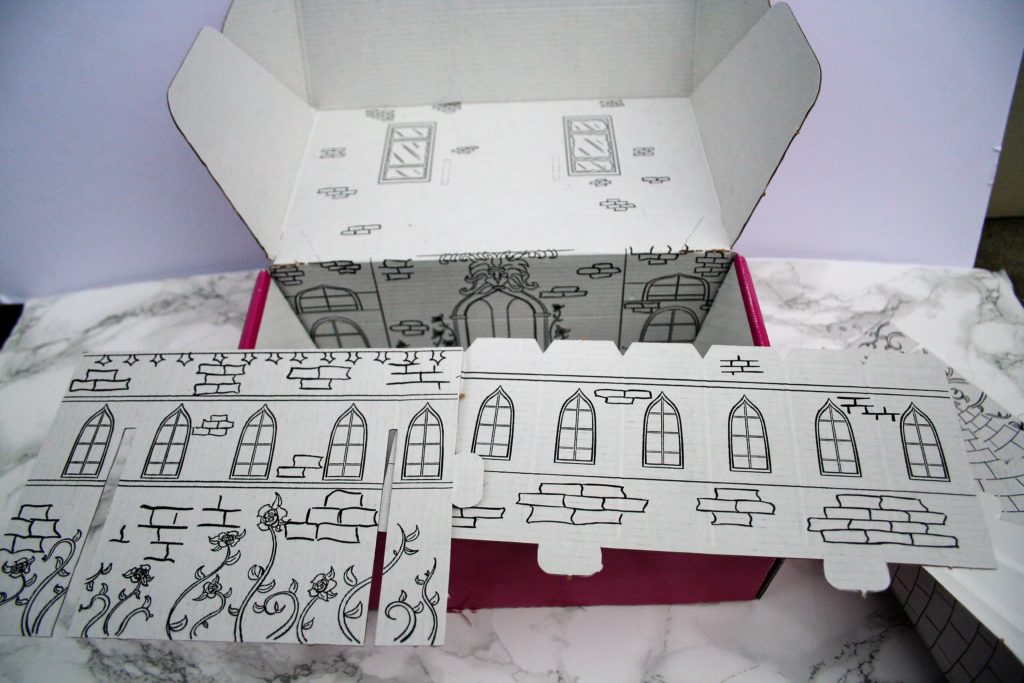 One of the more creative things with this subscription box is that the box itself is actually something you can use and play with.  It comes with some extra cardboard pieces and you can color everything in.  It comes with instructions for assembling it into a castle.  This is something I would have absolutely LOVED as a kid and I think it’s an easy and great idea. 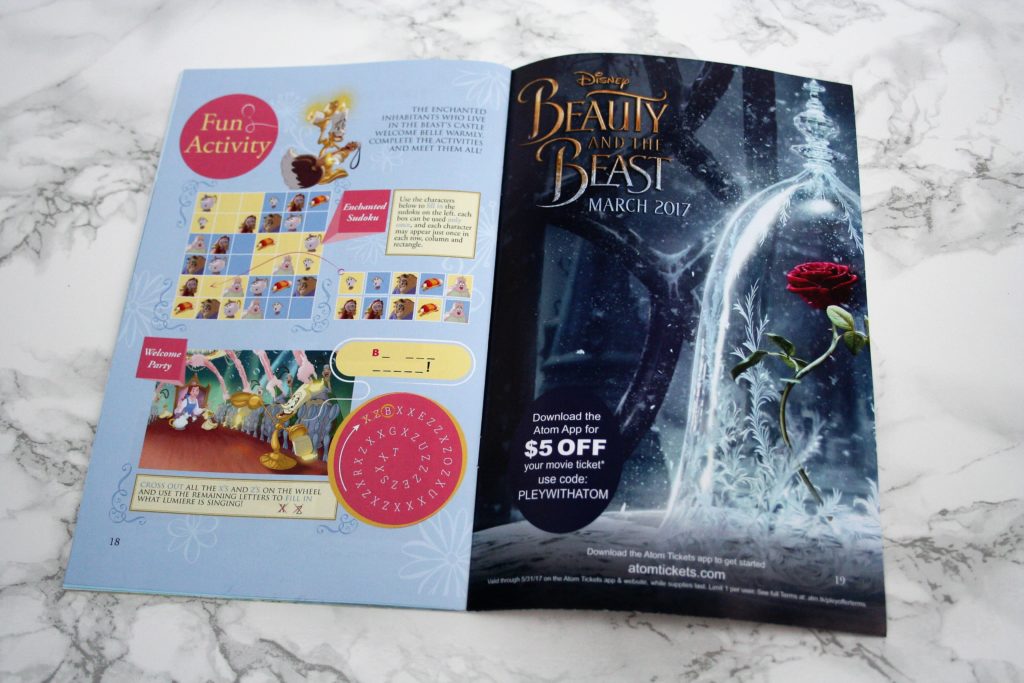 Finally, this box came with a booklet.  It lists the things in the box as well as other related items from the Disney Store.  But it also had a number of fun activities related to Beauty and the Beast – a maze, matching game, etc.  Another fun little item.

Even though it’s aimed at kids, I had thought if the box was decent I might hold on to the subscription (depending on the future themes).  However, after receiving this first box I decided to cancel because it just didn’t seem worth the $25+ to me for these main reasons: 1., the quality of the figurines I received, and 2., the t-shirt that I can’t do anything with.  Obviously the latter is my own issue and just something that comes along with buying a children’s box, but the first one is something they could fix.

I think the Pley Disney Princess box could be a really great option for kids, but I’m hoping they keep a closer eye on quality control in the future. Hopefully I just got a rare bad set and others have better luck!

Is there a child in your life that you think would enjoy the Pley Disney Princess box?  Which item in the box was your favorite?