You are here: Home / Disney Movies and TV / Pixar movie tournament – the results!

Out of all the Pixar movies which have been released, which one is the most popular?  I created a tournament to see what my readers would have to say about that.  And after some pretty tough battles and a couple of surprises (like Wall-e losing out early on and Monsters Inc. and Up not making it further), it all came down to two solid films: Toy Story and Finding Nemo.

So the winner of the Pixar movie tournament is… 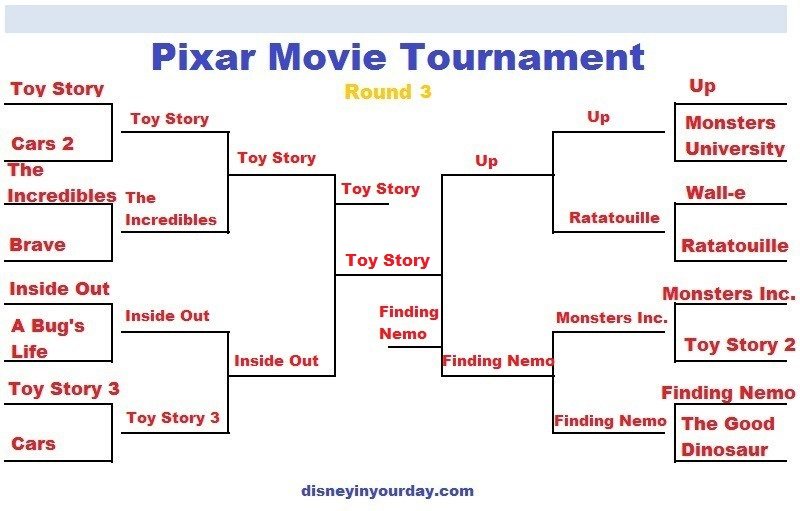 Even over 10 years after it’s release, Toy Story has continued to be a well loved favorite.  I find it interesting that the very first Pixar film is the one that is the most popular.  You would think that improvements through the year would have made even stronger, more popular films – but something about Toy Story just resonates with people.  And it also goes to show just how much Pixar has had to live up to – they set some pretty high standards with their first feature length film!  But I think they continue to deliver with the great movies they put out.

I hope you all had fun participating in this Pixar movie tournament with me!  I’d love to do another tournament at some point, and I’ve also gotten a few suggestions – including princesses and Pixar shorts!  Any other suggestions for what Disney things you’d like to see pitted against each other? (In the past we’ve also done animated movies and Disney restaurants).