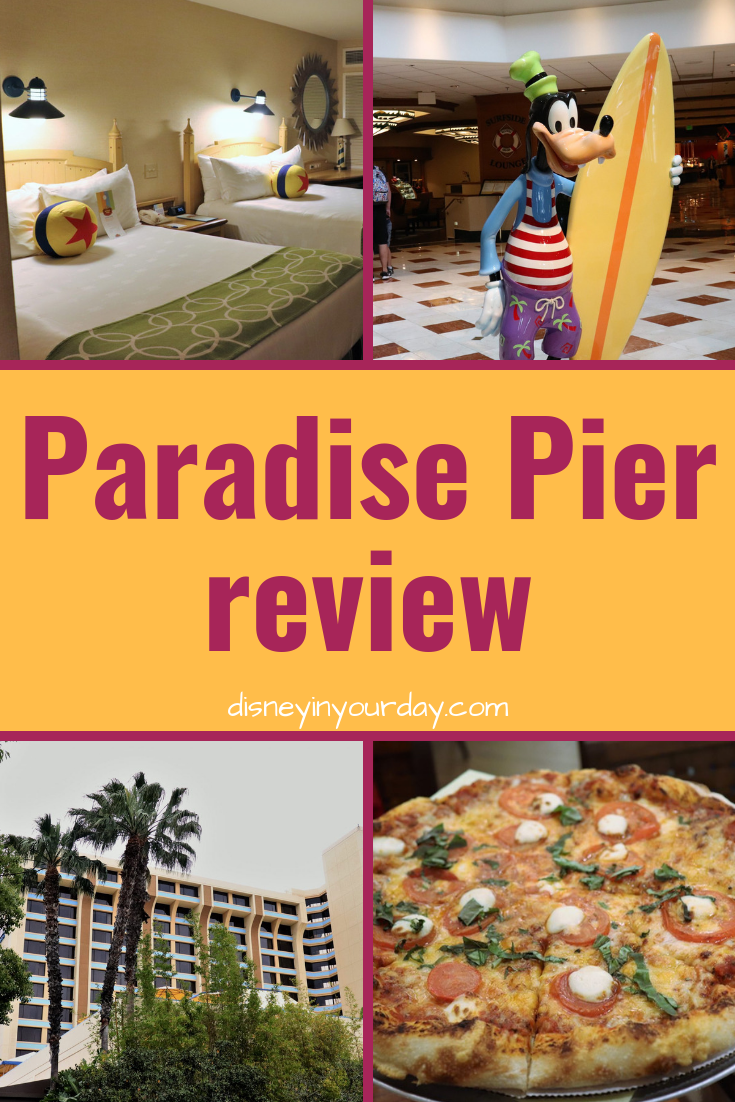 Disneyland has three official hotels: Paradise Pier, the Disneyland hotel, and the Grand Californian. The thing that makes Disneyland a little different from Disney World is how close everything is – you can walk from all three of those hotels to the parks, but there are also “Good Neighbor” hotels which are walking distance as well.

We’d always stayed in a Good Neighbor hotel before, but this time we splurged for one of the Disney hotels and went with Paradise Pier. I think it was well worth the money!

Our main reason for staying there was because Star Wars: Galaxy’s Edge was opening during our trip, and people at Disney resorts were guaranteed a reservation. I am glad we did it though because there were a lot of things we loved about Paradise Pier! 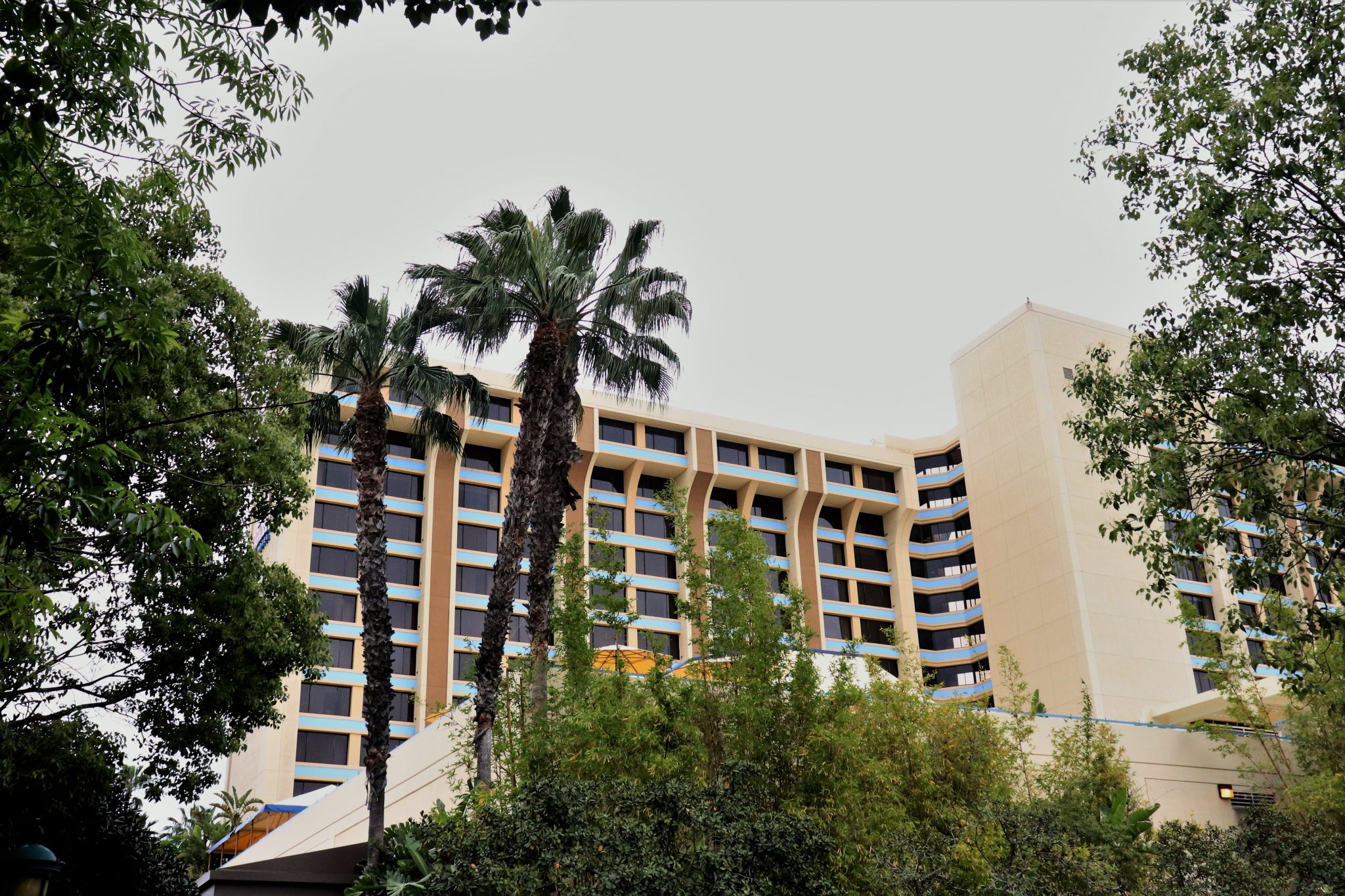 This is hands down our favorite thing about Paradise Pier – the location is amazing. You can walk right from the hotel to Disneyland. We were in Downtown Disney in less than 5 minutes and at the gates to the parks in less than 10. The Good Neighbor hotels are walkable, but the ones we’ve stayed at are usually around a 20 minute walk. 20 minutes isn’t bad, but it does feel like a big difference at times. For instance, we could go back to the hotel to drop off from purchases and not feel like it was super inconvenient.

Paradise Pier is the most affordable of the hotels so it is the furthest one out from all the Disney hotels (you’ll pass Disneyland hotel and Grand Californian on your way).  But everything is so close together it didn’t make a huge difference. Plus with the Disneyland hotel so close we could easily make a pit stop at Trader Sam’s! 😉 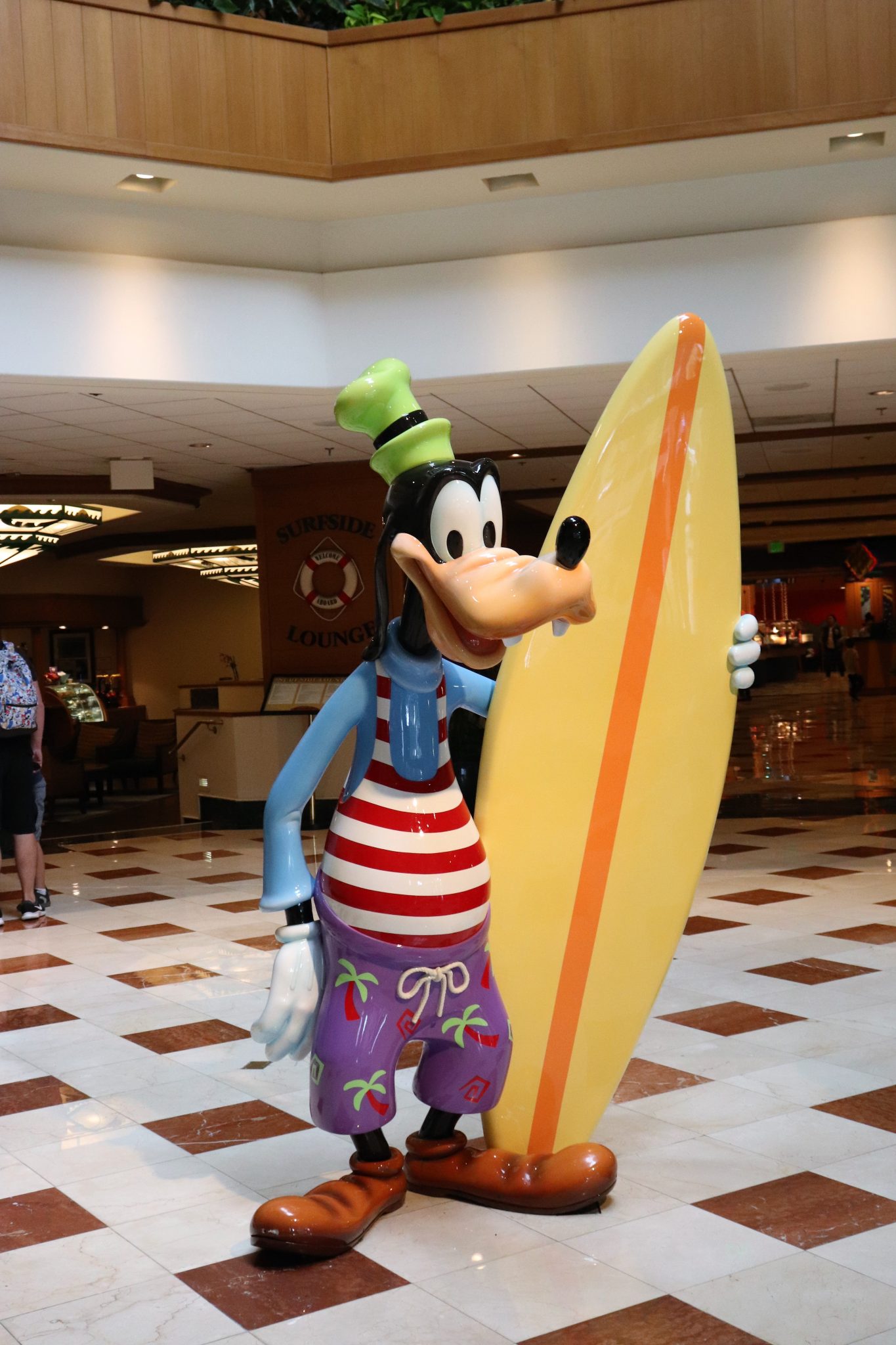 Paradise Pier has a fun “California beach” theme to it. The rooms are very beachy and you see Goofy with a surfboard when you enter the lobby. The colors include lots of yellows with some blue and reds. The artwork in the rooms incorporates Disney characters and the beach theme, and there is a cute lamp with Mickey in the room.

One interesting thing to note – Paradise Pier hotel is named after the section of the California Adventure park that used to have the same name. That area of the theme park was recently re-themed to “Pixar Pier.” There are now touches of Pixar in the hotel as well. For example, Pixar music was always playing in the lobby, and the pillows on the bed were the iconic Pixar ball (they used to be just a beach ball). It will be interesting to see if this hotel goes more in the direction of a Pixar theme! 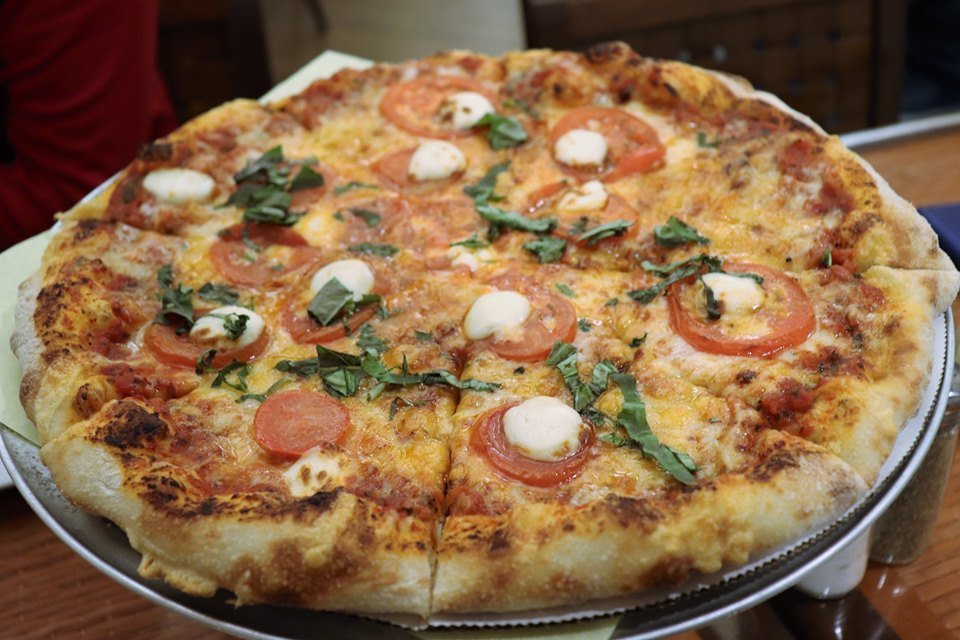 Paradise Pier has three basic options when it comes to food. Their main sit-down restaurant is the PCH Grill, which has a character buffet for breakfast and an Italian buffet for dinner. We had tried the breakfast on a previous trip and was pleasantly surprised at the quality of the food. I’ve really enjoyed all of the breakfast buffets we’ve had in Disneyland.

The interesting thing is that the hotel doesn’t really have a quick service dining location, and certainly not a food court like we’re used to at many of the hotels at Disney World (presumably because these hotels are so much smaller). So when we were at the hotel and found ourselves wanting dinner we turned to the Surfside Lounge. This space is pretty tiny. It’s a bar/lounge with some seating, though it is like a full table service restaurant with a server.  They have basic bar food here, like burgers, sandwiches, salads, and pizza.

Jason and I shared a pizza and it was pretty tasty – and not a bad deal split between the two of us. Our friend Kristin got the veggie burger, which she enjoyed. For dessert we all got alcoholic milkshakes which was fun! We enjoyed a chocolate shake with Rumchata, and chocolate shake with Kahlua, and a vanilla shake with Bailey’s.

For a final food option, there’s also the Sand Bar up by the pool. They’ve recently introduced a new food menu that looks pretty tasty. 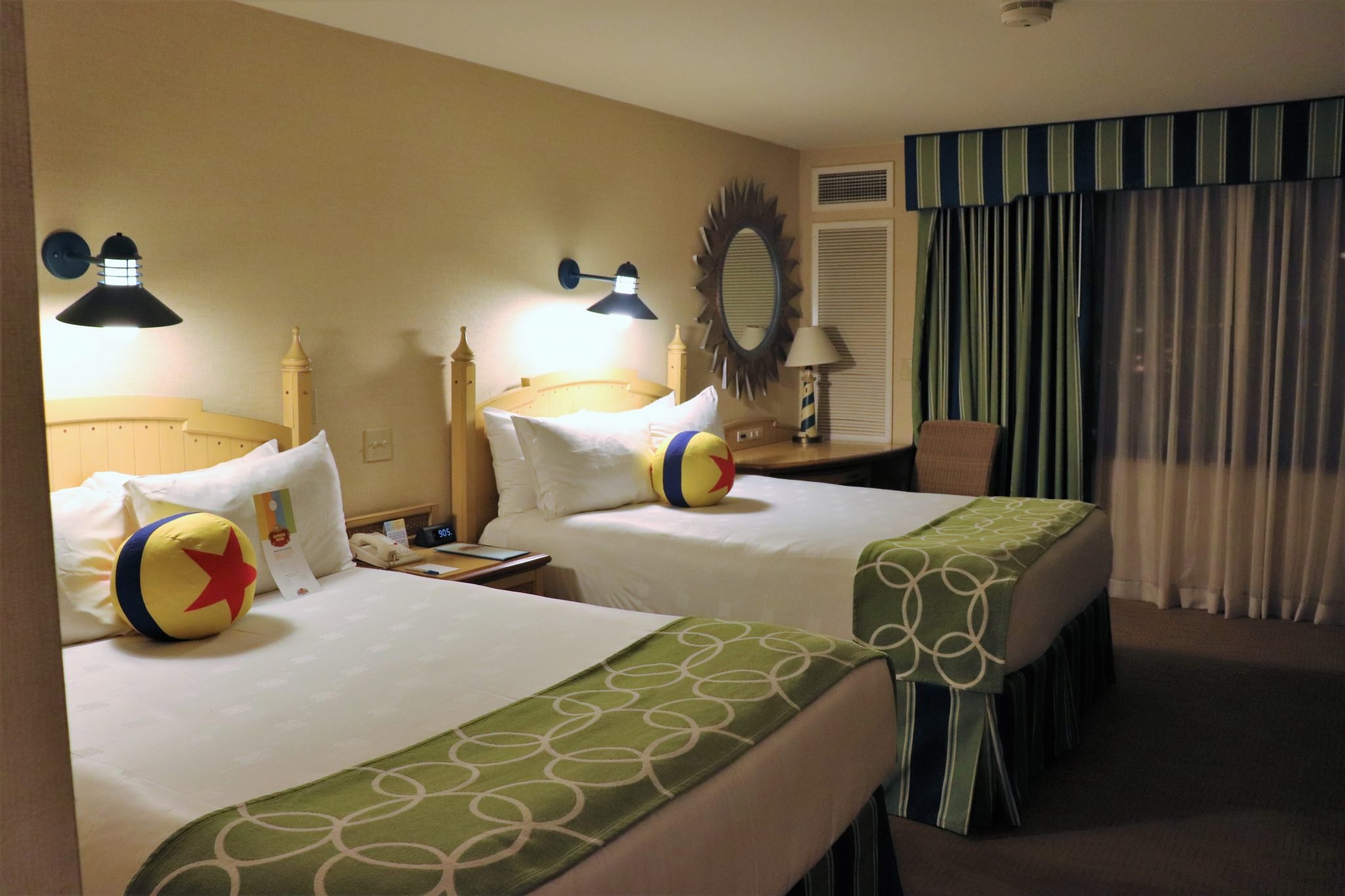 I found our room to be of a very nice size. It felt like a good amount of space. We had three adults in the room and it didn’t feel cramped at all. There were two queen beds, plus a sofa that could pull out into an additional single bed, so the room could accommodate 5.

I liked the decor and set up of the room. The bathroom was basic but also had some fun decorations like the shower curtain. Even though we had a standard view room, we still had a pretty cool view. We could kind of see California Adventure from our window, including Pixar Pier. You could definitely see the ferris wheel and the roller coaster! And they looked really cool when they were lit up at night. 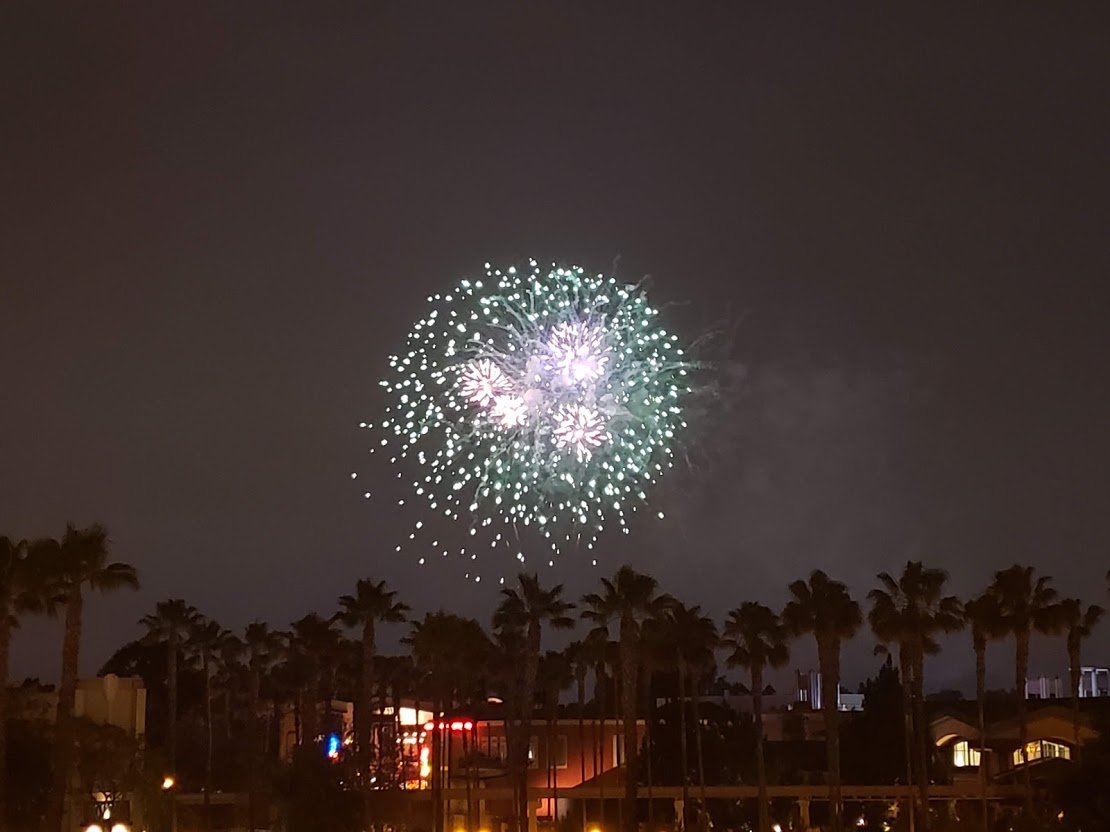 Paradise Pier does have a rooftop pool with a waterslide. We didn’t get the chance to try it out because our visit was so short this time. It looked like a nice pool if not huge. From the same rooftop area you can also see the fireworks! They pipe in the music and while of course it’s not the same as experiencing them in the parks, you get a pretty nice view. We did this on our last night and really enjoyed it.

They also show movies up by the pool on certain nights, have a fitness center, and do a power walk through California Adventure as a group at 6am every morning. Plus you are so close to Downtown Disney that you can walk a few minutes and find plenty of things to do. 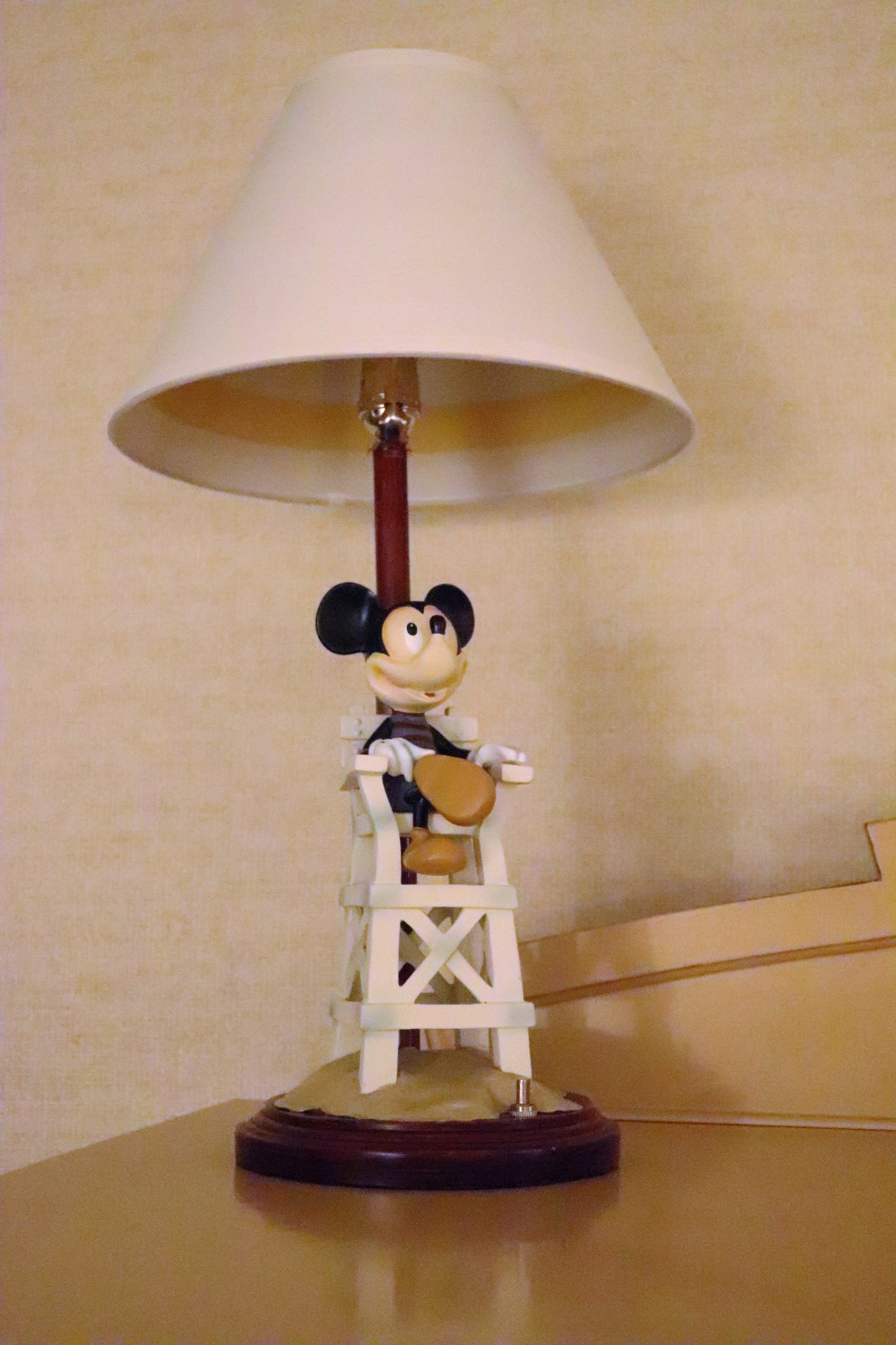 I wouldn’t normally mention the elevators at a hotel but these ones were kind of unique so I wanted to talk about them a little. There are 4 elevators, and when you want to travel on one you tell a central unit what floor you’re going to BEFORE you get on one. It then assigns you to a specific elevator – A,B,C, or D. Once you get on the elevator there are no buttons, it will just take you to your assigned floor.

At first this seemed like a great idea – it disperses the crowds and you don’t have to make unnecessary stops. Unfortunately, it seems like the best plans and ideas are ruined by human beings. We watched impatient people or children punch the number of the floor they were going to multiple times, so that for example all 4 elevators would then plan to stop on floor 5 because it thought 4 different groups wanted to go there. What resulted was every elevator stopping at every floor (a bit of an exaggeration but you get the idea) and everything taking much longer than it should have.

The worst was after the fireworks. We waited probably 15 minutes to get on an elevator. When we ventured to find the stairs, we discovered both sets of stairs have an alarm system and are for “emergencies only.” This was particularly frustrating because we were only one floor above the fireworks viewing location and could have walked the stairs very easily! 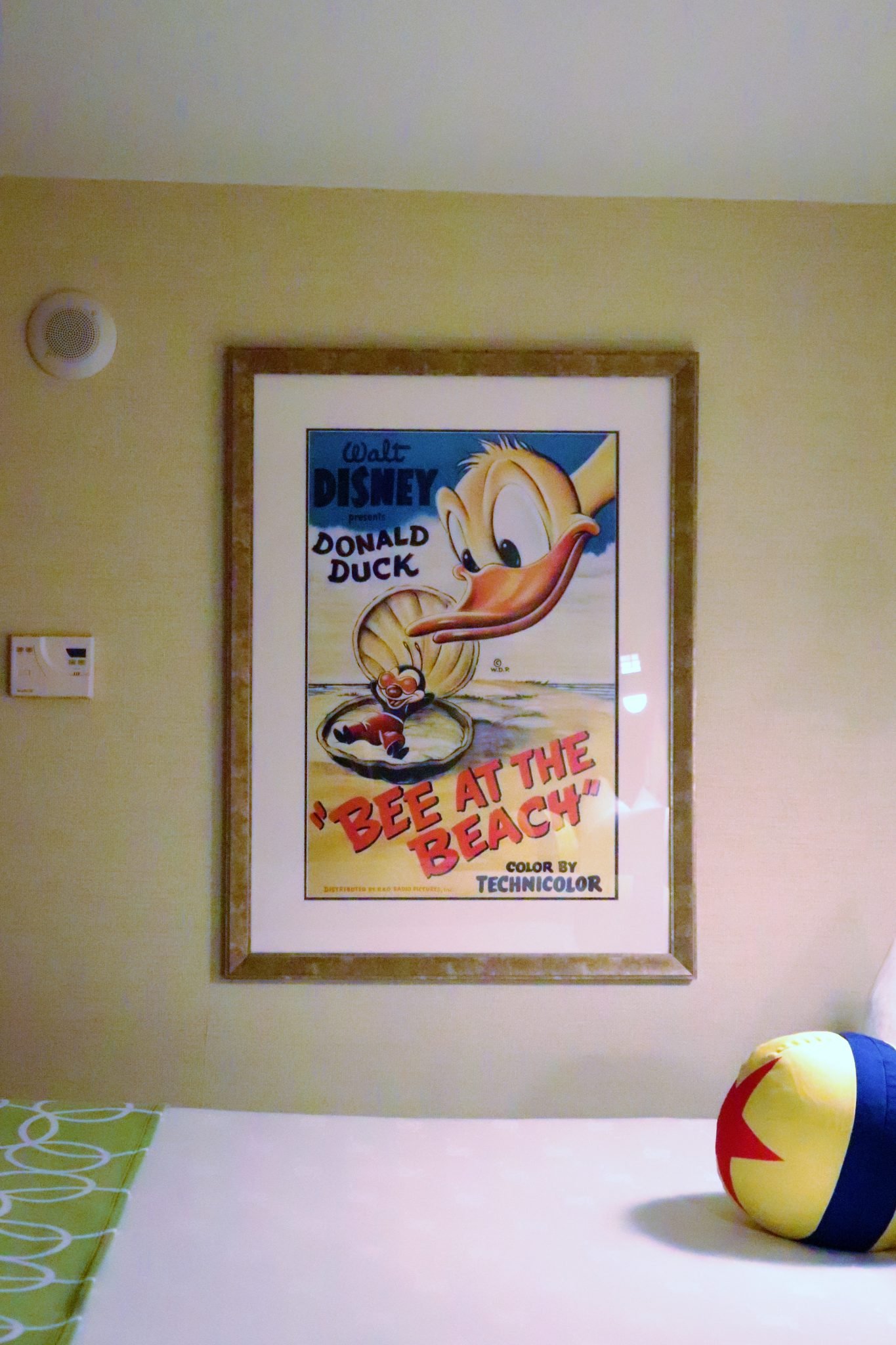 Would I Stay Again?

I definitely would! The location is great and the price is more reasonable compared to the other two Disneyland hotels. While the elevators were a little frustrating I really liked everything else about this hotel – I would certainly recommend it! 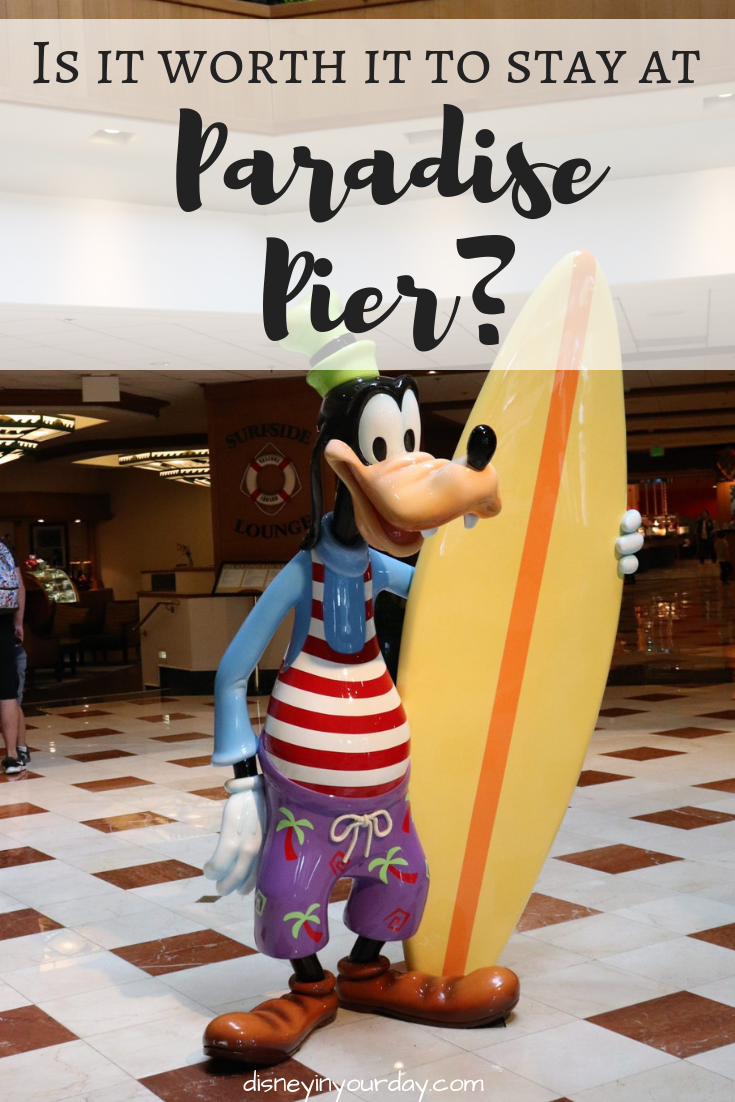