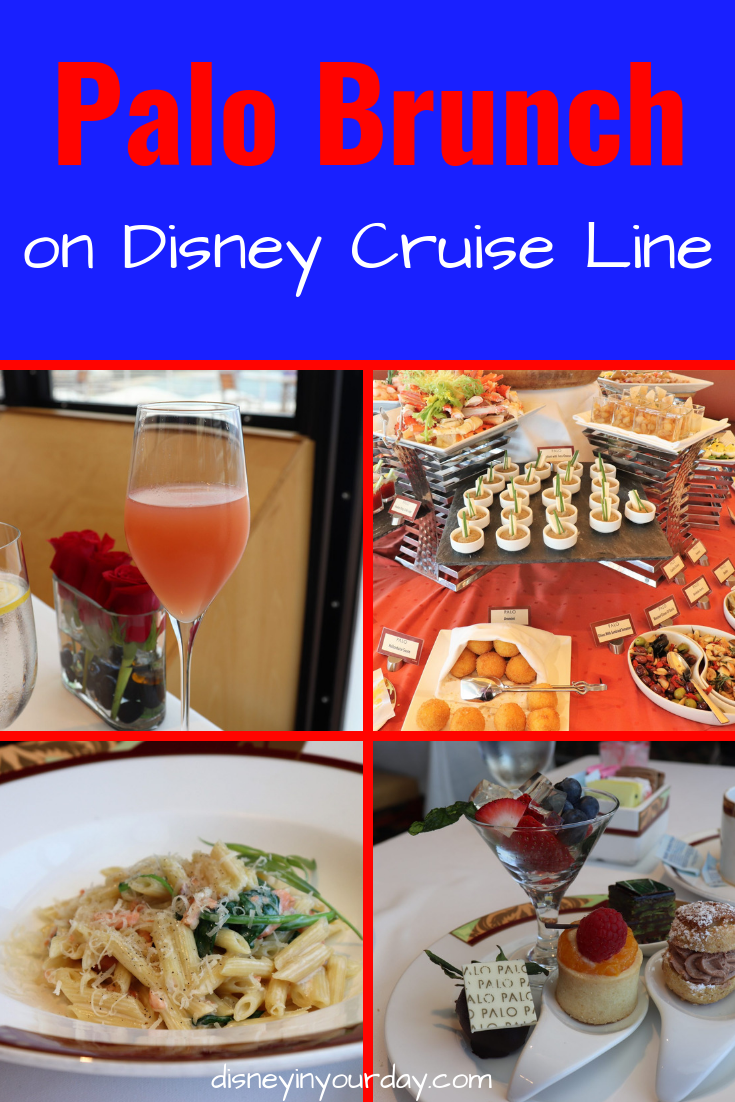 Let’s talk about the best thing i ate on my Disney Cruise on the Magic last May. Without a doubt it was the champagne brunch at Palo. Palo is an extra charge restaurant (most food is included on the cruise), but it is totally worth it. At the time that we traveled it was $30 per person, but it’s now up to $40. Palo is on all of the Disney cruise ships, so you can eat there no matter which ship you cruise!

The brunch is only offered select days of your cruise – usually at sea days and occasionally in port, like on our cruise when it was in Nassau. It also happened to be Jason’s birthday, which made it extra special!  Our server was top notch, and the food was amazing. It’s a combination of buffet and plated dishes, and you can order and eat as much as you want. It’s kind of an interesting combination of seafood and Italian food, which are two of my favorite things! 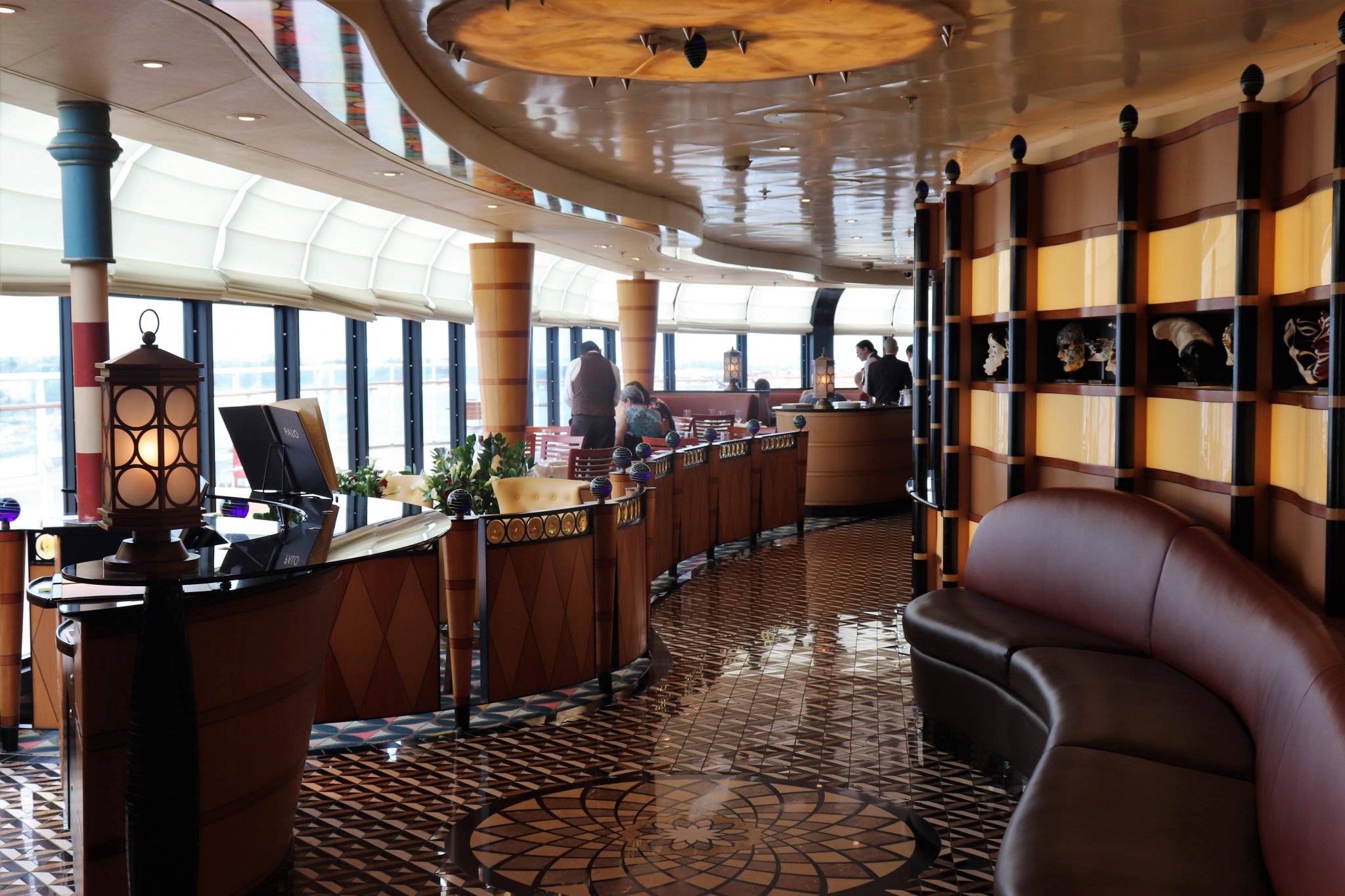 They gave us one bellini included for the beginning of the meal. After that you could pay for additional bellinis or other specialty drinks, including a bloody mary. 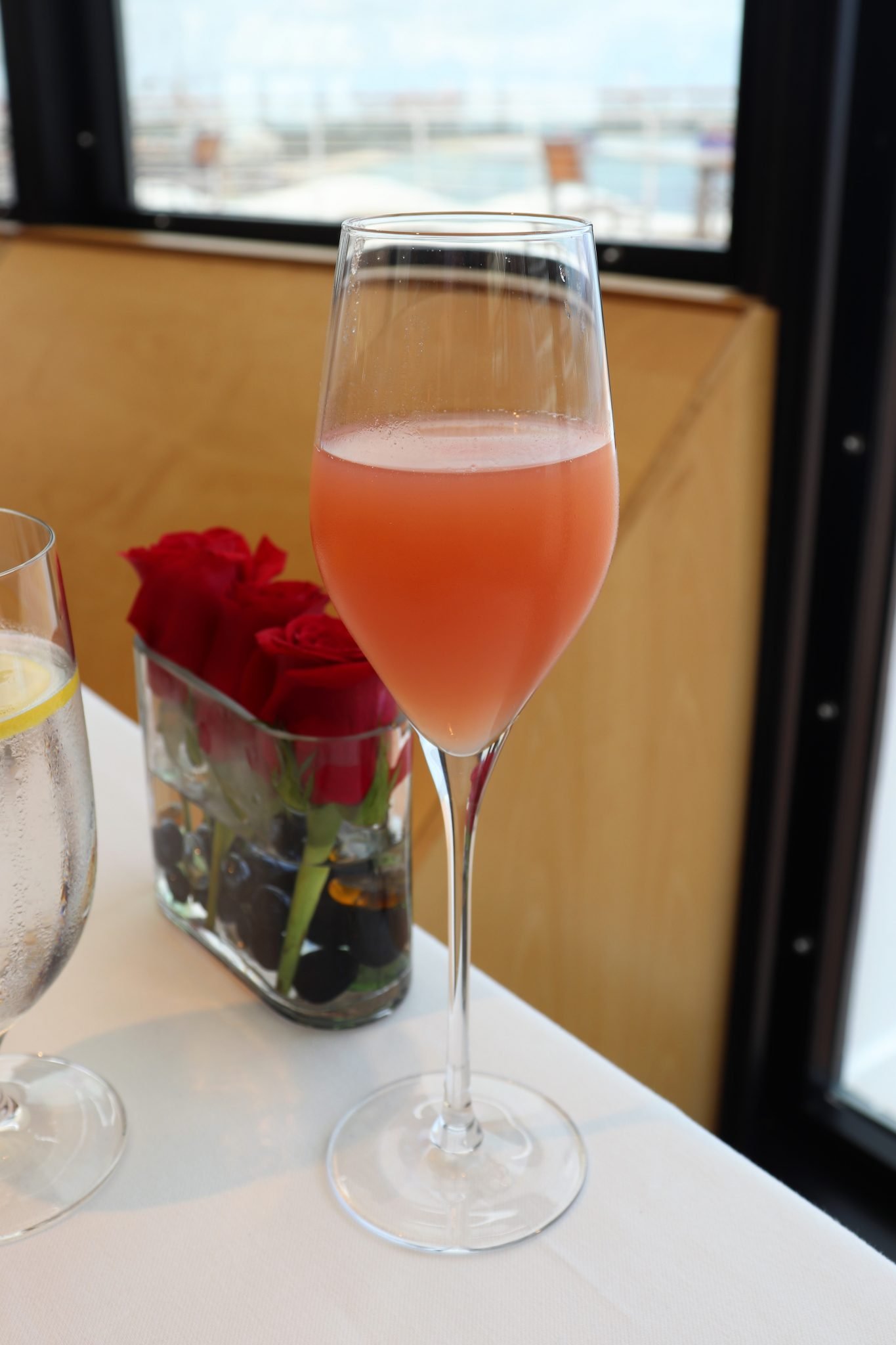 I tried as much as I could from the buffet. Pretty much everything was great, but I’ll point out a few favorites and highlight what I tried along the way as we take this picture tour of all the food! 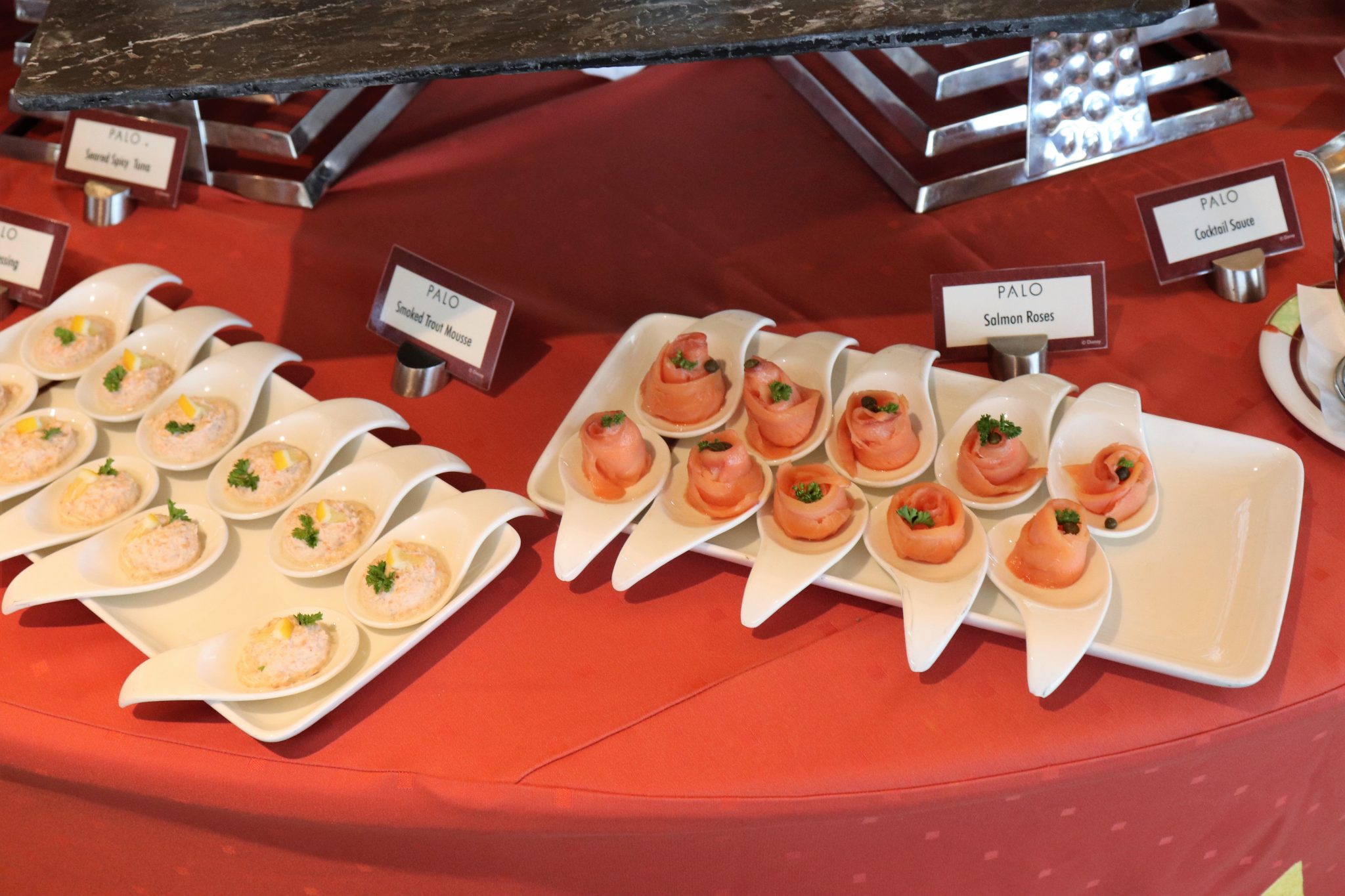 Sea scallop salad and jumbo shrimp. I tried both of these and they were both good but neither were the standouts of the buffet for me: 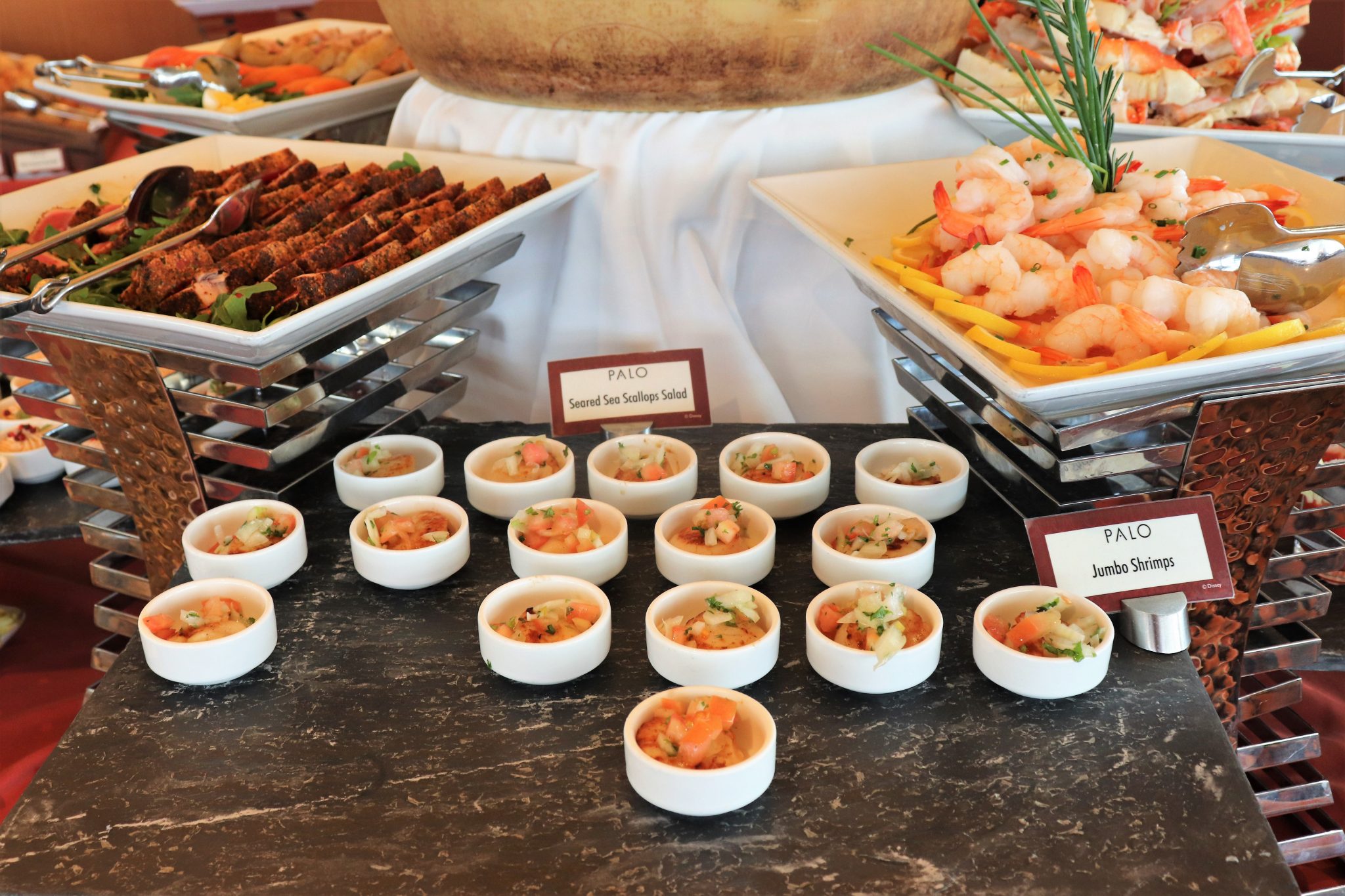 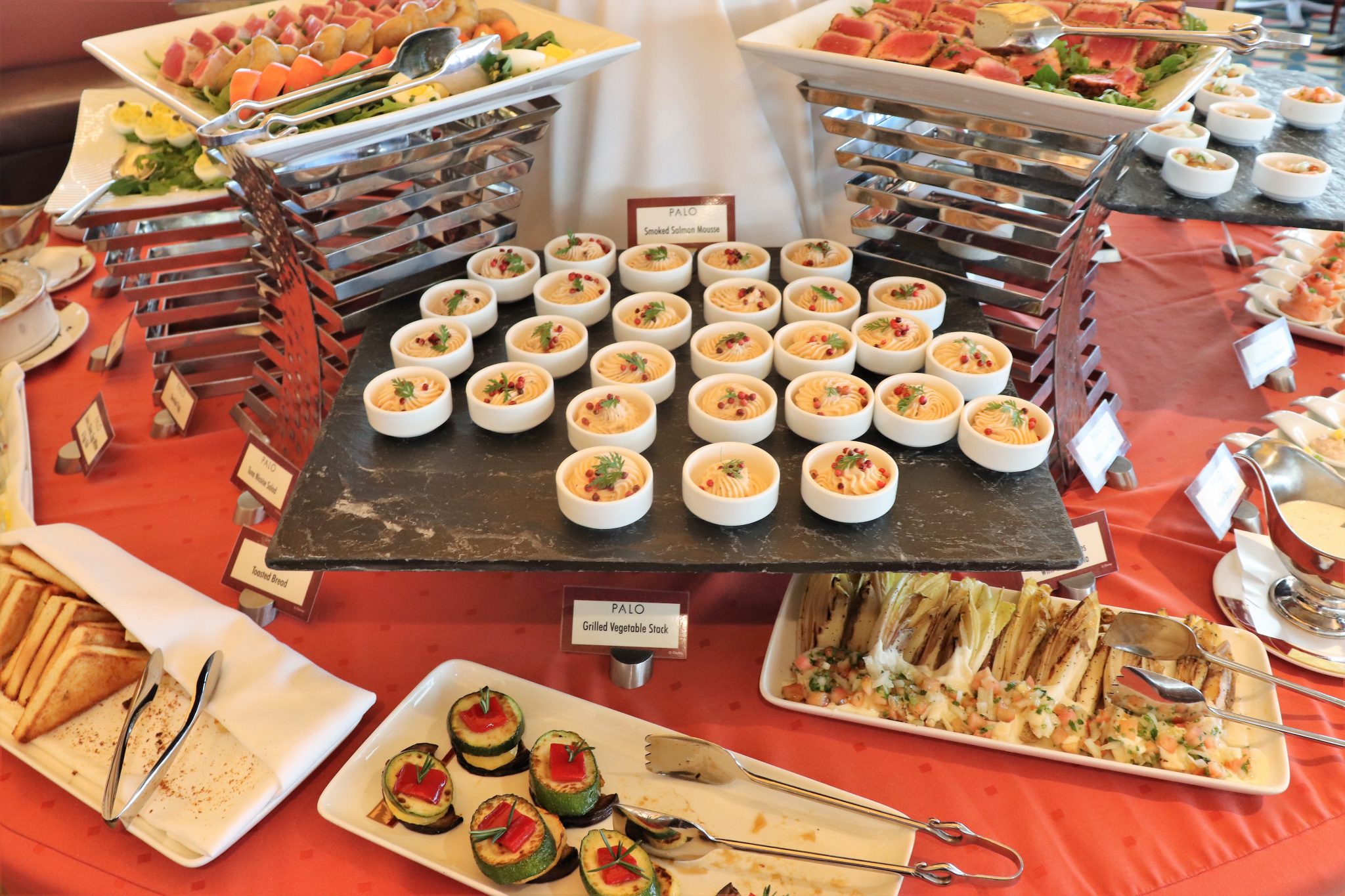 Caviar, deviled eggs, tuna. Of course I had to try the caviar. It’s definitely fishy but it’s also quite salty, and as a salt lover I did enjoy it when it was on some good bread or toast. 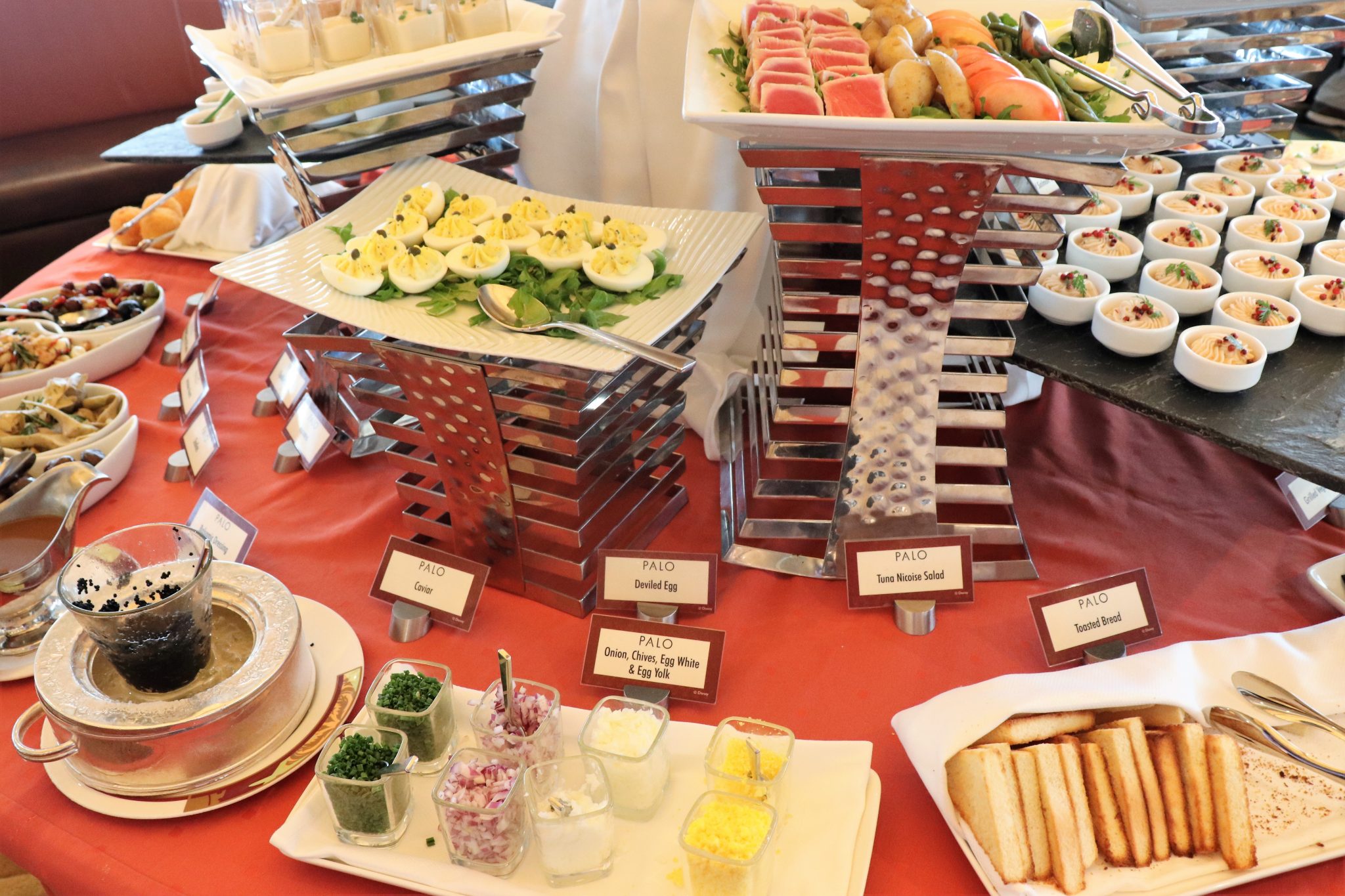 Asparagus, shrimp cocktail, crab legs, Arancini, and a few other things.  The crab legs were sweet and delicious, and they were already cut open so you didn’t have to do any work. That’s when you’re really living the high life!  The Arancini was actually slightly disappointing – I didn’t think it had a ton of flavor. 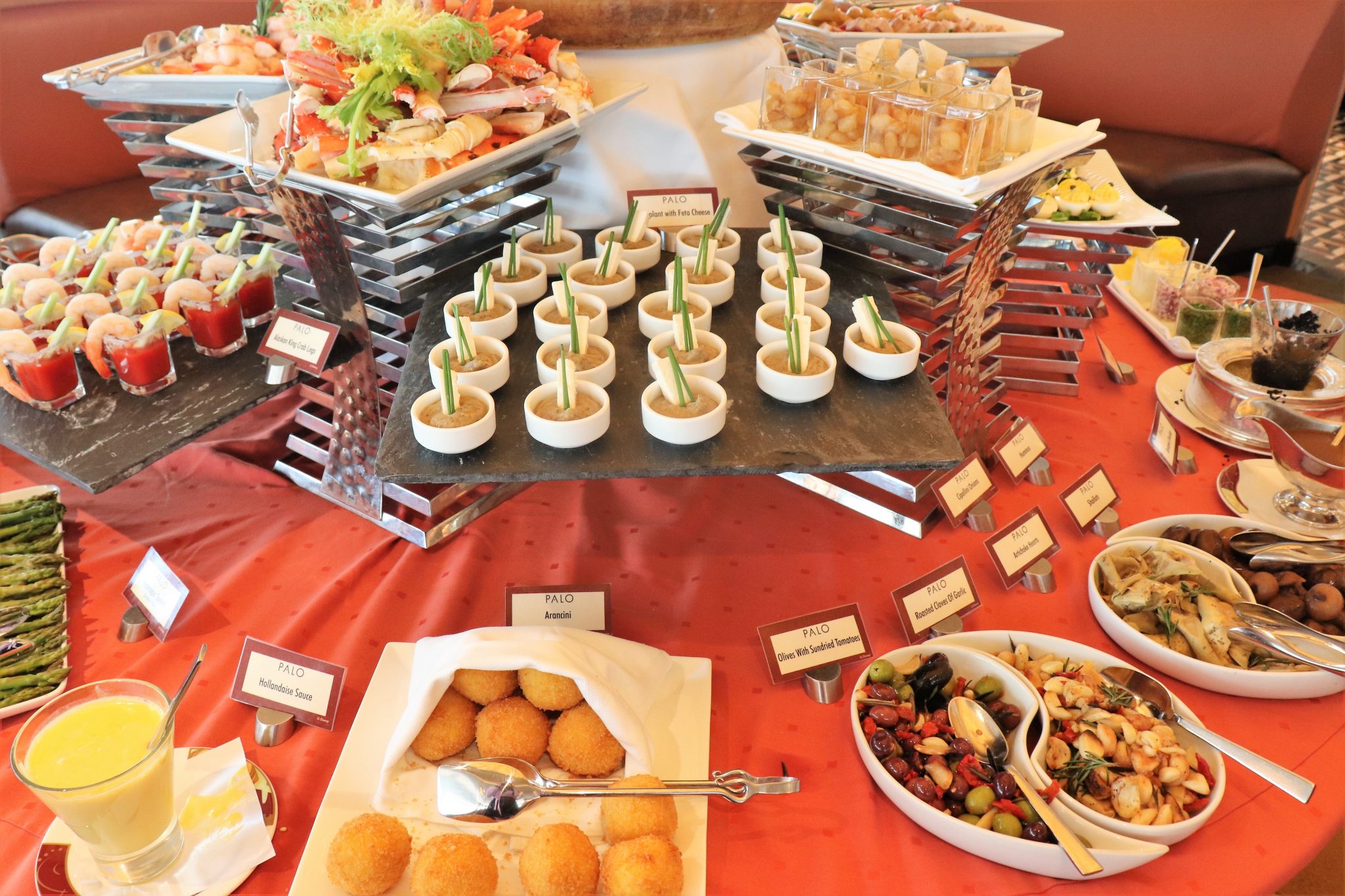 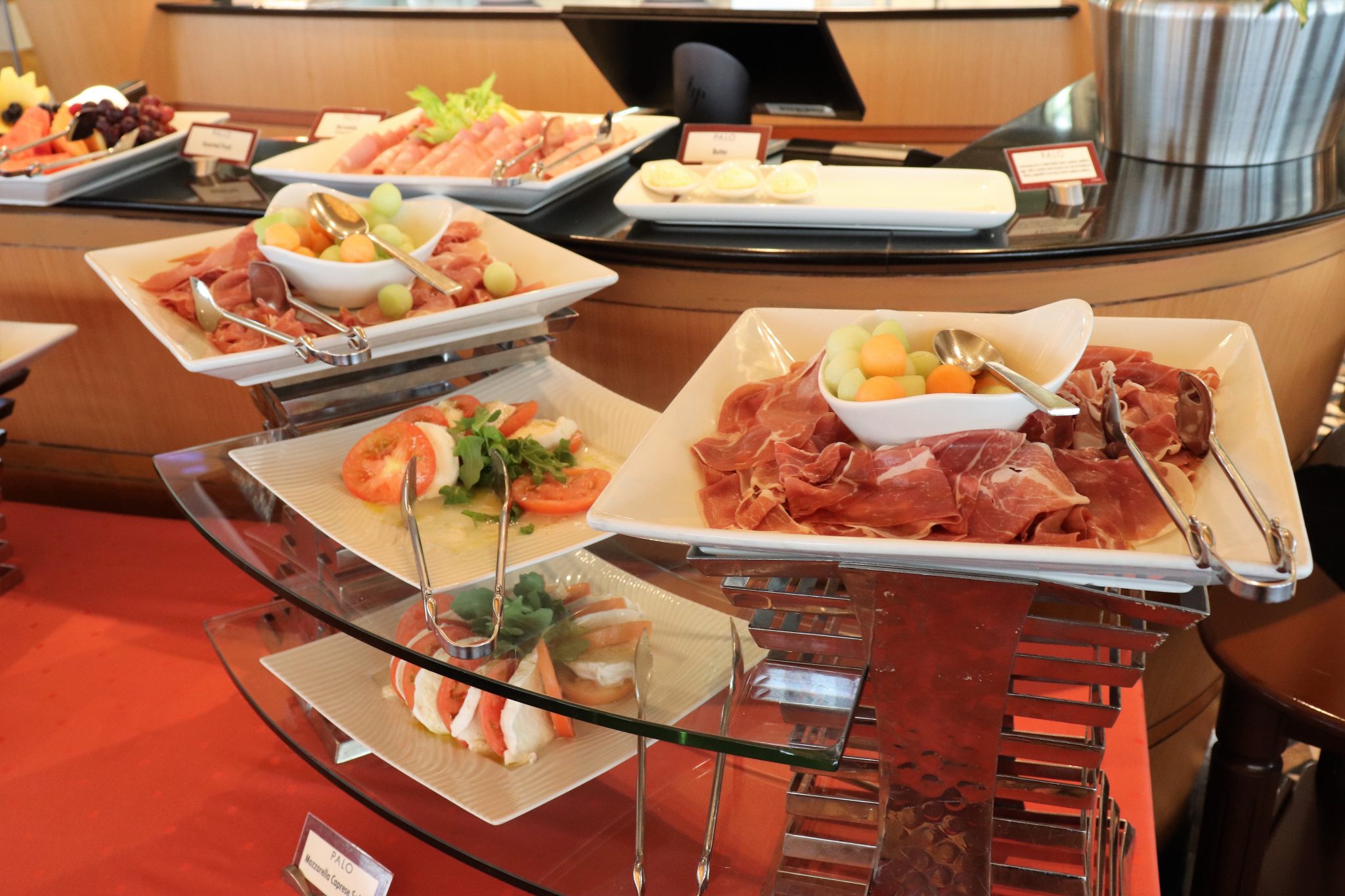 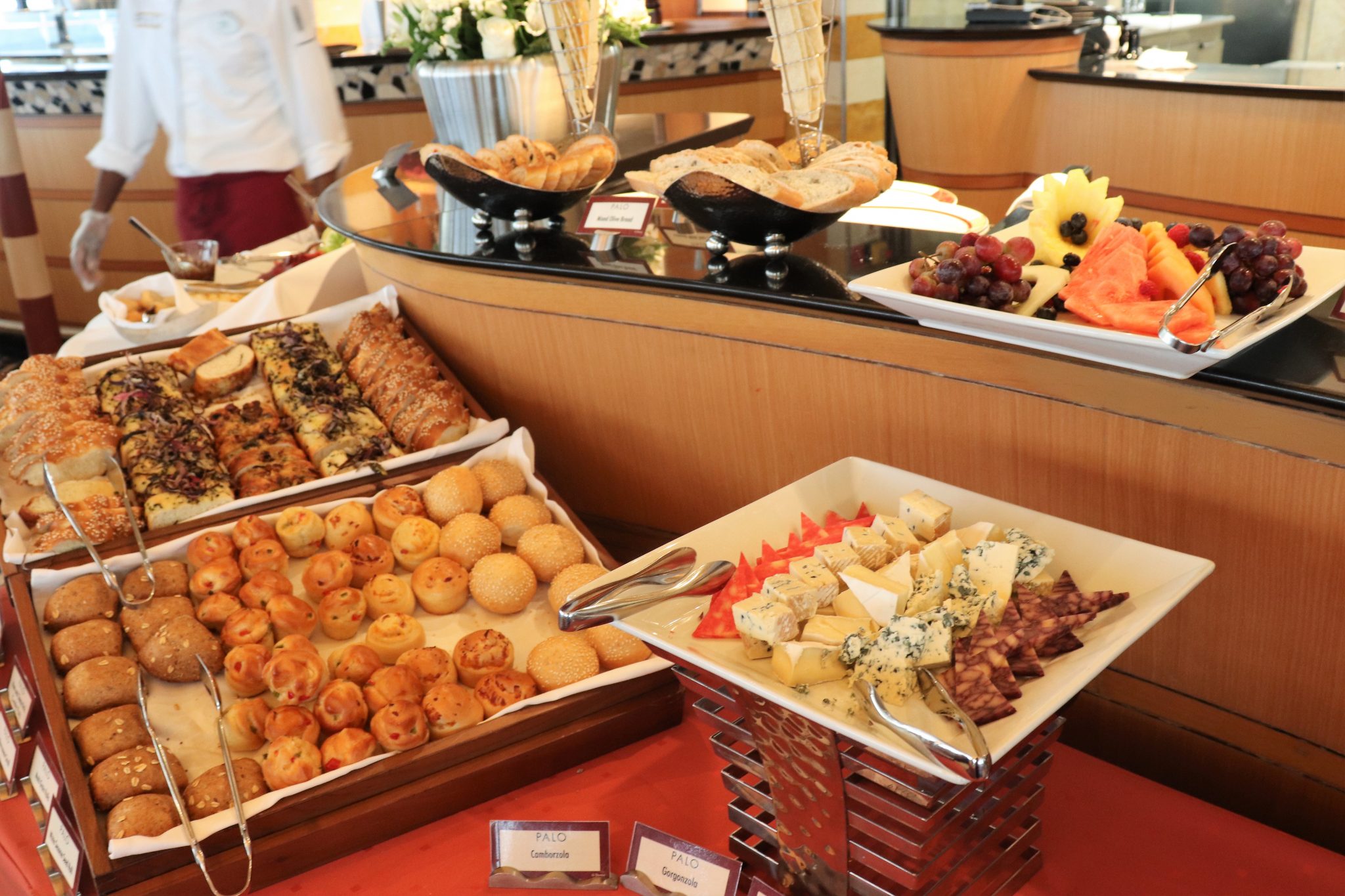 And in case those breads aren’t enough, there are a ton of pastries. So if you like the sweeter things such as croissants, cinnamon rolls, etc., you’re in luck! 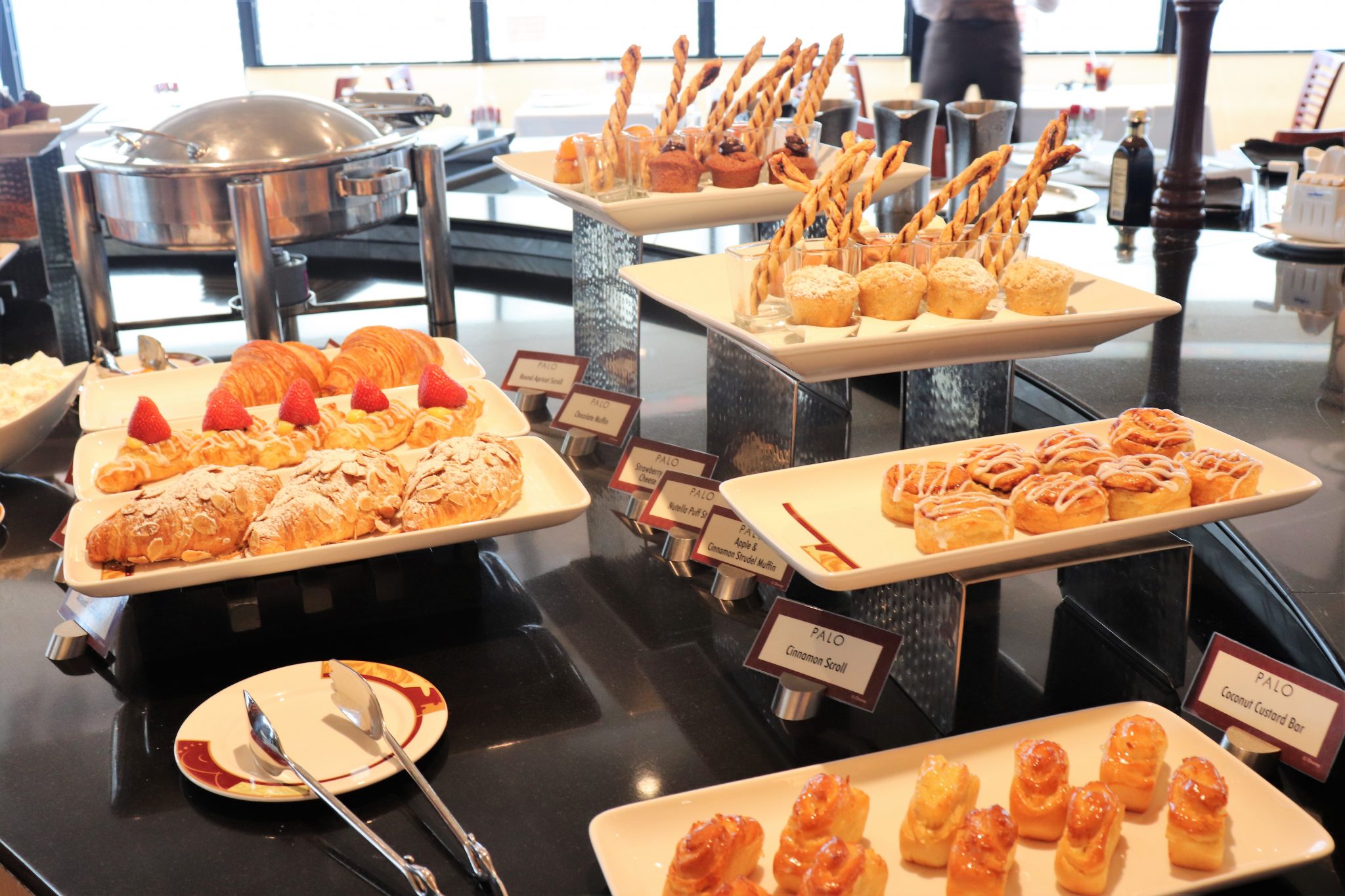 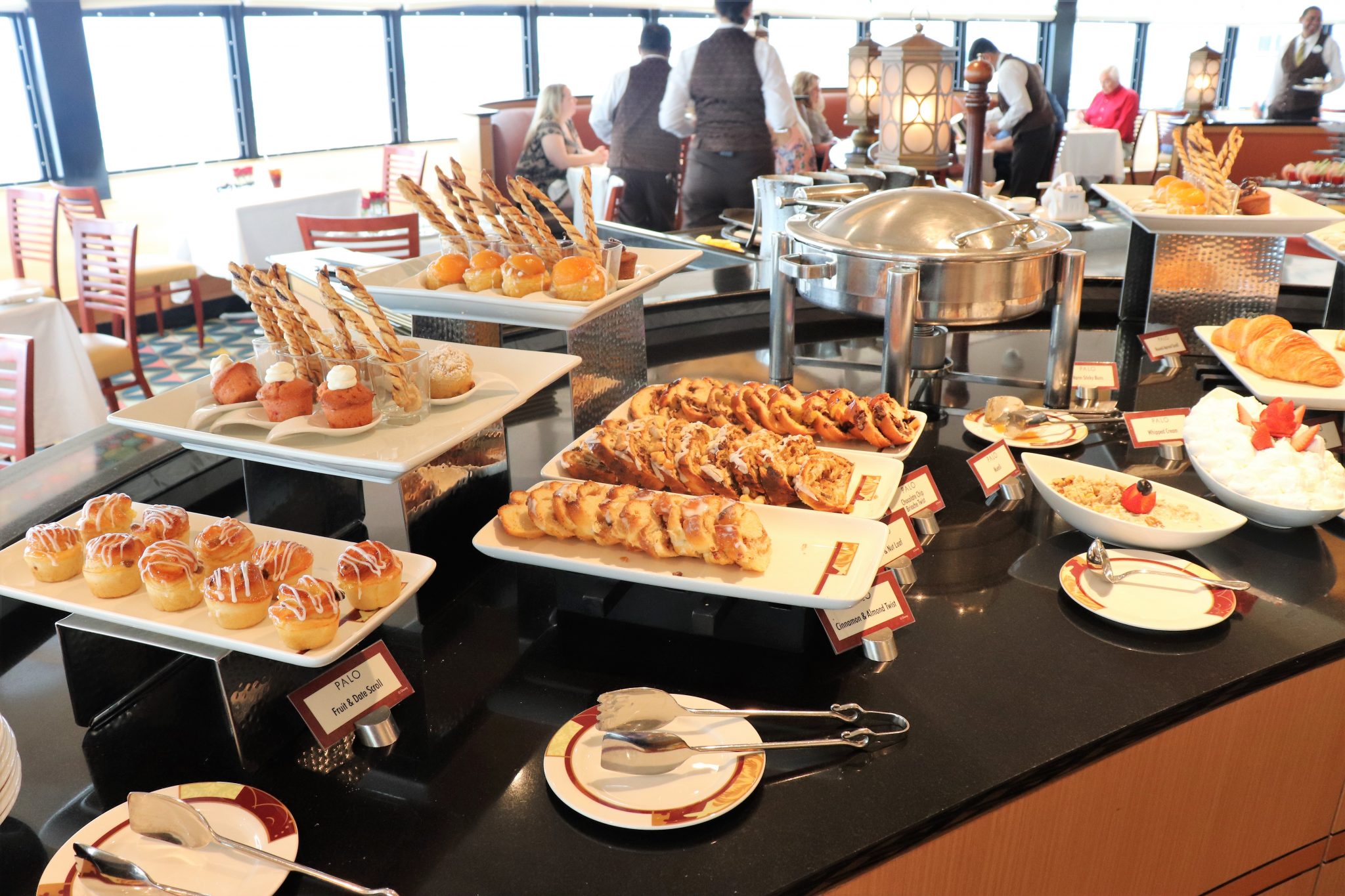 But you know, just in case all of the food on the buffet isn’t enough, they also have a plated menu. You can order more than one thing if you want to, and our server was eager to bring it all! I got the eggs benedict, which was very good. I was grateful it was only one on the plate since I had eaten so much at the buffet… but when my benedict was half gone the server was already asking me if I wanted another! 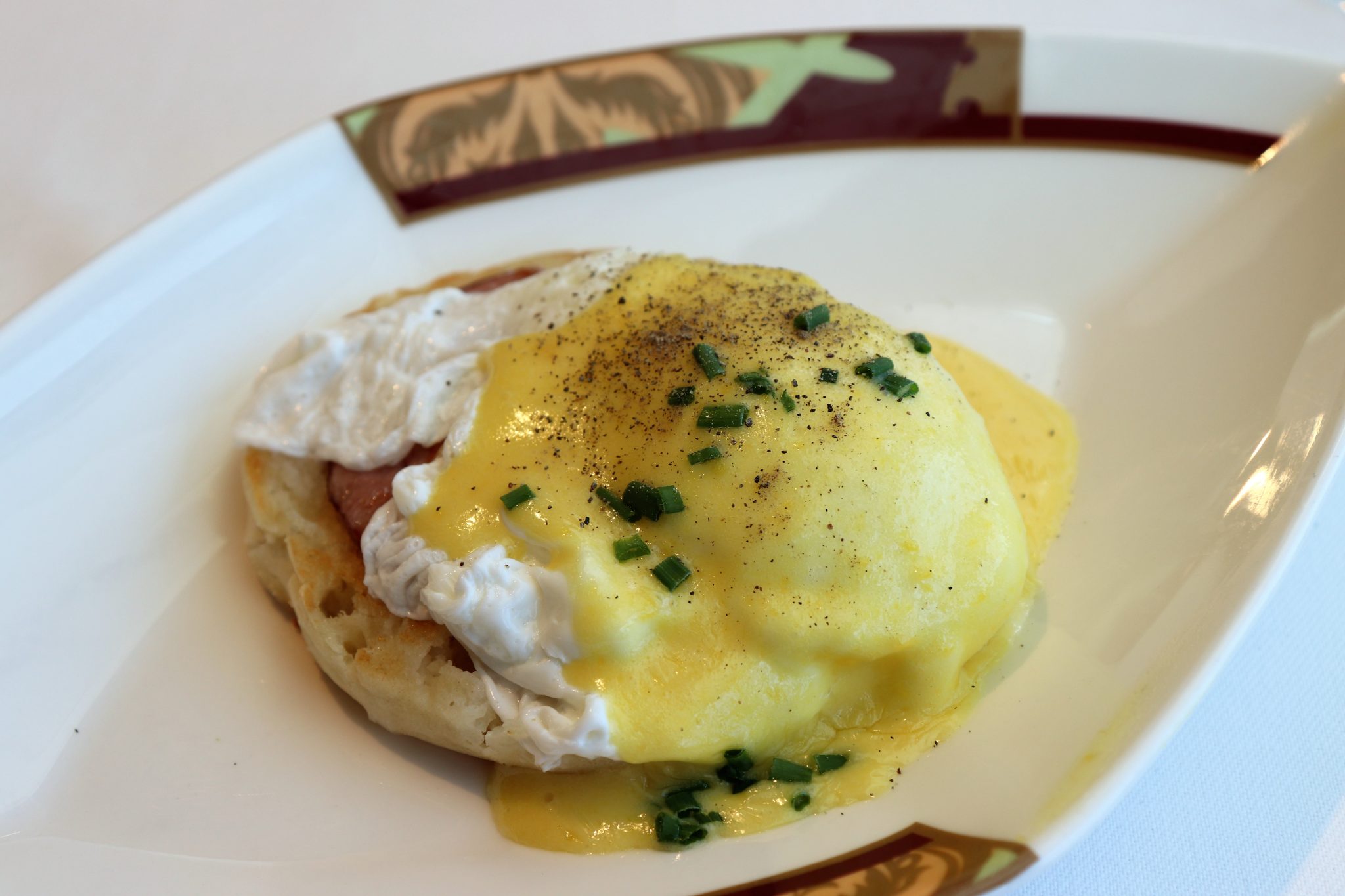 Jason went with more of a lunch option for this plated meal and did the Pennette Pasta (with smoked salmon, baby spinach, tarragon, cracked black pepper, and cream). Of course I had to try this and I absolutely fell in love with it. Definitely the best thing I ate on the cruise, and I probably ate at least half of it for Jason. My mouth is watering just thinking about it. Hopefully we can do Palo again on our next trip just for that. 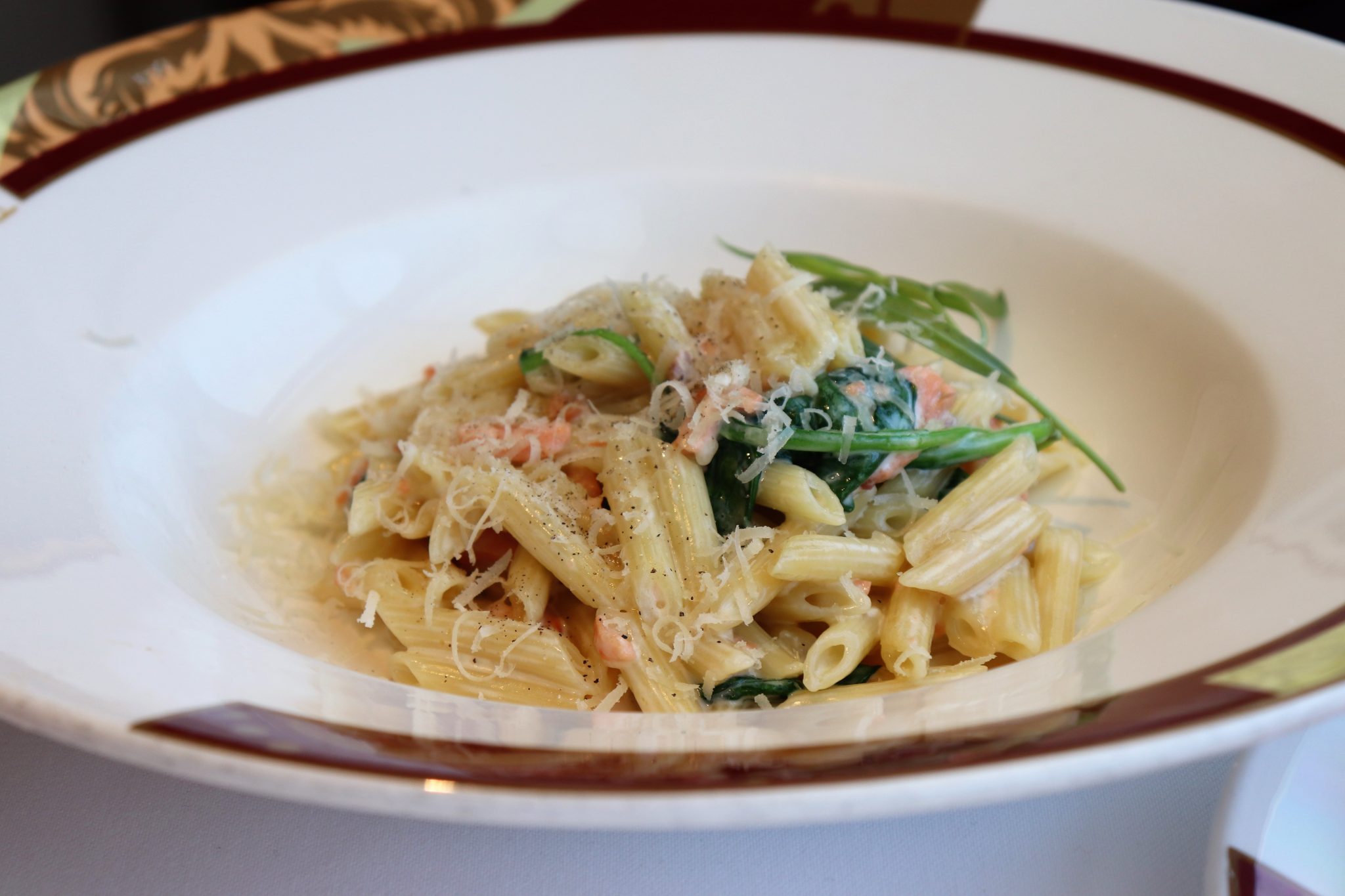 But we’re not done yet, because… dessert! There is a whole section of the buffet dedicated just to desserts. They come in tiny portions so you can try a bunch. And our server reassured us that they also had magic calorie-free spoons which took all of the calories out of dessert… 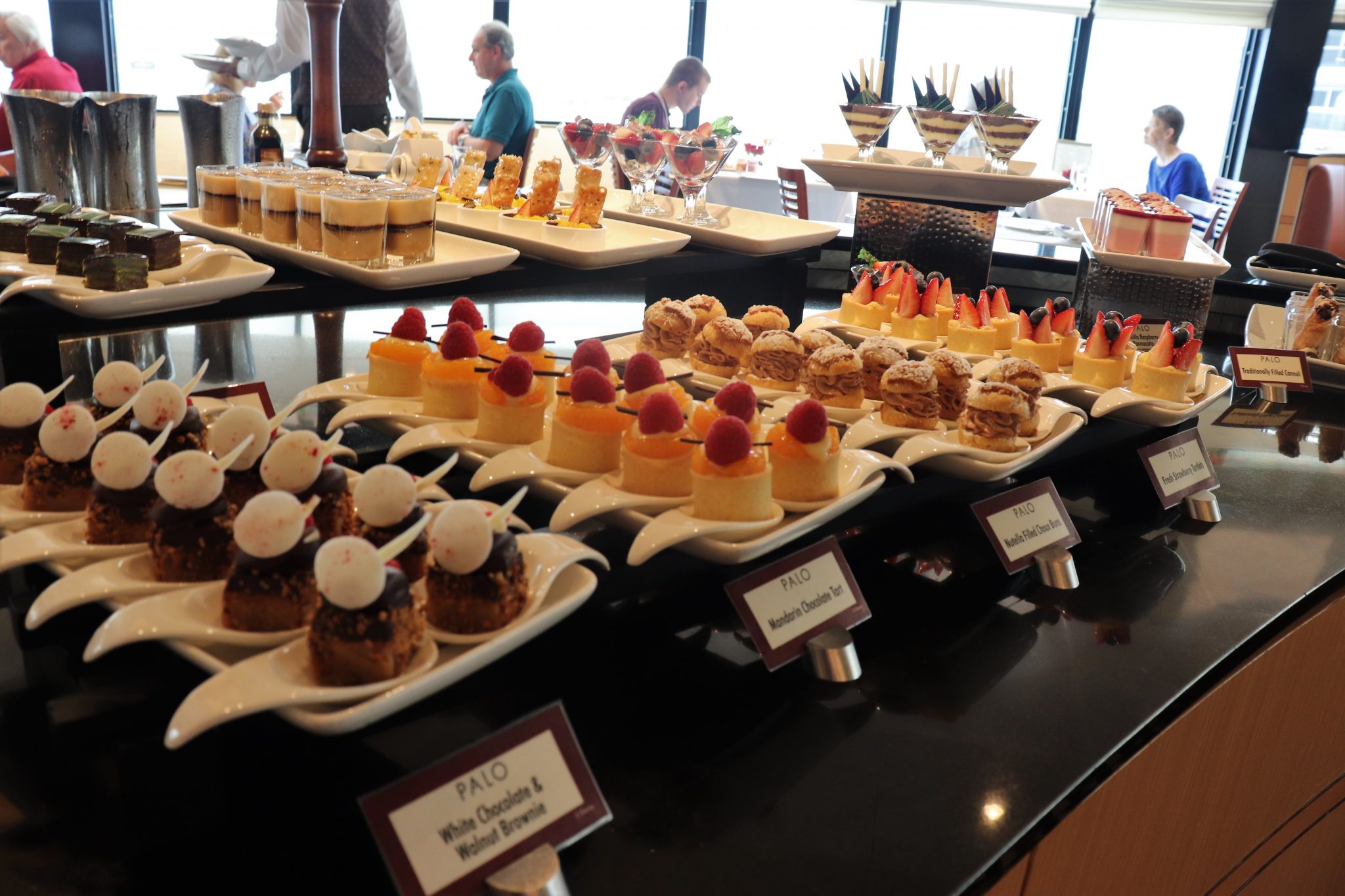 Here’s the selection of desserts I got to sample. That fruit cup in the martini glass also has cubes of champagne flavored jello. It might have been my favorite thing I tried there. 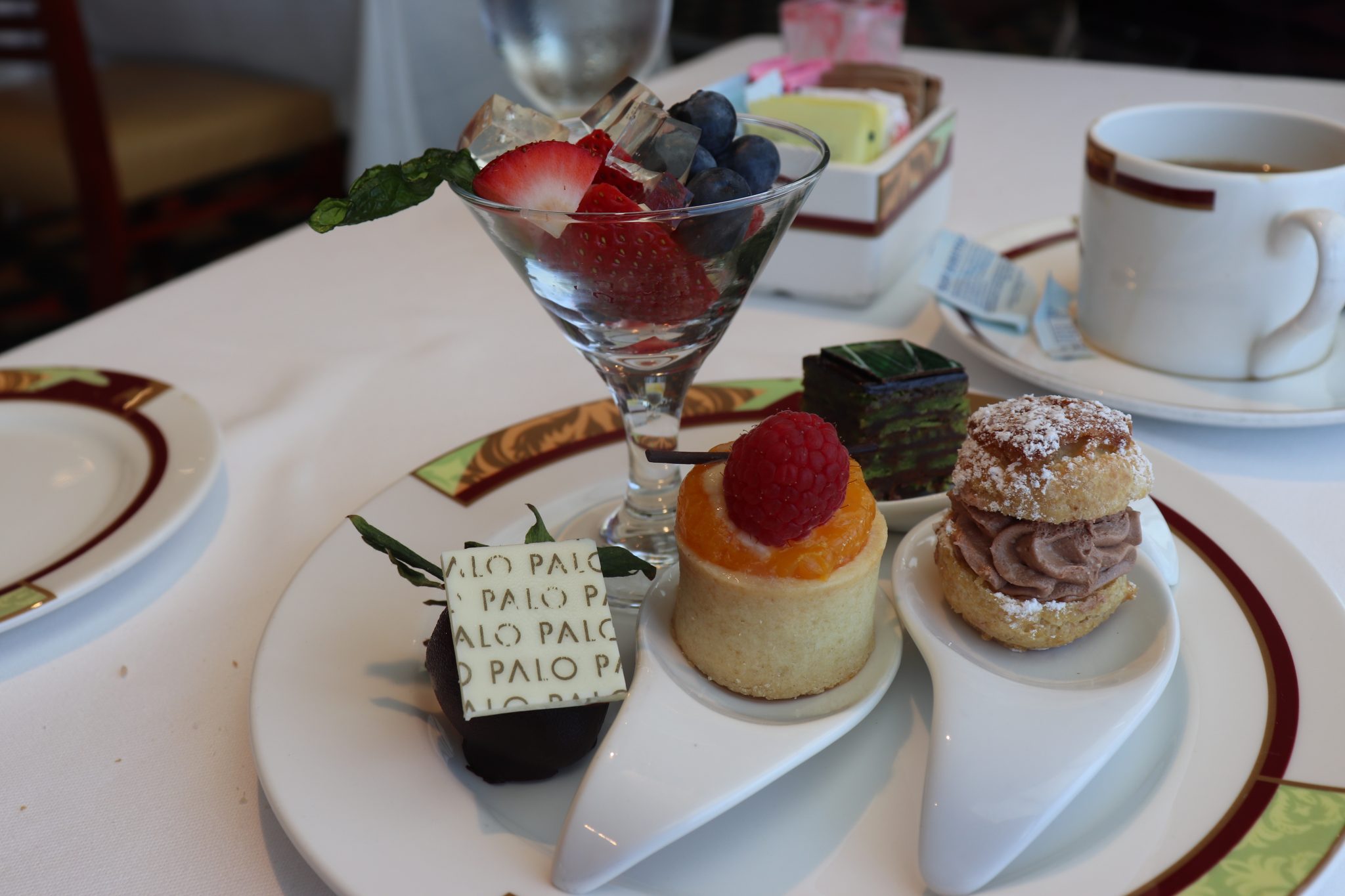 But the best dessert we had was one our server brought us from the kitchen – a chocolate lava cake. This was just crazy good. 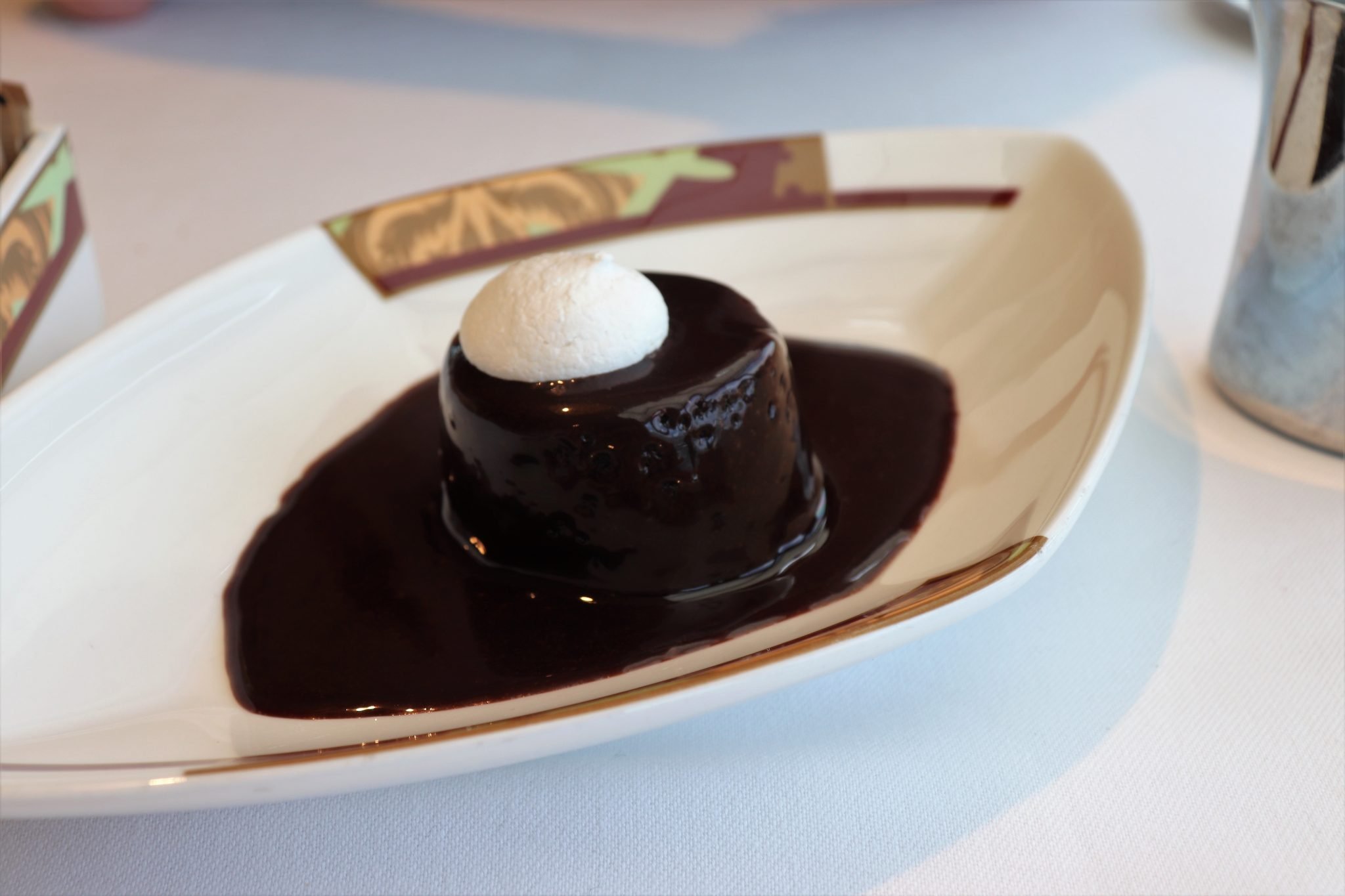 Since it was Jason’s birthday, they also brought out something special for him. 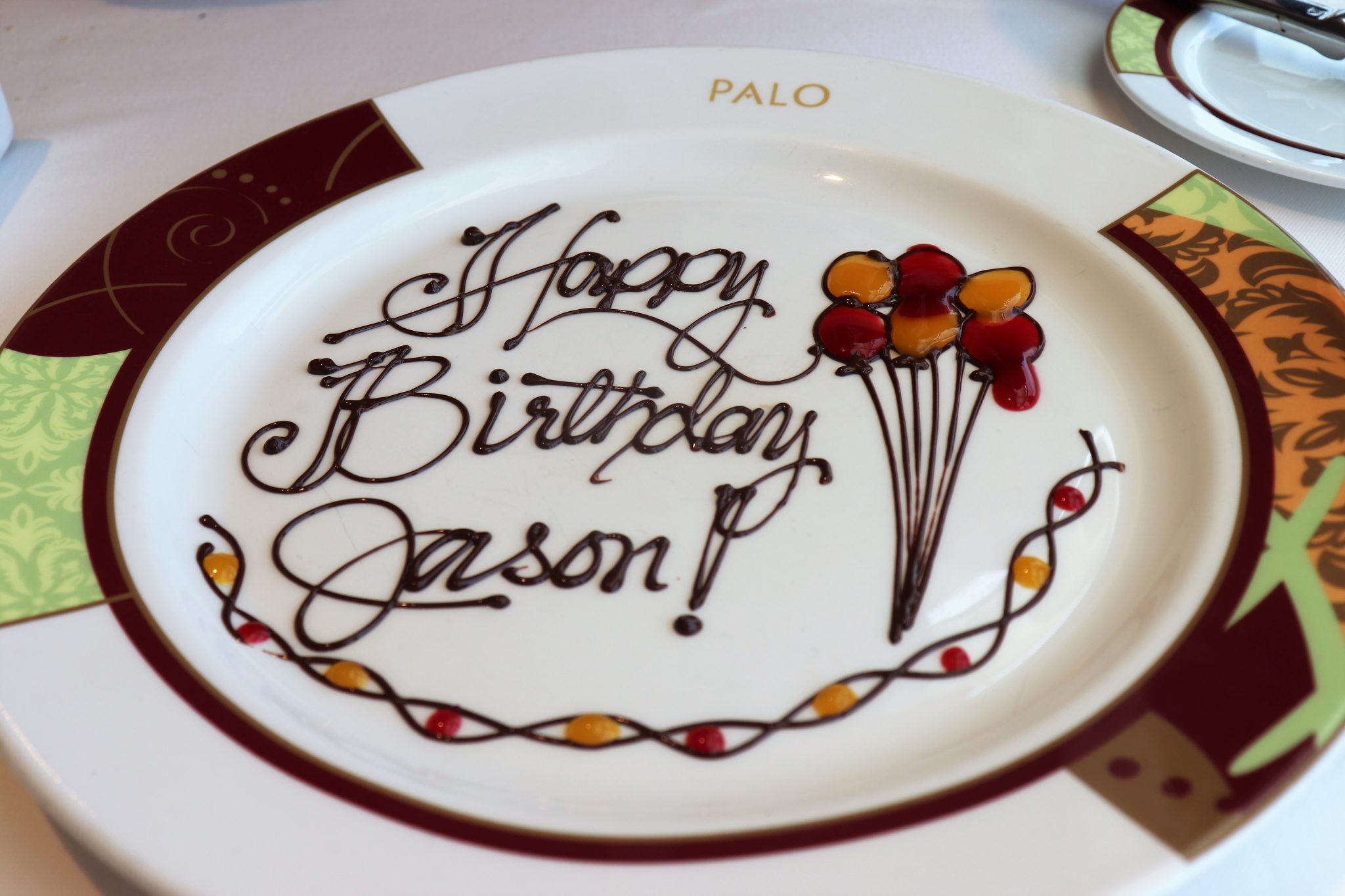 Also our server insisted he could bring us more, we unfortunately could not eat another bite. We’d had so much amazing food, there was no doubt it was worth the extra $60, especially for a special occasion like a birthday.

Which items would you be most interested in trying at Palo brunch?