You are here: Home / At Home / ODDyssey half marathon recap 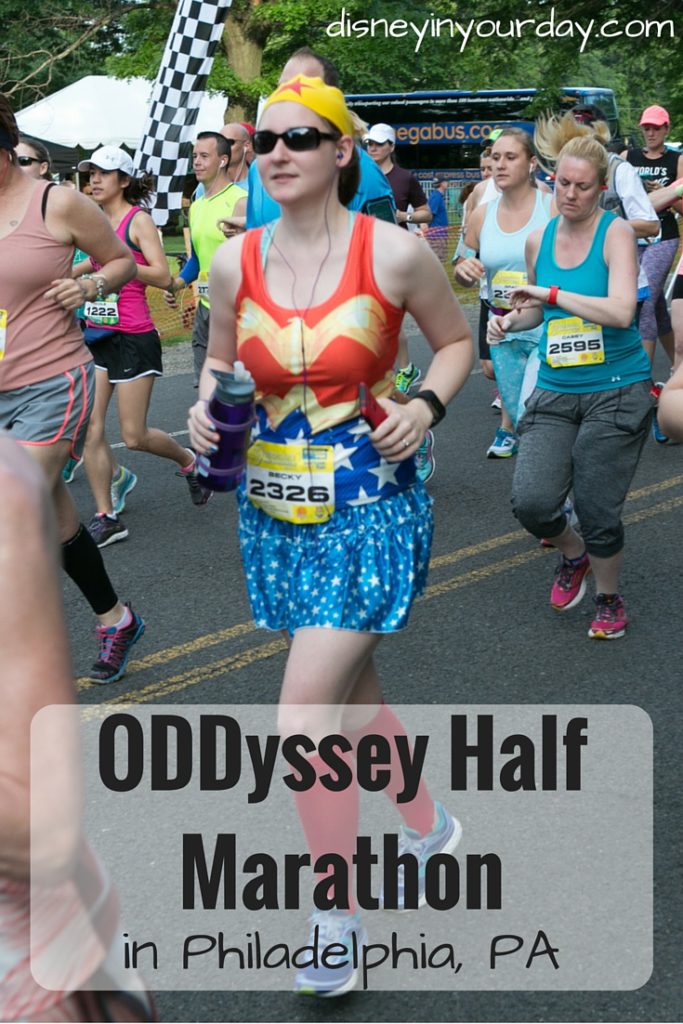 I’ve been trying to keep up with running in preparation for the beginning of marathon training, so I signed up for a half marathon this June, on Sunday the 12th.  It was in Philadelphia and called the ODDyssey half marathon.  I like races that have something a little unique to them, and this one definitely qualifies!  They feature surprise challenges along the race course (not revealed until race day), encourage costumes, and have a pretty good after party.

When I arrived at Fairmount Park in Philadelphia at 6am it was already really warm – at almost 80 degrees.  I knew it was going to be a tough race weather-wise.  We hung out before it started and looked at some of the really fun costumes.  I’d say maybe 30% of the people there had a costume of some sort, even if it was a simpler one.  We saw lots of superheroes.  I was not the only Wonder Woman!  I had this awesome skirt thanks to Glitter Skirts – use code “Becky” for 20% off your order! 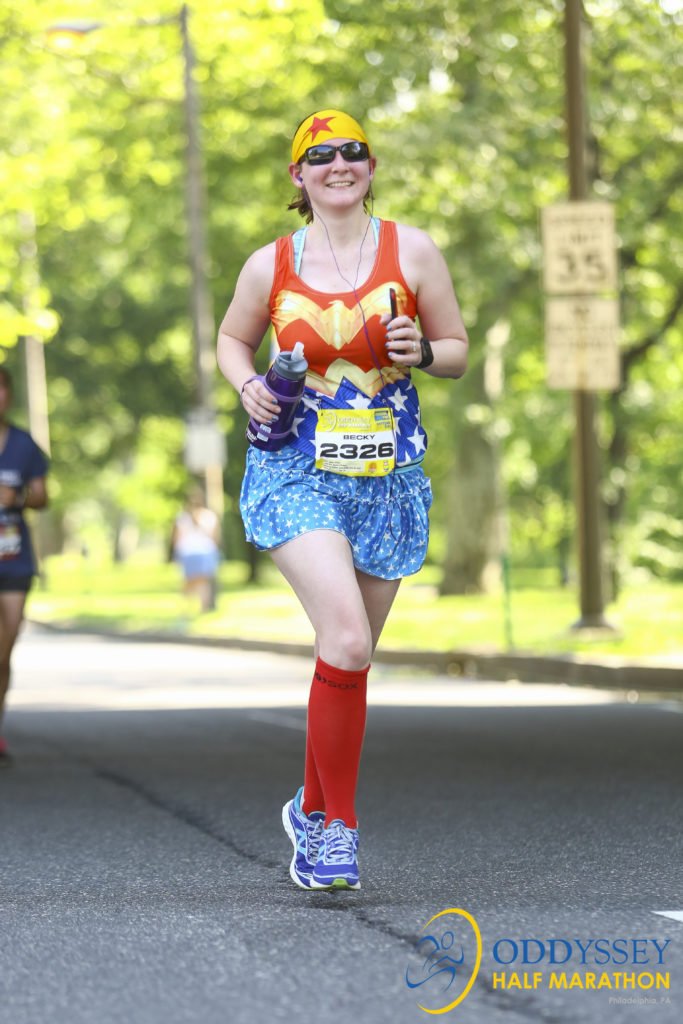 The started us in corrals but they were only spaced a couple of minutes apart, so it was around 7:08 that I started.  The course was pretty nice throughout, and thankfully a lot of it was passing by trees which provided some shady.  There was also a breeze now and then, but it was still quite hot.

I was excited to see what the “surprise challenges” would be, but unfortunately there weren’t that many and they were rather underwhelming.  The first was a sign that said “Oddyssey half marathon” and the O was cut out so you could jump through it.  The rest of the stops were carnival games.  There was one around mile 4 which was throwing a softball at cans to try and knock them over.  Then we didn’t see another one until mile 10 – some sort of ring toss and no one was interested by then.  And the last one wasn’t until mile 12.  People were so ready to be done that the volunteers were trying to beg people to stop and play with them!  There needed to be more, or at least have them earlier. 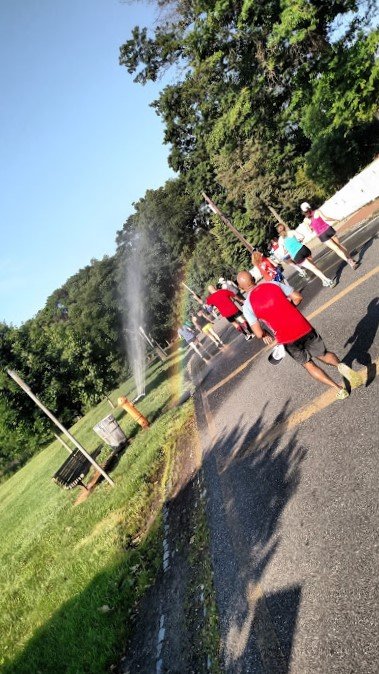 The other thing they did that I really appreciated was that they turned on all the fire hydrants on the course so they were spraying water on the path.  It was like running through a sprinkler and it felt amazing.  In the morning light one of them even created a rainbow that was just beautiful.

I had overestimated my running skills in the heat, because I realized I started out too fast by about mile 6.  I felt tired and done by that point and I wasn’t even halfway done.  I’d never done such a long distance in such warm weather and I should have taken it slower from the beginning.  But I slowed down a bit for the second half and felt a bit better. 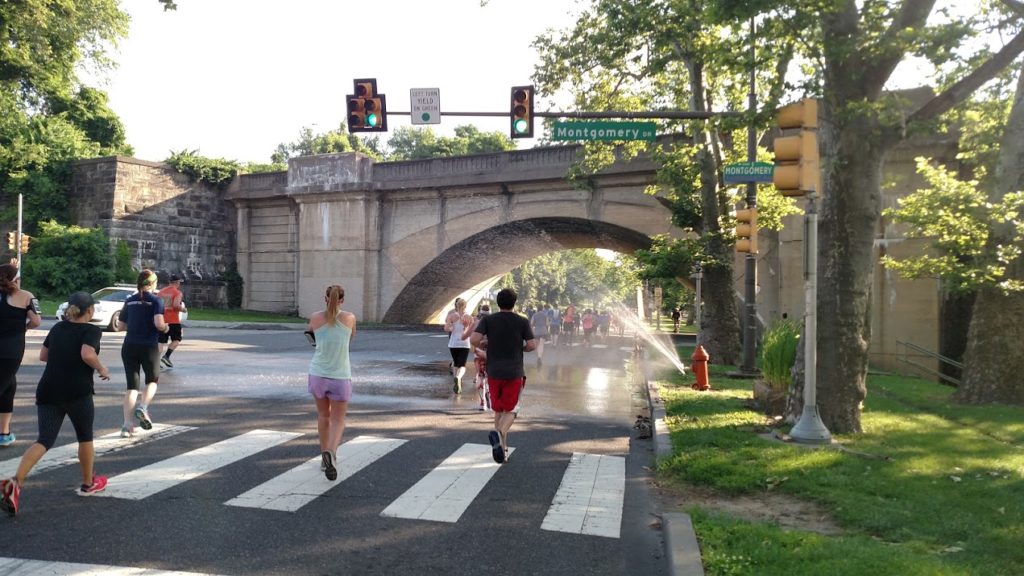 We’re about 12.5 miles into the race (basically, almost done) – and then comes… the hill.  It turns out that the last half mile or so of the course was all uphill.  What a killer way to end things!  I was pretty miserable on the way to finishing.

But finish I did, I 2 hours, 38 minutes and 27 seconds.  That put me at a pace of 12:05 minutes/mile.  I was really hoping to keep it under 12, but given the heat I’ll take it.  And I got my medal, which also doubles as a bottle opener!  Grabbed my snack bag and headed right for the beer garden to redeem my free beer and get my free pint glass. 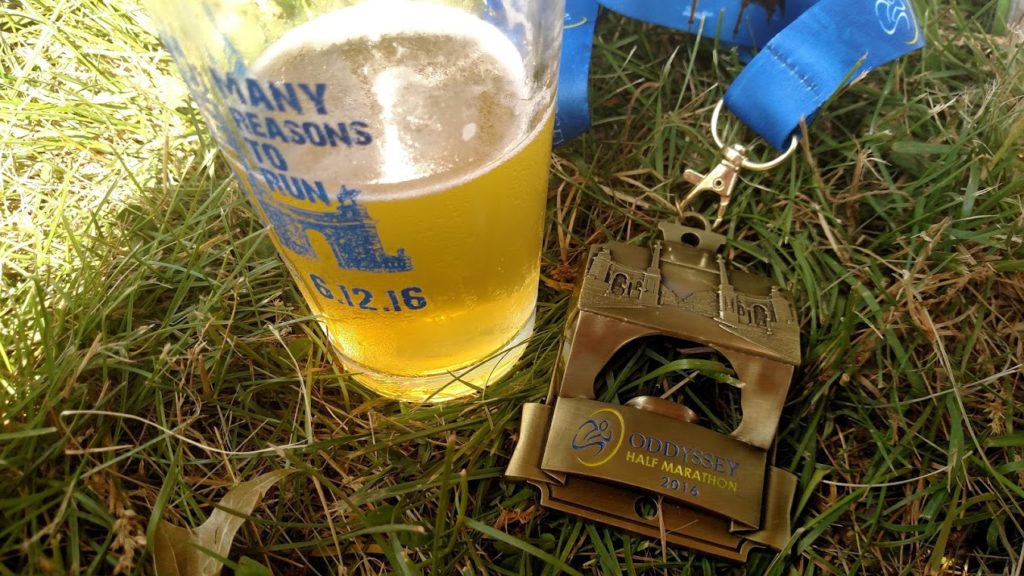 The beer they had was Sly Fox’s summer ale and it was absolutely delicious.  The Sly Fox Brewery is actually literally down the street from me so we go there a lot, but I hadn’t tried that one yet.  I wasn’t sure if it just tasted extra good because it was after a half marathon, so I convinced my husband to take me there for dinner that night so I could try it again – still delicious 😉

Overall I did have a lot of fun at this half marathon and I think it would have been even more enjoyable if not for the heat.  As long as it falls on a weekend I’m free next year I’ll probably do it again!

What do you think of this half marathon?  If I go next year, what costume should I do?