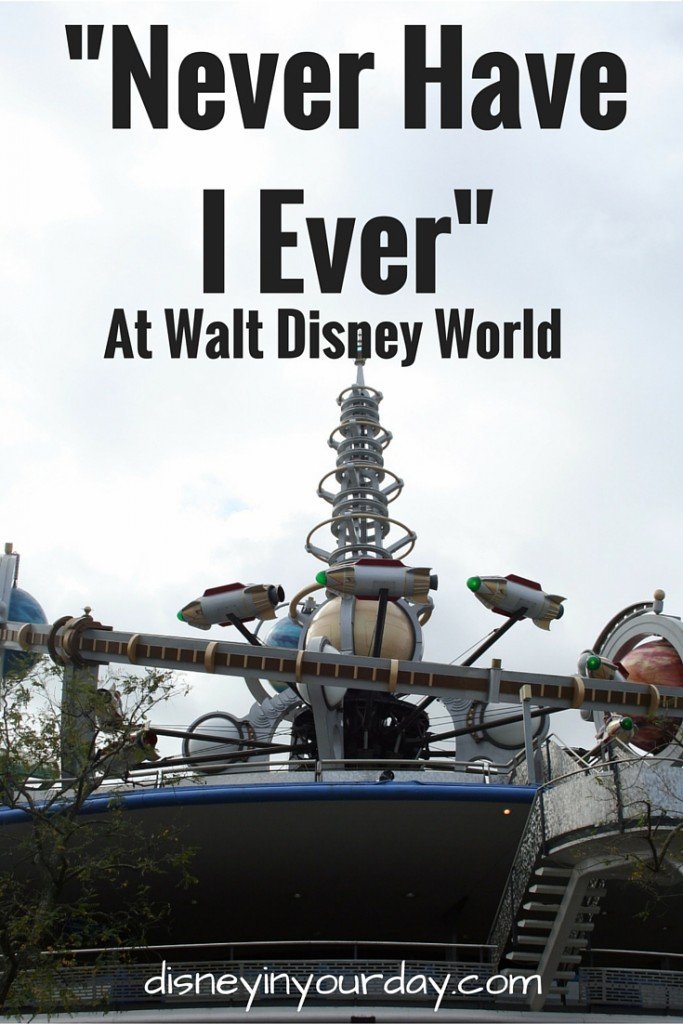 Believe it or not, there are things at Disney World that I’ve never done – and I’m not just talking about a certain restaurant I’ve never visited or a special event that only happens during a certain time of year (those things are on my bucket list!).  I’m talking about a regular attraction or ride in one of the four parks that’s included in your park admission.  Something that I’ve just never felt like or got around to doing in all of the times I’ve been at Disney.

I was inspired to write this post when Melissa from Mouse on the Mind posted her own “Never have I ever” list.  It really got me thinking about the topic and when I looked at a complete ride list I was surprised that there were so many I had missed.  I could think of one or two off the top of my head, but there were definitely more.  And if it wasn’t for my last trip this list would be even longer, as I tried a few rides for the first time just this past June!

Astro Orbiter
To be honest, this ride just never really appealed to me.  I’m not even sure where the line for it is.  I’ve never come across the line and never had a desire to go seek it out.  I might like to ride it sometime just so that I can experience it, but it’s not anything I’m racing to do.  If I’ve done all of the other rides I really enjoy and it doesn’t have much of a wait, I’ll try it.

Barnstormer
Back before it was the Great Goofini, I almost rode this when I was 8 years old.  Then while we were on line I chickened out and we got off line.  Later we saw that the ride had broken down with the roller coaster at the top, and I was glad I didn’t go on it!  The next time I returned to Disney after that first trip was when I was 16, and I’d outgrown the Barnstormer in favor of the mountains.  It’s another one that, like Astro Oribter, I’ll ride if it’s convenient and just to say that I’ve done it, but I’m not dying to try it.

It’s Tough to be a Bug
When I was 8 we went to see Honey We Shrunk the Audience, and it completely terrified me.  The feeling of mice running through your legs was just awful.  I’ve been leery of 3D shows ever since, and when I heard about this one and that it involved bugs, I knew it wasn’t something I wanted to try.  Friends have tried to convince me to go on it but I just don’t want to, and I don’t see myself doing it anytime soon!

most of Innoventions
Maybe I went in there and tried a few things on that first Disney trip.  But if I did, they didn’t make much of an impression on me because I don’t remember it.  Since then I think I’ve only stepped inside the Innoventions building one other time, and it was really just to walk through it.  I’ve heard there’s some cool stuff and I’d like to check it out, but no one I’m with ever seems to interested.  Someday!

Magic Carpets of Aladdin
This ride is just like Dumbo, but with magic carpets.  So if you’ve ridden Dumbo you’ve pretty much had the same experience.  Even though it’s really a kiddie ride, Dumbo is something I ride every once in awhile because it’s so iconic.  The magic carpets, not so much.

Share a Dream Come True Parade (MK)
I’ve never really watched the afternoon parade in the Magic Kingdom.  I’ve caught glimpses of it here and there, but I’ve never actually stopped to watch.  On my last trip I was planning to see it the afternoon I was in Magic Kingdom, but it was lightly raining so instead of the parade we got the “Rainy Day Character Cavalcade.”

Update: I wrote this post on my way down for a Disney trip.  One of the things I did was finally watch the parade in full!

Tricera Top Spin
This one basically falls under the same category as the Magic Carpets of Aladdin.  Same sort of ride, but with a dinosaur theme.  I have no real love for the Hester and Chester area, so I don’t usually even go into that section.  I’ve done Primeval Whirl once, but never this one.

The Legend of Captain Jack Sparrow
This is relatively new over at Hollywood Studios, and it’s nothing that particularly interests me.  I also haven’t heard great things about it so I’m not running over there any time soon.

And that’s it!  Other than that I’m pretty sure I’ve rode them all!  Even Tower of Terror, which I prefer not to ride because it makes my stomach feel funny, is something that I’ve at least experienced.

What rides or attractions have you never done at Walt Disney World?