You are here: Home / At Home / Moana Party 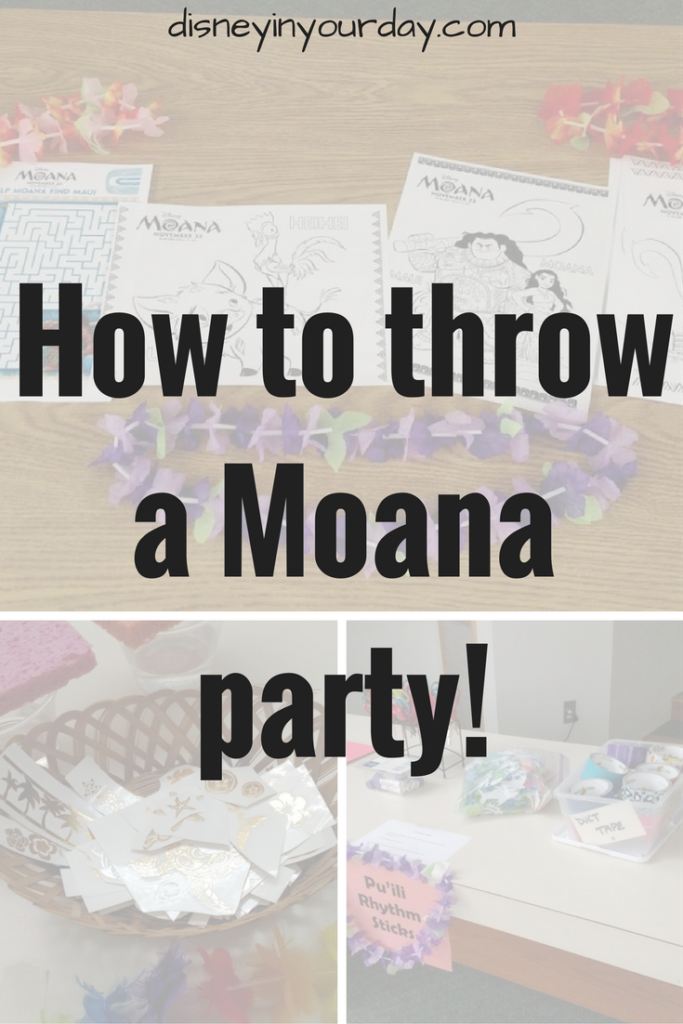 One of the coolest things I get to do in my new job of children’s librarian is plan programs and events for the kids.  Because we’re trying to tap into pop culture and whatever the kids are into to keep them interested in the library, it made sense to tie into the latest Disney movie.  And of course I had no problem planning an event for that! 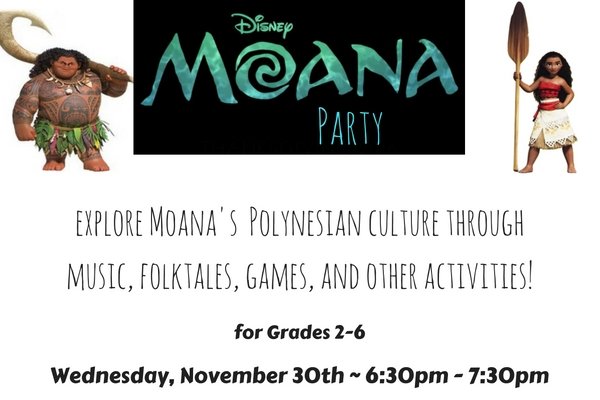 Our Moana party was a week after the film came out, so the most challenging part was coming up with activities and ideas before actually seeing the movie.  We decided to concentrate on it celebrating Polynesian culture (something the kids might not know much about) and geared it for grades 2-6.  We got a great turnout with 24 kids showing up that evening, despite the heavy rain we had outside!  I had different stations set up around the room with activities related to Moana or Polynesian culture.  Let’s take a look at the fun we had! 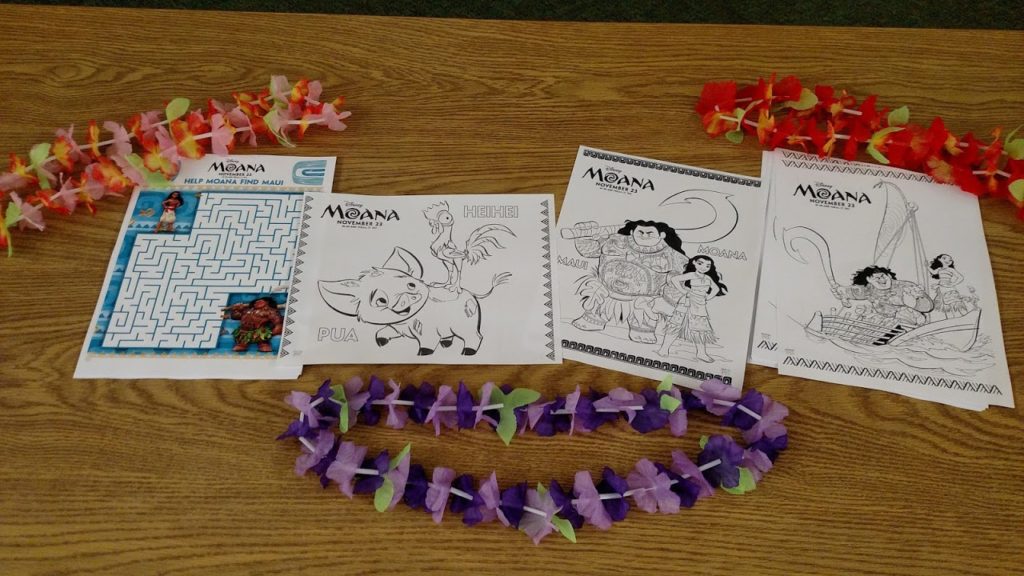 While kids were coming in and we were waiting for everyone to arrive I had a coloring station set up.  The cool thing about  coloring these days is that it isn’t seen as “babyish” anymore thanks to adult coloring, so everyone from grades 2-6 enjoyed it.  I had a maze too for kids that weren’t into coloring.  I found the coloring sheets here at This Fairy Tale Life. 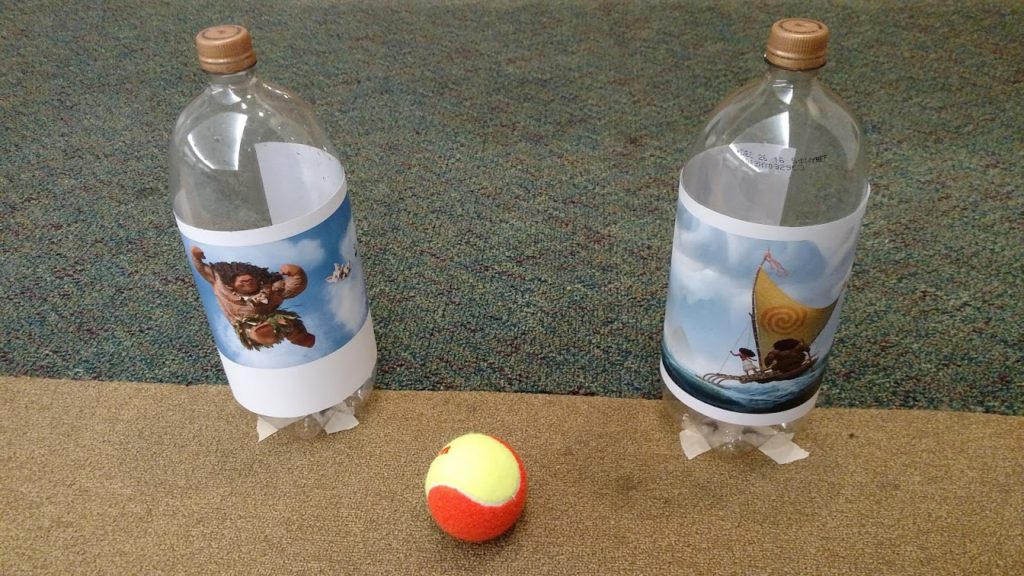 I found this Polynesian game and I always try to have at least one active game because kids love that (I myself might be a craft person but I know not everyone is).  The concept is pretty simple.  I told the kids it was like “reverse bowling.”  You have two poles that are traditionally 6 inches apart.  You have to try and roll a ball through the sticks without actually touching them, and each time you  successfully do that you get a point.  For our version we used 2-liter soda bottles and a tennis ball.  I also had them a little further apart than 6 inches because it was too challenging for the kids. 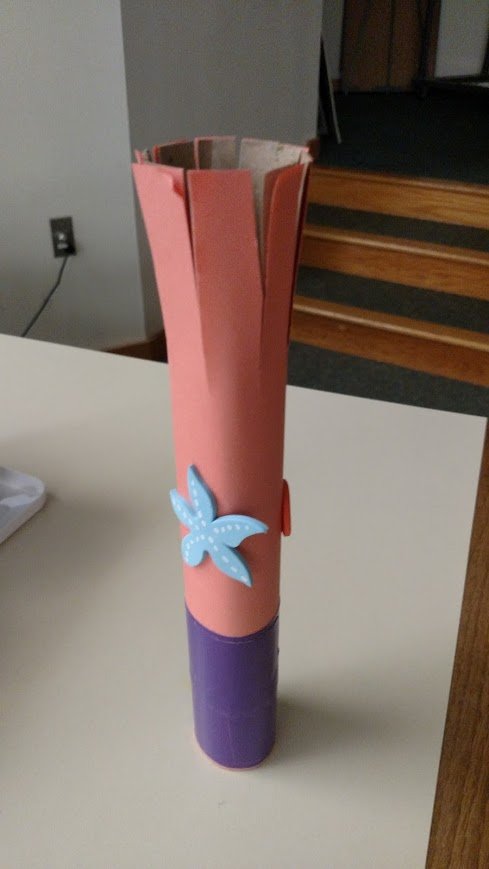 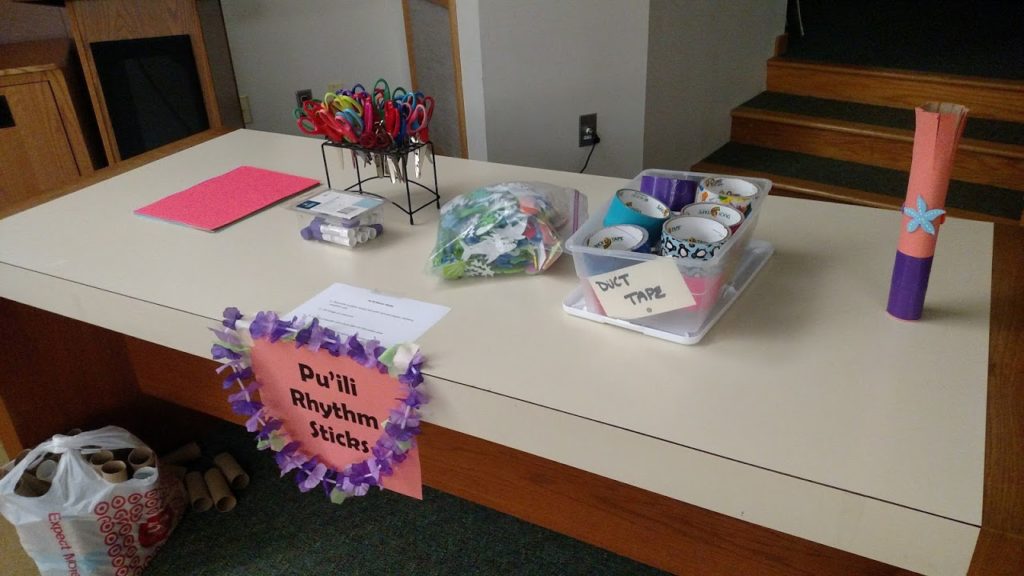 To incorporate both a craft and music I had the kids make Pu’ili rhythm sticks.  These are used in traditional Polynesian dance.  These were made out of paper towel rolls.  They could decorate them however they wanted with colored paper, stickers, duct tape, and foam shapes.  Then they cut “fringe” into one end of the tube.  I also had the Moana soundtrack playing at this station. 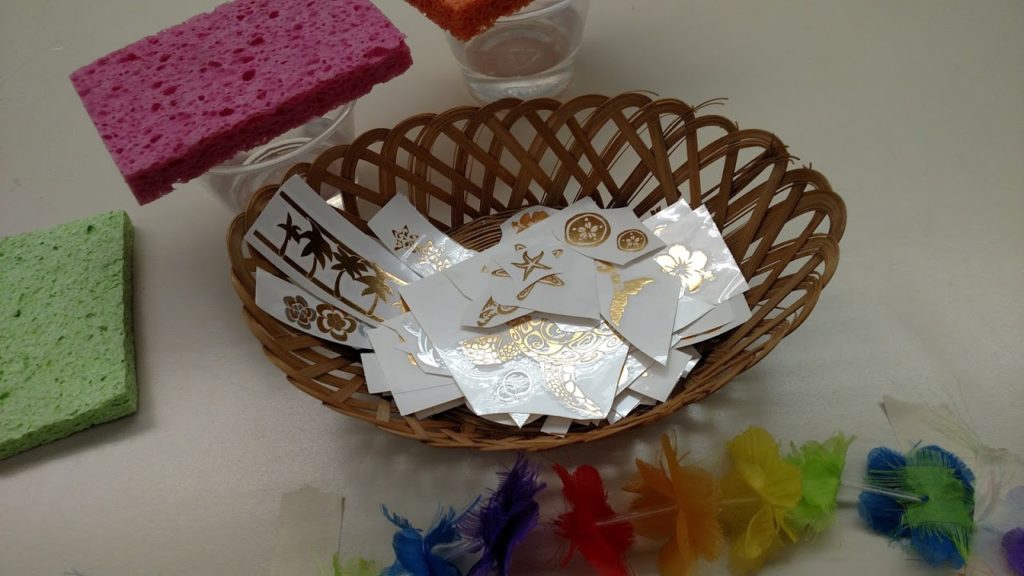 I got some temporary tattoos from Amazon to give to the kids.  One of our high school workers was on that table and helped to apply the tattoos for the kids.  The ones I bought from Amazon were Hawaiian style with Polyensian flowers, turtles, dolphins, and stuff like that.  They had a lot of fun with the tattoos and they were really pretty. 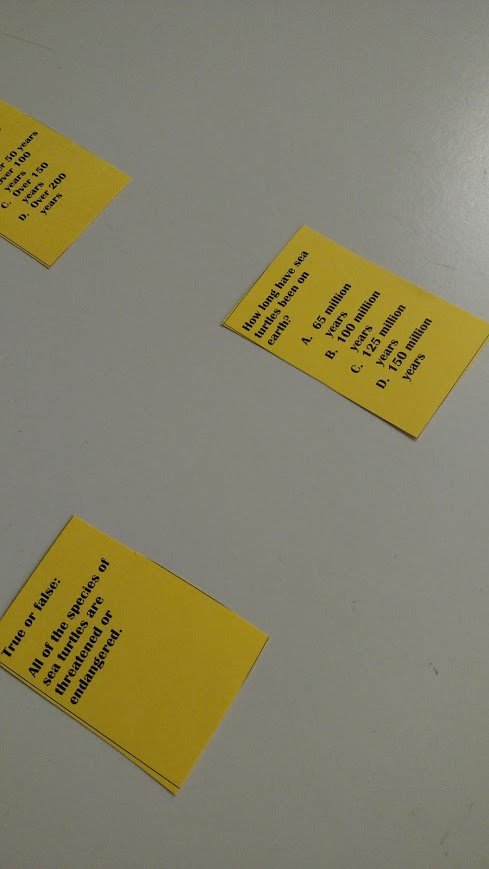 To add a little bit of a learning element I made sea turtle trivia.  A lot of Moana was about the sea, so I thought it might work.  All the questions were multiple choice or true/false.  They actually got really into this, everyone cheering when they got a question right! 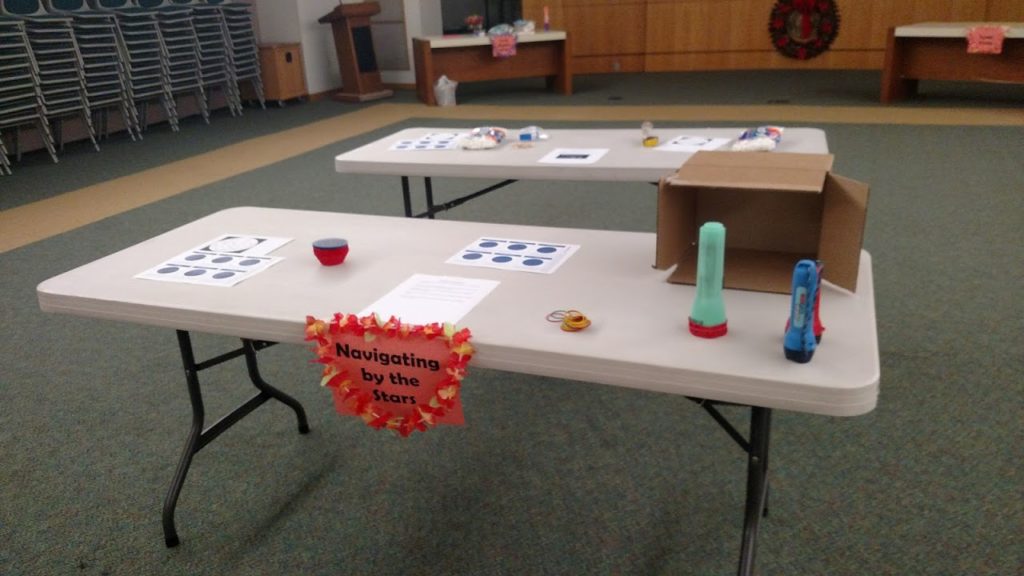 To tie into Moana’s efforts to learn how to sail and navigate by the stars, we had two constellation activities.  The first was to draw a constellation on a cupcake wrapper and then poke the “stars” out with a toothpick.  You then put the wrapper over a flashlight with a rubber band and shine it into a dark area to see your constellation.  The other activity was to create your own constellation with mini marshmallows and toothpicks.  Not surprisingly they loved that one!  Especially when they got to eat their creations afterward. 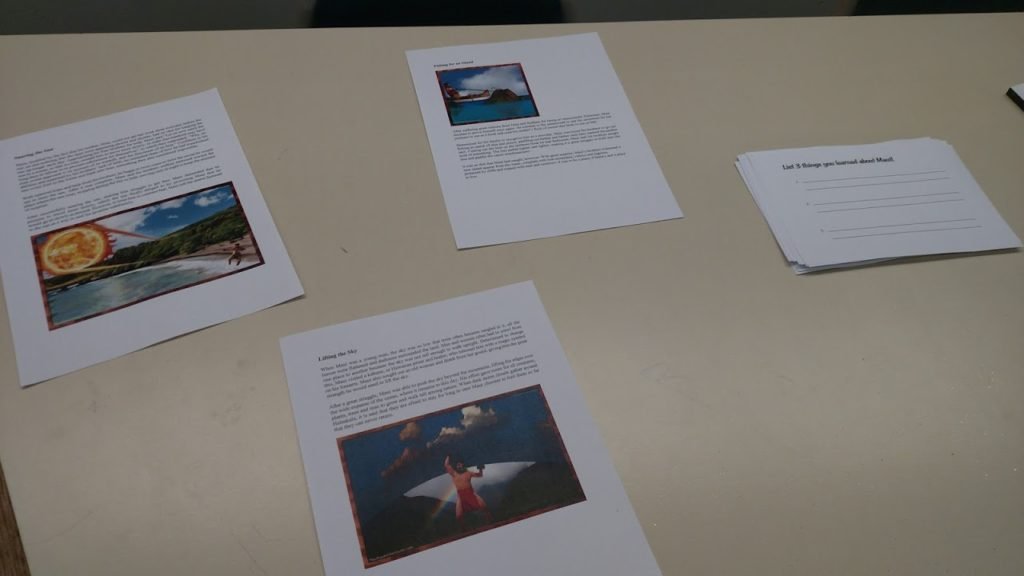 To learn a little bit more about Maui I put out printed stories and a book with his myths.  They are actually very interesting and I know it’s something that most people don’t know much about!  And if you’ve seen Moana you can see how many of the myths are referenced in the movie.

We finished the evening with some snacks!  You could really go crazy with this (there are lots of fun Polynesian desserts and snack recipes you could make) but we chose to keep it simple.  We served fresh pineapple, goldfish crackers, and Hawaiian punch.  Easy and it still goes with the theme!

Do you have kids who are really into Moana?  Which of these activities do you think they’d like the most?