You are here: Home / Animal Kingdom / Dine with an Animal Specialist

One of biggest hidden gems at Disney is the chance to dine with an Animal Specialist at Disney’s Animal Kingdom Lodge.  I say a hidden gem because Disney doesn’t seem to advertise it at all – I didn’t know about it for the longest time, and so many people I know who are big Disney fans had no idea about it either until I told them!  But this is a really cool experience that I definitely recommend checking out if you’re into animals.  It’s similar to the Dine with an Imagineer experience at Hollywood Studios (though this one is cheaper!).

Apparently so few people know about it that it turned out I was the only one signed up the day that I did it!  So it turned into a private lunch for myself and the animal specialist that day, whose name was Emilie.  The lunch is held at Sanaa restaurant and lasts for about two hours.  I arrived and was seated with Emilie.  It was intimate and at first I was nervous about being the only one there.  I’d thought of one or two questions I might like to ask her, but I wasn’t prepared for a whole 2 hours of one on one time!  Luckily we got along quite well and ended up chatting about a lot of things, not just her animal job.  She grew up in France and told me a bit about Disneyland Paris too, since I’m traveling there in September.  By the end of the meal I felt like she wasn’t just a cast member who had to be there but my friend. 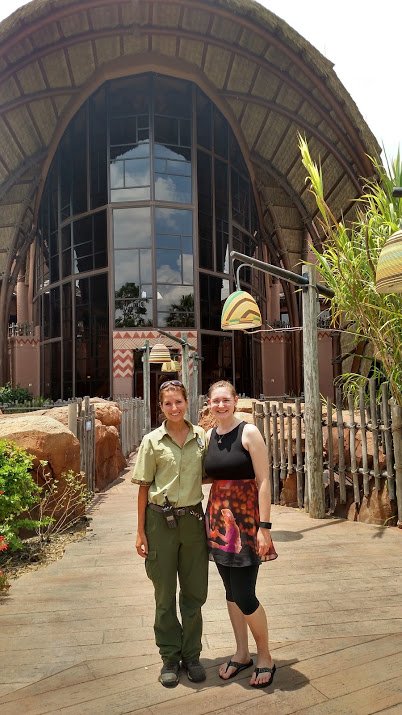 Emilie works at Animal Kingdom Lodge and does many things with the animals, but one that she was most excited to tell me about was her work with the vultures.  She was very interested in the psychological aspect of animals, which I thought was fascinating.  Her passion really showed when she was talking about the vultures.  I had no idea about some of the issues she shared with me.  Apparently in Africa an other areas some of the livestock will be injected with medications or other substances that are poisonous to vultures.  So when vultures feed on the carcasses, they die.  People have been opening “vulture restaurants” as a place to put out healthy, non-poisoned carcasses for the vultures to eat.  So fascinating!

Another interesting story: I asked Emilie if the animals ever do anything unusual or unxpected.  She told me about how they have a female red river hog.  The female is not actually capable of reproducing, but she still likes to “stand” for everything (that’s the term she used – I’m guessing it’s like a mating pose?).  She will stand for other animals or even inanimate objects.  Once she posed for a teenager giraffe who attempted to take advantage of that and mount her – you can only imagine what kind of sight that would have been to see!

We also talked a lot about some of the basics of what you might want to know, such as her educational background, how she came to work for Disney, what she does on a daily basis, etc.  During the meal we were also greeted by one of the chefs of the restaurant who talked about the food we were being served and how it was prepared, as well as a cultural representative from Zimbabwe who told us a bit about her country. 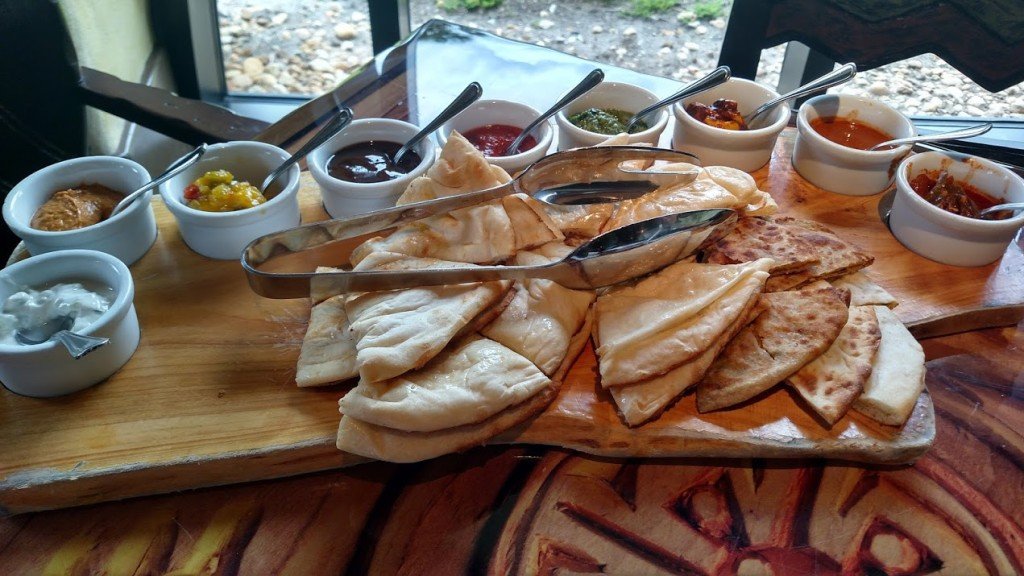 Sanaa is one of my favorite restaurants on property, so of course the food was amazing.  A 4 course meal was included, though the courses were pre-determined – they didn’t give me options on anything (which was fine because I loved all of the food I got!).  Emilie didn’t eat much.  She said she’s usually with bigger groups where she’s doing a lot of talking and doesn’t have time to eat, so she has a snack beforehand.  The meal started with the full Sanaa bread service.  Emilie had a bit but there was a ton of food for just me!  Then came a salad sampler course (I liked the watermelon salad best).  The entree was two dishes, the butter chicken and goan seafood curry.  Both were great.  And then dessert was an appetizer sampler, all of which was delicious.  It was an incredible meal! 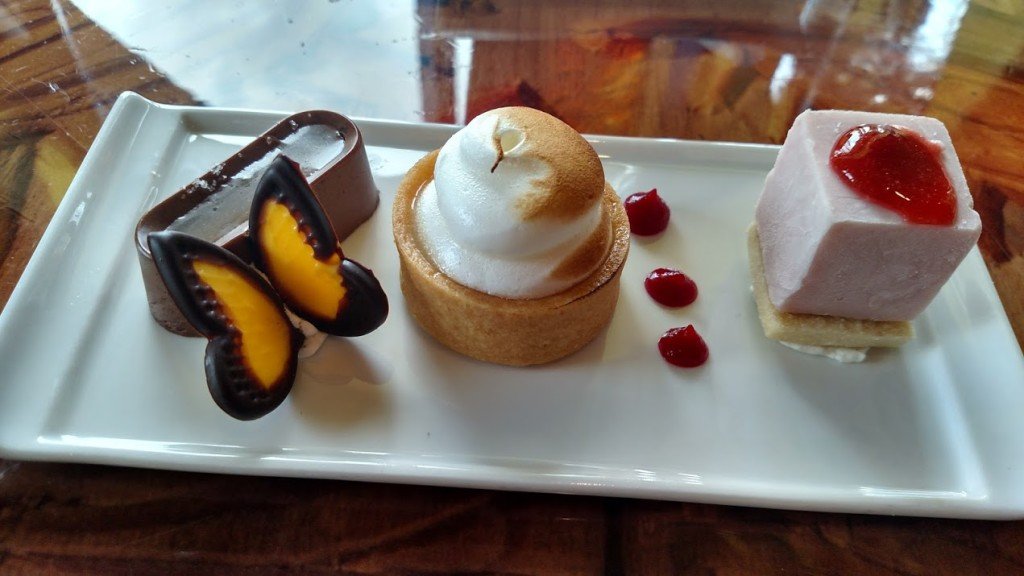 There’s one more little treat after you finish your meal.  You get to go outside and interact with one of the animals – in this case, a tortoise named Schmidt.  I got to go into a section marked “for cast members only.”  We tried to feed Schmidt but he was being a bit of a rebel that day.  He just wanted to walk along and do his own thing!  I did get to pet him though.  Apparently tortoises like it when you scratch the back of their shell, just like a cat or dog!  I didn’t even realize they could feel it through the shell. 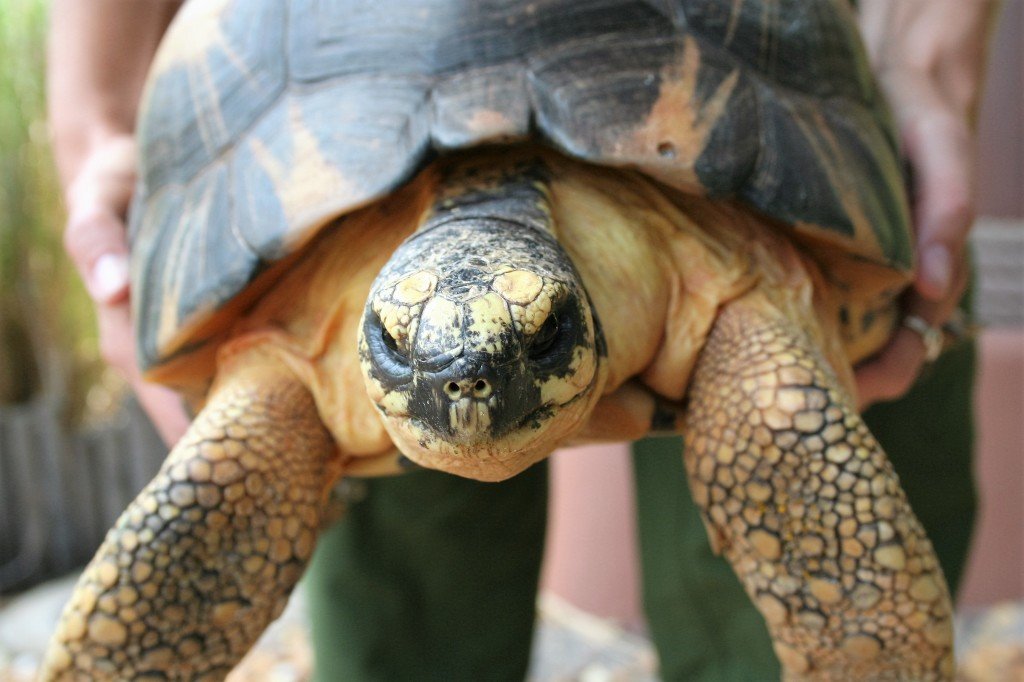 All in all I thought this was a really great experience – and given how much Disney likes to overcharge for things, I thought it was really reasonable.  The price was $49 per person, which included a 4 course meal and the personal interaction with the animal specialist.  It’s also probably something I would do again, since you could meet with a different specialist and learn totally different things!  I think it would be great for kids who are into animals too.  You have to call to book it, but you can learn more about the experience here at Disney’s website.

Does this sound like an extra experience you or your family would be interested in doing?  What questions would you ask the animal specialist?