You are here: Home / Disney Cruise Line / Lumiere’s on the Disney Magic 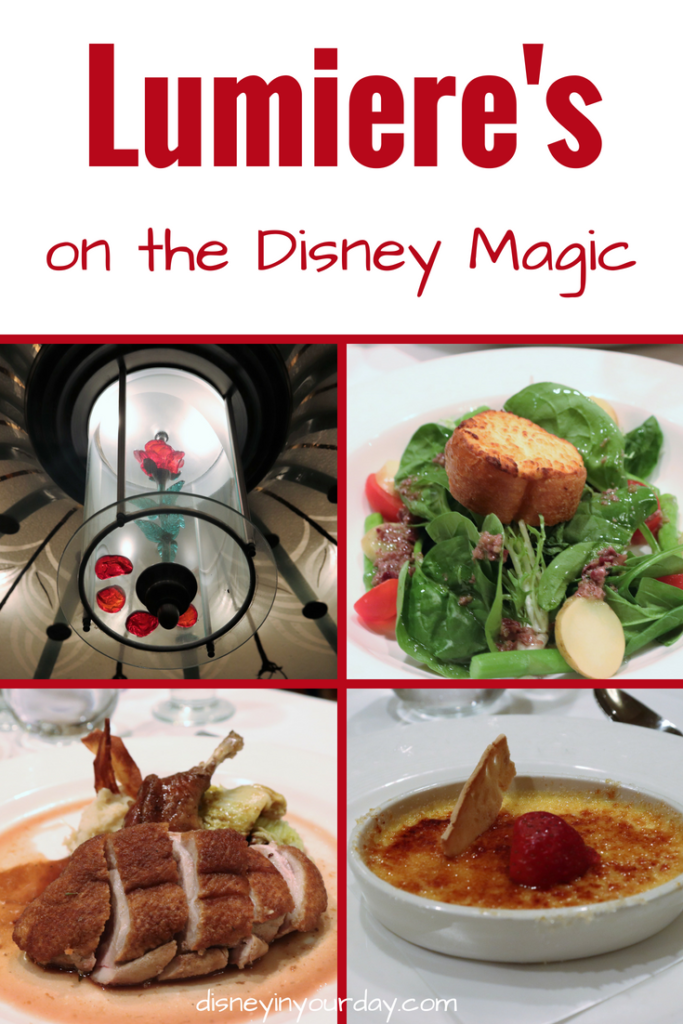 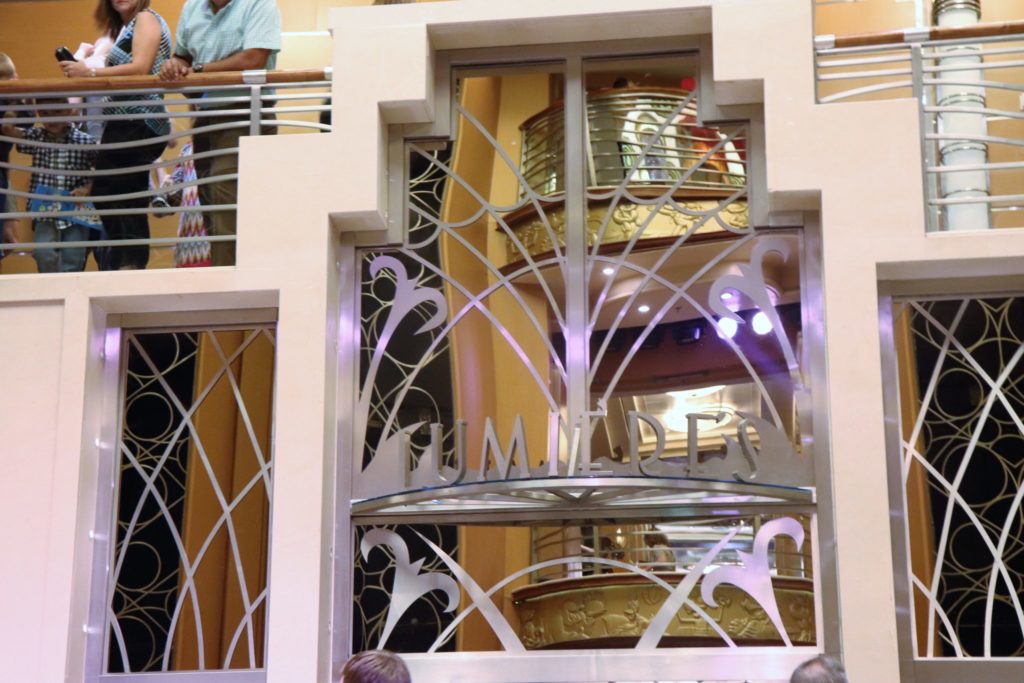 As soon as I walked in I was pretty much in love with the decor of the restaurant. It’s not like Be Our Guest in Disney World where it’s modeled after that ballroom itself, but it’s elegant and has lots of Beauty and the Beast touches.  The back wall of the restaurant has a mural of the ballroom with Belle and the Beast dancing. 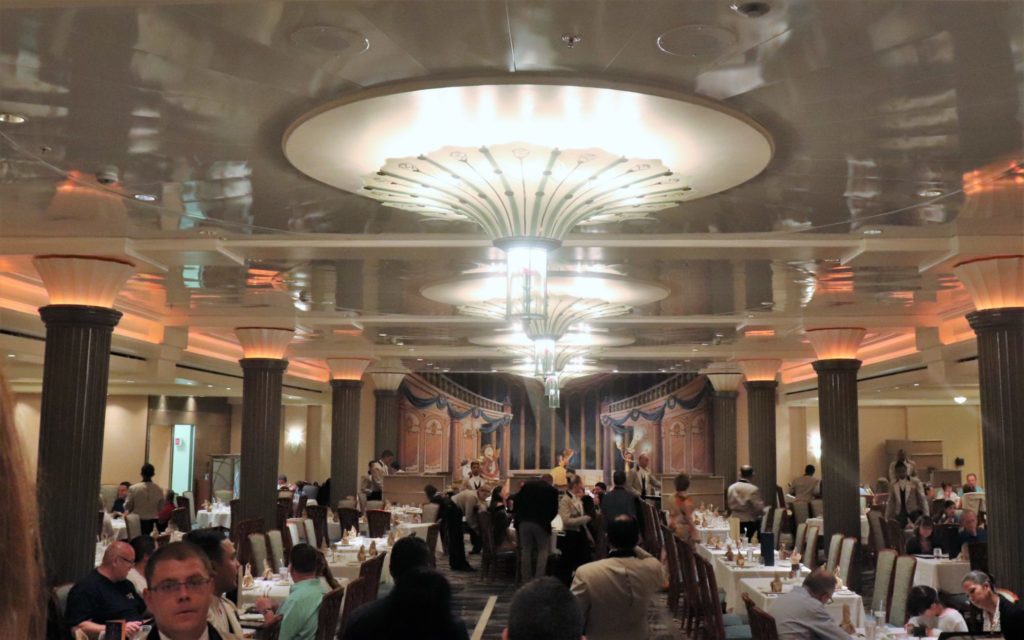 My favorite part, though, was definitely the chandeliers/light fixtures. They were glass and held a rose inside. They were stunning and I totally want one for my own house to hang in my dining room. 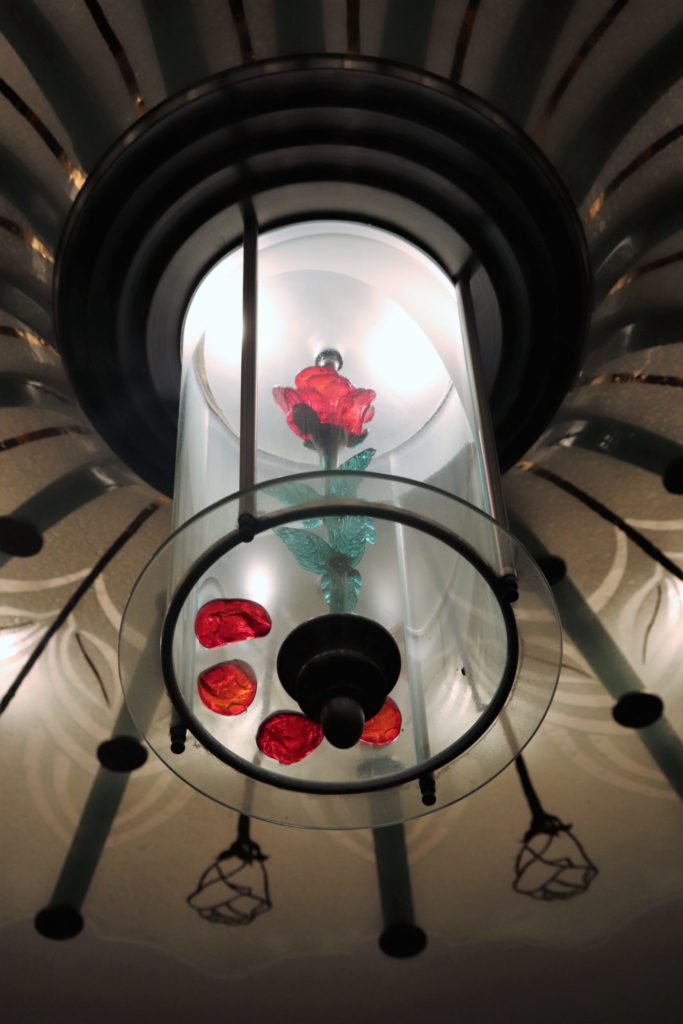 But of course this is really about the food!  First up was drinks. The restaurants each have a handful of specialty drinks specific to that restaurant, as well as the usual drink menu.  All four of us ordered the Doubled Crowned (Crown Royal, Chambord, Cointreau, Cranberry juice, fresh lime juice). We had tried it and learned about it during our mixology class and it made a very good impression on all of us!  The bread here was a tasty french bread served with olive spread. 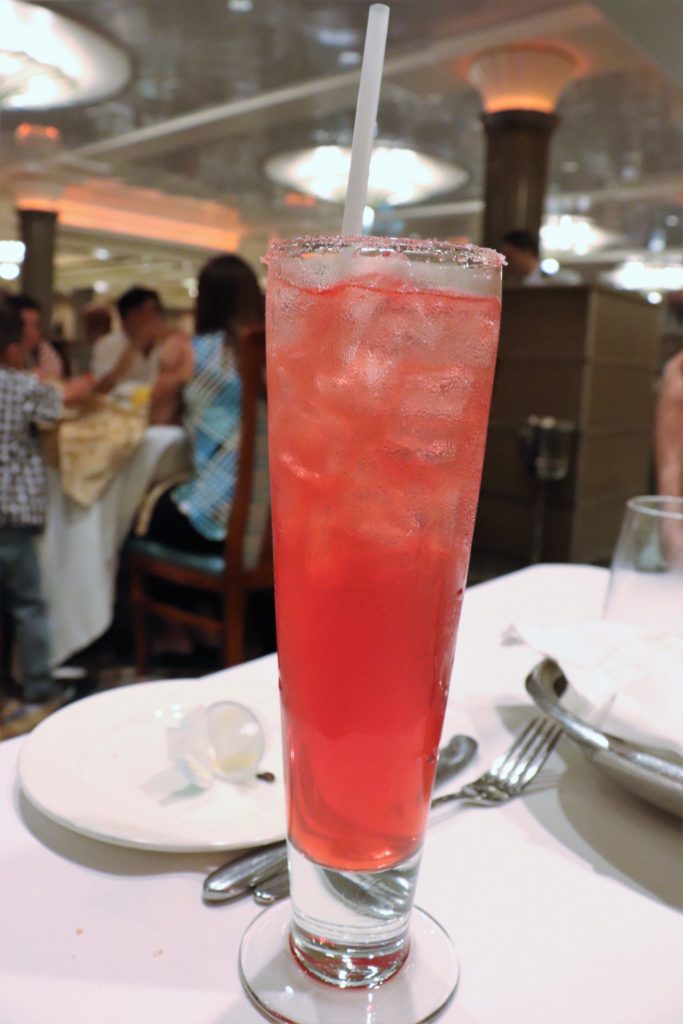 On the cruise ships your meals at the main restaurants are included, which means you can basically order whatever and as much as you want!  I don’t normally have 4 course meals, but here we had an appetizer, soup or salad, entree, and dessert every night!

For his appetizer Jason went with the iced lobster and jumbo shrimp (with green asparagus, horseradish cream and a dill dressing): 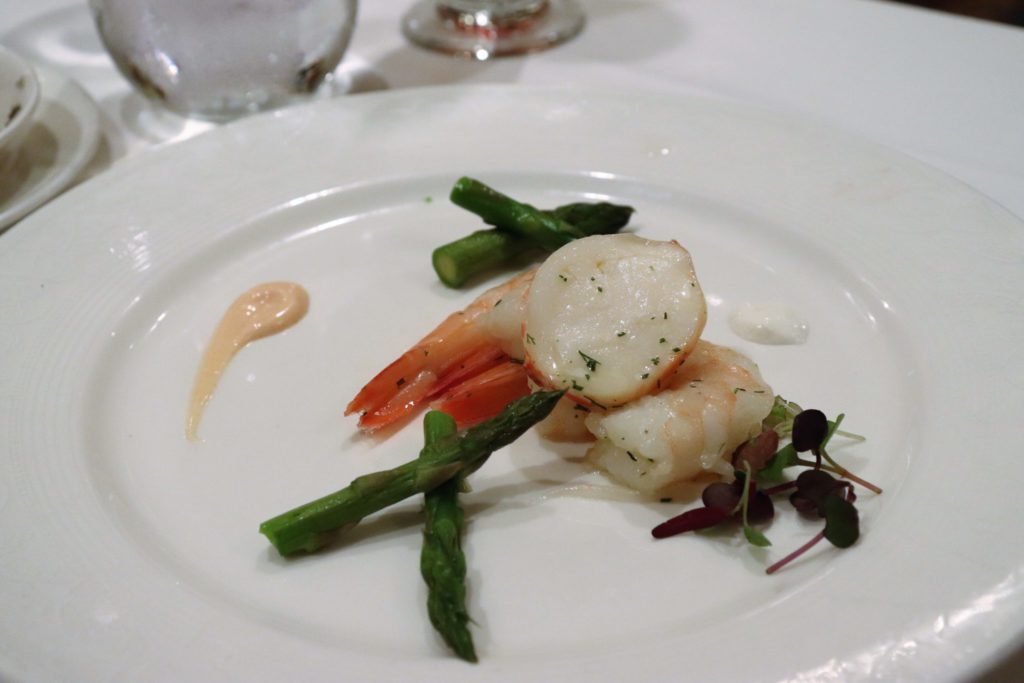 I think this is what our friend Cassidy got as well, since I only have a picture of two appetizers 😉  You can’t really go wrong with fresh lobster and shrimp, and this appetizer was great and the perfect light start to the meal.

I wanted to be a bit more adventurous and went with Gaston’s Escargot Gratinee (herb-marinated snails with finely chopped mushrooms topped with garlic butter): 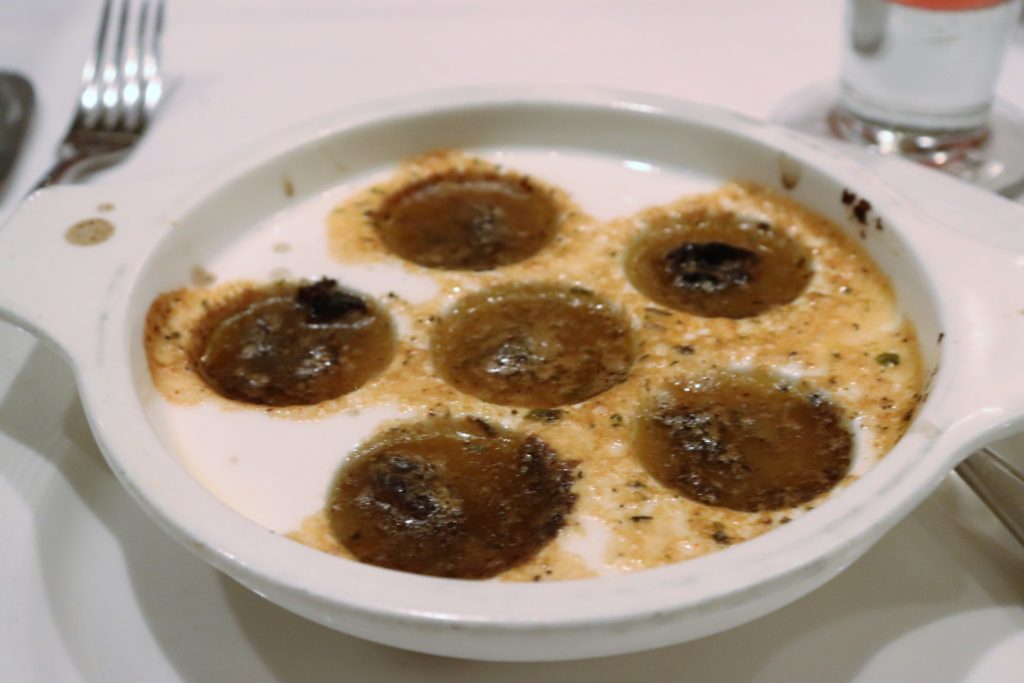 I know some people think snails are gross, but every time you order them in a restaurant like this they are drenched in garlic and butter and all that good stuff and taste pretty awesome. I actually don’t mind the texture either – I think clams and mussels are more slimy and gross than snail. The only part I didn’t love about this dish was the added chopped mushrooms, because I’m not a mushroom fan. I worked around them though!

For a soup our friend got the Potage Parmentier (Leek and potato soup): 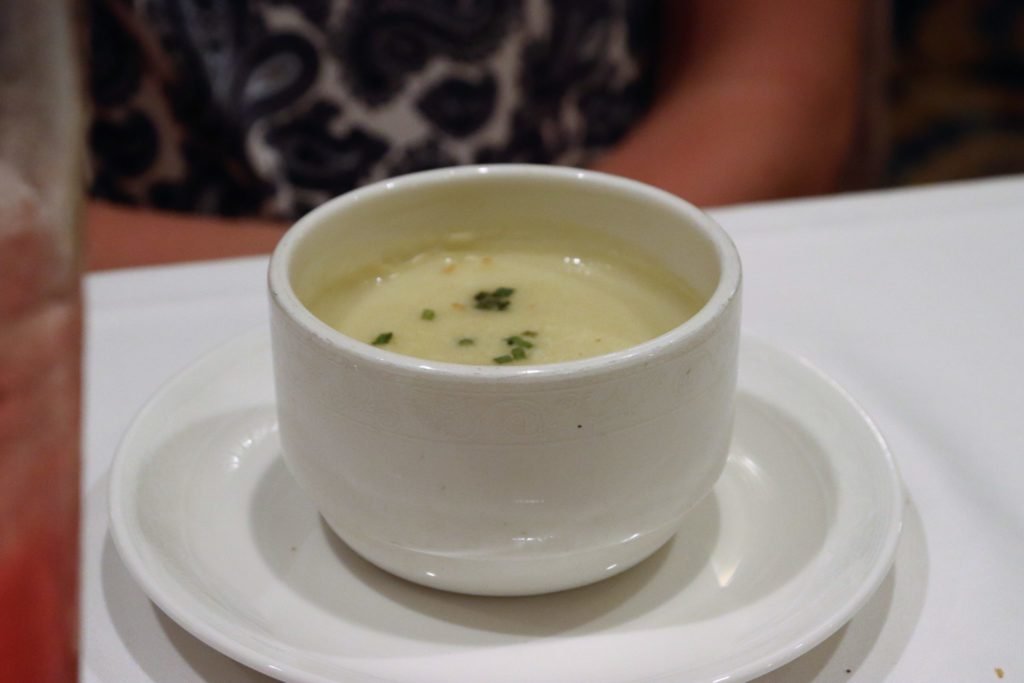 I think she said it tasted pretty much like a typical leek and potato soup. Good, but nothing special.

I went with the Farmhouse salad (baby spinach, asparagus, cherry tomatoes, and fingerling potatoes served with a goal cheese crostini and an olive vinaigrette): 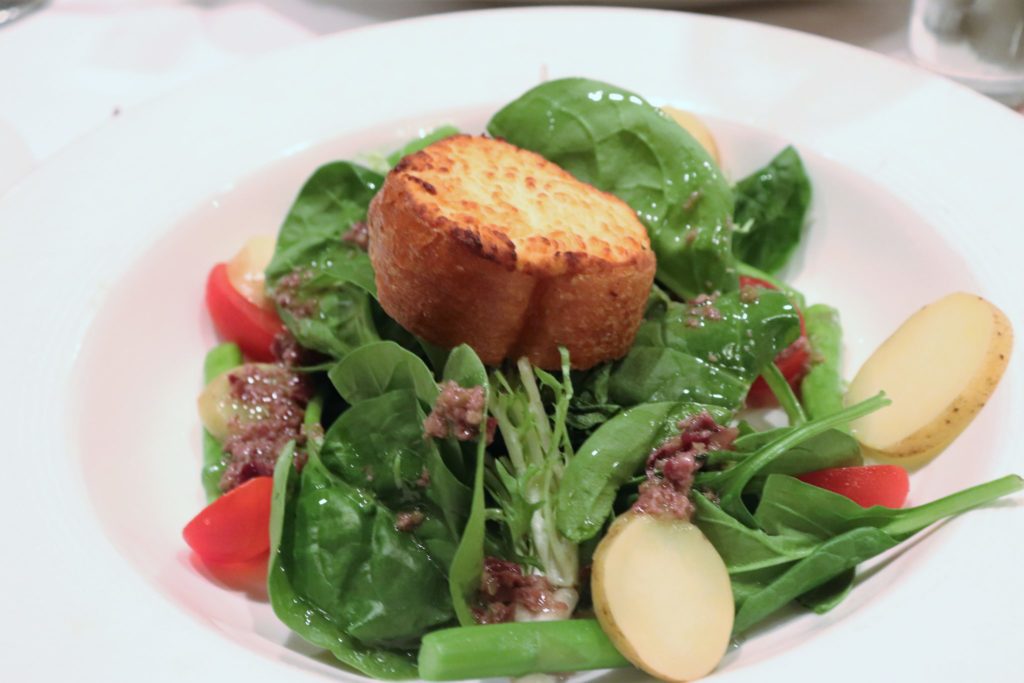 I wasn’t sure how this would be but I ended up really enjoying it.  I’m not used to having asparagus or potatoes in a salad but everything worked really well together. The highlight was definitely that goat cheese crostini on top though – so full of flavor!  Jason opted not to get a soup or salad as nothing really appealed to him.

He was ready for his entree though, which was the Crispy roasted duck breast (with cabbage, shallots, honey parsnip mash and a duck red wine jus): 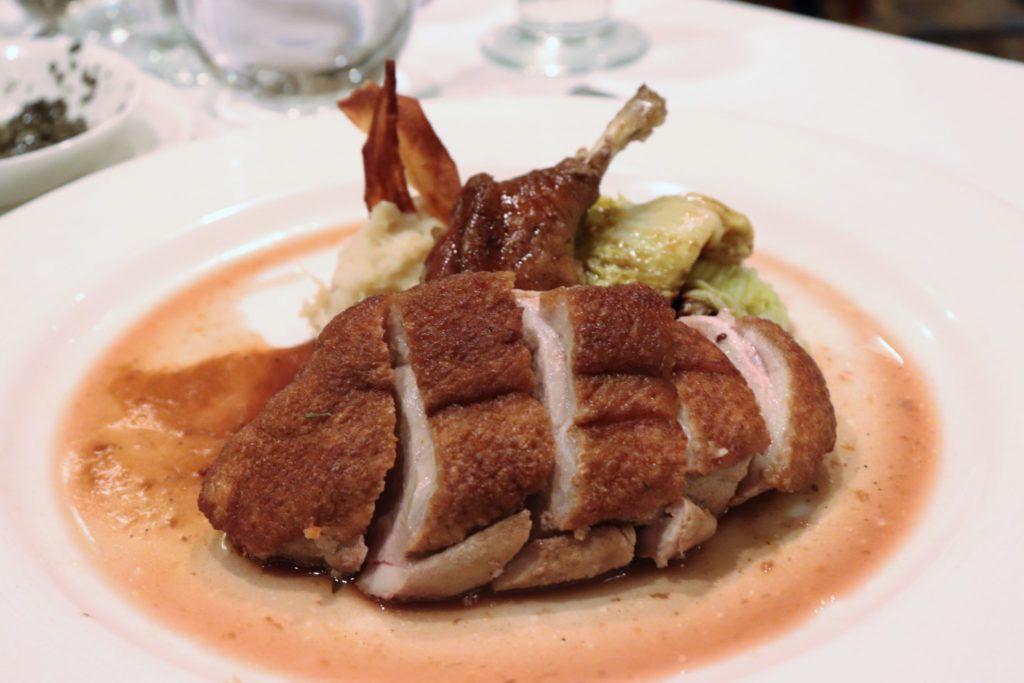 His comment was “it was not as impressive as I thought it would be.” It was still good, but nothing that blew him away. 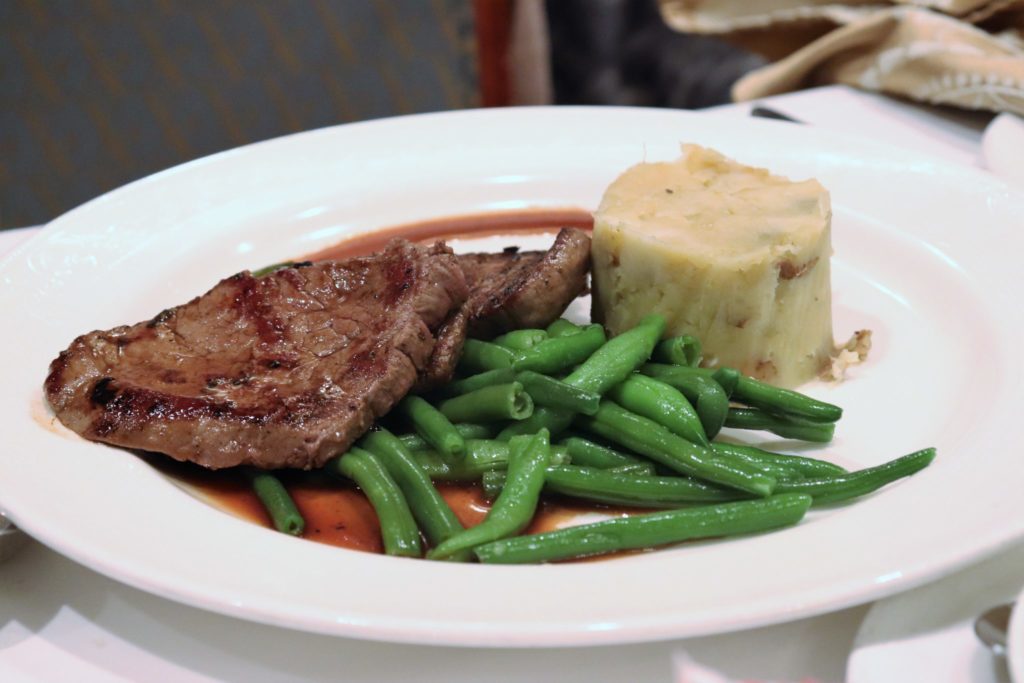 And I went with the Conchiglie Pasta (with buttered lobster, tossed in a tomato shrimp tarragon brandy sauce with lemon basil): 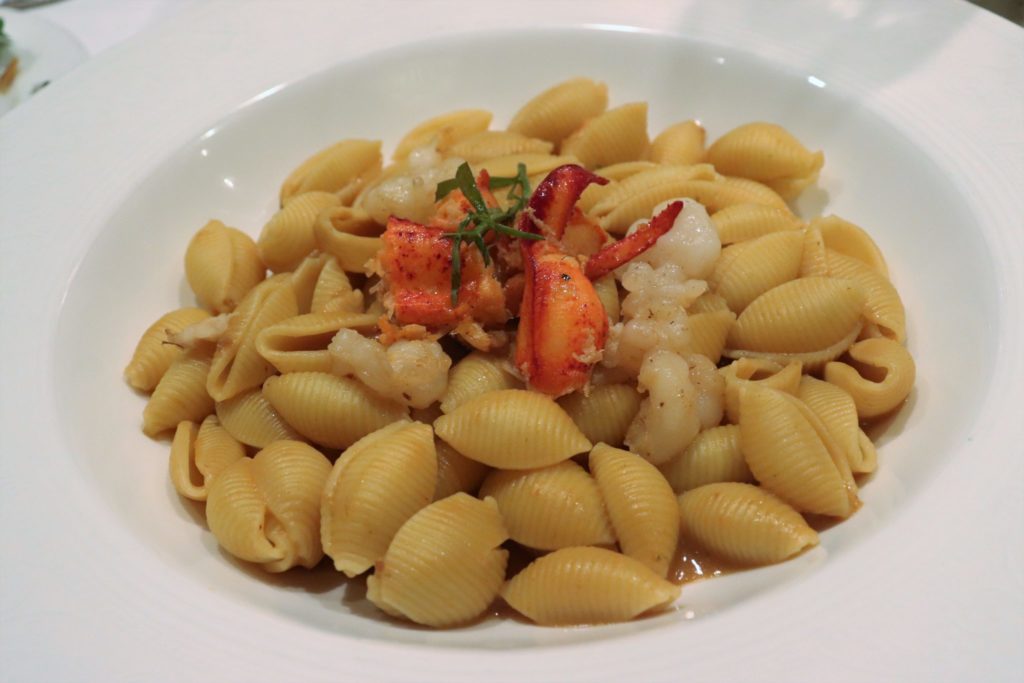 It’s probably not a good sign when you order an entree and the waiter says “are you sure you want that?” and then tells you that a lot of people send it back and he’ll be happy to have a second entree ready for me.  I decided to take a chance on it anyway. And honestly, I thought it was fine but nothing great. The sauce is definitely odd – it’s heavy on the tarragon, which is not a flavor that is appealing to everyone. I think they could do this with a much more appealing sauce. It wasn’t enough to make me not eat a plate of pasta and lobster, but I wasn’t really impressed.

But on to dessert!  Cassidy went with the apple tart tatin (carmelized baked apple served with vanilla ice cream): 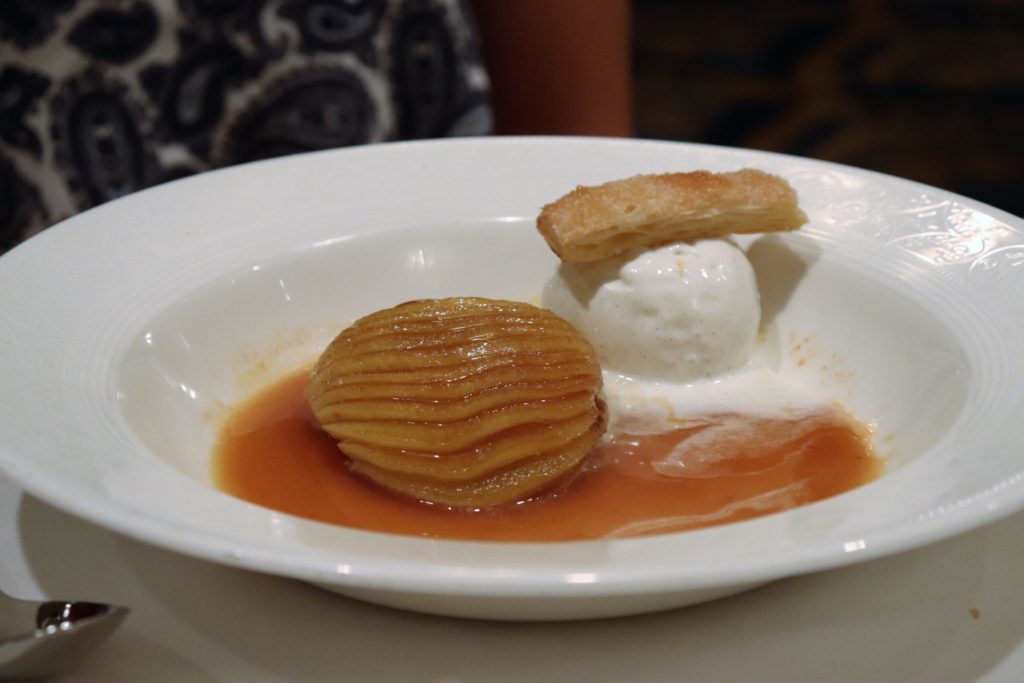 This looked delicious and it tasted that way too.

Jason is a lover of creme brulee so his choice was the Tahitian Vanilla Creme Brulee (with Almond Biscotti): 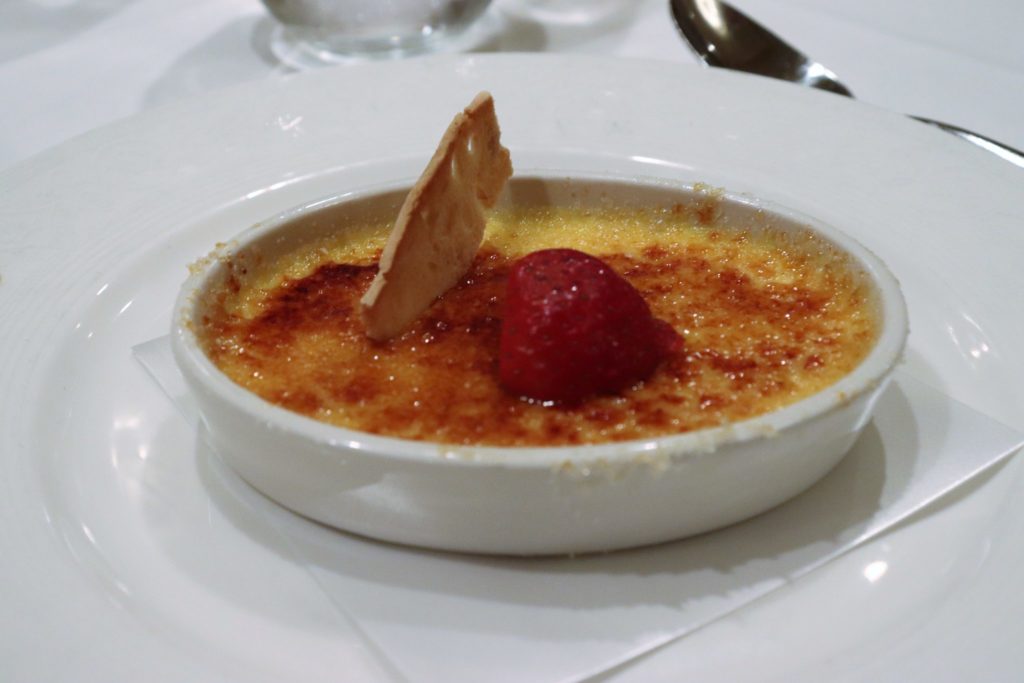 As a connoisseur of creme brulee, he said “this one was good.” How well they crisp it on the top is very important (it has to be enough that it’s crispy, but not burnt) and this one got it right. 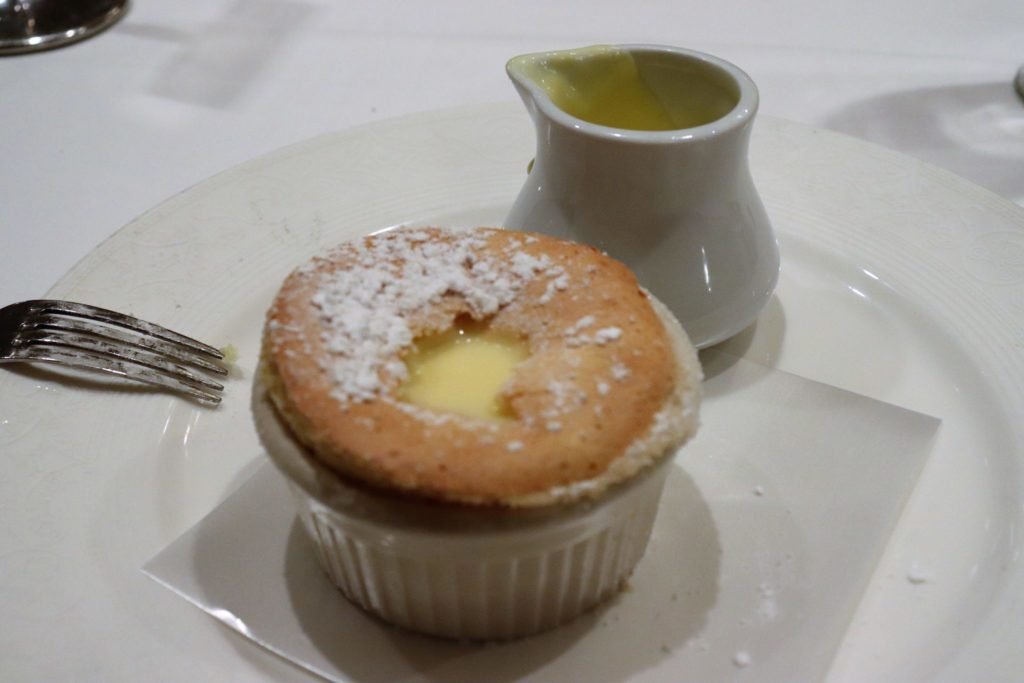 This is the best dessert I had on the cruise and one of my favorite desserts I’ve had anywhere ever.  If you’re a fan of Grand Marnier I think you’ll love it. I can’t recommend it enough.

Normally on the cruise we had great service. Your servers rotate with you, so you have the same ones every night. Thatree, our head waiter, was wonderful and friendly.  However, I will say that the night we dined in Lumiere’s, service was SLOW. Dinner took almost an hour longer there than it did at any of the other restaurants. Our assistant waiter was sick that night and we had someone else filling in, so it’s possible that contributed, but we watched other tables with other servers get their desserts because we’d even had our appetizers, so that was a bit frustrating.

Other than that though, Lumiere’s was a pretty lovely experience!  It was beautiful inside and the amazing dessert made up for the mediocre entree.  A good addition to the dining rotation.

What would you order at Lumiere’s on the Disney Magic?