I’m so bummed that this is the last month of the Kill, Refurb, Marry blog hop!  I haven’t participated every month, but it’s been close.  I always find it interesting to answer the questions and see what others have to say. If you’re not familiar here’s how the blog hop works:

You are probably familiar with the popular parlor game, Kill Boff Marry, where given the choice between three people, you must decide which you’d murder, sleep with and spend the rest of your life with.  Well, Melissa Sue from Mouse on the Mind transformed the  game into a WDW-themed version called Kill Refurb Marry.  She then added a little Blog Hop action so everyone can play along!

This month’s topic is MyMagic+, the new technology system Disney has implemented and involves their app, fastpasses, dining reservations, and much more.

I’ve made it clear before that I’m not a fan of FastPass+.  The reasons are outlined in that post linked, but to reiterate – the standby lines are longer, there are lots of limitations to how many faspasses I can get and which ones, and I have to plan out everything I want to do and at what time before I even leave home.  I like the idea of being able to get a fastpass from a centralized kiosk or your phone instead of the machines, but I’d rather do it that day the way they used to be.  The whole fastpass+ system is not my friend. 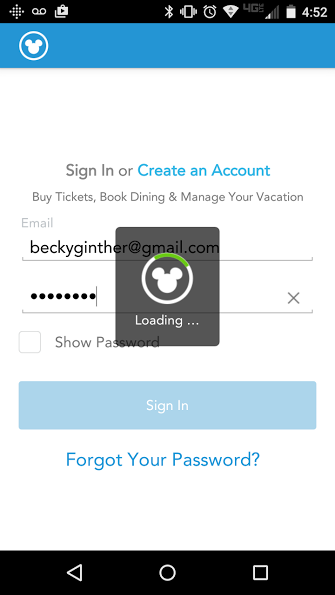 I tried to open to app to get a screenshot for this post, but it wouldn’t ever load. So I guess that kind of speaks for itself.

This is the app/web site experience that is supposed to keep everything organized and in one place.  Theoretically it should keep track of all your reservations and plans.  You can even book fastpasses and dining reservations from it.  In concept it’s a great idea.  The issue for me is that I have a lot of problems with it.  The app often doesn’t load when I’m in the parks, or it requires me to sign in every time I open it.  Sometimes my plans just don’t show up even when I know I have things booked.  If they can get it to work consistently I think it would be great.

I’m a big fan of the magic bands.  It’s so convenient to have everything all in one place – my park ticket, hotel room key, my fastpasses, even my credit card!  And right on my wrist, so I don’t even have to fuss around in my purse to find things.  Now if only they could get the annual pass discount card onto the magic band I would be very happy.  Plus they come in fun colors you can decorate yourself, or you can buy one of the cool ones that Disney sells.

What do you think of MyMagic+?  Will you miss the Kill, Refurb, Marry posts?

Check out what others are saying on the topic here!