You are here: Home / Disney World / Has the bus transportation at Disney resorts gone downhill? 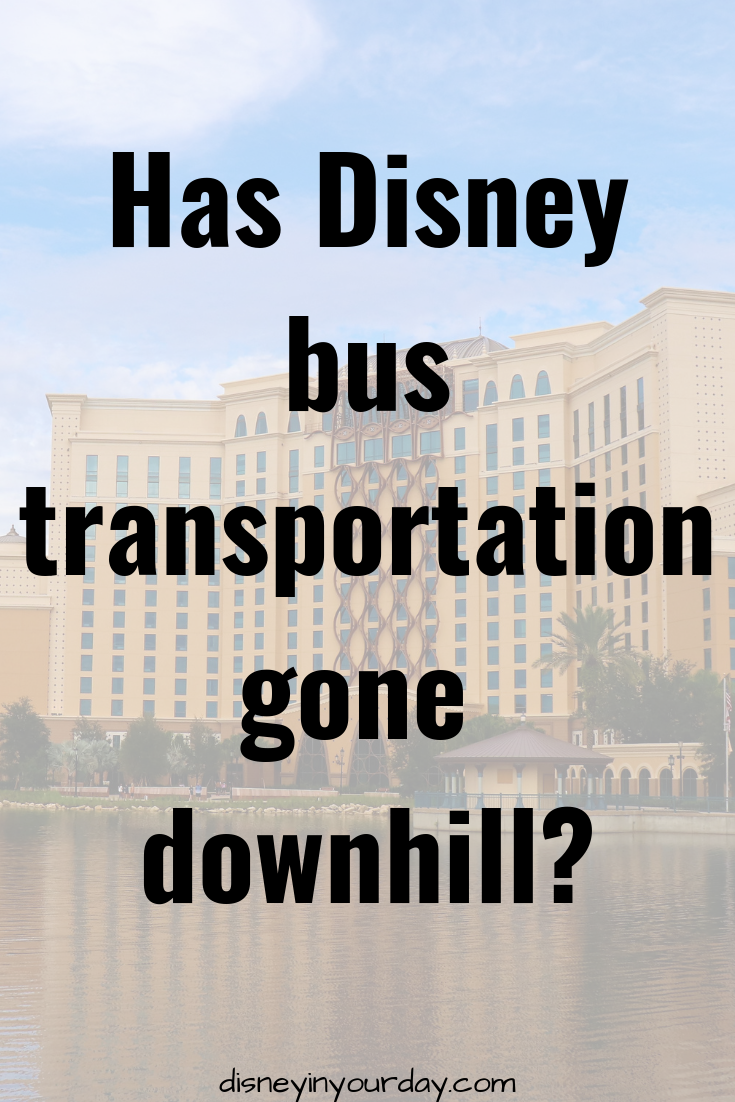 During my most recent stay at Disney World I was at Coronado Springs. I have now stayed at Disney about 30 times, and I have never in memory had such poor bus service as I did on this trip. I don’t know if this is a fluke or not, but I do think it’s worth talking about. I shared something on my facebook page and many people chimed in about similar problems.

Though people have also offered suggestions or alternatives, I really think that Disney needs to get this problem under control. They advertise their transportation to and from the parks as a perk. We pay premium prices to stay at their resorts. I shouldn’t have to also pay for a lyft just because Disney isn’t living up to what they promised. 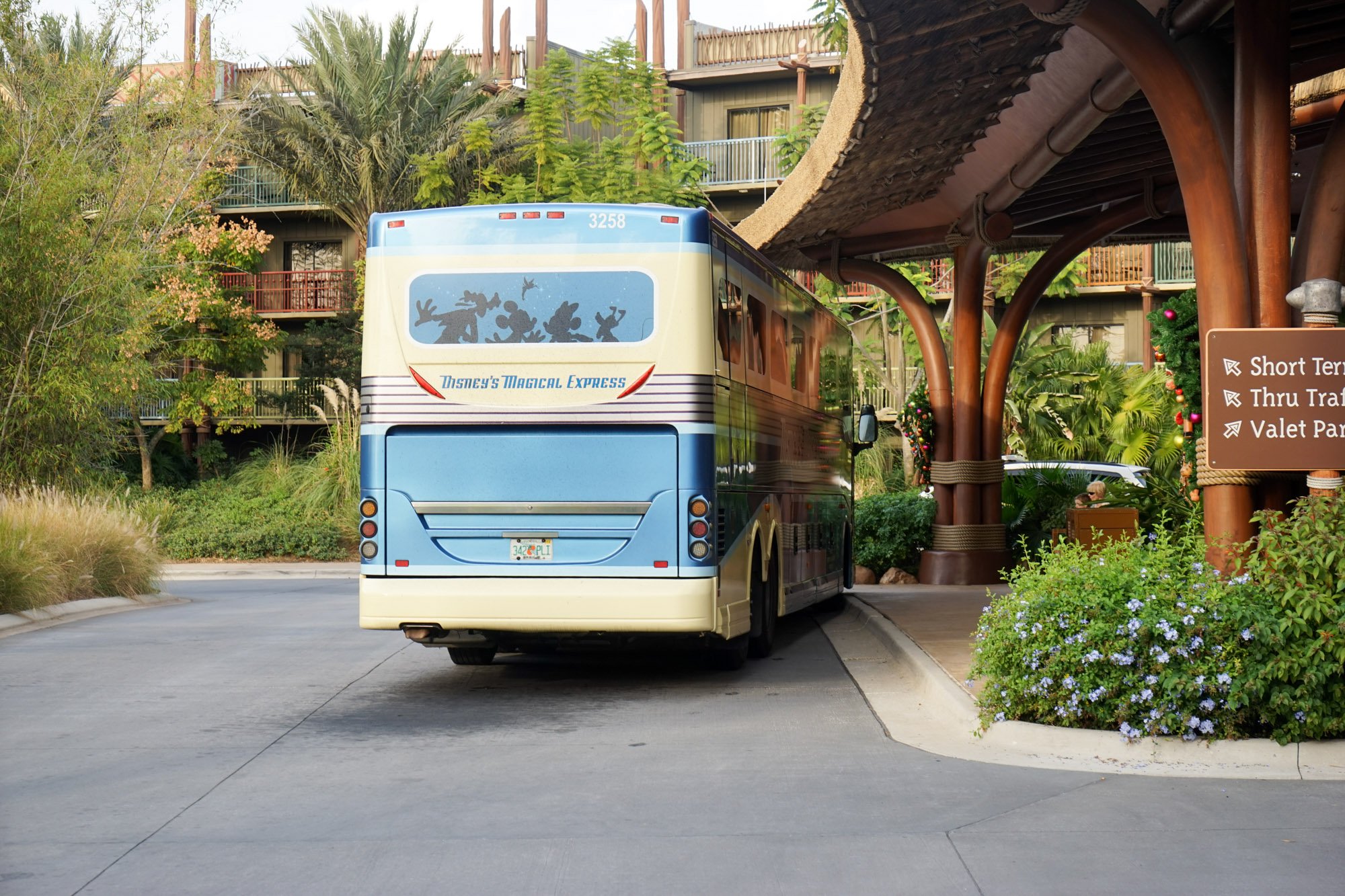 I was at Coronado Springs this trip. We stayed in the Casitas building. Technically our closest bus stop is #2, but the Gran Destino tower was actually closer for us to walk to so we often walked to stop #1. Both of our issues were at Stop 1 (On Sunday morning I went to Animal Kingdom from Stop 2 and didn’t have a problem).

We only stayed for 3 days, but the same thing happened on two separate mornings. On Saturday we were headed to the Magic Kingdom. We arrived at the bus stop at 8am. Disney states that the buses run every 20 minutes, so I usually get there early enough to assume that we just missed a bus and will wait a full 20 minutes. We had breakfast at the Grand Floridian at 9:30am but I wasn’t worried – bus at 8:20, ten minute drive to Magic Kingdom, get on the monorail and factor in maybe another 20 minutes for that. Still plenty of time with a lot of leeway.

Well, the bus did not show up until 8:40. By that time quite a crowd had gathered, because of course lots of families are trying to get to Magic Kingdom for a 9am opening in that time. We got on the bus but I’d say about 3 dozen people waiting did not because it was full. I don’t know how much longer they waited. Thank goodness we got on – the moderate resorts don’t have a queue line for buses like the values do, so people who just arrived and have only been waiting 5 minutes can kinda push up front and get on before others.

While I was annoyed and anxious, I figured it was probably an isolated incident (we got to our breakfast about 15 minutes late but they were still able to seat us). Fast forward to Monday. I’m at the bus stop for Hollywood Studios at 8:20. There is another couple and a few other people waiting but not many, so I probably just missed one. The screen says a bus will come at 8:33. Okay, not a terrible wait. Well, 8:33 comes and goes and then the screen just shows a line. By 8:45 people are wondering what’s going on and I can’t believe the same thing is happening again. A CM does come over and tells us he’s called for an extra Magic Kingdom bus. This bus does not arrive until 9:05. I waited 45 minutes. I asked the couple in front of me what time they got there and they said they had arrived at 8:10 and just saw the Hollywood Studios bus leaving. They waited almost an HOUR for a bus. 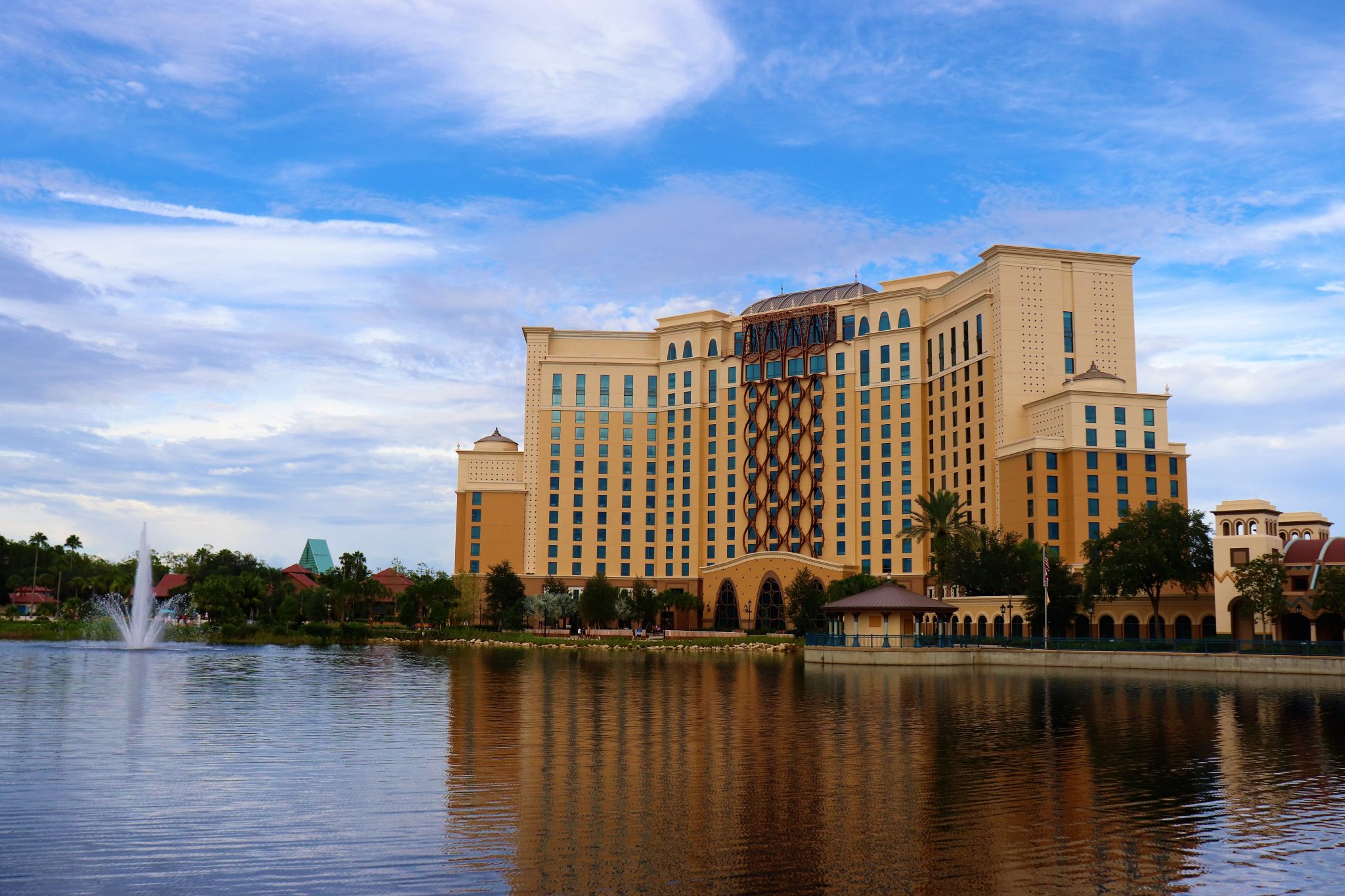 Is it certain resorts?

From the feedback I got on facebook, it seems most people have had positive experiences at the value resorts and negative ones at moderates and deluxes. I don’t know why this would be and you’d think the more you pay the better service you’d get.

I do wonder if it was something to do with the Tower location. Is it possible that because it’s so new it’s not yet included on all the bus routes? Also it’s the last stop for pick-ups on the route, so many times those buses are full or almost full by the time they arrive at that location. My friend is staying at the Gran Destino tower in October so I’ll be curious to hear of her experiences.

Maybe you just had bad luck!

Maybe, and I wish, but sadly I don’t think this was an isolated incident. Many other people waiting for the bus with me on both mornings had stories about 30+ minute waits that week, and friends and strangers on facebook had lots of stories too. If you have never had an issue with Disney buses, maybe YOU just have good luck!

For this to be happening during the most popular time to head to the theme parks (around 8-8:30am) seems like a particular problem. You’d expect the buses to be running more often. In fact, in the 45 minutes I waited for my Hollywood Studios buses I saw 4 for Magic Kingdom, 3 for Epcot, 2 for Animal Kingdom, and 1 for Disney Springs.

Did you tell Disney?

I wish I had higher up connections but I believe it’s important to give feedback on anything that really affects your trip (positive and negative – I had some great cast members I recognized too!). I tweeted at Disney and got a generic response. I’m publishing this blog post, which I doubt Disney will see or care about, but if we all speak up maybe they will hear so I’m just trying to do my part. 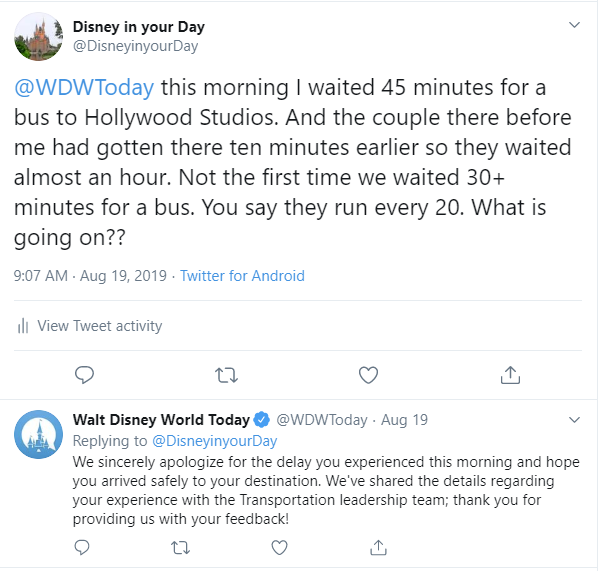 What could be going on?

I honestly don’t know. I shared my theory about it possibly being an issue with the new Gran Destino tower, but that doesn’t account for all the other people who have had issues elsewhere. A friend of mine did mention that Disney has a hard time hiring the number of bus drivers they need. While that could certainly play a role, I also think it’s important to keep guests updated about what is happening.

I don’t really think so. I had multiple people tell me this on Twitter and Facebook though. I was told that waiting for buses was “part of the experience” and that maybe “the buses were already full so it would have been pointless for them to stop by.”

Maybe so, but take a look at how Disney advertises their bus service. They cite “save time, money, and the hassle of driving” and that they “operate at approximately 20-minute intervals.” I am in general an extremely understanding person and if something happened one time it’s just part of life. But for it to happen twice in three days and hear stories from so many others just points to some sort of flaw in what they are trying to offer. I know many people love Disney and think the company can do everything right (I love them too, of course!), but if there’s a problem I think it’s appropriate to point it out and see if we can fix it.

What can we do?

I think the best thing you can do is let Disney know if you have an issue. You can actually call the transportation number at 407-WDW-RIDE and let them know what’s happening while you’re there and they may be able to send an extra bus. I didn’t know about this until after my trip or else I would have tried it. And share feedback afterwards. Disney is all about the guest experience so if you have a less than magical time they will want to fix it.

If you’re really in a pinch you could take lyft or uber. While many feel it’s worth paying for the convenience, I don’t think you should HAVE to do this to not wait an hour to get to the parks. If you want to save 20 minutes I get that, but it shouldn’t be pay for it or wait hours when you’re only supposed to wait up to 20 minutes. Renting a car is really costly now because of the parking fees at the resorts.

I’d also say I don’t recommend taking a Minnie van. They price they charge is absurd. It’s $25 plus mileage… so you’d pay maybe $30. A regular lyft from Coronado to Hollywood Studios would have cost me $8 on Monday morning. I’ve also heard speculation that Disney isn’t working as hard on the bus issue as they might be because they want to convince more people to take Minnie vans so they can make more money. I don’t know if there’s any legitimacy to this, but if that’s the case I don’t want to reward it either.

I’d really love to hear about your experiences with Disney buses, good or bad. Please let me know in the comments how it’s been for you recently!