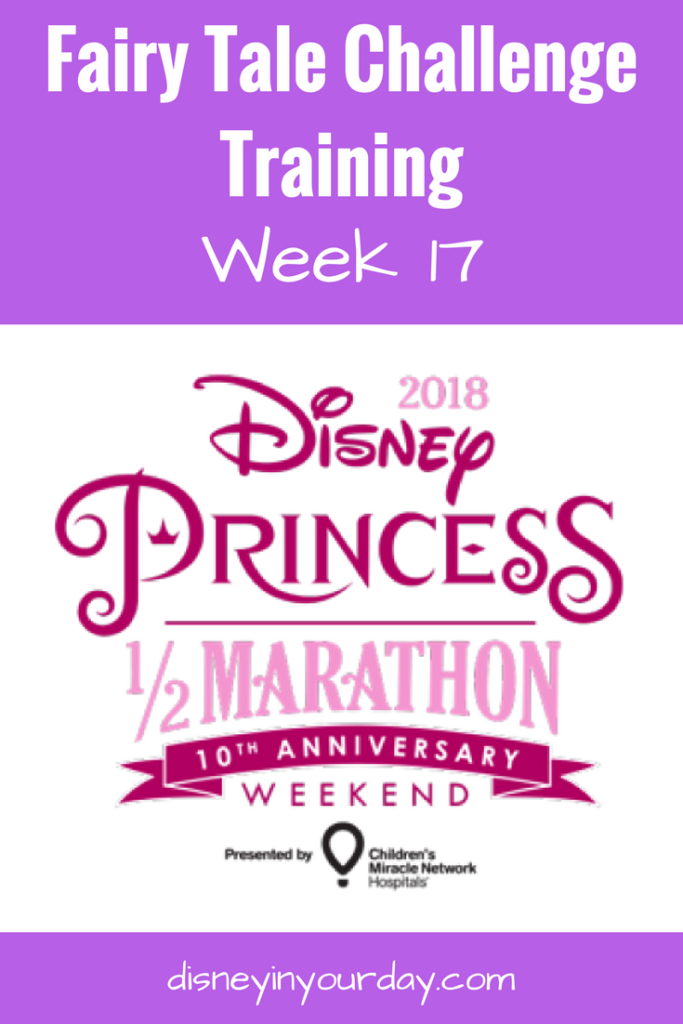 Here we are – less than a week away from the Fairy Tale Challenge!  I feel pretty good, I feel pretty ready, but I do also feel a little nervous.  I know it’s a mental thing and I need to ignore it, but this will be the first official race I’ve done after my injury and all the physical therapy.  I’ve done two 13 mile training runs pain free so I know I should be fine, but I always get scared the pain will just magically reappear.  At the very least, if it does there will be Disney characters to distract me!

Since it the week right before the half marathon it’s an easier week, with two short runs and a 4 mile run.

On Monday I headed to the gym before work and got my run in on the treadmill.  I took it a little easier and slower than usual since I had just done the 13 miles on Saturday and I didn’t want to push anything too hard.

Thursday we had unusually nice weather in Pennsylvania for February.  Often in the winter even if it’s nice out I can’t run outside because it’s dark by the time I leave work.  But it’s late enough in the year now that it still stays light til about 6.  So I threw on my running clothes right at 5 when work was done and ran right around the neighborhood outside of the library.  I think it’s pretty clear to look at my name compared to the other short runs that I’ve been doing and see that I am much more suited to running outside than I am on the treadmill.  It felt so, so good to have this run.

And then an amazing as I felt with my Thursday run, it switched right back again and I REALLY struggled through the 4 miles on Sunday.  I believe it was a combination of things.  I had not treated my body in an ideal way for running the day before (didn’t drink enough water, ate some bad food, didn’t get enough sleep).  And I went to a different gym than my normal one with different treadmills.  There were some things I liked about it, like the fans built into the treadmills.  But there was no speed interval key, which my gym has.  And when alternating between running and walking every minute it kind of messed with my flow to have to arrow all the way up and all the way down between speeds.  And I had a lot of trouble breathing for some reason that day.  This gym has all their treadmills on the second floor, and I think it was hotter up there than I was used to.  Even with the little built in fan blowing I felt much hotter than I normally do running inside.  But the important thing is I got it done.

Who else is going to be at the Princess races next weekend? Are you excited?