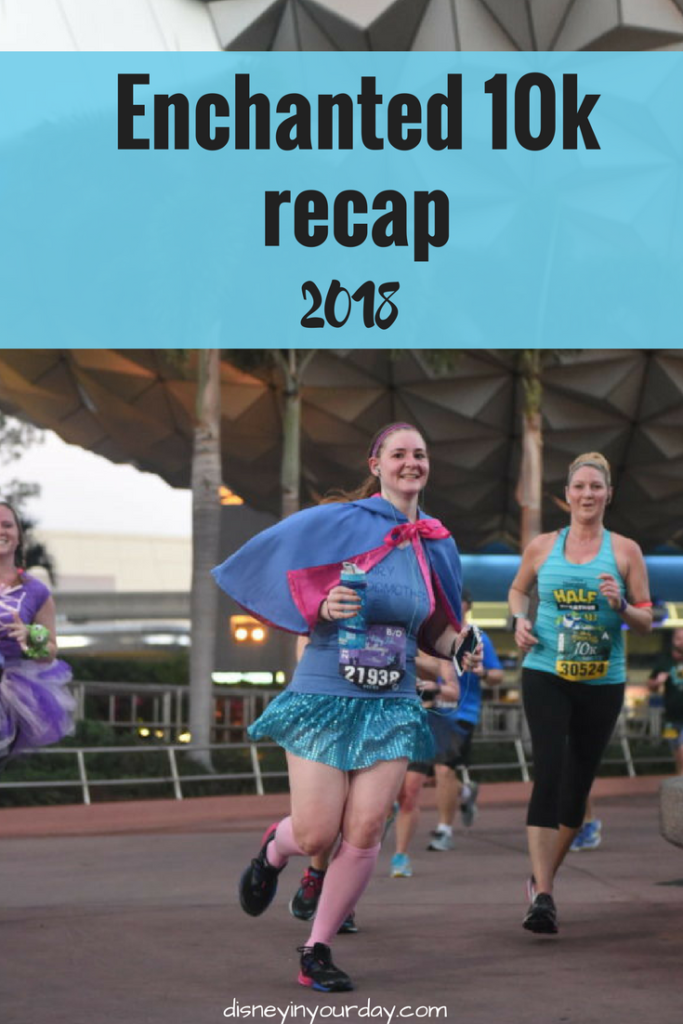 2018 marks the 5th anniversary of the Enchanted 10k, and it also happens to mark my 5th year running this event!  The inaugural Enchanted 10k in 2014 was my first real race ever, so this one is pretty special to me.  Like all Disney races, we were up bright and early at 3am to get ready.  We were staying at the Contemporary this time, but they don’t run the monorail for the 10k so it was down to the buses. 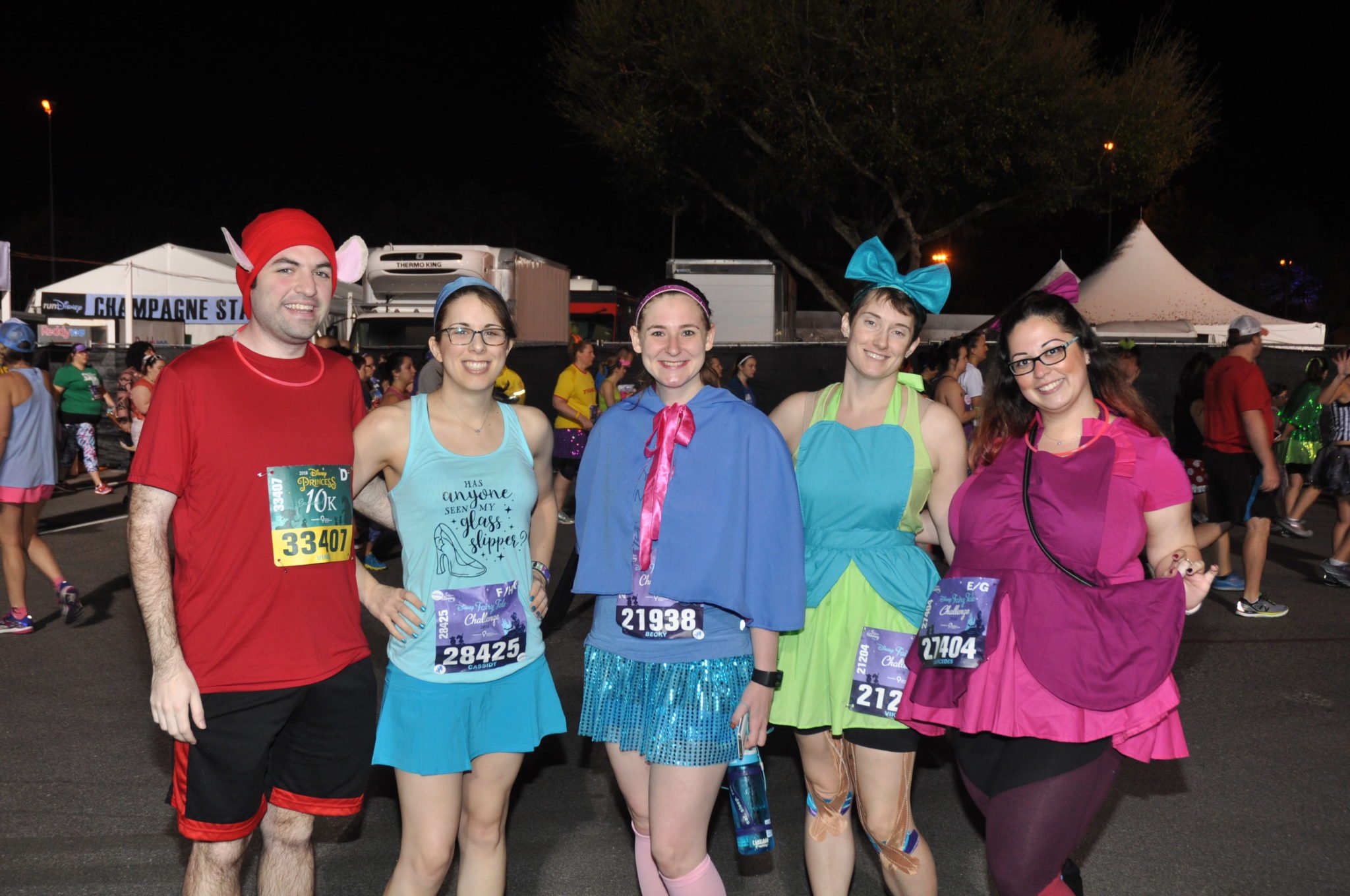 There were 5 people from our group running so we had planned a group costume with everyone representing a different character from Cinderella: we had Cinderella, the two wicked stepsisters, the fairy godmother, and Jaq.  I was the fairy godmother and had my cape and everything!

For once the weather was actually warm and I didn’t need any sort of throw away layer. We sat comfortably in the corrals.  I started in B and while they did waves in each corral this year, I was fairly close to the front and I think I started in the 2nd or 3rd wave of corral B.  I started pretty early, around 5:40. 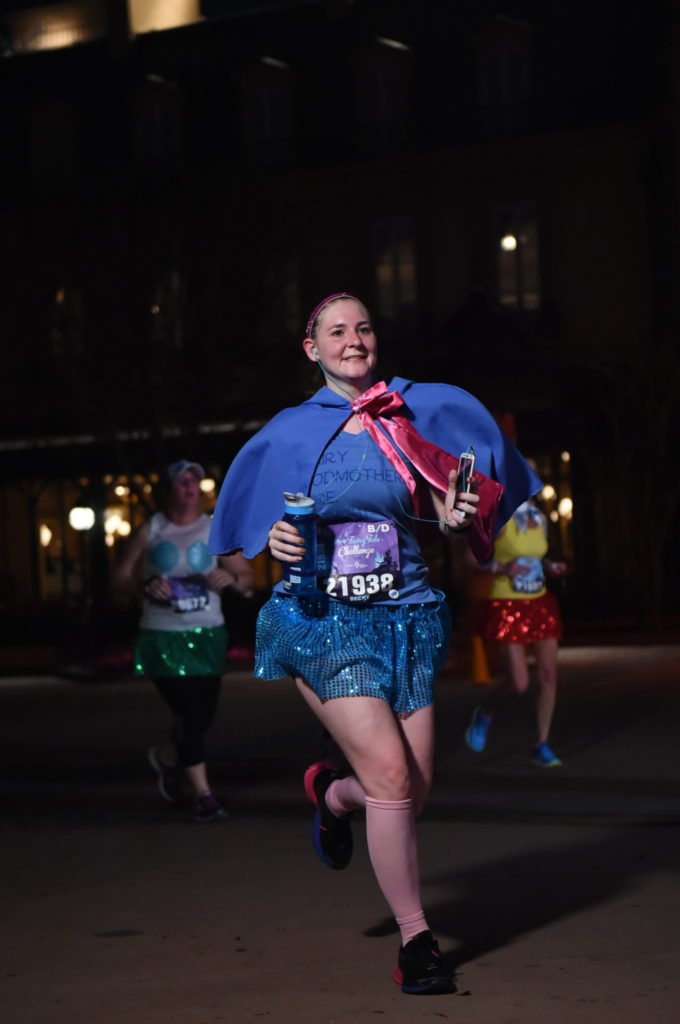 A lot of runners don’t take the 10k very seriously.  While I understand this because of the challenge (and I don’t push all out) I still like to try and run when I can.  Even being this far up it was a struggle to get a decent pace for awhile in this race.  From the beginning people were just strolling along and I had to do a lot of weaving just to get into an easy jog.  I don’t know, I just feel like if you know you’re going to go a lot slower than the pace that got you into the corral, maybe you shouldn’t start right near the front (and center?).  Runner etticque was definitely not as good for the 10k as it was for the half.

But it’s a Disney race so these things don’t bother me that much as I’m there to enjoy it!  We passed the typical few character stops early on in the race.  They had Mulan and Mushu (darn, that was my costume the next day!), Lilo and Stitch, and Pocahontas and Meeko.  Then it was into World Showcase, my favorite part!  It was still pretty dark at that point, but it’s beautiful lit up at night.  And they have lots of characters out in the World Showcase.  I stopped for a photo with the Genie in Morocco. 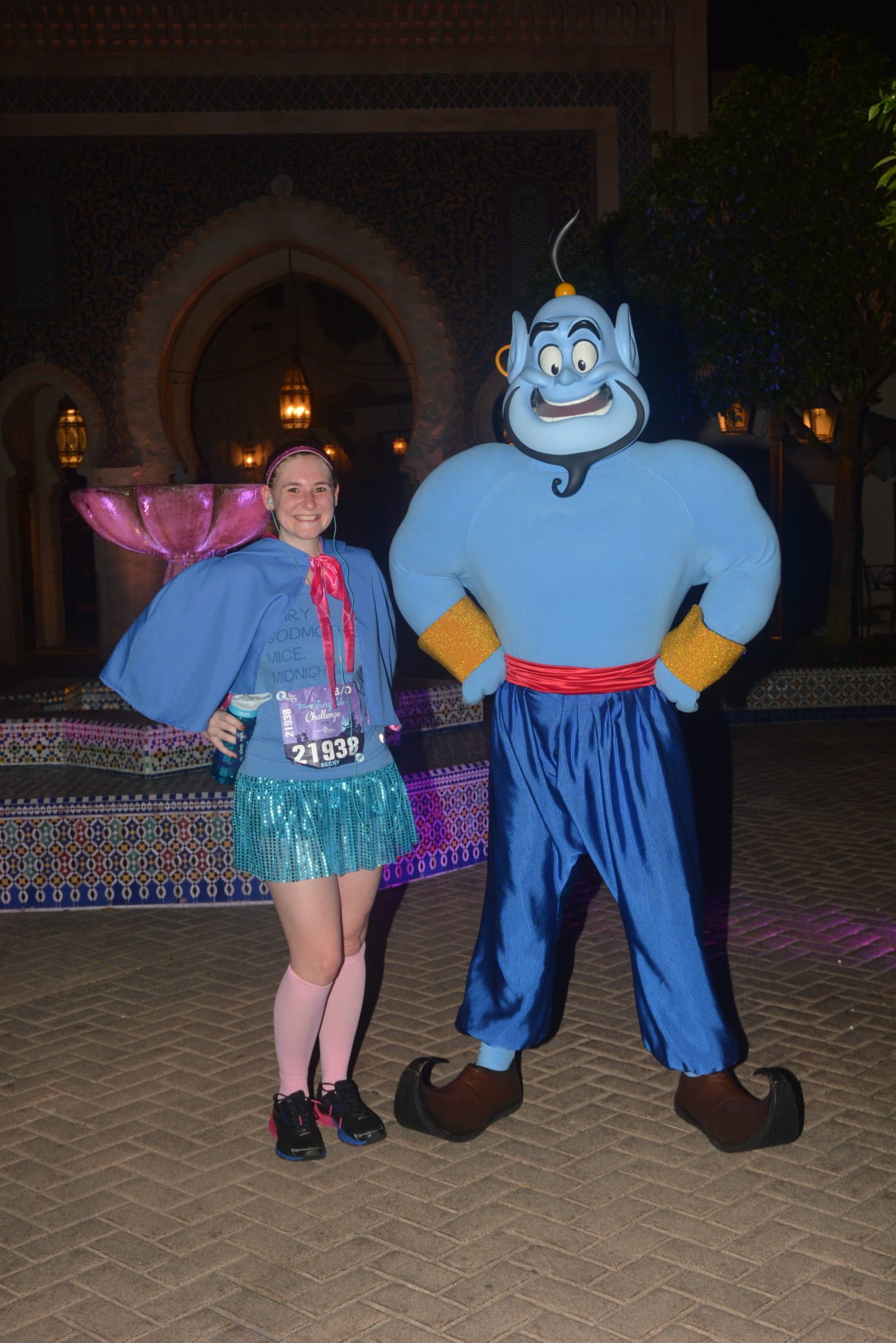 Then it was on to the Boardwalk, and now the sun was starting to rise.  I enjoy going around the Boardwalk.  The area where Princess Minnie has been in the past was under construction (though she was available for a meet and greet before and after the race).  But when we went through the construction area there were some “sexy construction workers” cheering us on!  That was much appreciated 😉 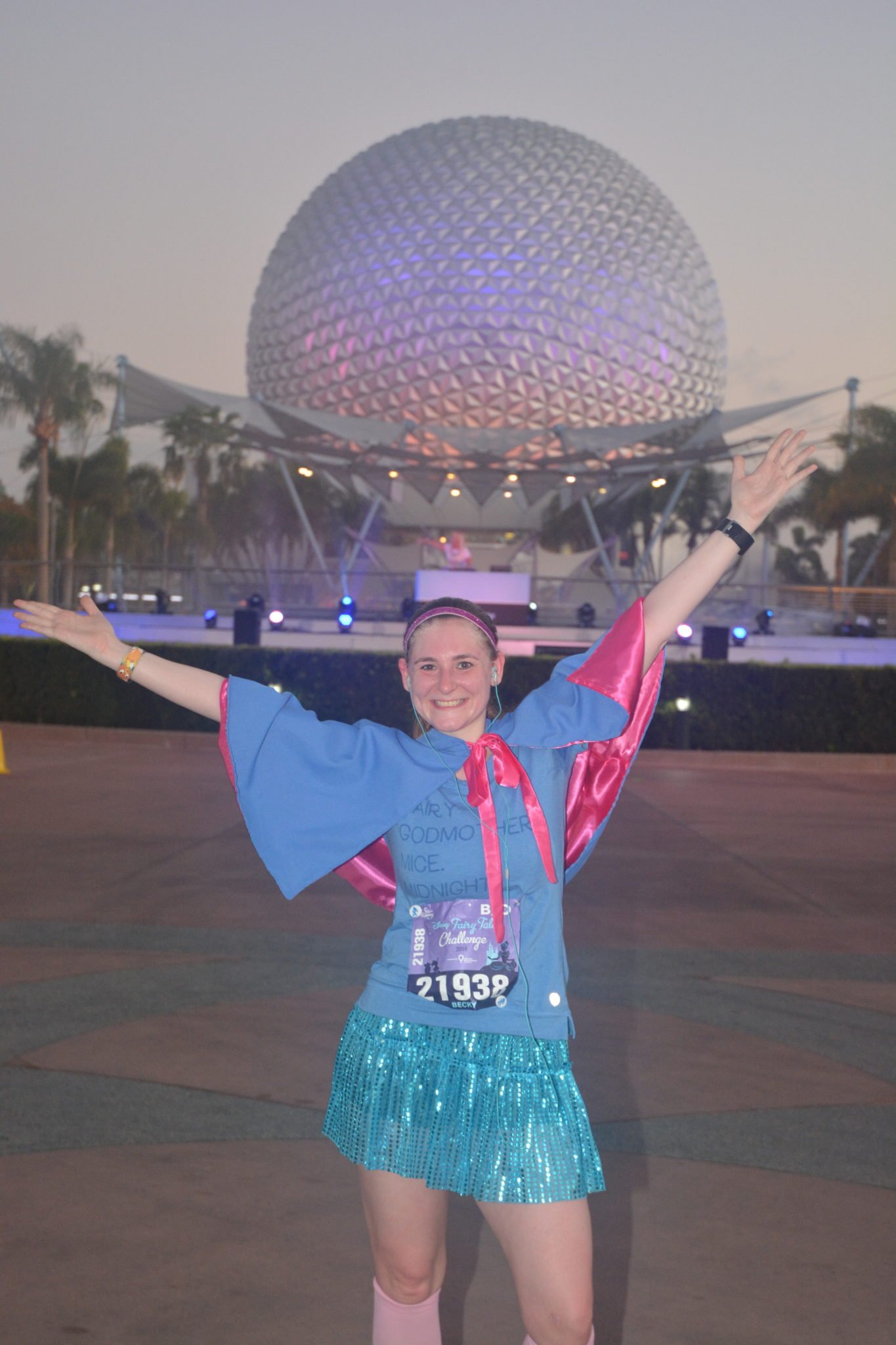 Then it’s back into Epcot, where we eventually ran past Spaceship Earth and I stopped for a photo in front of it.  We made our way on and I crossed the finish line – and ended up with what might be my best finish line photo yet! 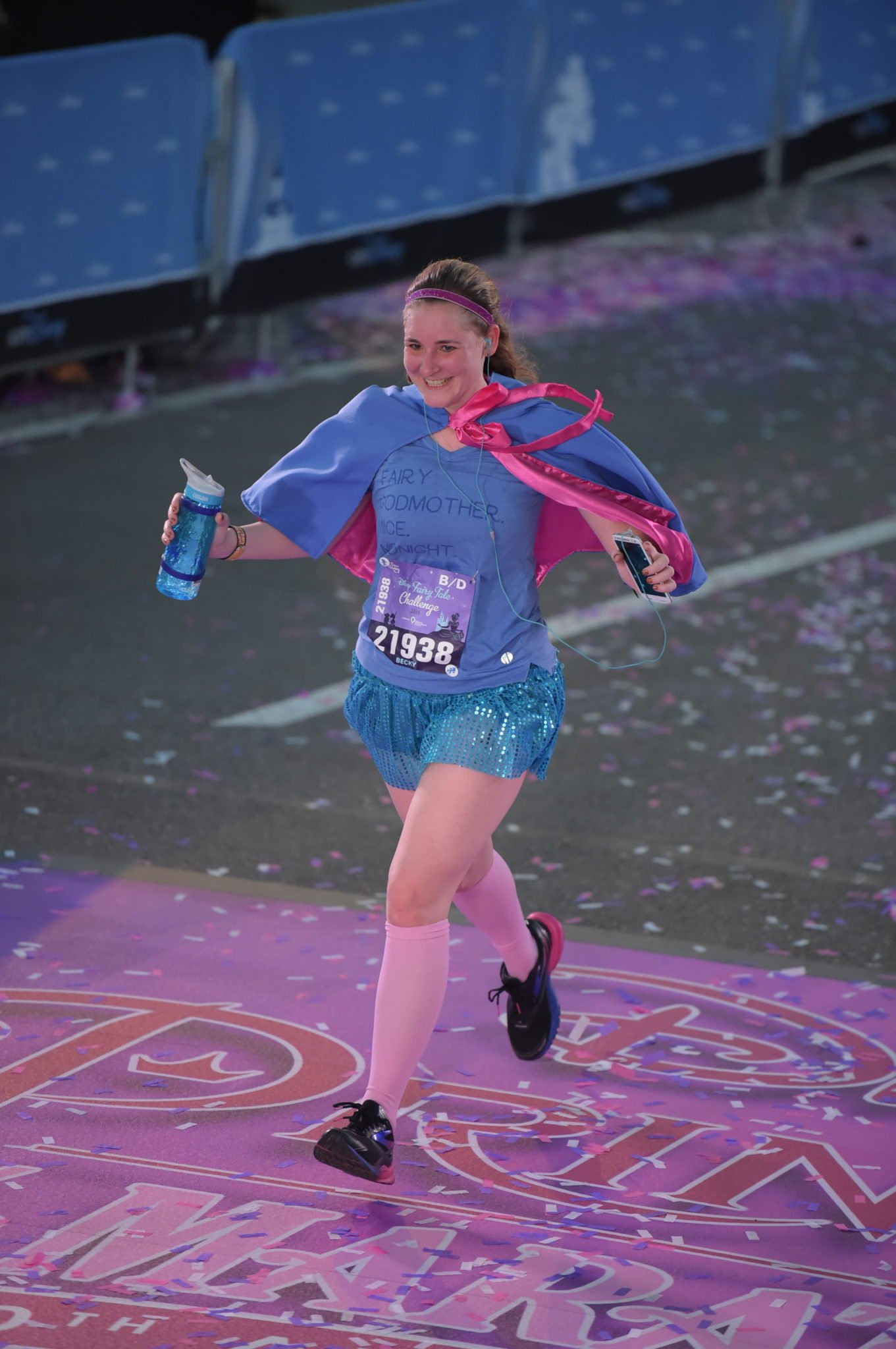 My official time was 1:10:27 with a pace of 11:21 min/mile and I’m thrilled with that considering I stopped for two photos and started out slowly.  It’s certainly my best Enchanted 10k time yet!  This race is always fun, though the course is a bit crowded, and I had a good time again this year.

And if you’re curious, here’s a list of the character stops on the course this year:

Have you ever done the Enchanted 10k? Which characters would you want to stop and meet?