I did it!! I not only ran my second full marathon, I did it as part of the Dopey Challenge AND beat my previous marathon time by over 50 minutes. The Disney World marathon was overall a great, magical experience. There are definitely plenty of parts of running the marathon that are tough, but I’m really happy I did it this year.

One thing that had changed this year was the start time – instead of starting at 5:30am, it began at 5:00am. That meant an even earlier wake up time. We got up at 2:30 and were on the bus by 3. Even that early in the morning there was some traffic and I think we were off the bus by 3:45. That was a lot better than other stories I heard, of people being on a bus at 3 and not arriving until almost 5! The traffic was a nightmare, particularly because the course was different this year and the beginning miles ran through the Epcot parking lot and Epcot.

I was in my corral around 4:30, expecting to start around 5:10 since I was in corral D. They actually ended up not starting the first corral until 5:20 due to the traffic and not having the course cleared in time. I’m fortunate I wasn’t caught in that but it sounded so stressful for those who were. I hope they figure it out for next year. The delayed start was rough for a few reasons – it was even more time sitting around or standing around and having my muscles tighten up, and it meant more time in the hot sun later in the day… but we’ll get to that.

I started around 5:30am and started with my run/walk/run intervals. To be honest miles 1-2 were some of the worst of the race for me, at least until about 18. Everything felt so stiff, tight, and painful, I was actually fearful that maybe the earlier races had taken their toll and I was in for a really rough go. However everything loosened up after about two and a half miles and I felt much better.

I also passed my spectators at about mile 2! First I saw Jason and Kristin, and then a little further down was Mercedes. It’s always a bright spot when you have someone cheering for you! And right after I saw them it was time to enter Epcot. There were also some character stops around here, though I personally didn’t stop until later in the race. I’ll have a list of all the characters I saw on the course at the end. 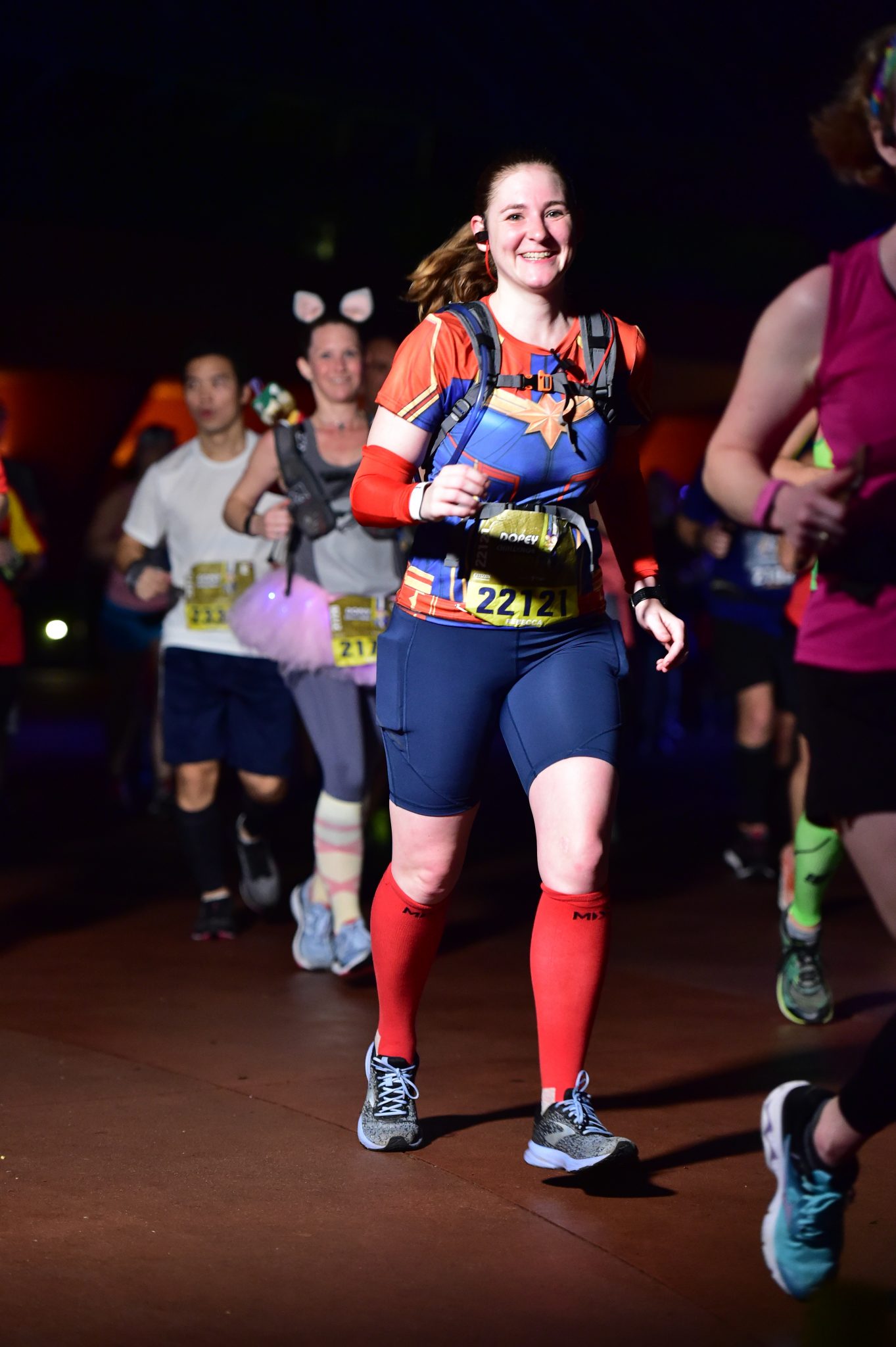 I shed my arm sleeves upon leaving Epcot because it was hot that morning. The sun was not up yet but it was going to be bad. The humidity was already high and it was close to 80 degrees. We then were on the roads to Magic Kingdom. I had it in my head that I would shorten my running intervals every so often – I was thinking by fourths, so once I reached 6.5 I would slow down a little. However, I hit mile 6.5 and felt great so I just kept going.

Right around mile 8 I stopped for my first character photo! It was Flik and Atta from a Bug’s Life. I’ve never seen Atta and the line wasn’t too bad so I figured why not. Then it was on to the TTC, where Kristin was waiting to cheer me on! Having familiar faces to look forard to really helped me keep moving. 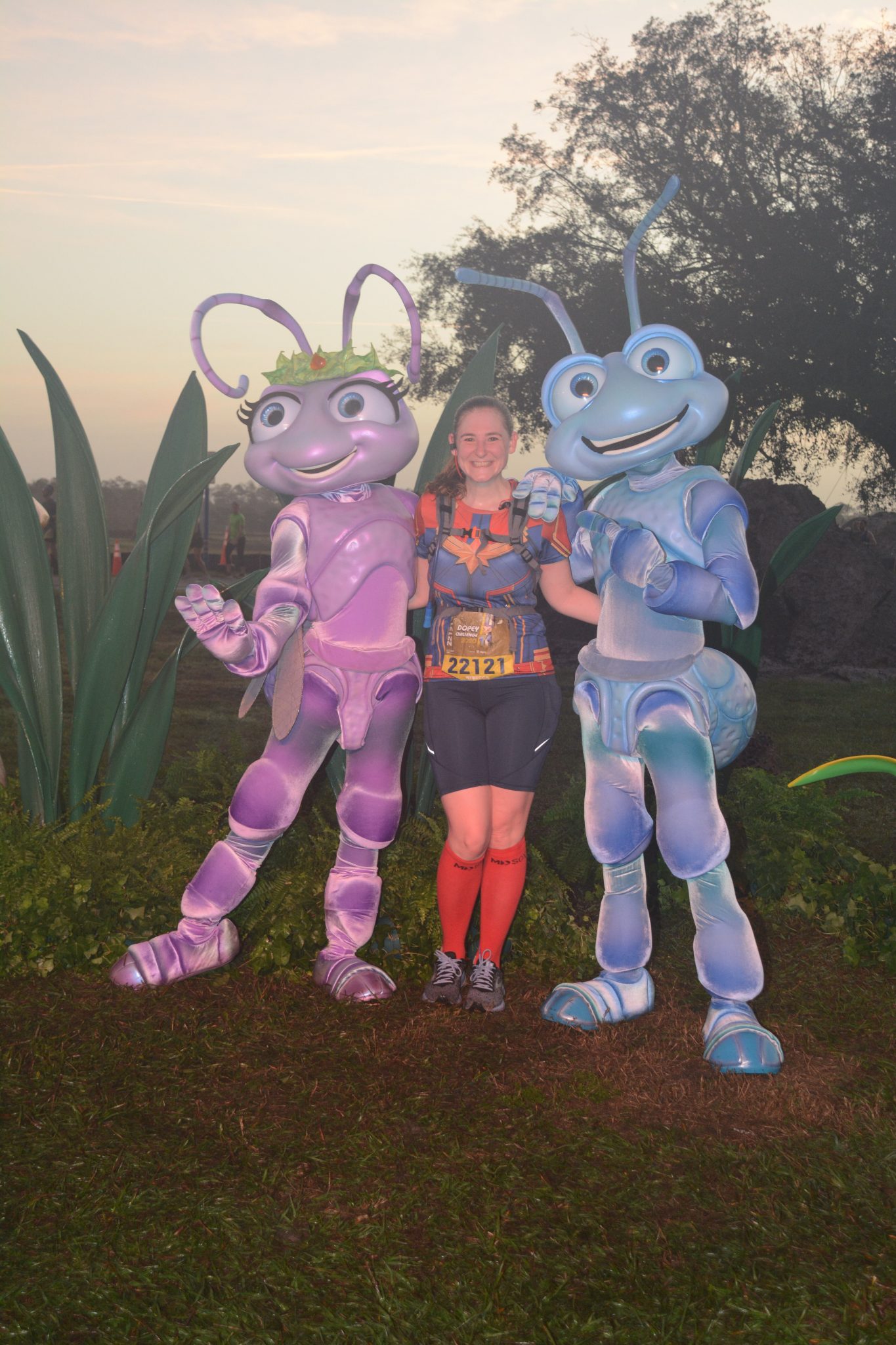 Mile 10 was right outside of Magic Kingdom and even with the character stop I actually had a (slightly) negative split time from when I hit the mile 5 mat. At mile 5 I had been at a 12:15 min/mile pace, and at mile 10 I was at a 12:13. I think it was because of having less slower people in front of me to weave around and the fact that I was warmed up a bit.

One of the most exciting parts of the race is entering Magic Kingdom! It usually has the largest crowd, and running down Main Street while everyone is cheering for you is an incredible feeling. I also see Jason here and always stop to give him a kiss!

I had also been leap frogging my friend Danielle and her boyfriend for awhile and had seen them throughout the race. We caught up right by the castle and got a selfie together. That moment felt so special! 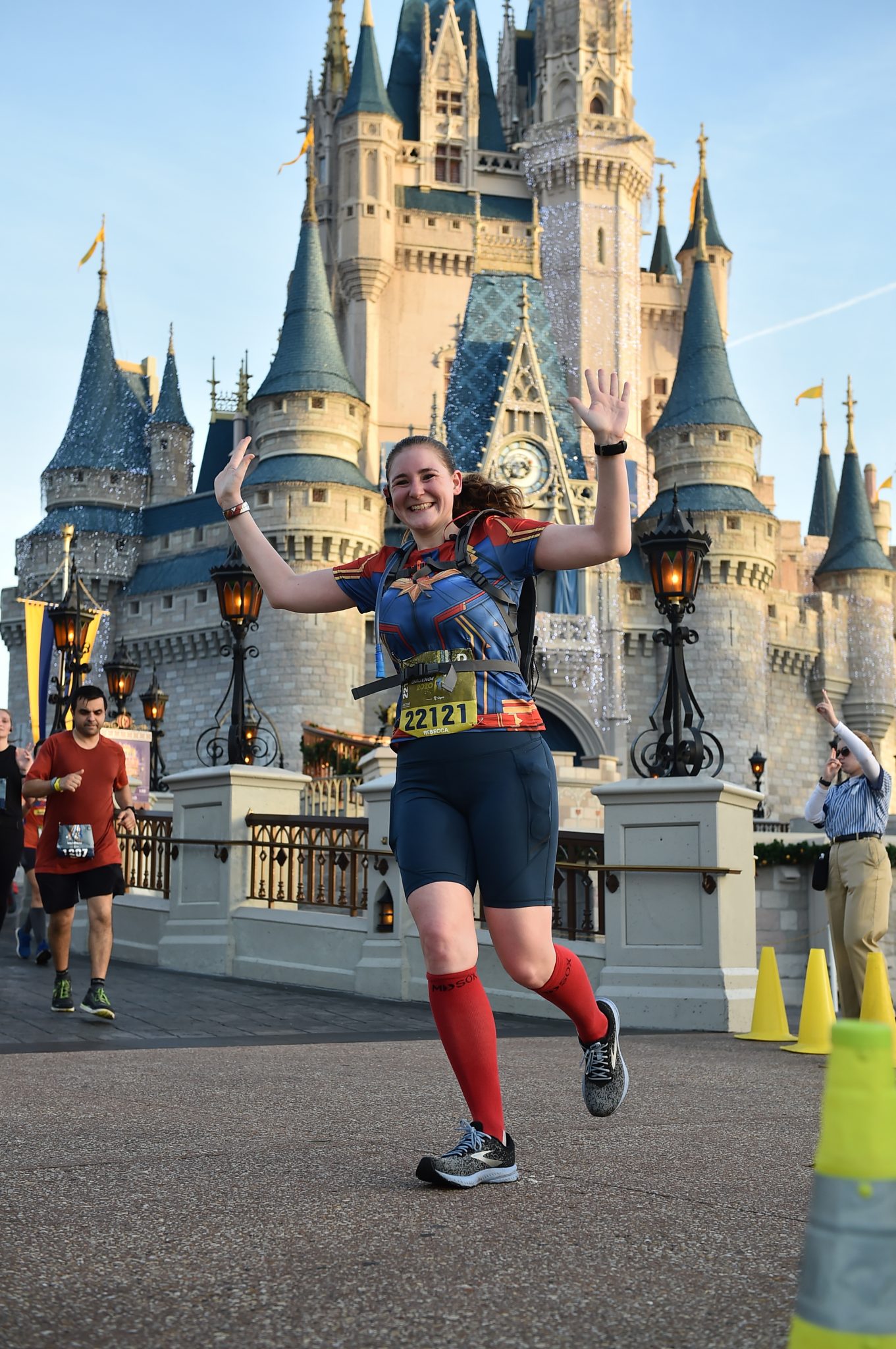 There are also lots of characters here, which means my time often slows down. Even without stopping everyone is slowing down, looking around, taking pictures. I had thought I might slow my intervals around mile 9-10 but I was still feeling strong so I kept it up. I did stop for a picture with Sebastian the crab though, because how fun is he?! 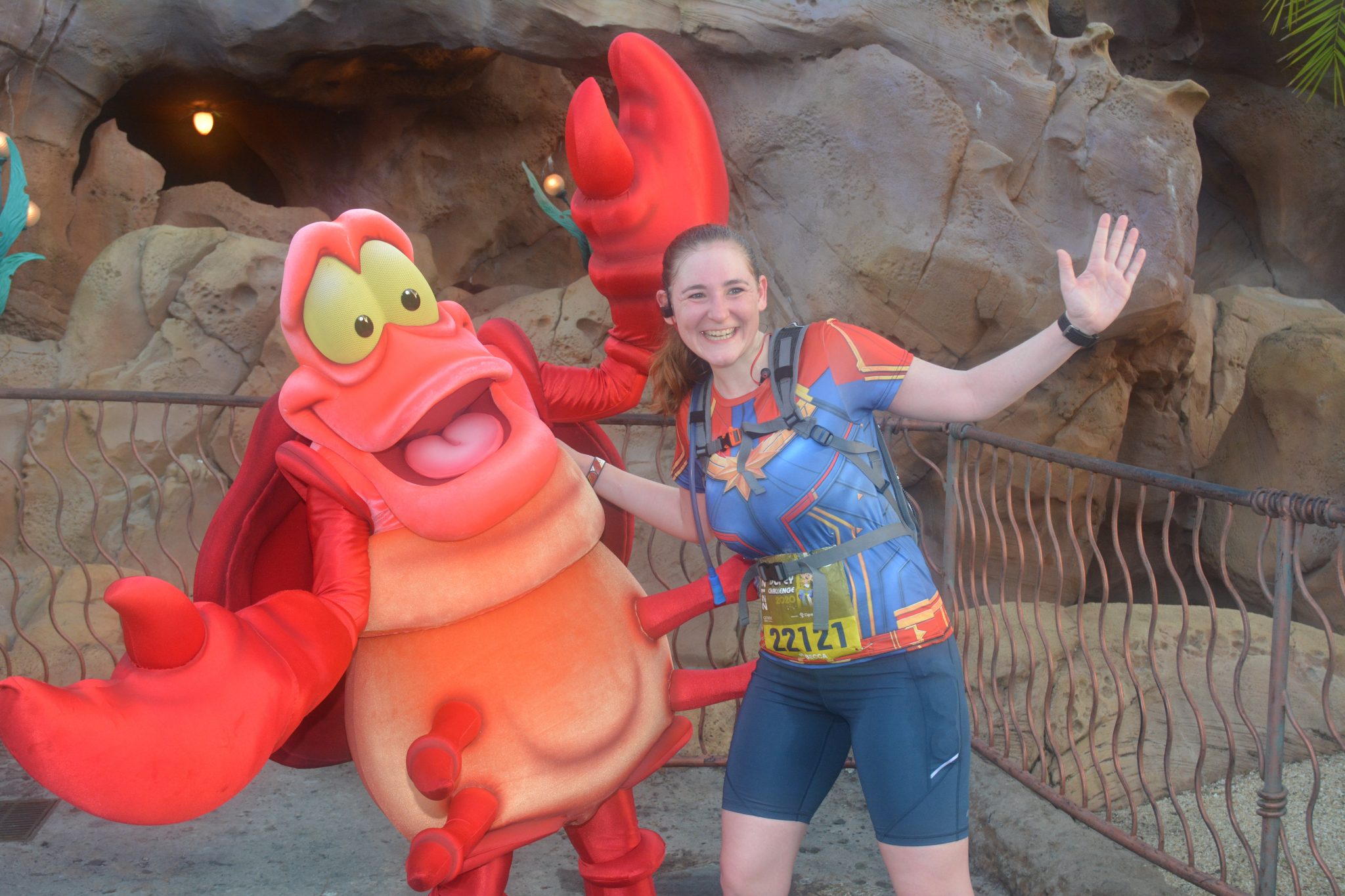 And of course running through the castle is pretty great. Then it’s up through Liberty Square, through Frontierland, and out the backstage gates where the parade floats are. I grabbed a quick photo with the Maleficent dragon and kept on truckin’. 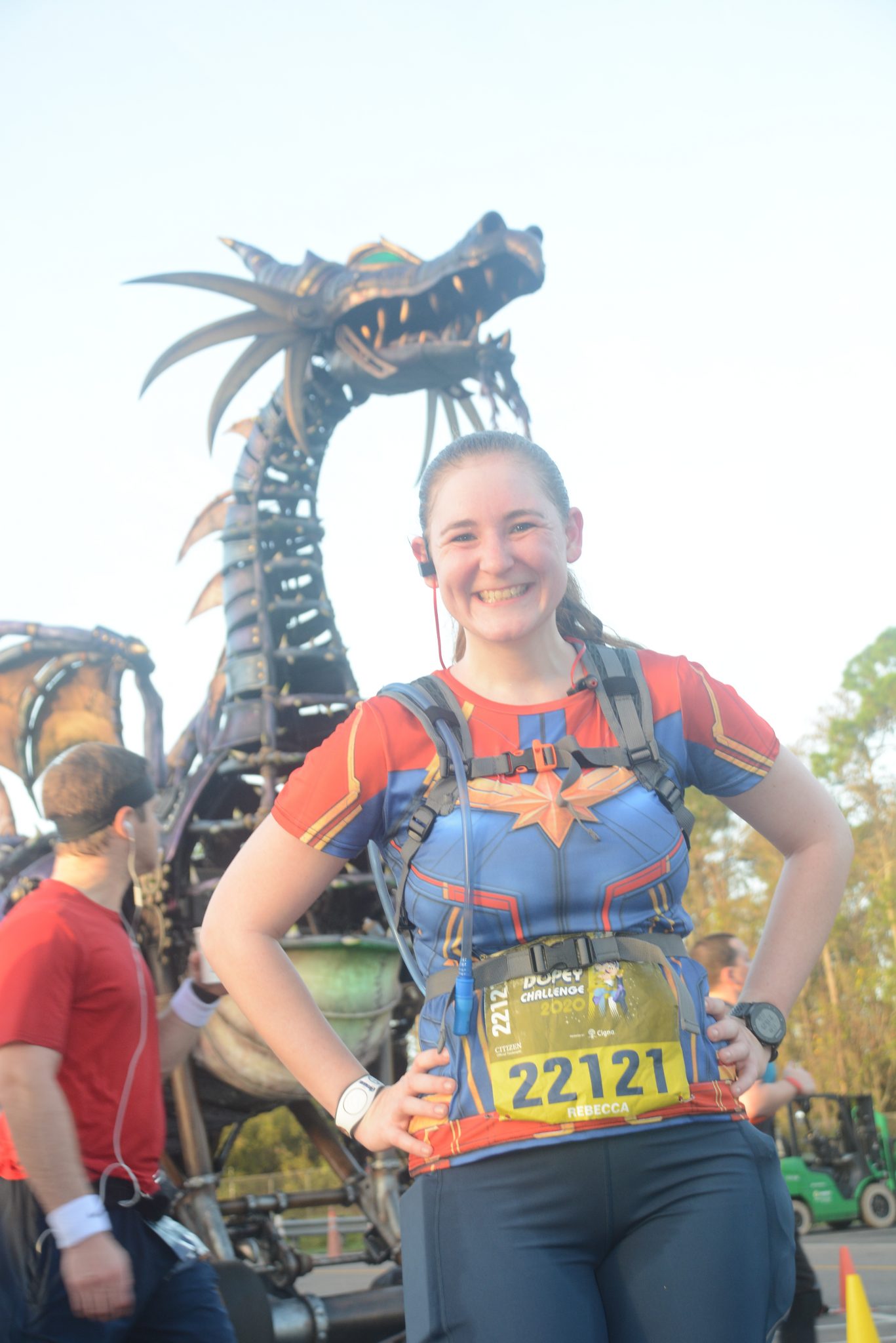 Not surprisingly my pace had slowed at MK thanks to the stops and the crowds, and I crossed the half marathon point with a pace of 12:21 min/mile. But I was thrilled with that, especially given the longer line for Sebastian! I also cut my intervals just a little bit shorter after mile 13.

Right around here is also when I saw Kristin and Jason again! They were at the Polynesian and I was so happy to see them! It was a little tough to spot them because the sun was rising right behind them. Which also meant something else – it was about to get even HOTTER.

The miles before Animal Kingdom got a little rough. The humidity and heat was bad. I don’t think I’ve ever sweat so much in my life. Just running on the roads is boring, though I have to say the volunteers at the water stops and med tents were amazing. I am so thankful to volunteers, that is not an easy job. I had powerade and water at every stop, in addition to my hydration pack.

One highlight was passing a little orange bird statue with his theme song playing! (yes, he has a theme song). I took a selfie here of course. Then before Animal Kingdom they had one of the goats out, so it seemed like another good opportunity for a selfie. 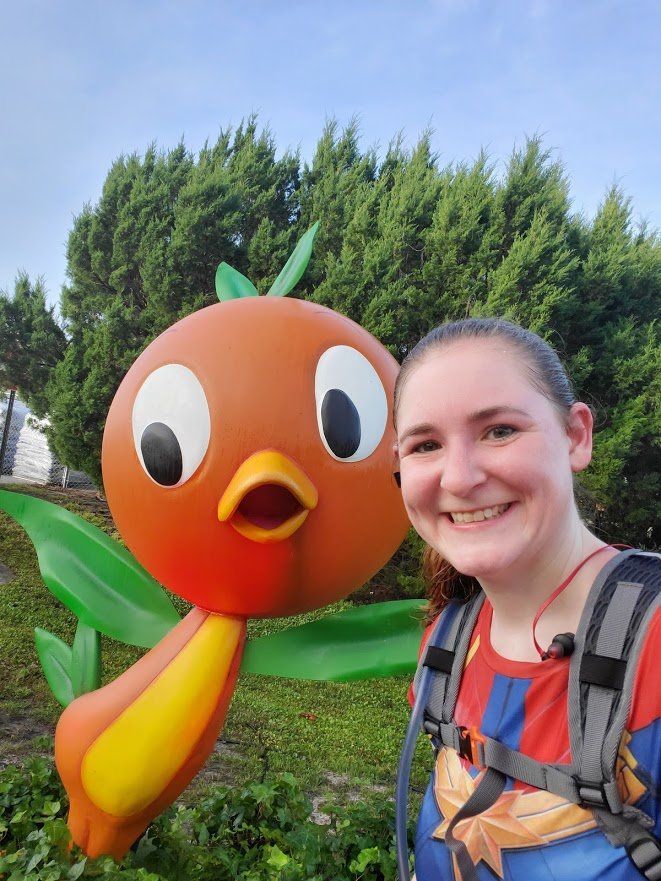 Entering Animal Kingdom was major because it’s much more exciting to be in a theme park! Plus I was hoping to ride Everest, like I did during my first Disney World marathon. It was about 8:58 when I entered AK so I thought my timing was perfect. It was literally 9:00 on the dot when I hit Everest… and it wasn’t running yet. I asked the attendant if it would be up in a few minutes and she said no. I don’t know why it had a delayed opening but I would not be riding a roller coaster during this marathon. 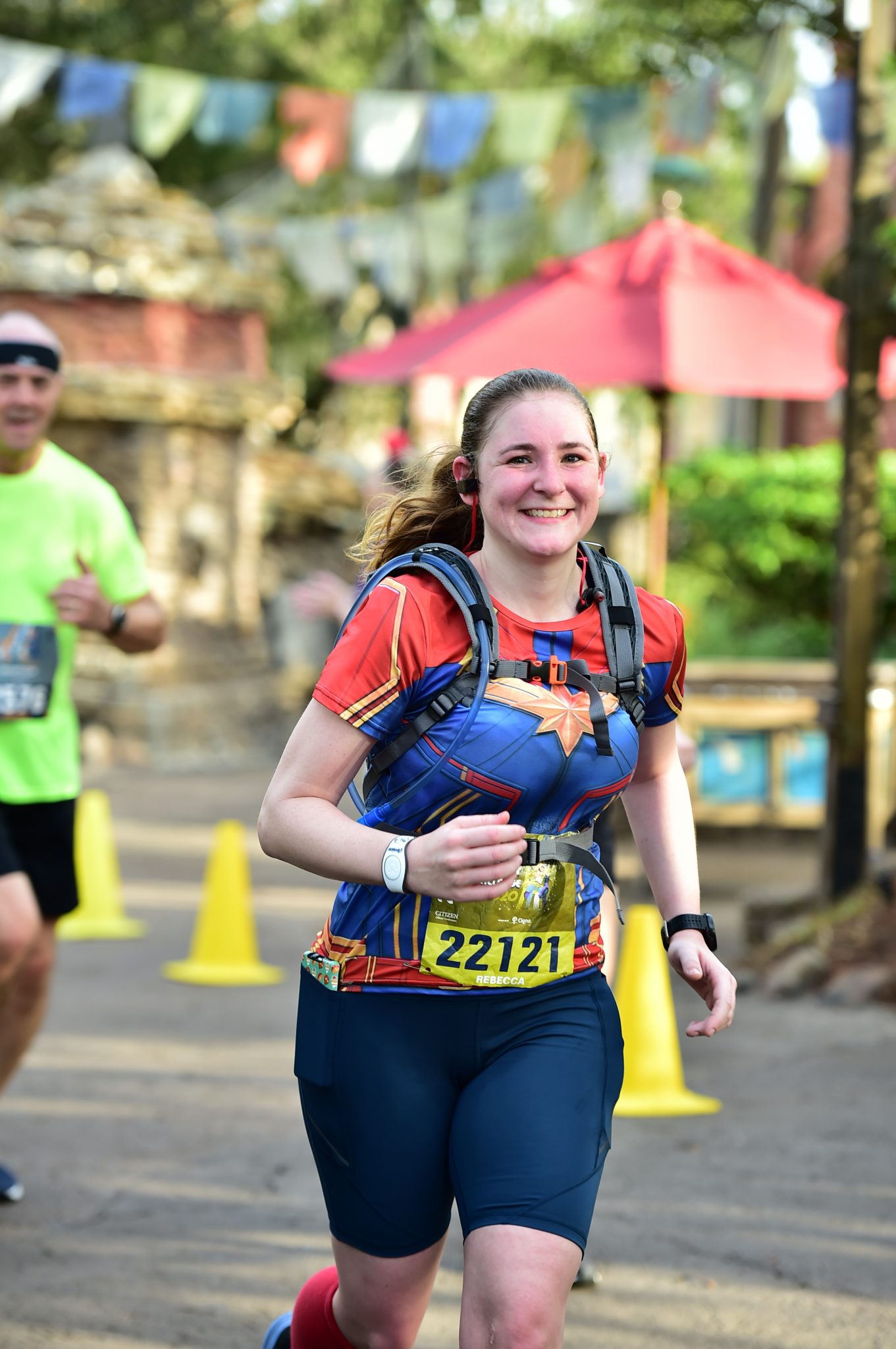 I was not only disappointed but I had hoped for a few minutes sitting break for my back. Nothing to do but keep going. I stopped for a photo with Minnie and while I was waiting I stretched my back as much as I could. It helped a little. 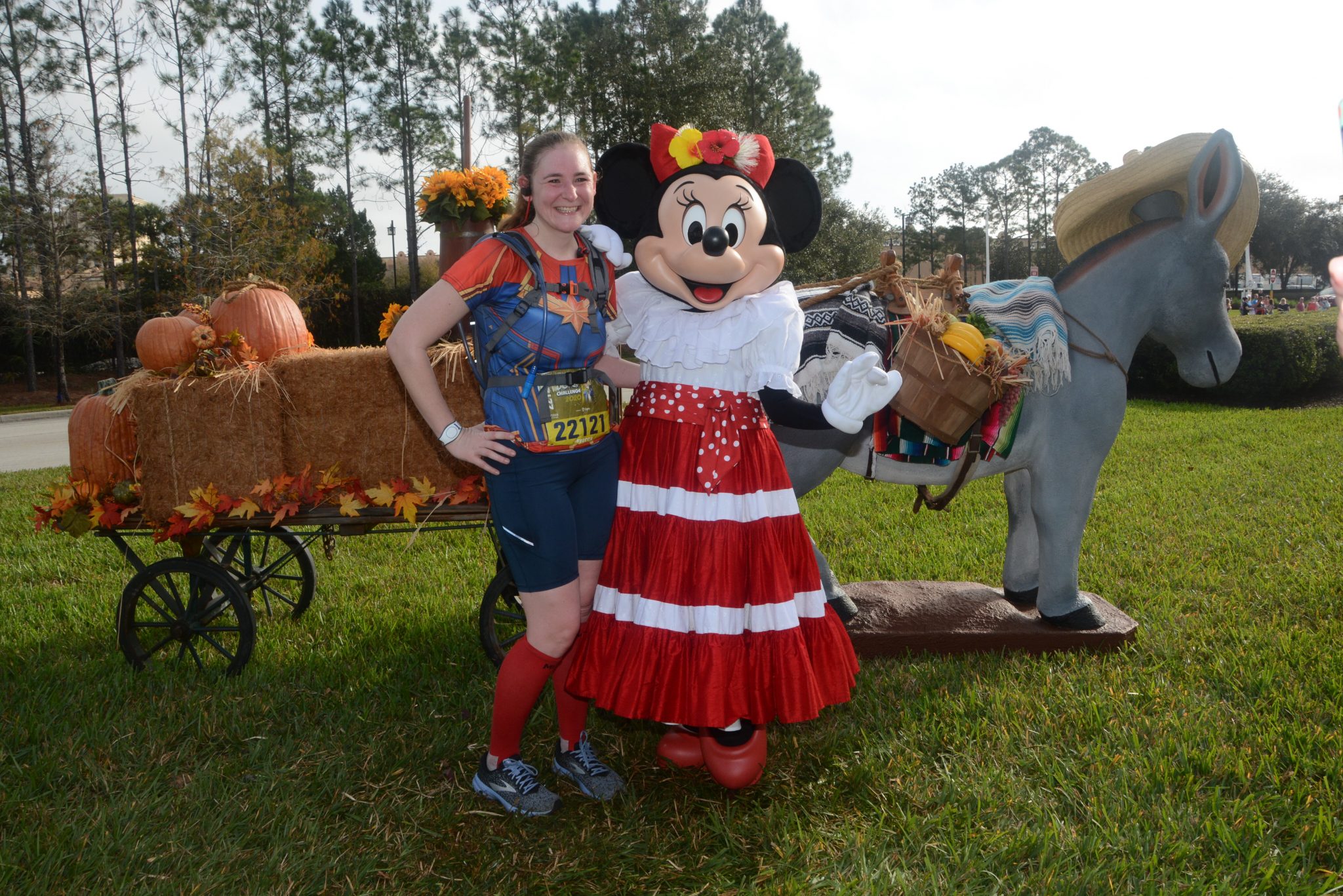 There was another timing mat at mile 20, and I was shocked to see that my pace was 12:22. That’s incredibly consistent from my mile 13 pace – I expected to be a lot slower. I had been feeling strong, but I knew these last 6.2 miles would be some of the toughest I’ve ever run. Not only did I have 20 miles on my feet already that morning, as well as a total of 42 miles from the past 4 days, but it was also insanely hot and and humid.

Disney changed the course this year to run through Blizzard Beach rather than Wide World of Sports this year. Many people were excited about this change and hated Wide World of Sports (I had no issues with it the one time I ran). Take back your excitement because Blizzard Beach was probably the worst part of the Disney World marathon. The majority of it was running a loop around the parking lot, which was a huge, open area of pavement with no shade. The sun beating down incessantly. It was brutal. Even in the park it was tight and twisty. There was one character stop there, with Olaf, while I remember having a whole bunch in Wide World of Sports. The one highlight for me was when I was coming out of Blizzard Beach and Danielle and Jeff were heading in and we were able to cheer for each other. Seeing her gave me just a tiny bit more energy! 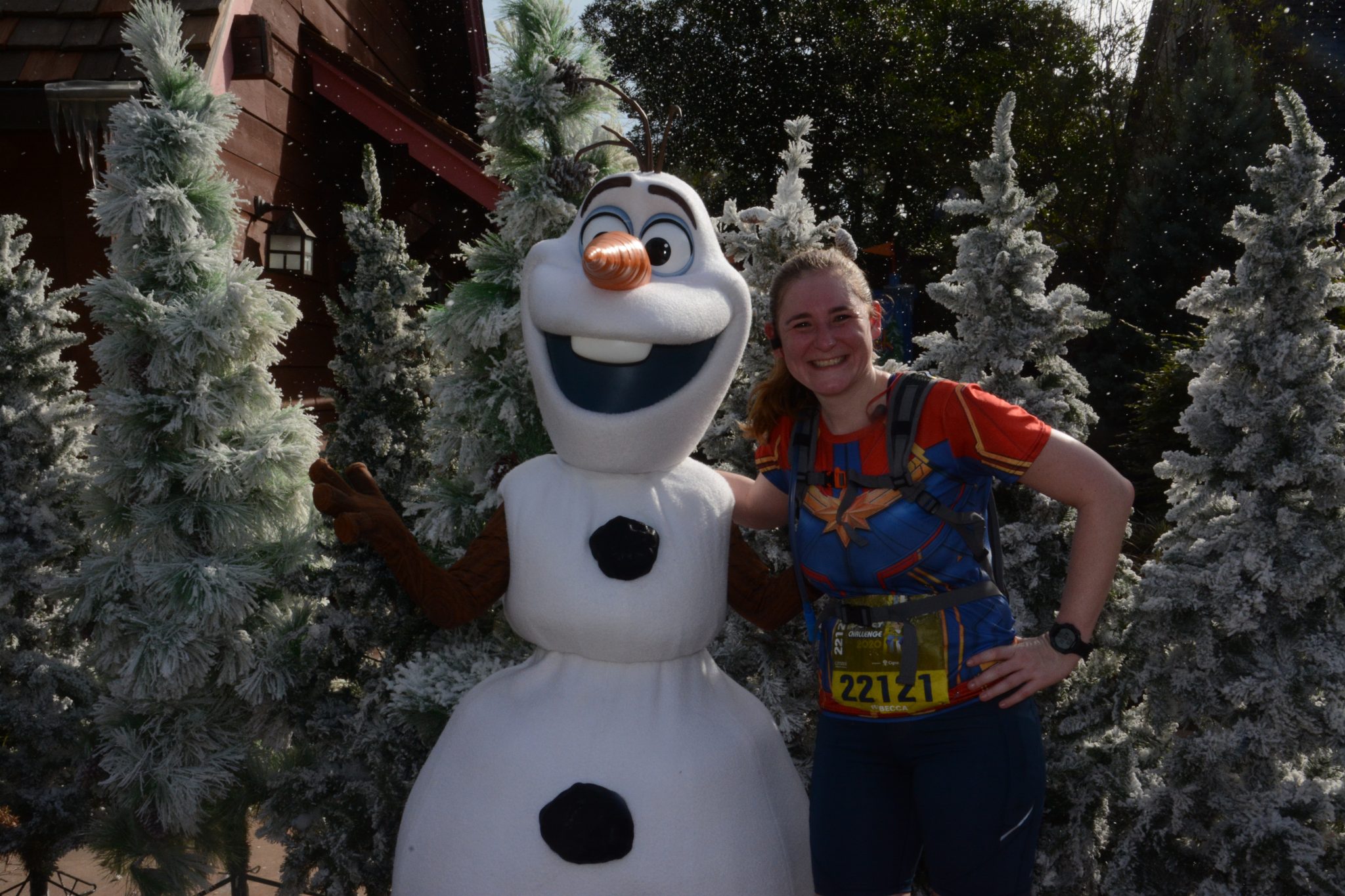 It turns out after I finished they cut out the Blizzard Beach portion of the race and shortened the marathon because of the heat. They wanted people to get done faster because so many were passing out or having medical issues. That’s a tough call but was absolutely the right choice given the conditions. I am thankful I got the full 26.2 miles in though.

Then was a slow trek to Hollywood Studios. Right before entering the park there was absolutely no wait for a hippo from Fantasia, so of course I grabbed a picture! Back in the park was better, with lots of crowds (including just people going about their day in the theme park!). 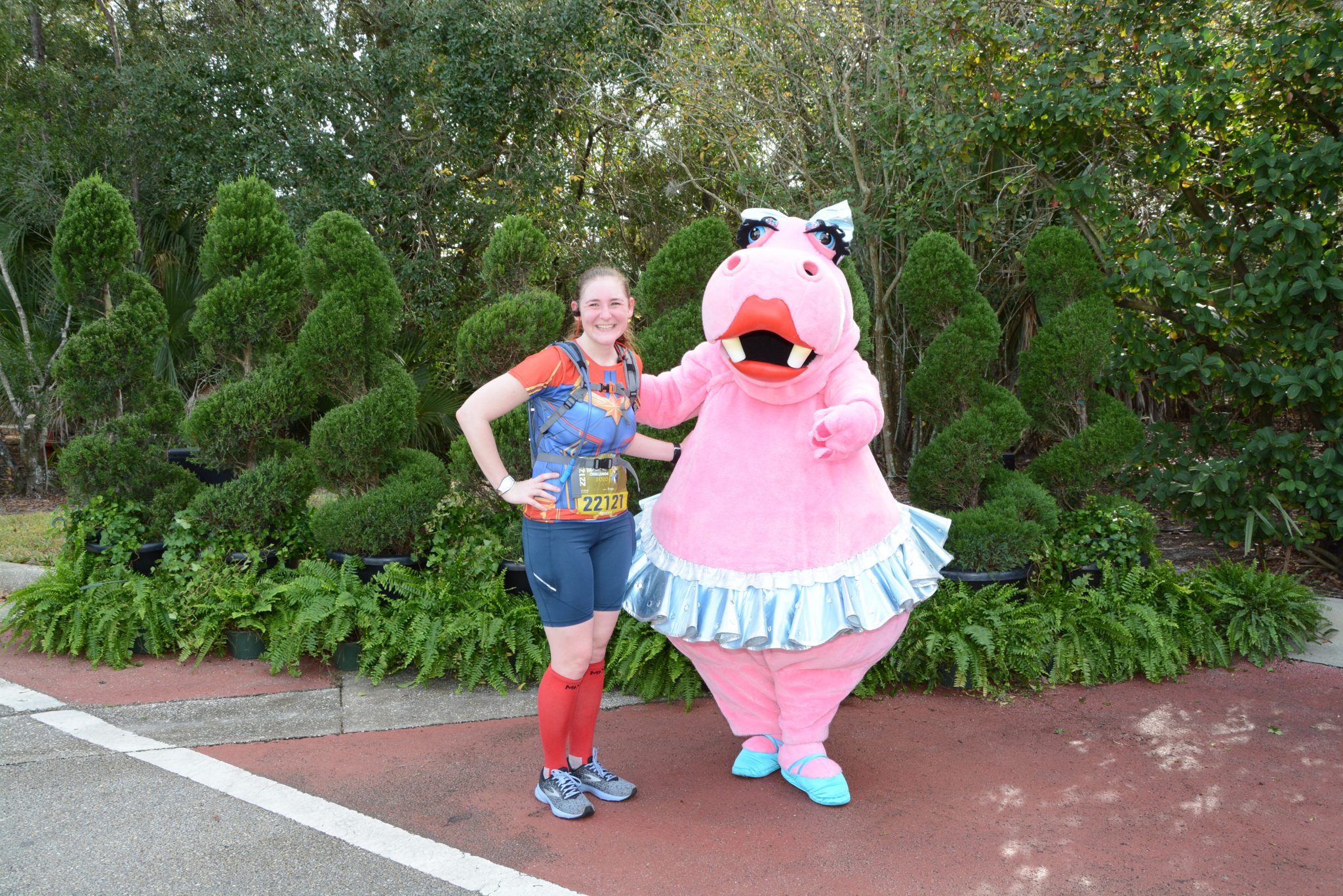 I was slow but I was still moving. My back hurt but it’s been worse. My feet hurt. To the walkway from Hollywood Studios to the Boardwalk, and then onto the back entrance of Epcot.

Perhaps the best feeling of the race for me was entering Epcot’s World Showcase. It was right around mile 25. When I entered the park they were playing Seize the Day from Newsies. I knew I only had about a mile left and it all hit me there. I was doing it, it was truly magical, and I was doing it well. I felt stronger than I ever have in my life.

Eventually the finish line was in sight and I crossed it. I crossed it with a time of 5:29:07, which blew me away – especially considering the heat conditions. When I had run my only other marathon my time was 6:21. My goal was just to finish under 6 hours. If I could do around 5:30 I would be beyond thrilled. To finish under 5:30 was an insane achievement for me. 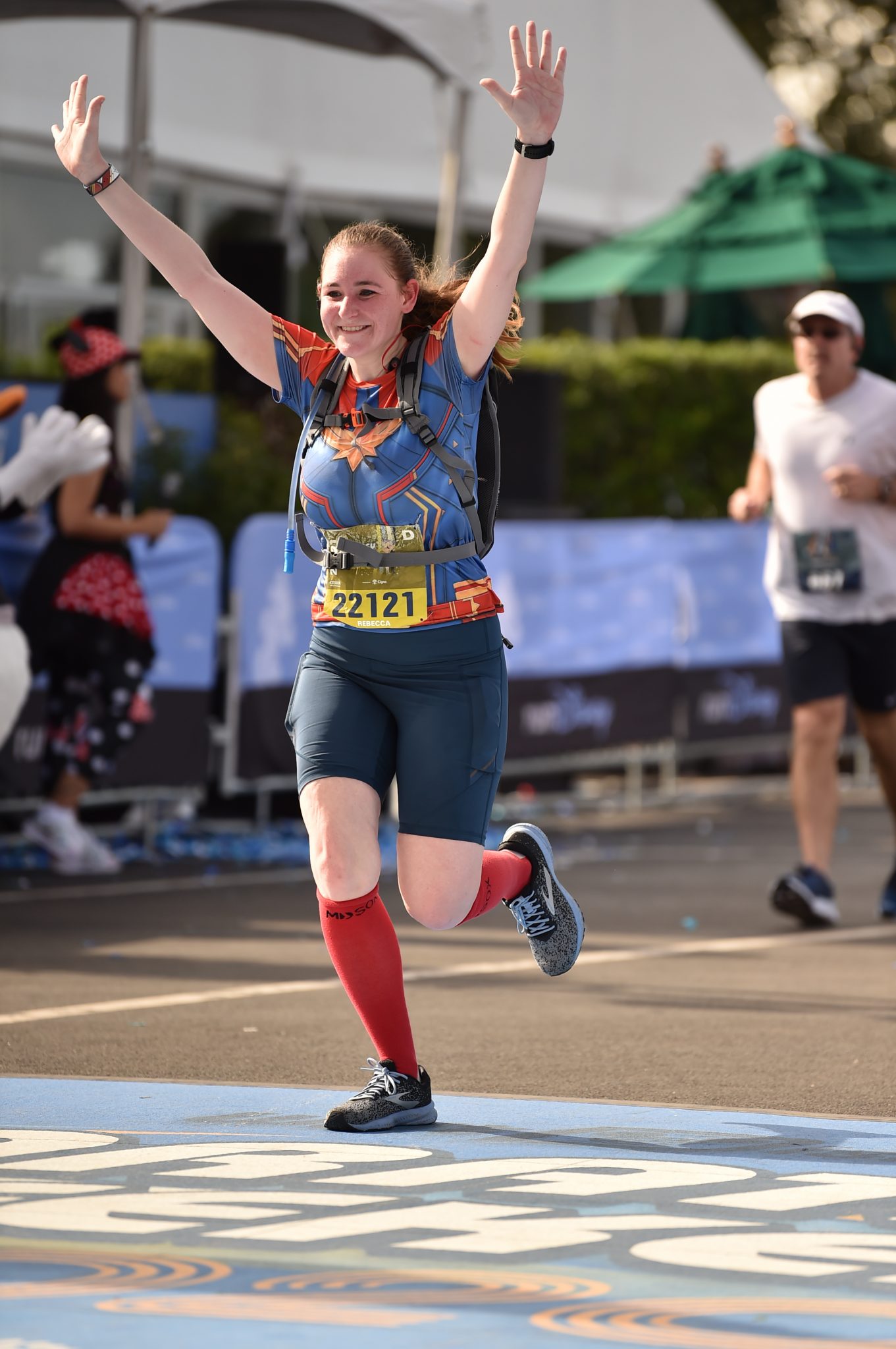 I got my medals – all of them. Disney World Marathon, Goofy Challenge, Dopey Challenge. I found my friends and rejoiced. I was so, so happy they’d come to support me. It means everything. I sat for awhile and celebrated with a beer. 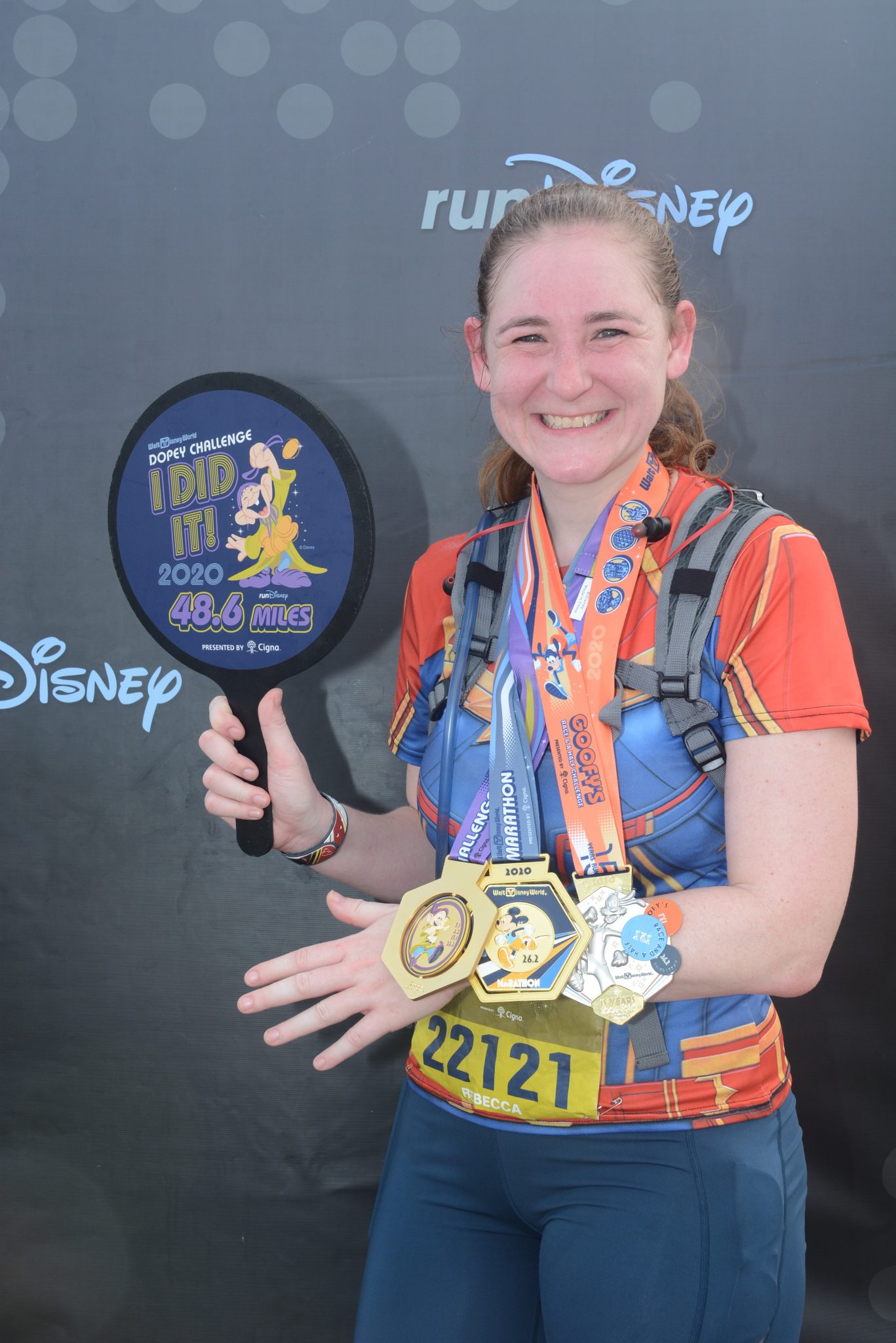 And then I went back to Old Key West to shower, nap, and get ready to celebrate! 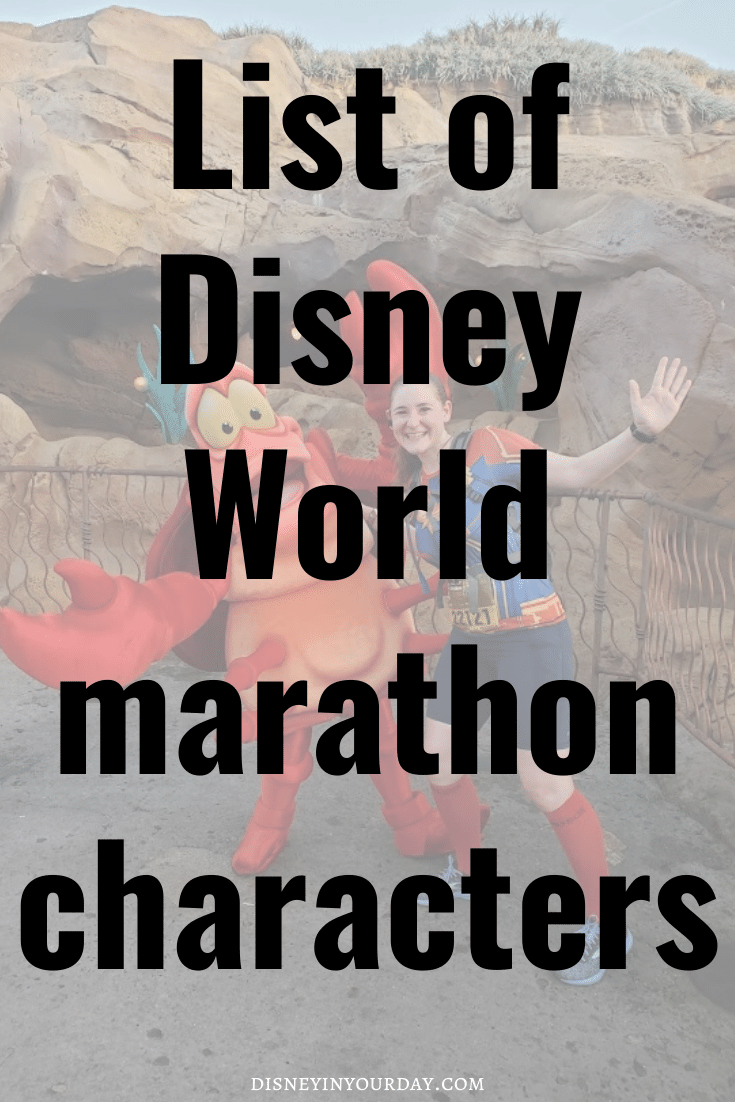 Have you ever experienced the Disney World marathon? Would you try a RunDisney event?