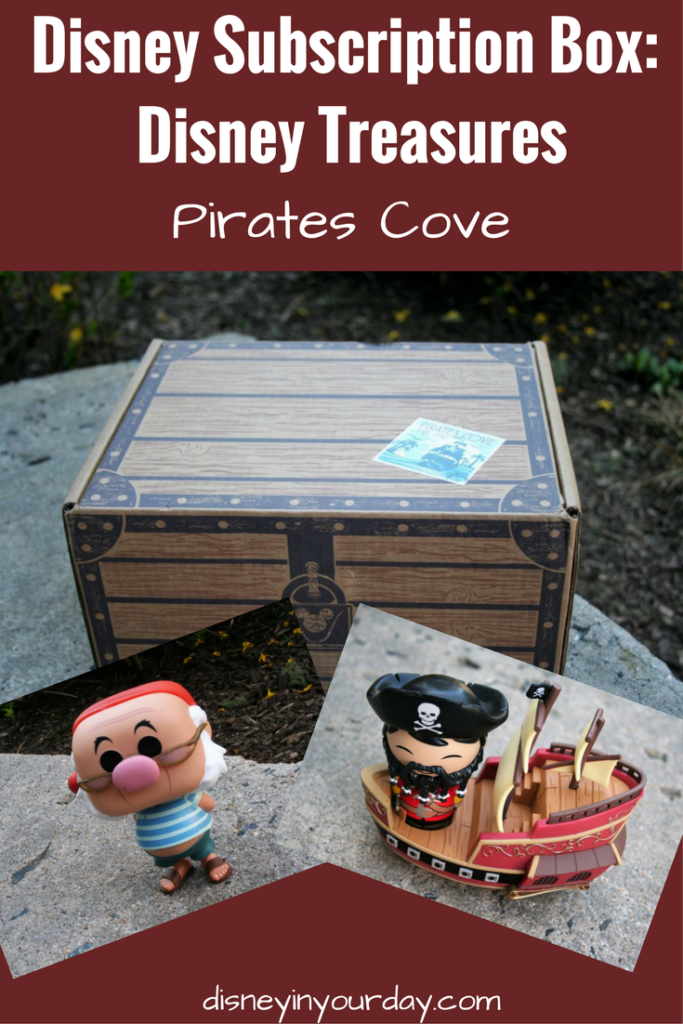 Disney and Funko have recently partnered to make a new Disney-themed subscription box.  If you’re not familiar with Funko, they are the company that makes those POP Vinyls – the little figures with the big heads.  Disney POPs are very popular, so a partnership for a subscription box between these two companies was very exciting news for many!  The boxes are delivered every other month and include classic Disney and Disney theme park themed items, and will always have at least 1 exclusive POP vinyl, in addition to other goodies. 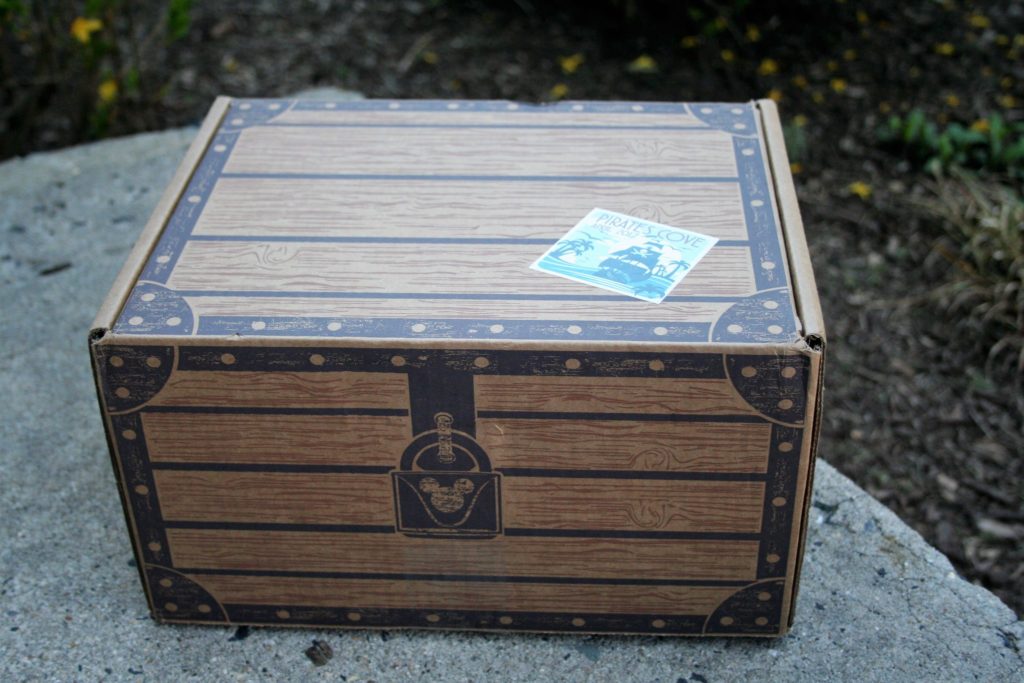 Each month has a theme, and for April the theme was Pirates Cove.  I will admit that I wasn’t super pumped about the first theme because pirates aren’t really my favorite thing or my favorite part of Disney.  But I had subscribed for a full year to get the discount and of course I wanted to get the first box to review for the blog, so I jumped on in!  And I will admit that despite it not really being my favorite, the box was extremely well themed – even from the outside! 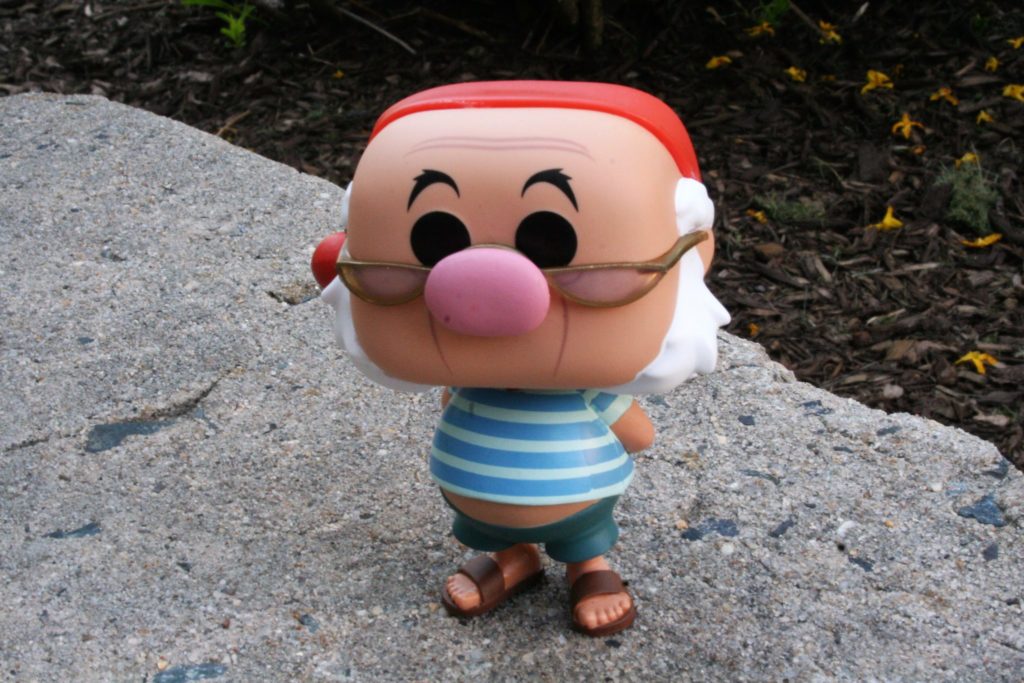 The exclusive POP in this box was Smee.  Very fitting of course for the Pirates theme, and I like that it was something classic Disney.  Can’t really go wrong with that!  Apparently they hadn’t made a Smee POP vinyl prior to this, so it was unique to the Disney Treasures box.  Smee has joined the other POPs on my fireplace! 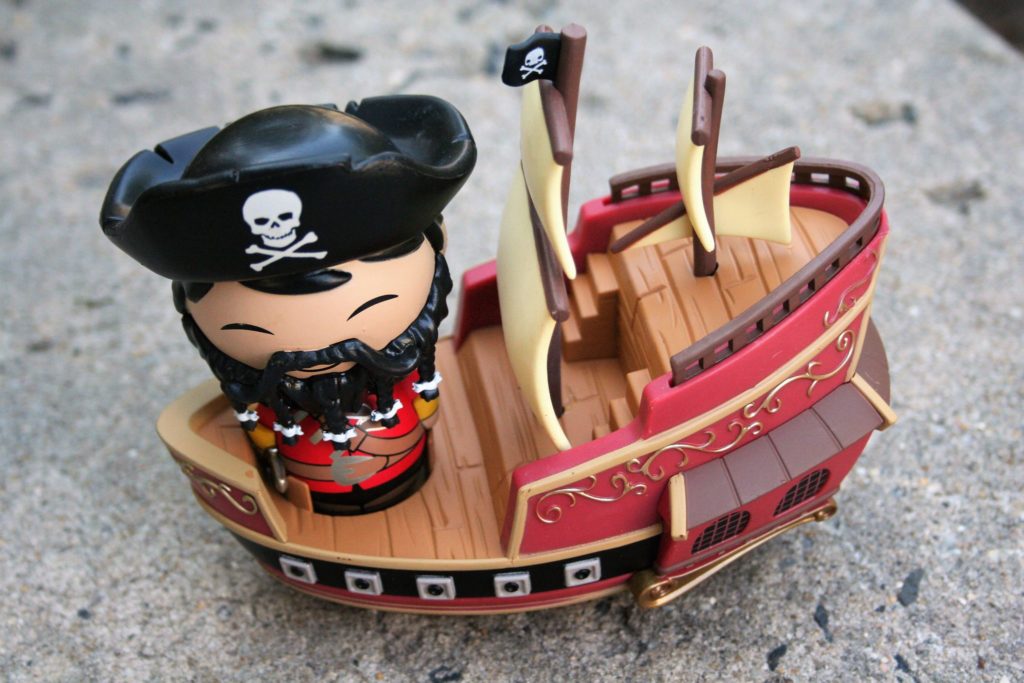 Another product that Funko makes is the Dorbz, which are a little smaller than the POP vinyls but just as adorable.  This box had a Dorbz pirate ship with a cute little captain on a pirate ship!  It’s really quite nice if you collect these sorts of things.  I like it but not being a huge pirates fan and already having quite a lot of stuff I don’t really need it, so I’m hoping I can find a friend or someone who might want to buy it off of me.

These pretty tin was also in the box.  I loved the artwork on this.  Each side of the tin had a different scene from the Pirates of the Caribbean ride.  I love the theme park tie-ins and will definitely try to find a good use for this tin! 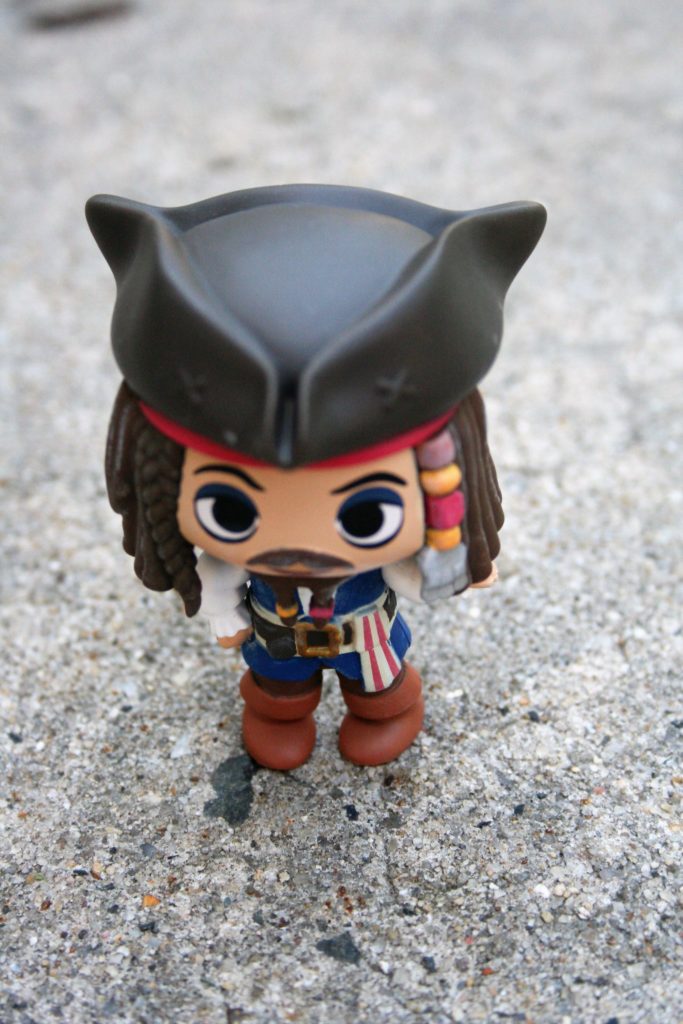 And there was also something inside the tin.  A mini Jack Sparrow!  Perfect timing with the new Pirates of the Caribbean movie coming out soon. 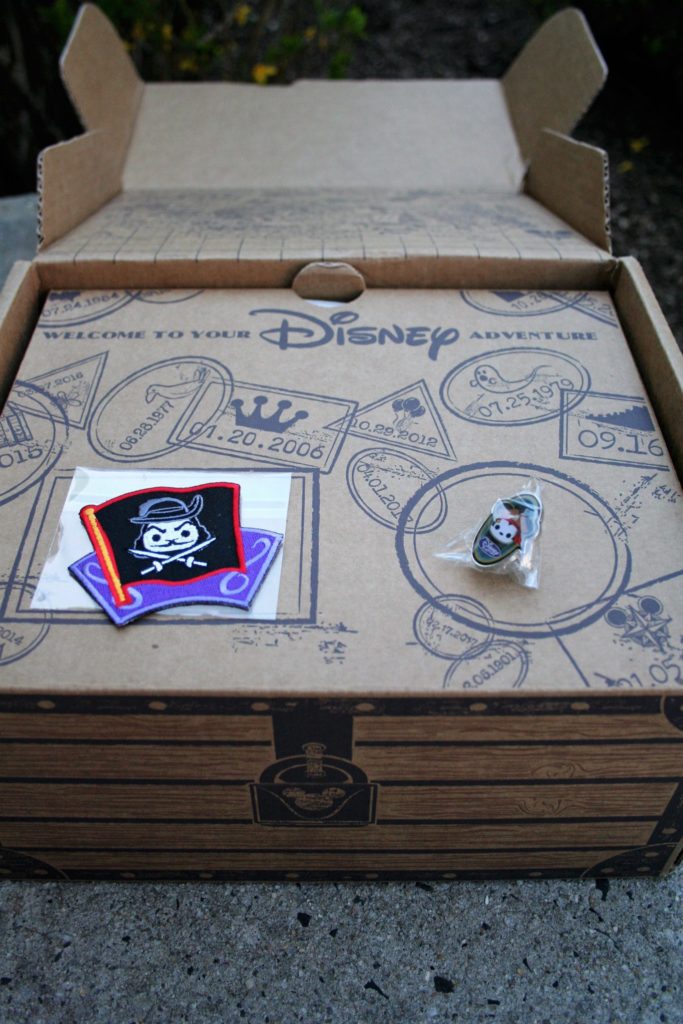 Finally, every box looks like it will include a patch and a pin.  This month’s pirate themed items included a patch with Captain Hook on a pirate flag and a version of Pirate Mickey on the pin. 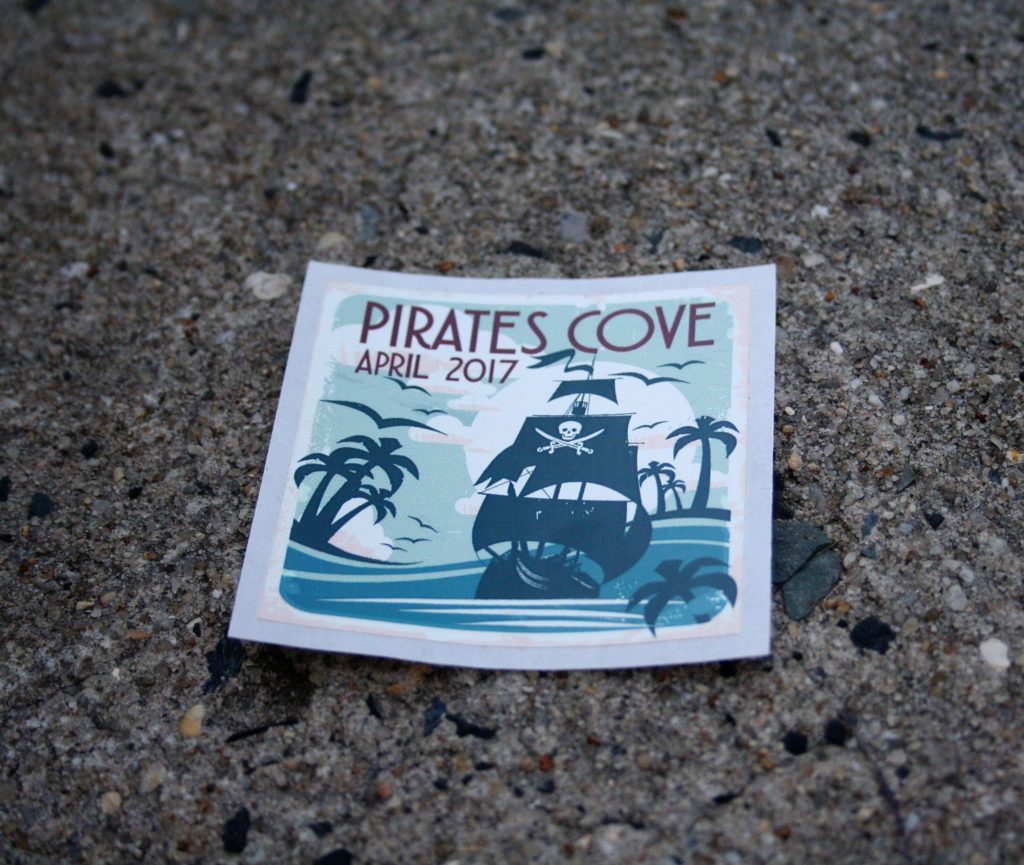 There was also this cute sticker inside the box.  There had been one of these stickers attached to the outside of the box, but they put an extra one in as well. 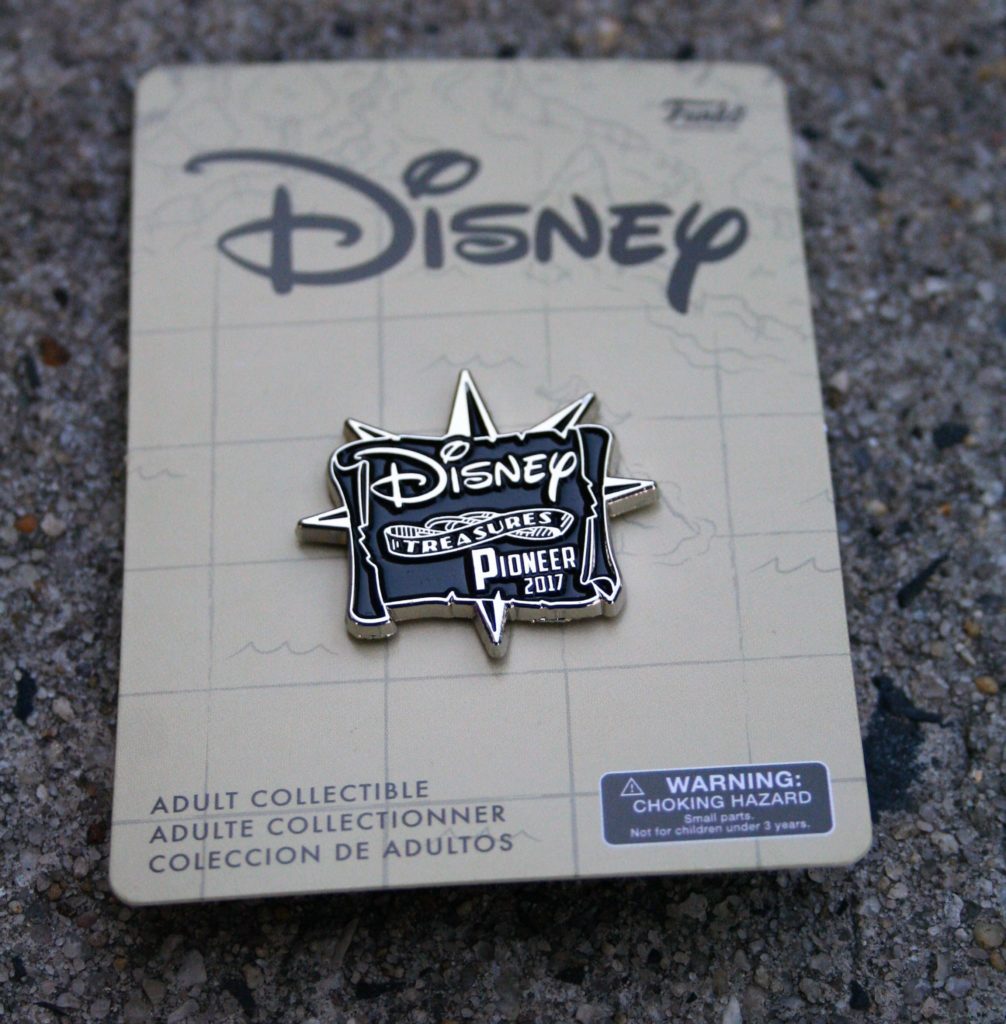 Because I subscribed right at the beginning of when the box started, I also got a special pin.  It’s the Disney Treasures “pioneer” pin.  And since I signed up for the full year’s subscription I’m supposed to get a special anniversary gift too.  I guess that will be coming with the sixth box at the end of the year. 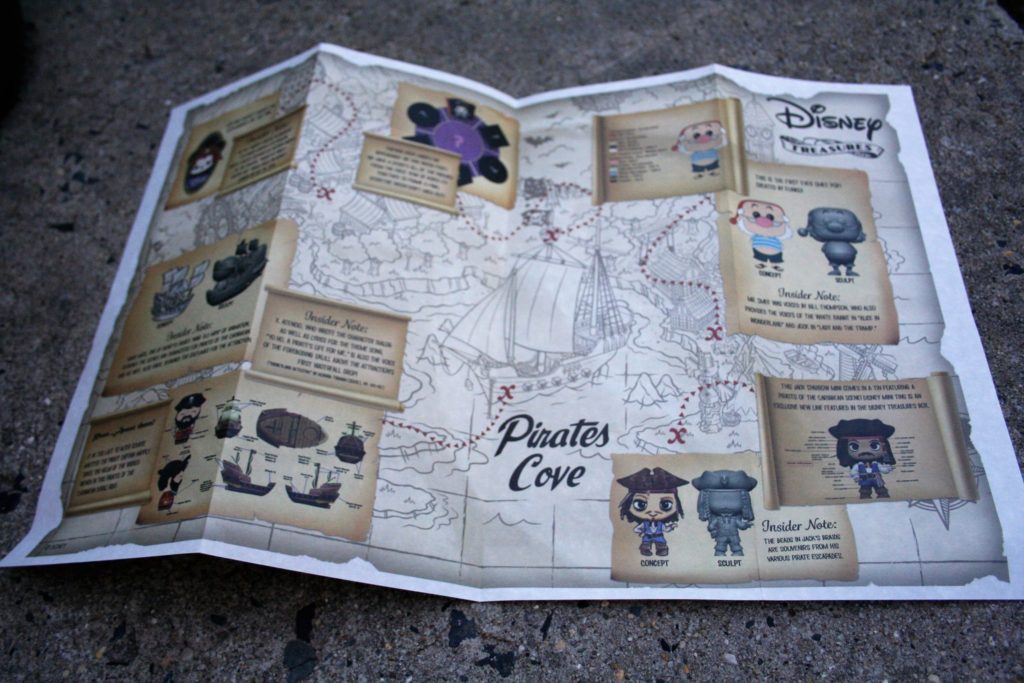 I just really loved the detailing on this box.  This pirate map was included to show all of the items that you got in the box.  It talked about how some of the exclusive items were designed and created, and also shared some “insider facts” about the Pirates movies, theme parks, etc.  I thought it was a really nice touch.

I think it’s a really well put-together box, and worth the price if you like Disney and Funko products!  Next month’s box is called “Festival of Friends,” and will be featuring an exclusive Dumbo with Timothy Mouse POP.  It looks really cute and I’m excited for the next one!  Boxes are $30 per month if you do a “pay as you go option” – it’s slightly discounted if you pay for multiple boxes at once.  You can still sign up for Festival of Friends at Disney Treasures!

What’s your favorite item from the Pirates box?