The day had finally come, the cruise we’d been looking forward to for almost 2 years – our Disney cruise to Alaska! We left on a Monday but had flown out to Vancouver two days earlier. We spent two days exploring the city and had a great time there. We checked out of our hotel Monday morning, took a cab to the cruise terminal, and were there and ready to get on board!

Our boarding time was 11:30am but they didn’t start loading anyone on the ship until closer to noon. We probably arrived at 10:30, checked in, went through customs, and then waited around for awhile. Luckily they started bringing out characters so I was able to get a photo with Mickey even before getting on board! 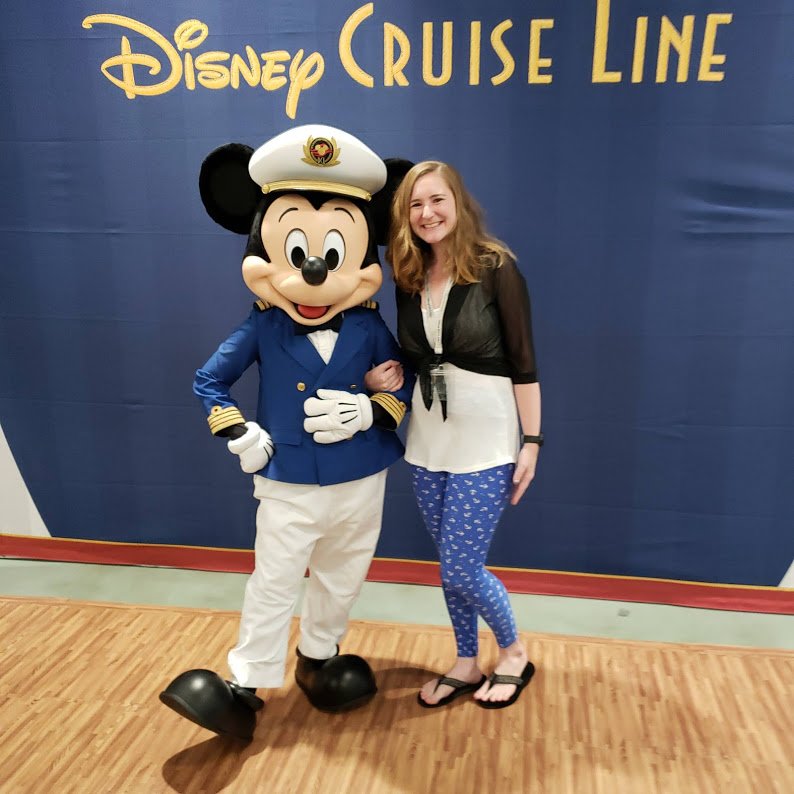 When we walked into the lobby they announce your family and welcome you to the ship. We were pretty hungry so lunch was our first stop! We chose to do the buffet over the sit down lunch and headed up to floor 9 to Cabanas. There was a wide variety of tasty food and I probably ate too much but it was great. We also grabbed the drink of the day, which comes in a souvenir cup which you can reuse throughout the trip for a discount on the drink of the day. 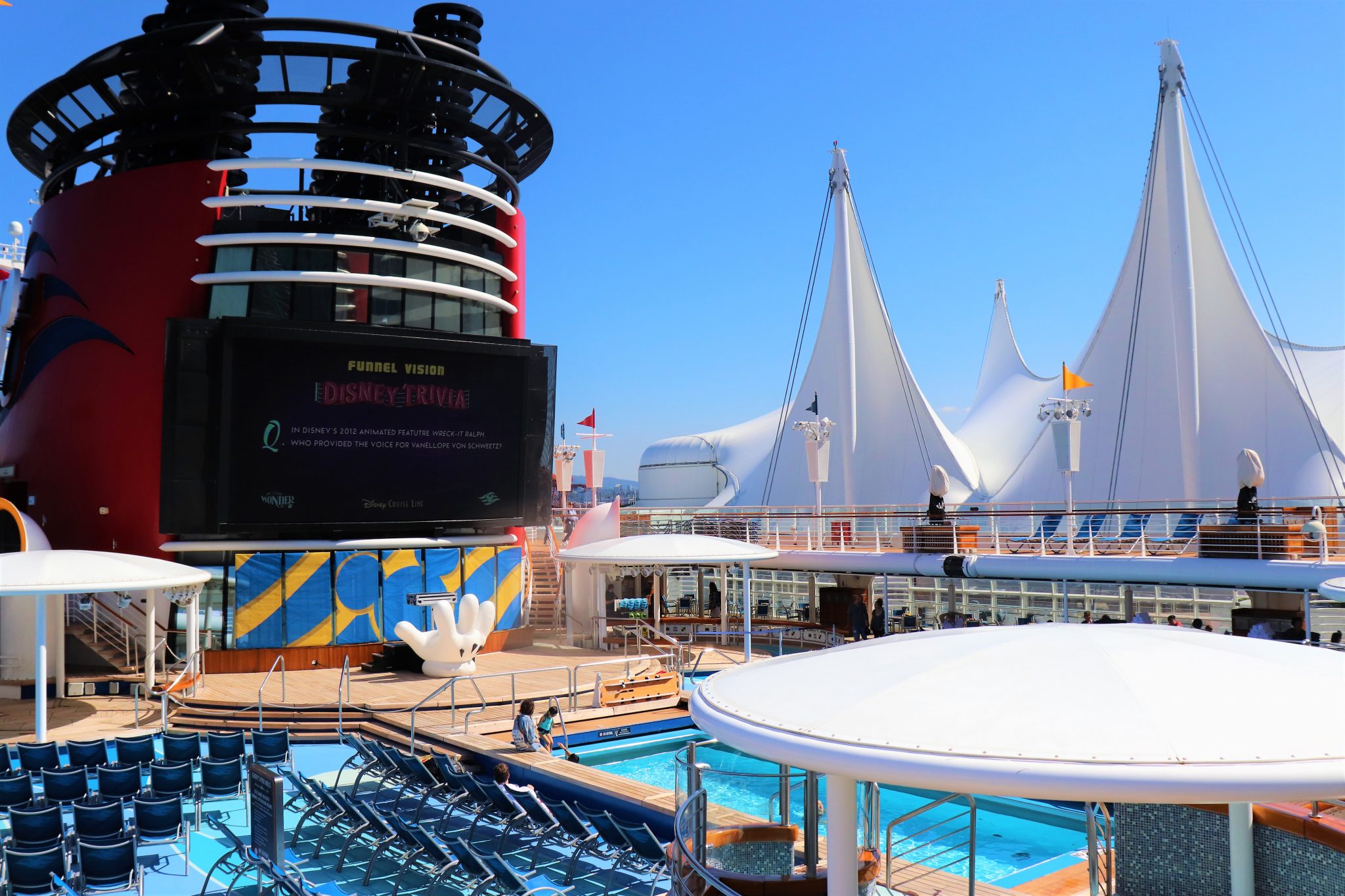 By then it was around 1:30 and our room was ready so we went to check it out! It was our first time staying in a room with a verandah – we’d only done cruises with inside staterooms before. The room was absolutely gorgeous and I fell in love with the verandah. It was a navigator’s verandah, which means It has a big open window but is also partially enclosed. It was perfect for Alaska when you want to see all the beauty outside but you may not want to just sit out on a big open area because it’s a bit chilly. 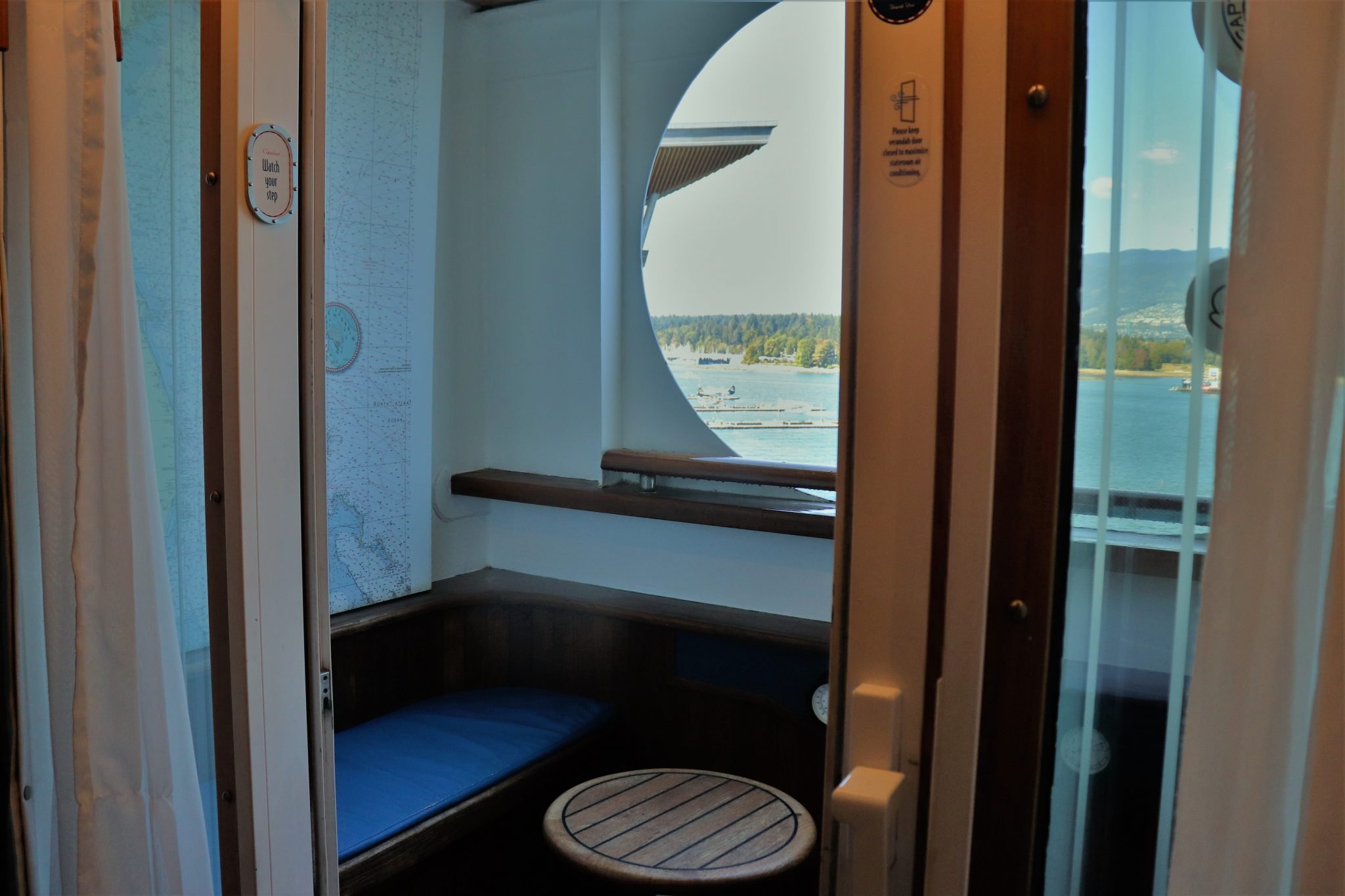 We also had some presents in the room! My amazing travel agency owners had the room decorated which was so fun to walk into (and another perk of booking with a travel agent – if you’re thinking about an Alaska cruise or any other trip contact me today!). I had ordered a bottle of wine for Jason and myself for our anniversary. We also had Happily Ever After buttons from Disney as well as some on board credit to spend since we had booked this cruise while on the last one. 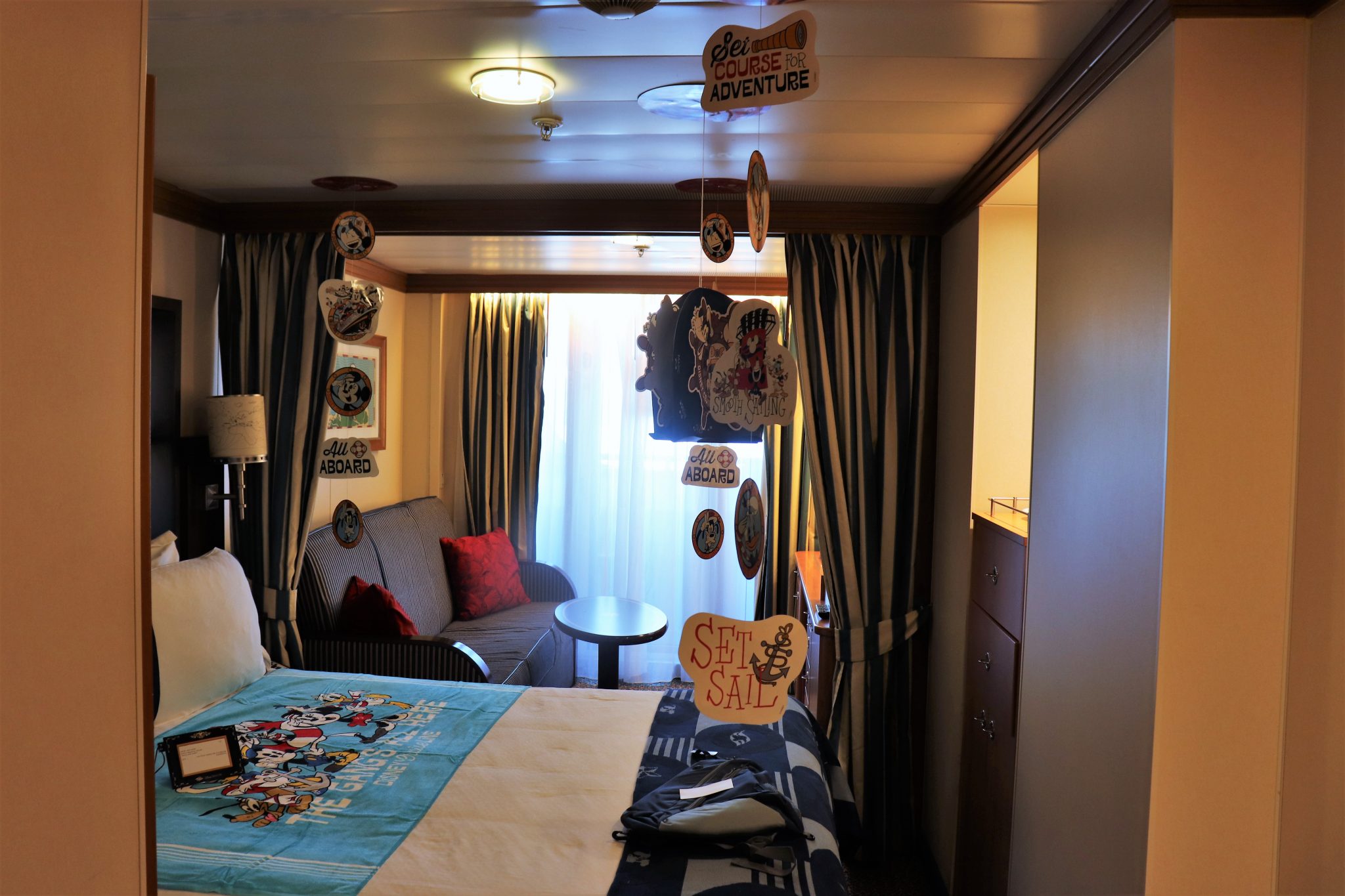 While in the room we unpacked our carry-ons (the luggage hadn’t arrived yet) and I took a quick nap. I never really adjusted to the time difference and was up at 6am pretty much every morning. That was great for getting stuff done early and the days we were in port early, but by the time some of the fun stuff was happening later at night I was too tired to stay up. After my nap we went to the Crown and Fin pub for a meet-up with people from our facebook group, and then we went to the spa to sign up for the Rainforest Room. After that we headed back to the room to unpack our luggage and then it was up to the deck to sail away! 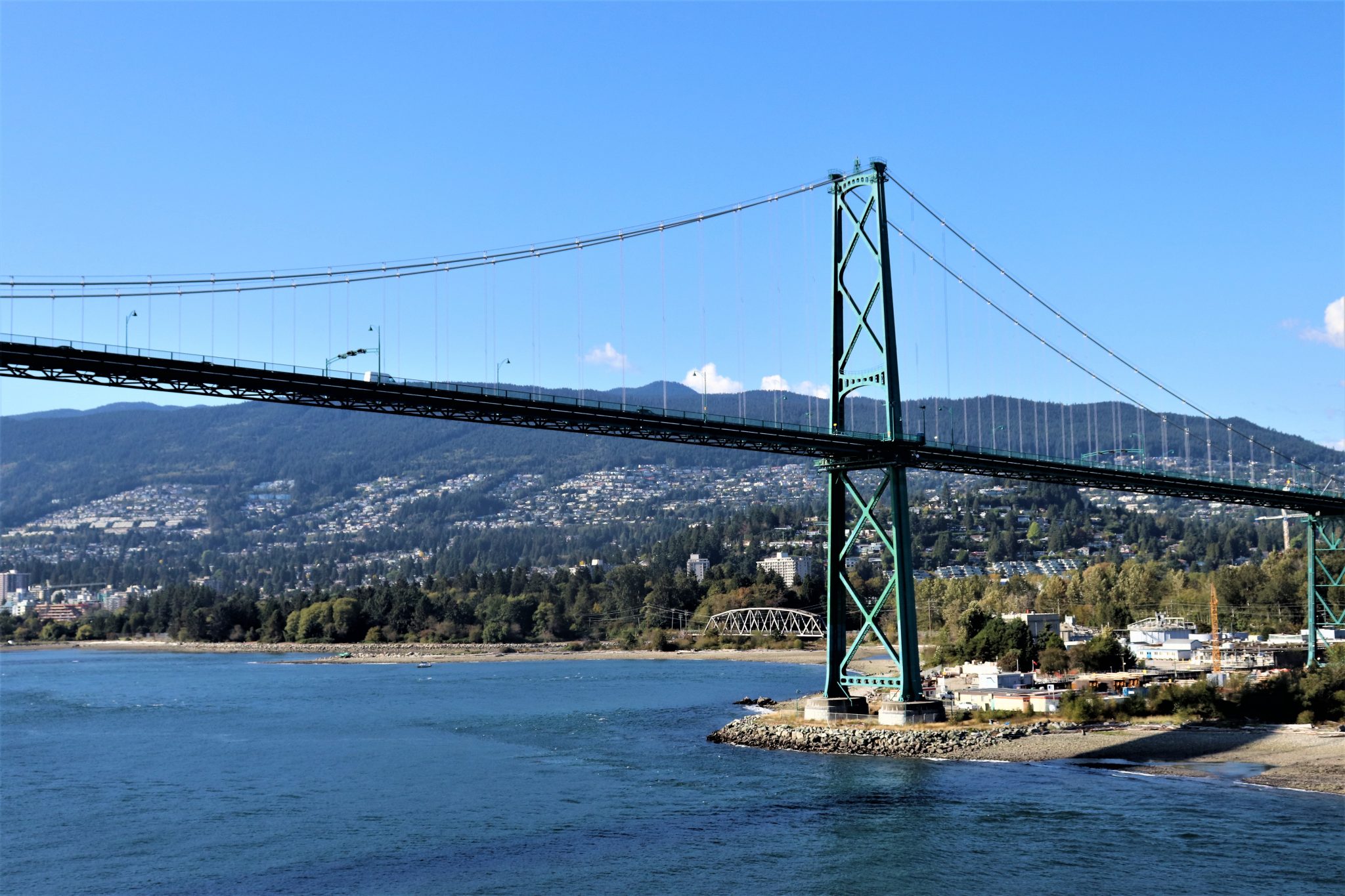 They do a “sail a-wave” party on the deck with music, dancing, and other fun things. We found a nice area of the ship where we could watch all the scenery going by – leaving Vancouver behind, sailing under the bridge, and watching all the mountains in the distance. Once we’d done that for a bit we headed up to make use of our Rainforest Room pass for the first time! This rainforest room was identical to the one on the Magic. It has tiled heated lounge chairs, steam rooms, and different showers. The chairs are the best for just relaxing and reading a book.

We ended up skipping the show to relax in the Rainforest Room (it was a variety act), and then got ready for dinner. Our first meal was in Animator’s Palate and we shared a table with our friends Kelcie and Larry – Kelcie and I had known each other online for a number of years but this was the first time we met in person! 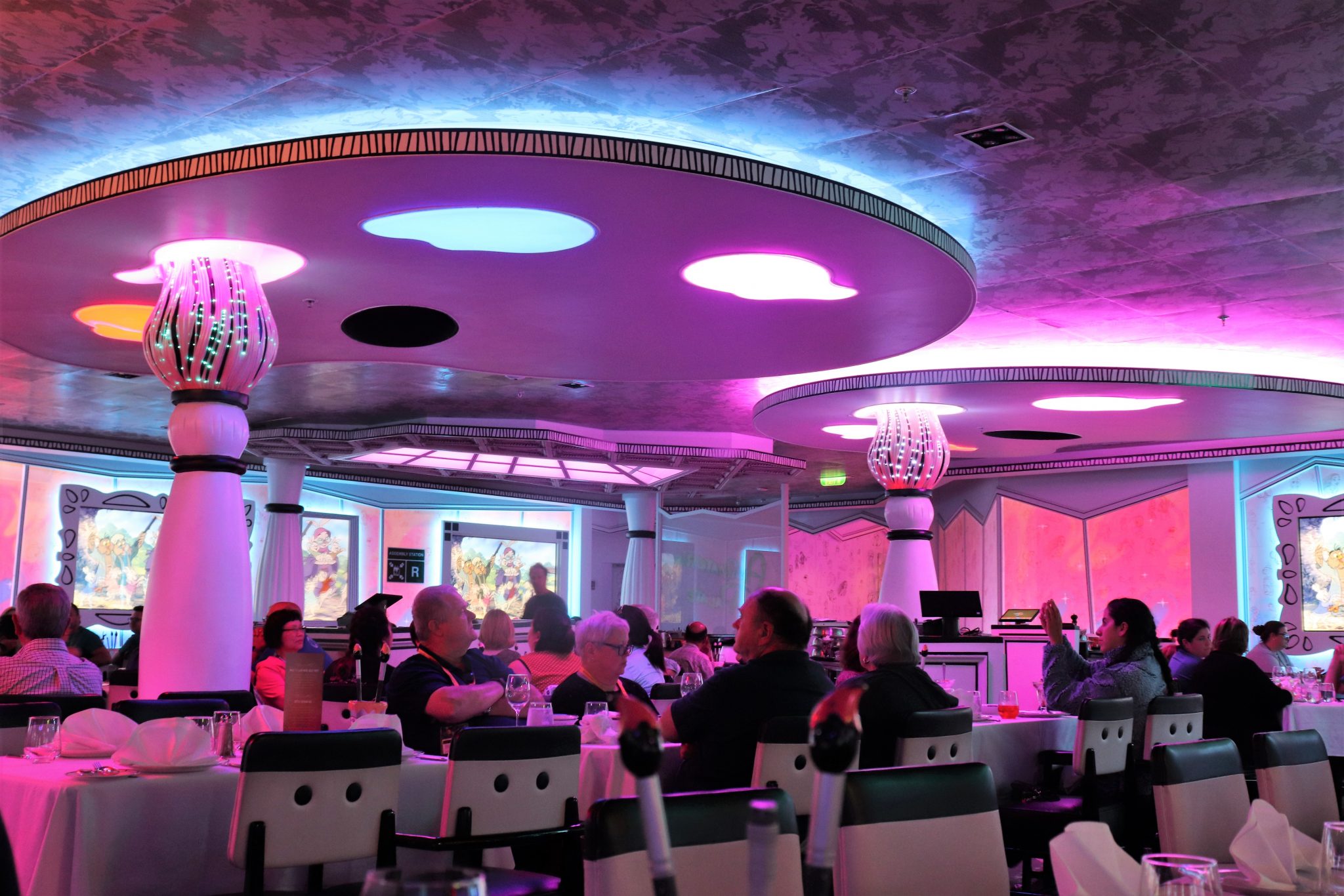 Animator’s Palate is a cool restaurant that feels very Disney. There are screens on the walls, and this night they were “animating” different Disney characters on them, so it was fun to watch and try to guess which character would appear on which screen. It was also a very tasty meal. The highlight for me was the appetizer of pasta pursettes in champagne sauce, though the filet was very good too. 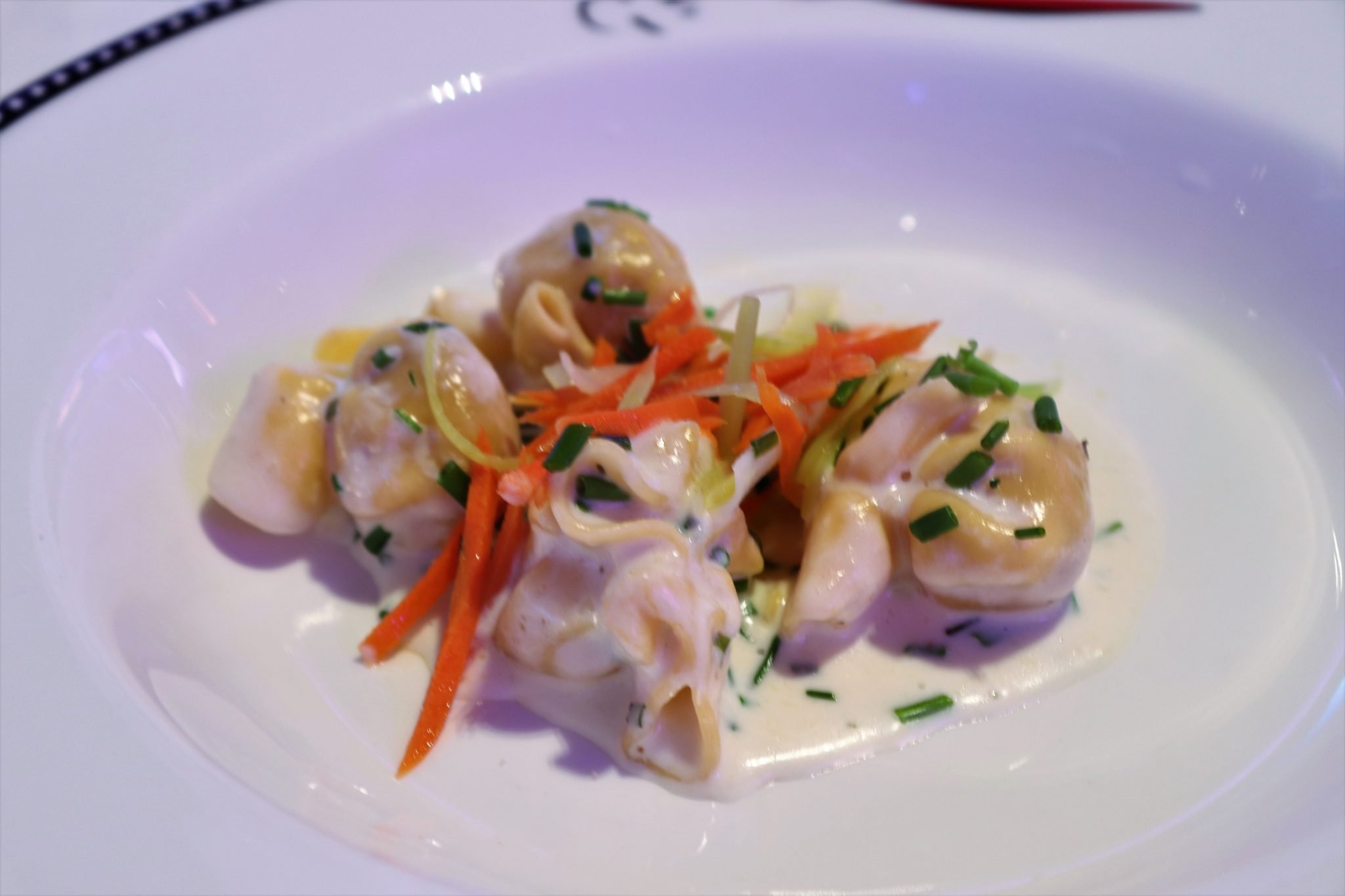 We met our servers, who stay with you the entire cruise for every dinner. Arlan was a real sweetheart and a highlight throughout the trip. They go above and beyond for you, but he was also quite funny too. Kelcie said she wanted nothing for dessert… so that’s what he brought her! 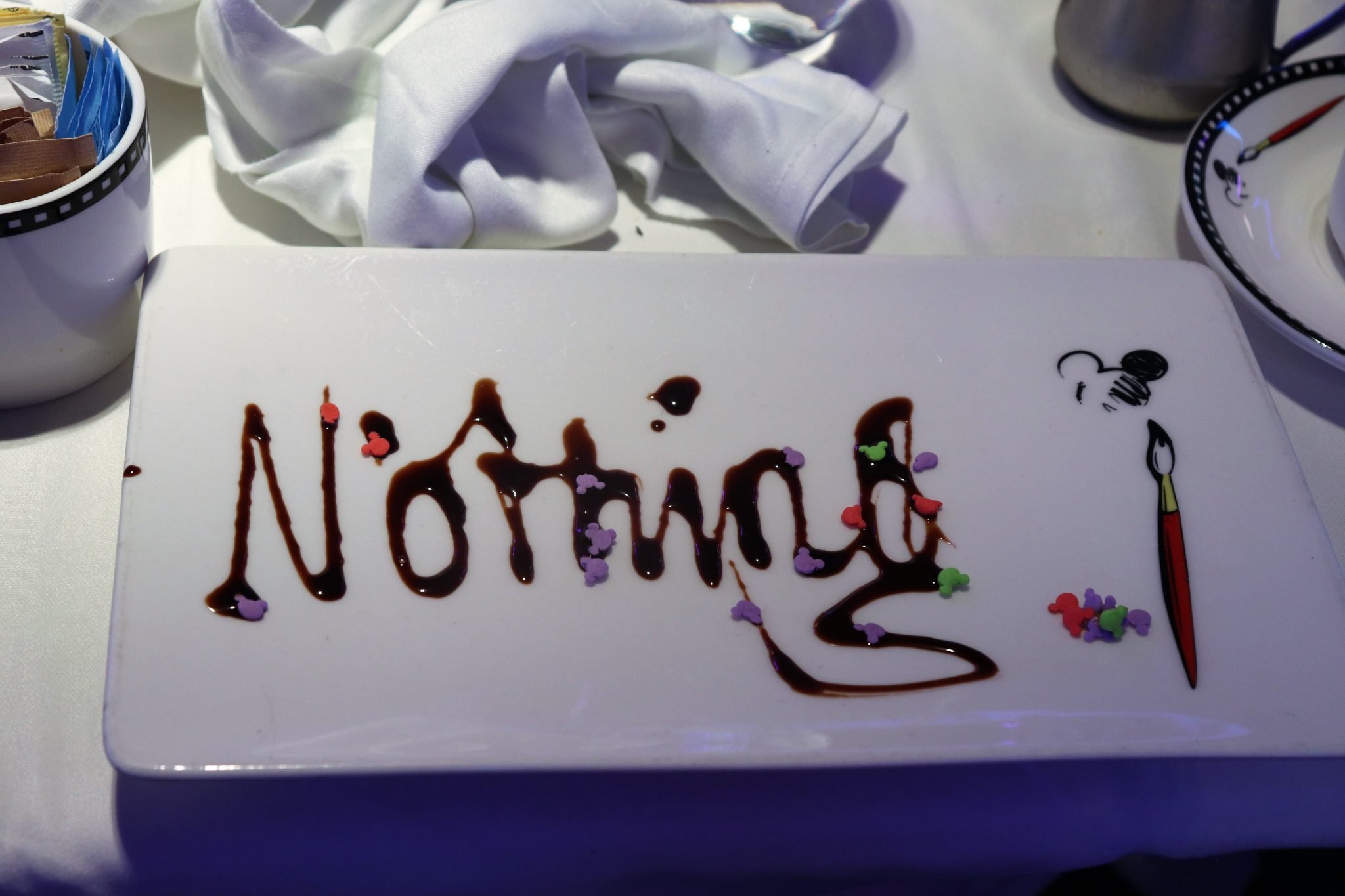 By the time we finished dinner it was past 10pm… and as much as I wanted to do more stuff I was exhausted! We had a full day at sea the next day, and it would be our anniversary, so I went to bed early. The stateroom has various Disney movies playing on the TV, so most nights we would put on a different Disney movie til we fell asleep. It was a fun start to the trip!

Have you been on a Disney Cruise? What would you be most excited about?